Most people have the intelligence to pick stocks - but not everyone has the stomach. This is especially true in a volatile stock market, as downside risks increase. Even India's mutual fund managers have become cautious about fresh stock buys, as markets grew moody in a slowing global economy. Their investments in Q2FY23 rose at the slowest rate since Q1FY22, and they preferred sectors with good potential while cutting stakes in those losing traction.

Indian indices rode turbulent seas in the past year. After touching their lows in mid-June, the Nifty 50 index and BSE Sensex gained around 18% by mid-September.

Domestic mutual funds pumped over Rs 70,000 crore into equities in Q1FY23, when valuations were comfortable. However, their buying activity slowed down to approx Rs 22,000 crore in Q2 as they became more selective. One reason was rising valuations: according to reports, Nifty 50 is trading at an average 1-yr forward PE of around 20X, which is 22% higher than its long-term average of 16X.

The stock market is commanding a premium despite a series of downgrades for India’s GDP growth rate in FY23 and in the earnings of top companies. This has kept domestic funds on the fence.

In this week’s edition, we take a look at the top companies and sectors which mutual funds are still bullish on, buying significant equity stakes on a QoQ basis in Q2FY23. We also analyze sectors that saw intense selling action.

Mutual funds pick up over 2.5% stake in key small and mid-cap companies

Mutual funds led by SBI MF bought over 6% stake in auto ancillary player Sona BLW Precision and construction company G R Infraprojects,  in Q2FY23. This buying activity specifically took place as the promoters of these firms sold off partial stakes in the open market. Triveni Turbine saw its promoters selling over 11.5% stake in Q2, after which FIIs and domestic mutual funds increased their holdings in the company. 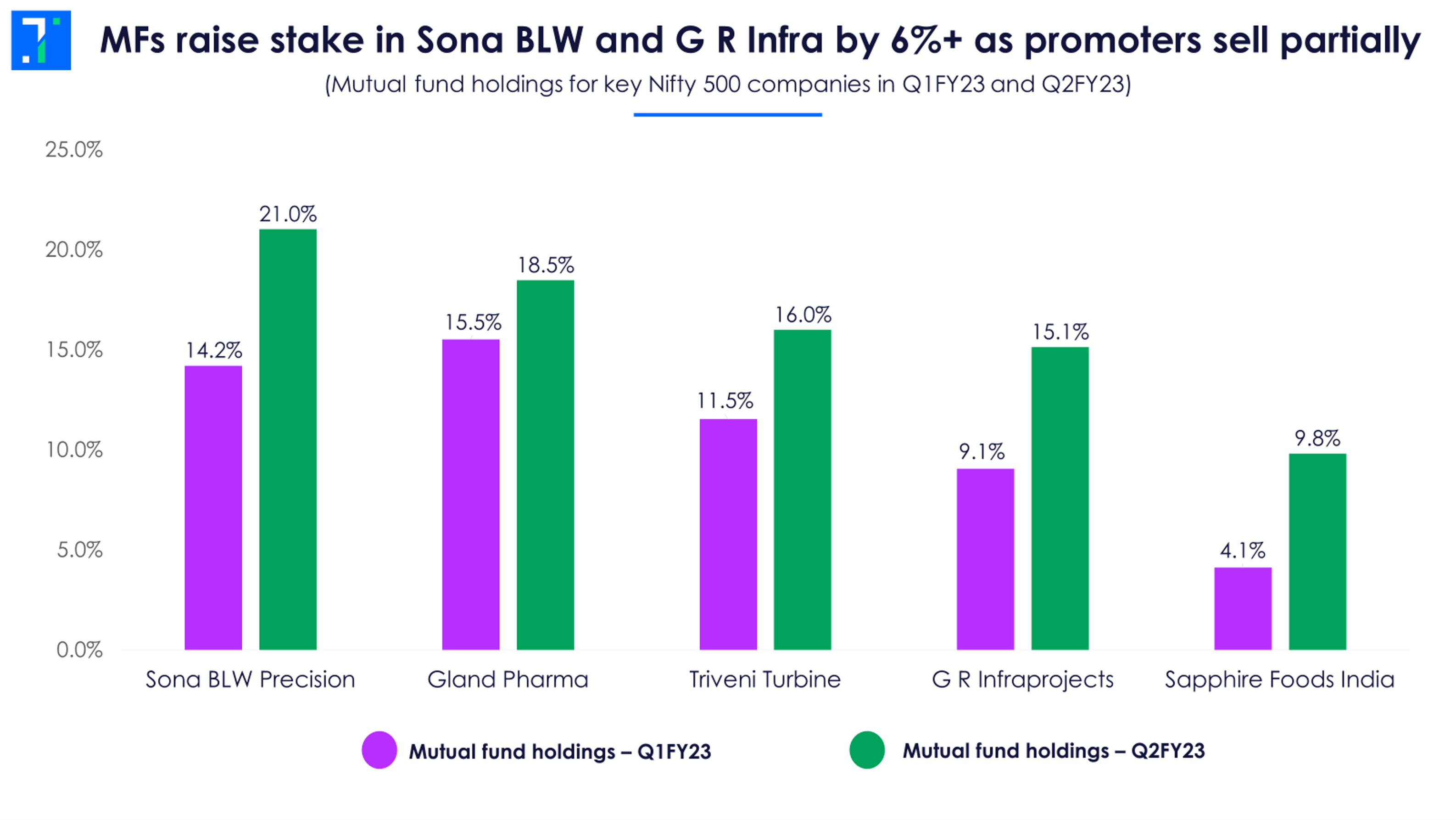 MFs led by Nippon India funds, Mirae asset funds and ICICI Prudential funds picked up 2.9% stake in Gland Pharma. Notably, this company lost over 25% of its value in Q2 on intense selling by foreign and retail investors. The financial stress on its promoter entity, Fosun International, spooked markets.

Passenger and commercial vehicle makers saw a robust rise in their wholesales in the first two quarters of FY23 on the back of healthy festive demand and easing semiconductor supplies. However, two-wheeler makers are yet to see the sales levels of the pre-covid era. 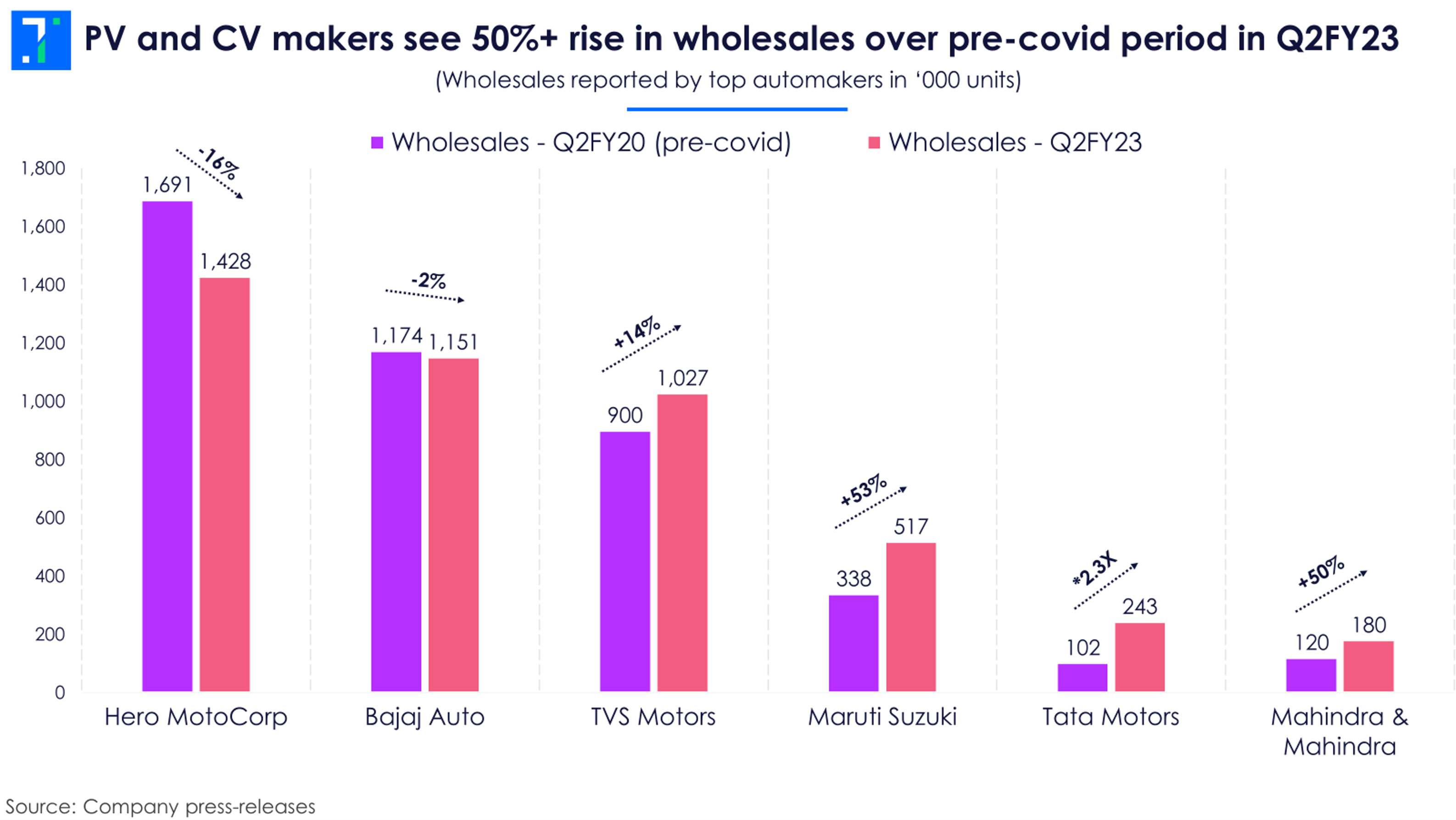 Prices of key base metals used in auto manufacturing like steel, aluminium and copper cooled off by 25-35% from the highs of March 2022. Rising sales volumes and lower metal costs helped the margins of auto OEMs and ancillaries.

Mutual Fund houses picked up stakes in auto majors like Maruti Suzuki and Hero MotoCorp in Q2. In fact, Maruti saw consistent buying from mutual funds between May and September 2022. Fund houses also raised their holdings in auto ancillaries like Bosch, Ceat and Sundaram Fasteners.

Banks and NBFCs are the flavour of this season for many investors. The industry saw a strong rise in their advances in both Q1 and Q2 backed by robust traction in retail loans, particularly housing, auto and personal loans. This led to healthy growth in their net interest incomes. The recent interest rate hikes also improved their net interest margins. 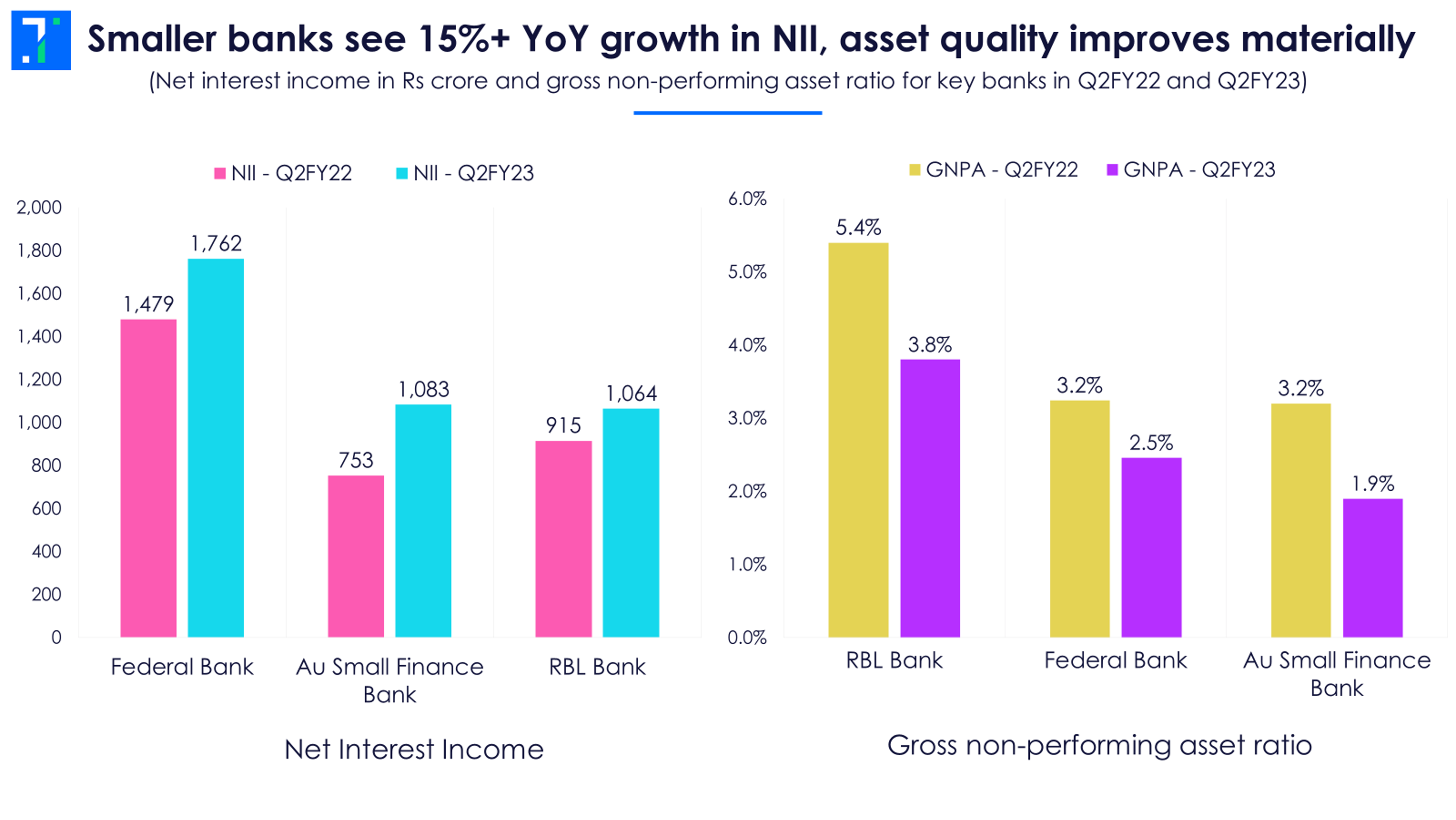 Top hospital chains saw their occupancy levels improve steadily from Q4FY22, which was  hit by the omicron wave. Their average revenue per operating bed also saw a healthy rise sequentially as their payer mix improved. But what has caught investor interest is their aggressive expansion plans, which were paused between FY20-22 due to the pandemic. 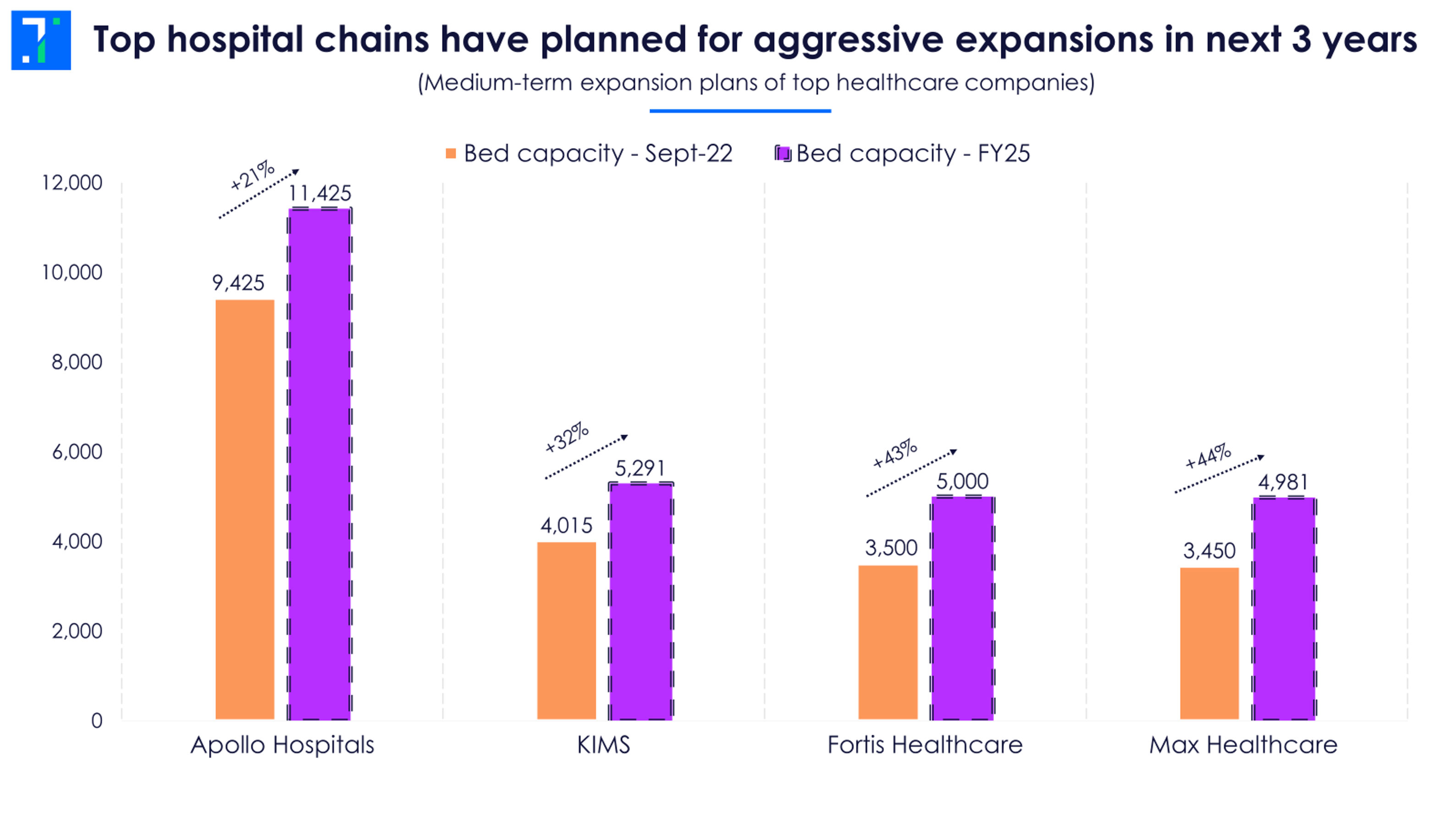 Mutual fund houses picked up a 1%+ stake in KIMS, Max Healthcare and Apollo Hospitals in Q2. MFs also bought over 12% stake in Max Healthcare in the past four quarters. These chains plan to expand their bed capacity by 20% in the next three years.

The hospitality sector saw strong demand in the summer of ’22 and the monsoon months, thanks to leisure travel and an increase in corporate events. The outlook is encouraging for this sector as highlighted by the management of Indian Hotels. The upcoming wedding and holiday season as well as the influx of foreign travellers during the winter months in H2FY23 is set to drive higher topline growth for hotels.

Heavy electrical equipment manufacturers saw strong demand from sectors like railways, mining, data centres, commercial realty, biotechnology and pharma. As a result, most companies saw their order book jump by over 30% YoY at the end of September 2022. 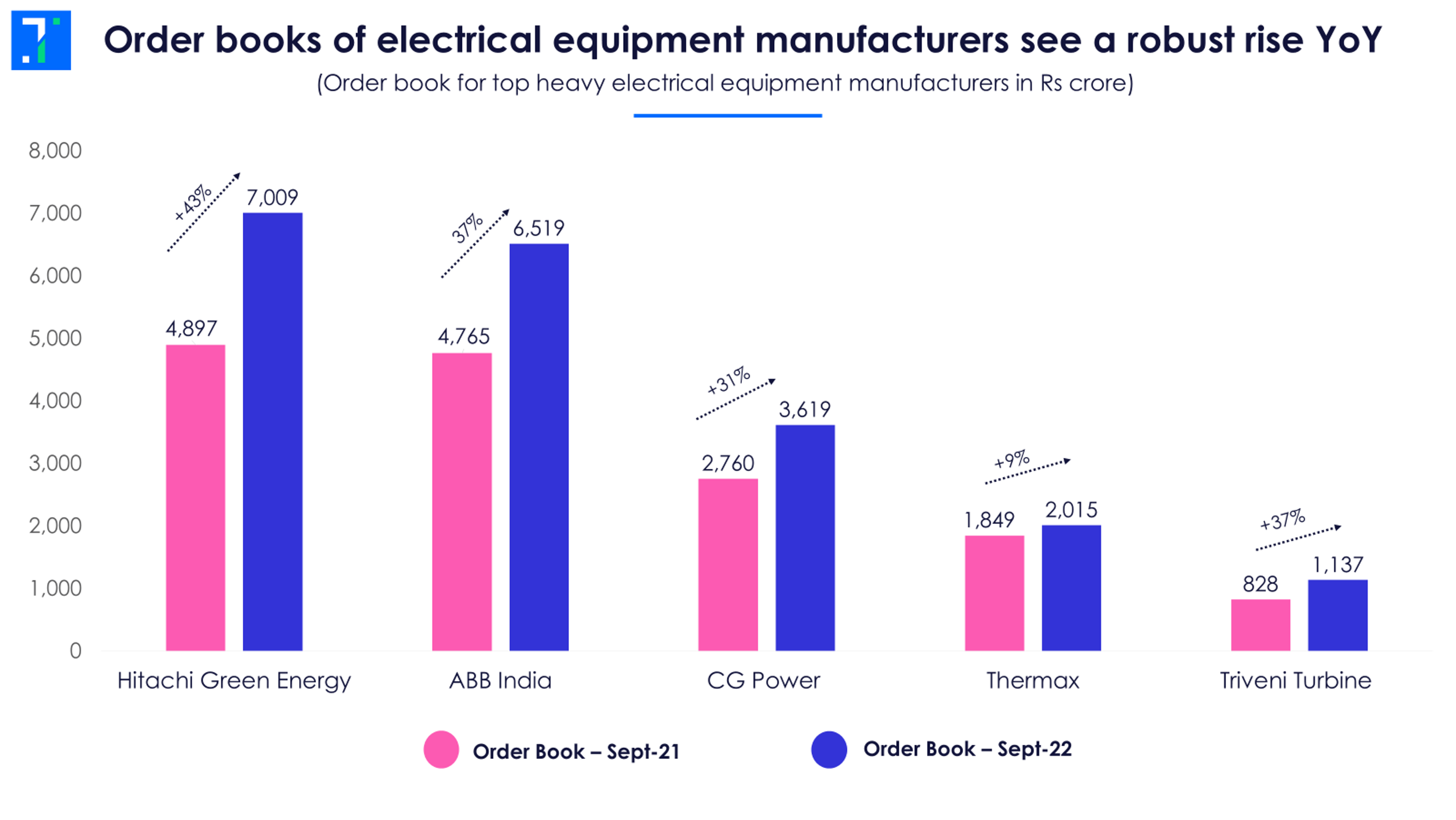 The outlook for these companies is positive, backed by the government's focus on infrastructure development, the Make-in-India initiatives and 14 PLI schemes approved for encouraging higher private capex.

Mutual funds rejig their holdings in the pharma space

Pharma players have seen muted growth in the past few quarters due to intense competition in the US Generics market. The Indian pharma market performed well in comparison. Now that companies are diversifying away from generics and into speciality drugs, hopes are high for this space.

Mutual funds have cut more than 1% stake in large-cap players like Dr. Reddy’s and Torrent Pharma. On the other hand, they have added to their holdings in mid and small-cap companies like Alkem Labs, Syngene International and Suven Pharma.

OMCs like Bharat Petroleum and Hindustan Petroleum suffered material net losses in the past two quarters. This was on account of negative marketing margins on diesel, as pump prices were not in sync with global levels. Accordingly, mutual funds sold 3% stake in BPCL in Q2. This was led by Nippon India funds, Mirae asset funds, Aditya Birla funds and Franklin India funds. 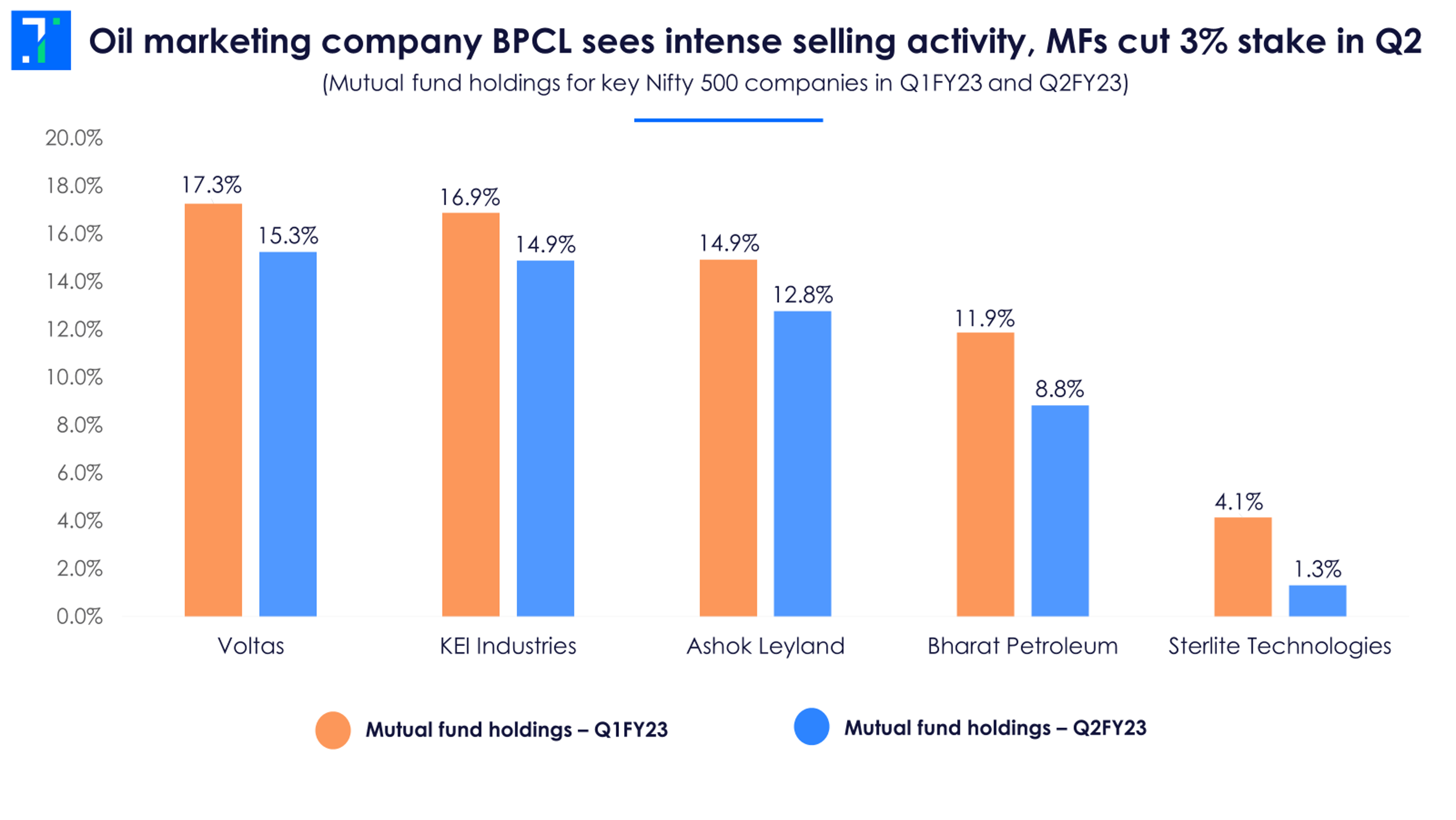 Mutual funds also cut their stake in consumer durable players like KEI Industries, Voltas and Orient Electric. Higher inflation has impacted the demand in mass market segments of these companies in the past few quarters.

Correction in metal prices and higher input costs led to a substantial contraction in the EBITDA of top steel and aluminium producers in H1FY23. Subdued demand, particularly from China and other developed nations, weighed on the international prices of key metals. 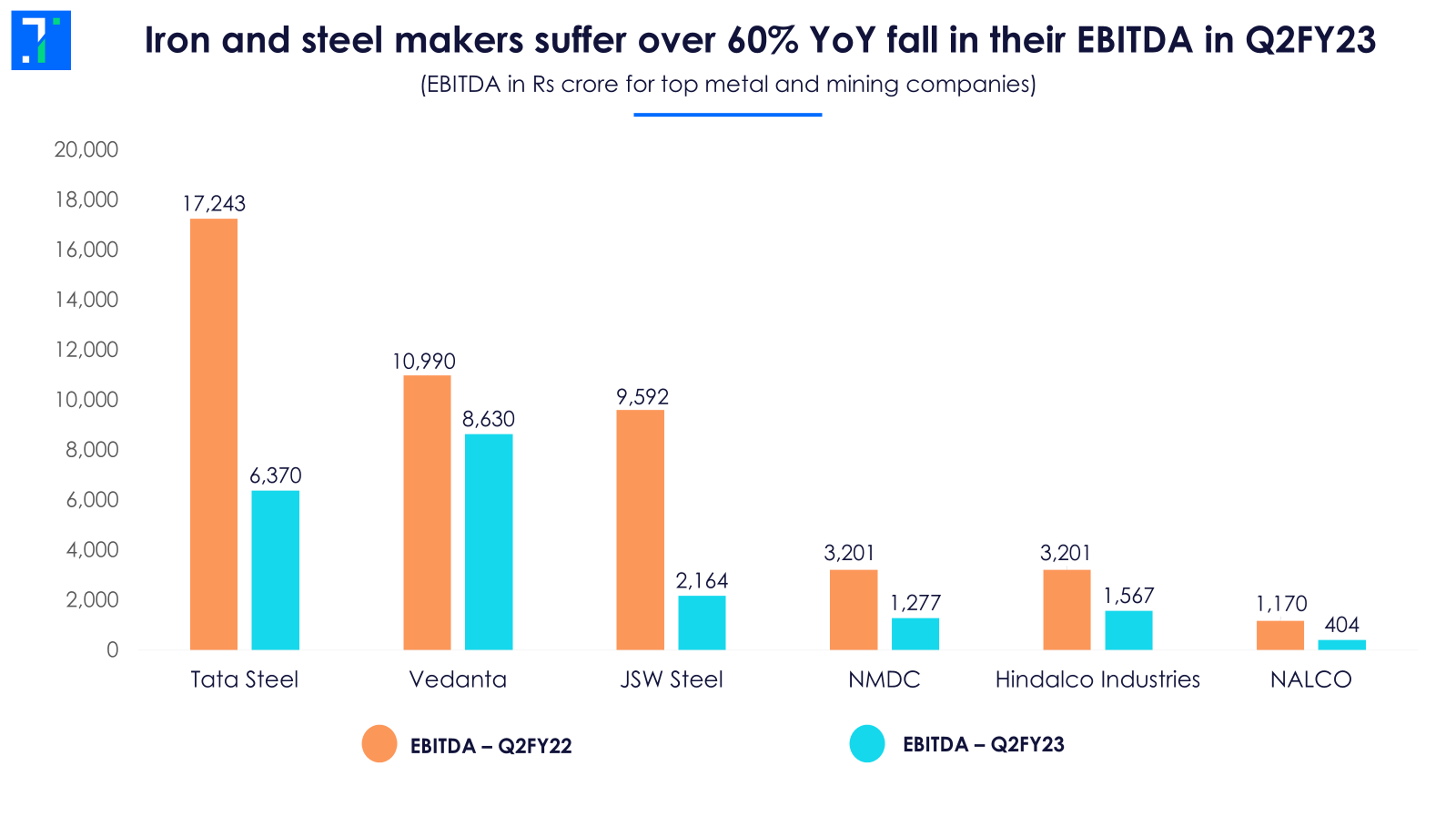 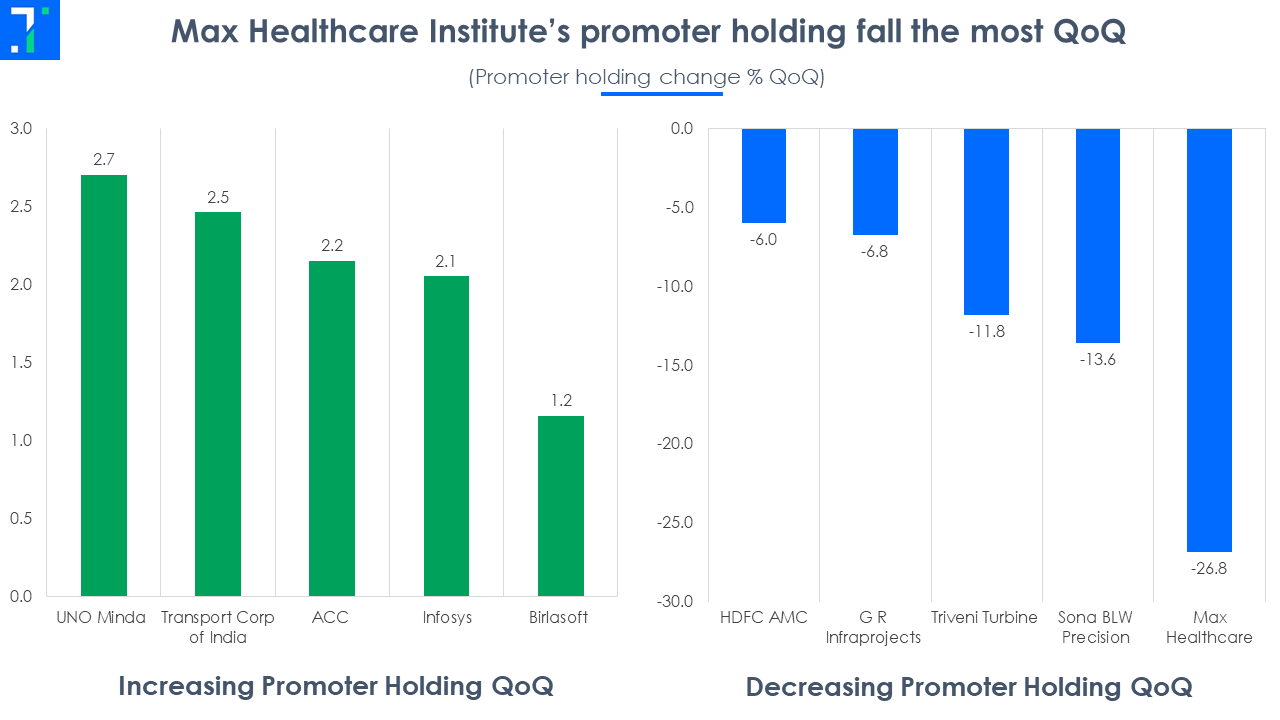 In this edition, we take a look at major stocks which saw over 0.5% QoQ rise or fall in the holdings of their respective promoters in Q2FY23. This screener features 33 stocks from Nifty 500 and 4 stocks from the Nifty 50 index.

ACC saw its promoter holding rise by 2.2% QoQ in Q2FY23. BNP Geojit Paribas believes that the recent reduction in energy prices and a traditional post-monsoon rebound will boost the company’s performance in the upcoming quarters.

Max Healthcare Institute’s promoter holding fell the most by 26.8% QoQ in Q2FY23. PE firm KKR sold its entire stake in the company for over Rs 9,000 crore via its affiliate, Kayak Investments, in August 2022.