Which stocks did superstar investors buy in Q1FY23?

Investors take a keen interest in the stocks that superstar investors like Big Bull Rakesh Jhunjhunwala, Sunil Singhania, Ashish Kacholia, Dolly Khanna and others are buying. We take a look at which stocks some of these Superstars bought during Q1FY23. 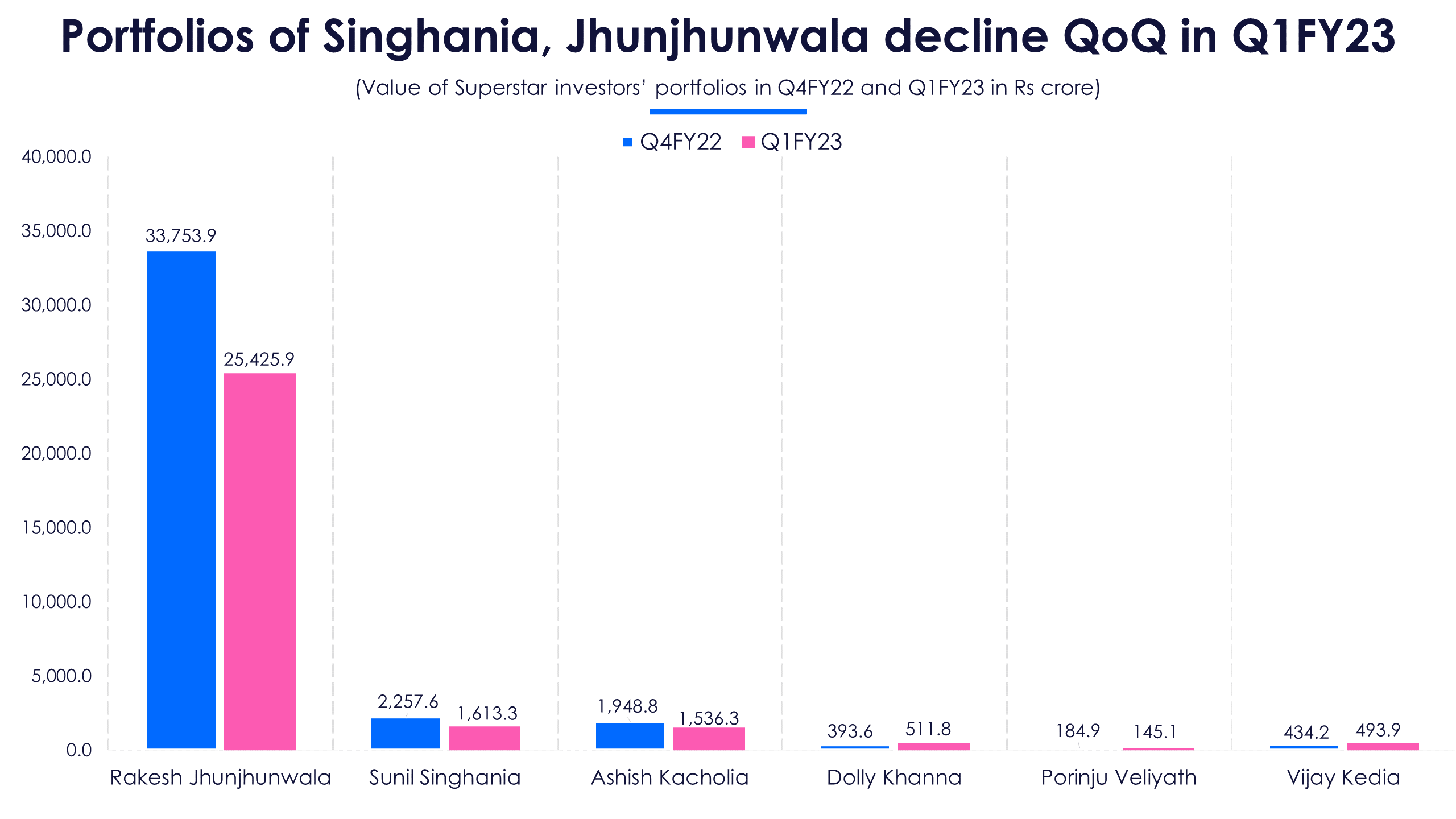 As the market took a bearish turn in Q1FY23, Rakesh Jhunjhunwala, Sunil Singhania, Ashish Kacholia, and Porinju Veliyath’s net worth also fell as a result. They still made new bets and doubled down on some older ones. However, Radhakishan Damani did not make any new additions to his portfolio during the quarter.

Rakesh Jhunjhunwala buys Escorts Kubota in Q1FY23, after cutting his stake in Q4FY22

While the auto sector is in recovery, Escorts Kubota is still struggling with costs - the company’s net profit declined 26.3% QoQ in Q1FY23 due to a steep rise in commodity prices. During Q3FY22 the stock rose by 22.9% but fell 11.1% in Q4FY22. It looks like the big bull bought the stock when it was trading at lower levels in Q1FY23. From April 1 till August 8 the stock has fallen 3%.

Sunil Singhania’s Abakkus Fund saw its consolidated net worth fall 28.5% QoQ in Q1FY23 to Rs 1,613.3 crore. During the quarter, the Abakkus Fund purchased new stakes in multiple companies - a 2.7% stake in J Kumar Infraprojects, a 1.9% stake in Stylam Industries, a 1.3% stake in Paras Defence and Space Technologies, a 1.1% stake in CMS Info Systems, and a 1.3% stake in Ethos. 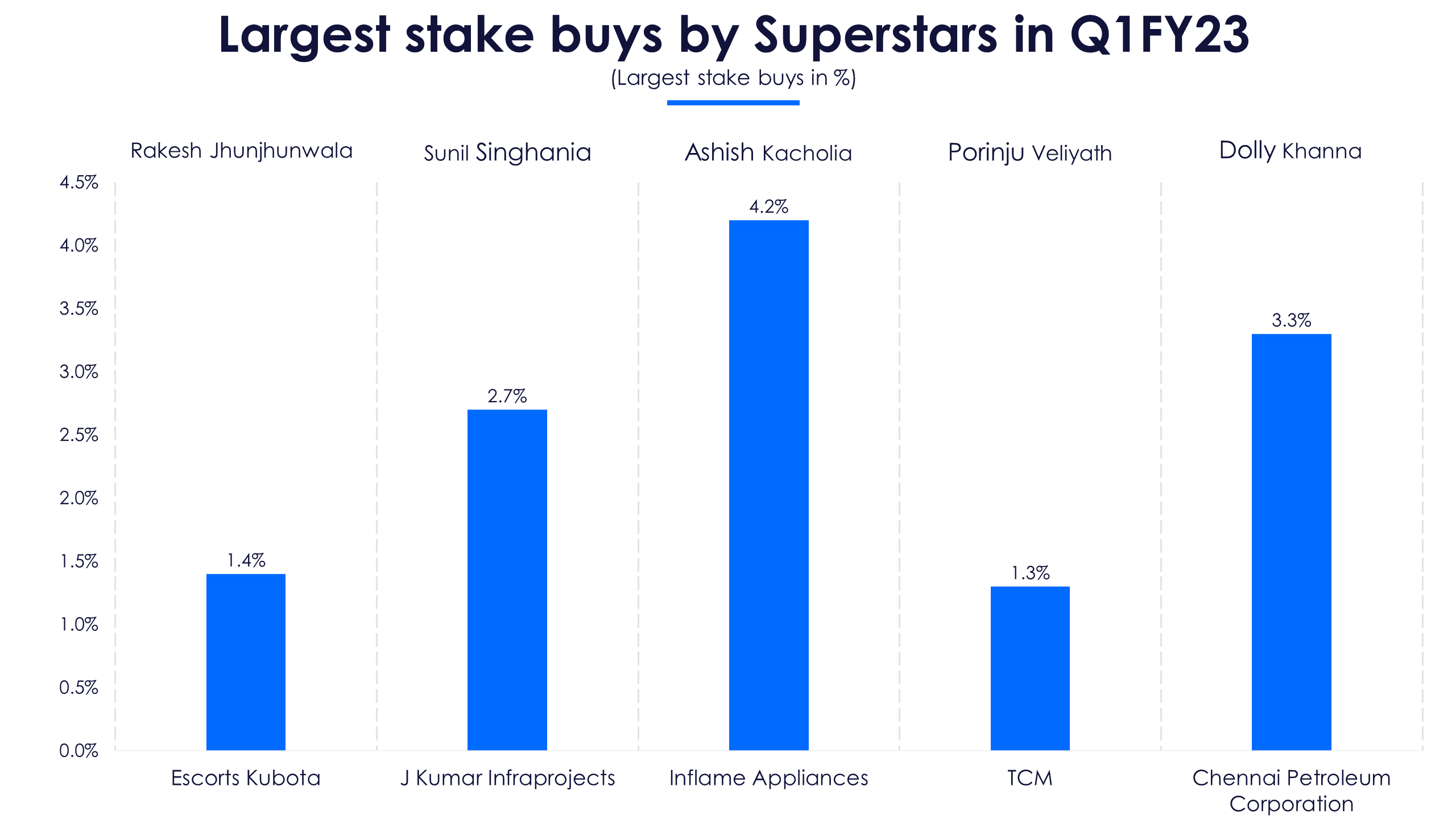 Ashish Kacholia was the most active Superstar buying stocks in Q1FY23

Ashish Kacholia’s net worth fell 21.6% QoQ to Rs 1,536.3 crore in Q1FY23. Kacholia bought a fresh 4.2% stake in micro-cap company Inflame Appliances. The company makes kitchen appliances like gas stoves, cooker hoods, and cooking ranges. Kacholia also bought a new 3.6% stake in another micro-cap firm – Repro India. He added the restaurant chain Barbeque-Nation Hospitality to his portfolio with a 1.1% stake during Q1. He increased his stake in another houseware company La Opala RG by 0.4%, bringing his stake to 1.4%.

The marquee investor also added a 0.5% stake in Gravita India and a 0.4% stake in Faze Three, and he now holds total stakes of 1.8% and 5% in these companies respectively. In Xpro India, Kacholia increased his stake for four consecutive quarters since Q2FY22 and now holds a 3.9% stake. The other companies where he increased stakes are United Drilling Tools, Fineotex Chemical, Yasho Industries and Genesys International Corporation.

Vijay Kedia’s net worth rose 13.8% QoQ to Rs 493.9 crore. He added a 0.7% stake in industrial machinery producer Elecon Engineering Company. He now holds a 1.9% stake in the company. The stock rose by nearly 125.7% since April 1, 2022. Kedia also added a 0.1% stake in Vaibhav Global, an online retailer that manufactures fashion jewellery and lifestyle accessories.

Khanna also bought a 1.2% stake in Zuari Industries and Suryoday Small Finance Bank and a 1.1% stake in both National Oxygen and Manali Petrochemicals. She increased her stake in Pondy Oxides & Chemicals by 0.3% to 3.9% during Q1FY23. She also bought minor stakes in Tinna Rubber & Infrastructure, Ajanta Soya, and Prakash Pipes.

Porinju V Veliyath bought a 1.3% stake in the agrochemical maker TCM. The company’s stock rose 43.5% from the beginning of Q1FY23 till August 8. The other purchase he made in Q1 was a 0.6% stake in micro cap real estate technology company Aurum Proptech. He now holds a 1.7% stake in the company.

Mohnish Pabrai ups his stake in a petrochemical maker

VivekAnanth Hi Nagesh. Here is the article we wrote based on the Q4FY22 holdings of the Superstars. https://trendlyne.com/posts/3471068/whi…
09 Aug 2022  Like
felix3 Who is that last fellow?
11 Aug 2022  Like
More from The Baseline
More from Abhiraj Panchal
Recommended
Five Interesting Stocks Today
The Baseline | 30 Sep 2022, 04:19PM
Market closes higher, JP Morgan reiterates ‘Overweight’ rating on Paytm
Trendlyne Marketwatch | 30 Sep 2022, 03:50PM
Chart of the week: US interest rate hikes drive plunge in world currencies against the dollar
The Baseline | 28 Sep 2022