Is Thierry Delaporte the Midas Wipro was looking for?

Three IT services companies have declared their Q4 results. TCS and Infosys’ shares reacted negatively to the numbers. But Wipro’s stock has set the market on fire, touching a 52-week high a day after it announced its results after market hours, before ending the day’s trade 9% ...

Three IT services companies have declared their Q4 results. TCS and Infosys’ shares reacted negatively to the numbers. But Wipro’s stock has set the market on fire, touching a 52-week high a day after it announced its results after market hours, before ending the day’s trade 9% higher. The company reported March quarter results in line with the street’s estimates, with strong sequential growth, sustained large deal wins and stable margins. 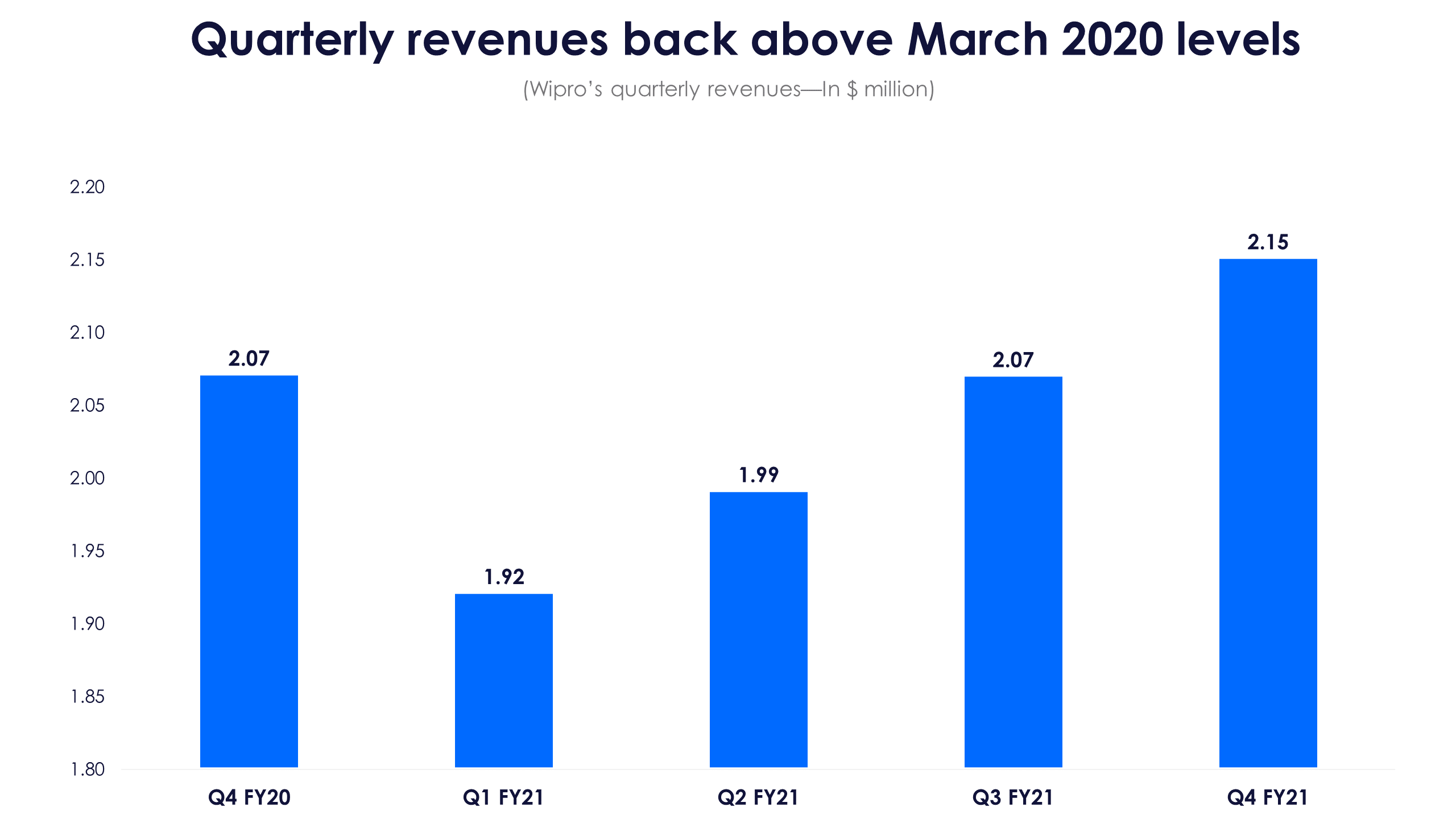 On a sequential basis, net profit growth was flat. The company undertook wage hikes for 80% of its employees effective from January 1,  2021. Consequently, margins have come down sequentially. The offshore revenue mix was at 54.5% and gross utilization for the quarter stood at 76.7%. 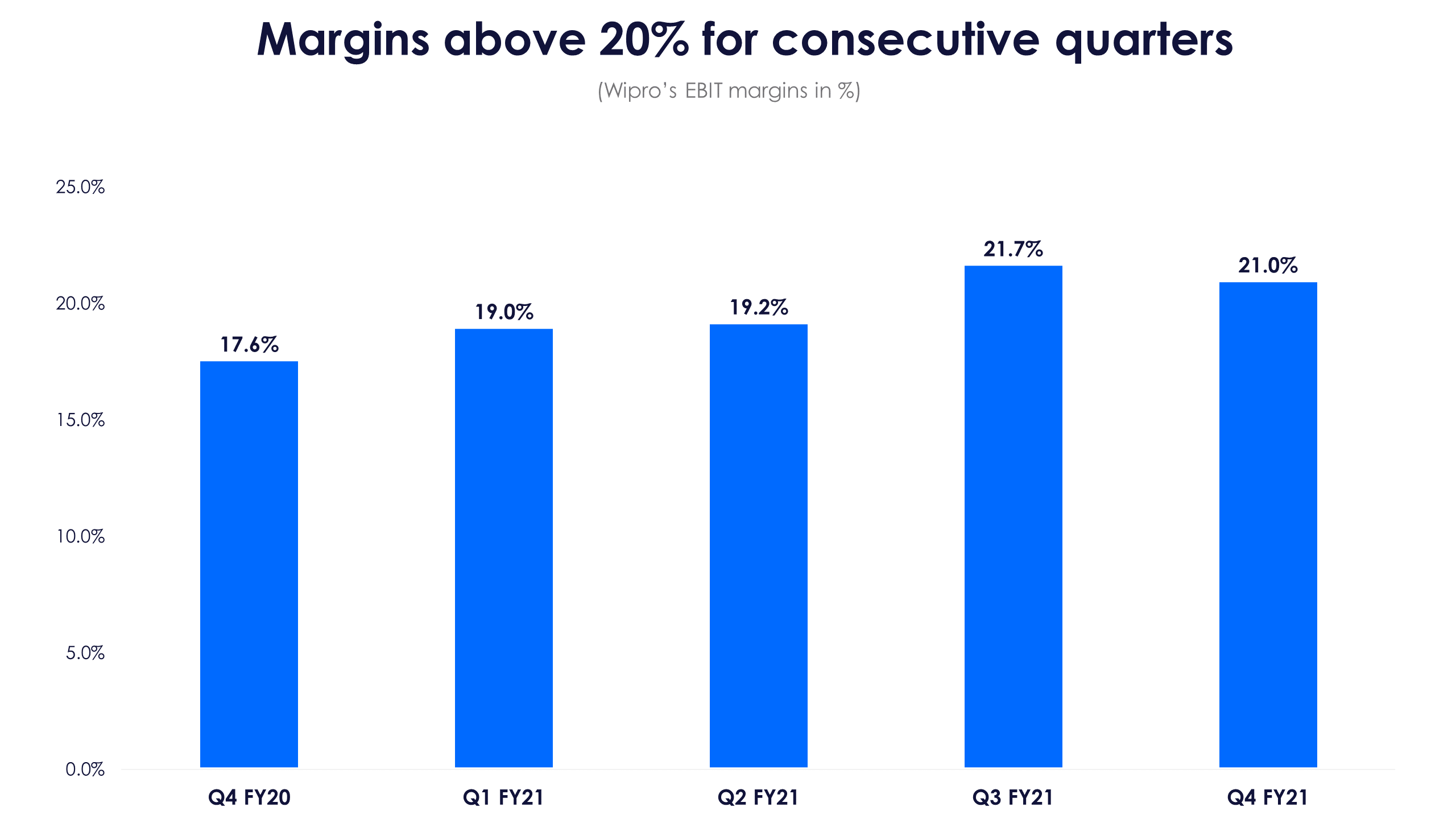 Operating margins came in at 21%, up 340 bps YoY, but fell 70 bps QoQ due to the impact of salary hikes. On a full year basis, margins increased 220 bps in FY21. The company also generated strong operating cash flows at 136.7% of net income for FY21.

Being the largest contributor to Wipro’s revenues, the BFSI (banking, financial services and insurance) vertical’s revenue growth added to Wipro’s quarterly performance. The BFSI (30% of revenues) vertical returned back to positive territory after revenues fell throughout FY21. Revenues were up 0.6% YoY in constant currency terms (cc). Sequential revenue growth  in Q4 was in much better shape at 2.7%.

The consumer vertical (17% of revenues) too returned to positive territory in the March 2021 quarter with 3% YoY growth (cc) and 7% in sequential terms(cc). The health vertical (13% of revenues), after reporting stable growth in September and December quarters, saw a 1.6% fall in revenues.

The energy vertical (13% of revenues), stabilized, turning positive in December quarter FY21. The management said this vertical is expected to be volatile in the coming quarters. Revenues from the manufacturing vertical (8% of revenues) fell 3% YoY (cc), while the technology vertical  (13% of revenues) saw revenues rise with 7% YoY (cc) growth. Communications continued its slump as revenues fell  11.4% (cc) in Q4 FY21. 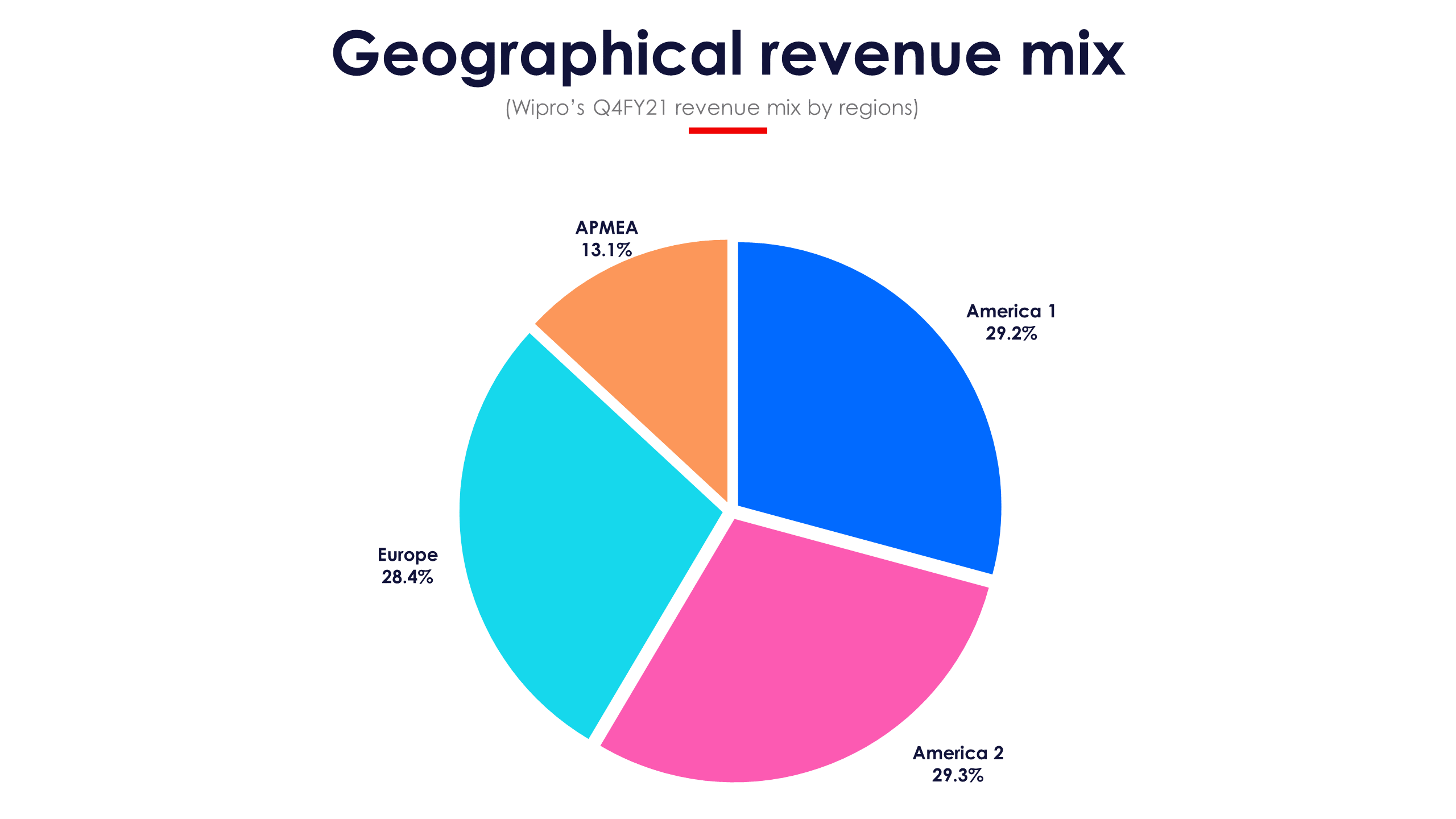 A New Wipro In the Making?

Wipro reported its strongest Q4 in the past 10 years in FY21. But what has enthused the street is the large deal wins over the past two consecutive quarters that Wipro has managed to bag. The company signed a $700 million deal with global wholesale company METRO AG in December 2020, and another one with Germany’s Telefónica in February 2021. The H2FY21, the total contract value of deals bagged was $7.1 billion, the largest ever in Wipro’s history. Of this, deals worth $2.6 billion are large deals.

In Q4 FY21, the company closed 12 large deals resulting in a TCV of $1.4 billion. Thierry Delaporte, CEO and MD at Wipro, said that large deals were a consequence of proactive engagement with clients, connecting with them at multiple levels and understanding their landscape and priorities. He added that due the underlying demand environment for its services,  the  company is witnessing strong traction across all markets and expects broad-based and sustainable growth in the coming quarters.

Delaporte said IT spends are definitely going to increase in the coming quarters driven by cloud migration, and as clients rapidly adopt newer technologies. And even though pricing pressure exists in the industry, clients are ready to pay for the right service offerings and talent.

Robust revenue guidance, but margins may be hit

Cloud is fast becoming the computing platform for a large percentage of infrastructure applications in the future. It now constitutes one-fourth of Wipro’s revenue basket. Although the company does not disclose the digital business mix, revenue from cloud business is growing in high double digits, along with cyber security and digital customer experience.

The management has given guidance of 2-4% sequential revenue growth of% and expects IT Services revenues to be in the range of $2,195 million to $2,238 million in June quarter FY22. But this guidance excludes revenue contribution from recent acquisitions of Capco and Ampion which will be fully integrated before the end of the upcoming June quarter. London headquartered Capco is Wipro’s largest acquisition till date for $1.45 bn, beefing up its BFSI segment. This was announced in early March 2021, followed by an agreement in April 2021 to acquire Ampion, an Australia based provider of cyber security, DevOps and quality engineering services.

Although revenue growth does look strong, there might be certain headwinds for operating margins in FY22. In addition to return of travel costs, margins will be impacted by salary hikes of 20% for top level executives with effect from June 1, 2021, and due to the regular FY22 salary increment cycle and integration costs pertaining to the Capco acquisition. The management has guided for a 19-19.2% for FY22 excluding a 2% Capco-related reduction in margins. This is lower than the 20.3% operating margin of FY21.

Investors should note that Wipro’s stock price has doubled over the past year, and nine of those months were under the stewardship of Delaporte. The hope on the street seems to be that this time could be different with Wipro, and we will soon find out if it’s only hope, or if Delaporte really is Wipro’s Midas.