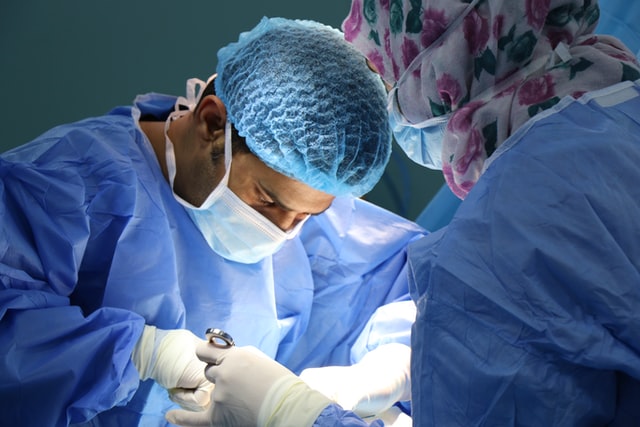 Healthcare used to be a relatively quiet sector a decade ago, before it was upended by the entry of new startups, funded by millions in venture capital and with ambitious growth plans. One of the established players, Apollo Hospitals Enterprise (AHEL) is an omnichannel company in the sector with a presence in hospitals, pharmacy distribution, primary care, and diagnostics.

Healthcare used to be a relatively quiet sector a decade ago, before it was upended by the entry of new startups, funded by millions in venture capital and with ambitious growth plans. One of the established players, Apollo Hospitals Enterprise (AHEL) is an omnichannel company in the sector with a presence in hospitals, pharmacy distribution, primary care, and diagnostics.

After a phase of rapid expansion over the last two years, it is now facing intense competition in its pharmacy distribution and diagnostics business. Startups with aggressive expansion plans like PharmEasy, Medplus Health Services, and Tata 1mg are resorting to heavy discounts to increase their market share. As a result, AHEL’s margins are under pressure. This is reflected in its share price, which fell over 20% in the last two months.

Despite the competition, AHEL’s management is upbeat about its growth prospects in FY23. AHEL is guiding a 20% growth in offline pharmacies. The management also expects an EBITDA margin improvement of 150 bps to over 24% and revenue growth in the mid-teens in FY23 for the healthcare services segment.

Going forward, the hospital business is expected to offset margin pressures in the pharmacy distribution and diagnostics segment. The EBITDA margin of hospitals rose 8.8 percentage points YoY, to 22.6% in FY22. This is mainly due to a change in the payer mix (towards higher margin self-paying and insurance categories) and clinical mix (towards high-margin specialized surgeries). The management expects this shift in payer and clinical mix to continue in FY23. 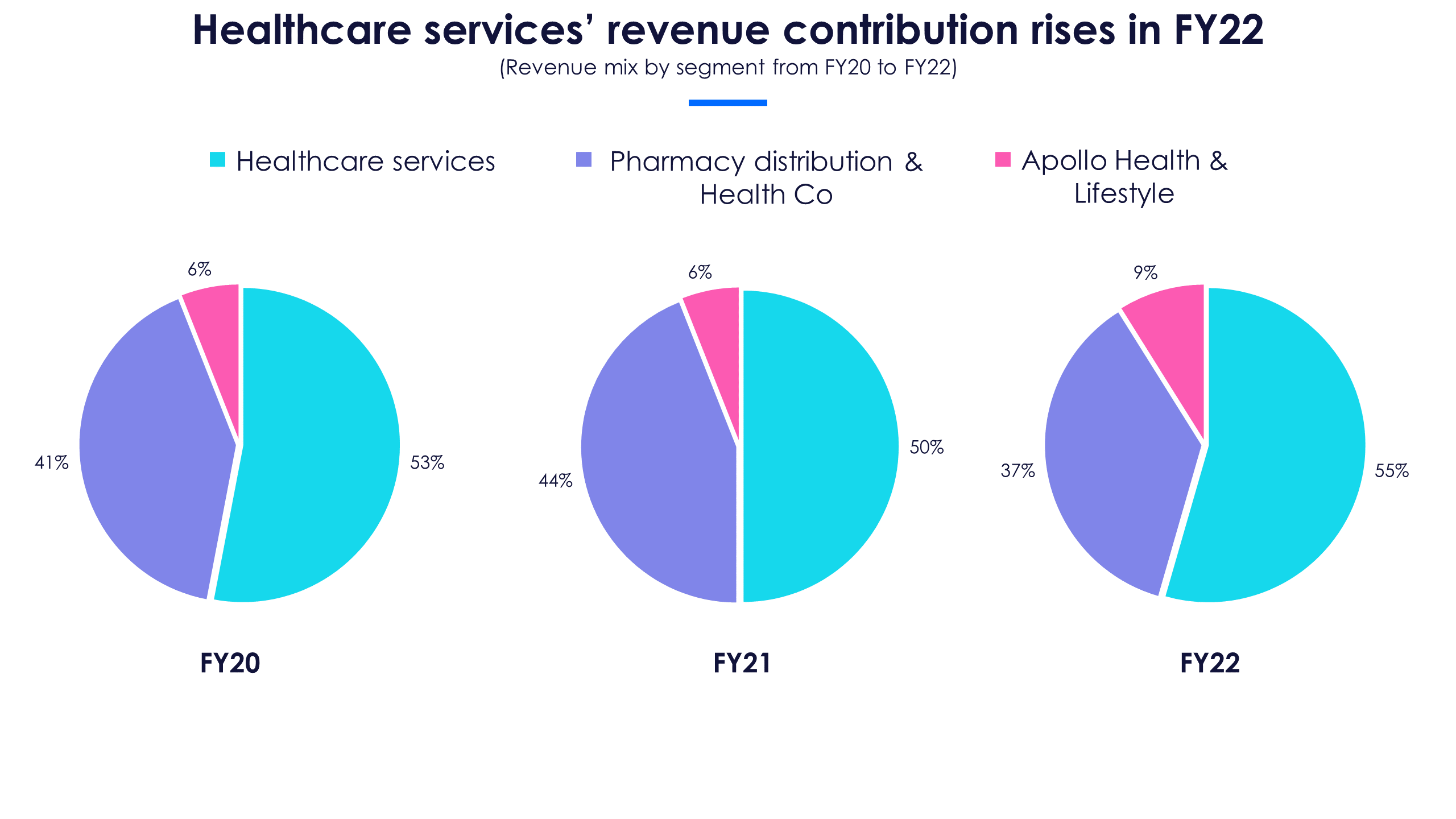 In the hospital segment, old hospitals post higher margins when compared to new units, and constitute about 71% of this segment’s revenue. New hospitals have higher expenditure, lower client base leading to a relatively lower margin.

While revenue from pharmacy distribution (both offline and e-commerce) contributed 37% to the total revenue, Apollo Health and Lifestyle (AHLL), which includes the diagnostics segment, contributed 9% in FY22. 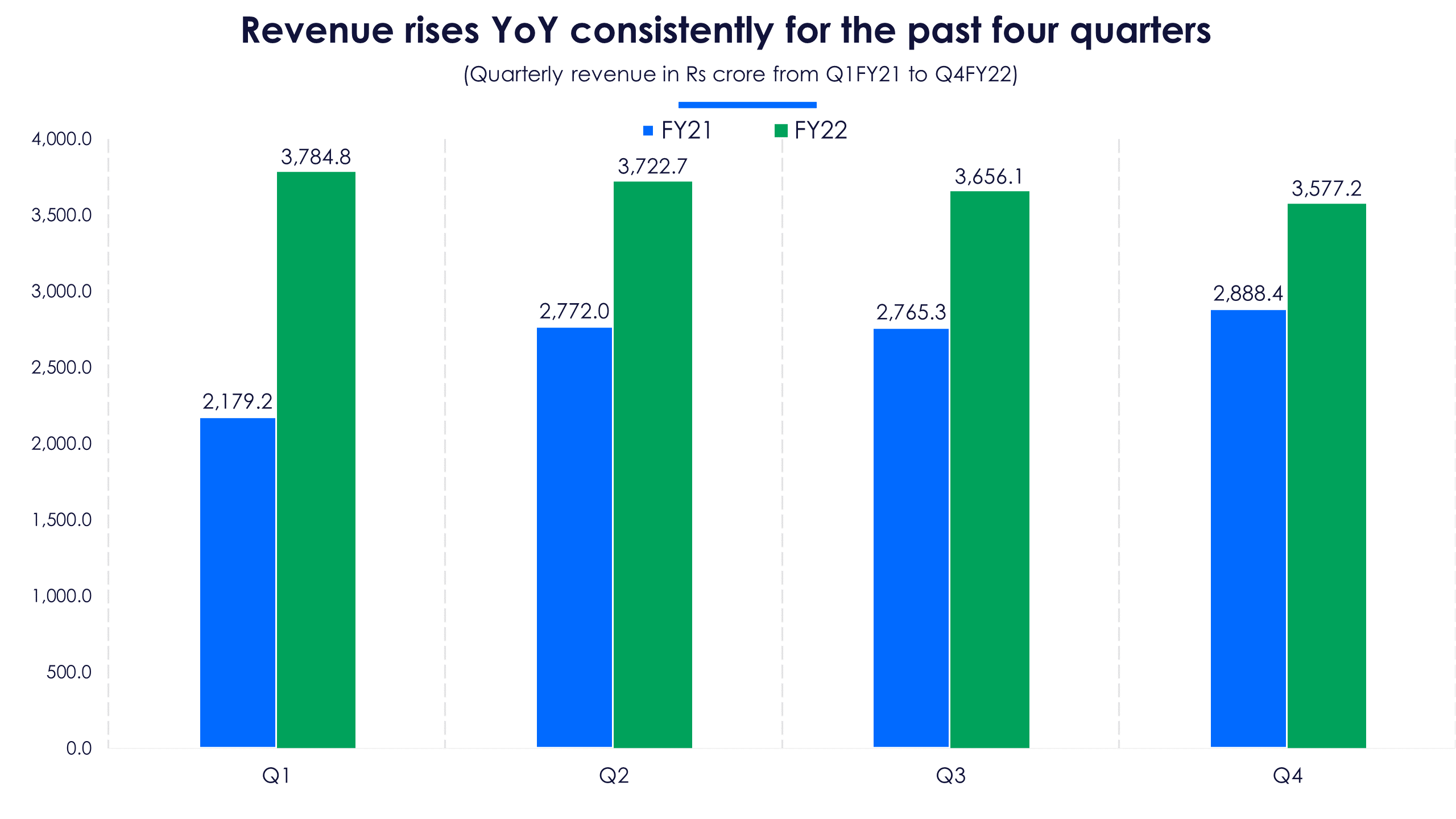 Though occupancy rose eight percentage points YoY in FY22, the Omicron variant wave in January and February dragged down the occupancy. In Q4FY22, occupancy fell five percentage points YoY to 58%. Despite this, the average revenue per operating bed (ARPOB) rose in Q4FY22 mainly due to a change in payer and case mix. Elective surgeries picked up in FY22, which pushed the case mix towards high-margin specialized surgeries. According to the management, this trend is expected to continue in FY23.

Even though ARPOB and revenue from operations rose in Q4FY22, net profit fell 46.3% YoY to Rs 90.1 crore. This is due to a one-time cost of Rs 88 crore, which is a capital gain tax arising out of Health Co’s reorganization. 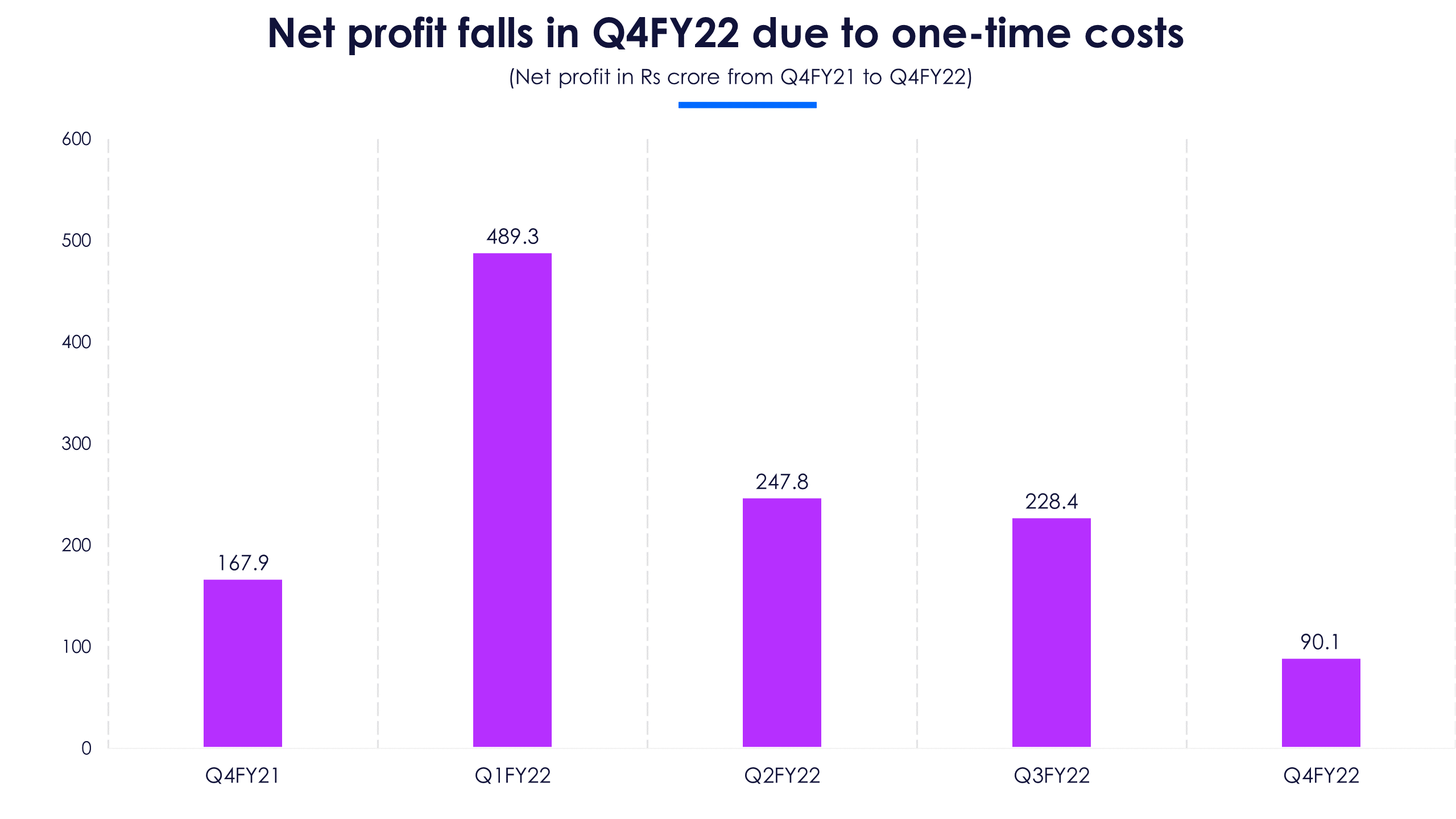 In addition, high operating costs in the Health Co segment and lower profitability in the hospital segment due to the Omicron variant also dragged down the net profit in Q4FY22.

The pandemic acted as a nudge for AHEL to expand in the health tech category. Its arm Apollo Health Co was formed in June 2021 to house its front-end and back-end pharmacy businesses, and the high-growth digital business branded Apollo 24|7. The whole pharmacy distribution segment is now transferred to Apollo Health Co, a 100% subsidiary of AHEL as of March 16, 2022.

Health Co has the lowest EBITDA margin (7.6%) of all AHEL’s segments because of the intense competition in this space – both offline and online. In FY22, the EBITDA margin fell 50 basis points YoY to 7.6% due to increased discounts in these segments. Players like PharmEasy and Tata 1mg are offering higher discounts than Health Co on medicines. The overall blended discounts (online and offline pharmacy) for Health Co increased to 12.5% in FY22 from 10% in FY21. The discounts on online sales can be up to 16%, with competitors like PharmEasy offering 18% to 20% discounts.

AHEL has been trying to sell a stake in Health Co to raise money for over a year. But a deal is still elusive. Apollo’s management said that it is holding off on the stake sale for the next six months, believing the health tech space is undervalued. With regard to the offline pharmacy space, Medplus Health Services continue to be the biggest competitor. 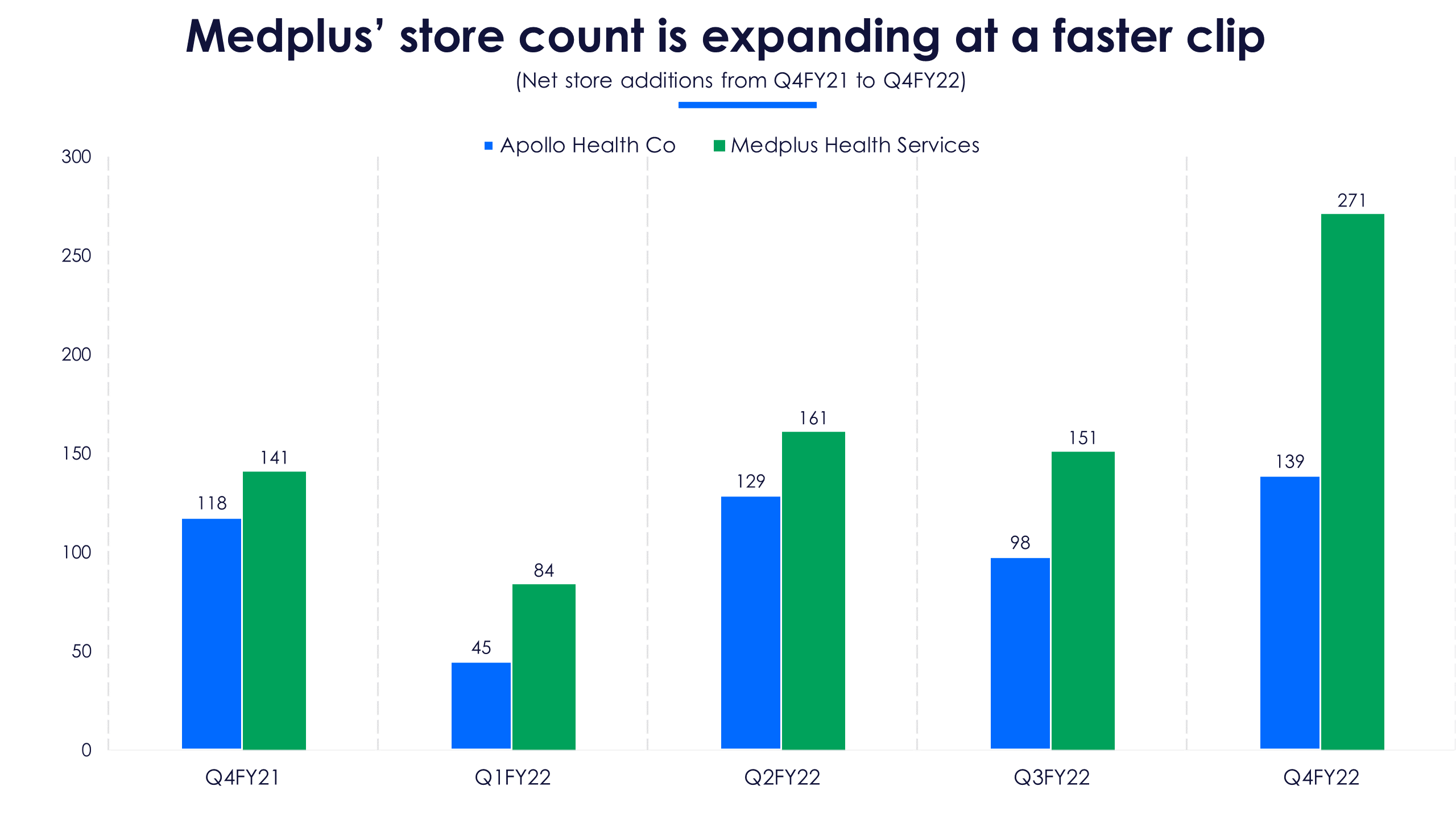 Apollo Health Co boasts of a larger network compared to Medplus, With a total store count of 4,529 against Medplus’ 2,748 as of March 2022. However, Medplus is expanding its network at a faster clip, adding 667 stores in FY22 (on a net basis).

AHEL is focusing on its growth projects (Health Co and AHLL) to drive revenue over the long term. Aggressive expansion has made this hospital company an omnichannel player in the healthcare space. Despite intense competition, AHLL continues to grow, helped by cross-sales opportunities. Every customer acquisition in one segment is an opportunity for the other. For example, Apollo 24/7, which is an integrated healthcare app, drives customers to all three verticals. Also, a patient who comes in for a check-up at the hospital may purchase medicines at the Apollo Pharmacy. Revenue opportunities are thus multiplied.

AHLL, which includes the diagnostic segment, contributed only 6% of total revenues in FY21, but in FY22 this rose to over 9%. Aggressive expansion in the diagnostics segment helped increase revenues. Diagnostics revenue jumped 2.3 times YoY to Rs 398.7 crore in FY22. With a target of achieving Rs 1,000 crore revenue by FY25, the company is planning to continue its organic growth momentum for the diagnostics business in FY23.

However, the management said that it will also keep an eye out for acquisition opportunities. Interestingly, according to reports, AHEL is in the race for acquiring a stake in Metropolis Healthcare. However, Metropolis’ promoters denied any plans to sell their stake.

Trendlyne’s Forecaster’s average of consensus estimates shows a 15% revenue growth expectation by analysts in FY23. This is in line with management’s revenue growth guidance of mid-teens in FY23. 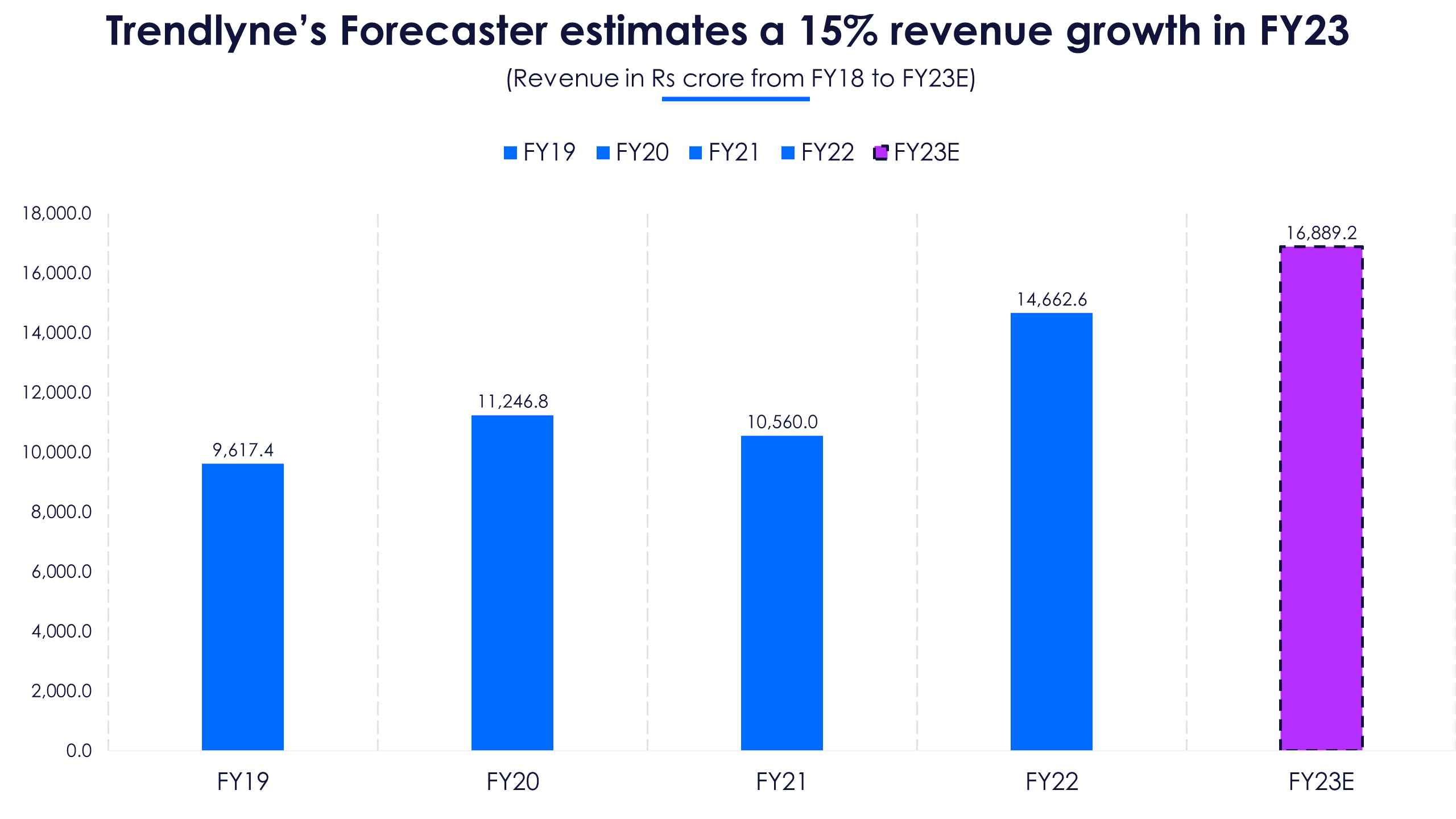 Though AHEL has multiple levers to drive growth, there’s intense competition in pharmacy distribution and diagnostics segments that can play spoilsport. While steep discounts in the pharmacy space can put margin under pressure, companies offering cheaper tests in the diagnostics space can make it difficult for AHLL to acquire customers.

However, the hospital segment is set to continue its growth momentum in FY23 on the back of increased prices, better payer mix, and clinical mix. In addition, the new hospitals are also seeing strong growth in their EBITDA margins, which rose eight percentage points YoY in FY22.