In January, some frogs became princes - and vice versa

Last January, whispers around 'a dangerous new virus' were just beginning to build. This January, the fever is breaking and the speed of the economic recovery from Covid19 has become clearer as December quarter results come in.

This week we look at:

Alembic Pharma skids at home and abroad, as Covid19 recedes

Last year was great for Indian pharmaceutical companies - the Nifty Pharma index rose by 56.6%, the largest yearly gain of any sectoral index. In comparison, the Nifty 50, ended 2020 up by 14% over 2019.

But in the first month of 2021, the pharma index is down by 4%, while the benchmark index is up by 3%. The biggest loser among large-cap pharma companies is Alembic Pharmaceuticals owing to problems at both home and abroad.

In the December quarter, the company’s net profits were up by 25% on a YoY basis, and revenue grew by 9%. But immediately after the results, Alembic Pharma’s stock tanked by 14%, touching its lowest level in three months. 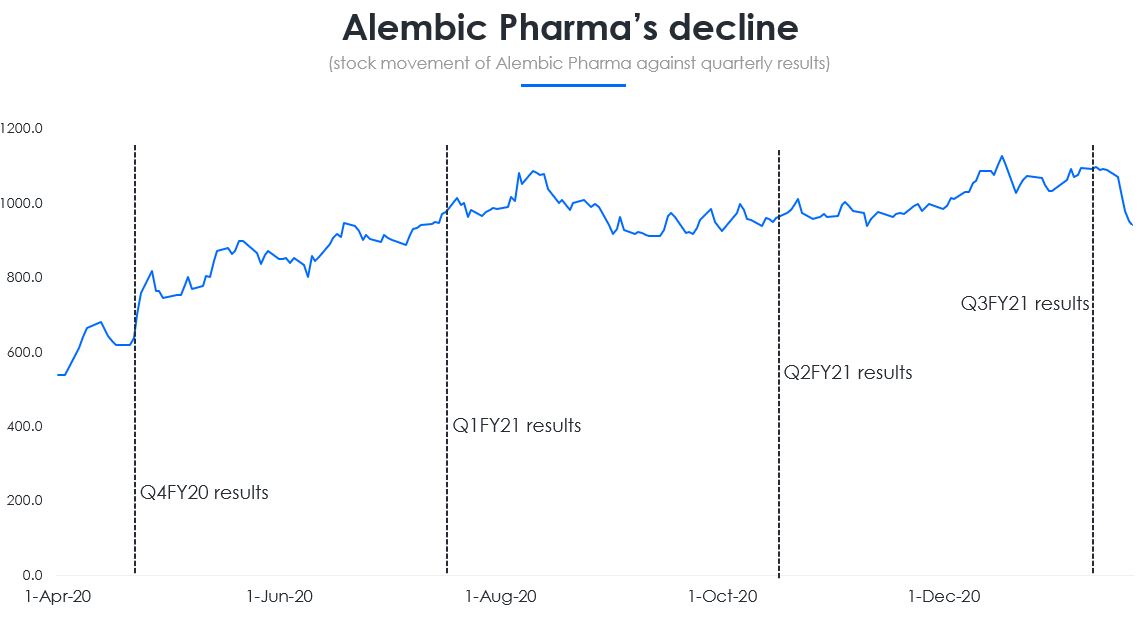 The company's net profit growth was on account of an exceptional item (income) of Rs 26 crore (10% of net profits) from its joint venture Rhizen Pharma, which turned profitable for the first time since Alembic Pharma acquired it in 2012. In Q4, analysts expect Rhizen to receive royalties after the approval of its immunodeficiency inhibiting drug. Excluding the one-time income, net profits rose less than 1% YoY. 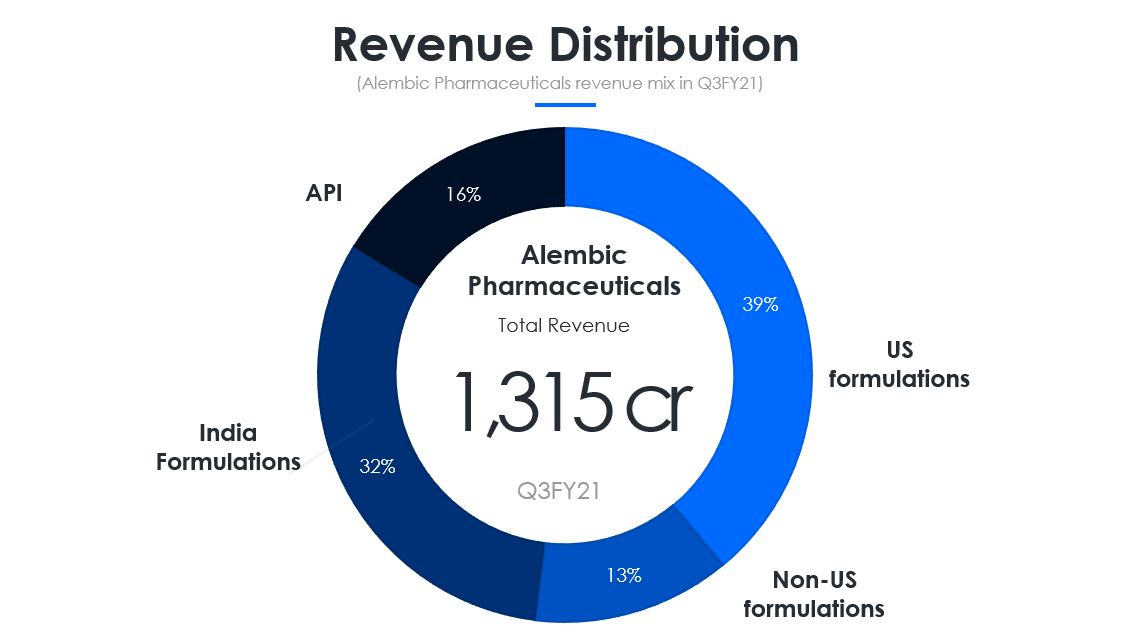 Another big reason the stock fell was the lack of growth in Alembic’s US market. The US formulations market is its biggest revenue contributor. 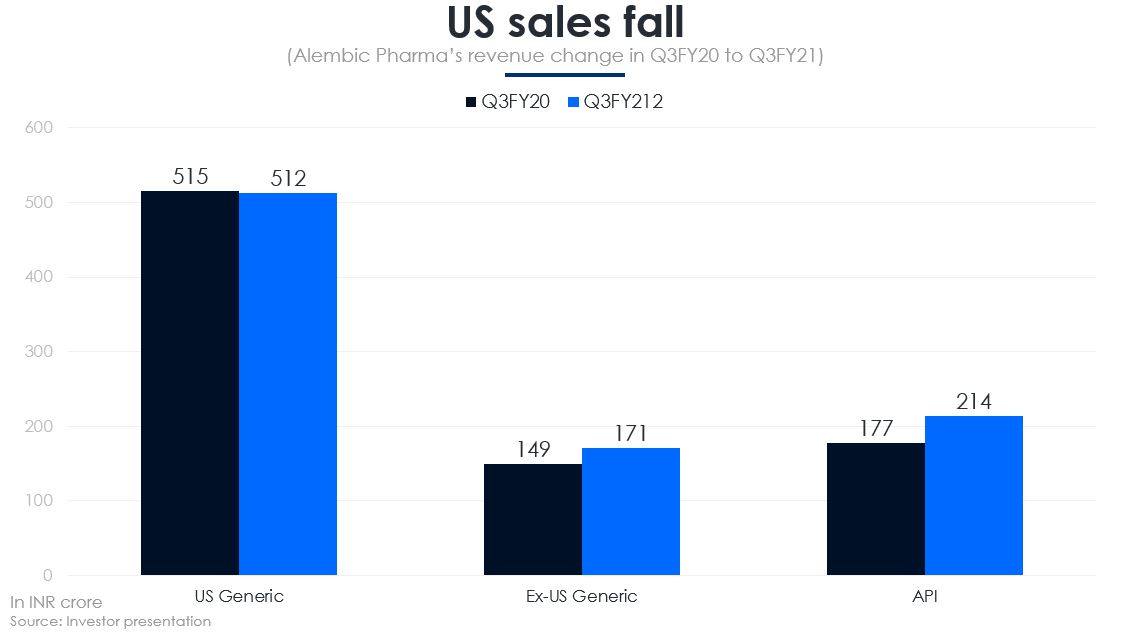 A key monitorable in the quarter was the revenue from sartans (contributing 22% of Q3 revenue), a drug used to treat blood pressure and hypertension. After the Q2 results, analysts expected Alembic to gain market share in the sartans through new launches. In Q3 however, Alembic failed to expand its sartans market share. Analysts noted that due to pricing pressure in the hypertension drug market, Alembic’s sartans’ products were priced out. Expecting the company to struggle in this market, the focus moved to the portfolio excluding sartans.

Azithromycin, an antibiotic drug used to treat Covid-19 patients drove growth in domestic formulations in Q2. During the earnings call for the quarter ended September 2020, Shaunak Amin, the Managing Director of Alembic Pharma called its Azithromycin oral solid the “outperformer for the quarter.”

In Q3, due to decreasing domestic Covid-19 cases, the growth in sales of Azithromycin dropped. Analysts expect the sales of Azithromycin to normalize in Q4 and in FY21, with the Covid-19 vaccine deployed. This is why the price of Alembic Pharmaceuticals’ stock dropped sharply immediately after its Q3 results.

You can track the results of the company of your choice here.

With automobile sales rising at the end of 2020, tyre manufacturers had a good Q3. But it wasn’t just returning automobile demand that helped tyre makers. Growing replacement demand, import restrictions, and exports opening up in major markets have provided a positive outlook heading into the final quarter of FY21.

Over 80% of the demand for tyres comes from two sources -  original equipment manufacturers (OEMs) and from the replacement market. 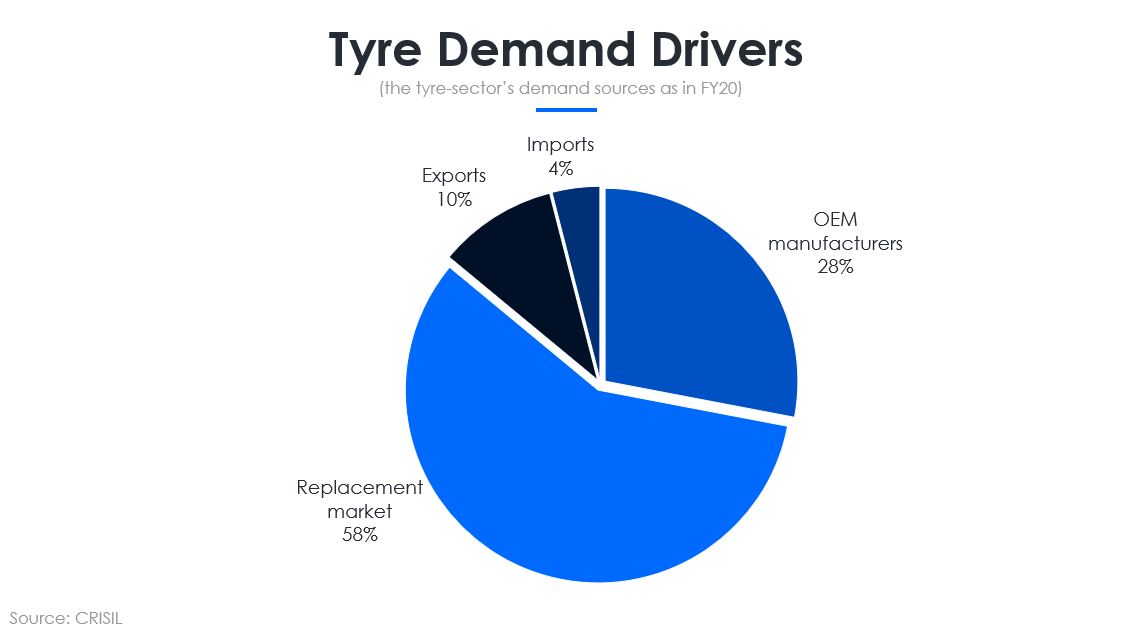 OEM demand in Q3 was led by robust sales of commercial vehicles (CVs) in December 2020. Ashok Leyland’s CV sales grew by 22% on a monthly basis, Eicher Motors (VECV) by 32% and Tata Motors by 14%. Even with the rise in demand for FY21, OEM demand for tyres is expected to decline by 5-7%, according to CRISIL Ratings. The rating agency expects the fall in tyre demand from CV manufacturers to be offset by the rise in tyre demand by tractor makers in the agri sector. Mahindra & Mahindra’s farm equipment and VST Tillers & Tractors’ power tillers and tractors saw sales increasing by 23% and 59% on a YoY basis.

Replacement demand, the largest contributor to the tyre demand, declined by 2% YoY for the nine months ended December 2020. The lower fall compared to the 5-7% fall in OEM demand is because of resumption in freight movement and pent-up demand from existing CV manufacturers. Replacement demand from CVs and tractors contributes 90% of export demand, which CRISIL Ratings expects to sustain in Q4. 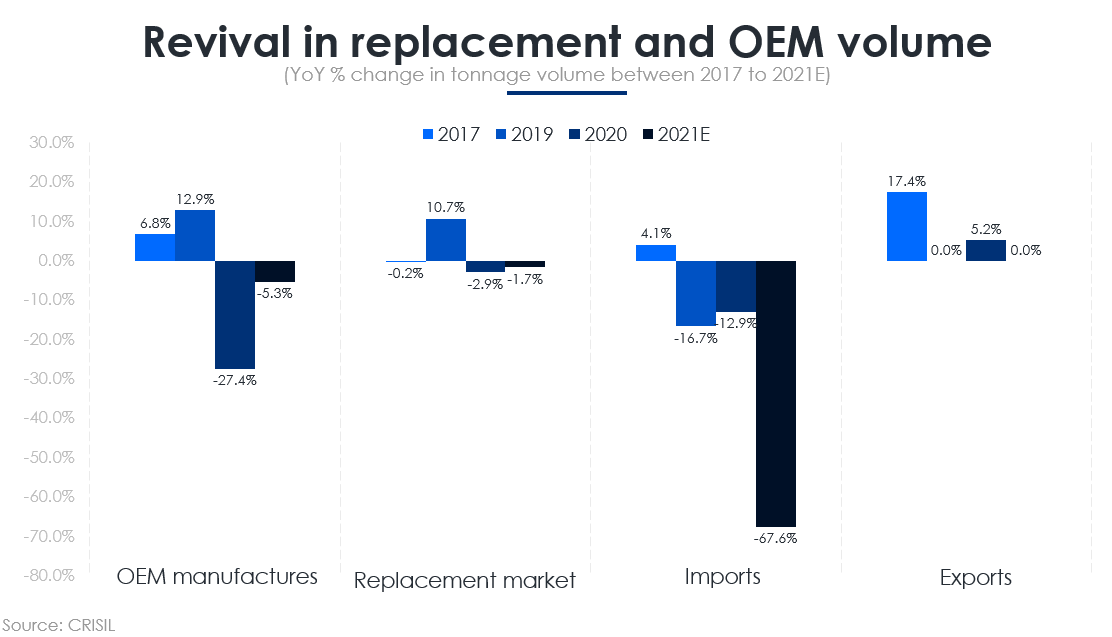 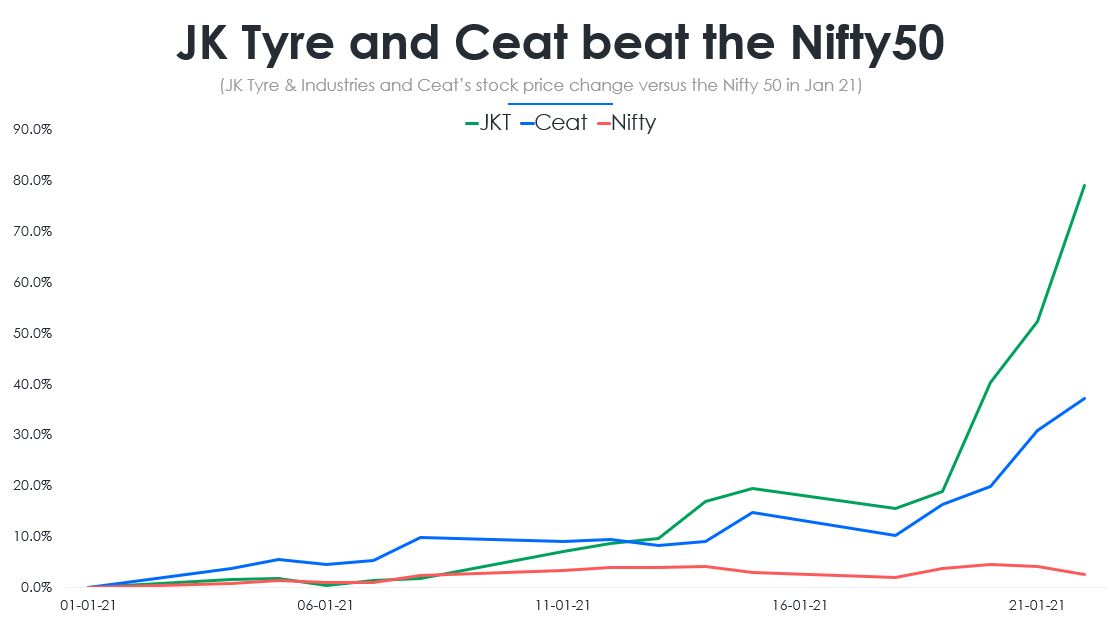 After tyres were put on the restricted import list by the Directorate General of Foreign Trade in June 2020, tyre companies have upped prices in the domestic market. In FY21, the average realisation per tonne of tyres manufactured will increase by 4-5% said CRISIL Ratings. Last month, the US Department of Commerce proposed an anti-dumping duty on tyres imported from South Korea, Taiwan, Thailand and Vietnam. CRISIL Ratings expects Indian tyre makers to benefit if the anti-dumping duty is implemented.

Both CEAT and JK Tyre Industries’ capacity utilisation has moved to 95% in December 2020, against 80% in September 2020. The existing capacity will be increased with planned capital expenditure (capex). Ceat did not alter its capex guidance of Rs 500 crore in FY21. Out of the FY21 corpus, Rs 50 crore will be deployed in Q4. JK Tyre and Industries has deferred capex for the year and is focusing on reducing debt. At the end of FY20, it had net debt of Rs 5,413 crore, and expects to reduce this to Rs 4,160 crore by FY23.

With strong demand, realizations improving, and capacity increasing, CRISIL Ratings estimates that tyre companies’ operating profits will grow by 6-8% in FY21, despite a poor first half of the year.

Some stocks are seeing higher delivery volumes in this volatile market

The markets have been up and down in the first few weeks of 2021. The Nifty 50 began the year just shy of 14,000, reached 14,600, and is now at 14,200 levels. In this volatile market investors are taking delivery of some stocks, as can be seen by the rise in their delivery volumes.

The stocks with the highest delivery from this list are two companies with high debt - Adani Green Energy (87%) and Future Retail (64%).

This screener shows 10 companies with delivery volumes rising by at least 33% in one month against the delivery volume of the past six months. This means that investors are increasingly taking delivery of these stocks over the past few weeks 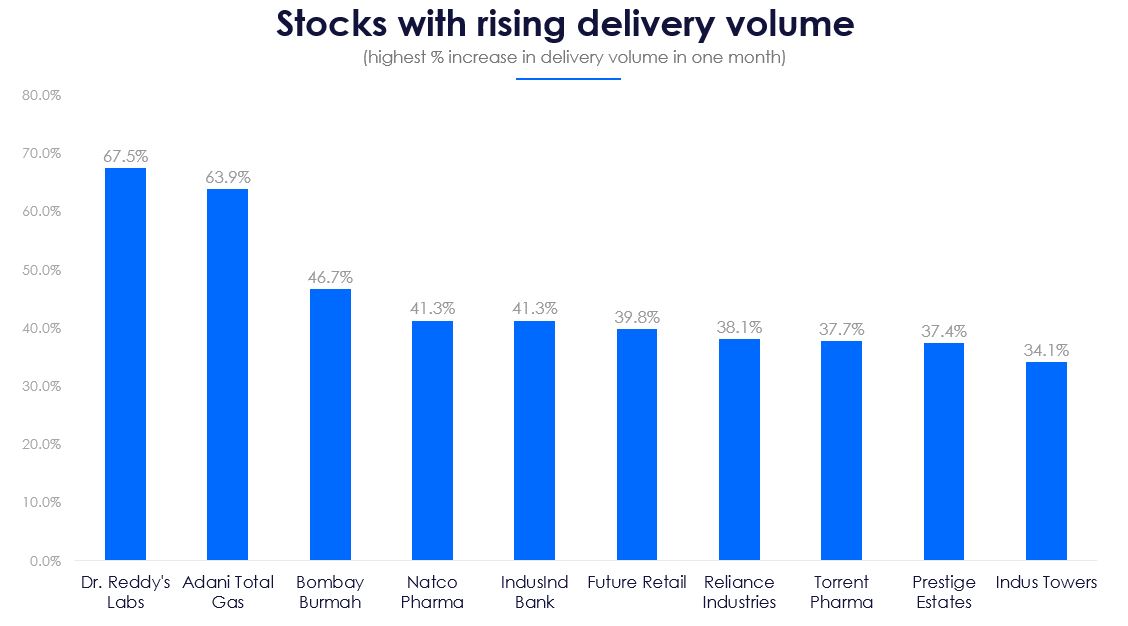 Rising delivery volume is also an indication of the strength of a price trend. Out of the stocks with high delivery volumes from the Nifty 200, over 70% (17 companies) have seen their stock prices rise in the past month.The most represented industry here is pharmaceuticals with 4 companies, followed by banks and non-banking finance companies (NBFCs) with 3 companies. No large-cap information technology company was trading with rising delivery volumes. This is despite the Nifty IT index rising by 10% in one month, the most by any sectoral index.

This analysis is part of our newsletter series. Sign up to get these in your inbox.