India turns 75 on Monday. Our generation has been especially lucky, living in a free country and post 1991 liberalization. This week in Analyticks, we do a special face-off between India's top two private banks, who have been pivotal in fuelling the nation's financial growth since 1991.

The pandemic caused a tectonic shift in the banking space, especially with customer behavior. A typical savings account holder downloaded the banking app, rather than risk a visit to a crowded bank. For many customers, this was the first time they were doing this.

In the process, they discovered convenience: no searching for their passbook, or waiting in queues, or trying to talk through bulletproof glass to a bank teller. Best of all, their applications got processed much faster.

Banking customers now increasingly prefer a digital app to meet their regular banking needs, rather than making a branch visit. With this big shift, the growth trajectory of the top two private banks changed.

ICICI Bank lagged HDFC Bank in terms of topline and bottomline growth between FY16 and FY20. This was owing to the turbulent years of 2016-2018, when the former was caught in a cobweb of rising non-performing loans and misgovernance. Meanwhile, HDFC Bank was like the Rahul Dravid of this space, thanks to its growth consistency during the period. 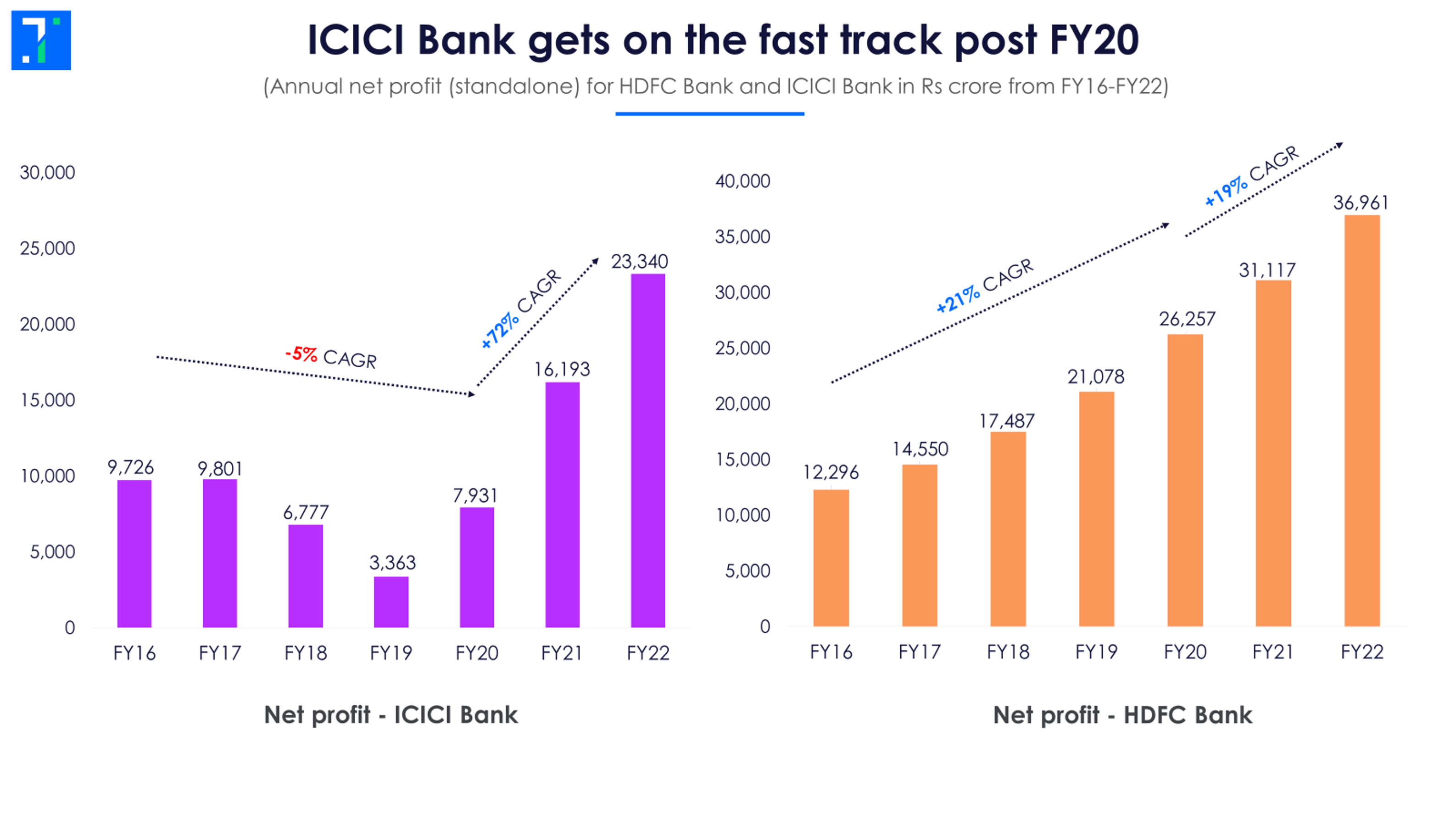 Cut to the present, and ICICI Bank has found its inner Tendulkar. It has overtaken HDFC Bank in terms of growth pace in the last 8-9 quarters.

ICICI Bank’s net interest income (NII) grew at a compounded quarterly growth rate of 4.5% between Q1FY21 and Q1FY23. This was driven by the growth in retail advances as well as SME and business banking loans.

While the bank’s advances in these segments witnessed 20%+ growth CAGR in this period, other segments were also not far behind. Basically, ICICI Bank’s strategy of ‘One Bank, One ROE’ which focuses on tapping growth opportunities across products worked well in these two years. 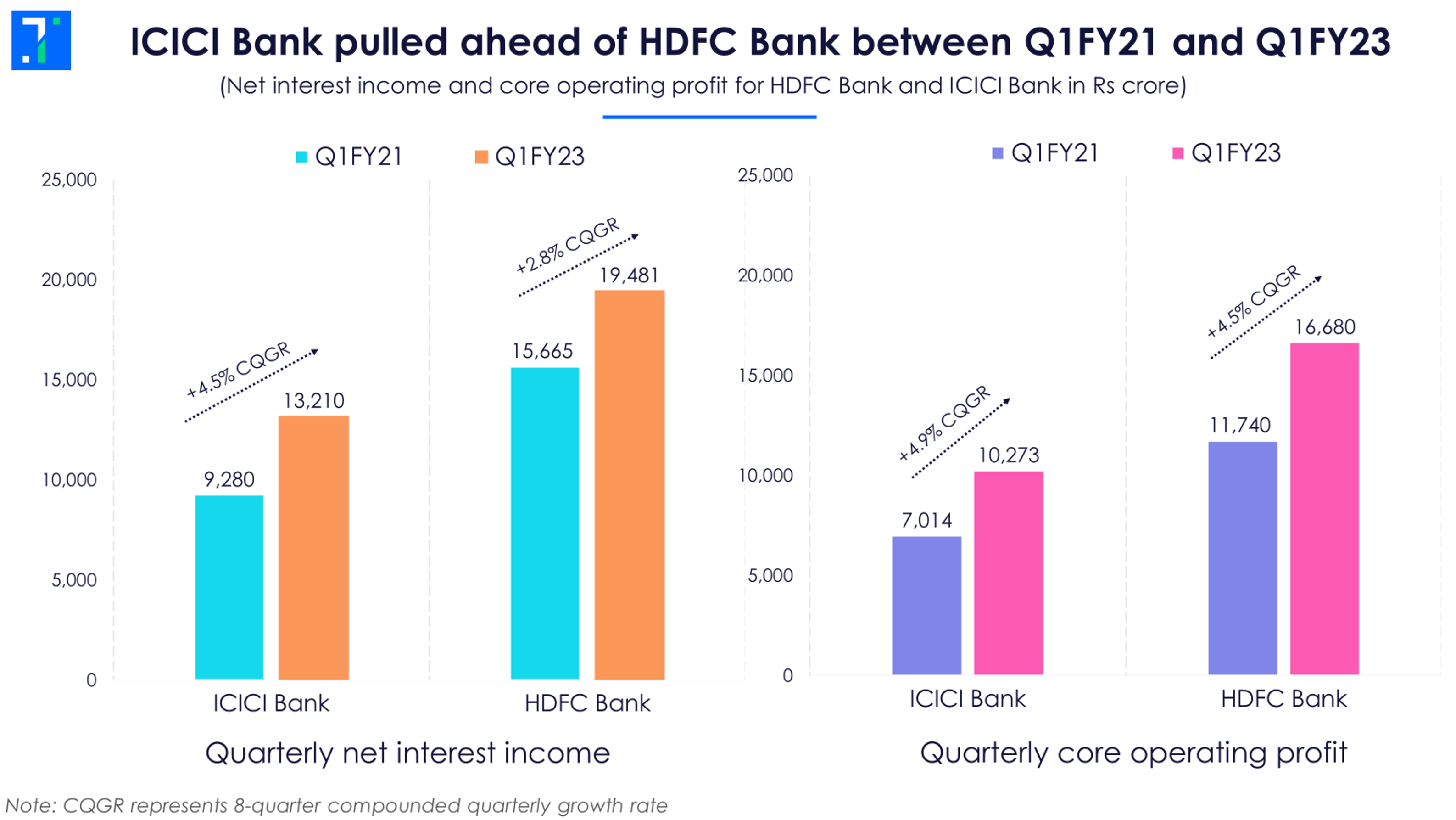 HDFC Bank’s NII growth lagged that of ICICI Bank between Q1FY21 and Q1FY23. This was owing to the slow rise in its retail advances. Sluggishness in auto and credit cards loans hurt growth in retail.

RBI had also barred HDFC Bank from fresh issues of credit cards and new digital initiatives between December 2020 and March 2022. This hit customer acquisition for the bank - and the news headlines covering the RBI ban didn’t help. It was a virtual advertisement to banking customers to go to the competition. 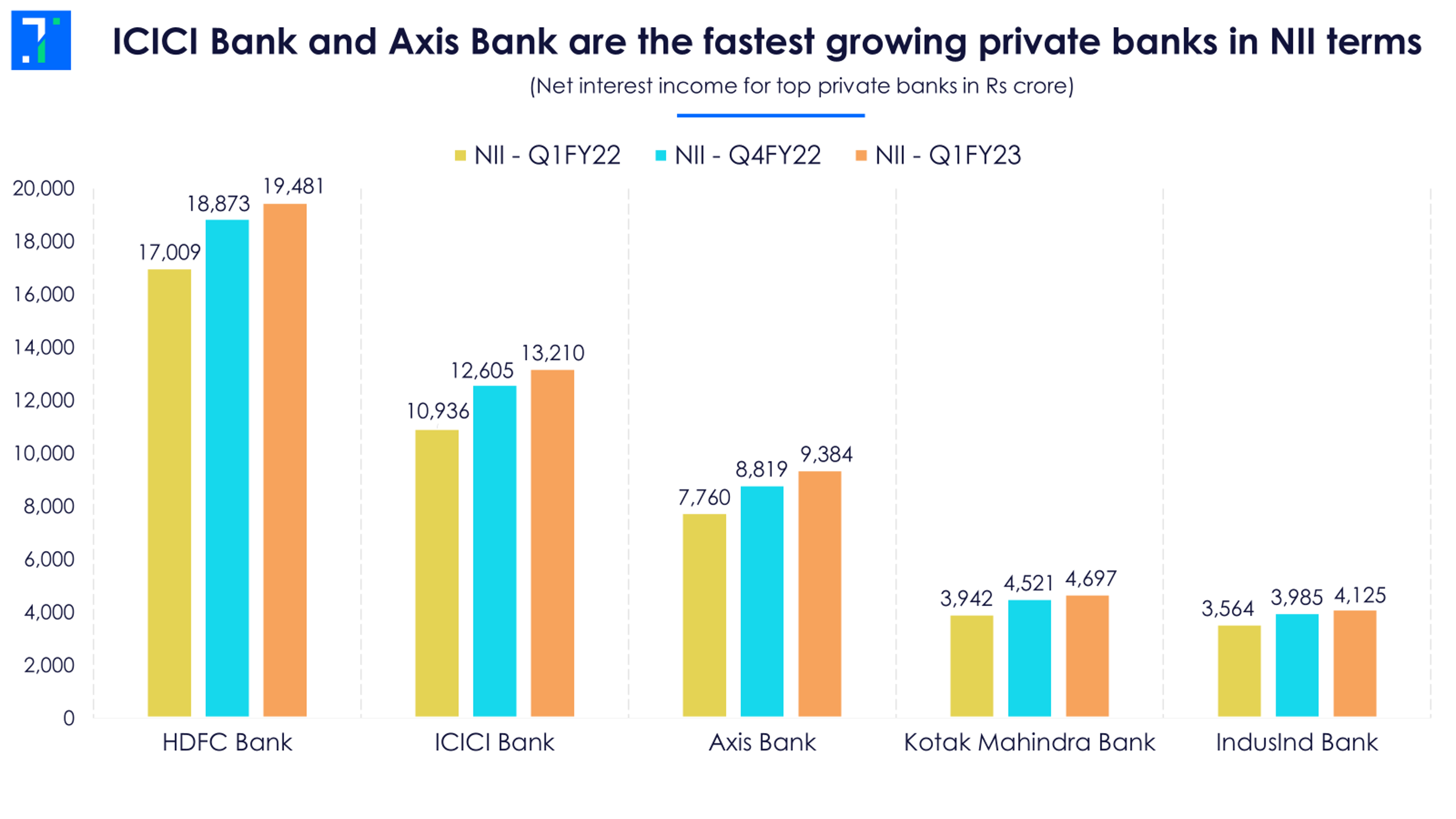 If we compare the NII growth of the top five private banks, ICICI Bank and Axis Bank stand out in terms of sequential and YoY growth in Q1FY23. HDFC Bank’s NII grew the slowest among other private banks. 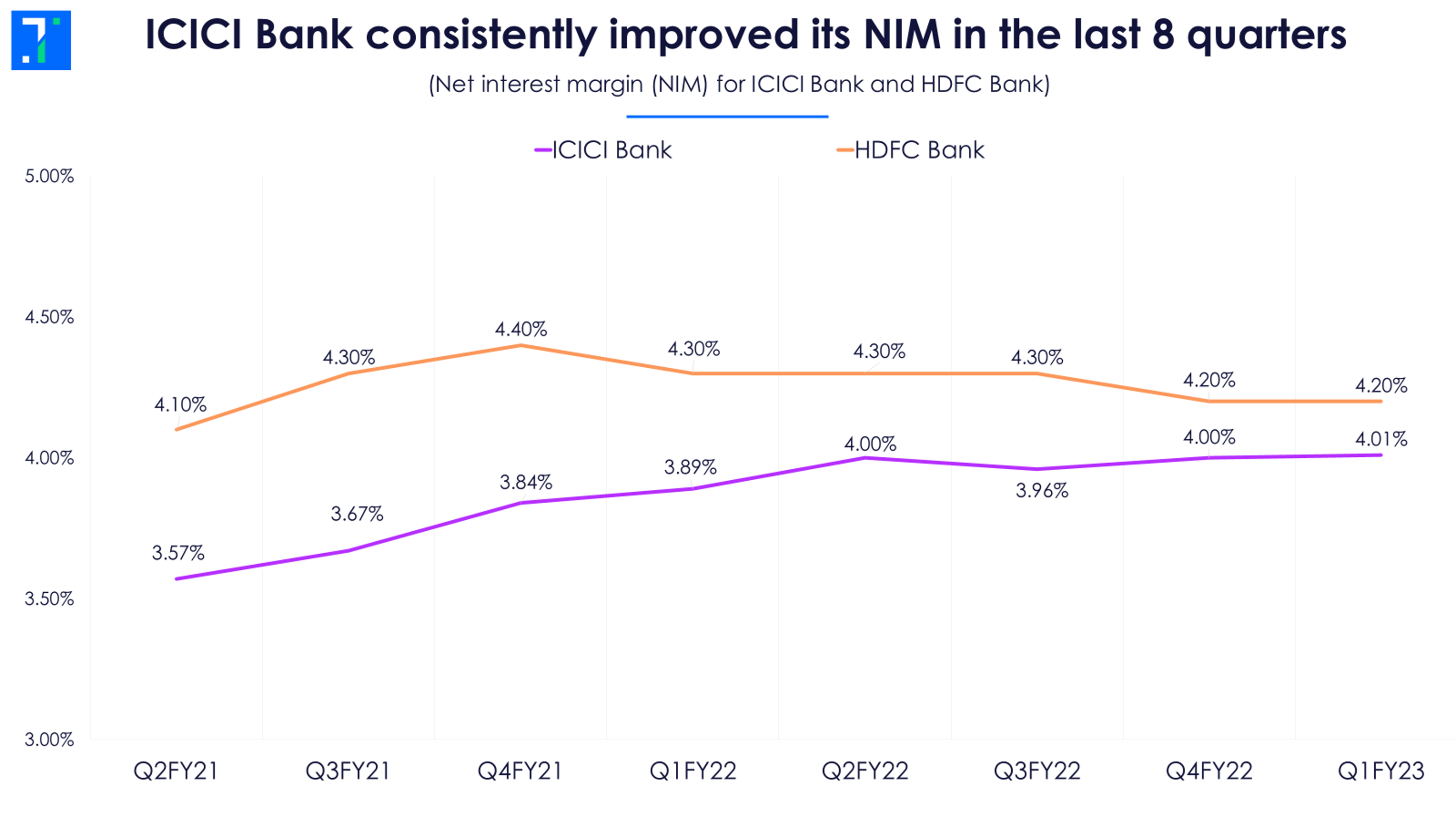 A higher share of retail loans, especially mortgages also led to a steady improvement in ICICI Bank’s net interest margins in the past nine quarters. 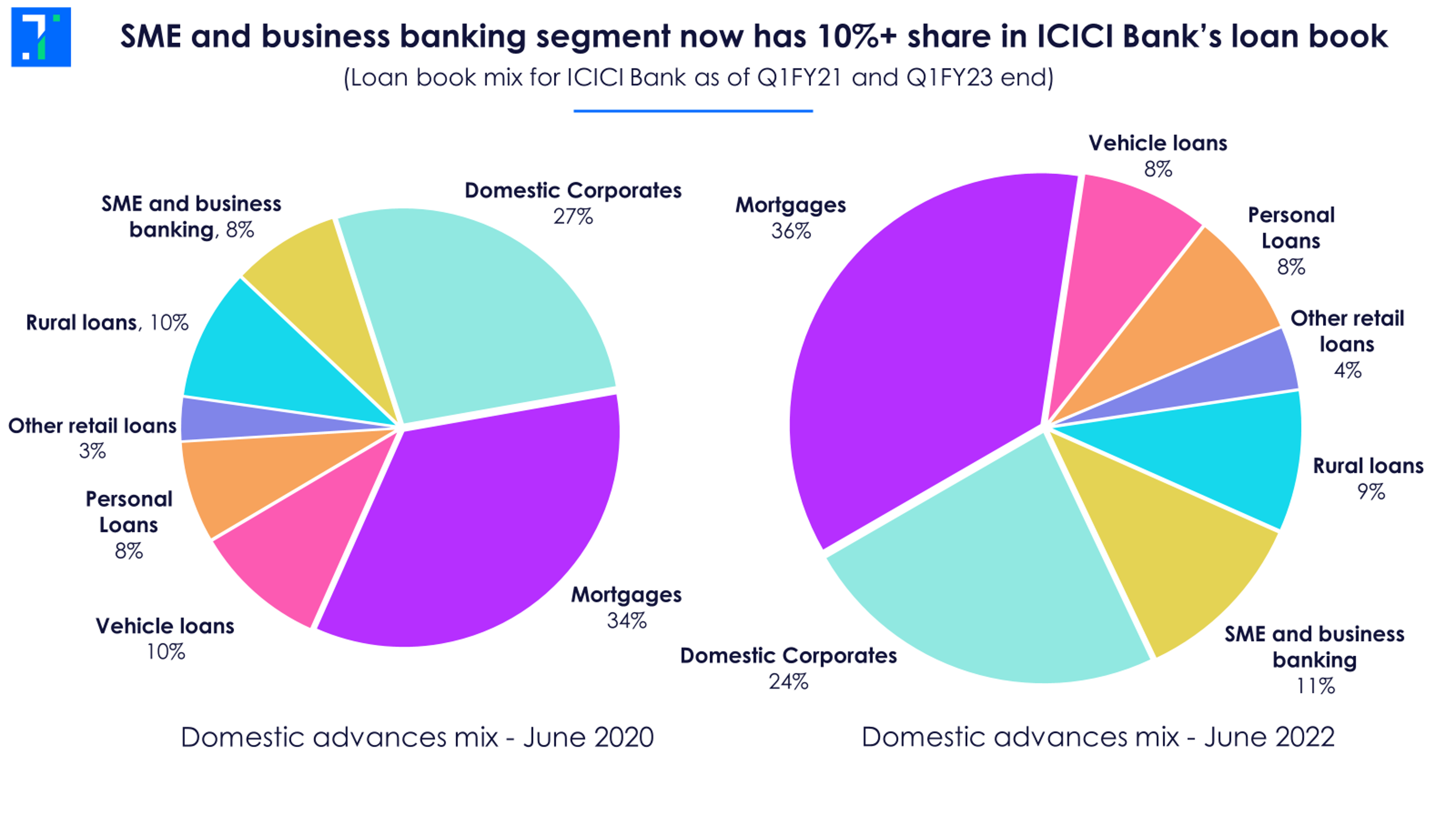 If we look at ICICI Bank's loan portfolio, mortgages as well as the SME and business banking segments stand out. The bank’s cross-selling initiatives and its digital offering InstaBIZ aided the growth in SME and business banking loans. Infact, the InstaBIZ application saw an over 55% YoY rise in the value of transactions processed through it in Q1FY23 as the bank made this platform interoperable. 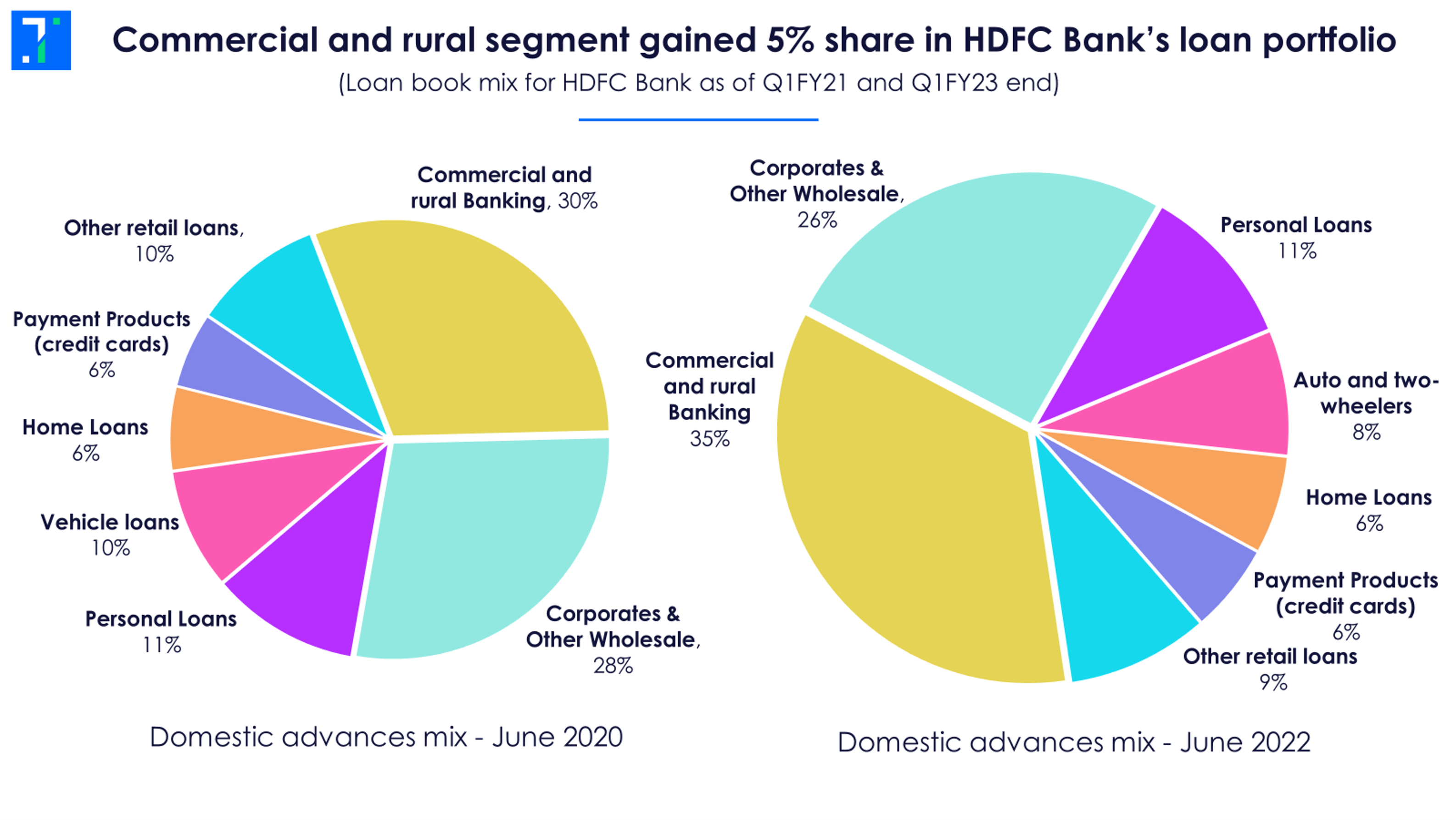 HDFC Bank sees weaker growth, but has the lowest NPAs

For HDFC Bank, the rural banking and commercial segment grew in prominence between Q1FY21 and Q1FY23. Meanwhile, the corporate segment share reduced in its portfolio, as India Inc made its balance sheet leaner during this period. According to the management, HDFC Bank also lost Rs 40,000 - 50,000 crore worth of corporate business in Q1FY23 by deciding not to lend at lower interest rates. 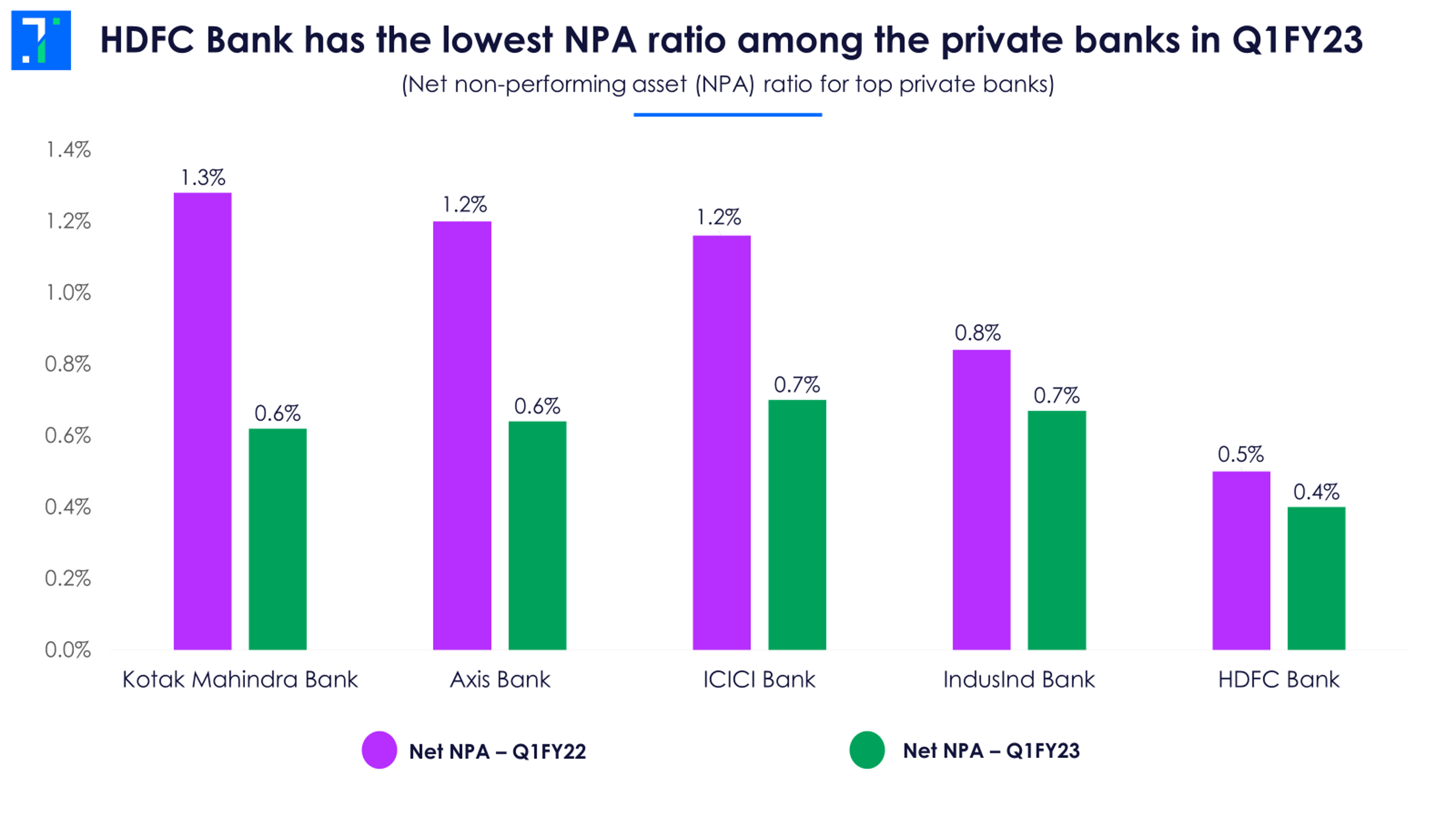 HDFC bank continues to be the clear winner in terms of its asset quality. The bank had the lowest net non-performing asset ratio both in Q1FY21 and in Q1FY23, among others. A lower proportion of riskier retail loans definitely helped the bank here.

Game on: HDFC Bank is investing in digital, ICICI Bank to benefit from rate hikes

HDFC Bank now has some serious catching up to do. Its first point of action is to increase the share of high-margin retail advances to 55% from its current 40%. When it does merge with HDFC, mortgage loans will automatically occupy a higher portion in the loans pie, helping the bank achieve its target loan mix.

A lot is happening in Q2FY23 under the bank's new CEO Sashi Jagdishan. HDFC Bank is launching ‘PayZapp 2.0’, an advanced version of its payment app, which will enable the bank to tap the retail customer base. It launched the ‘Xpress Car Loans’ app in April 2022 to improve the digital experience for customers seeking auto finance. Jagdishan hopes to transform it into a Neo bank or a virtual bank backed by such products.

HDFC Bank is also deepening its rural footprint and expanding its network coverage to two lakh villages, from one lakh currently. It sees potential in this region as banking penetration remains low at 20-25%. On an overall level, the bank is looking to double its network by adding 1,500-2,000 branches every year from FY23 till FY28.

ICICI Bank, which is already riding high on growth, will see a positive change in its NIMs with RBI hiking repo rates by 140 bps from May 2022. Nearly 70% of its loans are linked to external benchmarks and its credit costs remain benign. ICICI Bank is also seeing good credit demand in the retail segment, but sounded some caution for quarters ahead given the interest rate rise.

All in all, the dynamics within the sector may change again in next 3-5 years as HDFC Bank works to reclaim its top spot in terms of growth. It has an ambitious target of doubling its balance sheet size on a merged basis in this period. The Rahul Dravid of the banking space is firmly set on the pitch after some yorkers, and is now hoping for a successful innings. 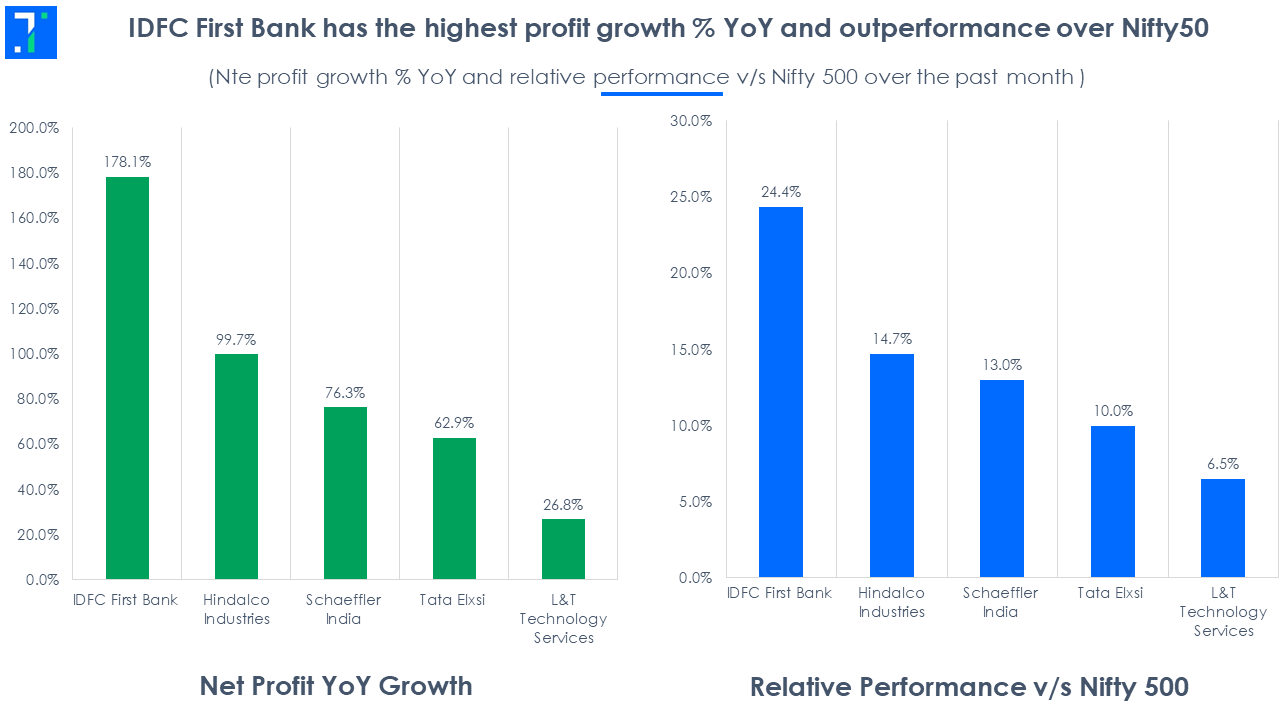 As most of the results for Q1FY23 are out, we take a look at companies whose net profits consistently grew in the past four quarters, have low debt and outperformed the Nifty 500 index in the past month.

IDFC First Bank clocked a net profit of Rs 485 crore in Q1FY23 as against a loss in Q1FY22 on lower provisions and higher NII. This banking stock outperformed the index by over 24 percentage points in past month.

Hindalco Industries comes in next with a 2X rise in its net profits in Q1FY23, led by healthy sales realizations. It recorded consistent net profit growth in the past four quarters and outperformed the Nifty 500 by over 14 percentage points.

Meanwhile, Tata Elxsi’s net profit grew by over 60% YoY in Q1FY23 on robust demand from foreign automotive OEMs. Despite its pricey valuations, the stock has outperformed the index by 10 percentage points in past month.

Signing off this week,