When Infosys’ CEO Salil Parekh took over the reins of Infosys three years ago, he had charted out a roadmap of growth till 2020-21. And despite the impact of the pandemic on the company’s performance in the first half of the FY21, Infosys will probably end up outpacing its larger peers in terms of revenue growth.

Over the past one year, Infosys share price has risen over 70%, more than the 60% of the Nifty IT index. The company’s stock is on a roll on the back of robust consistent performance the last couple of quarters. The recently announced December quarter results were expected to be strong and healthy for the IT industry landscape, especially the ‘Big 4’– TCS, Infosys, Wipro and HCL Tech.

These stocks hit their 52-week highs before their December quarterly results were announced. In the group, Infosys had the best September quarter. Written off as second best to TCS for many years now since losing the bellwether crown in the early 2000s, Infosys outperformed the market leader in FY20. and delivered its best December quarter in the past eight years. 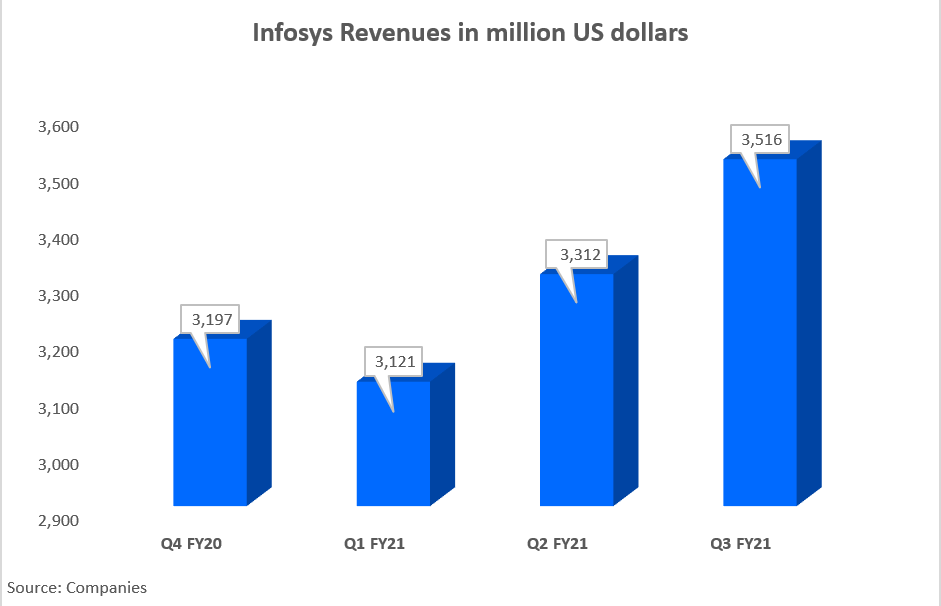 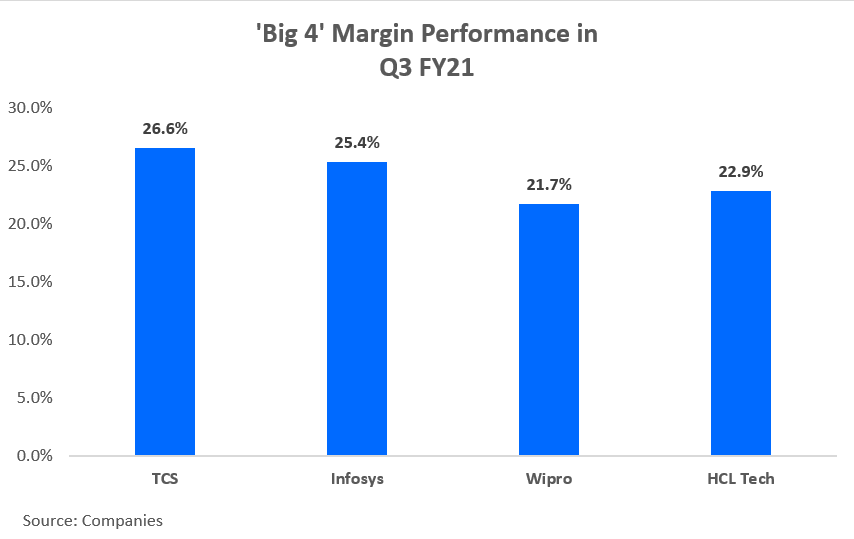 Speaking on the Q3 results, Pravin Rao, Chief Operating Officer of the company said that growth was driven by large deal wins, low attrition and robust operating metrics. With respect to Covid impact, he added, “The global pandemic has gone from threat to opportunity as clients have gained confidence in their own resilience and now embrace the opportunity to accelerate an often-radical re-imagination of their own businesses”.

Infosys is the star performer among the ‘Big 4 Indian IT services companies in Q3 FY21. India’s second largest IT company reported the highest dollar revenue growth both sequentially and YoY in constant currency terms. On a year-on-year basis, TCS’ revenue growth was flat, HCL Tech rose 1.1% and Wipro’s revenues fell at the same rate YoY.

The retail vertical reported positive sequential growth, continuing its momentum from the September quarter, Retail vertical’s revenues (15% of total) rose 2% YoY despite seasonal softness. For communications vertical (12% of revenues), growth was flattish though management is optimistic on the overall scenario. Even media & entertainment saw softness in revenues.

In energy & utilities vertical with 5% YoY growth (12.5% revenues), while utilities remained steady. There is  some  stress visible in oil & gas, publishing, travel & hospitality.  Manufacturing vertical (9% of revenues) saw a 4.1% fall in revenues. The management said manufacturing witnessed a standard quarter both in terms of revenue and deal signings despite continued disruption across its subsegments.

The recently won Daimler deal comes under the manufacturing vertical and as this deal ramps up, there will be strong revenue momentum. And lastly hi-tech (8% of revenues) and life sciences (7% of revenues) grew exceptionally well at 17% and 11% YoY, respectively in Q3.

In terms of regions, Americas grew negatively for both TCS and Wipro, while HCL Tech reported 2.2% YoY growth, Infosys (US revenues 61% of total) grew 9% YoY in constant currency terms in the December quarter. European revenues were flat, while India revenues rose 4% and rest of the world grew 6% YoY. 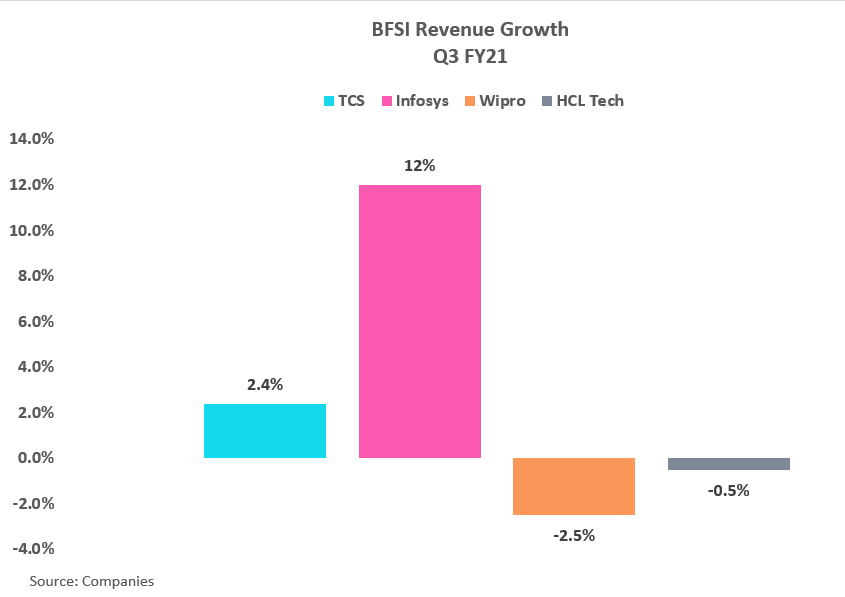 When he took over as CEO, Salil Parekh had focussed on four strategic levers to revive growth—scaling up digital business, focussing on large deal wins, cost efficiency measures and re-skilling of its employees. These have helped Infosys in the present volatile Covid scenario with all these strategic levers providing the requisite resilience and robust growth momentum.

Infosys has long had a fondness for jargon and complex visualizations in its strategic plans, and its annual and strategy reports are beautifully produced, award-winning documents. But now it has begun following through in implementation. In 2018, to accelerate its digital business, Infosys laid down a ‘five-dimensional digital pentagon’ – experience digital (user interface), providing insights through Artificial Intelligence (AI) platforms and big data, building innovation, accelerate transformation of clients legacy systems through cloud applications, and assuring security of networks and systems (cyber security).

Early investments in data, analytics, cloud, Saas, cybersecurity, AI, machine learning have helped Infosys to become more relevant to the present digital transformational agenda of its clients. Consequently, digital revenues which were about 25% by the end of FY18, now stands at 50% of the entire revenue mix. Digital revenue growth has been above 25% for the past seven quarters. The company reported 34% YoY growth in Q3 FY21.

Moving on to large deals, deal wins doubled YoY in FY19 to $ 6.3 billion and rose to $ 9 billion in FY20. For the nine months ended December 2020, large deal wins were about $12 billion, with net new deals of about $ 8 billion, positioning the company very strongly for the quarters ahead.

The company also aimed at a cost savings of $ 150 million for FY20 and has exceeded that target. The plan for cost savings in FY21 is on similar lines. Infosys has employed strategic cost levers of automation, pyramid rationalization, subcontractor costs and onsite-offshore mix for tight cost management leading to robust margin performance.

Consequently, operating margins have increased from 20% levels in Q1 FY20 to 25.4% in December quarter FY21. Though the company has restrained from giving margin guidance for FY22, even with the gradual return of travel, promotions and other discretionary spend, the strategic cost levers will maintain a stable margin trajectory.

And lastly as technology shifts gain rapid acceleration, Infosys has been re-skilling its workforce in new areas of digital services. For instance, the company has developed a learning platform called Lex, that allows its employees to access learning content from anywhere, from any device, at any time, and learn at a time convenient for them.

The management is extremely confident on its future prospects with large deal wins of $ 7.13 billion in Q3 FY21 with 73% net new deals. In fact, net new deals in Q3 FY21 are more than 1.5 times of deals signed in the entire FY20. 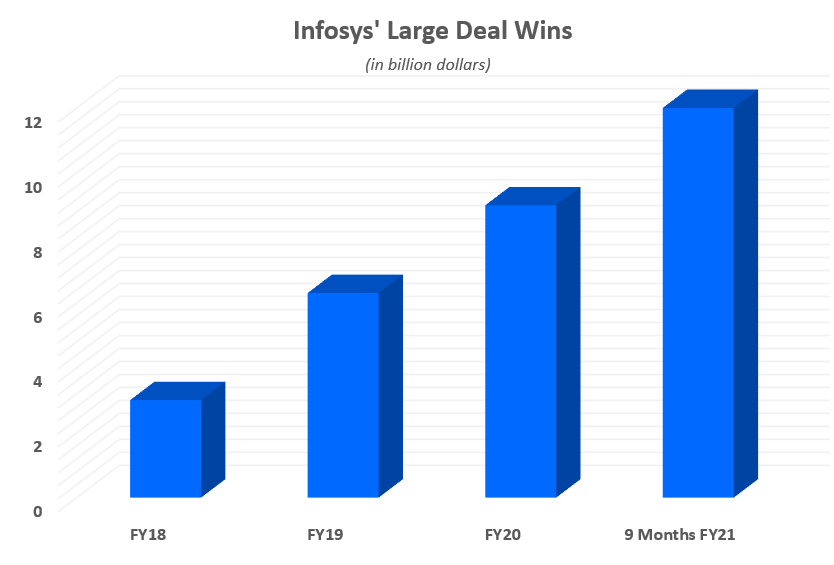 A large proportion of these new deals will start contributing to revenues from Q2 FY22. The management has also increased its revenue growth guidance for FY21 to 4.5-5.0% from 2-3% in constant currency terms. It had also indicated that FY22 would see double-digit growth in FY22. But, there is still a long way to go for Infosys to catch up with the market leader TCS.