While it won’t have the limelight of its technology predecessors, the public offering of Chemcon Speciality Chemicals is expected to be strong. At the intersection of two promising industries, especially in a post-COVID world, pharmaceuticals, and oilwell chemicals, the company’s opening show should reflect the industries it represents.

Chemcon Specialty Chemicals was incorporated in 1988 in Vadodara, Gujarat, the company has been around a lot longer than some of its market competitors. The company’s products include oilfield and pharmaceutical chemicals, as well to contract manufacturing of the same. In addition to the domestic market, the company exports its products to 11 countries, including the United States, Russia, Germany, China, South Korea, Japan, Spain, Thailand, Malaysia, Serbia, and the UAE.

The company serves key players in the pharmaceutical business including Laurus Labs, Aurobindo Pharma, Lantech Pharmaceuticals, Macleods Pharma, Hetero Labs among others in its pharma chemicals division. On the oilfield chemicals side, its customers included Shree Radha Overseas and Universal Drilling Fluids.

With the pharmaceutical industry and the specialty chemicals industry moving up by 46.5% and 38.3% respectively over the past three months, Chemcon Speciality Chemicals has strong investment potential. The company’s IPO is scheduled for 21 September to 23 September, with the objective to raise Rs. 318 crore in a fresh issue of 93.5 equity shares.

With a price-band of Rs. 338 to Rs. 340 per share, the fresh issue will amount to between Rs. 316.1 crores to Rs. 317.9 based on the upper and lower price range. The issued subscribed and paid-up share capital of the company before the public issue is 31.7 crores at a face value of Rs. 10 per share, bringing the aggregate value to Rs. 317.7 crores of the fresh issue.

As per the company’s draft red herring prospectus, the fresh issue of equity shares will be based on an offer for sale of up to 45 lakh shares, which would come from two promoters selling their stake in the company. 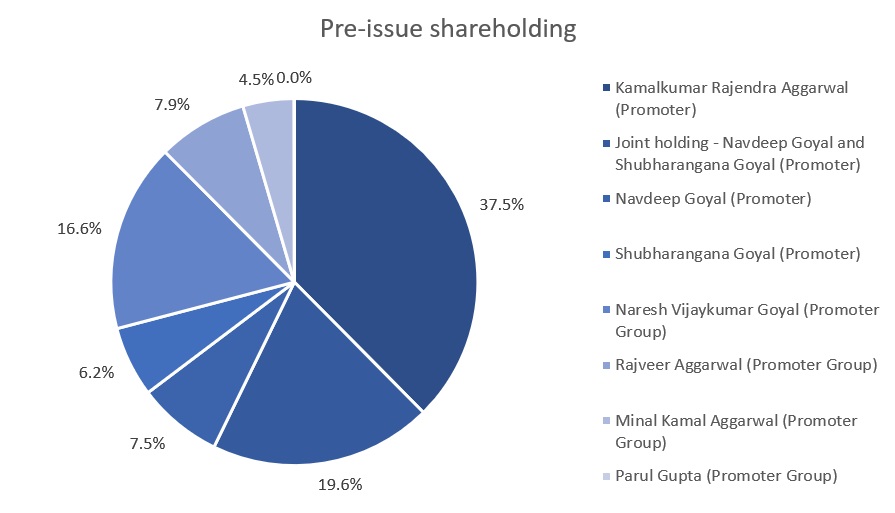 The company has not specified the division of the shareholding post the issue. However, they have mentioned that the two selling promoters are Kamalkumar Rajendra Aggarwal and Naresh Vijaykumar Goyal who hold 11.9 crores and 52.8 crore shares respectively, at a total of 54.1% of the share capital of the company.

Intensive Fiscal Services and Ambit Capital are the book running lead managers to the issue.

According to the RHP, the proceeds from the issue will be used for capital expenditure towards the manufacturing facility at Manjusar, Vadodara, at an estimated Rs. 41 crores, to meet working capital requirements estimated at Rs. 90 crores, and for general corporate purposes at an unspecified amount. As of July 2020, the total volumetric reactor capacity at the company’s manufacturing facility was 374.8 kl, part of the proceeds from the fresh issue will be used to build two plants with a total volumetric reactor capacity of 251 kl, and one laboratory. 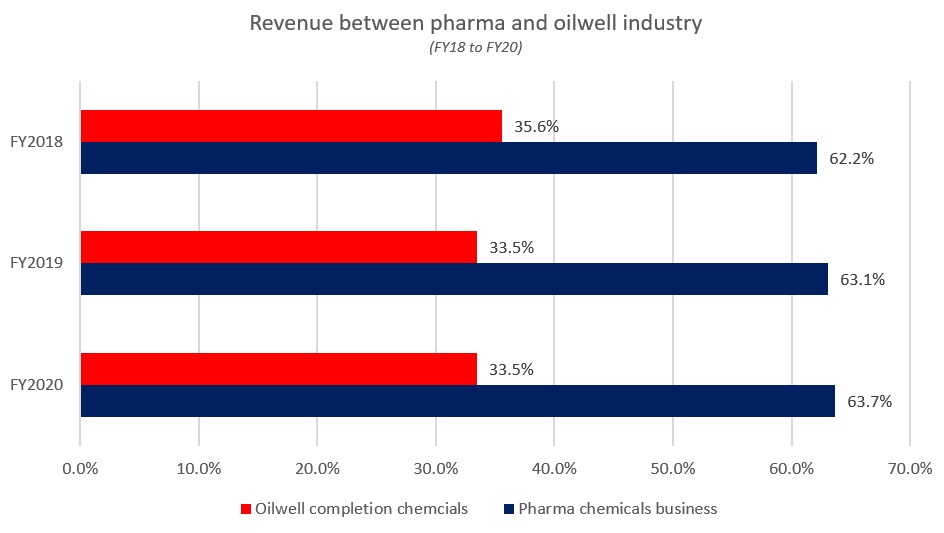 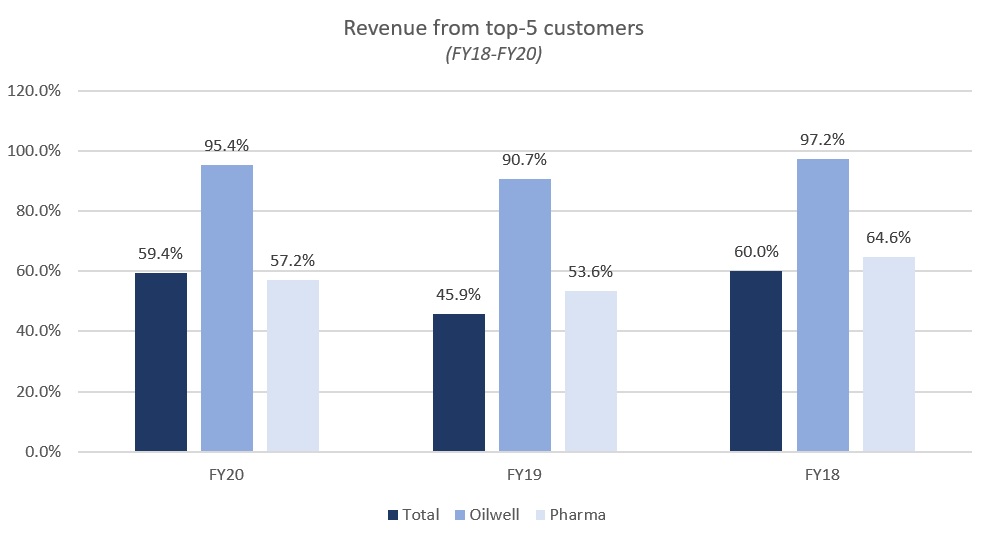 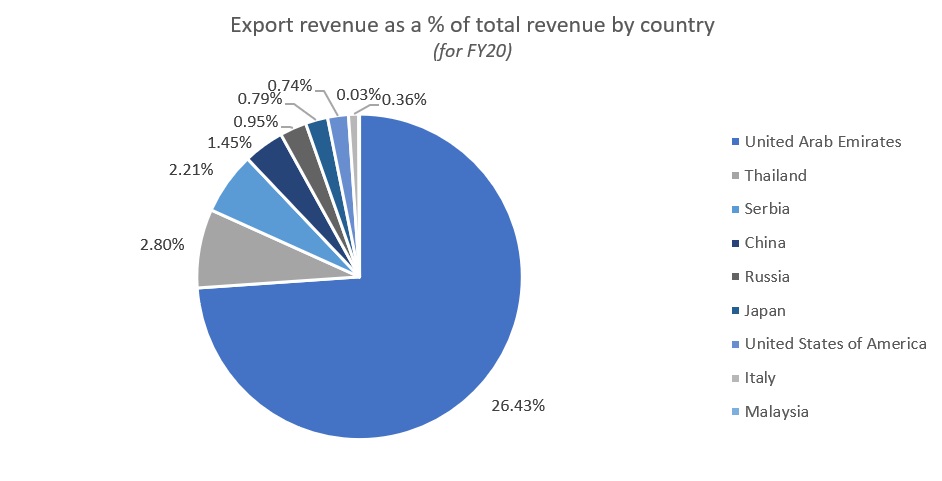 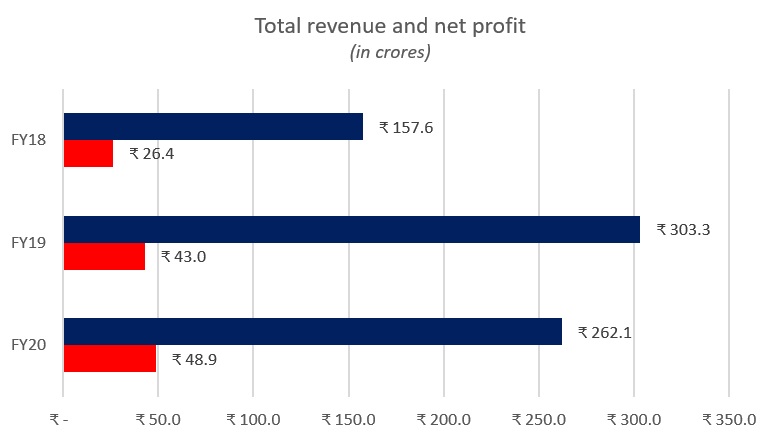 Taking the higher price band of Rs. 340 per share and the most recent EPS at Rs. 15.3 the company’s price to earnings ratio comes to 22.2 times.

For an industry estimate, the company has taken an average PE of 31.3 times, with a higher extreme of 43.7 times and a lower extreme of 19 times.

Here’s how Chemcon’s PE compares to its competitors in the specialty chemicals industry.

The pharmaceutical industry has seen massive growth in the past few months amid the pandemic. Indian pharmaceutical companies have seen their stock price rise by 46.5% in the past 3 months, and by 91% in the past one year. The company is in a unique position of supplying essential chemicals to this growing industry.

Between 2020 to 2023, the global market of chemicals used by pharmaceutical companies is expected to grow at a CAGR of 4%, the market is currently valued at $27 billion (~Rs. 1.9 lakh crores). Two major factors that will drive pharmaceutical drugs over this period is the burden of diseases and an increasing geriatric population.

In terms of the current geographic competition, the company mentioned North America as the biggest and most attractive market with a strong pharmaceutical presence and capable infrastructure. Europe is the second largest market and is expected to steadily expand during the forecasted period. The Asia Pacific market is also expected to grow steadily because of a larger number of contract manufacturing organizations.

Looking at the domestic market, the annual consumption of chemicals by pharmaceutical intermediaries was Rs. 32,000 crores for FY19, which represented a 7% CAGR since 2013. Between 2020 to 2023 drug production (including exports) is expected to increase by the same CAGR of 7%.

Imports have dropped from FY13 to FY19 from 65% to 58%. The primary reason for the drop was due to the expiry of patents and withdrawal of customs duty exemptions on drugs and intermediaries in FY17. China dominates the import of bulk drugs, but exports from the country have been declining for the past 2-3 years, because of tougher regulations on pollution causing industries in China.

Similar to the market for pharmaceutical chemicals, North America dominates the clear brine fluids market as well. The region makes up for around 65% of the market. Asia Pacific holds 15% of the market and is likely to witness robust growth for brine fluids because of the strong presence of shale reservoirs. In the Middle East region, countries like Libya, Syria, Egypt and others have large oil and gas reserves which has led to the growth of its market. The Latin American countries of Brazil and Argentina are also expected to see moderate growth in the coming years.