Moneycontrol
Arihant Capital has come out with its report on Sona BLW Precision Forgings. The research firm has recommended to ''Subscribe'' the ipo in its research report as on June 14, 2021.
Share
Share on With earnings season coming to a close, many initial public offerings (IPOs) are set to test the market’s appetite for primary share sales. The third company to launch its IPO in FY22 is Sona BLW Precision Forgings (Sona Comstar) an auto components manufacturer. Sona Comstar’s IPO will open ...

With earnings season coming to a close, many initial public offerings (IPOs) are set to test the market’s appetite for primary share sales. The third company to launch its IPO in FY22 is Sona BLW Precision Forgings (Sona Comstar) an auto components manufacturer. Sona Comstar’s IPO will open on 14 June, the same day as Shyam Metalics and Energy.

The company makes assemblies, gear sets and batteries for commercial vehicles (CVs), passenger vehicles (PVs) and tractors. In the past two years, the company began manufacturing batteries for electric vehicles (EV). This segment with its export focus (70% of FY21 revenues), makes it an interesting play in the auto components space.

Sona Comstar’s promoters are Sunjay Kapur, the chairman of the company, and the Kapur family’s holding company - Sona Autocomp Holdings. Post the IPO, the promoters will hold 48.4% of the company. Currently, promoters hold 33.7% of the firm, and private equity (PE) firm Blackstone Group (Blackstone) holds 66.3%.

The auto components company’s IPO issue size is Rs 5,550 crore, divided between a fresh issue worth Rs 300 crore and an offer for sale (OFS) by Blackstone worth Rs 5,250 crore. The IPO price band is Rs 285-291 per share. Post the issue, at the upper end of the price band, Sona Comstar will be valued at Rs 11,700 crore. 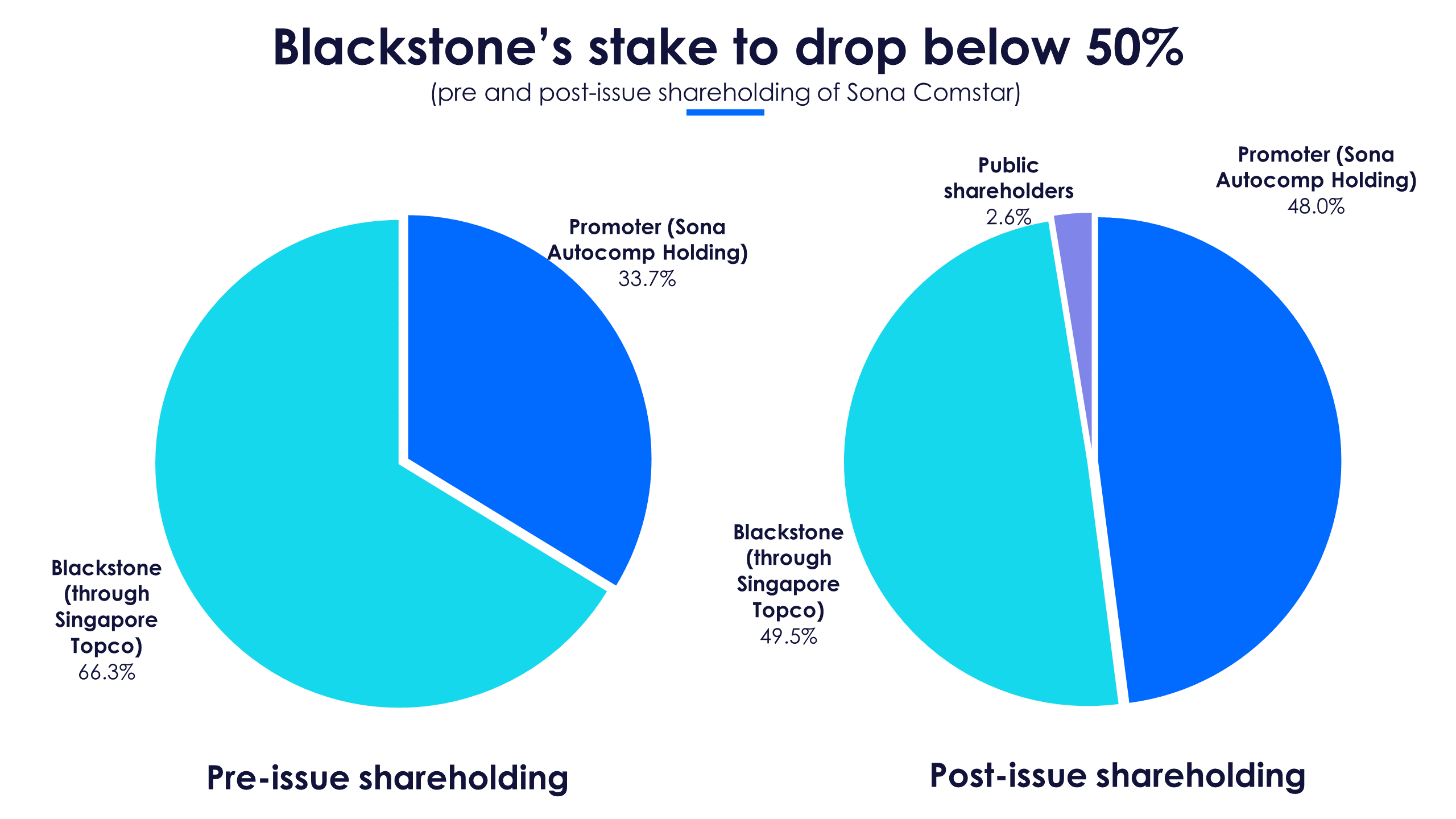 Through the OFS, Blackstone will reduce its stake in the company to 49.5% from 66%. It will sell its shares for a profit of Rs 4,667 crore, a 9X growth on its acquisition at Rs 32.3 per share. Three of the eight members on Sona Comstar’s board are from Blackstone. The company did not mention any change in control post the IPO.

From the proceeds of the fresh issue of Rs 300 crore, 80% or Rs 240 crore will be used to repay loans. The rest will be used for general corporate purposes. Taking the upper end of the Rs 291 price band, Sona Comstar is valued at 77.4 times its FY21 earnings. 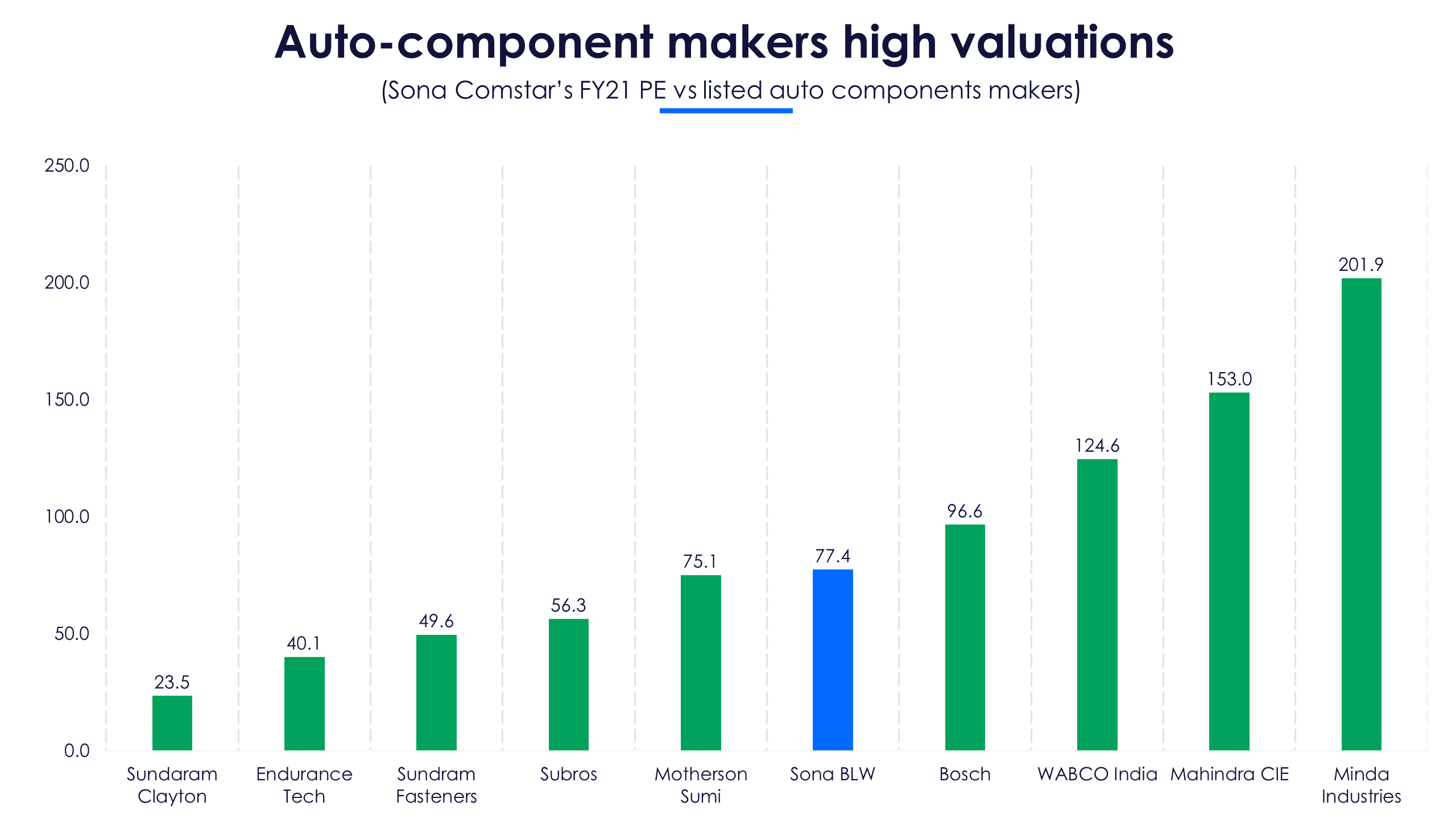 Over 70% of the company’s revenues come from exports to North America, Europe, and China. Overseas customers include Daimler, Renault-Nissan, CNH Industrial, Linamar, and Kubota. Between FY19-21, the share of the revenue from the North American market dropped to 36% from 42%, and it increased to 8% from 2% from the Chinese market. 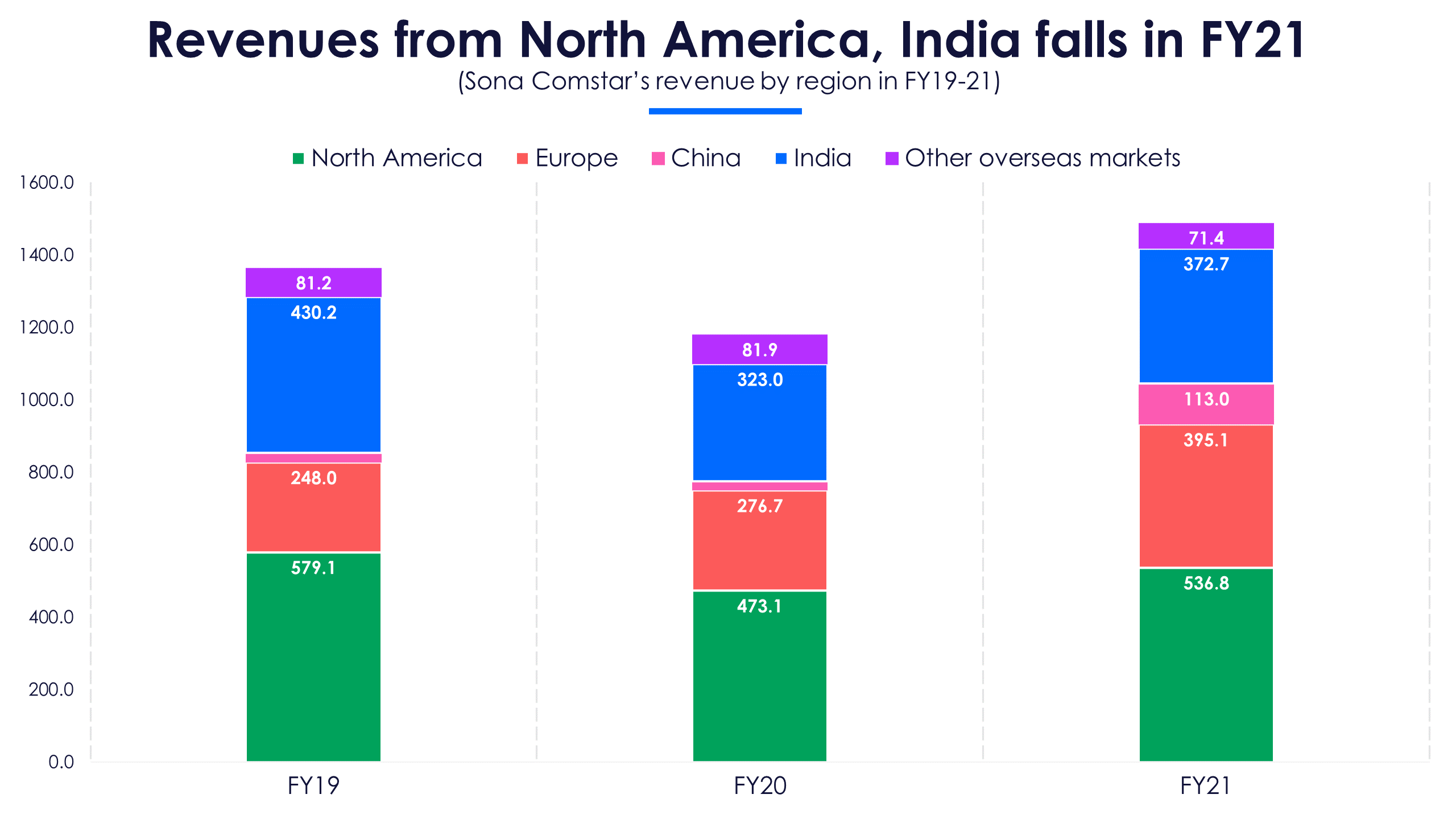 Sona Comstar makes auto components products that are divided into two segments. First, system and components, which consist of individual components (like differential assemblies, gears, and motors). Second, drivetrain components used to power a vehicle’s wheels. In the systems and components segment, the main revenue generator is micro and micro-hybrid motors (27%), primarily used in EVs. 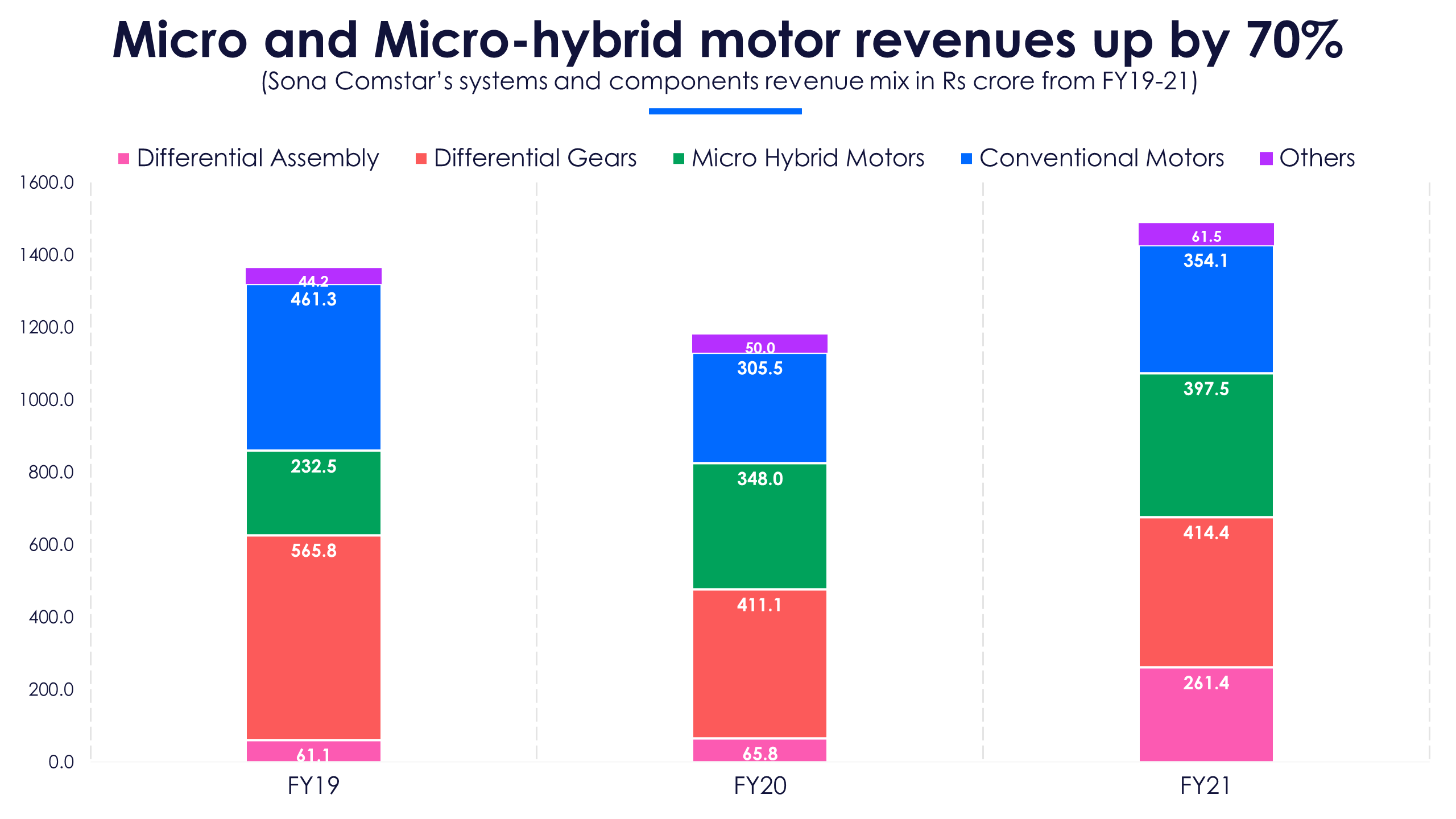 The company’s fastest-growing powertrain component is the production of batteries for EVs. In FY21, revenue from EV batteries was Rs 205 crore, an 8.8x growth YoY, contributing to 14% of annual revenues. Powertrain components also contain neutral power source products which include assemblies with varying rotation speeds. This contributed 35% to powertrain revenues at Rs 512 crore, a 4% growth YoY in FY21. 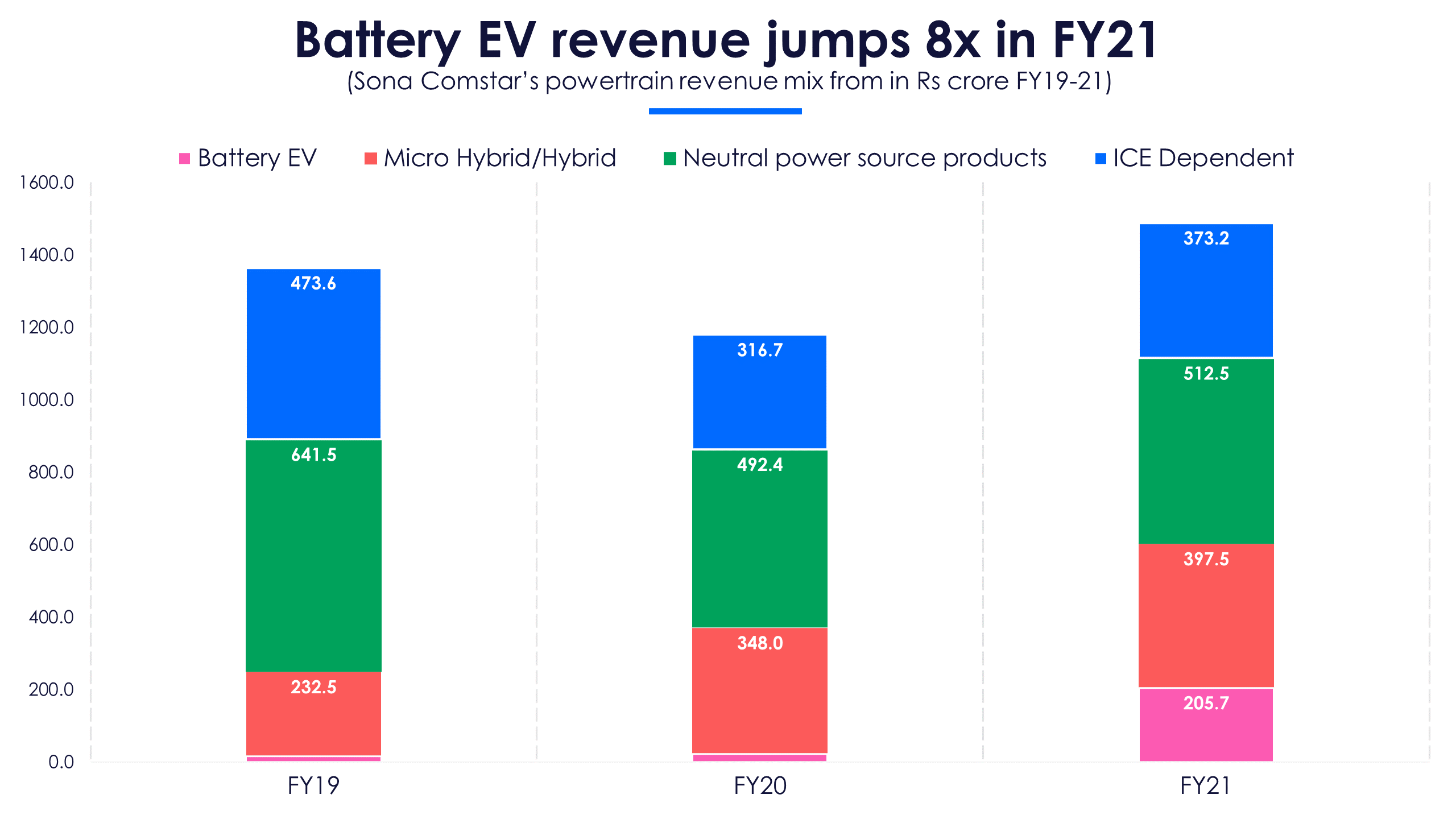 In FY21, Sona Comstar’s cash flows from operations were Rs 143 crore, a 42% decline YoY due to a 25% rise in finance costs. Capital expenditure (capex) was maintained at Rs 220 crore in FY21. The lower operating cash flows and unchanged capex lowered the company’s free cash flows in FY21 resulting in negative free cash flows of Rs 76 crore. 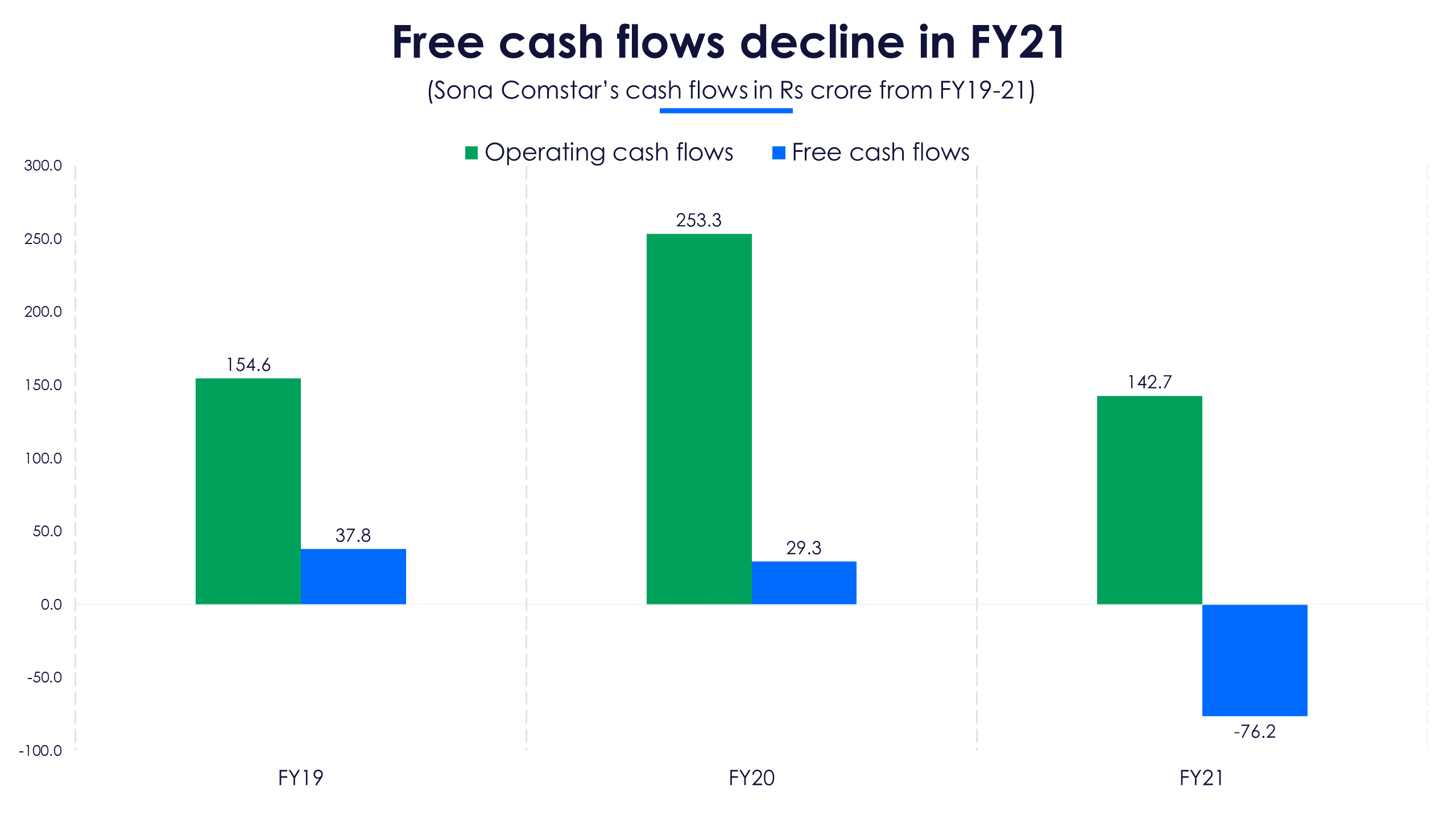 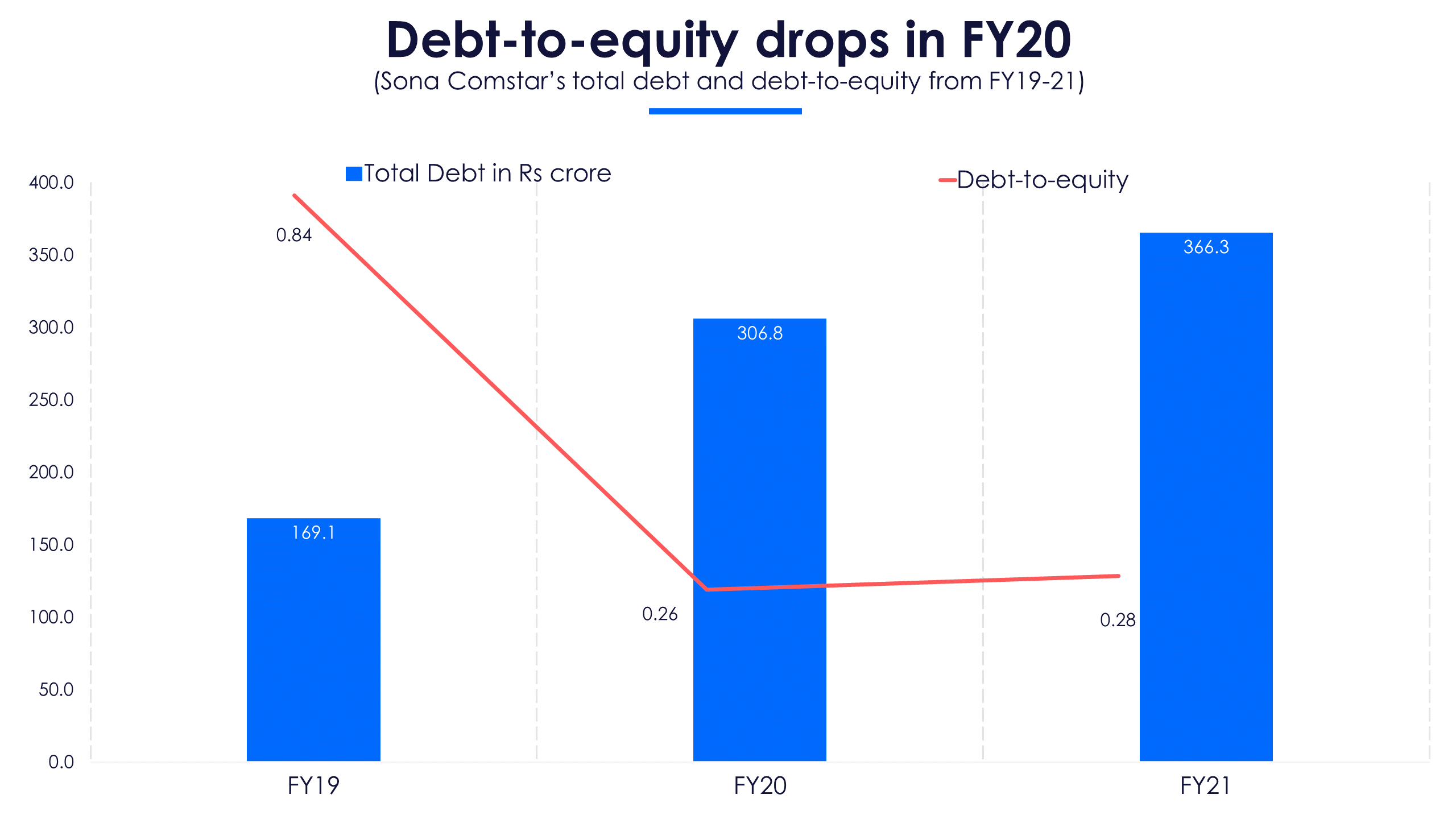 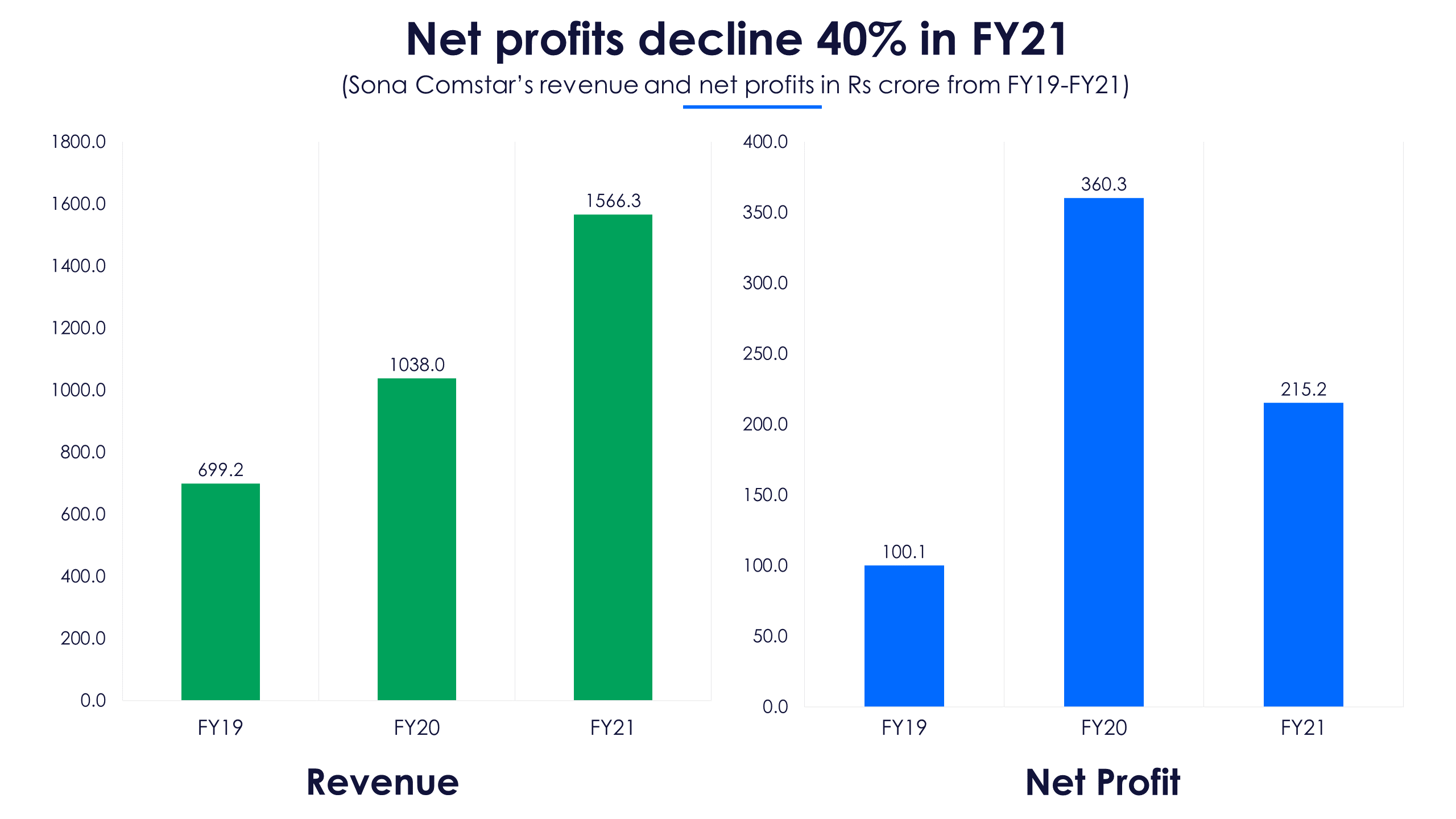 In Q1FY21, revenues fell by 54% QoQ to Rs 135 crore. This was on a low base as exports were hindered in Q4FY20 because the pandemic halted global supply. In Q2FY21, revenues beat pre-Covid levels and continued to increase in each quarter of FY21 as the commercial activity recovered. 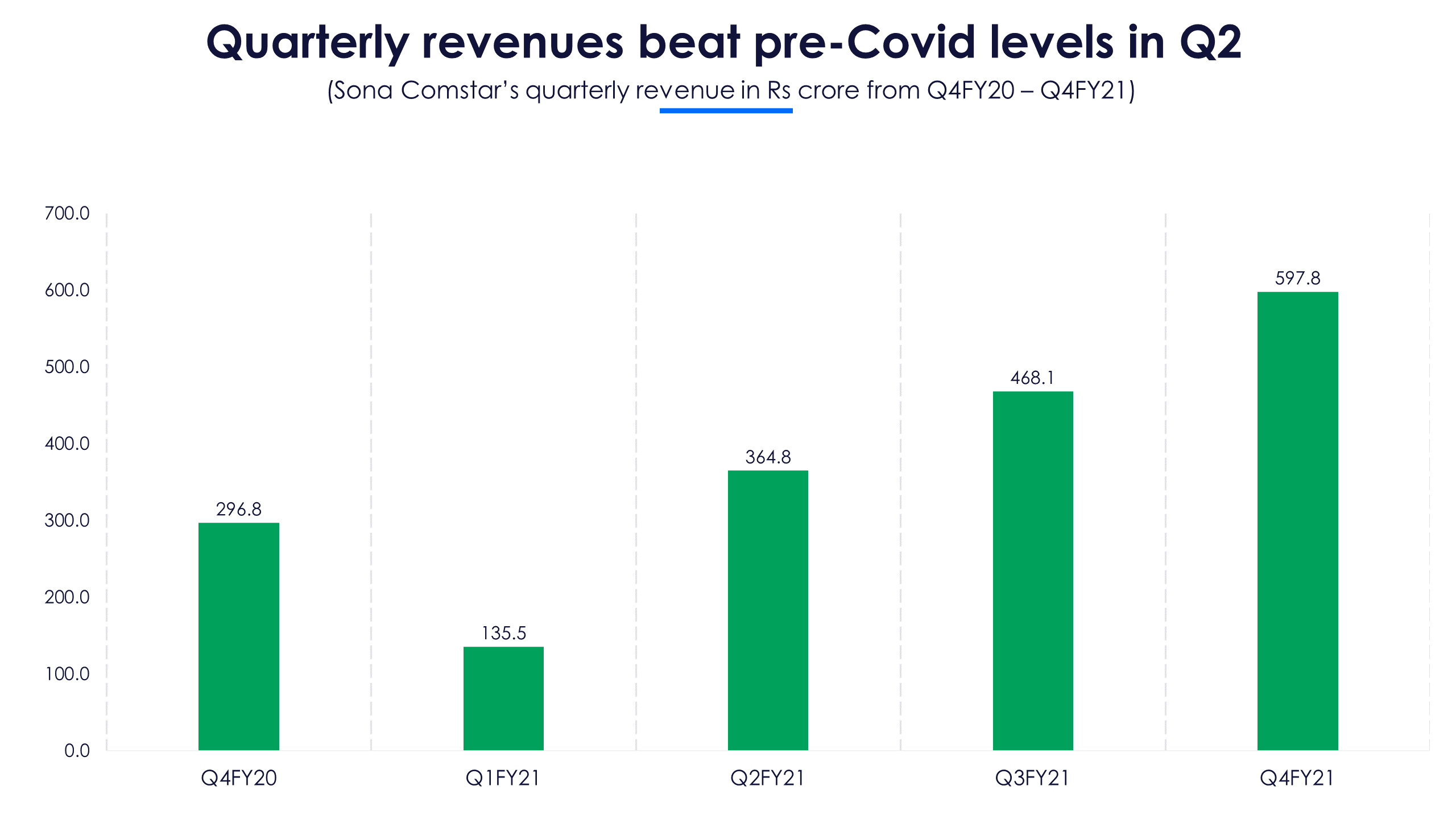 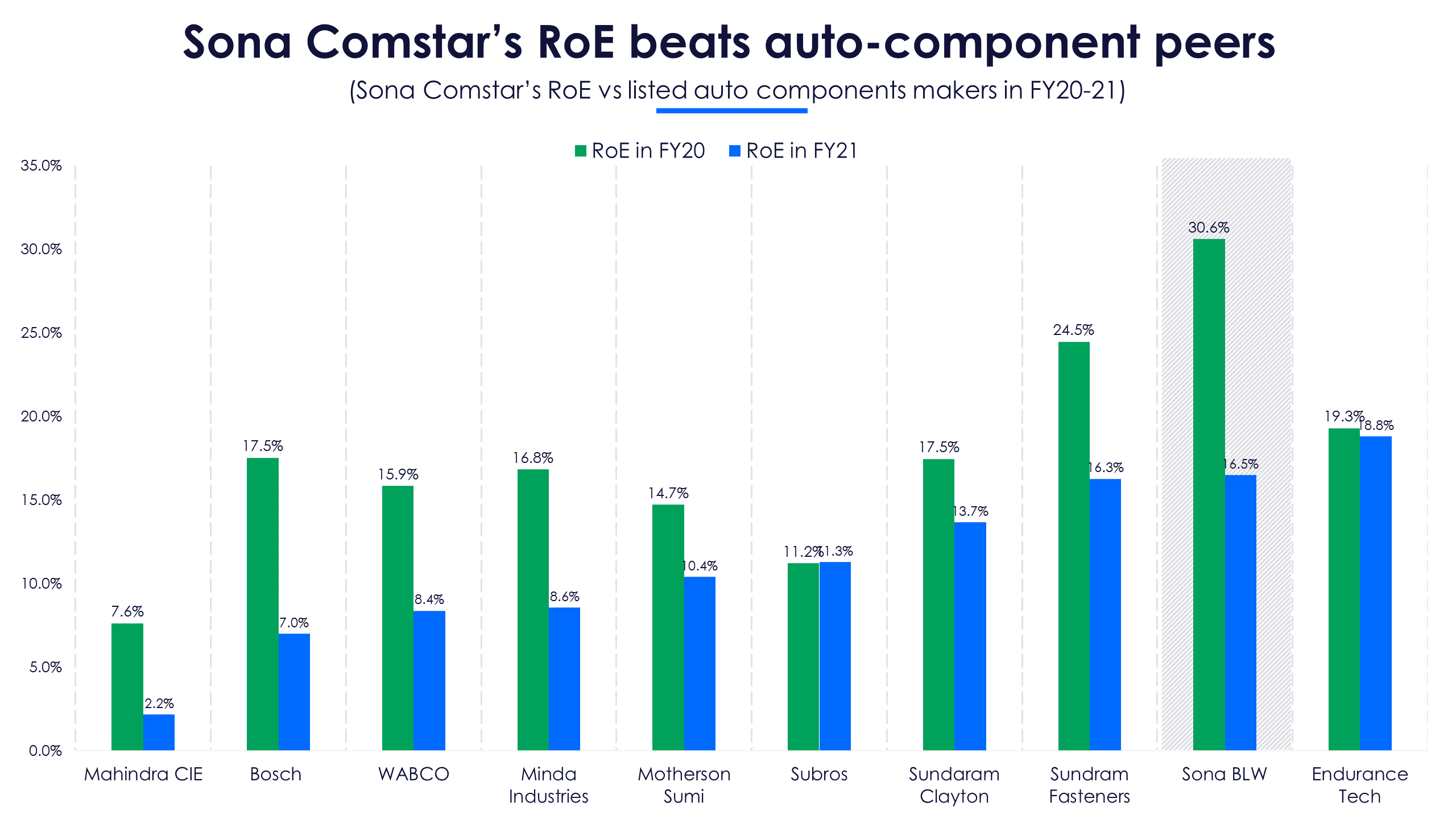 The global batteries market for EVs grew at a compounded annual growth rate (CAGR) of 46% between 2015 to 2020 to Rs 2 lakh crore. It is expected to grow at a CAGR of 36% between 2020-2025. The EV batteries and micro and micro-hybrid motors’ market growth will help Sona Comstar’s exports as the Chinese, European, and US governments have introduced regulations to promote EV usage over fuel-powered vehicles.

The company is shifting its focus to EV batteries and micro and micro-hybrid motors because of the market’s expected growth. It’s also banking on exports (70% of annual revenues) to countries promoting the use of EVs. Sona Comstar’s export focus will be helped by the Rs 57,000 crore production-linked incentive scheme for the automobile sector. This is expected to help export-focused auto component makers like Sona Comstar.

While the EV market’s potential is high, the company’s financials remain questionable. Cash flows are negative, and in order for the company to invest in capex, it will take on debt. That said, its debt-to-equity remains low (0.28 in FY21) and the IPO proceeds will reduce debt further.

Other EV auto-components companies do not provide an immediate threat to Sona Comstar. This is because these companies are either focused on two-wheeler EVs, like Greaves Cotton through its clean technology partnership with Ampere EV, or produce lithium-ion batteries for three-wheelers like Amara Raja Batteries. While these companies have lower debt than Sona Comstar, they are not present in the EV space for larger vehicles (PVs and CVs), giving Sona Comstar room to grow.

With the domestic automobile market in disarray because of the second Covid-19 wave, an export and EV-focused automobile maker might be a unique play for investors to consider.