The phrase may you live in interesting times can easily be a curse. That's where we are in the global economy - every day there is fresh drama. We check the daily news with some nervousness: what has Putin done now? Is there a new Covid variant? Are the inflation numbers out?

In these interesting times, where does India stand?

India keeps its head up in a tough global environment

The United States' dominance in the global economy meant that everytime it caught a cold, the world sneezed. The US has gone into an economic recession three times since the start of the 21st century. How did Asia fare during these situations?

Each of these times, Asian countries underperformed the US economy in real GDP growth rate by a percent or more. For instance, when real GDP for the US fell 3% YoY between Q1 2008 and Q1 2009, Asian GDP (excluding Japan) proved to be more vulnerable, and fell by close to 6%.

Cut to 2022, the US saw its real GDP shrink by 1.6% YoY in Q1 2022. It may shrink further in Q2 this year, according to Atlanta Federation’s economy tracker. In simple terms, an economic recession is defined to occur when there is a fall in national output for two back-to-back quarters. 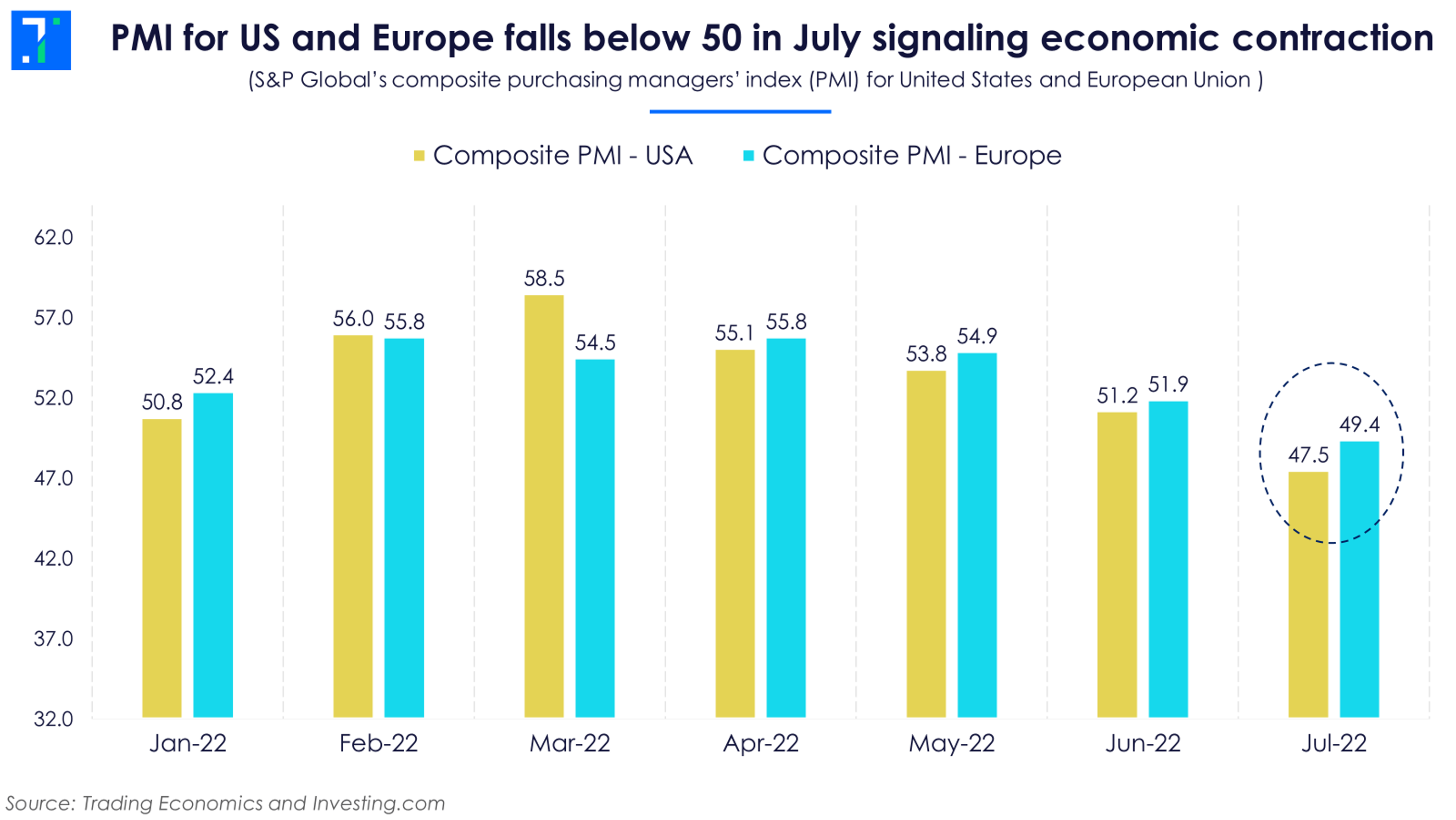 The situation in the European Union is not encouraging either. Its Purchasing Managers index (PMI) fell below the psychological mark of 50 in July 2022. This indicates contraction in economic activity last seen only in the pandemic months, and in June 2013.

The key question here is whether emerging economies, particularly the Asian behemoths India and China, will behave differently should a recession in the US happen now.

Decoupling?: India’s inflation levels ease, as situation worsens in US and Europe

The consumer price inflation (CPI) levels in the US climbed to 40-year highs in June 2022 led by a spike in energy prices. Meanwhile, the European Union (EU)’s inflation rate has been rising sharply over the past one year.

The European economy is heavily reliant on Russian natural gas for its energy needs. But gas flows from Russia to the EU are being reduced, with the Russians giving increasingly hard to believe, dog-ate-my-homework reasons for not restoring gas supplies, like 'maintenance' and 'engine failure'.

As a result fuel and electricity prices are soaring in EU. This is pushing inflation levels up and setting the stage for a difficult winter, with looming fuel shortages for heating. German winters have temperatures that regularly fall below zero degrees. 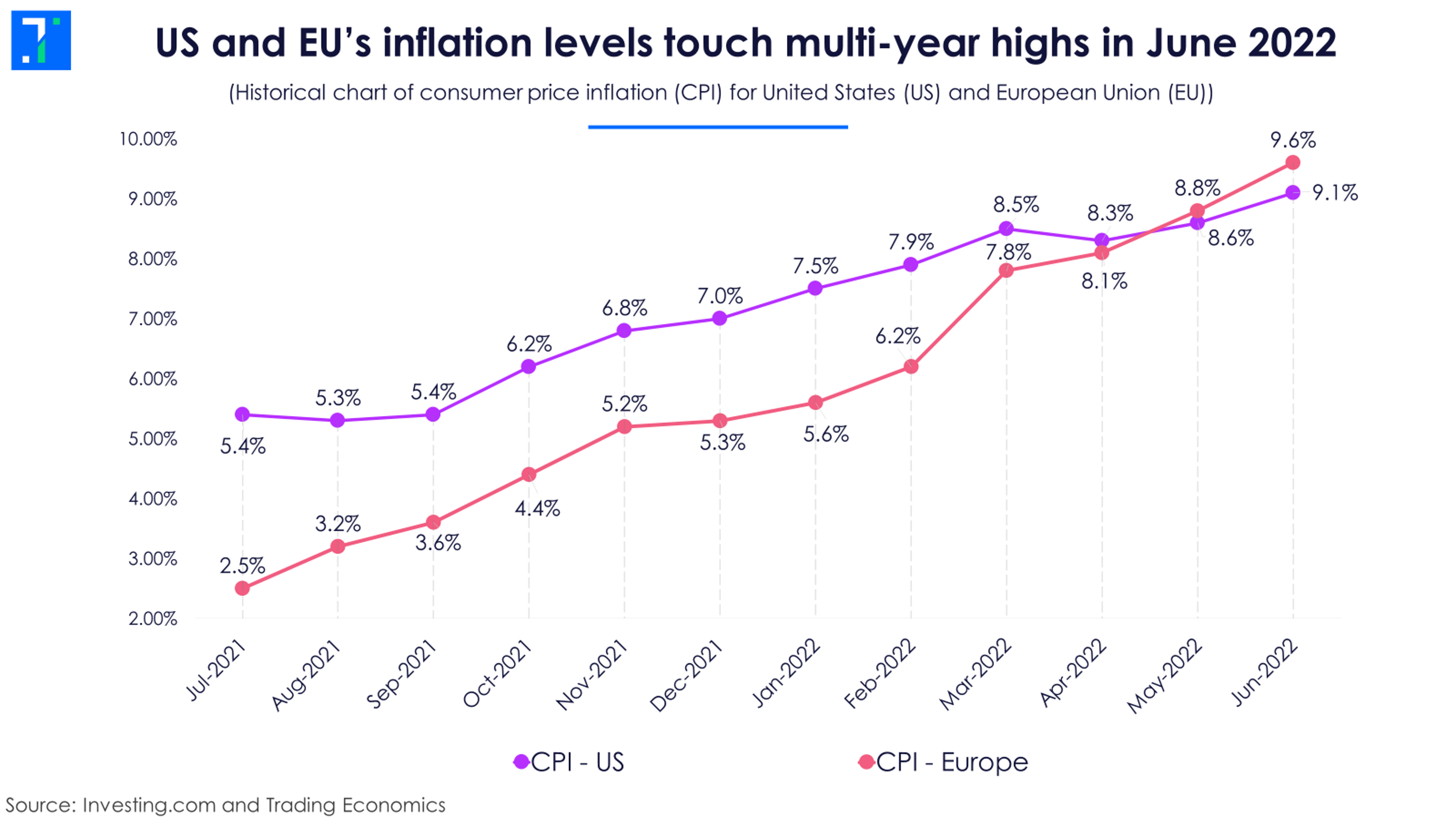 On the other hand India's inflation levels remain lower than that of US and Europe. CPI for India fell from peak levels seen in April 2022. This was backed by lower fuel prices and the rate hikes by RBI. 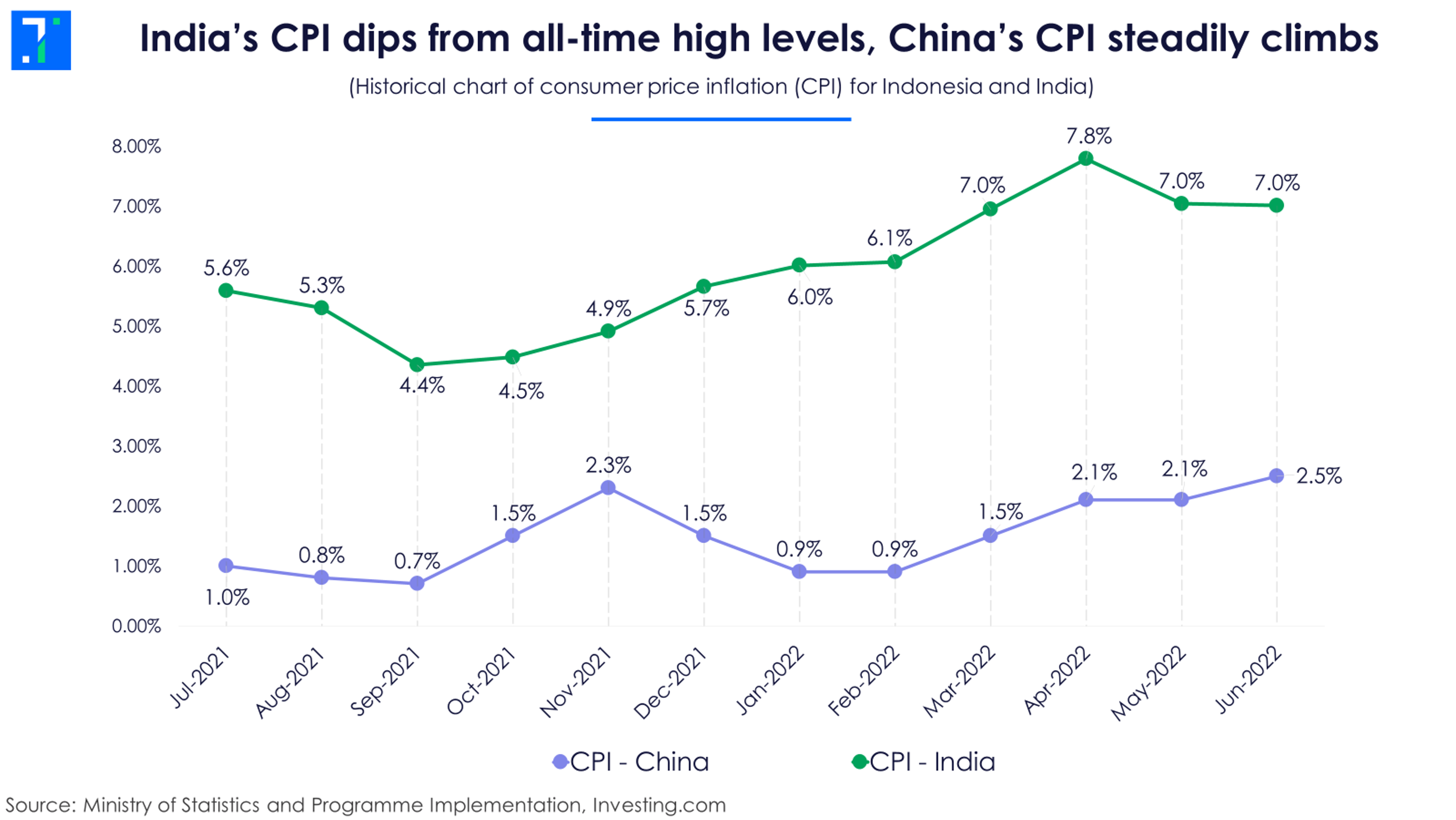 If there is one country that has significantly beaten the global inflationary trend, it is China. Although its inflation levels touched a 2-year high in June, they are very low compared to others. Reports suggest that lower consumer demand, Covid lockdowns, and the export-oriented nature of the Chinese economy are key reasons.

Indonesia’s inflation levels have also remained lower at 4.4% in June, owing to robust commodity exports as inflation this time is largely due to supply-side constraints. It's been one of the best performing markets in 2022 so far. 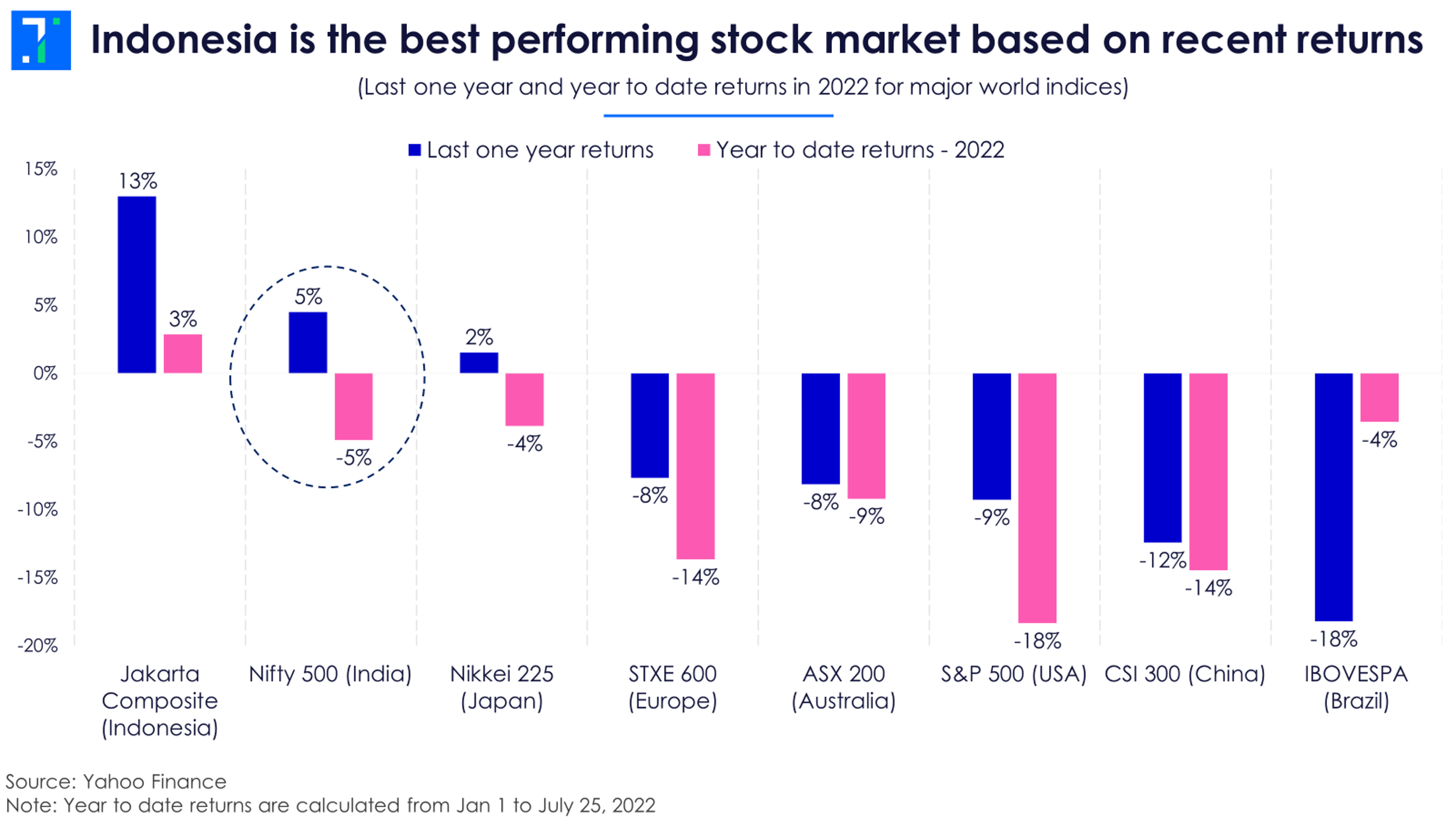 Economic recovery uneven for India, as growth slows down in China

India’s composite PMI level has been on a sustained uptrend since the past six months and remained at healthy levels in June 2022. This growth is led by the expansion in services activity which touched a 11-year high last month.

However, the rate of expansion in manufacturing activity dropped between February and June.

More evidence of a slowdown in manufacturing activity comes in the Index of Industrial Production (IIP), a measure of India’s industrial output. Manufacturing output in May 2022 fell 1% compared to the pre-Covid era. Within the manufacturing sector, it is base metals and chemicals which saw some real recovery, while pharma, electronics and textiles lagged May-19 levels. 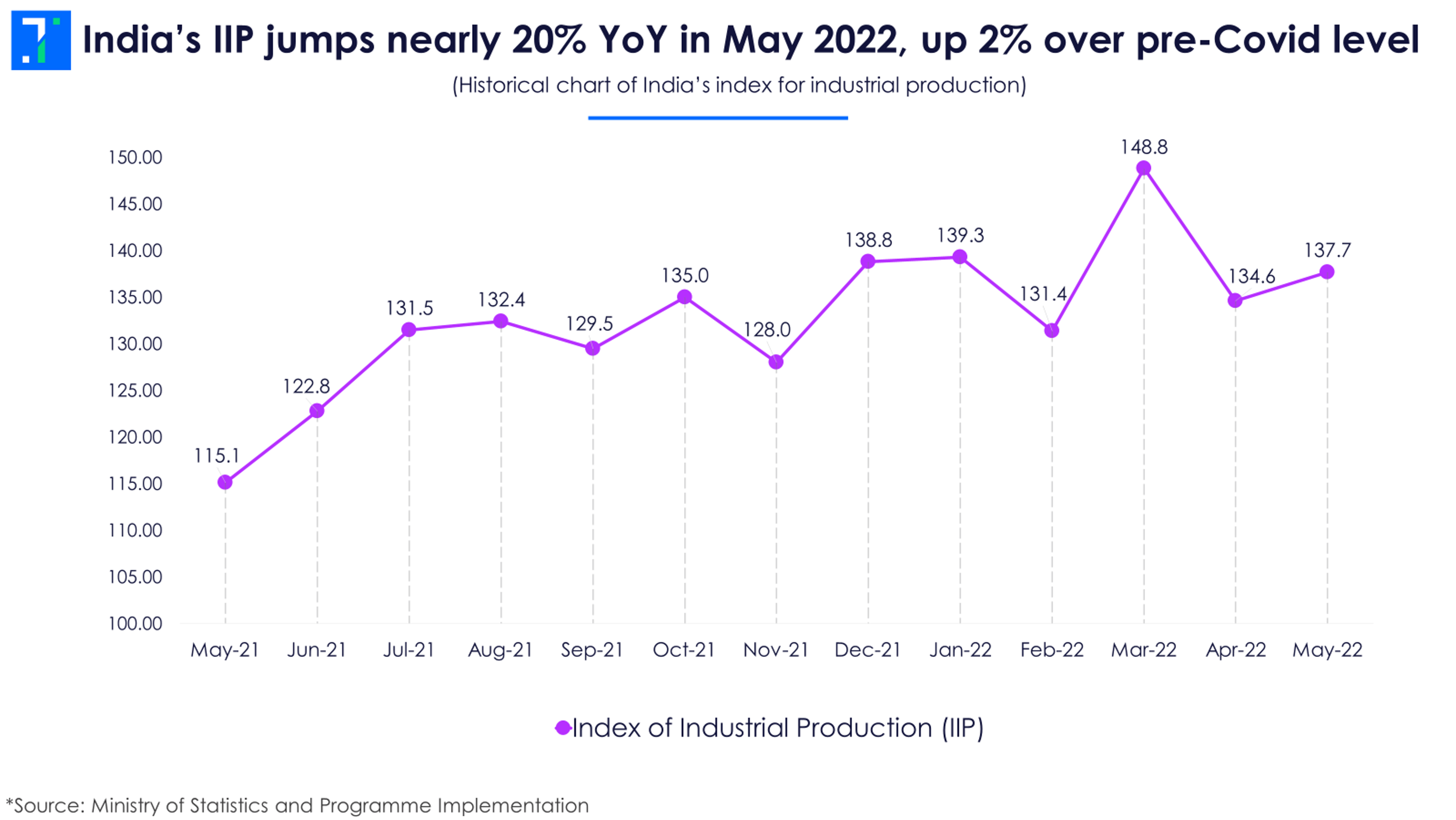 Now we come to China, the biggest emerging economy in the world by GDP, which stood at $17.7 trillion at the end of 2021. A distant second is India, whose GDP is just 19% of China’s national output. Hence, a growth slowdown in the poster boy of emerging nations changes the equation altogether. 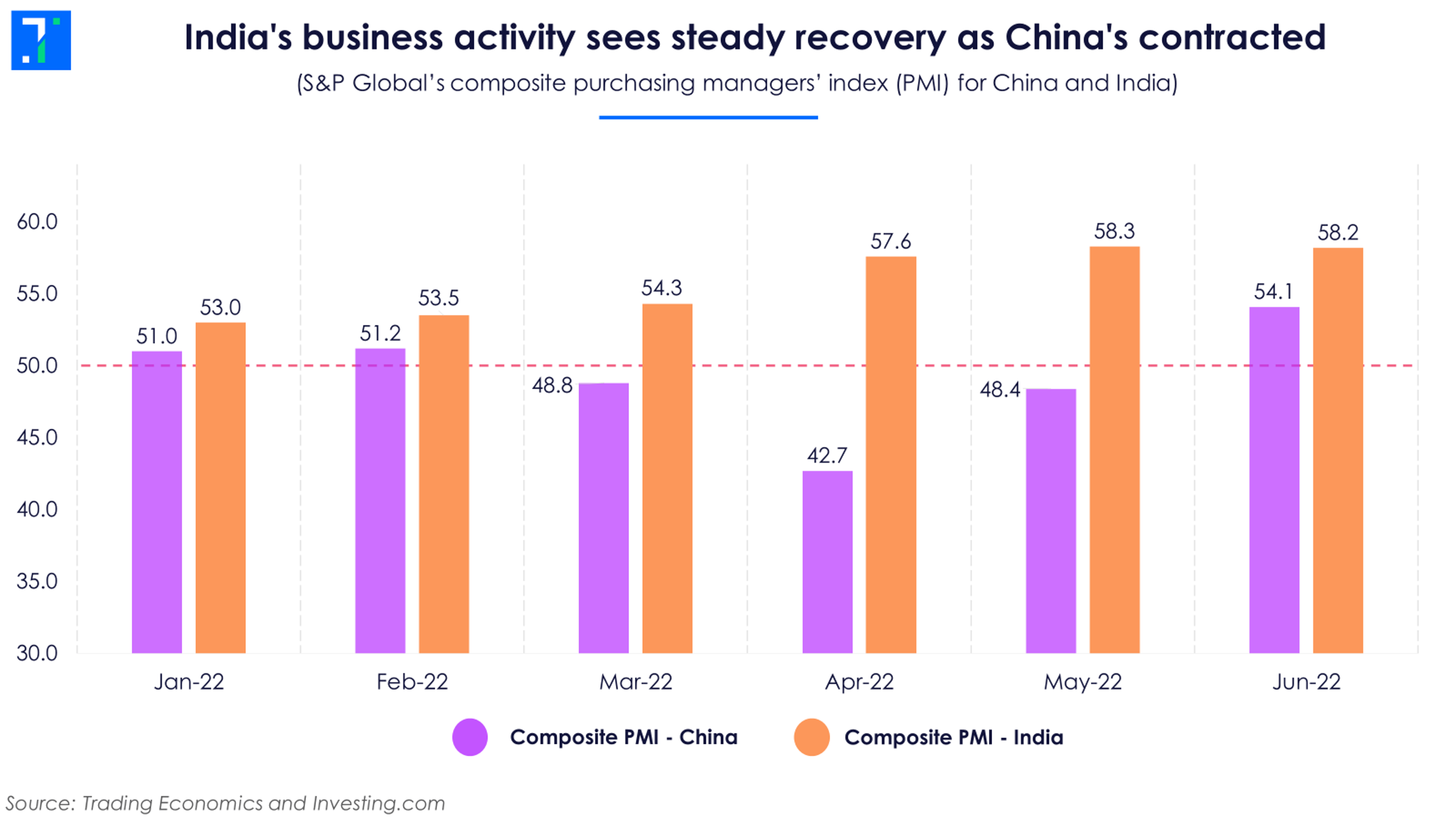 If we go by the PMI figures, the Chinese economy saw a consistent contraction between March and May due to strict Covid related lockdowns in key economic centres like Shanghai. Moreover, the ‘official’ real GDP growth for the country was nearly zero for Q2 2022.

Other systemic risks are also emerging for the Chinese economy. There is a wave of homeowners refusing to pay their mortgage instalments due to stalled construction work. According to China’s major banks, there are about $311 million worth of loans at risk from this.

India set to register fastest economic growth in 2022 and 2023

According to a recent IMF release, the world economic outlook has become gloomier and more uncertain in FY23. This is backed by higher-than expected inflation and disrupted supply chains, leading to reduced consumer demand across major nations.

Further, the dragon is losing its fire. China’s GDP growth rate is set to fall to just 4% in 2022. And this could have spill-over effects on other emerging nations. This is a country whose GDP growth rate averaged 9.5% between 1978 and 2018. 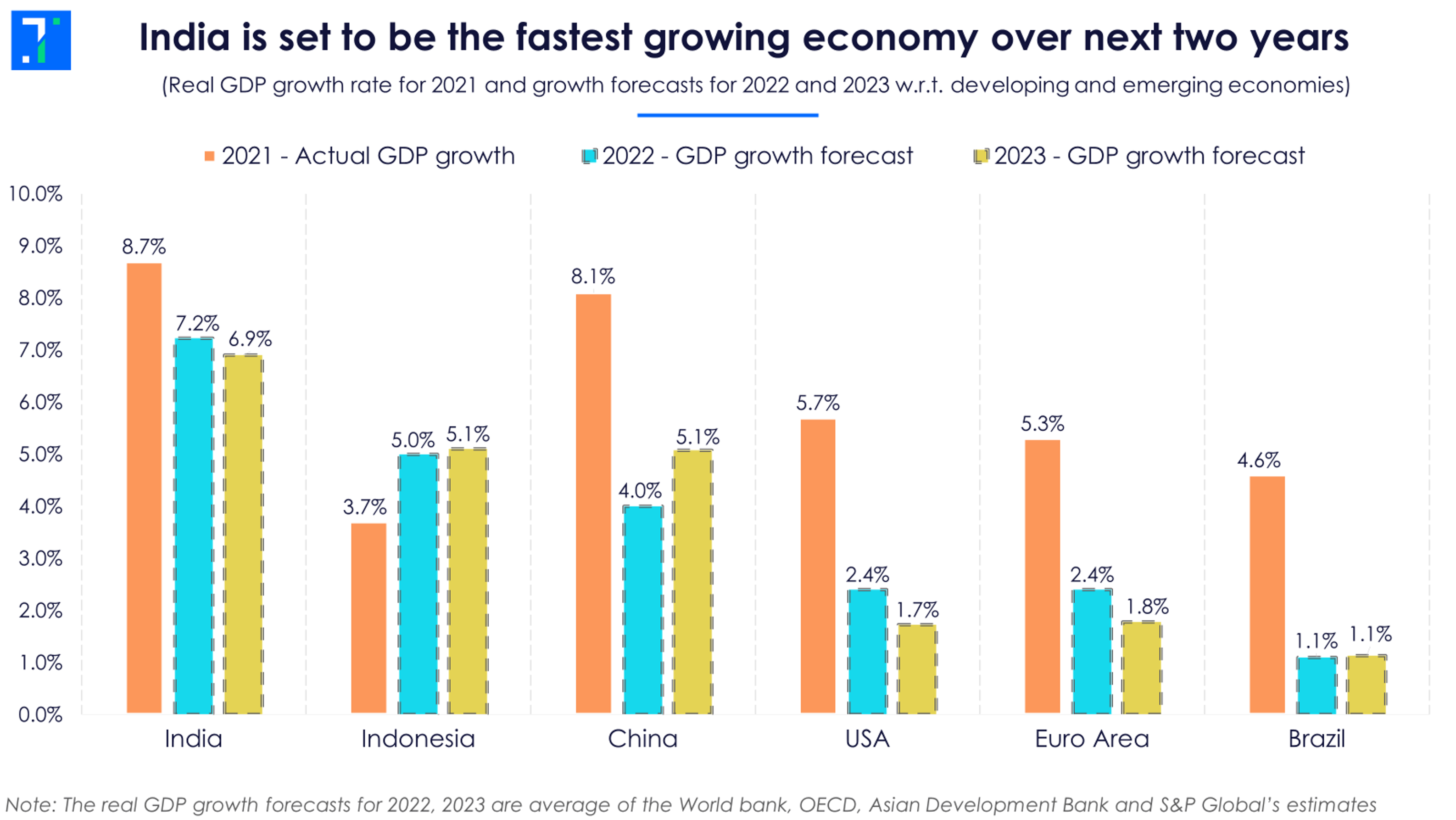 India is a bright spot here, and set to be the fastest growing economy in the world over the next two years. However, the US Fed announced a federal funds rate hike of 75 bps this week, and there are more hikes likely from the US Central Bank.

This may lead to fresh capital flight in the short term from emerging nations like India, possibly causing their currencies to weaken further. A weaker rupee is a key challenge for India as it is a net importer of crude oil and commodities.

The next few months are crucial for India. If it comes through the current global turmoil unscathed, this decade could be the one when this South Asian giant fulfills its long awaited economic promise. 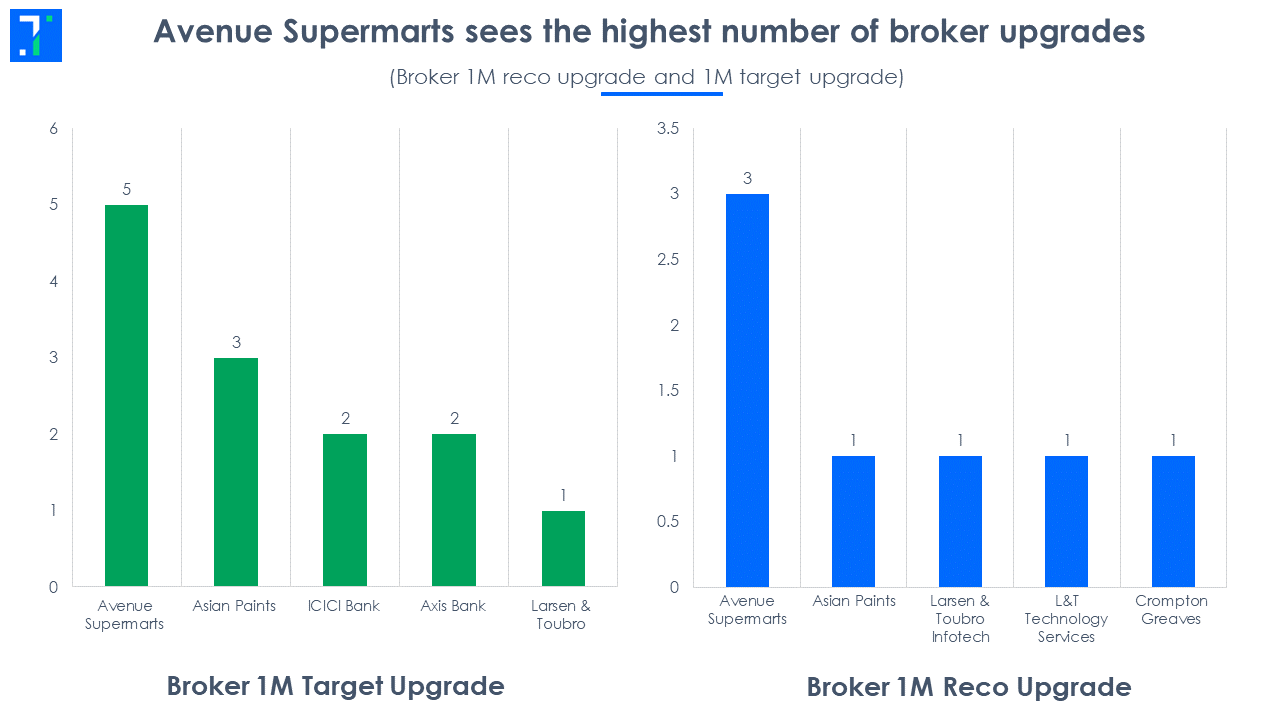 As Q1 results come in, analysts have been picking out their potential winners. This screener reflects 20 companies, all within the Nifty 500 group, for which the brokers have either upgraded the recommendation or the target price in the past one month. Avenue Supermarts stands out in this list as the company received the highest number of broker recommendation upgrades.

This retail major saw its revenues nearly double YoY in Q1FY23 backed by rising customer footfalls, high store additions and a low base effect. This is also indicative of improving consumer sentiments at the retail level.

Mid-tier IT companies like L&T Infotech and L&T Technology Services also turn up in this list. These companies managed to beat their larger peers in terms of sequential revenue growth in Q1FY23. However, they are cautious on the outlook for H2FY23 considering the slowdown in developed world, and they saw a sharp jump in valuations during the recent bull run.