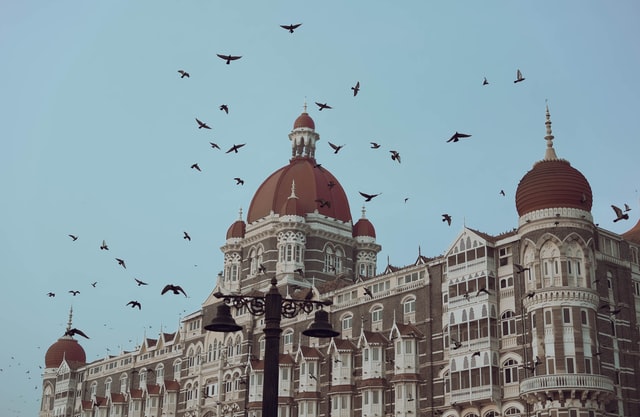 Indian Hotels is on the road to recovery in FY23

Indian Hotels Co is a familiar, established business - it is part of the Tata Group and operates hotels in various segments, like the Taj luxury hotels, Vivanta upscale hotels, and budget hotels under the Ginger brand. The hospitality industry was one of the worst-hit due to the pandemic. As we move (hopefully) towards a post-Covid-19 world, the Indian hospitality …

Indian Hotels Co is a familiar, established business - it is part of the Tata Group and operates hotels in various segments, like the Taj luxury hotels, Vivanta upscale hotels, and budget hotels under the Ginger brand. The hospitality industry was one of the worst-hit due to the pandemic. As we move (hopefully) towards a post-Covid-19 world, the Indian hospitality industry has undergone a transformation from its huge losses in FY21 and FY22. With some companies posting profits in Q3FY22 and Q4FY22 of FY22, a recovery in FY23 is highly possible. Leading the recovery is the largest hotel chain, Indian Hotels. This stock has surprised investors with a 213.5% return since the beginning of the pandemic.

In its FY22 Annual Report, Indian Hotels outlined its AHVAAN 2025 strategy which essentially focuses on four key aspects. The first is to reach a total of 300+ hotels across its portfolio by FY25. The second objective is to have a consolidated EBITDA margin of 33% by FY26, with 35% EBITDA share from management contracts and new businesses. The third is to achieve an equal ratio between owned/leased and management contract properties by adopting an asset-light model, and the last but important one is pursuing its growth plans backed by sufficient funds generated from operations.

The AHVAAN strategy is an extension of the company's earlier Aspiration 2022 strategy which focused on asset-light expansion and improvement in margins. While these plans would play out over the next three years, let us look at how the company is positioned to execute these plans without hurting its cash flows.

Last two-quarters of FY22 show signs of recovery for hotels

The hotels industry was among the worst-hit over the last two years due to the pandemic, and FY21 saw most companies report losses. Things started improving with every passing quarter in FY22, and Indian Hotels’ FY22 revenues rose 84% YoY to  Rs 3,211.4 crore, albeit on a low base. 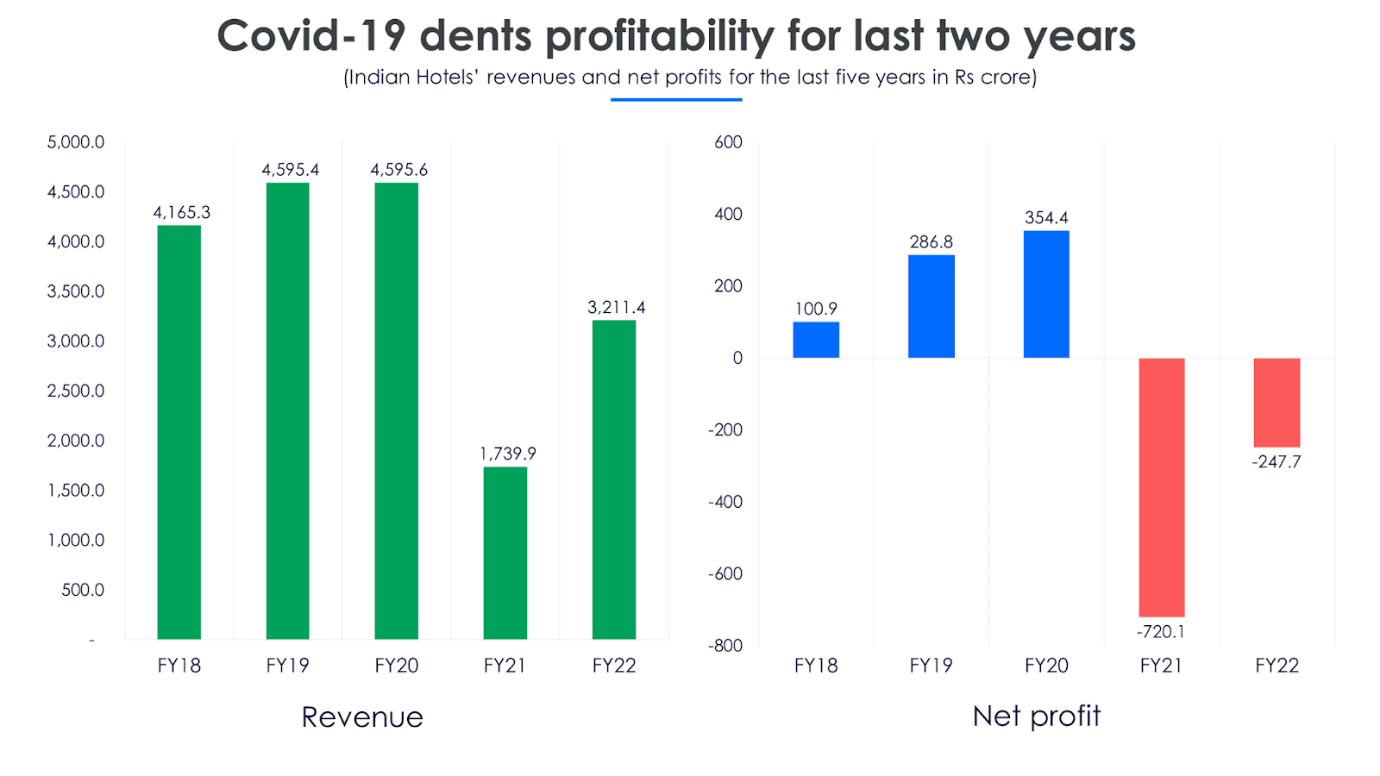 In FY21, the revenues dropped to one-third of Indian Hotels' FY20 revenues. This led the company to post a loss of Rs 720.1 crore in FY21. It managed to bounce back in FY22, with rising revenues helping it reduce its losses. While revenues in FY22 are still far below pre-Covid levels, the initiatives taken over the last few years are expected to play out through FY23., This could help the company’s FY23 revenues cross the pre-Covid levels.

Its international properties across USA, the UK, Dubai, and Africa saw revenues rise consecutively for the three months of Q4FY22. Sri Lanka also registered higher sales in March, but going forward this would be an area of concern due to the ongoing economic crisis in the island nation. However, it would not have a  large impact on the total revenues of Indian Hotels’ international properties in FY23.

The company posted profits only in two out of the last six quarters–Q3FY22 and Q4FY22. This was helped by a surge in travel across India and the world. 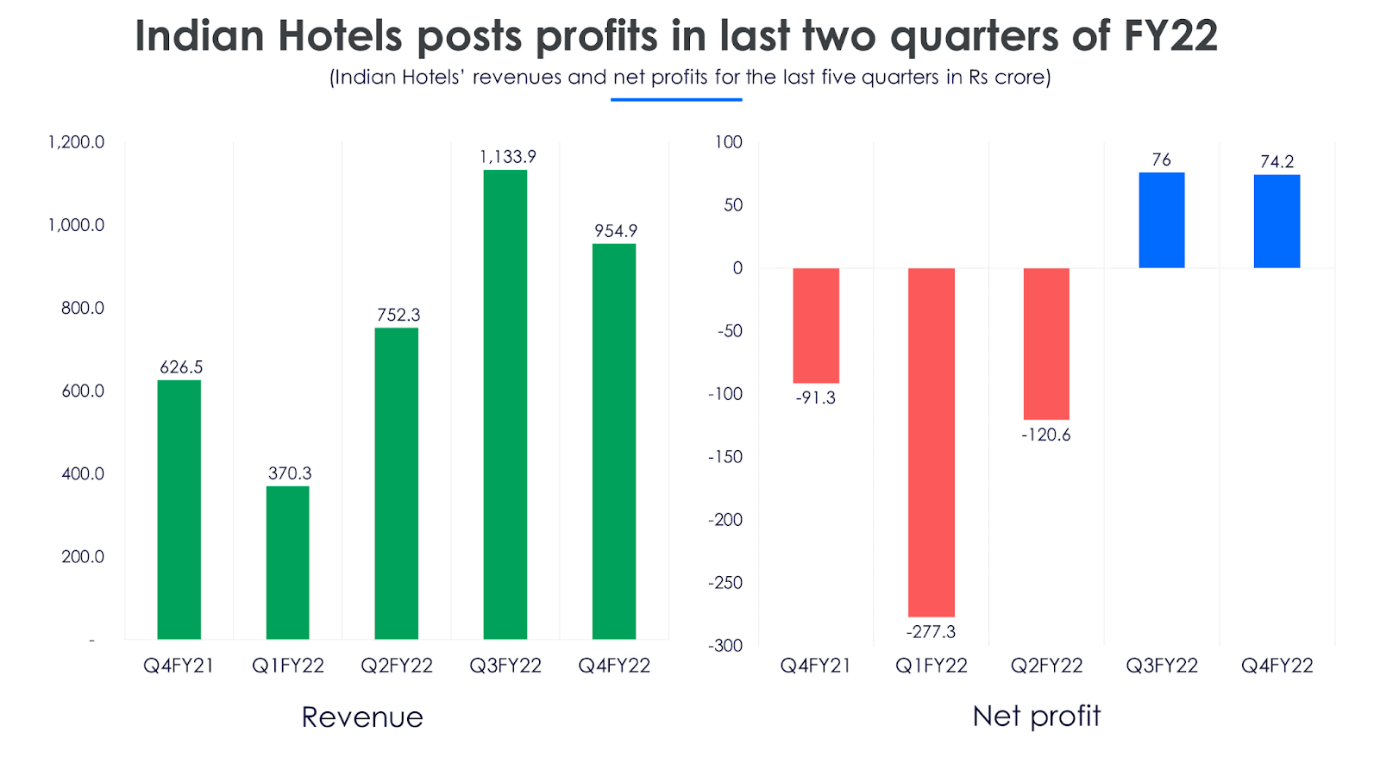 It was understandable that these losses would be incurred due to the pandemic, with lockdowns and restricted movements. However, Q4FY22 stands out as this period was affected by the spread of the Omicron variant in January 2022. Still, recovery in revenues in February and March helped Indian Hotels close Q4FY22 with a net profit of Rs 74.2 crore. 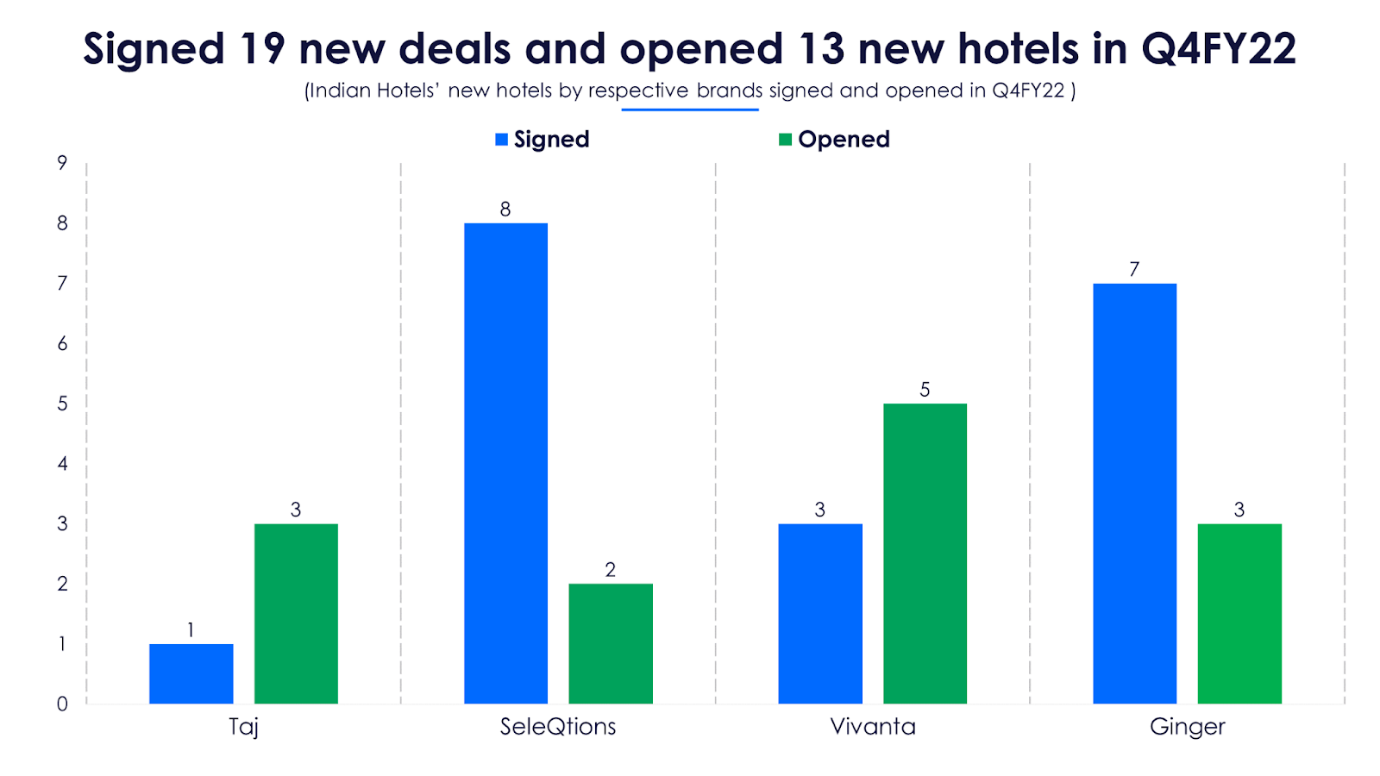 During the last two years, many new initiatives have helped the company to expand into different segments and areas of operation, which have meaningfully added to revenues.

They launched Qmin services in the food and beverage category, which delivered food to customers’ homes from select restaurants in their metro-based properties. While this service was offered in 20 cities, it generated revenues to the tune of Rs 66 crore for the company in FY22. The company plans to extend this to more than 25 cities in the coming quarters.

Indian Hotels has made financial decisions that would bode well in the long run. It closed a rights issue of Rs 2,000 crore in December 2021, and closed a QIP of another Rs 2,000 crore in March 2022. The company has also reduced its debt from Rs 3,571 crore in September 2021 to a cash surplus of Rs 106 crore in March 2022. With this debt reduction, the company’s expansion plans should not be a drag on the balance sheet.

Expansion plans in the pipeline include a total of 100 new hotels, with 40% being developed under the Ginger brand, and 32% under the Taj brand - the company is prioritizing both its budget and luxury properties. The company also chose to shift to an asset-light model, whereby Indian Hotels would only operate properties under a management contract. Around 74% of the new projects fall under this model, while the remaining 26% would be owned and operated by the company. 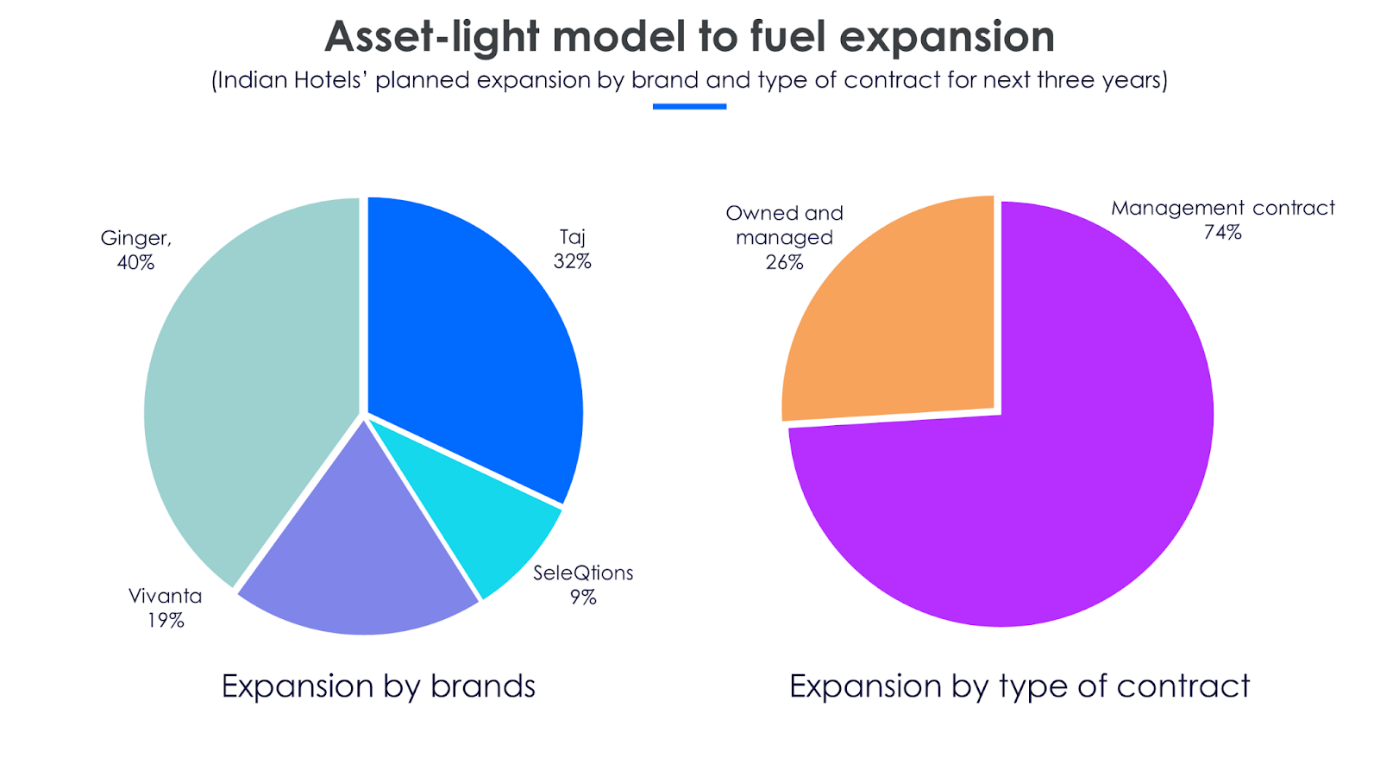 Hotel stocks are showing signs of recovery across the board

Following the outbreak of the pandemic, all hotel stocks hit their lowest point in the last few years in March 2020. Thereon, it's been an uphill climb for many hotel companies’ stocks that have delivered more than 100% returns from April 2020 to June 2022. This is also an investing lesson that betting on beaten-down sectors during bad times will be rewarded well when the tide turns. With virtually no visibility of earnings during the initial stages of the pandemic, hotel stocks seem to be on a road to recovery in FY23. 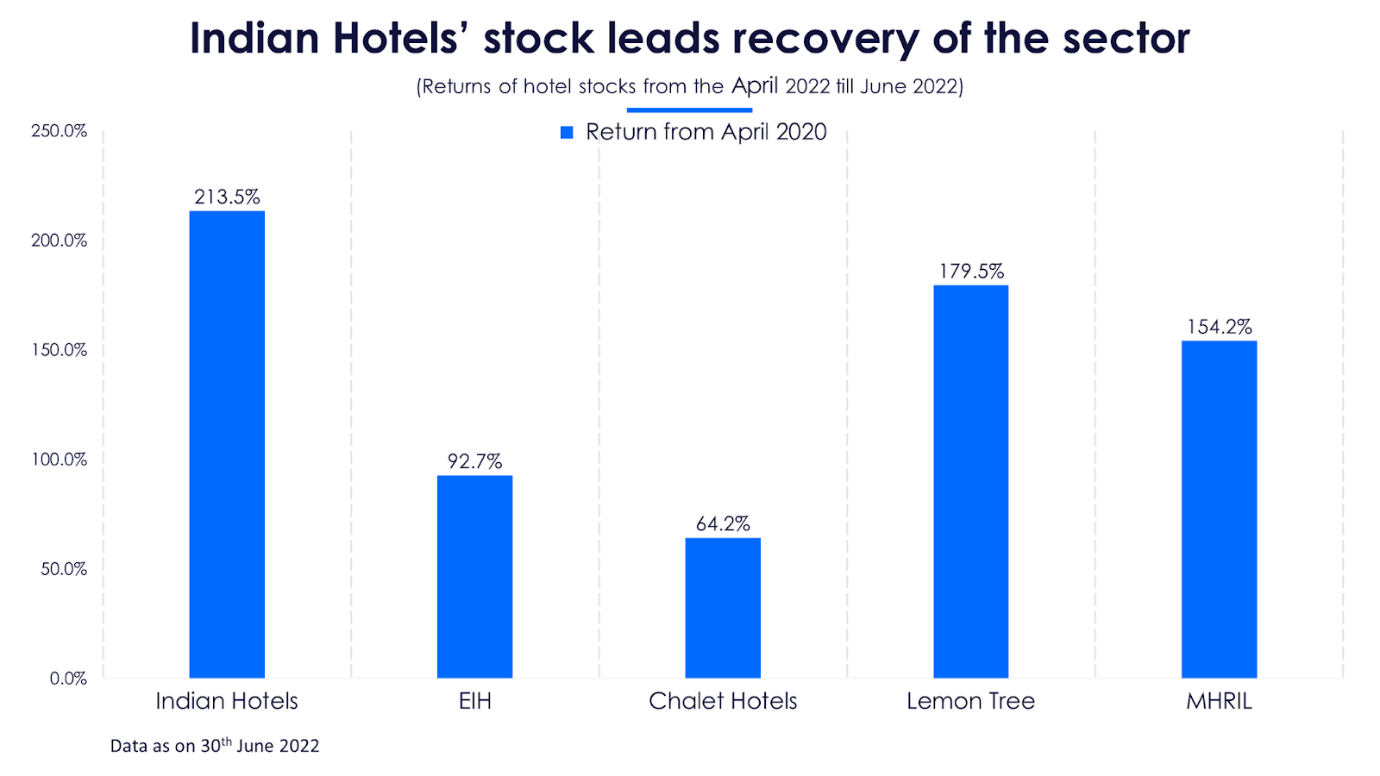 Indian Hotels has maintained its leadership with net profits of Rs 74.2 crore in Q4FY22, followed by MHRIL (Mahindra Holidays and Resorts) with Rs 16.2 crore and EIH with Rs 14.8 crore. Looking at recovery across the sector, MHRIL was profitable in Q2, Q3, and Q4 of FY22, and EIH in Q3FY22 and Q4FY22. But Lemon Tree and Chalet Hotels continued to make losses in Q4FY22, with not a single profitable quarter in both FY21 and FY22 though the quantum of losses has reduced.

Indian Hotels' has ambitious targets in place, but what can possibly be a cause for concern is the expansion of the Ginger brand, which accounts for 40% of the new hotels. This brand generates the lowest margins and has the maximum properties lined up for expansion. What adds to the concern is that 92% of the Ginger properties would be either leased or owned by Indian Hotels. Essentially the asset-light model that the company is proposing would work only in high-end brands like Taj and Vivanta, while there will still be a lot of capital expenditure on the Ginger brand. This remains a grey area that may not find alignment with the AVHAAN plan.

With a gradual return to profitability over Q3FY22 and Q4FY22, expansion plans are underway and with the addition of newer business lines like the Qmin and Ama properties. In FY23,, the company could post higher revenues than pre-Covid levels. Indian Hotels continue to maintain leadership among peers, and the stock has delivered stellar returns over the last two years in a challenging environment. With the economy opening up completely in FY23, it is expected to carry on delivering higher revenues in FY23. With these prospects, the stock could see a further run-up from current levels in the coming quarters