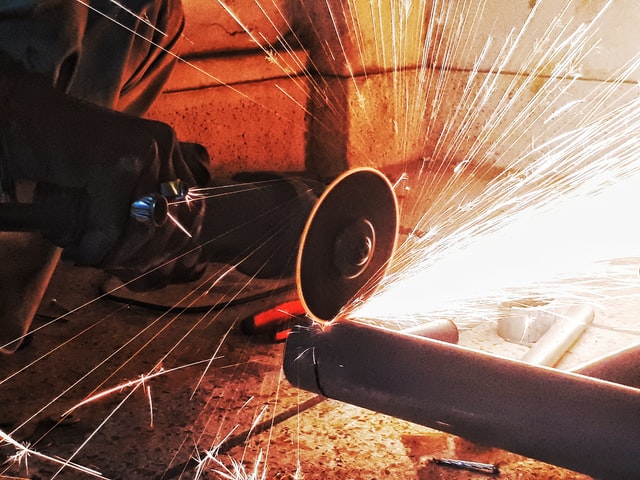 JSW Steel: Are we nearing the end of the great metals ‘supercycle’?

Indian steel companies managed to nearly triple their EBITDA between Q2FY21 and Q2FY22 by riding the wave of higher steel prices caused by supply side bottlenecks after the pandemic broke out in early 2020. However, demand shifts have finally come to haunt them in Q3FY22. JSW Steel’s Q3FY22 results disappointed investors both on the sales volumes and cost front. It’s almost like the great ‘supercycle’ for steel is petering out. Brokerage Jefferies had alluded to this in their 2022 outlook  on the metals space. Is JSW Steel’s results a sign of what lies in the future for the steel sector?

Many brokerages primarily anchored the case for subdued steel demand in Q3 to the slowdown in the real estate sector in China and the upcoming winter Olympics. This was due to the fact that China accounts for nearly 50%-60% of global commodity  consumption. However, many failed to notice the dismal demand conditions back home in India. While JSW Steel’s Q3FY22 export volumes nosedived 45% sequentially to 0.81 million tonnes (MT), all three domestic segments (based on user application) also reported a YoY fall in sales volumes. The consolidated sales volumes excluding Bhushan Power were 3.91 MT in Q3FY22, up 2% QoQ and down 1% YoY. 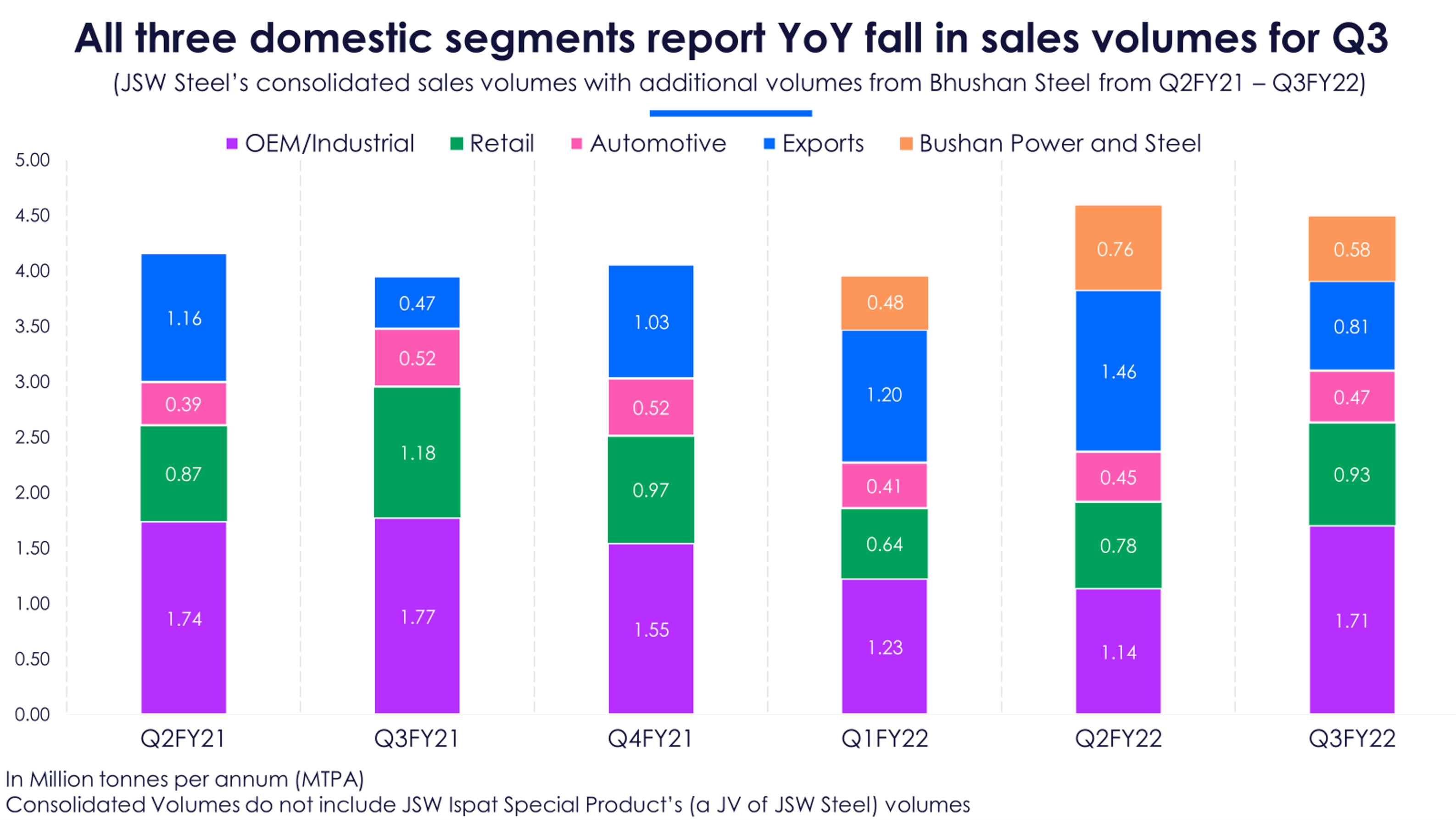 Notably, the automotive and retail segments witnessed double-digit YoY fall in volumes in Q3. While auto demand did recover sequentially backed by the festive season, it is still not near  the levels seen in Q3FY21. Many auto companies such as Maruti Suzuki cut production materially in Q2FY22 and Q3FY22 led by the global semiconductor shortage . This impacted the demand for base metals such as iron and steel.

The fall in sales volumes for the OEM/industrial segment is less severe given the robust demand for products like solar modules and electric appliances. According to the management, the demand from the infrastructure segment wasn’t at the expected levels given the extended southwest monsoons in 2021. Interestingly, this is the common commentary from companies in the  cements and PVC pipes space. Another key driver here is the considerable fall in government capex for the months of October and November 2021.

Notably, the newly added subsidiary Bhushan Power and Steel reported an over 20% decline in its sales volume to 0.58 MT sequentially.

If demand falls, can prices be far behind?

In Q3, steel prices corrected globally with Indian domestic HRC prices falling by 11% from their peak in mid-November 2021. Understandably, the standalone net realizations of JSW Steel took a hit of nearly 2% QoQ in Q3FY22. With the softening of realisations and a rise of nearly 30% in the coking coal prices, JSW’s standalone EBITDA/tonne fell by over 25% QoQ. At the consolidated level, the absolute EBITDA fell by close to 18% YoY to Rs 9,286 crore. 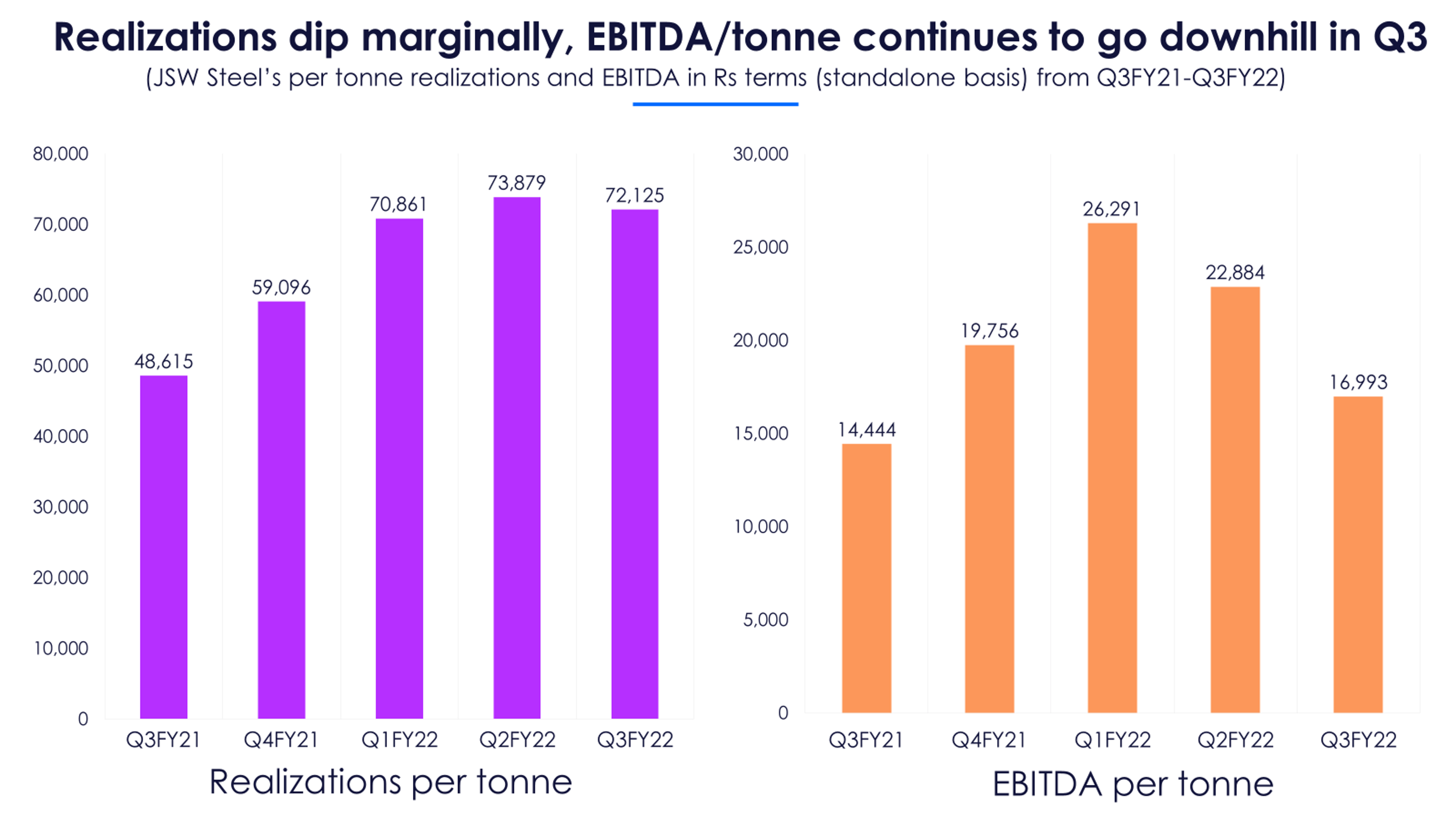 JSW Steel’s EBITDA also suffered due to a provision of Rs 1,056 crore to cover the upward revision of iron ore prices done by the Indian Bureau of Mines (IBM). A litigation is ongoing in the Orissa High Court for these revisions. The company believes that IBM did not use the correct methodology prescribed by the Mineral Conservation Rules, 2017 to calculate the average selling price of iron ore (key input for a steel company). 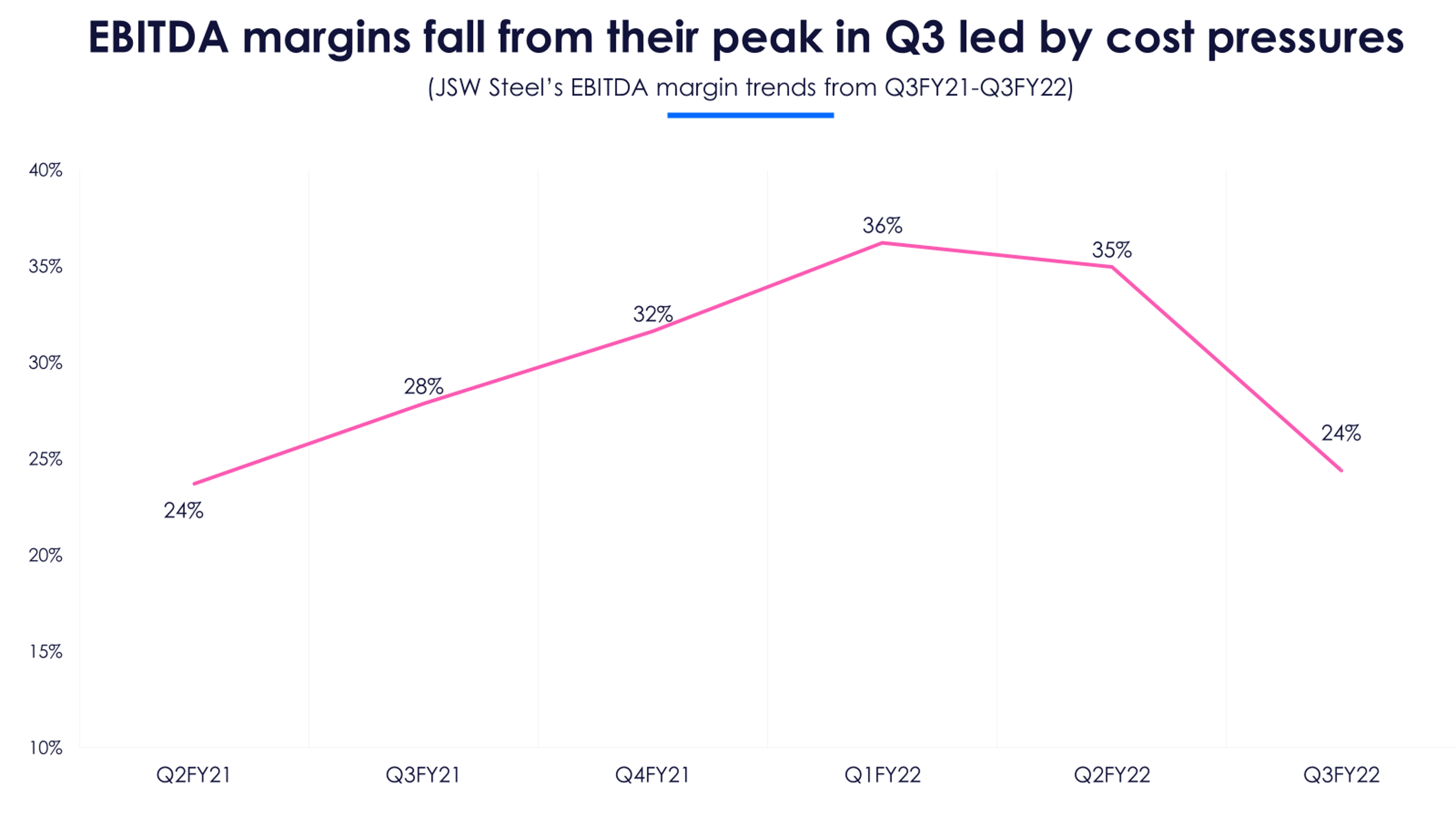 As anticipated by Jefferies, the EBITDA margins of the company fell from its peak levels of 35-36% to 24% in Q3FY22, a contraction of nearly 11 percentage points on a QoQ basis.

The coated products division, a value-added product for JSW Steel, posted an EBITDA of Rs 570 crore, down 45% QoQ. This decline came at the back of input cost pressures as well as a 7% QoQ fall in its revenues at Rs 7,781 crore. Strong overseas demand for coated products in Q1FY22 and Q2FY22 led to the subsidiary’s EBITDA doubling in Q2. 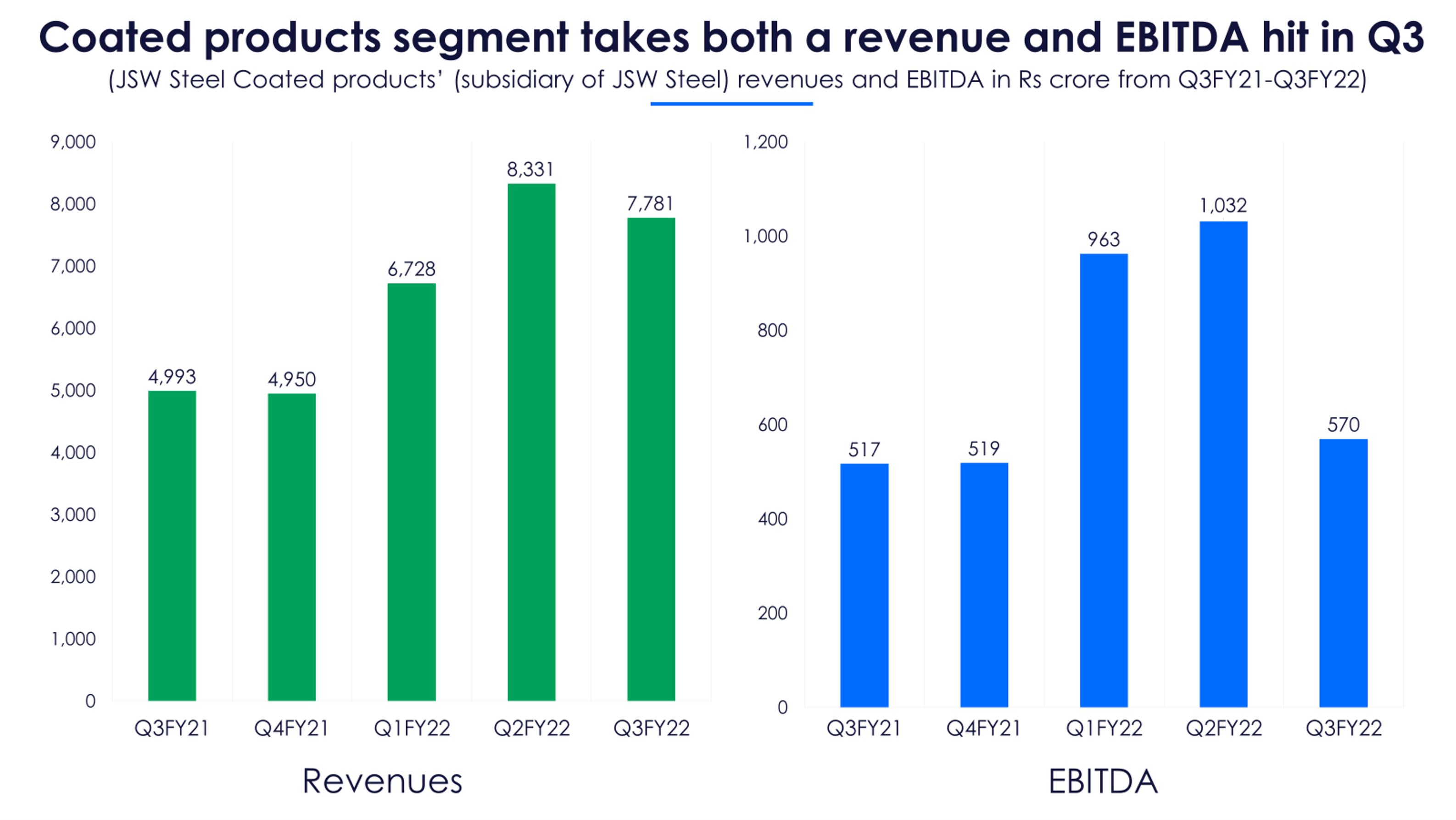 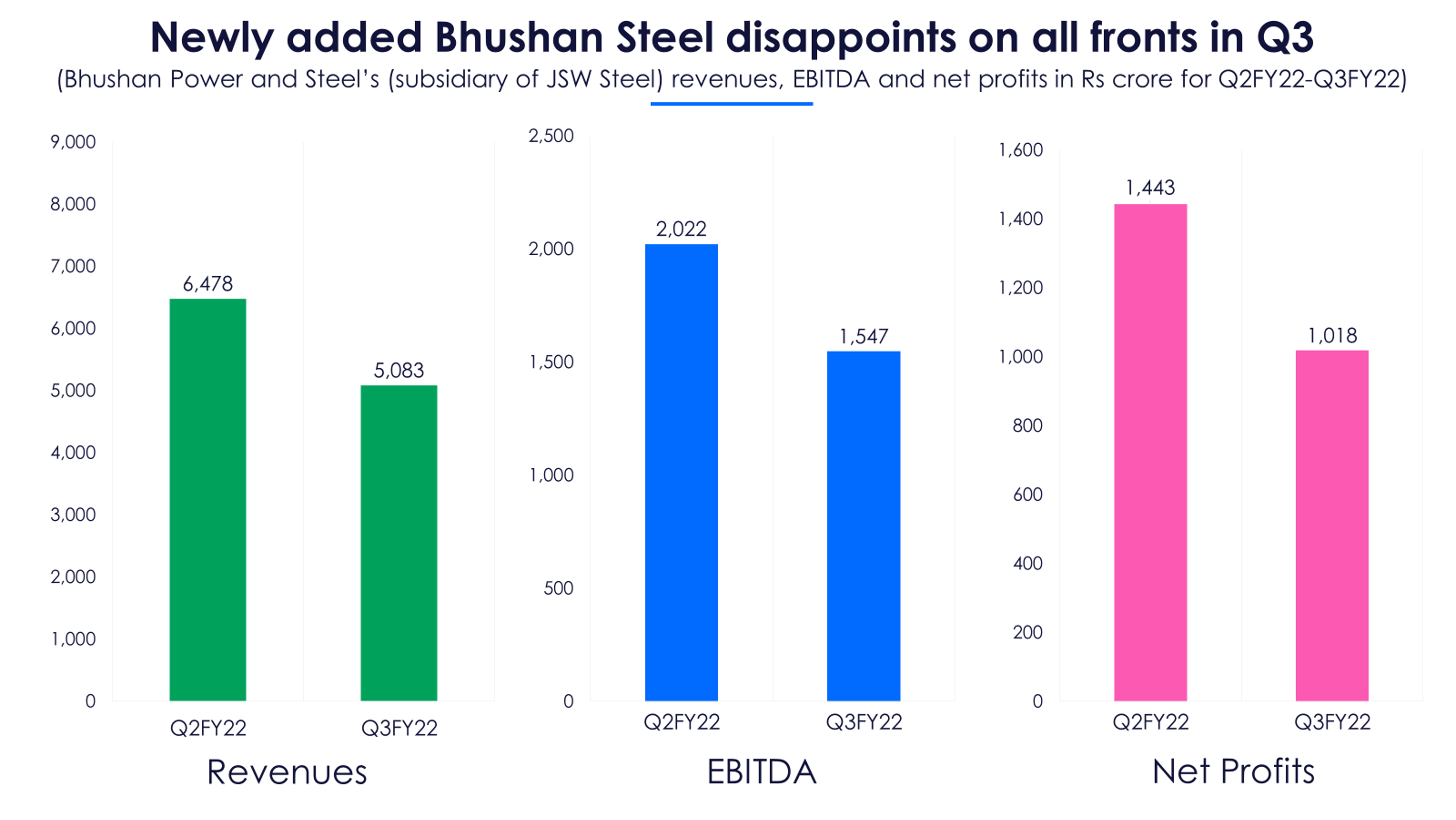 While rating agency CARE gave a positive growth outlook for the US market in CY2021 and CY2022, the Q3 performance of JSW Steel’s foreign subsidiaries tells a different tale.  Although the foreign units posted a rise in revenues, their EBITDA fell sequentially, with the exception of US Plate & Paper Mill (flat QoQ). The Italian unit posted a loss for the fourth time in the last five quarters. This time it was due to a one-time impairment charge as well as poor demand from the railroad companies. The special products JV is yet to report profits at the levels achieved between Q3FY21-Q1FY22. 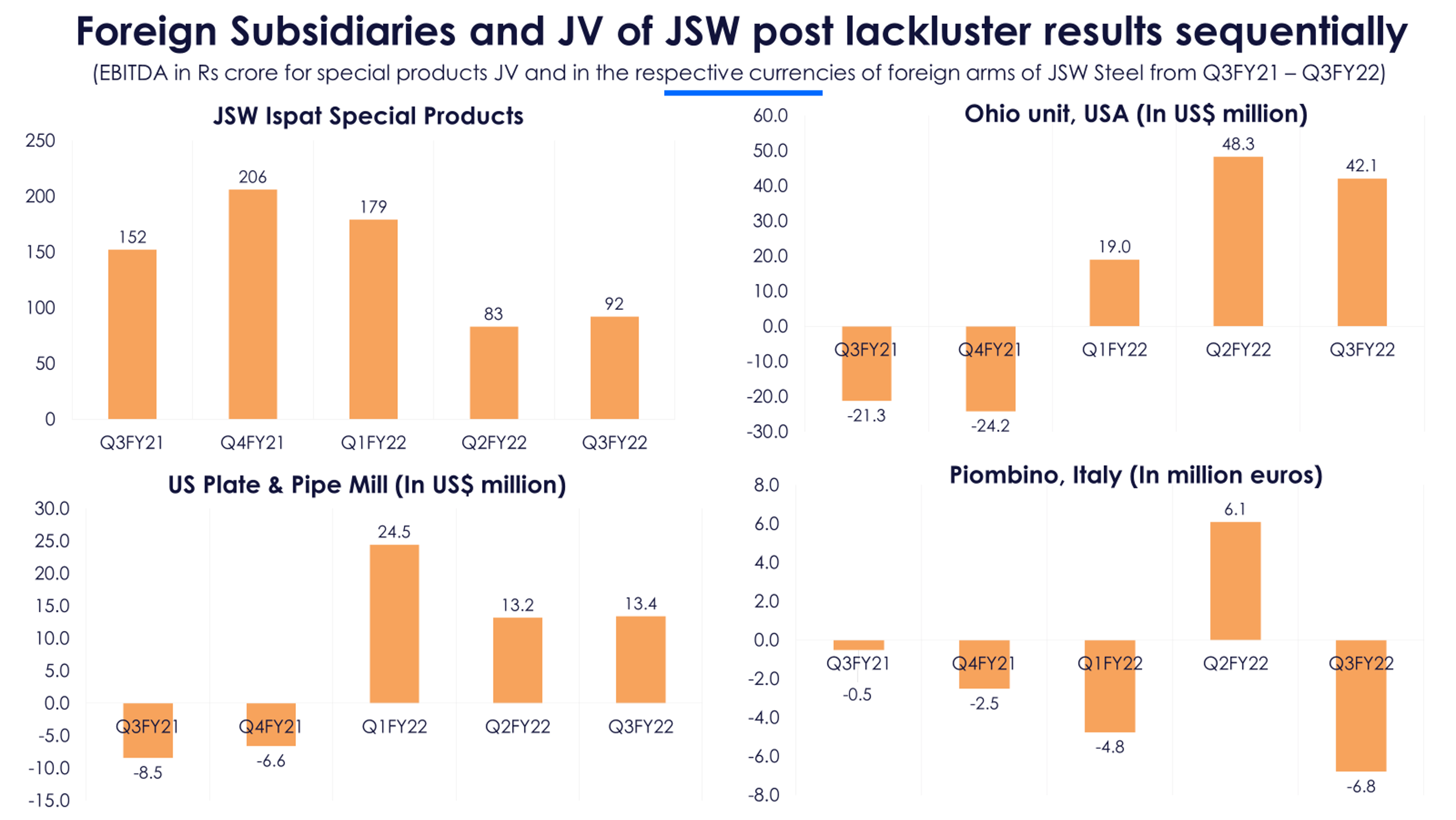 On the whole, JSW Steel’s net profits plunged 39% QoQ to Rs 4,357 crore led by a spike in coking coal costs, flat volumes, dip in realisations and poor performance of its subsidiaries. Interestingly, its revenues rose 17% QoQ to Rs 38,071 crore. At a standalone level, the revenues are actually flat on a QoQ basis owing to a marginal rise in volumes and marginal fall in realisations. However, inclusion of 100% sale of Bhushan Power and Steel (as against 49% share in Q2) in the consolidated number as well additional iron ore sales reflect a decent QoQ revenue growth overall. 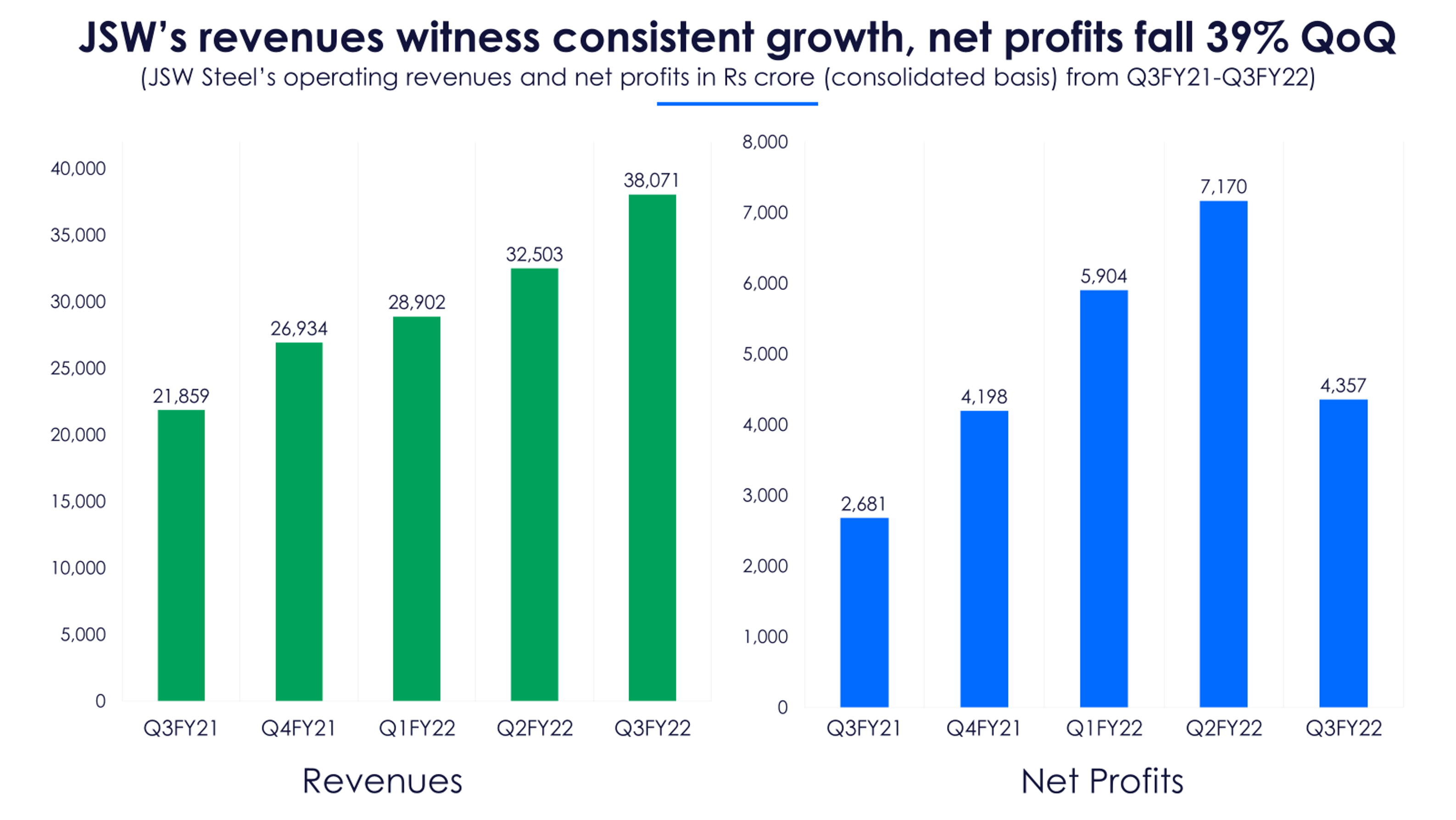 Riding on the hope of infrastructure push in Q4FY22

Owing to the delay in Dolvi expansion, the company’s management cut its sales volumes guidance by 5-6% for FY22. If we back calculate using 16.5 MT as the new target, expected volumes for Q4FY22 will be around 5 MT. This translates to a 23% YoY volume growth which appears to be quite optimistic prima facie. Especially since the growth outlook is quite fuzzy amid the third wave.

The management expects robust demand from the oil and gas, railways, real Estate, road construction and infrastructure sectors for Q4FY22 and beyond. Notably, the majority of these sectors depend on higher government capital spending. According to JSW’s management, 75% of the capital spending in the economy is being done by the government and the rest by the private players. The company also anticipates the steel prices to rise from February/March 2022 which augurs well for its realisations. However, demand will ultimately determine where this metric will end up.

In the midst of this, JSW Steel is aggressively planning a capex plan despite future demand being wobbly. The steel major plans to augment its steel manufacturing capacity by 38% between now and FY25. This involves a capex of nearly Rs 37,000 crore. Also, going by its FY22 target, the company might spend close to Rs 7,900 crore in Q4FY22, compared to Rs 10,350 crore spent in the nine months ended December 31, 2021. 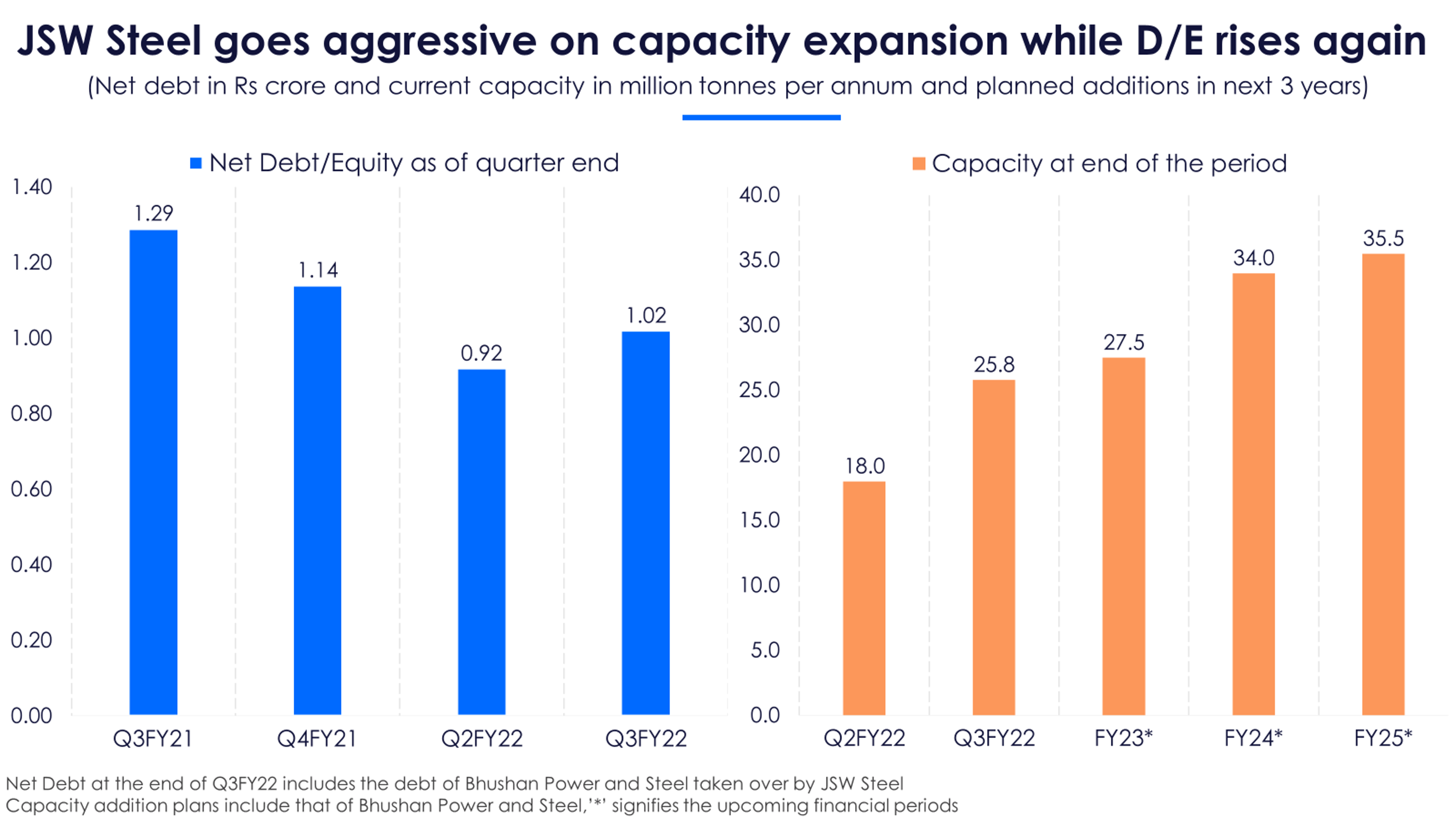 If we talk about the cost side, the company may see a higher impact on its P&L with coking coal price being at an unsustainable level of $445 in December 2021. This is a worry because the company has stock of two months of coking coal. As it makes more purchases, the higher cost of coking coal will bite.

In all, brokerages across the board hold a divergent view on the metals upcycle. JP Morgan believes that domestic steel demand will revive strongly in March 2022 and June 2022 quarters. We have to wait and see if the current drop in profits of JSW Steel is a mere blip or if the earnings cycle in the steel sector is actually inflecting downwards.