As the pandemic subsides and the Indian economy continues to heal, BAF stock price is on an upswing. But it’s the company’s accelerated digital transformation drive that has widely captured investors’ interest. Analysts and investors alike are keenly watching BAF’s 3-in-1 business transformation and how the largest lender for the purchase of consumer durables braces itself to take competition head on from banking giants and fintech players like Amazon, Paytm, and Phone Pe.

It was a strong Q2FY22 for the non-banking finance company (NBFC) as net interest income (NII), net profit, and assets under management (AUM) reported robust double-digit growth. NII came in at Rs 5,335 crore in September 2021 quarter compared to Rs 4,162 crore, a year ago, rising 28% YoY. NII growth was supported by strong growth in advances as economic activity picked up. Interest reversals which came in at Rs 322 crore vs Rs 216 crore in Q2FY21 also aided NII double-digit growth. 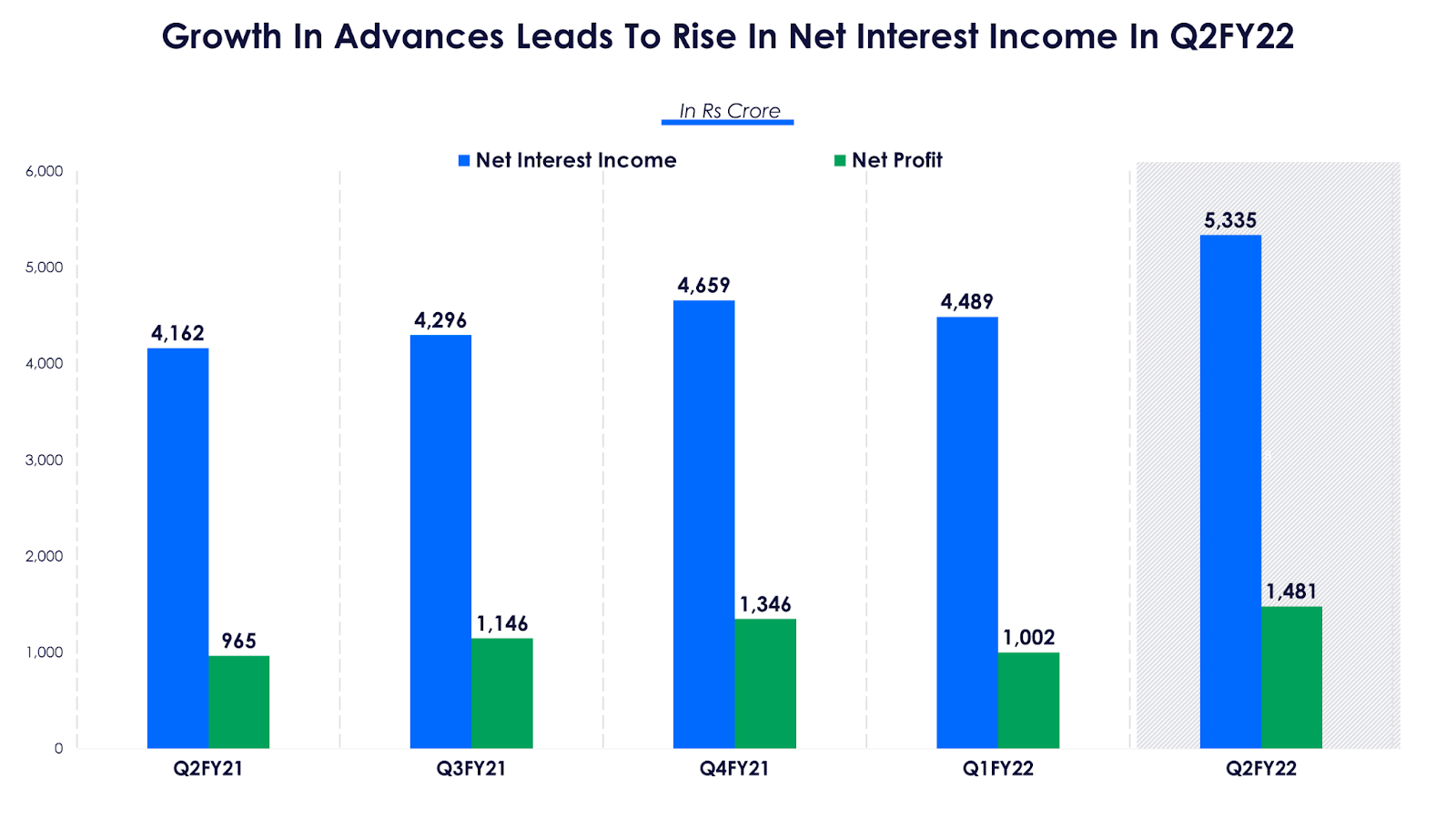 AUM at Rs 1.67 lakh crore reported 22% YoY growth in Q2FY22 driven by consumer B2C, rural B2C, and SME segments. Barring auto finance, all business segments delivered strong double-digit growth in Q2FY22. Loan losses and provisions for the quarter were at Rs 1,300 crore. Provisions declined 24% YoY and 26% sequentially in Q2FY22. In the absence of a third wave, loan losses and provisions are expected to normalize to pre-Covid levels of Rs 700-800 crore in H2FY22. With lower provisions and higher NII growth, net profit surged 53% YoY reported at Rs 1,481 crore vs Rs 965 crore, a year ago. 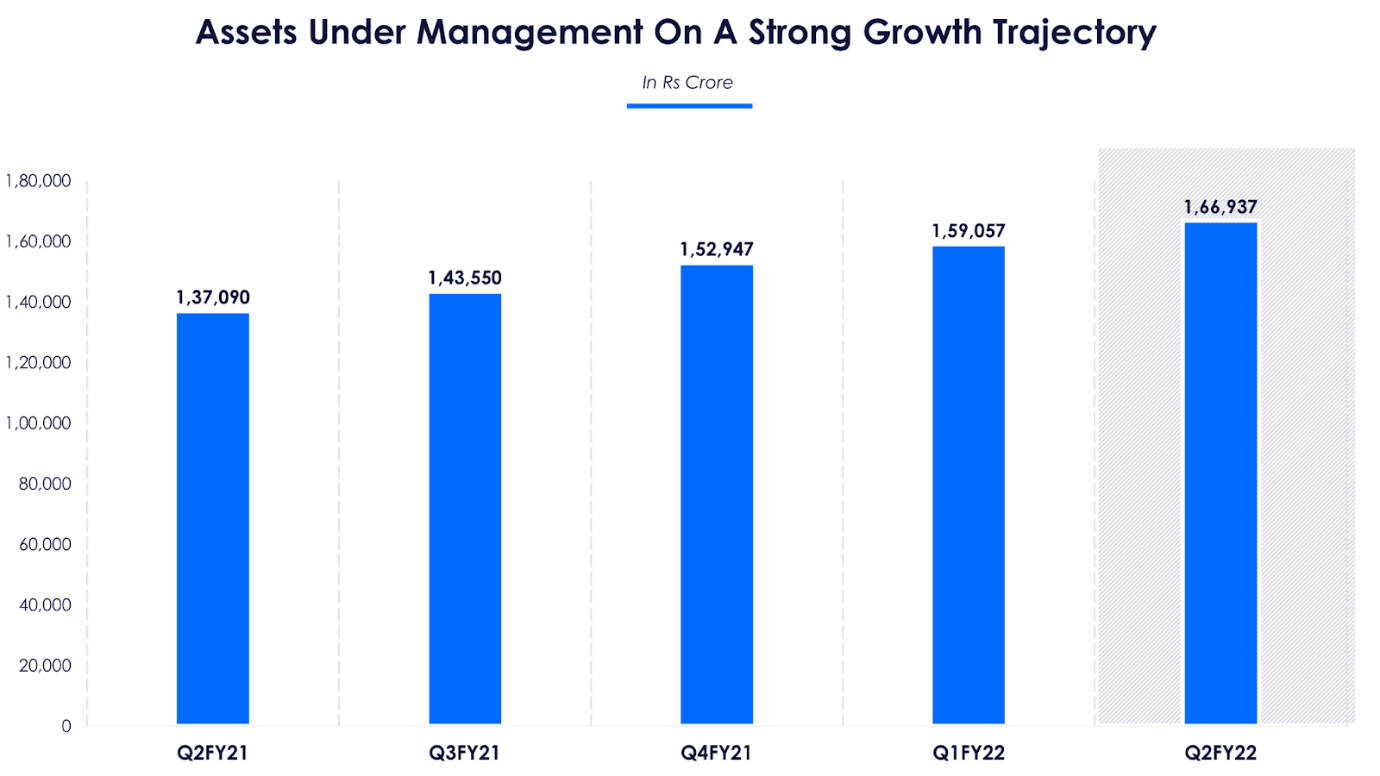 To protect itself from a potential third wave, BAF increased its management overlay provision from Rs 483 crore in Q1FY22 to 832 crore in the September 2021 quarter. Management overlay provisions are adjustments made to expected credit loss (ECL) models to capture risks caused by uncertainties such as Covid-19. Deposit book grew by 33% YoY to Rs 28,720 crore as on September 30, 2021 with the retail and corporate mix at 77:23 contributing 20% of total borrowings.

As the economy unlocked after the second wave, the street expected a healthy set of numbers from Bajaj Finance. Investors were not disappointed: the NBFC reported strong customer acquisition numbers and robust AUM growth in Q2FY22. With higher upgrades and recoveries, strong sequential improvement in asset quality also relieved investors.

BAF booked 6.6 million loans in Q2FY22, the highest over the past six quarters. Rajiv Jain, Managing Director at Bajaj Finance, said that though new loan acquisition is not near the Q3FY20 levels of 7.67 million loans, the management aims to cover up the gap over the next few quarters. With a total customer franchise of 52.8 million as on September 30, 2021, the company acquired 2.4 million new customers in Q2 FY22 as compared to 1.2 million, a year ago. Speaking on new customer acquisition, Jain said that the NBFC is on track to add seven to eight million customers in FY22. 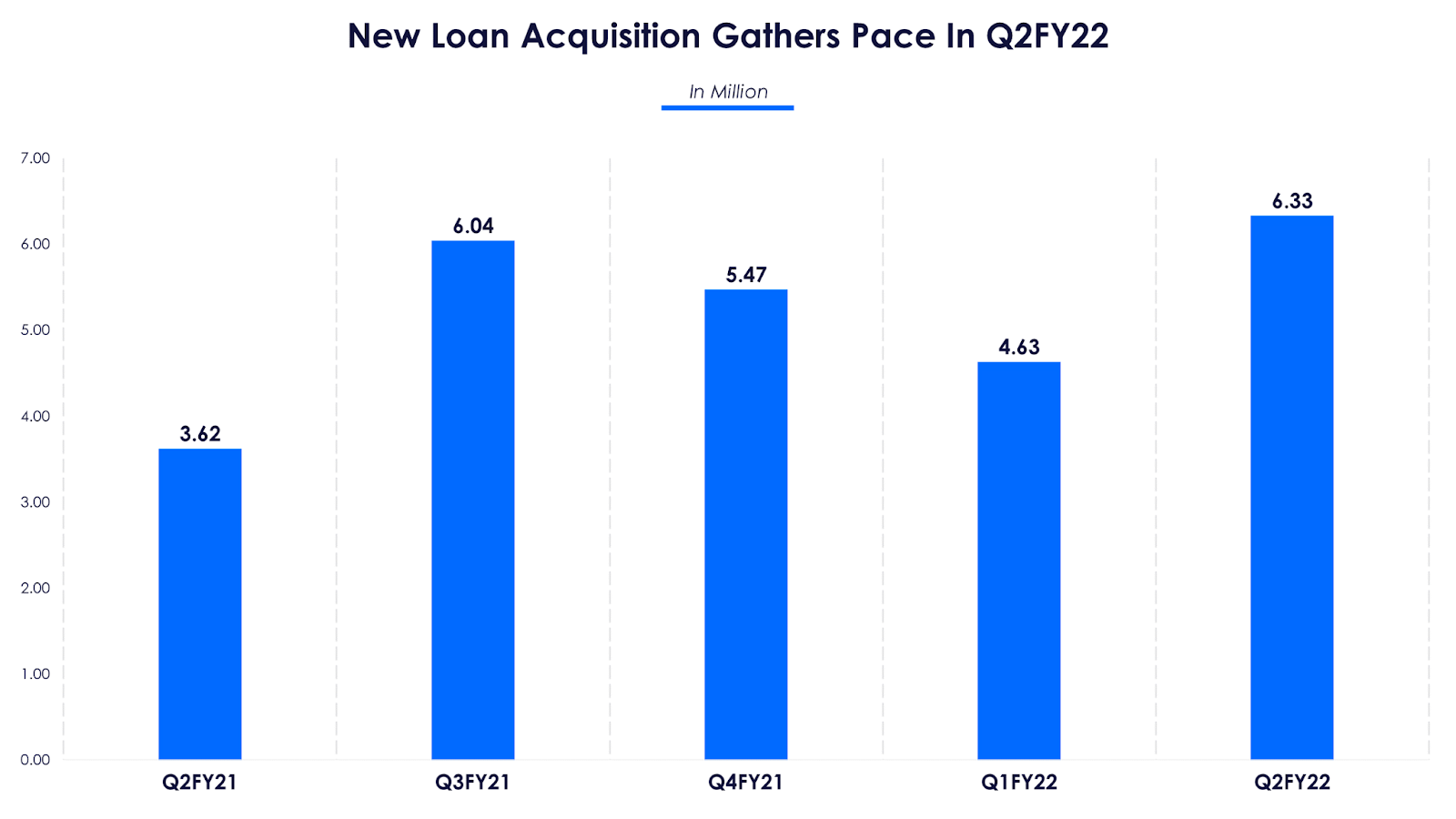 Bajaj Finance reported core AUM (excluding IPO financing and losses due to COVID-19 pandemic) of Rs 11,150 crore, the highest ever in a quarter. This indicates strong AUM growth momentum.

Core AUM declined 56% YoY in Q1FY22 due to slowing down of B2B business (16% of total AUM). Auto finance (40% of B2B AUM) declined 11% YoY in the June 2021 quarter and continued its consistent decline in Q2FY22 with a 15% YoY fall and contributed  6% to overall AUM mix down from 9% in Q2FY21. Speaking on AUM growth, Jain said that while auto finance business is not going up, all other businesses rose strongly in Q2FY22 and the management expects quarterly AUM growth for the rest of the year to be quite strong in absence of a third wave. 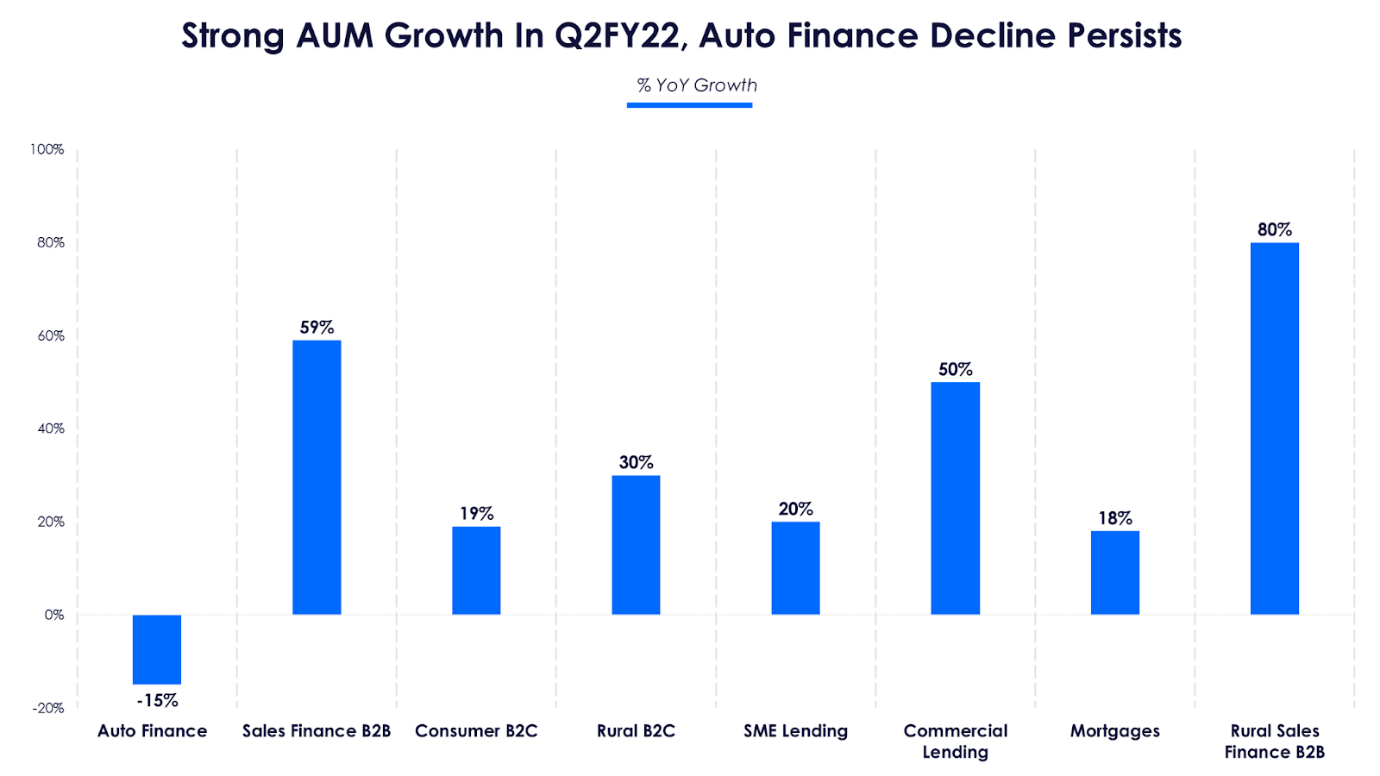 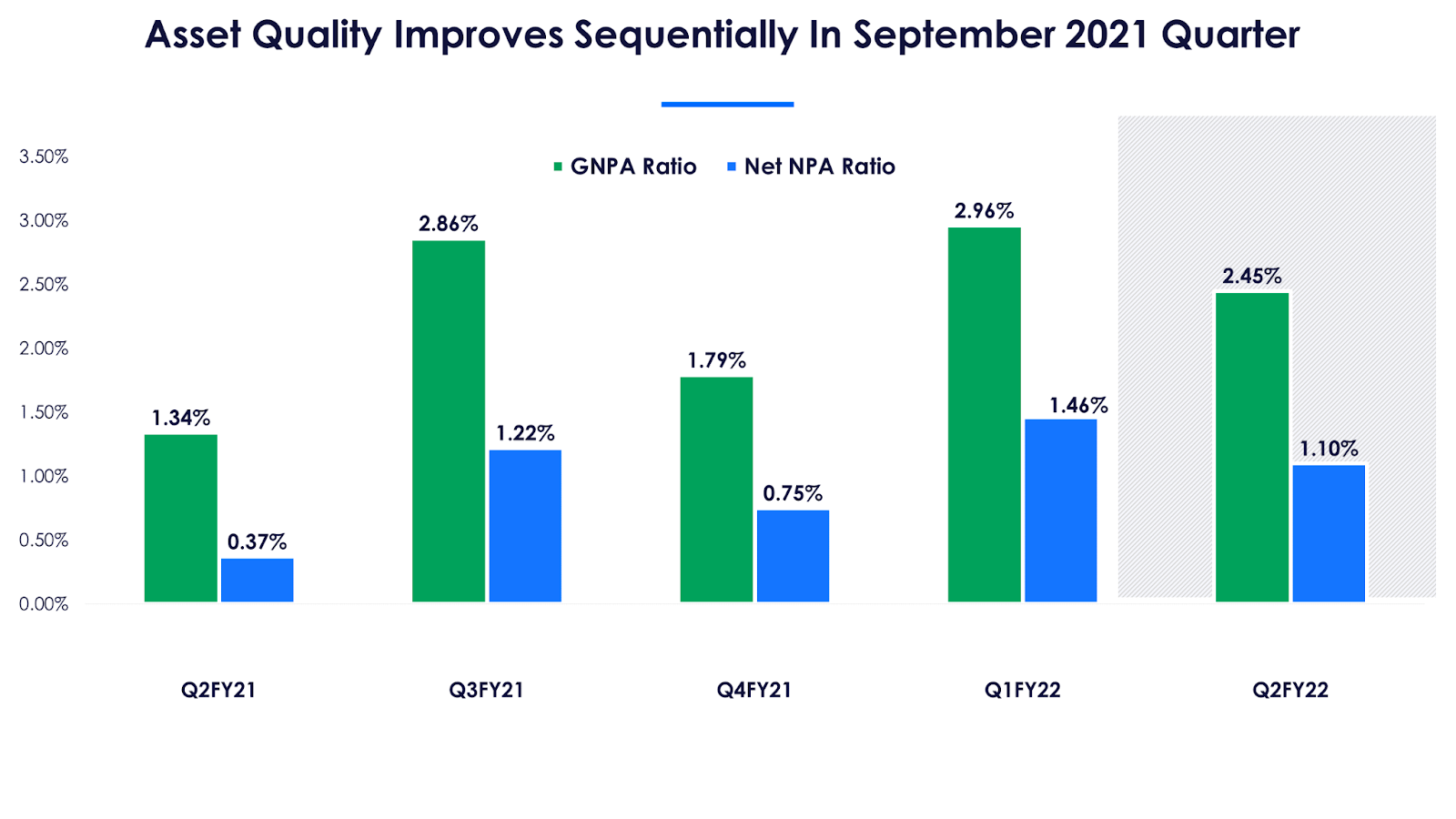 Auto Finance gross NPA ratio and Net NPA ratio declined 315 bps and 290 bps respectively in the September 2021 quarter. Auto finance will take the longest time to recover compared to other segments, said Jain. He further added that within auto finance, two-wheeler and three wheelers have gone through a reasonable stress for Bajaj Finance.

Other changes are afoot in the auto market for Bajaj Finance. The NBFC is largely dependent on Bajaj Auto for its two-wheeler and three-wheeler segment. Bajaj Auto recently announced setting up its own captive finance subsidiary. Bajaj Finance management is thus evaluating diversifying towards other original equipment manufacturers (OEMs). This would reduce concentration risk which played a significant role in increasing stress levels in the two-wheeler segment and control NPA levels. But in three-wheelers, the NBFC intends to do business only with its sister concern, Bajaj Auto. 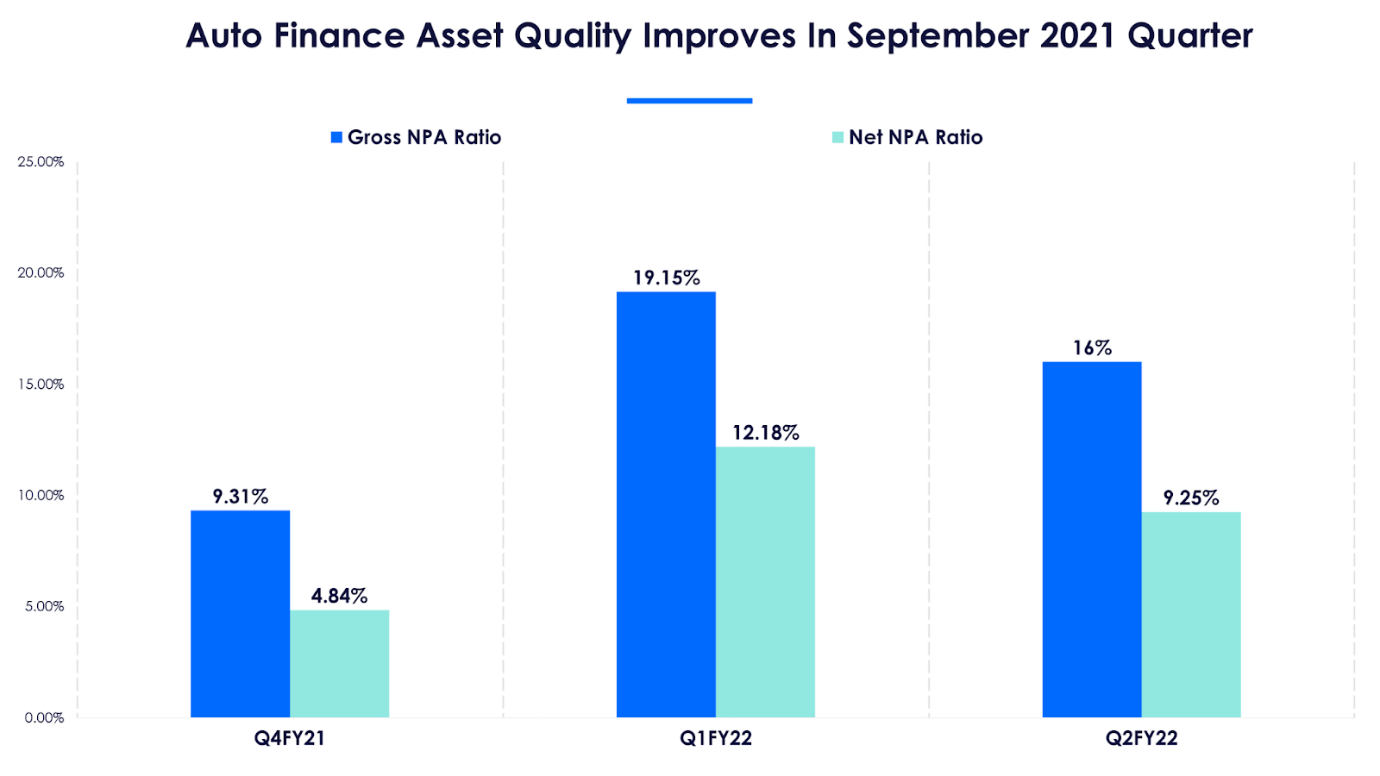 Banking behemoths ICICI Bank, HDFC Bank, Axis Bank, and Kotak Mahindra Bank are all feeling the heat from fintech companies such as Paytm and Phone Pe as mobile wallets, digital lending, mobile banking is now widely adopted and mechanisms such as Unified Payments Interface (UPI) and Bharat Interface for Money (BHIM) have created a paradigm shift in payment infrastructure In India.

Pushed by the pandemic, the banking and NBFC sectors are both accelerating their digital evolution, and are ready to partner with the fintech players to maintain their profitability metrics. Initiating its digital journey in 2019, BAF is currently on an accelerated digital transformation trajectory, hastened by the pandemic. BAF launched its wallet business (Bajaj Pay) on July 1, 2021. The management expects to onboard 20-25 million wallet customers by March 2023.

Speaking on the wallet business (3.1 million customers in Q2FY22), Jain said that the company is onboarding 8 lakh to a million new wallets every month. To become a full-service payments player, Bajaj Finance applied to the RBI for Payment Aggregator (PA) & Bharat Bill Pay Operating Unit (BBPOU) licenses. The company is also upgrading its consumer app in phases by developing five proprietary marketplaces, EMI store, insurance, investment, health and the broking app. The consumer app is currently functional for 10% customers and will be fully rolled out by April-May 2022.

The EMI store strategy is starting to yield results as store visits increased from 10 million in Q4FY21 to 30 million in Q2FY22. Jain said that the company started to stimulate the entire customer franchise through the EMI store resulting in 250,000 new loans in Q2FY22. Similar to Bajaj Pay for consumers, BAF is also launching its merchant app with four stack payments, prepaid payment instruments (PPI), UPI, EMI card and credit card. Merchant app is expected to be launched in January 2022 subsequent to PA license approval.

The company intends to revive its retail EMI business (impacted by the pandemic) by weaving it into the merchant app.

BAF capped its retail EMI (REMI) business to 50,000 accounts a month and increased ticket size from Rs 10,000 to Rs 15,000 a month. REMI is nothing but a ‘Buy Now Pay Later’ product, like those introduced by many of BAF’s competitors such as Amazon, Flipkart, and Paytm. Even ICICI Bank and Axis Bank are offering pay later options. Private sector banks offering zero EMI options for consumer loans and home loans at low-interest rates are all intensifying competition in the financial services sector.

For providing merchant payment services, it's going to be a crowded place as Amazon, Phone Pe, Pine Labs, Paytm, Bharat Pe, Zomato and many other players have also applied for a PA license. With this backdrop, it would be interesting to see how Bajaj Finance strategizes to achieve its target of 100 million customers.