Midcap IT needs to deliver to justify high valuations

As an investor, you need to have the immense conviction to hold on or add stocks from certain industries to your portfolio. This is especially true if you are looking to invest in the Indian IT services space as valuations are sky-high, especially for midcap IT services companies like L&T Infotech, Mindtree, L&T Technology Services, Mphasis, and Coforge.

Out of the three L&T Group companies, L&T Technology Services is the most expensive trading at a trailing twelve-month PE (TTM PE) ratio of 60, while L&T Infotech and Mindtree are a little under 50. While there has been a general expansion in PE ratios in the IT services space, with many midcap IT stocks being rerated by analysts over the past 18 months, the surge in valuations is still astounding. 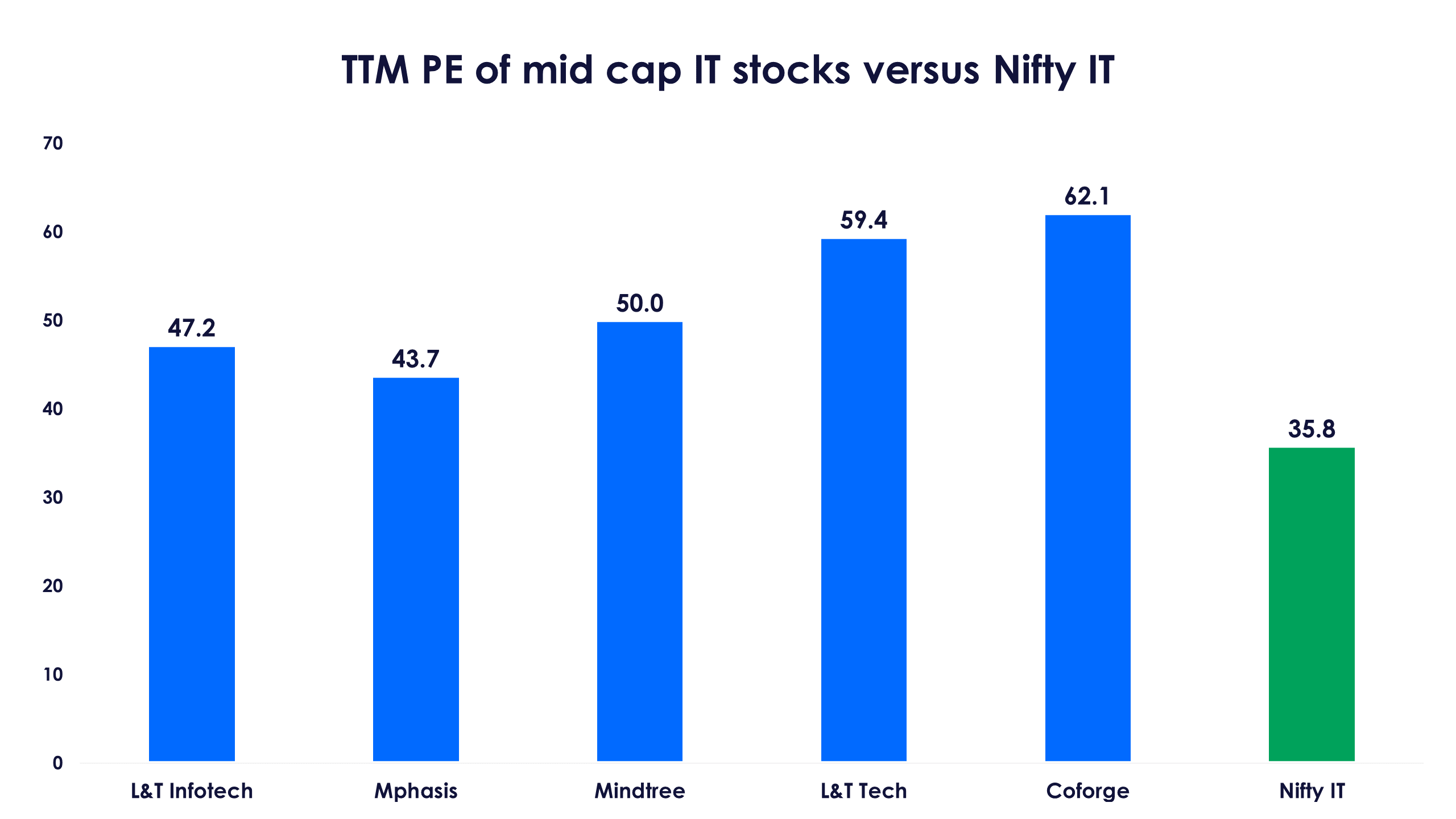 To put things in perspective, while the Nifty IT index is currently trading at a TTM PE of over 36, Coforge is trading at a little over 1.7 times the sectoral index at a TTM PE of 62. But Coforge’s valuation is probably justified by the company’s guidance for 19% YoY revenue growth in constant currency terms in FY22.

Order wins point to robust growth in the future

The pandemic has pushed many companies, that were still on the fence on investing in upgrading their technology stack, into action. This led to five consecutive quarters of rise in revenues for the midcap quintet of L&T Infotech, Mindtree, Mphasis, and L&T Technology Services. 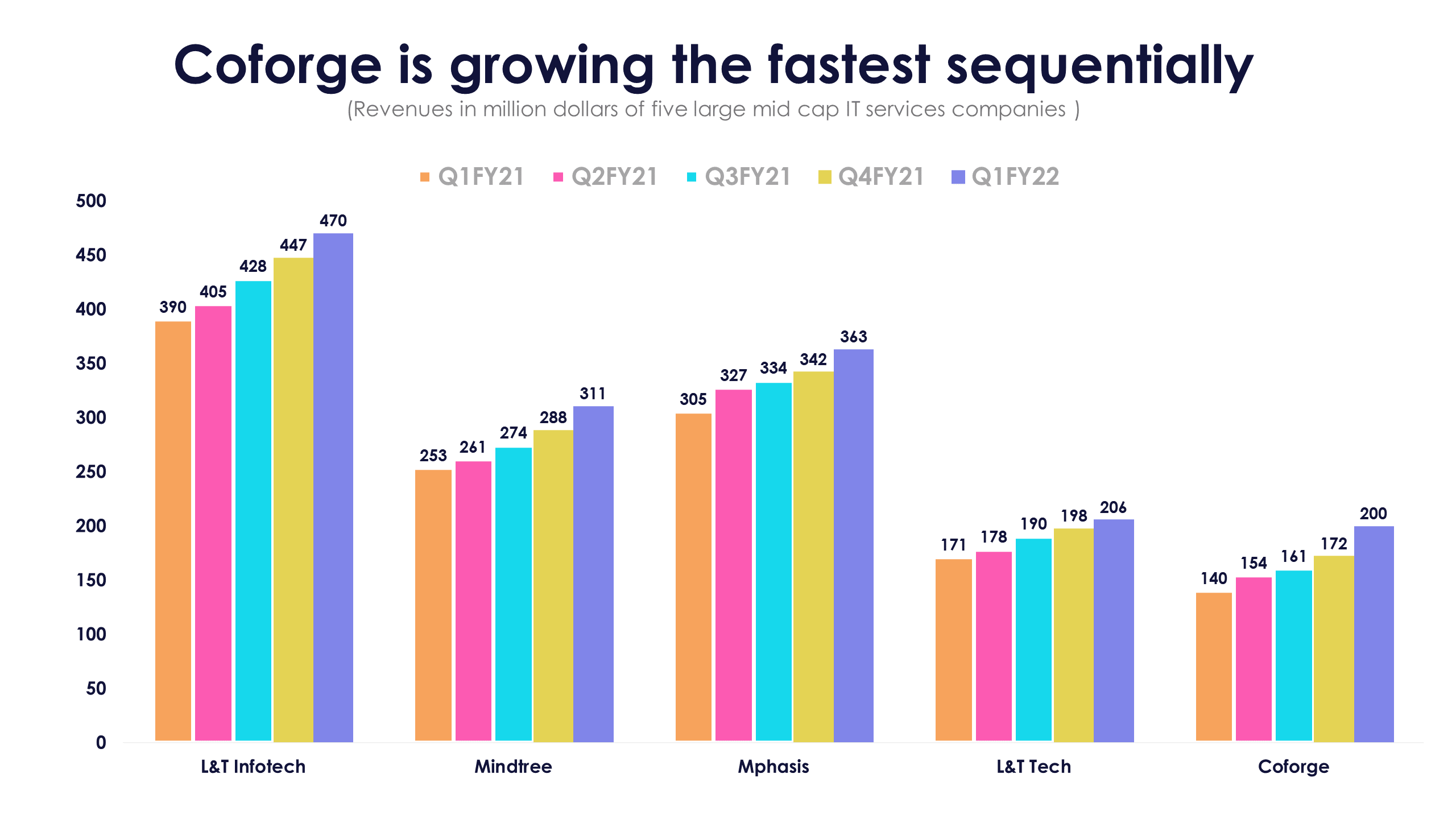 The rising deal wins across many verticals for these companies indicate that there might be enough room to grow. Unlike in the past when some large deals didn’t come with a long contract period, there have been deal wins that run into multiple years. This is pointing to a secular rise in IT spending by businesses globally to keep themselves relevant to a more digitally-connected world. 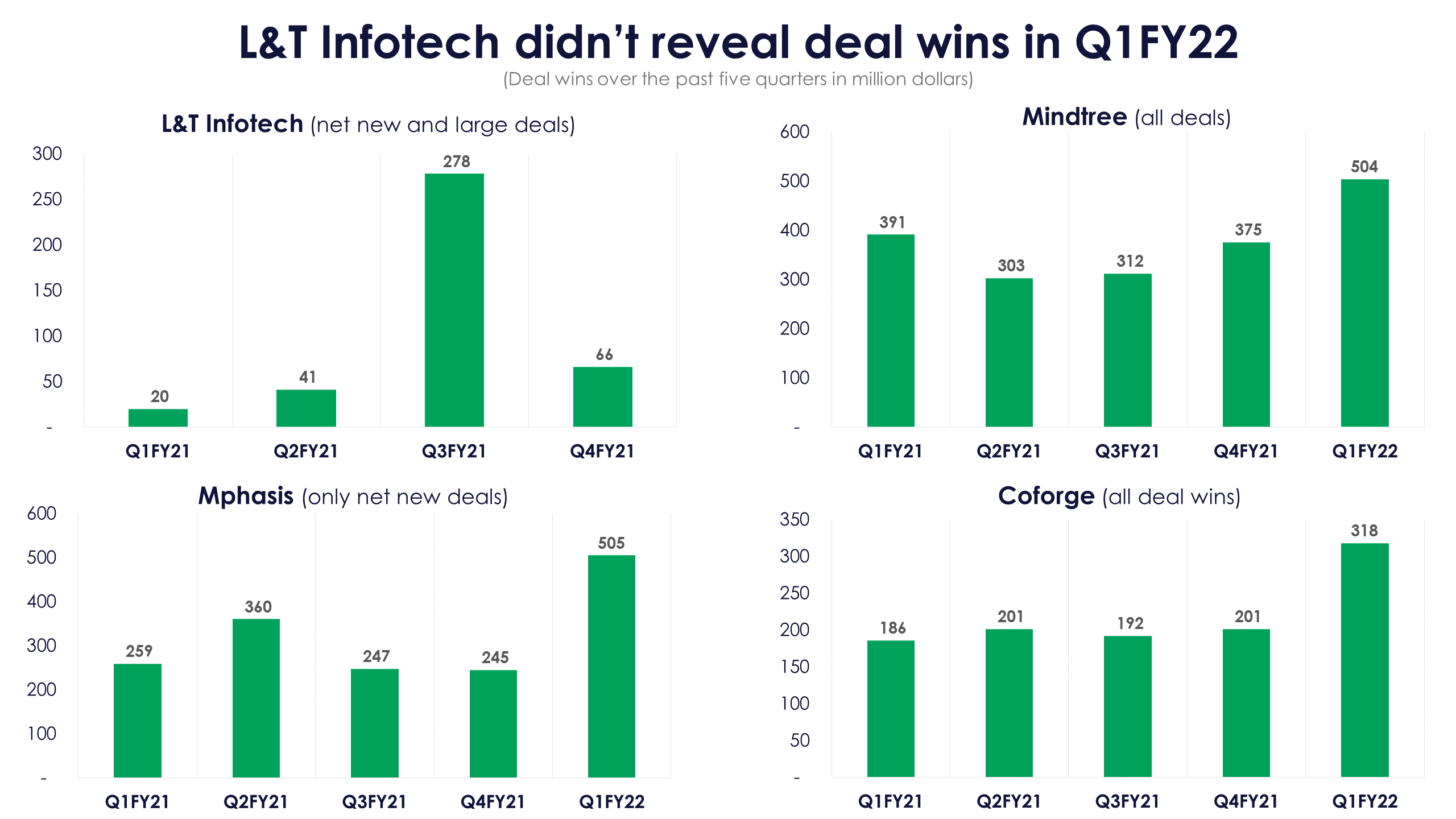 Coforge (earlier NIIT Tech) saw an over 50% QoQ rise in deal wins at $318 million, its highest ever. The company bagged a deal worth $ 105 million, another three large deals, in the June 2021 quarter. This is the reason the management said that it doesn’t expect any headwinds in revenue growth. This is probably the reason the company upgraded its organic revenue growth guidance to 19% YoY in FY22, compared to the 17% it guided earlier.

Similarly, Mphasis also saw its highest deal wins in a quarter at $ 505 million in Q1FY22, which is twice that of the previous quarter. This includes a $250 million deal with a banking, financial services, and insurance sector client from the UK. This strong deal pipeline means the company is on a strong footing to touch double-digit YoY revenue growth in dollar terms.

Even Mindtree saw its highest-ever deal wins in a quarter at $504 million in Q1FY22, which include a fair number of multi-year deals (3-5 years), according to the company. They also included renewals. Many deal wins were in the customer success, data & intelligence and cloud service lines. These service lines make up nearly 75% of the company’s revenues, while customer success and cloud verticals grew the most during Q1FY22.

Although L&T Infotech usually discloses its net new deal wins, the company didn’t do so in Q1FY22. The company grew at 4-5% QoQ in the past four quarters. The past deal wins portend a sustained growth runway for the largest of the L&T Group IT services company.

Growth is the only way margins will rise

When the pandemic broke out last year at the end of FY21, almost all IT services companies saw lower costs as discretionary expenses like travel and sales and general administration businesses were put on hold. This helped margins rise in the first half of FY21. 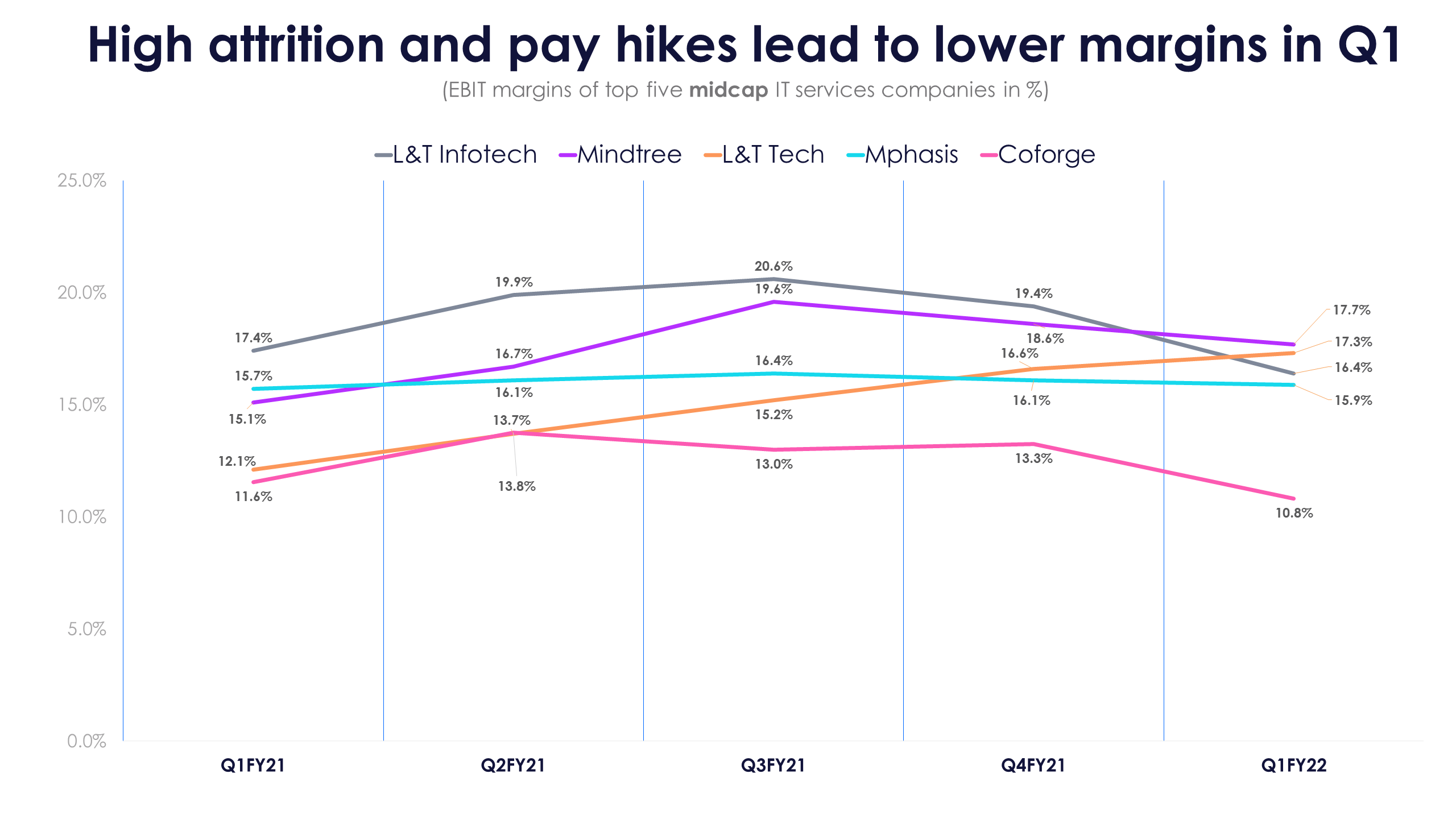 But as growth returned due to a spike in demand for IT services, it pushed up the industry’s attrition rates. There are apocryphal stories coming out of the IT sector that employees are being hired at 3-4 times their previous salaries by companies hunting for talent. The large IT services companies like TCS, Wipro, HCL Tech and Infosys will hire nearly 1.5 lakh new employees in FY22. This sets the trend for the rest of the industry as well.

With rising demand, and employee utilisation at high levels across the industry, companies are having to pay through their noses to hire good talent to execute orders in time. This has led attrition to rise to pre-Covid19 highs for most companies except for TCS. This means the growth that investors will see over the next few quarters will not be as profitable as they hoped it would be. 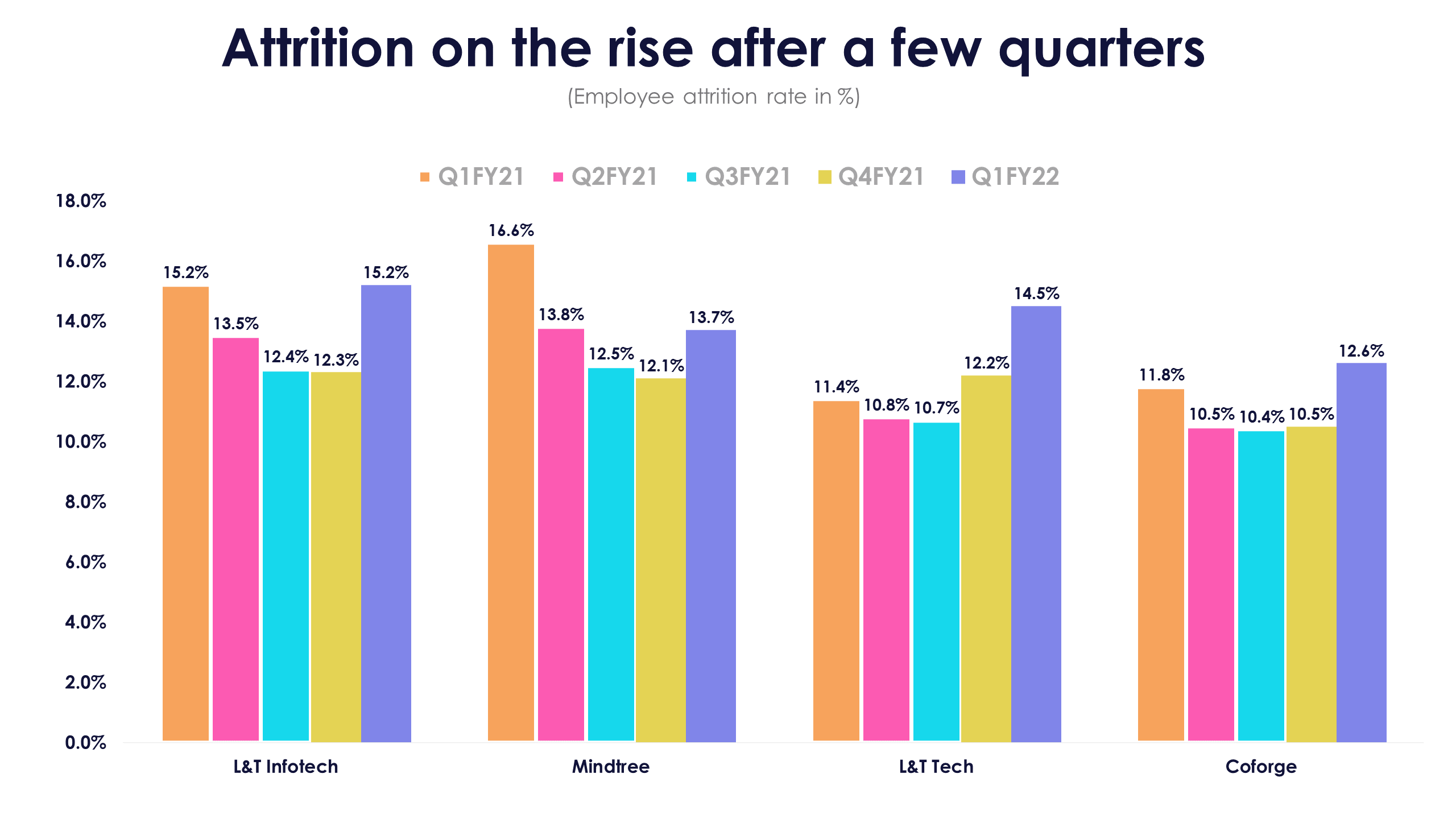 High attrition has put paid to plans of delivering highly profitable growth. The one thing that can change this phenomenon is operating leverage. As midcap companies sort out their supply-side problem of good talent to serve in the projects that they undertake, deal ramp-ups will slowly become less expensive. Companies usually use sub-contractors or consultants when they face a shortage in talent to serve on projects. This hurts their margins as subcontracting costs almost move in tandem with revenue growth.

Keeping these factors in mind, it might seem that some of the exuberance in the shares of listed IT services companies is overdone, it appears the investors and analysts are convinced of revenue growth among midcap companies. What this also means is that there is no room for error for the likes of Coforge, L&T Infotech, Mphasis, and L&T Tech. The robust revenue growth train must continue for investors to show faith at these elevated valuations.