For Eicher Motors, the signs were there. Lockdowns easing, supply-chain clearing up, demand reviving, and the festive season approaching. Yet, it didn’t deliver. What was reflected in its price rally, didn’t manifest in its Q2 results.

Auto stocks have been hurting for the past three years. Despite Nifty Auto’s 96% rise since the lows of March 2020, it still trails its January 2018 high by 25%. In that time, Eicher Motors’ stock price is down by 14% but fares better than its peers. Bajaj Auto, Hero MotoCorp, and TVS Motors. Collectively, the quartet sold nearly 70% of the two-wheelers in India as of August 2020.

However, Eicher Motors’ subsidiary Royal Enfield’s hold is loosening, and competitors are creeping into its mid-size market. Following the Q2 results, and the October sales numbers, it is clear that of the four auto-heavyweights, Eicher Motors stock is the outlier.

The street expected Eicher Motors to have a good second quarter. In the weeks before its results were announced, its share price jumped 25%. But the earnings were disappointing.

Royal Enfield, which makes up 80% of the company’s profits, saw healthier quarterly sales, compared to the commercial vehicles (CVs) division. sales in Q2 stood at 1.5 lakh units, down by 10.7% annually, but recovered sequentially by 150%. Production capacity was ramped up to 70% of normal capacity in Q2, from 45% seen in Q1. The management said 70,000 units per month are being produced right now, and they are optimistic to increase this to the pre-COVID level of 1 lakh units per month.

In H1, Royal Enfield built up an order backlog of 1.2 lakh units, which will be executed in H2. This backlog has accumulated since June when dealerships reopened. Between May to October, orders of around 20,000 units began piling up in the Bullet, Himalayan, the Interceptor INT 650, and the Continental GT 650 ranges.

The previous quarter saw Royal Enfield expand its store footprint. In Q2, 158 stores were added, amounting to 1,717 stores across 1,400 cities. Royal Enfield’s has 771 studio stores, most of which are in states where it has a lower market share, like Uttar Pradesh, Madhya Pradesh, Rajasthan, Odisha, Bihar, Andhra Pradesh, and West Bengal.

Between FY16 to FY20, Royal Enfield’s revenue from international business has grown from Rs. 147 crores, to Rs. 861 crores, a 54% CAGR. Royal Enfield expects to add 15 stores to its existing 85 overseas stores across 24 countries. An assembly unit is coming up in Argentina, and Thailand to cater to the Latin American and Southeast Asian markets. Royal Enfield has 55 exclusive outlets in these regions.

With commercial movement still wayward, Eicher Motors’ CV division, VE Commercial Vehicles (VECV) failed to recover from the previous quarter’s losses. It reported a net loss of Rs. 7 crores in Q2, against a profit of Rs. 16 crores in Q2FY20. In Q1, VECV reported a Rs. 120 crore loss, as economic activity was at a standstill. Revenue was Rs. 1,675 crores in Q2, a decline of 12.1% on a YoY basis. On a sequential basis, revenues more than tripled from the quarter ended June 2020.

VECV’s sales stood at 8,167 units in Q2, down by 28% YoY. The main drag in the CV segment were buses, 83% volume drop, and heavy-duty trucks, 59% volume drop, in H1FY21, compared to the first half of FY20. The demand for public transportation vehicles was muted, due to the closure of schools and decreased intra-city movement.

During the quarter, VECV completed the acquisition of Volvo Buses India for Rs. 100.5 crores. This marks its entry into the mid-premium bus segment, covering manufacture, assembling, distribution, and sale of Volvo Buses domestically.

However, H2 demand is expected to spur a recovery. The company is seeing a revival in rural demand in niche segments like construction, mining, and agriculture. Urban demand was boosted due to the festive season as e-commerce companies needed light commercial vehicles and medium commercial vehicles for intra- and inter-city deliveries.

VECV is also expecting replacement demand in H2. Vinod Aggarwal, the CEO of VECV said, “this industry [commercial vehicles] is driven by replacement market,” highlighting that every four to six years trucks are replaced, and over the past two years replacements were low. Aggarwal expects this “pent-up replacement demand” to bear fruit by Q4FY21.

Royal Enfield sales are expected to rise due to the launch of Meteor 350, a mid-sized cruiser, which recorded 8,000 bookings in its first 10 days. The management expects Meteor to lure existing and new customers. Existing customers through upgrades within the Royal Enfield family tree, and new customers of other two-wheeler brands upgrading to premium bikes. During the Q2 earnings call, Siddhartha Lal, managing director of Eicher Motors said,

“Meteor 350 is positioned to appeal to the upgrading pool of two-wheeler customers from other brands. These are those who currently ride commuter models (100-200cc) and want to upgrade to bigger and more premium bikes.”

In the international markets, the entry-level cruiser is expected to drive sales in Latin America and Southeast Asia. Two-thirds of Royal Enfield’s exclusive stores are located in these regions, concentrated in Brazil (10) and Thailand (15). With the scheduled plant openings in this region, sourcing and supply will be made easier.

Royal Enfield is also betting on direct and faster orders through its Make It Yourself (MIY) application. MIY, launched in October, is an order delivery, fulfillment, and customization application for customers.

Analysts noted that the MIY app would enable upselling and increase add-on purchases in the coming quarters. For instance, Meteor, the first post-MIY motorcycle, allows over 5 lakh personalization options compared to the Thunderbird at 65 options. The management said 90% of Meteor orders were placed through the MIY app.

In Q2, Royal Enfield sales revived and VECV lagged behind, but the opposite is true for October’s sales figures. Among two-wheeler companies, Royal Enfield was the only one that saw lower sales numbers in October, on a yearly basis. Given the niche appeal of its motorcycles, at a time when discretionary spending was muted, demand for such products suffered.

In October 2020, Royal Enfield’s sales declined by 7% to 66,891 units on a YoY basis, while each of its competitors saw a rise. TVS Motor Company’s two-wheeler sales grew by 24% to 3.8 lakh units, with its premium motorcycle Apache clocking over 40,000 sales, an 8% increase on the previous month. Bajaj Auto sold 2.6 lakh two-wheelers, an 11% growth. Its main premium sellers were Bajaj Pulsar, which saw its highest-ever monthly sales at 1.7 lakh units, Bajaj Dominar 400 and Dominar 250 selling 1,818 units and 1,750 units in October, highest monthly sales all year. 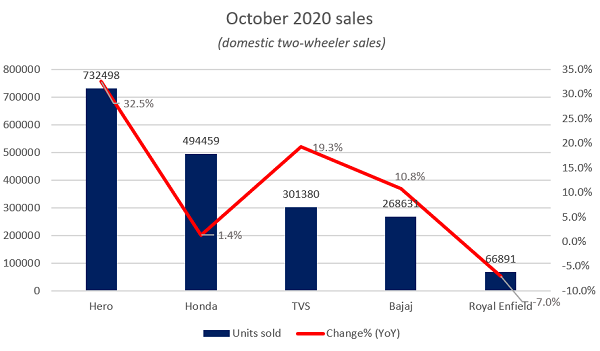 Hero MotoCorp, the two-wheeler market leader, operating in the commuter space sold 8.1 lakh two-wheelers in October 2020. Motorcycles, within the 95cc to 200 cc range, sold 7.3 lakh units in the month, up by 32.5% on a yearly basis.

On the bright side for Eicher Motors, VECV saw resurgent sales numbers in October. VEVC reported sales of 4,200 units in October 2020, an 11.9% growth annually, led by trucks and buses. Exports dropped by 15.3% to 315 units on a YoY basis, while domestic sales moved higher by the same proportion, selling 3,815 units.

Ashok Leyland, under the Hinduja Group, fared worse, recording a marginal 1% increase in October sales at 9,989 units, with declining sales in heavy and medium CVs by 11% on a year-on-year basis. Mahindra & Mahindra’s CV sales fell 23.5% to 23,716 units on a year-on-year basis, while exports declined by 25% annually.

However, mutual funds seemed to have pared their holdings right before the three-week rally. Between November 1 to November 24, Eicher Motors’ stock rose by 25% in anticipation of its Q2 earnings. But were not as great as the street expected. 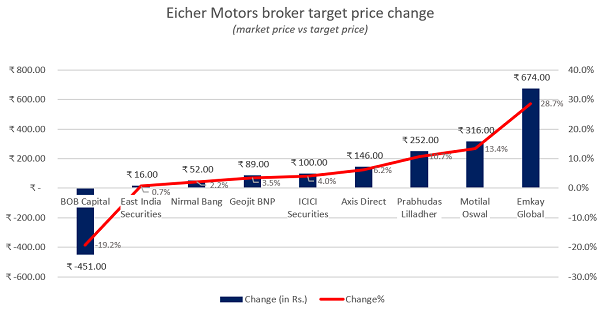 Geojit BNP Paribas maintaining a ‘Hold’ rating on the stock said Eicher Motors has a “limited upside potential at current price levels.” Axis Securities downgraded the stock from ‘Buy’ to ‘Hold’ but raised its target price. The brokerage expects volume to drop by 11% in FY21, and recover by 25% and 12% in FY22 and FY23, respectively. BOB Capital Markets maintained a ‘Sell’ on Eicher Motors citing lofty valuations at 27 and 30 times the expected FY22 and FY23 EPS, estimating a 24% downside against its trading price.

Since Q2 earnings were announced, Eicher Motors’ stock has gained 12.7%, higher than the average broker target upside of 5.6%. However, with everything from IT to Realty trading in the green, as the Nifty makes record highs, the Eicher Motors’ rally might run out of steam.