The Jet Airways revival: Another layover or the final destination for India's oldest private airline?

While their planes haven’t taken to the skies since last year, their stock has. Jet Airways, the oldest private-passenger airline in the country has been grounded since April 2019, but its stock has jumped by over 200% in the past 52-weeks, and by 33% in the past month.

On October 19 the airline’s committee of creditors (CoC) approved a resolution plan, signaling an end to a grueling 18-month long revival process. However, long-term hopes still remain bleak. Making things worse, Jet’s revival is not straightforward. With a smaller fleet, fewer slots, the fear of travel, and a partially opened economy, Jet Airways’ second take-off is unlikely to be met with clear skies.

A timeline of events: 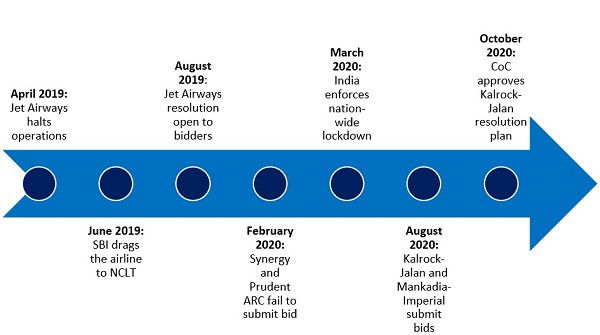 On 17 April, Jet Airways, which had already racked up $1.2 billion (Rs. 8,843.9 crores) in debt, was informed by State Bank of India (SBI), the main lender, of a rejection of “critical interim funding.” Jet Airways, in a press statement released on the rejection of the funding, said,

“Since no emergency funding from the lenders or any other source is forthcoming, the airline will not be able to pay for fuel or other critical services to keep the operations going.”

SBI, acting on behalf of a consortium of creditors, denied the private airline’s additional request for a $58 million (Rs. 427.4 crores) funding round. Sources at the time stated that the bankers opted against a piecemeal-lending process which would have kept Jet off the ground for a few days but would result in it returning with another funding request. Jet Airways’ lenders were already holding a 51% stake in the airlines since March 25.

Even before the rejection of funding, Jet’s fleet was massively reduced. Prior to its operations coming to a halt, the airline had only 20 planes, down from a high of 123 planes operating over 650 flights both domestic and international, with over 16,000 employees. 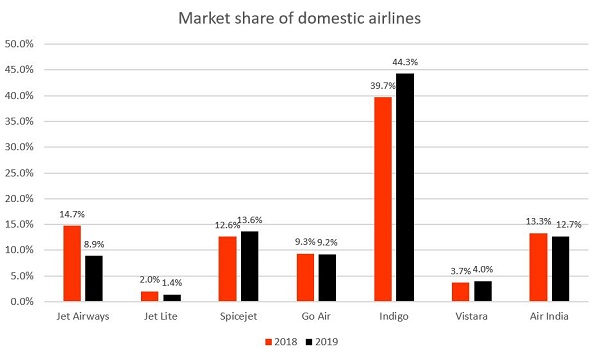 With the growth of low-cost airlines like IndoStar Aviation’s IndiGo and Spicejet and the entry of Tata SIA Airlines’ Vistara, the premium-feel of Jet Airways was being budget-ed out. In 2018, when its credit-crisis was surfacing, Jet had 14.7% of the market share, while IndiGo and Spicejet had 39.7% and 12.6% respectively, according to data from the Directorate General of Civil Aviation (DGCA). In 2019, Jet Airways’ market share dropped to 8.9%, eaten by IndiGo, Spicejet, and Vistara, increasing its share to 44.3%, 13.6%, and 4% respectively. Jet Airways’ low-cost subsidiary Jet Lite also got booted, reducing its share from 2% to 1.4%. 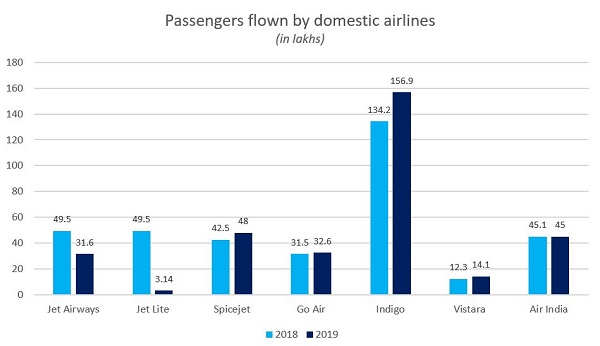 Unsurprisingly, as Jet began to descend on the debt-burden, other airlines began spreading its wings. Since the press statement was published, not a single domestic or international flight of Jet Airways has taken to the skies.

After the bankruptcy confirmation, Jet Airways’ two remaining independent directors Ashok Chawla and Sharad Sharma resigned stating that the airlines’ board is “continuing to be in non-compliance with the provisions of the Companies Act.” In the weeks leading up to the imminent insolvency a number of the airlines’ top executives, including CEO Vinay Dube, CFO Amit Agarwal, human resources officer, Rahul Taneja, and company secretary Kuldeep Sharma quit. A week prior to this barrage or resignations, a whole-time director and two independent directors jumped ship, while the rest of the senior management were reported to be “on vacation,” as the airline’s 27-year-old history was crashing down.

For Chhawchharia, the lack of executives to help him understand the financial mess was the first of his problems, the next was the nature of said mess. Chhawchharia received claims worth Rs. 40,000 crores, in over 16,000 separate claims, of which claims worth Rs. 15,432 crores were admitted, divided between Rs. 7,454 crore for claims from financial lenders, Rs. 6,658 crores from operational creditors, and over Rs. 1,200 crores from employees, and representatives.

The biggest claims made by domestic banks were broken up as follows. 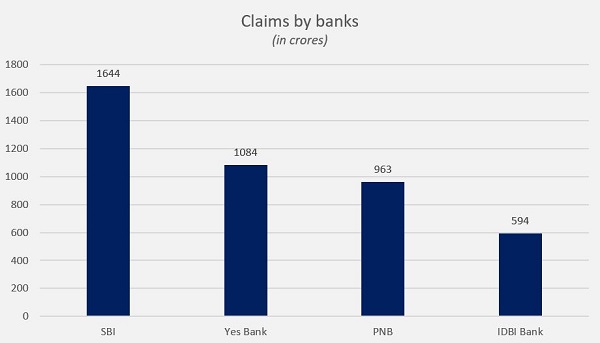 While the internal financial mess was being sorted, Jet Airways’ committee of creditors (CoC) met on August 1, 2019, to entertain the expression of interests (EOIs) from bidders for the grounded airline.

Among the big names that signaled their interest were London-based Hinduja Group, which was approached by lending-banks and the government to submit a bid, Anil Agarwal’s Volcan Investment which owns Vedanta, Panama-based Avantulo Group, Hyderabad’s Turbo Aviation and Kolkata-based Alpha Airways, Prudent ARC and Synergy Group, which was the longest-standing potential bidder.

The one name absent from this long list of would-be owners of the airline was Etihad Airways. The UAE-based airline previously owned a 24% stake in the company and prior to Jet halting operations, Etihad offered its stake for Rs. 400 crores to the main lender SBI. The Gulf airline also offered to sell its majority a 50.1% stake in Jet Privilege.

While several EOIs were submitted to the resolution panel, none materialized into an outright bid. The closet suitor for the airline was Synergy Group, with reports pointing to a 49% stake acquisition. However, unable neither to find an Indian partner nor convince the government to ease foreign direct investment (FDI) norms, the South American conglomerate pulled out in February 2020. Even with the bidding process opening and closing indefinitely between August 2019 to March 2020, the airline did not have a buyer, closing the gates for a revival.

Even Grant Thornton India CEO Vishesh C Chandiok was not hopeful of restructuring and signaled the final destination for Jet Airways, tweeting as recently as March 2020, 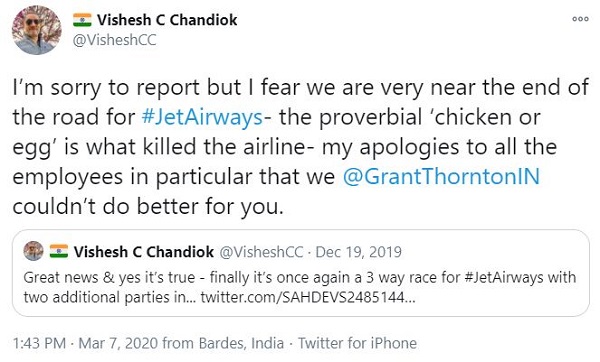 The ‘chicken and egg’ conundrum referenced by Chandiok was the intimation of interests of the potential bidders, but no outright bids.

As Jet Airways’ flight to survive was going nowhere, trouble was brewing. With COVID-19 in-bound, lockdowns the norm, and air travel shut, airlines were the first to feel the turbulence, pushing away potential bidders. Further, the founder of Jet Airways, Naresh Goyal was caught in the middle of the Yes Bank scam. The debt-ridden airline’s loan exposure to the crisis-ridden private-sector bank was over Rs. 500 crores.

“It (Jet) may head for liquidation. Even those who have evinced interest are likely to back out due to the adverse impact of the Covid-19 pandemic on the global aviation industry.”

Once the skies began opening albeit partially, so did a second and a final last-ditch round of bidding. After a series of negotiations, pertaining to the overall restructuring, credit-resolution, and Jet’s remaining slots, two parties submitted revised proposals in August 2020, a full year after the bidding process began.

Sanjay Mankadia, a former Jet Airways captain, and founder of Flight Simulation Technique Center (FSTC) submitted a bid with Dubai-based investment banking from Imperial Capital Investments. The second bid for the airline was from Florian Fritsch, the founder of London-based financial services firm Kalrock Capital Investments, which makes its play in real estate, and venture capital and entrepreneur Murari Lal Jalan, operating in the hospitality business.

On October 19, the Kalrock-Jalan consortium received more than the required 66% votes from the CoC and won the bid for restructuring and reviving Jet Airways. In an exchange filing two days prior, Ashish Chhawchharia stated,

“The e-voting concluded today, ie. October 17, 2020 and the resolution plan submitted by Mr. Murari Lal Jalan and Mr. Florian Fritsch has been duly approved by the CoC (under section 30(4) of the Code as the successful resolution plan.”

The Kalrock-Jalan consortium offered a total of Rs. 866 crores, broken up as Rs. 380 crores as payout to the financial creditors, Rs. 391 crores as non-convertible bonds (NCDs), as well as an equity-stake in Jet Airways and Jet Privilege. Even with the payout, Jet’s lenders are facing a haircut of close to 90%.

While there is no intimation from the company on the revival process, Jet is likely to return next year. In an interview with CNBC-TV18, Ashish Chhawchharia said that Jet 2.0 will be back in the sky within the next four to six months. However, with a smaller fleet of 20 aircraft, and only 3,500 in manpower, the airline will spread its wings first in domestic skies and then move overseas. He also added that partnerships with global players are required during the initial stage of its comeback.

The airline and its new owners are not in the clear just yet. With the NCLT approval remaining, slots to be reclaimed, a parallel investigation of money laundering by the airline’s former promoters, and air-traffic still a fraction of the pre-COVID level, Jet Airways’ return to the skies could still be due for a long layover.