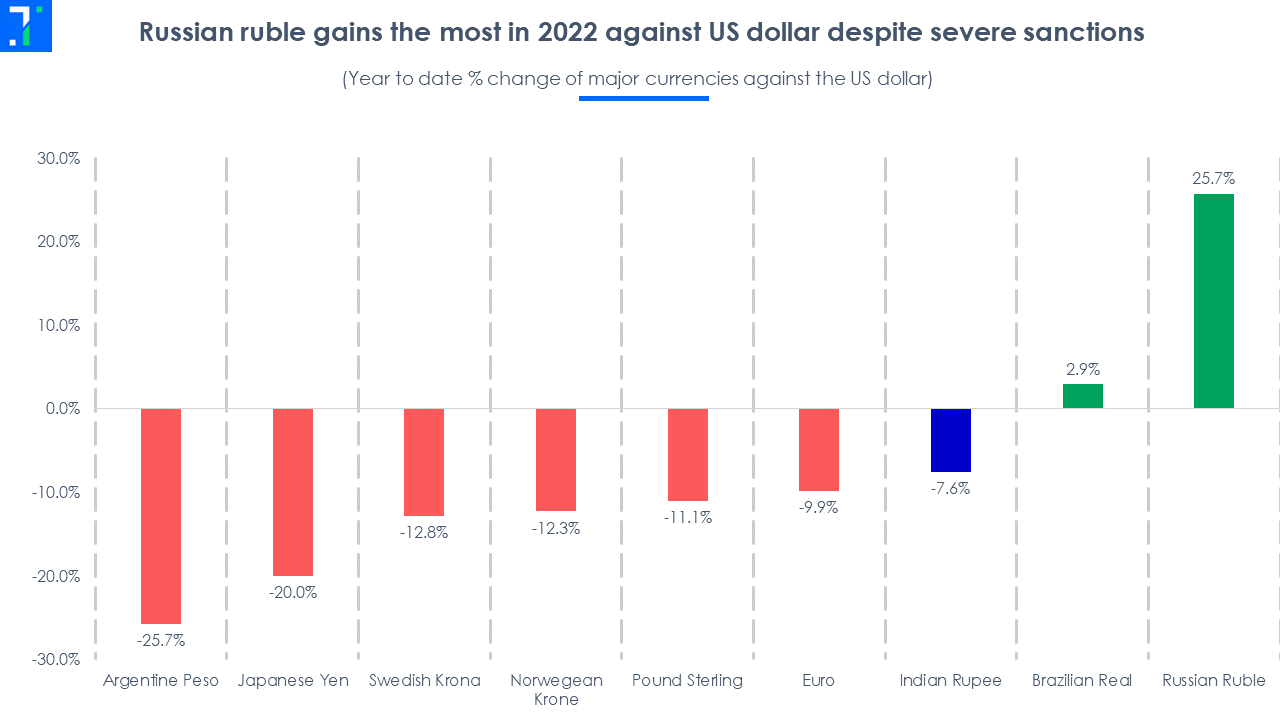 Chart of the week: While several currencies fall, Russian ruble gains against US dollar in 2022

As the Indian rupee touches new all-time lows every other day against the US dollar, it is worth pondering if the going is really as bad as it is made out to be.

High inflation across  the world is forcing global central banks to raise rates to control runaway price increases. And central banks across the world are facing the challenge of controlling inflation in the face of a strengthening dollar. As the US Federal Bank hikes interest rates, the US dollar has gained, making major global commodities like oil that trade in dollars become more expensive for the rest of the world to import.Rising trade deficits and the attraction of the dollar as a safe haven are also driving investor money out of key emerging markets.

In face of this, the Indian rupee’s 7.6% fall year-to-date doesn’t seem all that bad. Breaching the Rs 80 mark against the dollar is being driven by foreign investors pulling money out of Indian equities.

The surprising thing in all of this is the movement of the Russian ruble. After falling sharply due one of the toughest sanctions imposed on the country due its war with Ukraine, the ruble is the best performing currency globally from the beginning of the year, the ruble is up 25.7%. The county’s aggressive approach to stop money from leaving the country and the rising crude oil prices helped it strengthen against the US dollar. Commodity exporter Brazil also saw its Real currency strengthen against the dollar in the first half of 2022, although the trend has reversed since June on recession fears.

For the humble rupee though, it’s not all bad. But we are still at the end of July and there is doom and gloom about recession in the western countries. That could hurt the rupee further.

Share on   Share on   Share on
Like
Comment
8 Likes
More from The Baseline
More from Suhas Reddy
Recommended
Big Bull investor and stock market icon Rakesh Jhunjhunwala never minced his words
Rakesh Jhunjhunwala and Associates | 14 Aug 2022, 10:38AM
The Big Fight: Contest between ICICI Bank and HDFC Bank | 11 profitable stocks outperforming the Nifty500
The Baseline | 13 Aug 2022
Which stocks did superstar investors sell in Q1FY23?
The Baseline | 11 Aug 2022