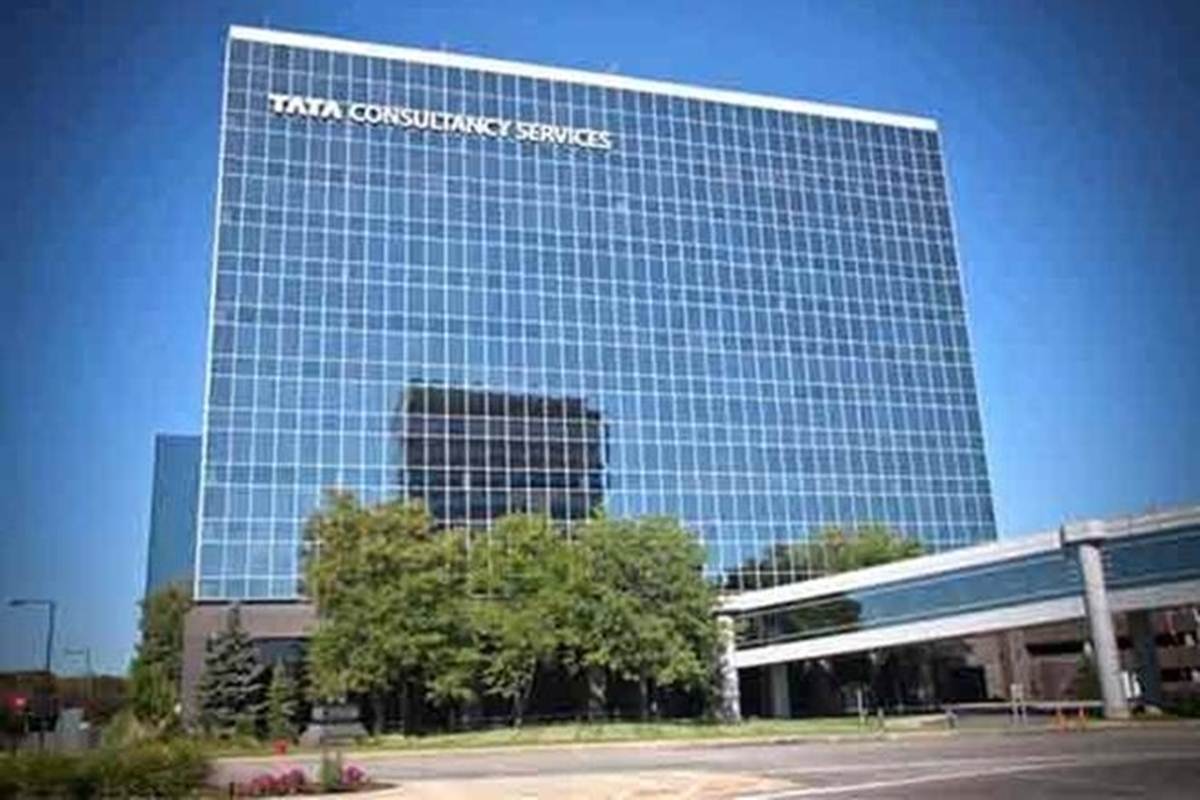 TCS’ Q1 performance signals a slowing IT industry in FY23

Tata Consultancy Services (TCS) was the first tech company to announce its quarterly results for Q1FY23, giving investors and traders a glimpse of how the rest of the Indian IT pack might fare in the earnings season.

Well, the reaction wasn’t upbeat. IT stocks took a beating in Monday’s trade after TCS’ Q1FY23 net profit missed the average of Trendlyne’s …

Tata Consultancy Services (TCS) was the first tech company to announce its quarterly results for Q1FY23, giving investors and traders a glimpse of how the rest of the Indian IT pack might fare in the earnings season.

Well, the reaction wasn’t upbeat. IT stocks took a beating in Monday’s trade after TCS’ Q1FY23 net profit missed the average of Trendlyne’s Forecaster estimates by 4.4%.

On a sequential basis, the company’s net profit fell 4.5% to Rs 9,478 crore. TCS’ shares are trading close to their 52-week low and were down more than 4.6% at the end of trade on Monday. It's as if investors are worried that their worst fears are coming true—that the rapid revenue growth phase for IT services over the past two years is over. 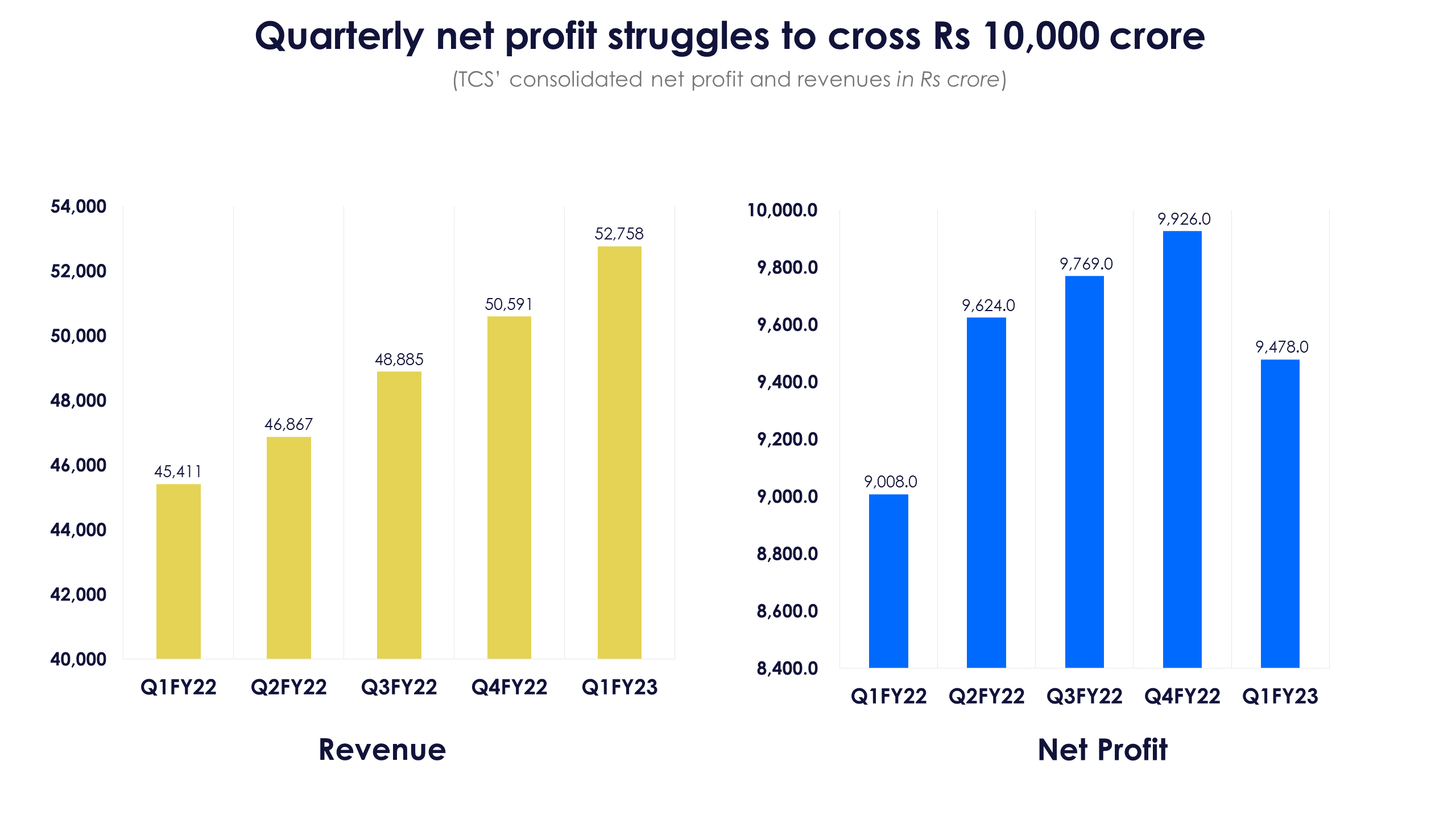 TCS’ management sounded confident on the earnings call, insisting that there is no impact of headwinds due to geopolitical issues in Europe on client spending. But this sunny forecast hasn’t convinced investors, who are fearing the worst for the next few quarters. The company did clarify on possible headwinds due to a recession in the US, Europe, and the UK are part of conversations with clients, but also said that there is no indication of clients pruning their spending. This explains the optimism.  However, not all recessions are equal: the management acknowledged that a possible recession in Europe will be far more difficult to get out of, while a recession in the  US could be a shallow one.

TCS earns over 50% of its quarterly revenues from North America and around 15% apiece from the UK and Europe. The company’s dollar revenues grew a mere 1.3% sequentially in Q1FY23 to $6.8 billion due to a sequential fall in revenues from Europe (down 1.3%) and the UK (down 2.7%). 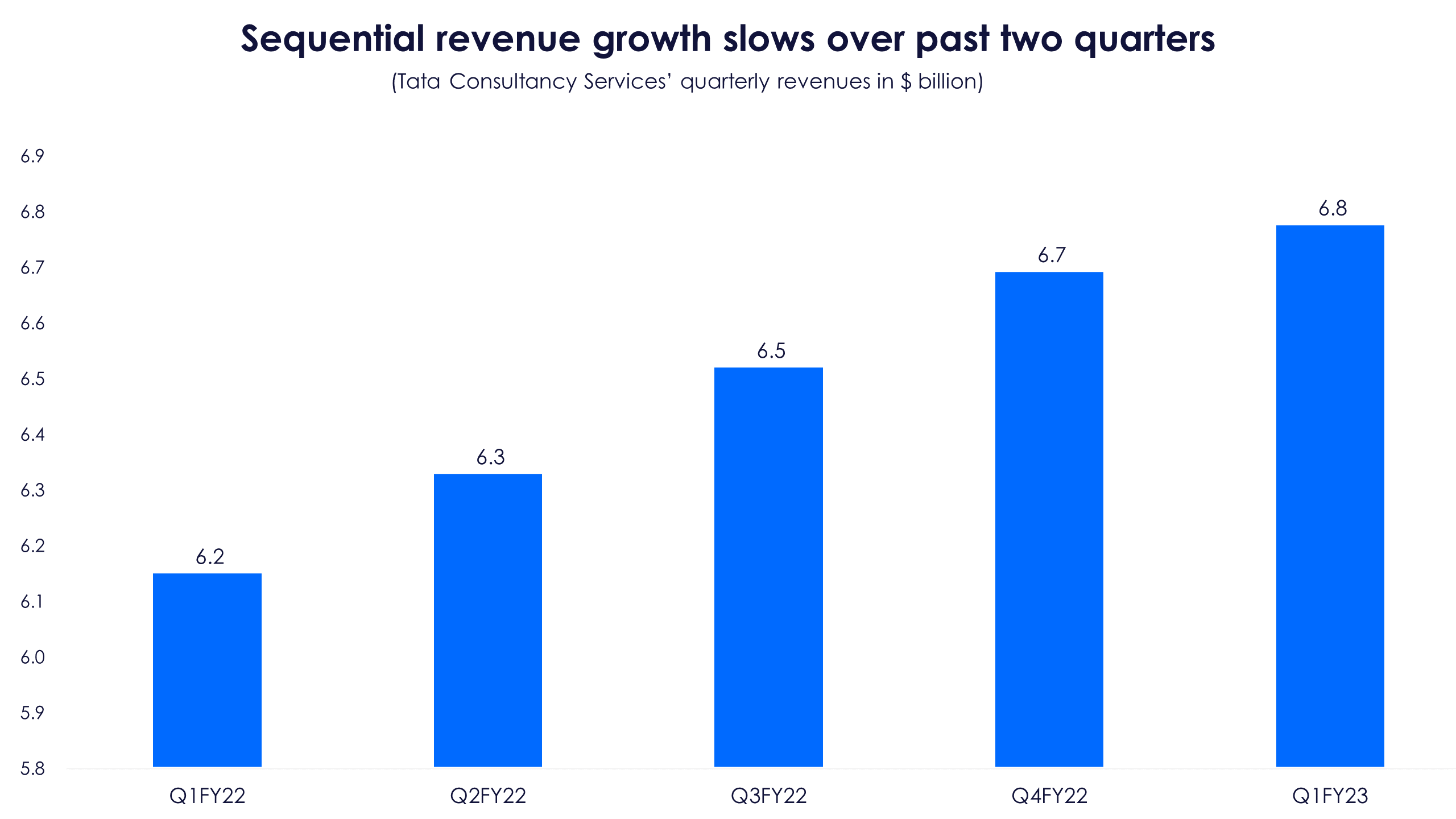 In fact, it was only because of 4.4% QoQ growth in North America revenues to $3.6 billion did the company manage to post sequential revenue growth of any consequence. Although revenues from Latin America grew 7.2% QoQ, the region only contributed $122 million to total revenue in Q1FY23.

One of the primary reasons that Q1FY23 profit was impacted, was a rise in employee costs and subcontractor expenses. Employee and subcontractor expenses as a proportion of revenue from operations in Q1FY23 were 57.5% and 10%, respectively. If we add to this the normalisation of travel expenses during Q1FY23, we get the lowest operating margin in any quarter since Q1FY21, at 23.1%. That’s the first full quarter after the Covid-19 pandemic broke out. 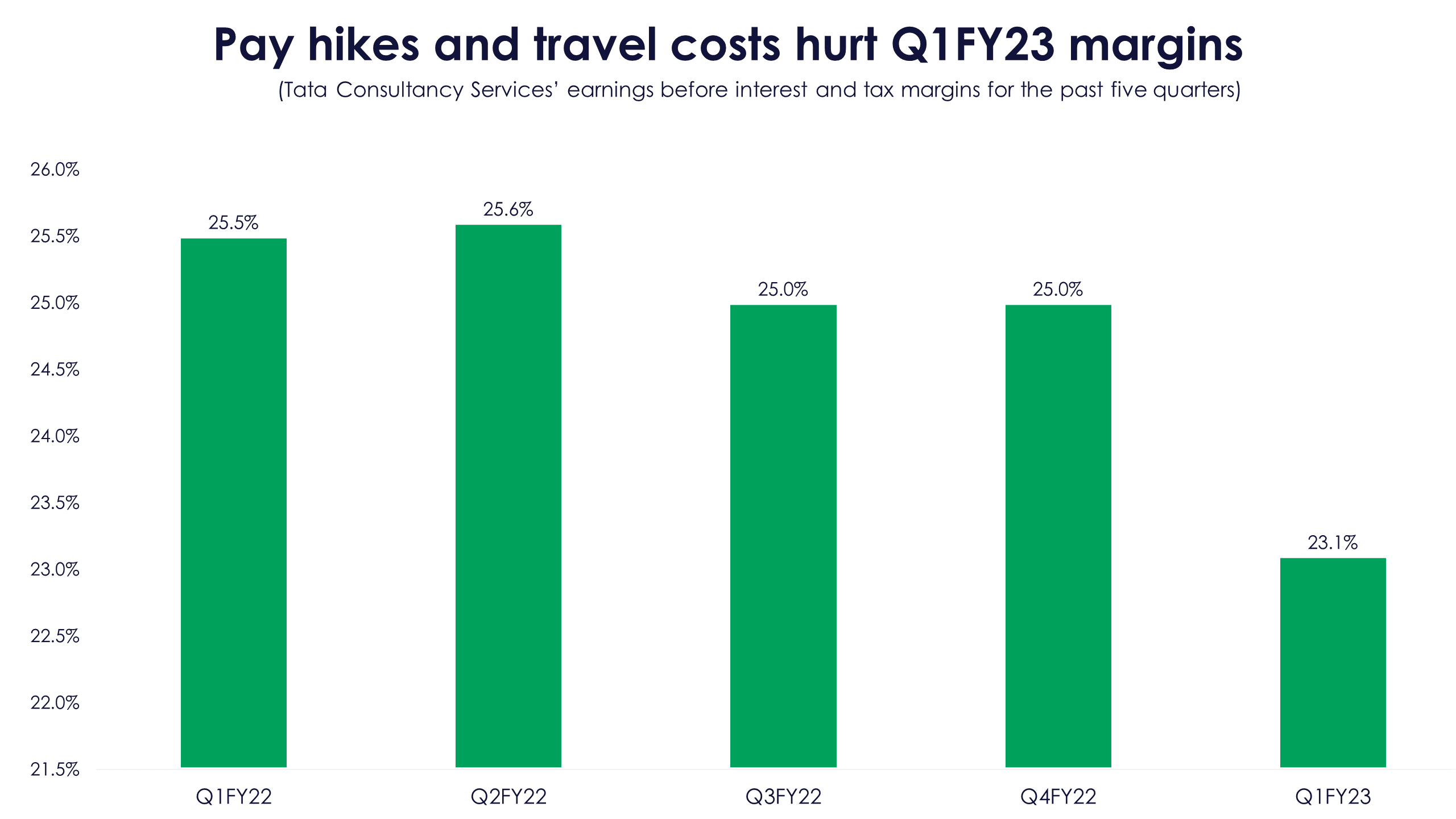 The supply-side pressure on the availability of talent is also weighing on the company’s financial performance. The company’s attrition is nearing 20%, a number never seen by investors in the past decade. 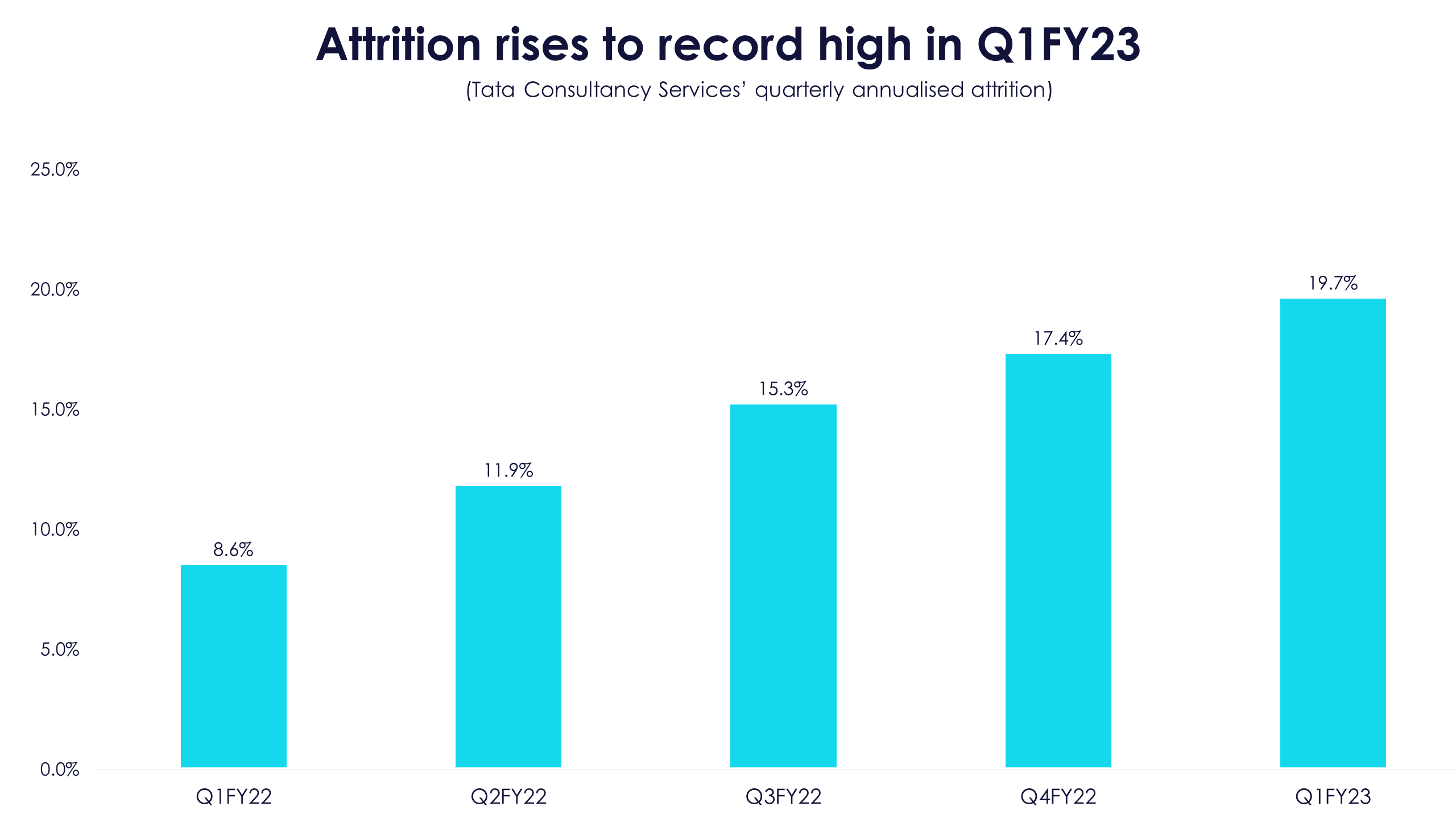 The fact that TCS’ margins are below the industry-leading 25% levels it maintained for the past 8-9 quarters seems to have jolted investors. The management says they are doing all they can to bring the margin back to 25% or above by the end of FY23. But it will be interesting to see whether they can reach their aspirational band of 26%-28% for the year.

The first quarter of every financial year usually sees a large downward impact on tech industry margins, due to pay hikes and seasonally high attrition. The company expects attrition to cool off and margin to increase in H2FY23, which is the usual trend, except for FY22.

Although TCS’ total contract value (TCV) of deal wins were down sequentially and flat on a YoY basis, the deal wins give decent revenue visibility for the rest of the year. In Q4FY22, the company saw one of its highest deal wins, which skews the comparison a bit. The retail vertical saw deals with TCV of $1.2 billion, which is lower than previous quarters but is in its normalised range, according to the management. The company also bagged deals worth $2.6 billion in its banking, financial services, and insurance vertical. 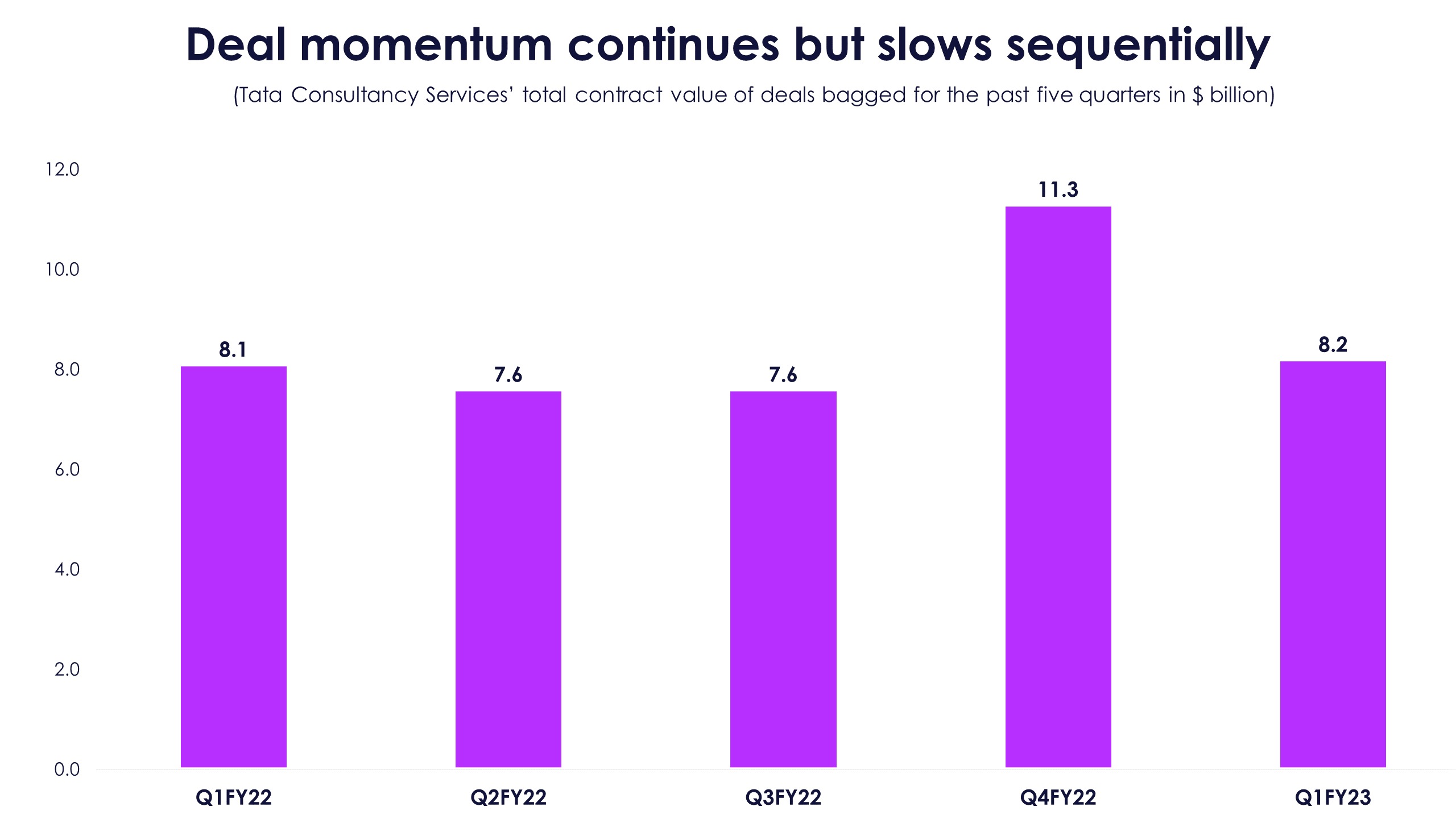 Most verticals except for manufacturing and regional markets saw decent revenue growth in dollar terms. Revenue from regional markets was down 4% as these usually contain projects that don’t have annuity-based revenues. But the sequential slowdown in the manufacturing vertical is a little cause for concern. Revenue here was flat at $671 million.

The TCS management was fairly sanguine about the impact on the company’s business in case of a recession in its major markets. The company is positioned well both in terms of clients and in the markets in which it operates. It hopes to take advantage of a scenario in which technology spends grow in the future or if there is vendor consolidation among clients.

TCS may be a dominant player, but it’s not insulated from the broader climate. The primacy of technology and cloud computing across industries is here to stay. But if there is an economy-wide slowdown, the impact on technology spending by clients is a certainty. The reliance on technology to make businesses relevant to customers across industries isn’t going to change, but in the short-term, if its biggest markets struggle for growth, TCS may see some pain.

This known-unknown risk is something investors will have to grapple with over the next few quarters.