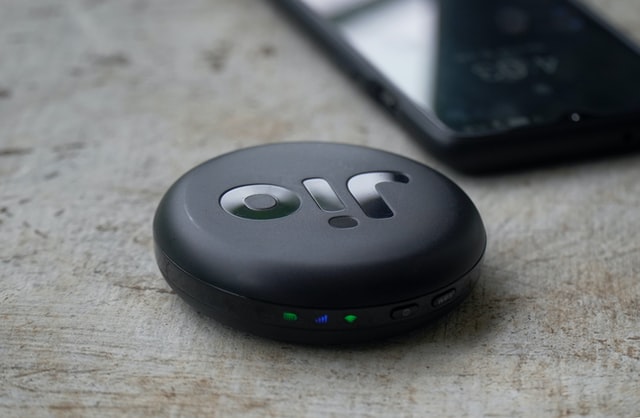 RIL is on an investment spree, as consumer businesses grow at a fair clip

As an investor, Reliance Industries’ stock feels a lot like a complex ETF. The company encompasses a myriad …

As an investor, Reliance Industries’ stock feels a lot like a complex ETF. The company encompasses a myriad of businesses. It’s the primary investment vehicle for its owners, and investors are hoping that all past, current, and future bets pay off. Its Q3FY22 results again show that the Reliance Industries' (RIL) management, more than anything, knows how to build large sprawling businesses.

The company posted a consolidated net profit of over Rs 20,000 crore in Q3FY22 on revenues of 1.91 lakh crore. There was a one-time exceptional gain of Rs 2,836 crore that boosted the company’s profits (on a QoQ and YoY basis). Out of this Rs 20,000 crore profit, only Rs 18,549 crore belongs to RIL’s shareholders because of the stake sales the company did in its digital and retail businesses, and also because of minority stakes held by other investors in many of its investee companies.

Even if we ignore the exceptional gain, RIL had a good quarter because most of its businesses did well during Q3. The retail business especially did well because of almost a full quarter of no restrictions on movement, and a huge boost due to festival season shopping. 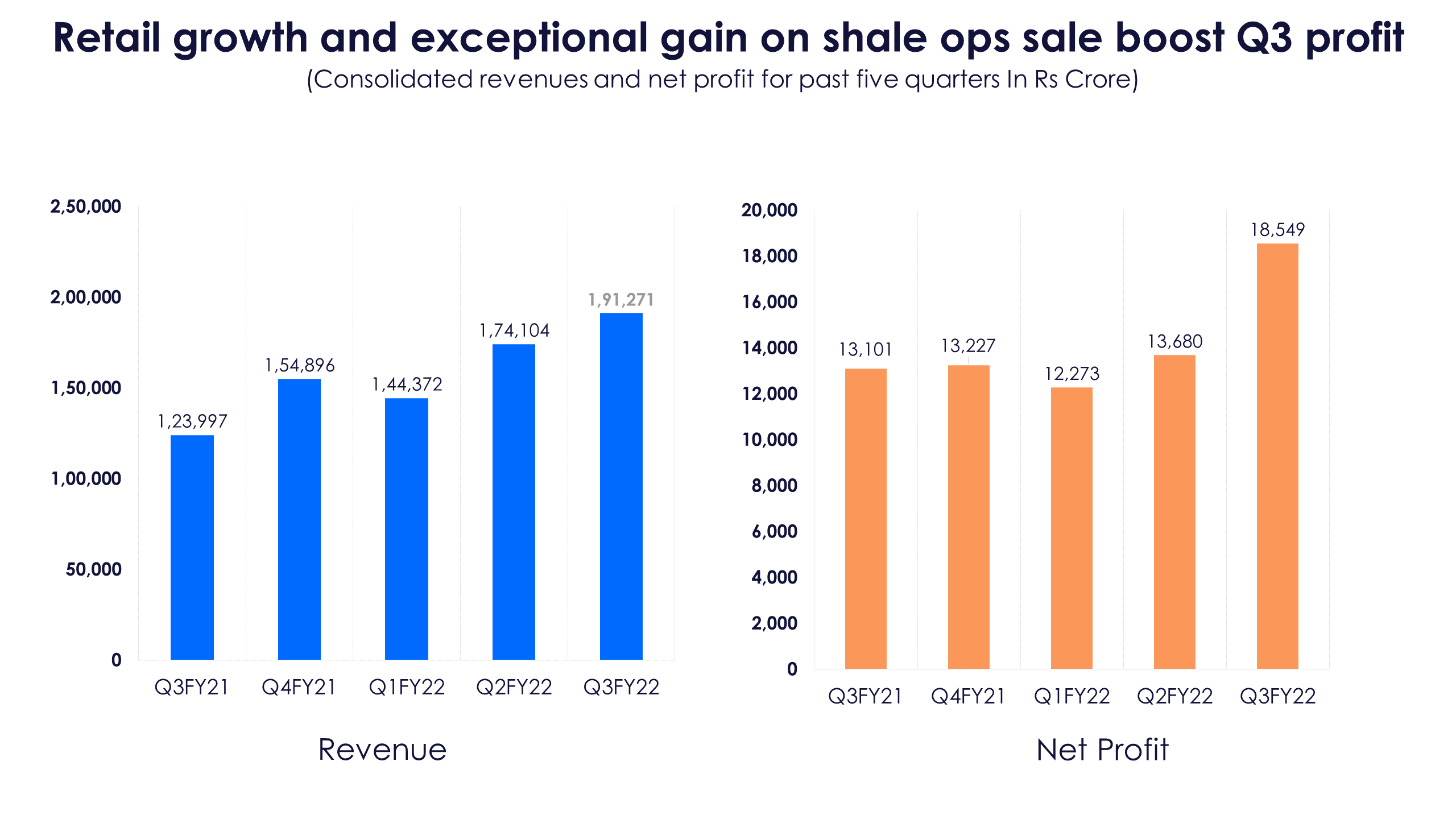 The footfalls at the company’s stores were up to 95% of pre-pandemic levels during Q3FY22, helped in part by the festive season. This led the retail business to post record quarterly revenues in Q3FY22 at Rs 57,717 crore, which helped deliver higher operating leverage leading to a 24% higher EBITDA for the retail business at Rs 3,835 crore. The rise in footfalls led to an all-time high revenue for the grocery business. 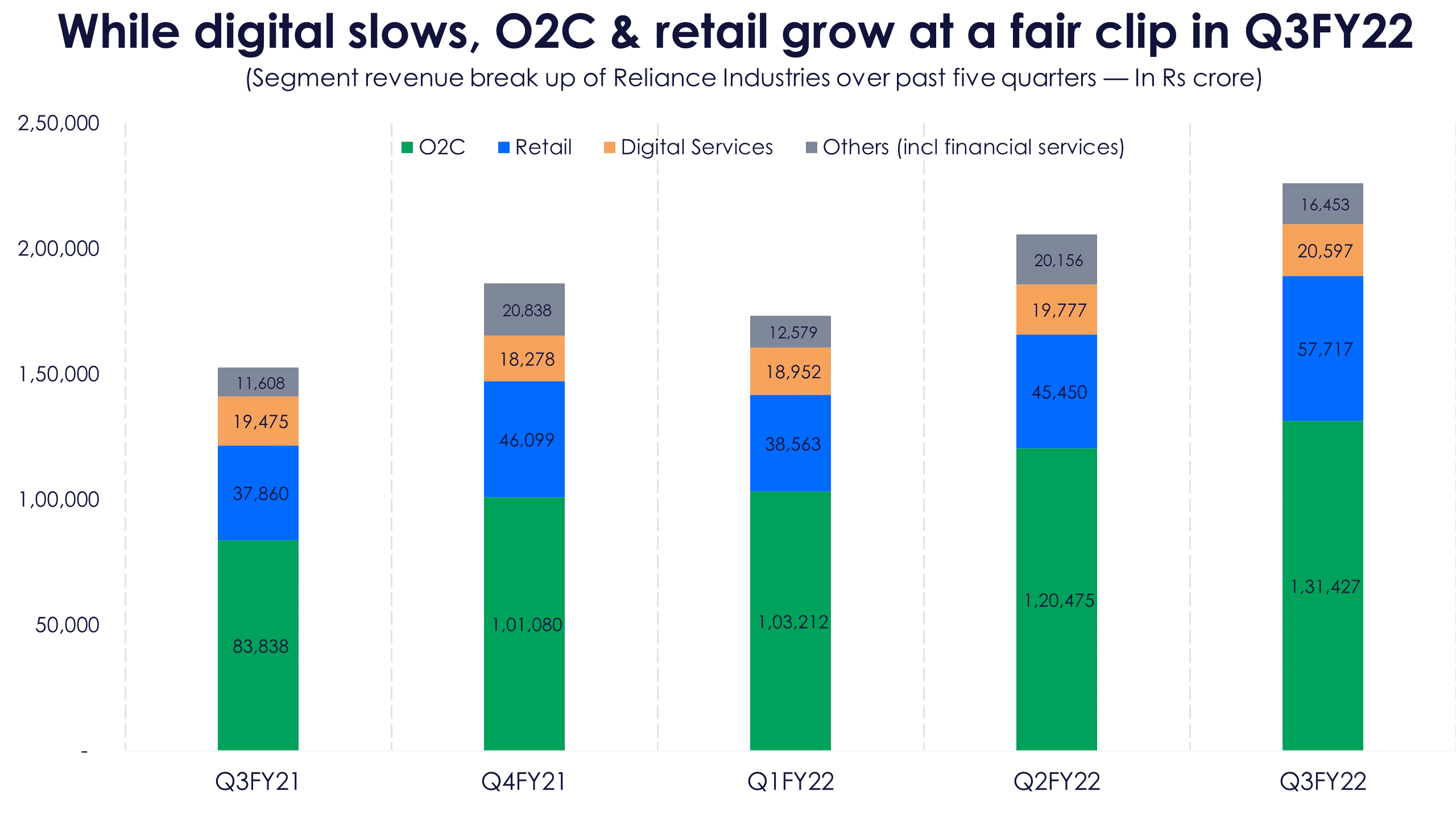 The company’s traditional businesses like O2C saw a sustained recovery helped by fuel margins, but diesel demand is floundering due to high pump prices. However, aviation turbine fuel and petrol are steady as people are traveling more and using their own vehicles, respectively. The company is seeing high margins on fuels, which are at multi-quarter highs.

Then there is the digital services business, one of RIL’s long-term bets. Sequential growth in revenues here seems to have slowed down a bit over the past many quarters. As Reliance Jio makes up more than 90% of revenues of digital services, it appears there is some sluggishness.

What does all this mean for RIL going forward considering its $76-billion foray into clean energy? Before we get into that, let’s understand what happened to its various businesses during Q3FY22. 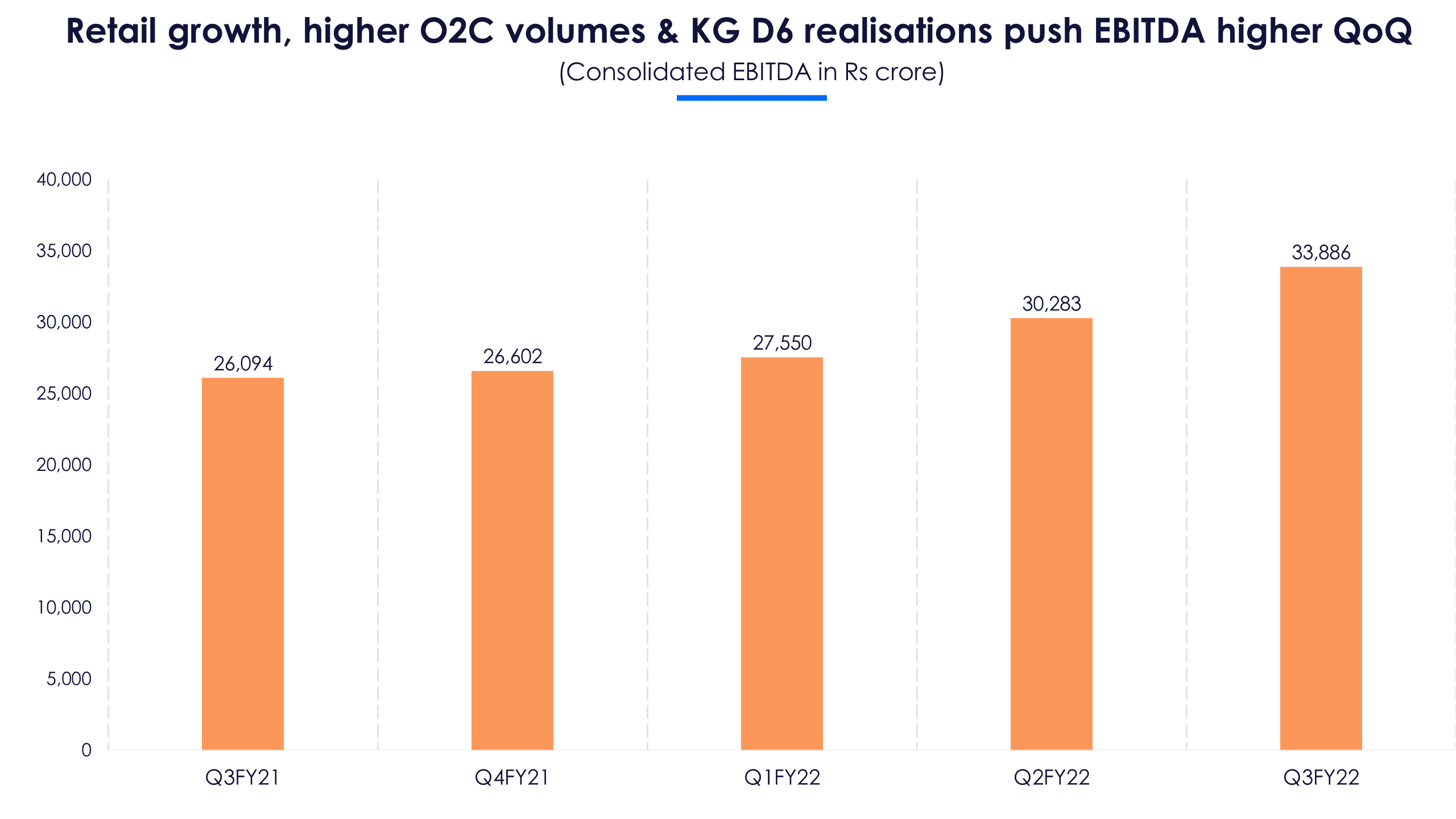 RIL’s digital services businesses, housed under Jio Platforms, posted an EBITDA margin of 50%. Just stay with that number for a moment. Here is a business converting half of its revenues into, effectively, operating margins. The mind boggles as to the absolute EBITDA numbers (in Rs crore) this vertical at RIL can generate if it can truly achieve scale beyond Reliance Jio’s 421 million subscribers earning the company Rs 151.6 in average revenue per user a month. 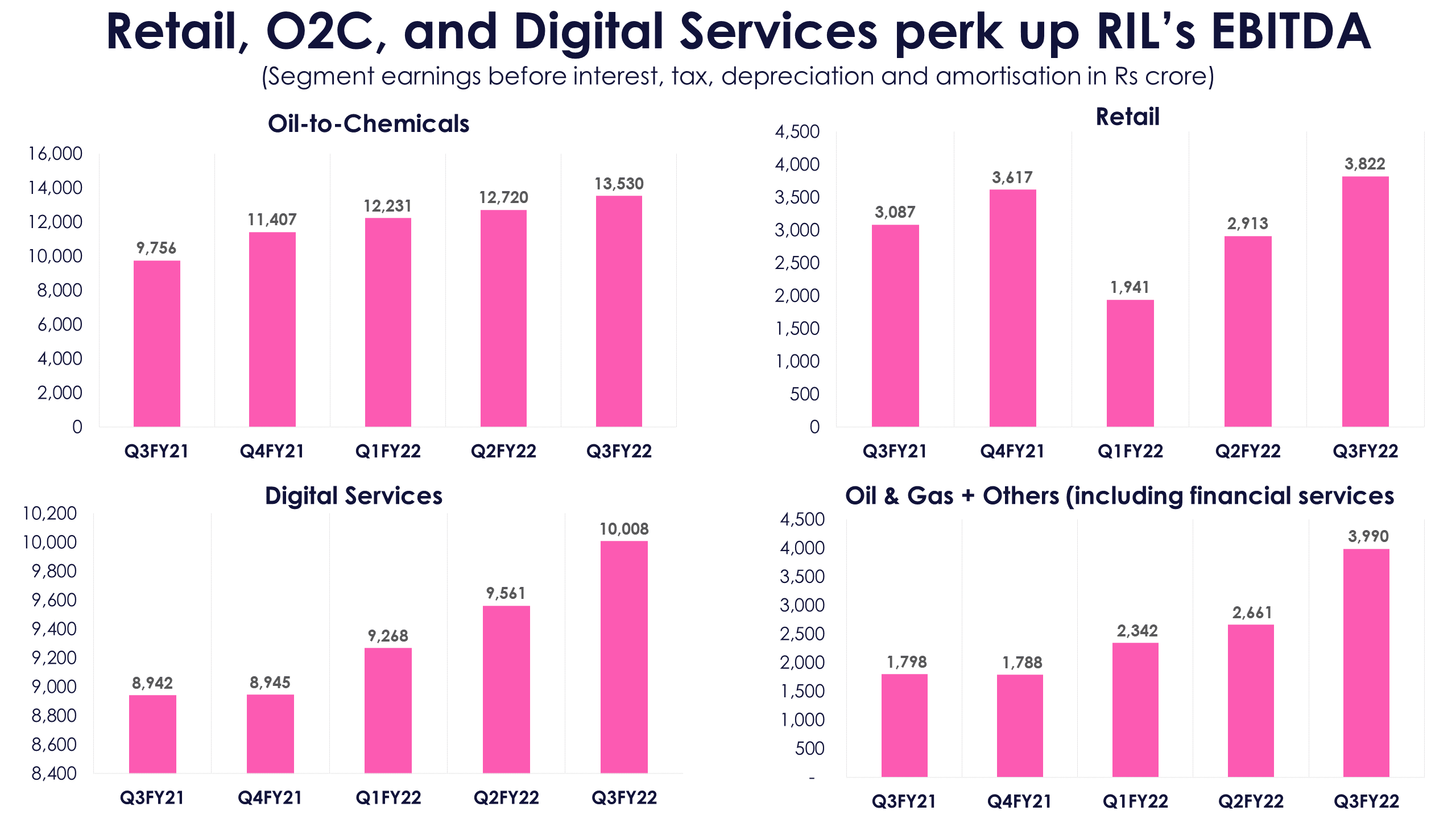 This is where the mildly slowing sequential revenue growth of the digital services should begin to bother investors, not too much, but just a tad. The digital services revenues were just a little below Rs 20,600 crore, with nearly 94% revenues coming from Reliance Jio (nearly 96.6% of EBITDA).

The telecom arm’s revenues are slowly inching towards Rs 20,000 crore, nudged by the 20% tariff hike taken on December 1, 2021. This will add more to the company’s revenues and margins over the next few quarters, but it’s the net loss of 8.5 million subscribers that is a bit concerning.

The company is seeing robust gross additions, but it appears the era of people having multiple, or at least two SIMs (one being Jio), is slowly coming to an end. Now the digital services business’ growth will have to be through higher tariffs and more bundling of services and contents to Reliance Jio’s captive consumer base. The company also prepaid some spectrum-related dues worth Rs 30,791 crore (for spectrum bought before March 2021), which will add Rs 1,200 crore annually to its kitty due to savings on interest.

The company’s oil & gas exploration business did well during the quarter due to a revival in production at KG D6 and also due to higher price realisations. The impending rise in the ceiling price of domestic gas in April will lead to higher EBITDA for this business.

RIL is entering the new energy space with investments in companies in the entire ecosystem. The company originally announced a $10 billion investment back in June 2021 in an effort to turn the conglomerate “carbon neutral” by 2035. As the consensus around climate change builds, a company that counts fossil fuels as its bread and better wants to become carbon neutral.

The company’s renewed push into this space will now entail a $76 billion investment. That’s roughly Rs 5.5 lakh crore. The plan is to set up 100 GW of renewable power projects and green hydrogen networks and set up Giga factories to make solar modules, hydrogen electrolyzers, fuel cells and build a battery grid to store electricity. The company also took a controlling stake in Sterling and Wilson Renewable Energy, an EPC player in the solar energy space, during Q3FY22 after it was given the designation of a promoter.

In all, investors should know that RIL is undertaking another long capex spree, which in this case (for its green energy foray) would extend over 15 years. In case you were one of those who thought that RIL would sit on its haunches after building a telecom giant from scratch over the previous decade, well think again. RIL is in for the long haul to transform its core business to meet its commitment to be net carbon-free in a decade and a half