BSE India
Pursuant to Regulation 39(3) of the Securities and Exchange Board of India (Listing Obligations and Disclosure Requirements) Regulations, 2015 and in terms of SEBI Circular No. SEBI / HO / MIRSD / MIRSD_RTAMB / P / CIR / 2022 / 8 dated January 25, 2022, we enclose the details of 'Letter(s) of Confirmation' issued by the Company to its shareholders, in lieu of share certificate(s) reported as lost by them. Please take the same on record.
Share
Share on

BSE India
Pursuant to Regulation 39(3) of the Securities and Exchange Board of India (Listing Obligations and Disclosure Requirements) Regulations, 2015, we enclose the information regarding loss of share certificate(s) received from the shareholder(s) of the Company on May 19, 2022 and May 20, 2022 aggregating to 2,699 (Two thousand six hundred and ninety nine) shares. As required under SEBI Circular No. SEBI / HO / MIRSD / MIRSD_RTAMB / P / CIR /2022/8 dated January 25, 2022, the Company shall issue 'Letter of Confirmation' to the shareholders after compliance of required formalities. Please take the same on record.
Share
Share on 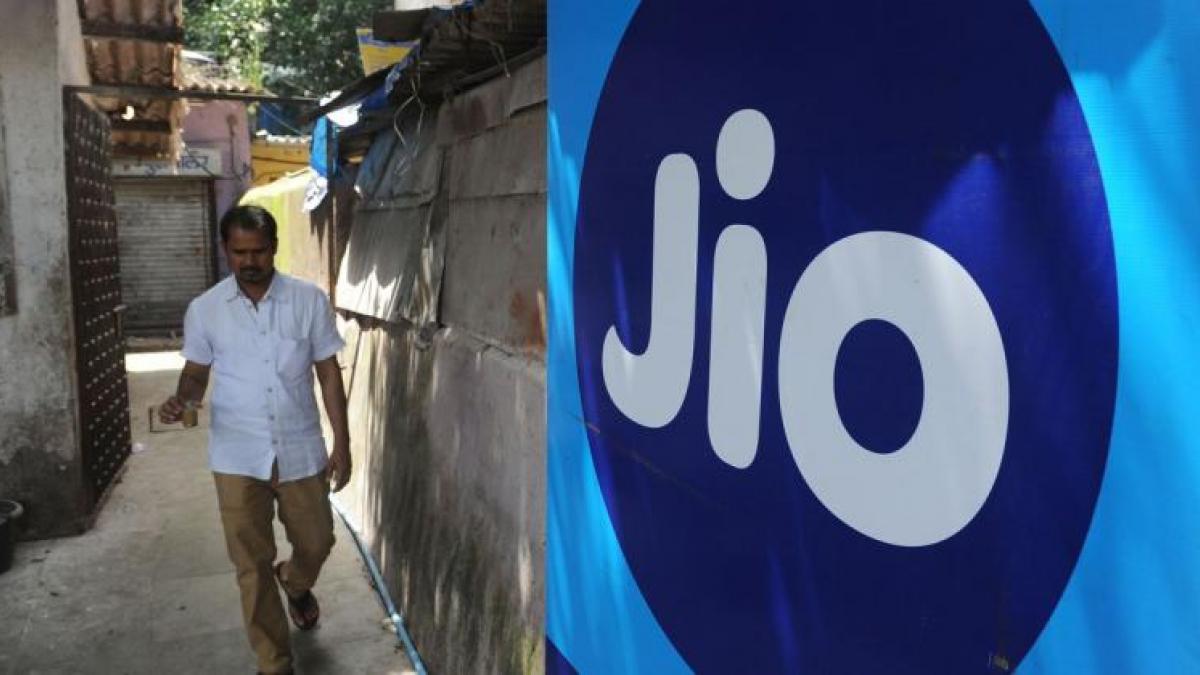 Business Today
The complimentary services include unlimited free calls to any network and data services upto 1.5 gb per day, along with 100 SMS per day for a period of four days.
Share
Share on 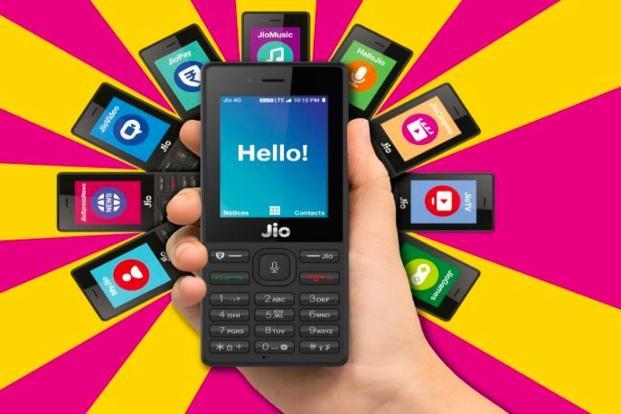 Reliance is generating rich cash flows, but its ambitions mean it will have to spend, spend, spend

Reliance Industries’ consumer businesses, Mukesh Ambani’s ambitious expansion, contributed a whopping Rs 3 lakh crore to the company’s total revenue from operations in FY22 of Rs 7.2 lakh crore. That makes up nearly 42% of its total revenues. Digital services, which include Reliance Jio, are now contributing to one-third of the company’s EBITDA - nearly Rs 11,000 crore.

But the O2C(Oil to Chemicals) business continues to contribute most to the company’s EBITDA at Rs 14,241 crore, at nearly half of the total.

This, among many other reasons, makes RIL’s Q4FY22 results worth another look. Higher inputs costs played spoilsport in Q4FY22, but the company’s profit still grew nearly 28% on a YoY basis to Rs 16,203 crore. 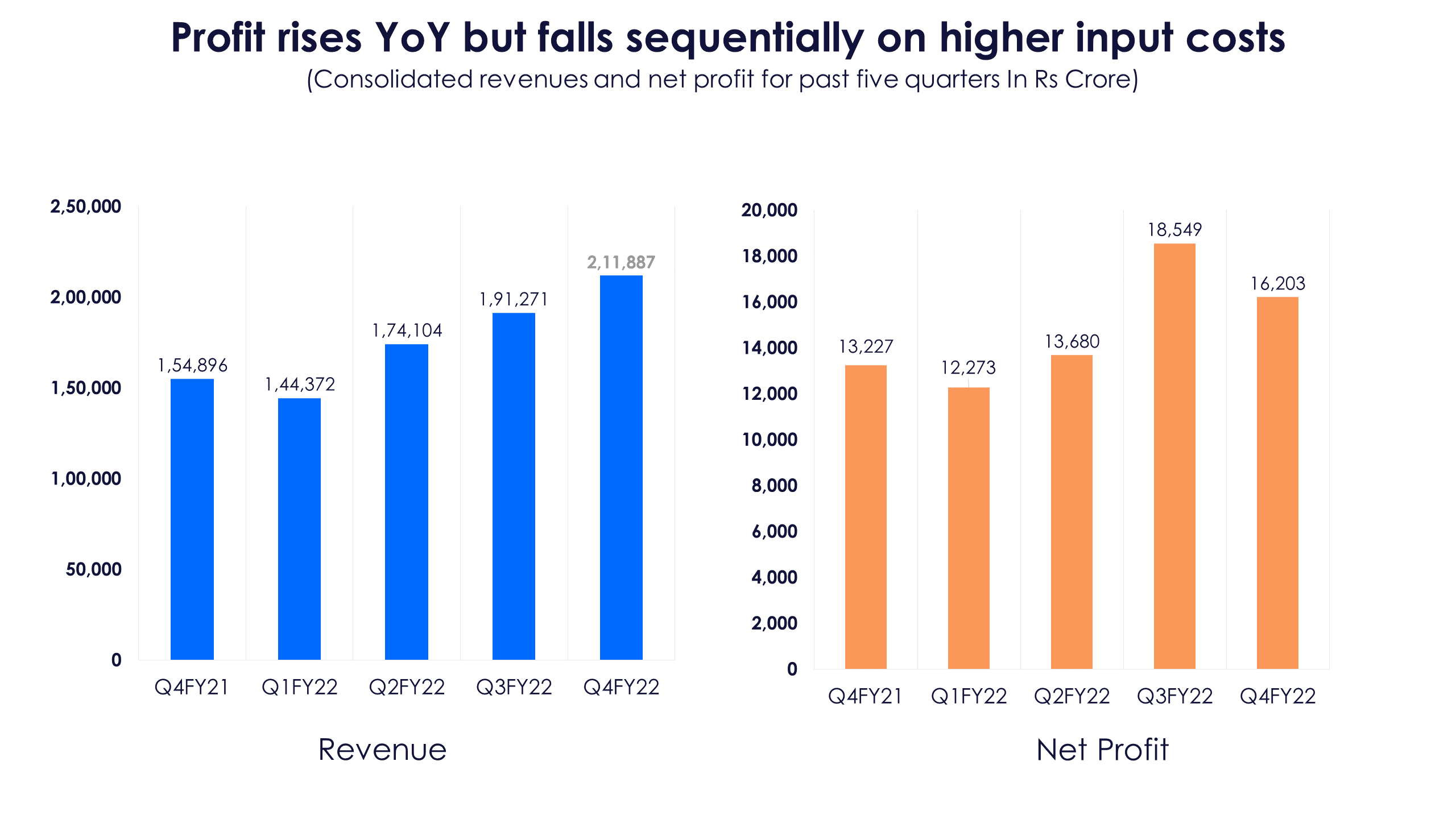 This means that RIL’s various investments in its consumer businesses are now beginning to contribute far more to the bottom line, even though the retail business saw some disruptions in Q4FY22 due to lockdowns across India.

The company posted quarterly revenue from operations of over Rs 2 lakh crore in Q4FY22, but margins did shrink due to cost pressures. Still, where do RIL’s various businesses go from here?

All verticals pull together despite disruptions; Jio gains ground

After falling for two consecutive months, Reliance Jio managed to arrest the decline of mobile subscribers in March 2022, but still ended Q4FY22 with 410.2 million subscribers, down 10.8 million from a quarter ago. The company attributed the fall in subscribers in January and February to the hike in tariffs in December 2021. But this decline stopped in March, which explains the rise in average revenue per user or ARPU to Rs 167.6 in Q4FY22 (vs Rs 152 in Q3FY22).

The company also ended FY22 as the market leader in fibre-to-the-home space with over 5 million homes connected with Jio Fibre. This is within two years of the launch of the service This, coupled with its plans of upselling set-top boxes, and additional content at an additional cost could improve margins further. Jio ended Q4FY22 with EBITDA margins of 50% for two consecutive quarters now.

RIL’s O2C business had a good quarter, despite disruptions in January due to the third Covid-19 wave in India. Demand for auto fuels spiked in February and March as people resumed travel. This also led to a rise in aviation turbine fuel demand as airlines saw robust demand from travellers looking to get out after another bout of lockdowns.  Still, crude oil demand fell by 2 million barrels per day QoQ, according to the company. The opening up of the economy after the third wave also led to a rise in polymer and polyester demand in India.

But higher input costs seem to have hurt consolidated EBITDA on a QoQ basis, although EBITDA is higher in YoY terms. 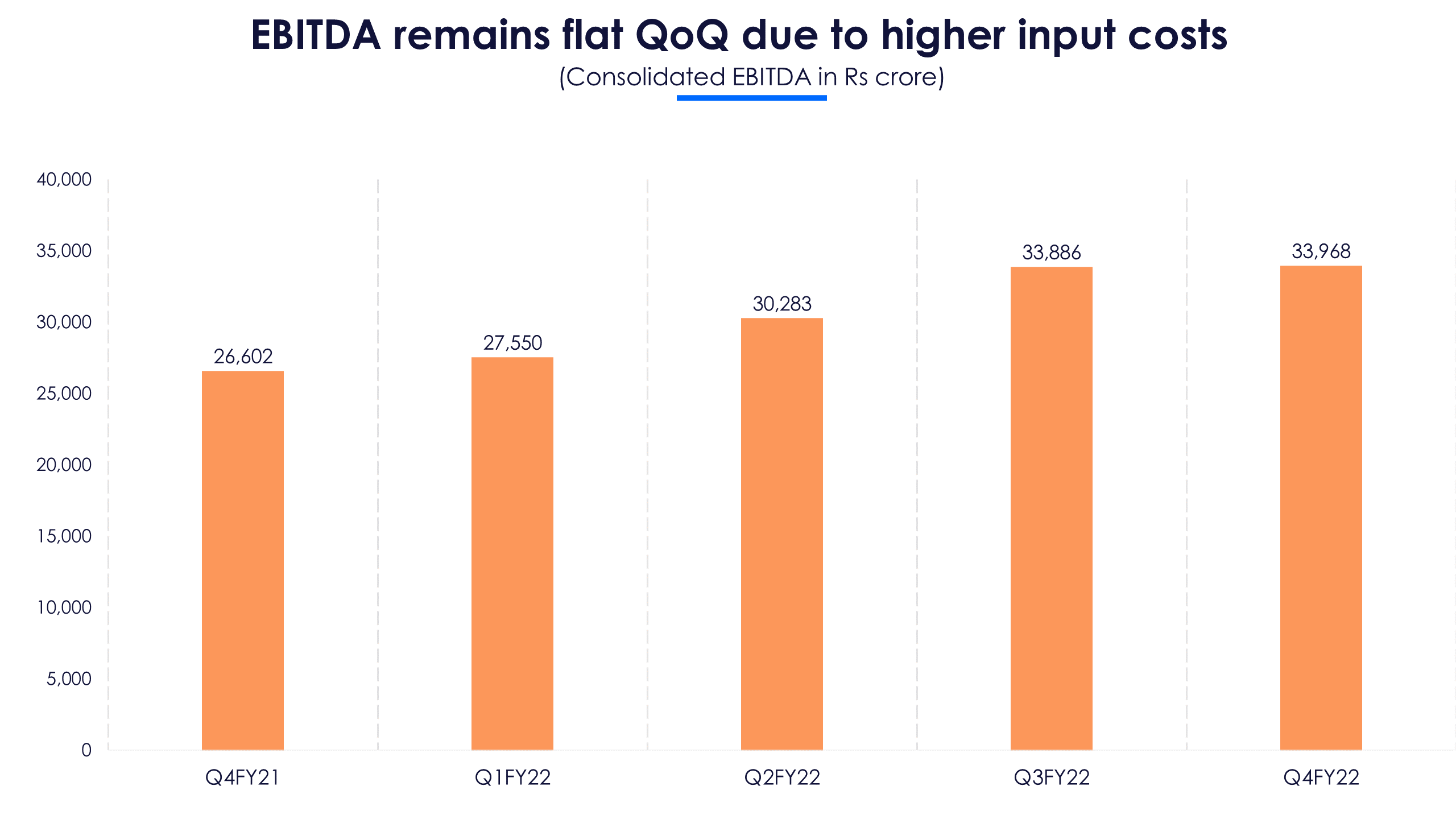 In the face of this, the company’s retail business seems to be growing by leaps and bounds. The retail business’ revenue grew for the third consecutive quarter, and on a YoY basis, Reliance Retail’s revenues jumped nearly 25% to Rs 58,019 crore despite the first month of Q4FY22 being marred with the after-effects of the third pandemic wave.

The demand resurgence as the pandemic receded from February onwards more than made up for the loss of business in January. Still, revenues in Q4FY22 were flat on a QoQ basis. The third wave started in December 2021, so there was a mild effect of the pandemic in Q3FY22 as well on the retail business. 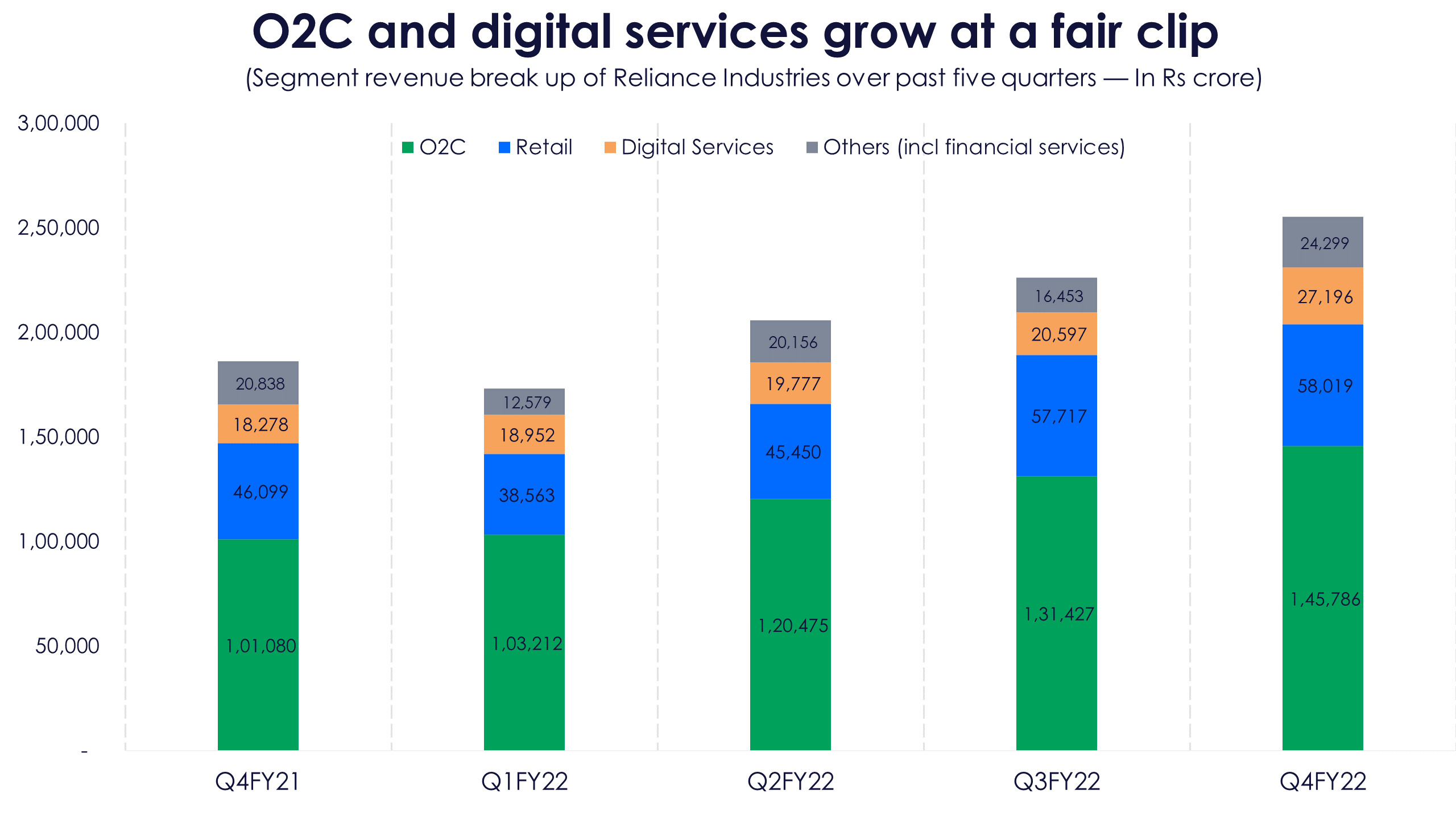 Consumer electronics, fashion and lifestyle, and grocery businesses saw robust growth during Q4FY22, aided by the continued store addition during the period. The business added 793 new stores in Q4FY22, taking its total store count to 15,196 The company says footfalls rose to more than 4% of the pre-Covid period during the quarter.

Whether this demand will sustain well into FY23 is something investors will need to watch going forward.

Investors in RIL have now come to terms with the company’s continuing growth strategy. It’s building of consumer businesses as a whole is helping it generate cash, alongside its cash cow, the O2C segment consisting of refining and petrochemicals. This aids RIL’s capability to move away from fossil fuels long-term, as these businesses mature and start generating enough cash to reinvest.

Jio’s various services, apart from mobile telephony, help many retailers and businesses come online and sell on Reliance’s platforms. Then there is RIL’s own retail business and brands that are being enabled to deliver products to customers on an omnichannel model. The efficient execution of this strategy could pay rich dividends in the future, as is already visible in the surge in RIL’s operating cash flows over the past few years. 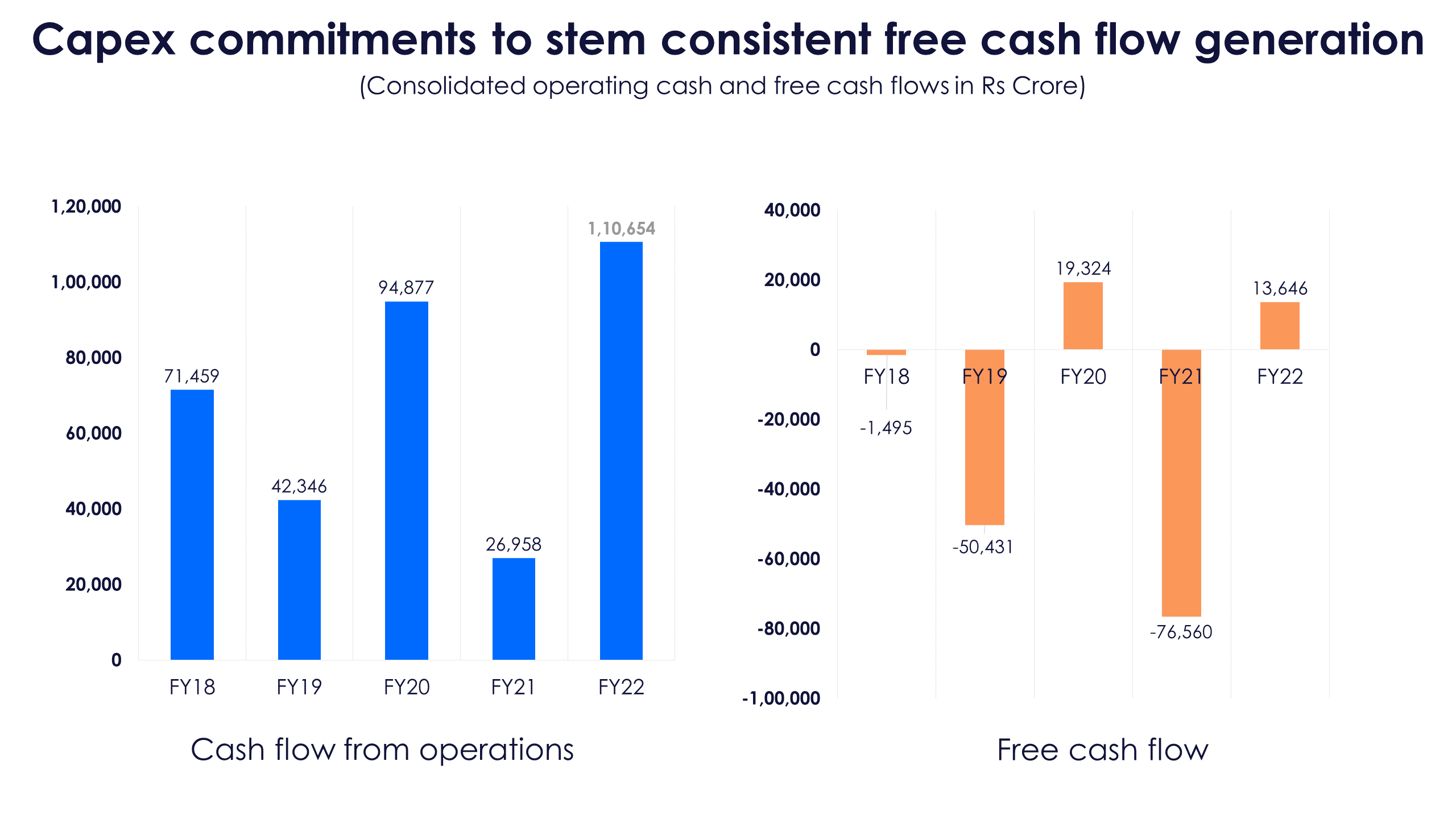 FY21 was a blip in RIL’s free cash flows, but so is FY19. But here is the thing—the tariff hikes announced at the end of FY19 properly kicked in only in FY20. And in the meantime, Reliance was raising funds to fund its future businesses by selling stakes in its retail and digital services businesses.

Operating cash flow in FY22 was over Rs 1 lakh crore. That is a huge number. If this sustains, as we can see in FY22, RIL will be able to generate enough operating cash to fund its own capex. But RIL has to invest heavily through Reliance Jio to upgrade its network to 5G.

Although there are disagreements over the 5G base price for the spectrum that the government will auction, it’s certain that RIL will have to spend to expand 5G coverage. It has also been working on a native 5G tech, and its network, the company says is more amenable to switch to 5G.

Then there is the surge in gas prices which will help production from its gas fields get a good return, as it is clear that the Centre will raise administered gas prices again in October, after a rise in April. This will lead to higher profitability of the exploration business as well, even if it does not contribute much to the revenue pie.

With this context, investors must evaluate whether they want to be along for the ride, at a time Reliance is planning to keep spending big to expand to newer business areas. Business Today
The company said that the 16-tonne, 5-stop elevator has a floor space of 25.78 sq. metres and can carry more than 200 people at one go.
Share
Share on

Business Standard
In final bids for Boots, billionaires, and owner of UK's retail ASDA Group, Issa Brothers, are in the race with TDR Capital, a British private equity firm, and will be the front-runners.
Share
Share on

BSE India
Pursuant to Regulation 39(3) of the Securities and Exchange Board of India (Listing Obligations and Disclosure Requirements) Regulations, 2015, we enclose the information regarding loss of share certificate(s) for 1147 (One thousand one hundred and forty seven) shares received from the shareholder(s) of the Company on May 16, 2022. As required under SEBI Circular No. SEBI / HO / MIRSD / MIRSD_RTAMB / P / CIR /2022/8 dated January 25, 2022, the Company shall issue 'Letter of Confirmation' to the shareholders after compliance of required formalities. Please take the same on record.
Share
Share on

BSE India
We refer to Regulation 5 of the SEBl (Prohibition of Insider Trading) Regulations, 2015 and notify the enclosed trading plan for pledging of equity shares of the Company, formulated by Shri Harish D Shah, President - Planning and Strategy, of the Company. We request you to take the same on record and disseminate on your website.
Share
Share on 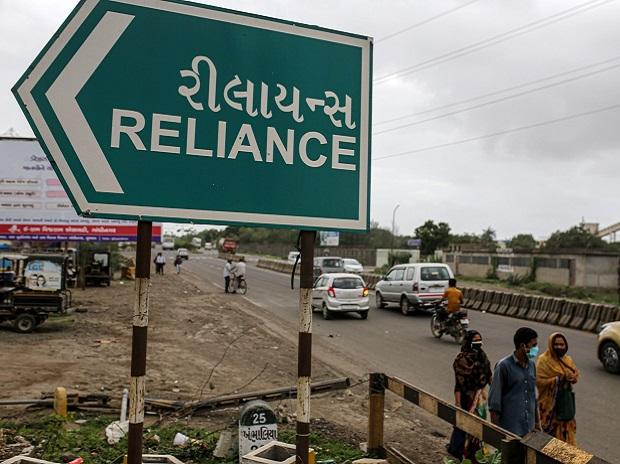