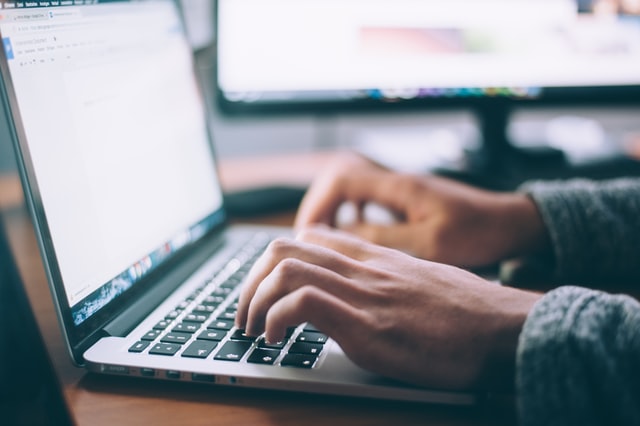 The boom continues: Largecap IT services companies primed to deliver a stellar FY22

In a quarter that is considered seasonally weak for Indian IT services companies due to furloughs and employees’ being on holidays, most of them have come out all guns blazing in …

In a quarter that is considered seasonally weak for Indian IT services companies due to furloughs and employees’ being on holidays, most of them have come out all guns blazing in Q3FY22. HCL Technologies and Infosys posted rapid sequential revenue growth in Q3, while Tata Consultancy Services and Wipro’s revenue growth slowed a bit during the quarter. 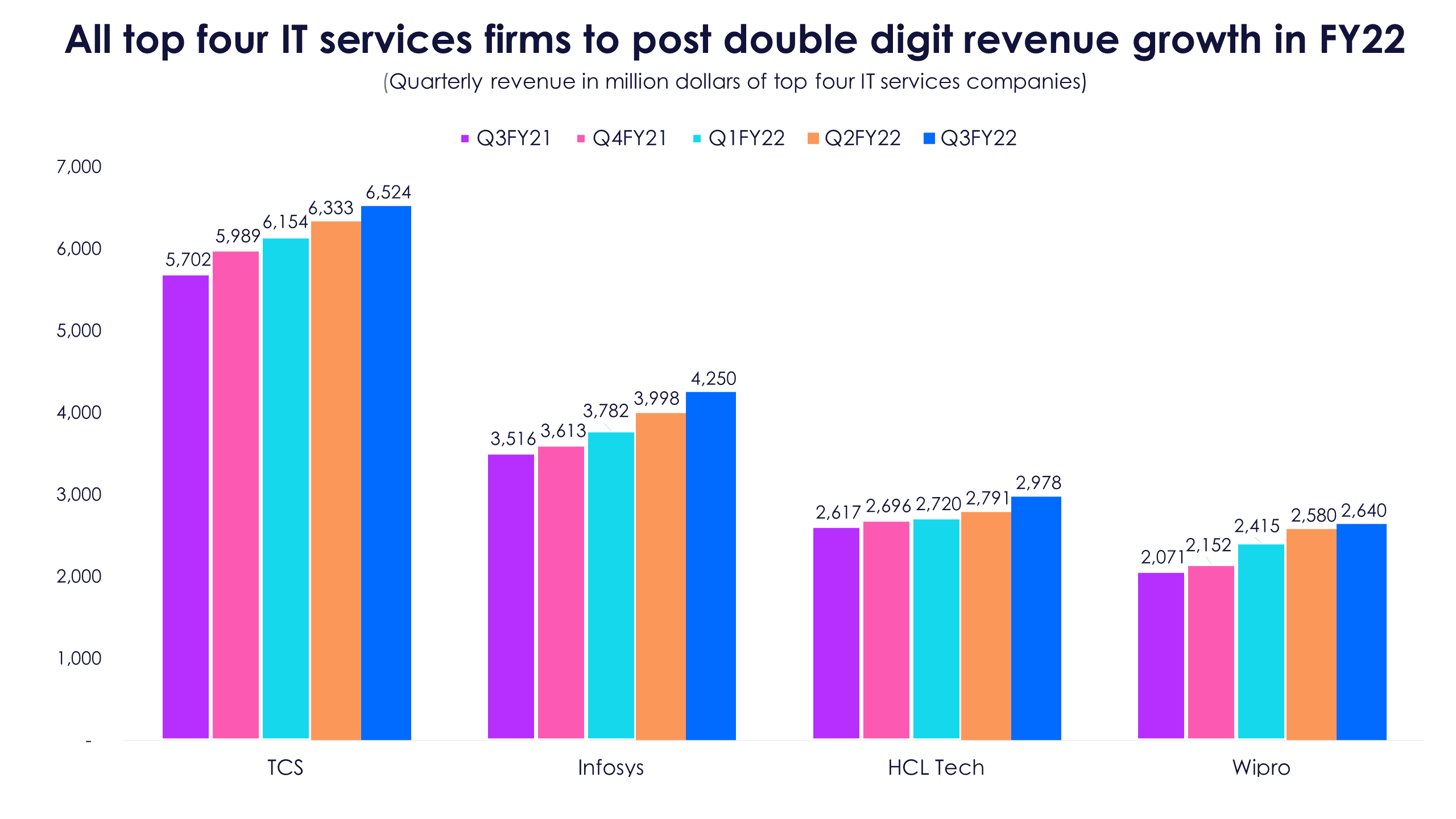 Similarly, Wipro posted over 25% YoY dollar revenue growth in the past three consecutive quarters, which suggests that even if the company meets the mid-point of its $2.69 billion-$2.75 billion revenue guidance for Q4FY22, it would easily post a fourth consecutive quarter of over 25% dollar revenue growth. Consequently, despite paring some of its gains ahead of its results announcement, Wipro might be able to deliver better returns for investors going forward.

Interestingly, TCS and HCL Tech are making contrasting choices in pricing. TCS is happy protecting its industry-leading margins among Indian companies, while HCL Tech is ready to sacrifice some of its margins today to help the company win more customers.

How will this pan out going forward? Before that, let us take a look at some of the key numbers from Q3FY22 for these companies.

One of the all-pervasive narratives in the IT services industry is high attrition. While this is a direct result of the high demand for IT services from across various industries, companies are having to increase their fresher intake to adjust their cost pyramid. This chart shows that none of the top four IT services companies are immune to higher attrition of employees. 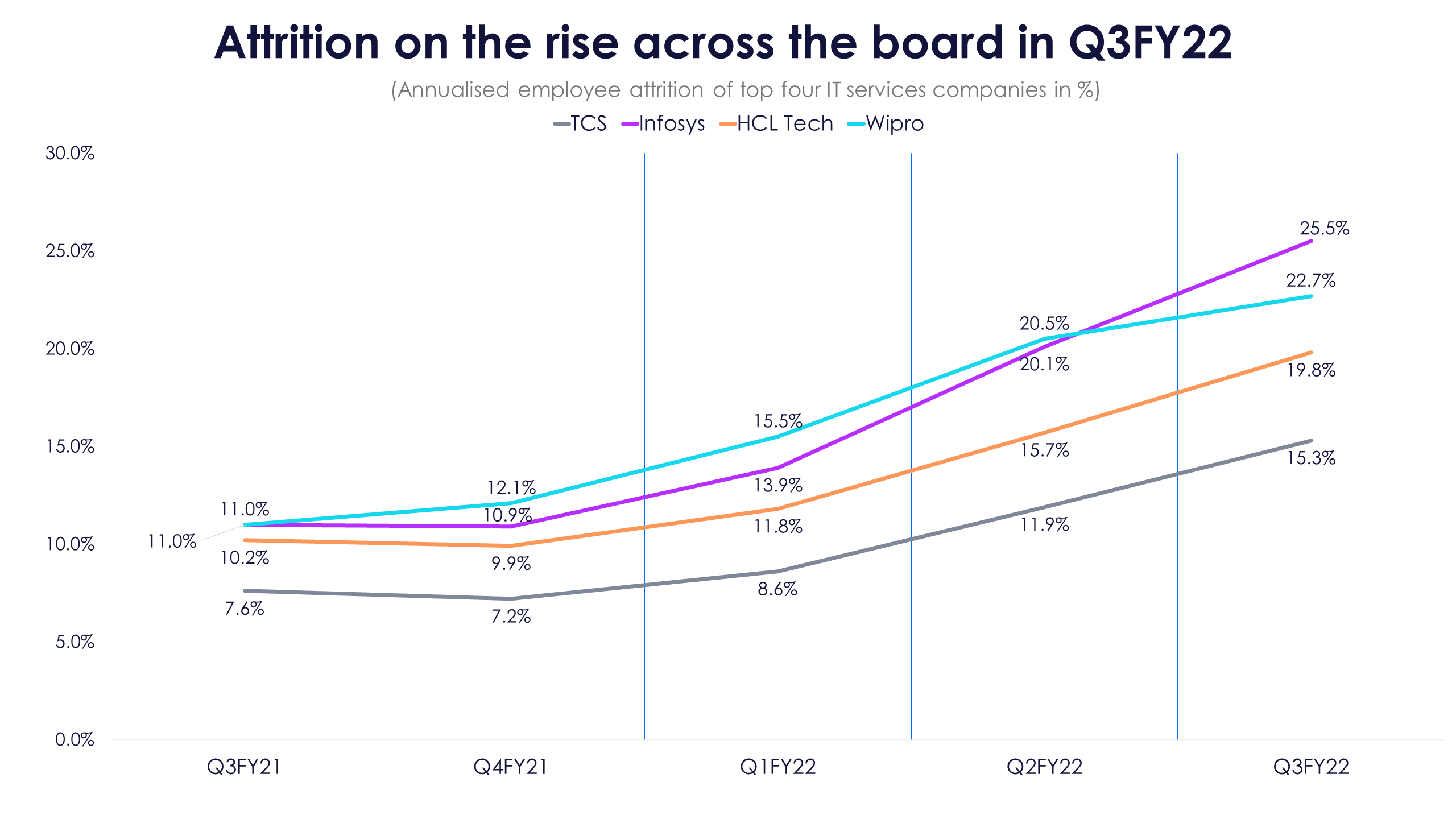 While there is anecdotal evidence about how some employee or the other was hired at a higher cost to the company in the past few months, one thing is for certain, this is hitting margins of HCL Tech, TCS, Infosys, and Wipro. While Infosys and TCS are able to defend their superior operating margins and limit the impact of higher employee compensation costs, Wipro and HCL Tech seem to be struggling to maintain their margins. 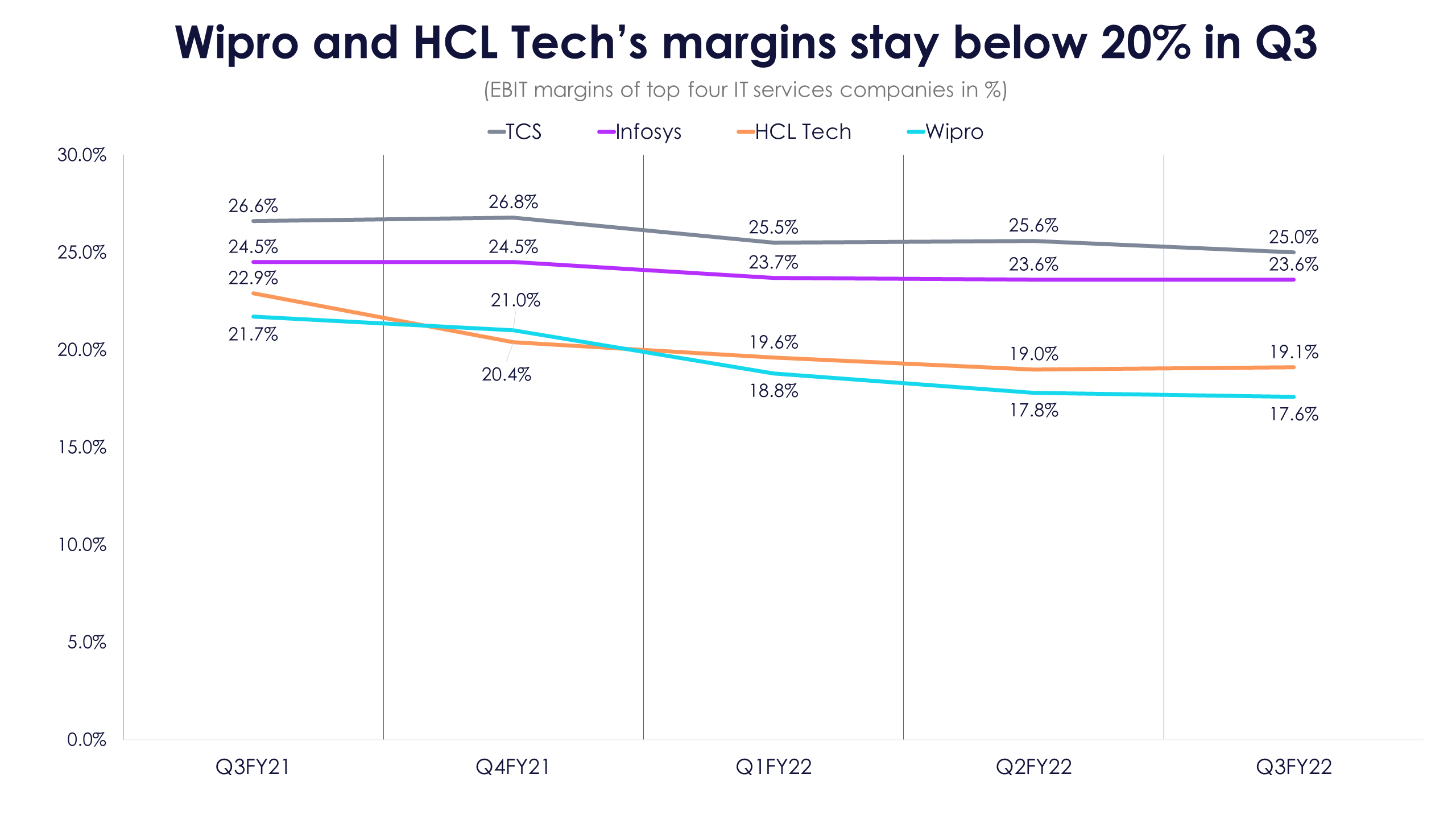 Employee costs make up the bulk of the operating costs of an IT services company (more than 50%). In such a scenario, a spike in attrition, and management efforts to retain employees through high compensation and bonuses will impact operating margins. IT services companies use sub-contractors to manage the demand for talent in case of a spike in attrition. TCS’ employee costs have stayed above 55% of revenues for three consecutive quarters now, and this coincided with a rise in attrition and sub-contractor costs during the same period. 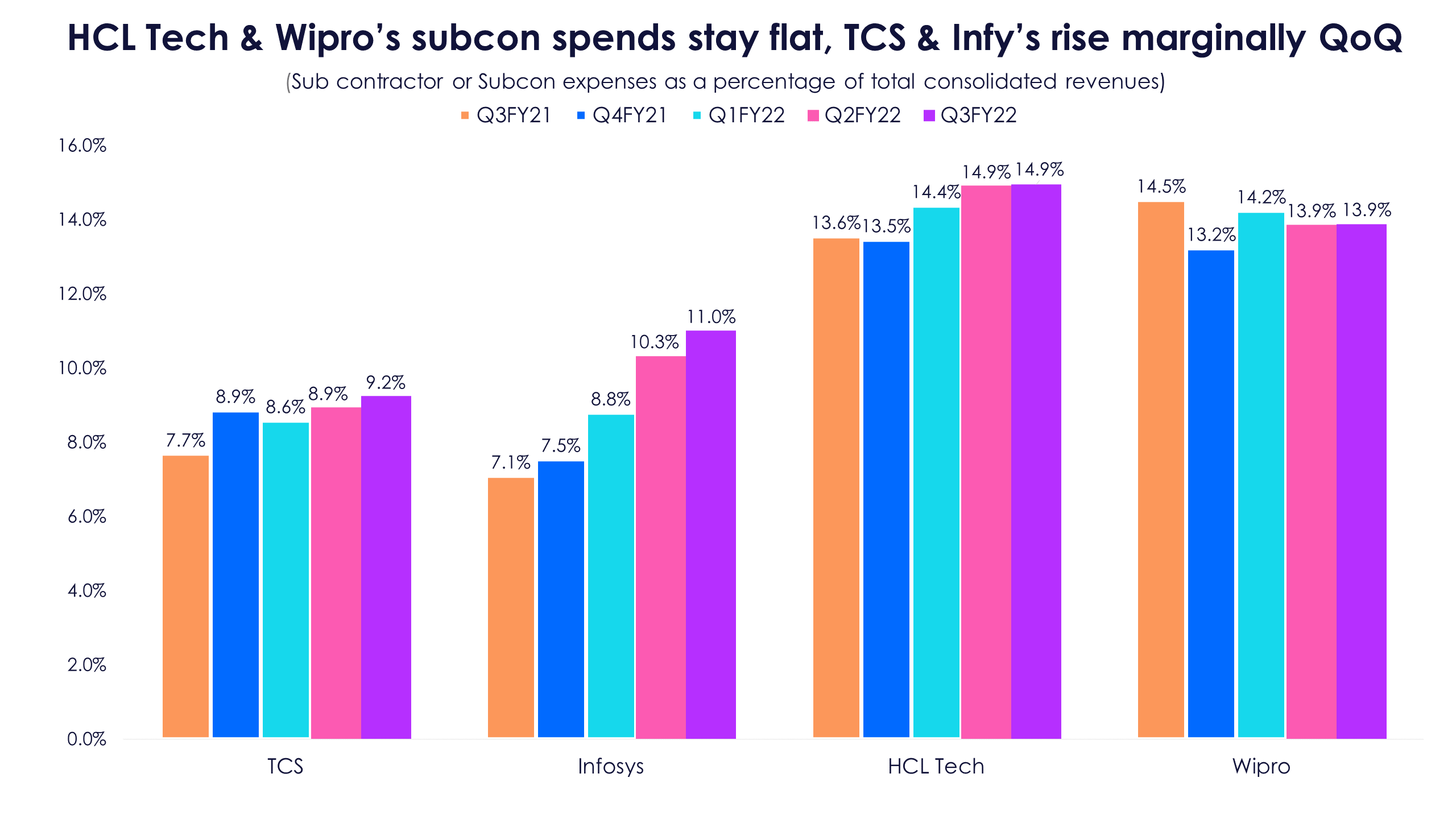 All four large IT services companies are now focusing on hiring freshers to optimize their cost structure. HCL Tech plans to double fresher hiring in FY23 (at 40,000), TCS hired 77,000 freshers and plans to hire more in Q4. TCS increased the frequency of the national qualifier test to keep pace with its hiring volume. Wipro hired 70% more freshers in FY22 till Q3 than in FY21.

Is this growth sustainable?

All four companies are seeing sustained growth every quarter in the BFSI vertical, which shows that companies are investing heavily to upgrade their business capabilities to be digitally native. In the retail vertical, although there is sustained sequential growth in revenues, only Infosys, TCS, and Wipro saw revenues grow for five consecutive quarters.

TCS is seeing some sluggishness in revenue growth in the UK, while Wipro is witnessing the same in Europe. But the trend is clear, upgrading and migration to cloud servers are driving revenue growth. Another thing investors should keep in mind is that deals are becoming smaller in size, which has led to a lower value of deals being won in Q3FY22. This is the reason we are not calling out this amount specifically.

The deals are now in the range of $100-$300 million, and of shorter tenure. This means these companies will have to invest more in future sales and marketing expenses to win deals. But overall, the deal pipeline looks robust for HCL Tech, Infosys, Wipro, and TCS. This will sustain revenue growth going forward into FY22.

Investors need to keep in mind the increased competitive intensity in the IT services business, and hence high margins through price hikes will not be a certainty. It will be more due to higher operating leverage rather than frequent pass-through of higher costs to customers. Managements of these companies are focused on sustained revenue growth delivering superior margins, rather than price hikes.

Consequently, margins will not sustain at such elevated levels. Well, unless the company is called TCS, which insists on growing profitably and not merely through price competition