Buoyed by industry consolidation, record polyvinyl chloride (PVC) and steel prices along with robust domestic demand, top listed PVC pipe and structural steel tube players delivered a stellar return of 91% on an average in the past year. While …

Buoyed by industry consolidation, record polyvinyl chloride (PVC) and steel prices along with robust domestic demand, top listed PVC pipe and structural steel tube players delivered a stellar return of 91% on an average in the past year. While Investors are enthused with their wealth doubling, they must be wondering whether there is any steam left in these stocks.

Although the management of Astral and Prince Pipes & Fittings confirmed the uptrend in PVC prices in their Q2 earningscall, prices actually corrected from their highs in the second half of November 2021. However, the demand outlook is particularly bright for this industry. ICICI Securities expects real estate developers to clock strong sales bookings in Q3FY22 and launch new projects in Q4FY22. This is sure to give a fillip to the plastic pipes sector. Accordingly, the plastic pipe players are ready with their capex plans for the next 18-24 months.

India’s structural steel market will grow 5X over the next decade to 22 million tonnes per annum. According to channel checks andAPL Apollo Tubes’ management, medium-term demand for the company’s products looks robust.  Cost effectiveness and convenience in using structural steel give it a clear edge over construction materials like wood, aluminium and reinforced cement concrete.

Finolex Industries is the only pipe player which is backward integrated. This means that it also manufactures the raw material i.e. PVC resin which is utilised for manufacturing plastic pipes. The company was the primary beneficiary of a close to 70% rise in PVC resin prices to Rs 140/kg levels in the last one year backed by global supply side constraints. The company sells around 30-40% of its PVC resins production in the open market. Understandably, its Q2 revenues jumped 85% YoY to Rs 1,083 crore led by higher realizations, especially in the resins segment. 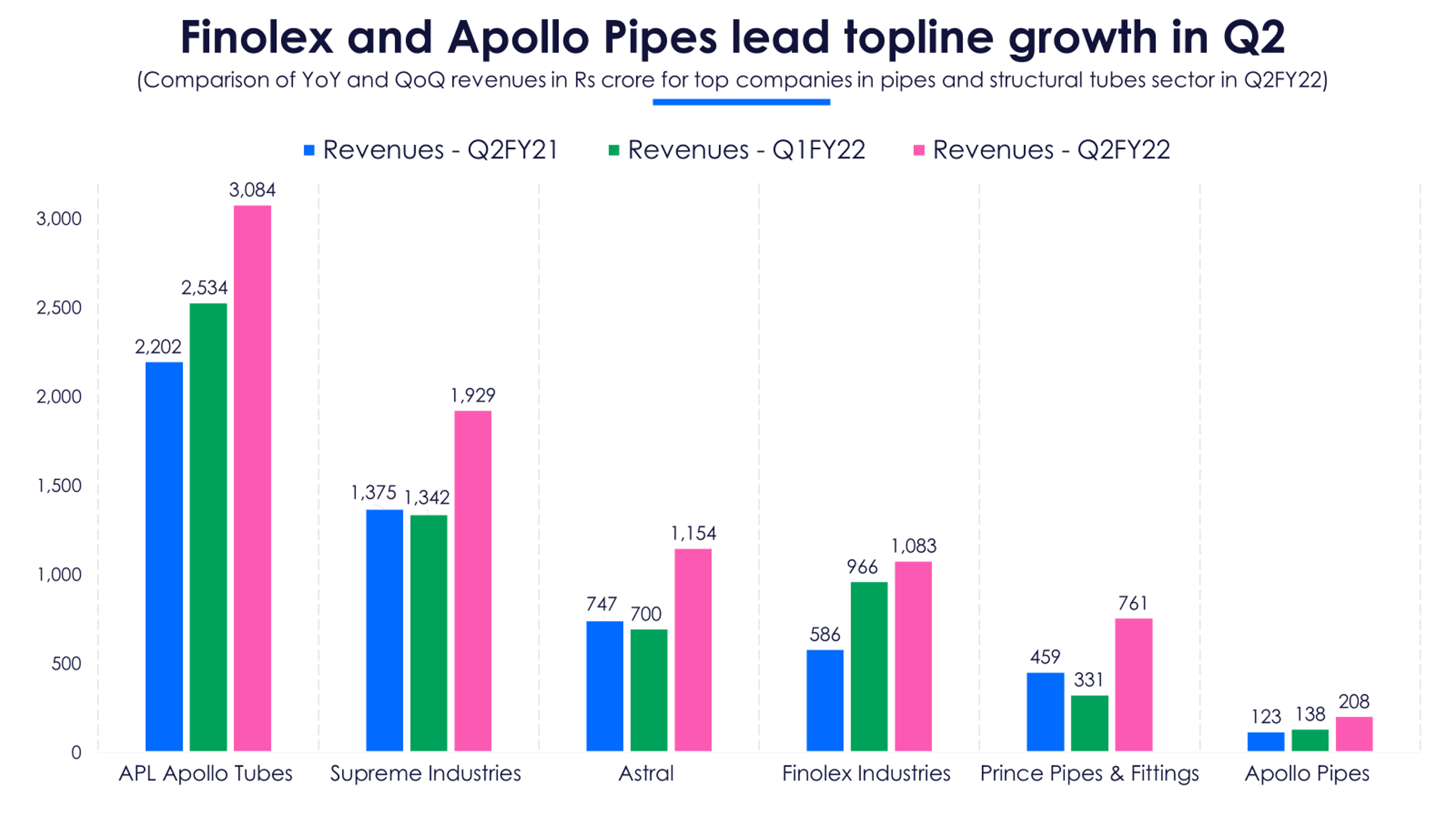 Players like Astral, Prince Pipes and Finolex posted over 20% volume growth in Q2 backed by strong demand from the plumbing and sewerage segments. Narrowing price gaps between chlorinated polyvinyl chloride (CPVC) and normal PVC pipes led to a high demand for the former which primarily benefited Astral. The company derives nearly 55% of its sales from CPVC pipes, which are mainly used in residential properties. 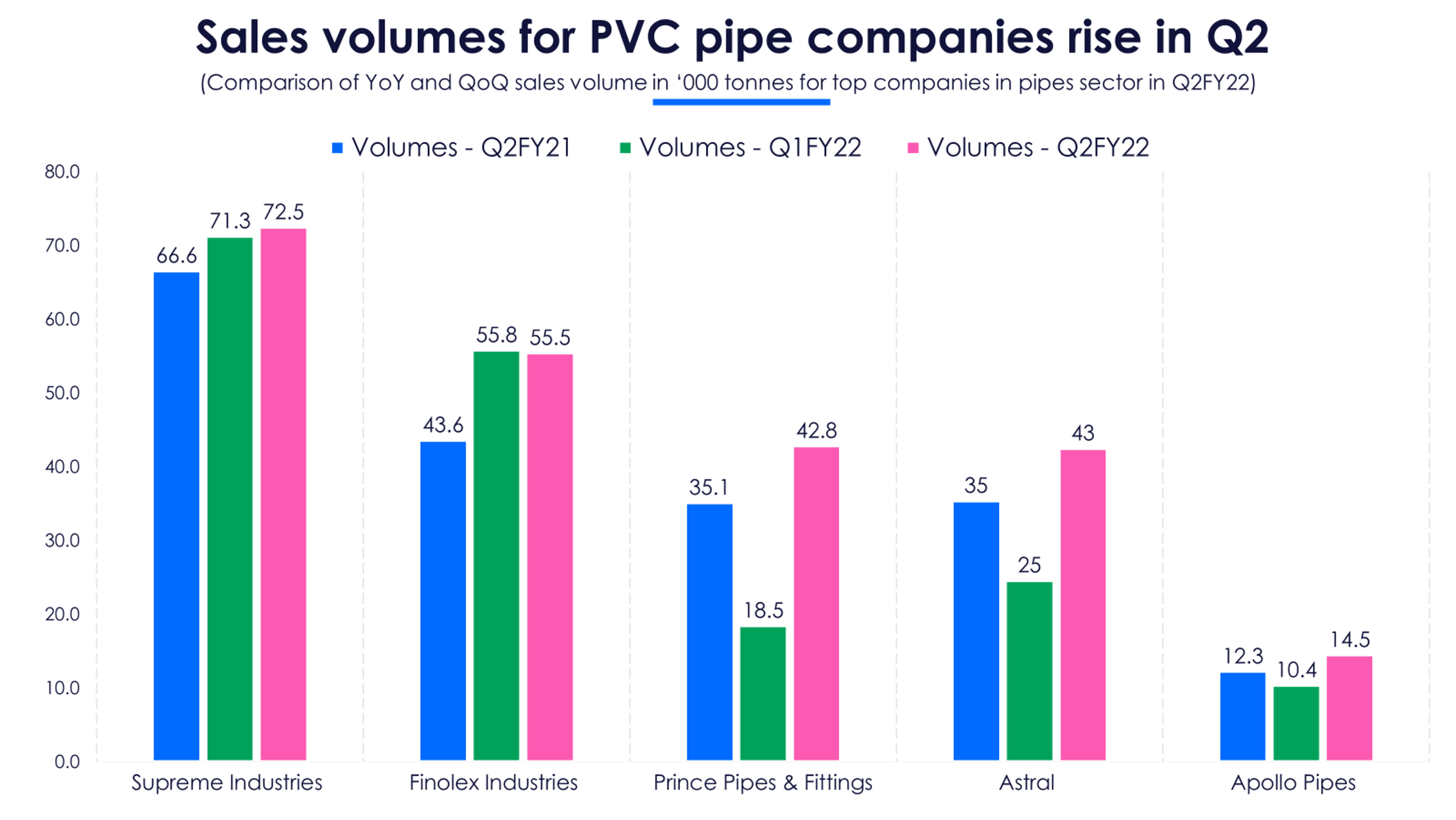 A spike in PVC prices by Rs 34/kg in Q2 led to higher realisations for plastic pipe players. According to market leader Supreme Industries, 55% of the domestic PVC resins requirement is imported. While there was robust demand for pipes in H1FY22, raw material shortage and an eventual jump in prices of PVC resins plagued unorganised players. In such a situation, organised PVC pipe manufacturers gained market share and improved their realisations. Notably, any increase in input cost is passed on to the end consumers with a lag of two weeks in this industry. 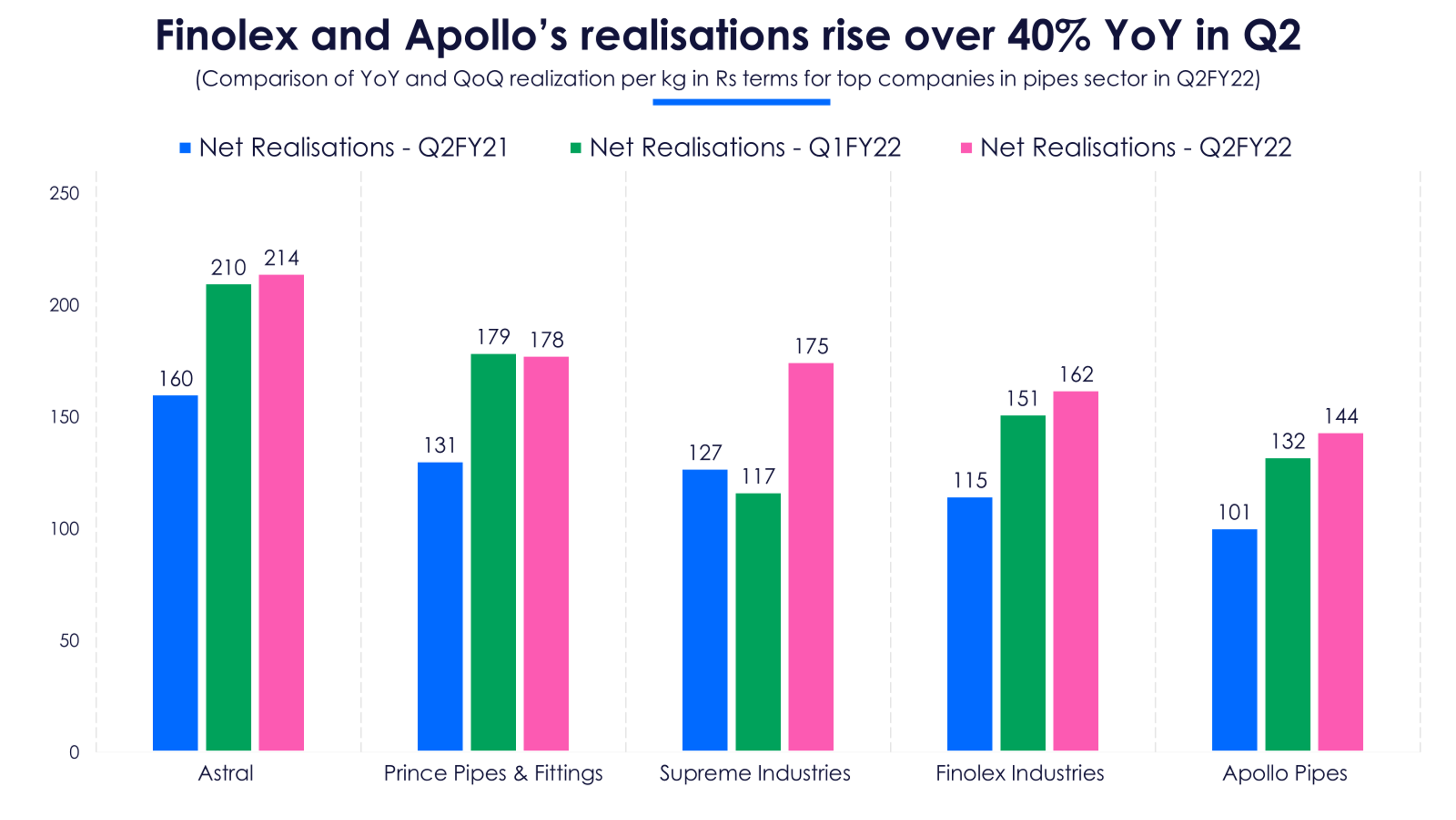 APL Apollo’s realisations grew 58% YoY to Rs 72,223/tonne as the share of its value-added products in the overall sales mix rose to 62% in Q2FY22 from 53% in Q2FY21. Interestingly, the company sold lower numbers of units in Q2 (4.27 lakh tonnes) but earned more for each unit sold. 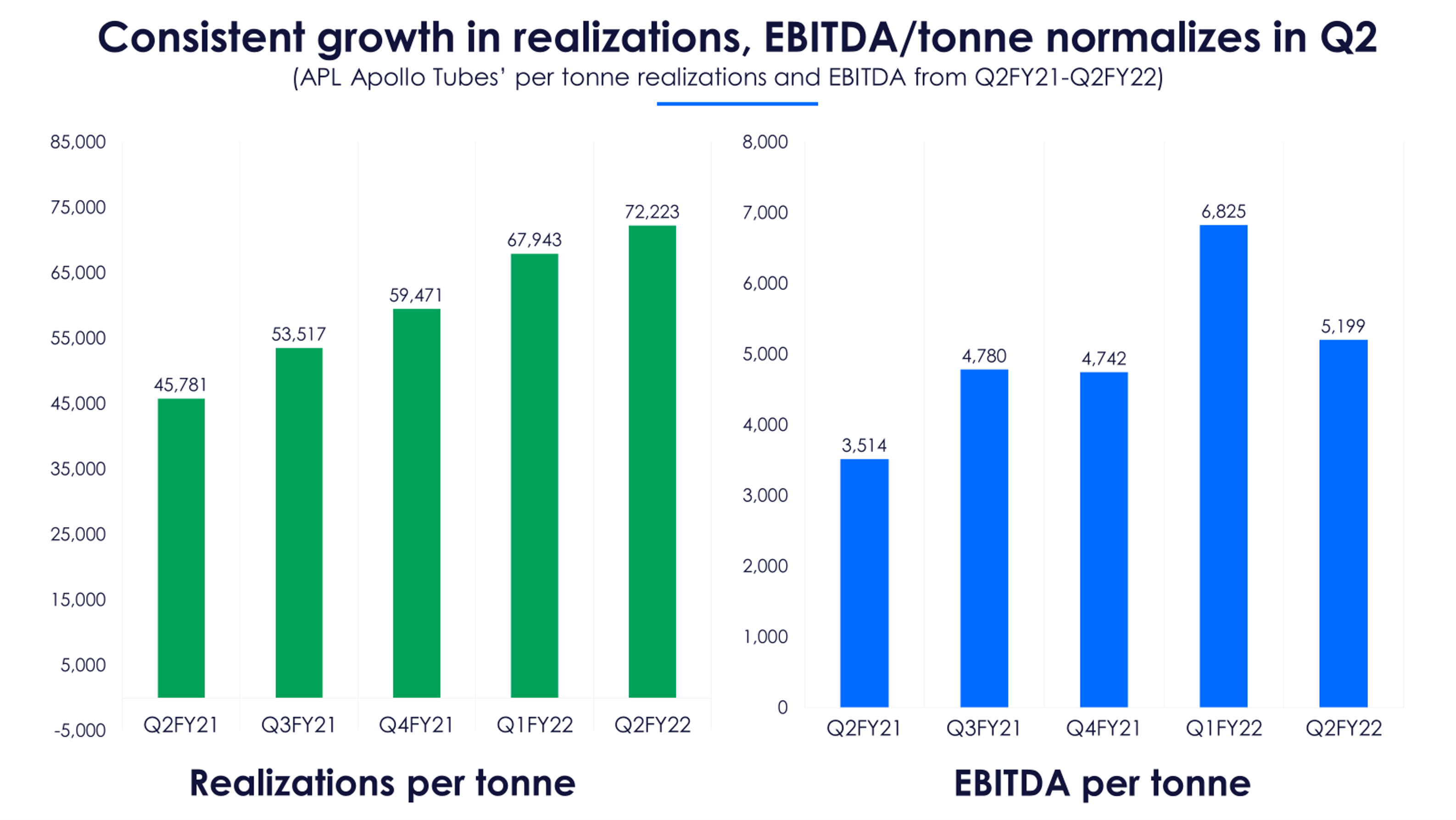 According to Prince Pipes’ management, there were considerable inventory gains for PVC pipe players in Q3 and Q4FY21. Essentially, the companies gained on the low-cost PVC resin stock lying with them when prices started rising from Q2FY21. To put this simply, pipe players hiked prices while selling their finished product and assigned the cost of their old inventory, which was cheaper, to their sales value. This translated to a higher gross profit for them. This also explains the peak EBITDA margins of Q4FY21. However, the margins normalized in the next two quarters. 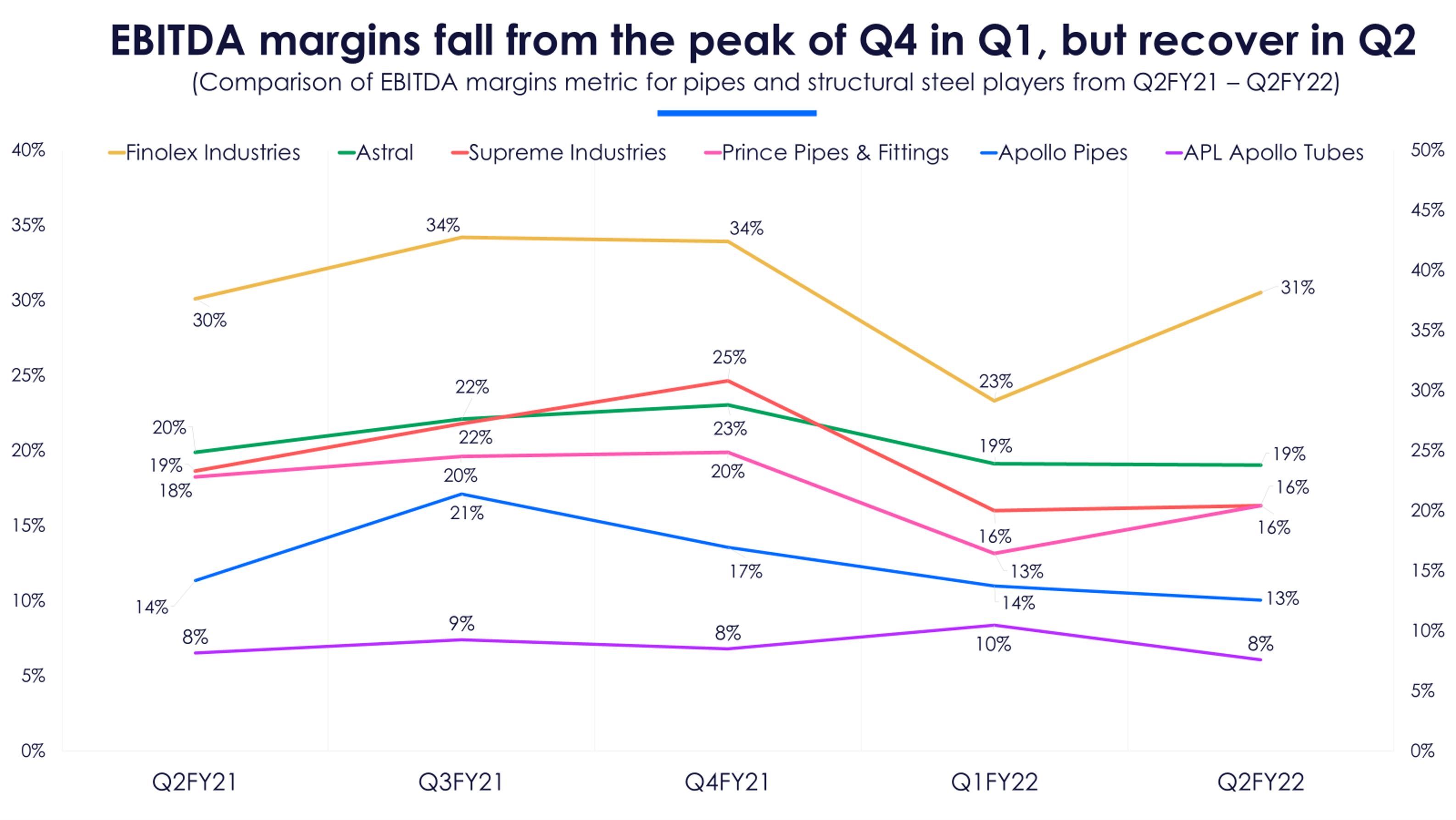 The fortunes for Prince Pipes & Fittings changed in FY21 after it tied-up with Lubrizol to gain technical know-how and manufacture the ‘FlowGuard Plus’ product. Lubrizol is a leading supplier of chlorinated polyvinyl chloride (CPVC) compounds. Pipes made out of these compounds have higher strength and temperature resistance. Foray into CPVC pipes division in August 2020 led to margin expansion for the company over the next few quarters. Pipe players can make EBITDA margins to the tune of 16-18% in this segment, which is 400-500 bps higher than that of the regular PVC plumbing segment. This move coupled with robust revenue growth led to a 63% YoY growth in its Q2 net profits which were at Rs 76 crore. 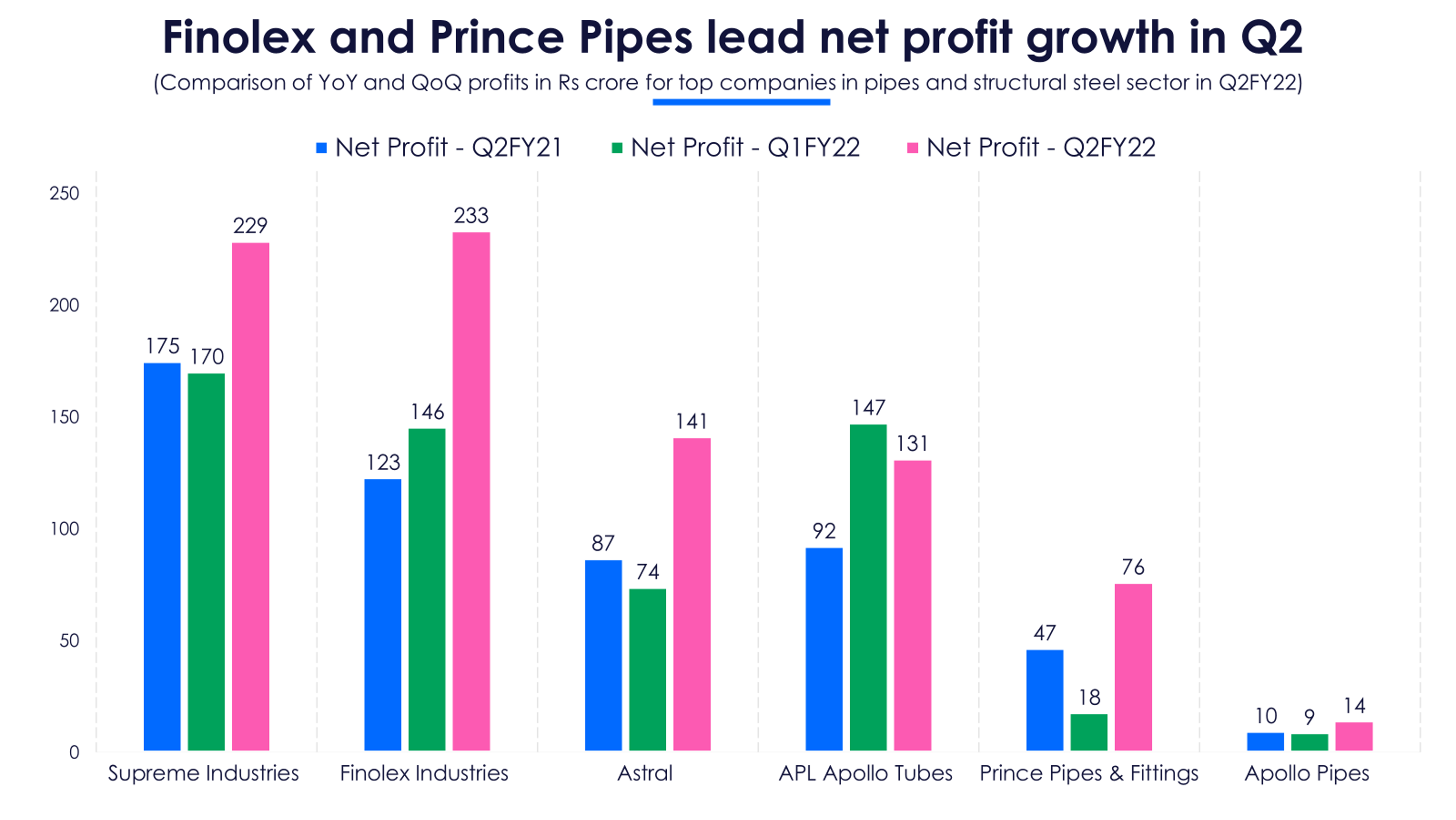 CPVC pipes to drive demand on housing side, agricultural demand to revive in H2FY22

CPVC pipes account for 15-16% of the plastic pipes industry and will be the fastest growing segment with over 20% CAGR in next 3-4 years. Players like Prince Pipes introduced CPVC pipes for industrial applications in H1FY22. The company has also partnered with Ultratech Building Solutions platform (an initiative of UltraTech Cement) which has a vast network of 2,000+ dealers to gain traction for its CPVC segment on the consumer side. These steps will yield higher sales and improve operating margins for the company in FY22-FY23.

High PVC prices particularly affected the demand from the agricultural segment in H1FY22. Consumers in this segment i.e., farmers deferred their capex plans owing to high price sensitivity. Interestingly, major agricultural water pipe players likeFinolex Industries and Apollo Pipes expect this segment to revive in H2FY22 as PVC prices start to cool off. One should note here that the EBITDA margins (6-9%) in this segment are way below that earned from the plumbing and sewerage segment. This also explains the low margins of Finolex Industries in the pipes segment. The company derived 79% of its EBIT from the highly volatile PVC resin segment in H1FY22.

Enthused by the robust demand outlook discussed above, PVC players like Astral, Prince Pipes and Supreme Industries committed Rs 180-250 crore for capacity expansions in H1FY22. On the other hand, Apollo Pipes will work towards sweating its existing capacity as its current utilization level is around 50%. 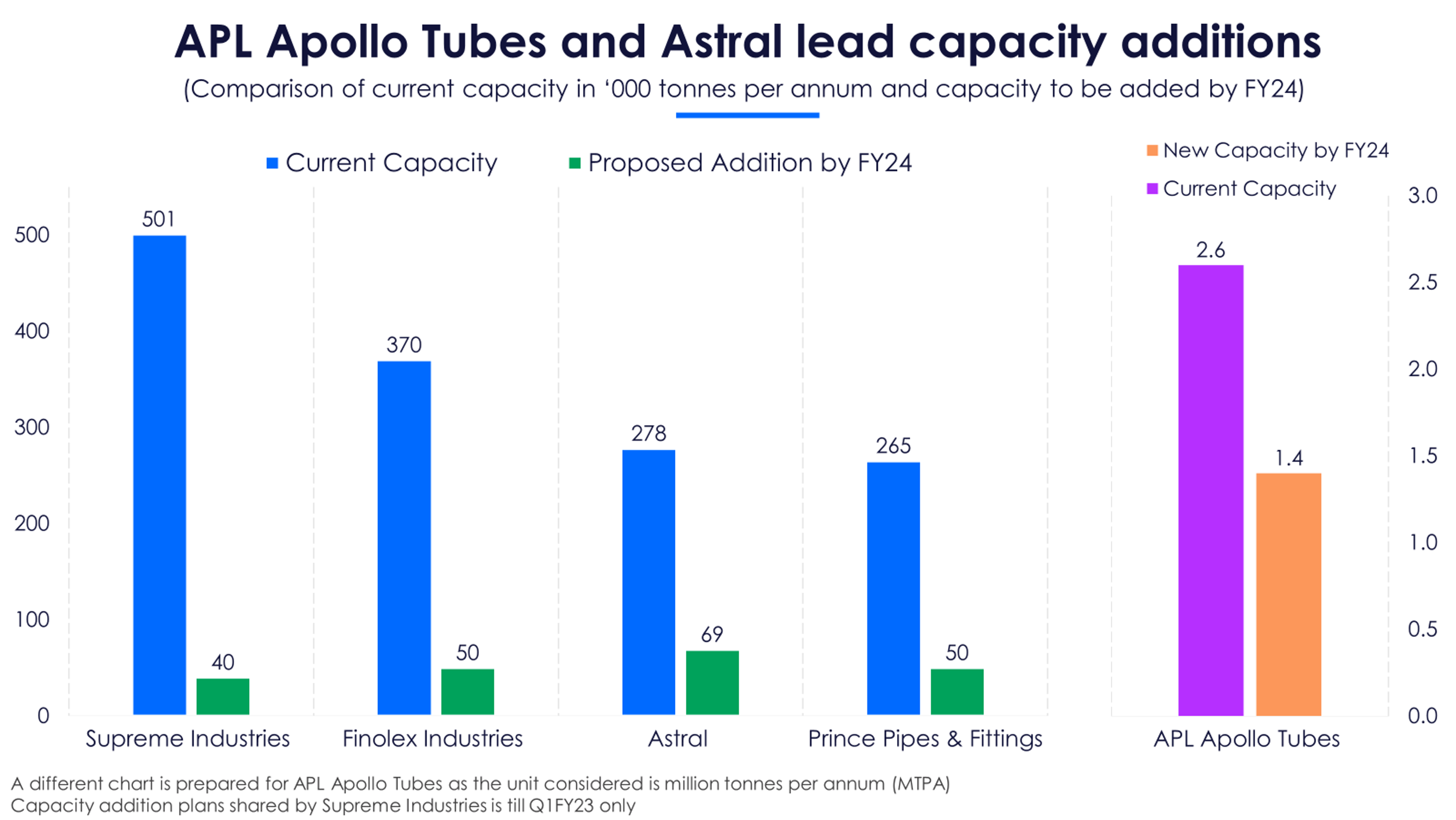 One common thread among the plastic pipe players like Astral, Prince Pipes and Apollo Pipes is the recent foray into the water tanks business. With top companies like Sintexgoing under, plastic pipes companies got an opportunity to enter this lucrative sector backed by their strong distribution network. The asset turnover in this space is around 4-4.5 times and standard EBITDA margins are around 14-15%.

APL Apollo to add capacities in its value-added segments, PVC prices to cool off post H2FY22

APL Apollo Tubes, which already has 50% market share in the structural steel tubes market, plans to further augment its capacity by 54% to nearly four million tonnes per annum in next 3-4 years. This plan will involve an outlay of Rs 500-560 crore.

With the acquisition of Apollo Tricoat Tubes, the company now derives 75% of its sales from the building materials segment. Hence, it is all set to be a key beneficiary of the upcoming growth cycle in the real estate market.

However, the near-term outlook looks blurry as the company’s volumes fellby 17% YoY to 4.02 lakh tonnes in Q3FY22. Weak construction activity and the impending correction in steel prices caused the distributors to reduce their stocks.

In their Q2 earnings call, the managements of Supreme Industries and Finolex Industries highlighted that PVC prices will be on a downward trajectory once the supply concerns ease from Q4FY22 onwards. However, the prices moderated from November 2021 itself.  With the emergence of the Omicron variant of Covid-19, and with international restrictions back in place, supply side constraints are unlikely to ease in H2FY22.

One notable mention here would be Finolex Industries. The company faces the highest risk of margin correction among other PVC pipe players in FY23-24. The reason is that the current difference between PVC resin and its key input, ethylene dichloride (EDC), is at an unsustainable level of $900/tonne, reflecting high gross margins. The average PVC-EDC difference was $500/tonne back in Q1FY21. The company’s average EBITDA margins between FY18-20 stood at 18.3% as against 31% in Q2FY22.

According to Trendlyne’s Forecaster, pipes and structural steel makers are expected to post an over 20% YoY average revenue growth in H2FY22. 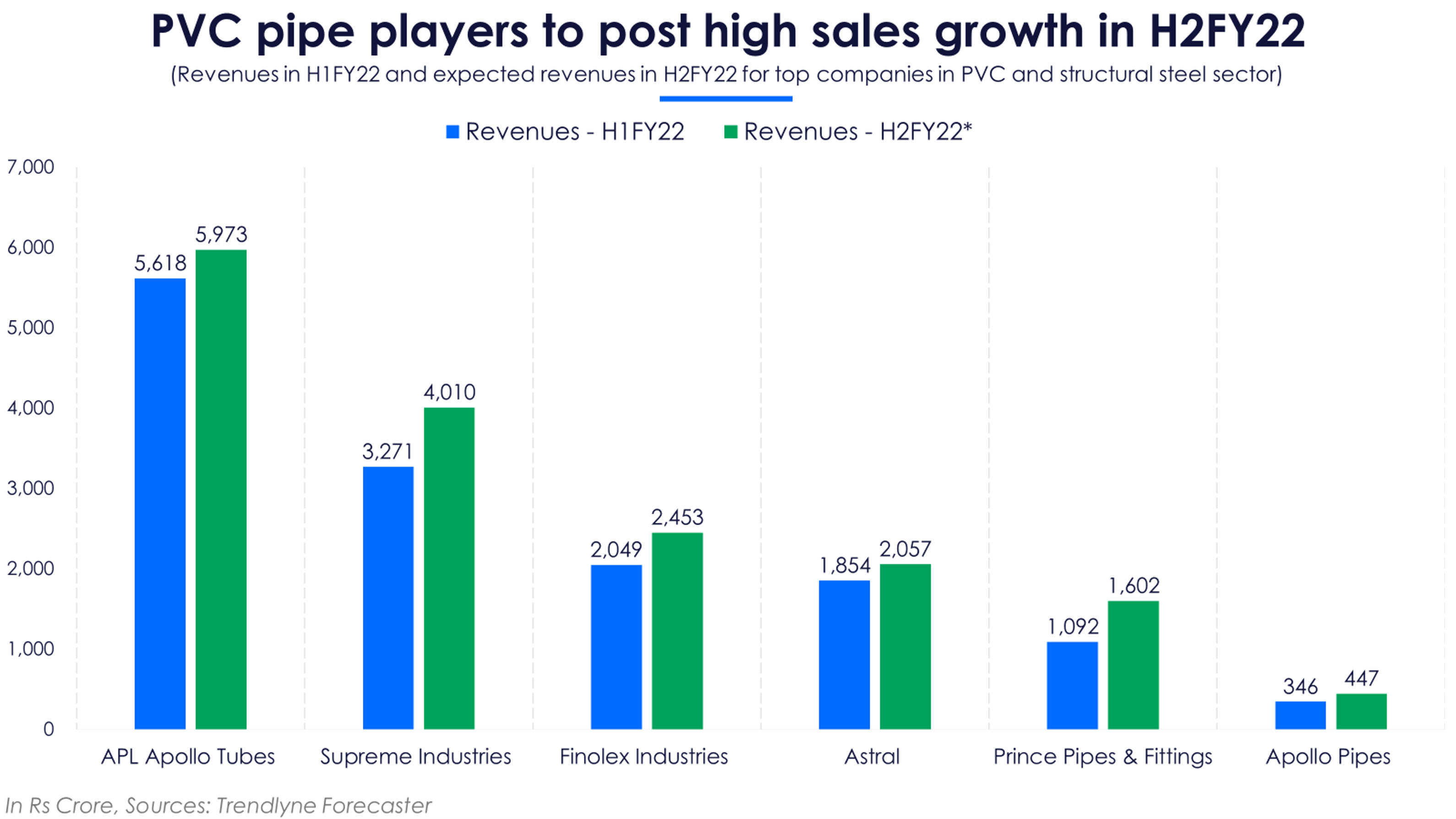 However, profit growth is expected to be in single digits for most companies, except for Prince Pipes. 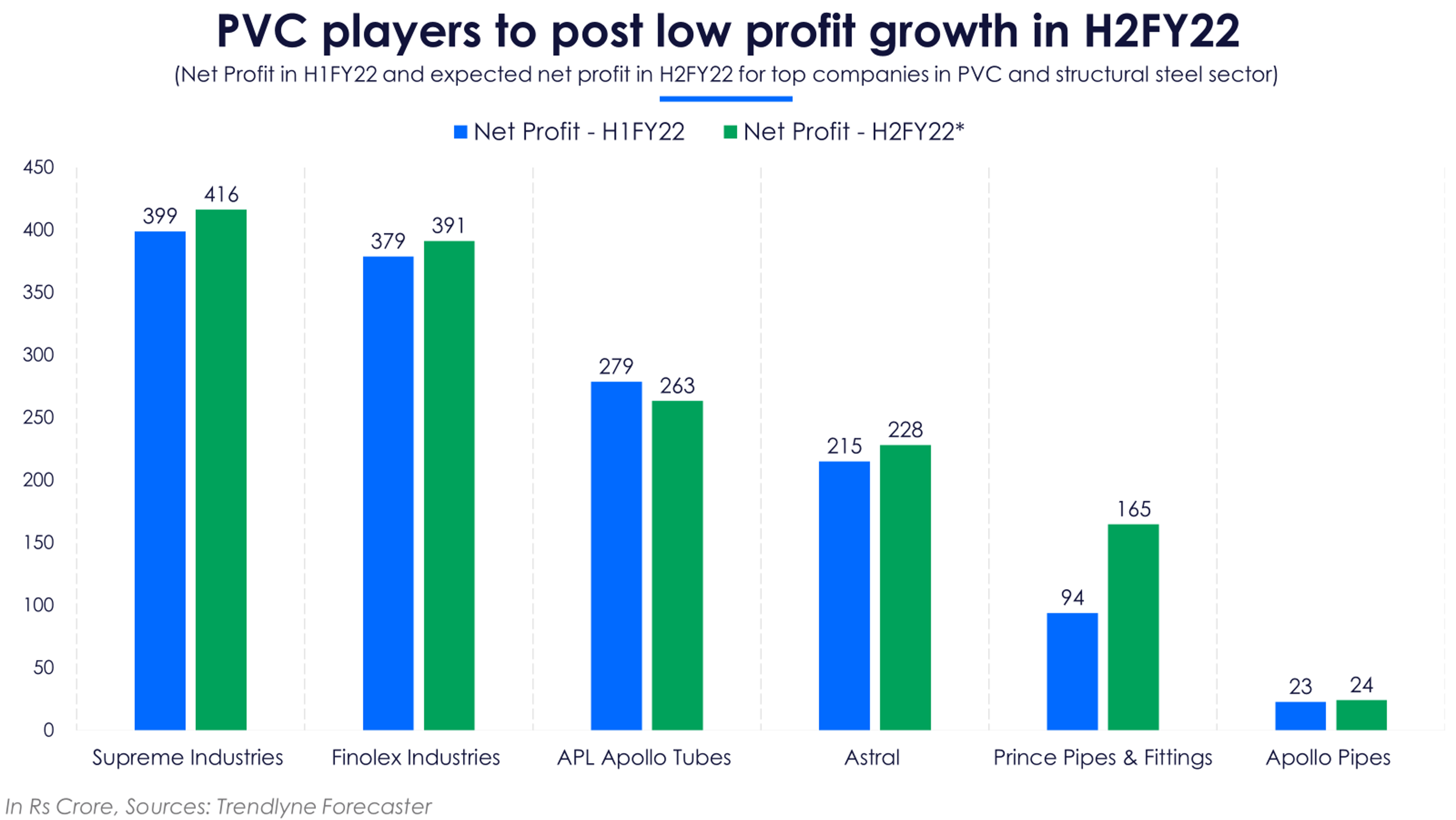 All in all, the party is far from over for the PVC pipe and structural steel players. While there is little possibility of high realisation growth going forward, the demand outlook stays intact.