The monthly portfolio disclosures by mutual funds give investors an idea of where the smart money is moving in the market, and the sectors and companies that are in vogue or have fallen off the radar for fund managers. This screener shows stocks where mutual funds increased holdings month on month. This month's data shows growing interest from fund managers in a housing finance company, power trading company, a large conglomerate, and a steel pipe manufacturer among others. 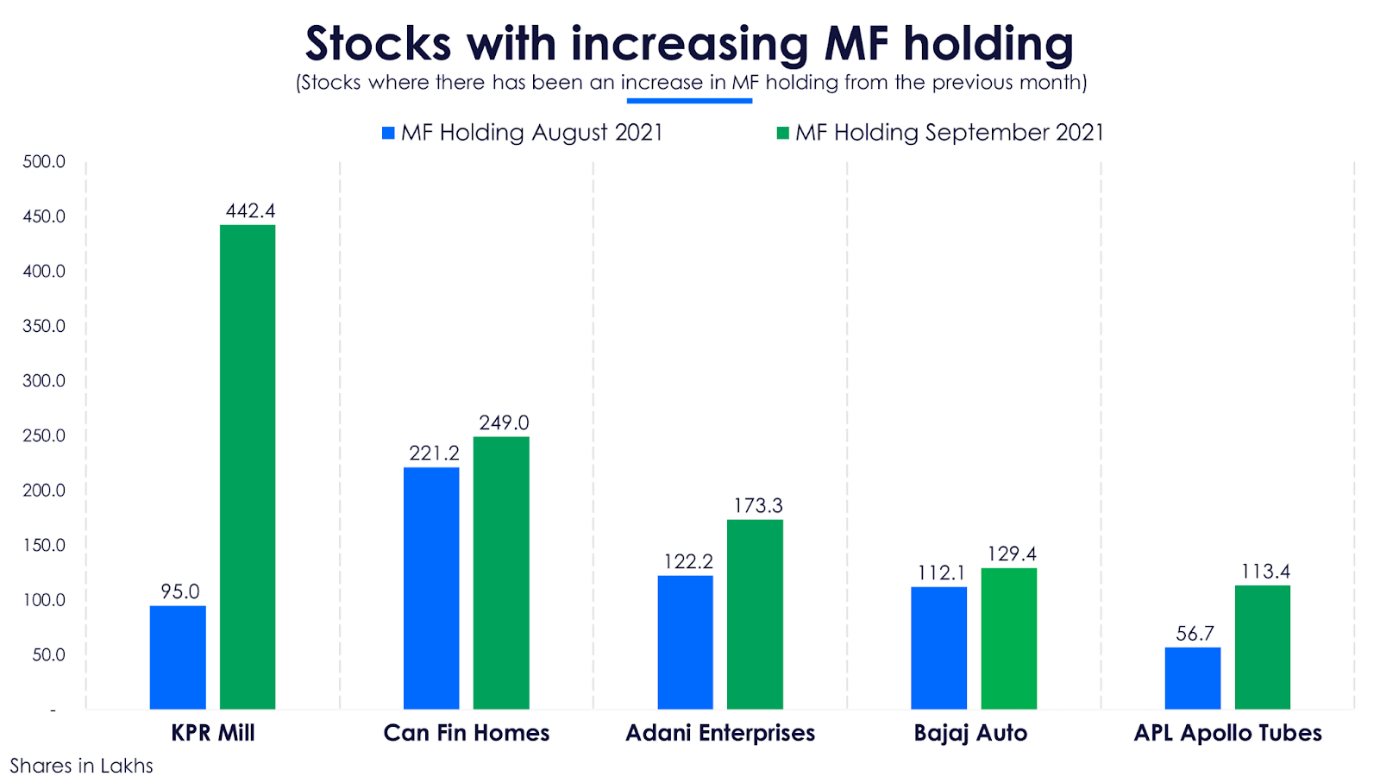 KPR Mill is one of India’s largest knitted garment manufacturers. Its upcoming garments facility with an annual capacity of 42 million pieces is expected to be commissioned by Q2FY22. From this incremental capacity, 60-70 % is to be utilised for existing customers and balance for new customers. The new facility is expected to generate incremental revenue of around Rs 600 crore from FY23 onwards.

Additionally, the company is expected to benefit from government policies like the textiles parks policy, two of which are proposed in the state (Tamil Nadu) where its existing production facilities are located.

Can Fin Homes is a retail-focused housing finance company promoted by Canara Bank. The company primarily operates in the affordable housing category with the average ticket size of the loans being less than Rs. 25 lakhs with a median tenure of 16 to 20 years.

The real estate and housing finance sector is in a sweet spot since the interest rates are at their lowest levels in the last two decades. The government’s focus and tax breaks for affordable housing borrowers and builders, together with waivers or concessions on stamp duties by some states, will further boost demand.

In addition, Adani Enterprises has been allotted over 34,000 sq metre land for setting up a data centre in Noida. The expected investment is around Rs 2,400 crore. Another vertical that the Adani Group is set to enter is the cement business.

With massive expansion plans across various sectors, this is one stock which is drawing interest from investors and fund managers.

Bajaj Auto’s monthly wholesales have been rising over the last two months. The government has announced a PLI (production linked incentive) scheme for the auto sector with a focus on EVs (electric vehicles). Bajaj Auto already sells EVs and it is expected to be a beneficiary of the scheme.

APL Apollo Tubes is India’s leading structural steel tube manufacturer with a pan-India presence. It is the largest manufacturer of Structural Steel Tubes in India, which finds applications in residential and commercial buildings, warehouses, factories, agriculture, and other Infrastructure works and commands 50% market share in India.

With increasing transition to structural tubes, the Delhi government recently announced construction of seven hospital buildings at different locations using 100% structural steel tubes, with APL Apollo being the sole supplier. The entire project is expected to be completed in a record time of five months. 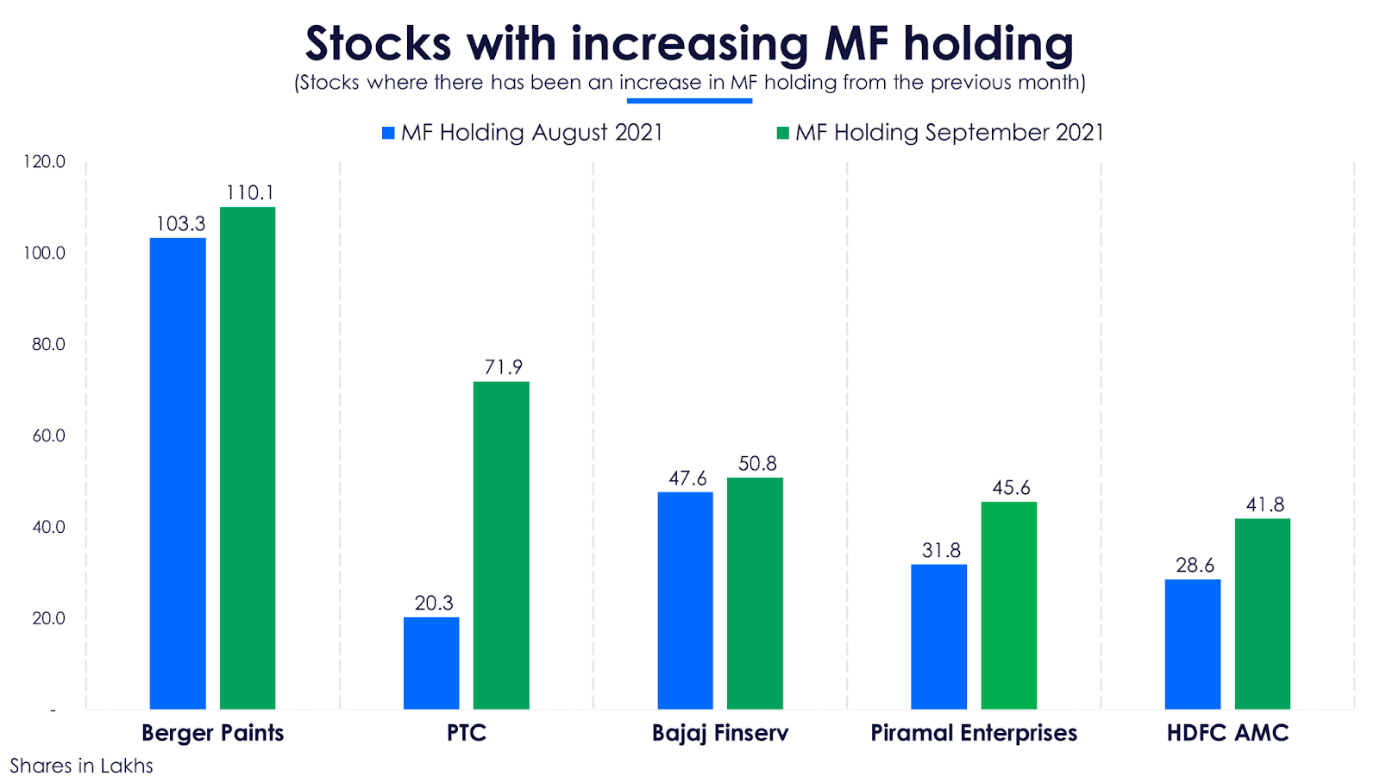 Berger Paints is the country’s second largest paints maker in the decorative segment. It is eyeing a consolidated turnover of Rs 10,000 crore in next three years. In FY21, it had clocked revenues of around Rs 6,800 crore, which was its highest ever annual revenues.

The management has indicated that while it is also growing its international presence, the major contributor to the growth would be the India market and the drivers would be the decorative, protective and construction chemicals segments.

The paint sector is getting highly competitive with the recent entry of JSW Paints and the proposed entry of Aditya Birla Group into paints. This has put the paints industry on the radar of fund managers.

PTC - Charging up for power play with new policy

PTC (Power Trading Corporation), the leading provider of power trading solutions in India, was established in the year 1999 as a government initiated Public-Private Partnership, which would  primarily focus on developing a commercially vibrant power market in the country.

The government recently announced the framework for the implementation of the Market Based Economic Despatch (MBED) system - Phase 1, a new set of reforms that will push the power sector away from power purchase agreements towards market-based pricing. This will be implemented from FY23 onwards.

MBED is an electricity market which aims to cut power procurement costs of power distribution companies (discoms). Power plants which supply electricity across multiple states will have to mandatorily participate in the MBED system while other generation plants can also volunteer. PTC is expected to play a key role under the MBED system.

It saw a muted performance in Q1FY22, due to the severe impact of second lockdown on NBFCs (non-banking finance companies) and higher reinsurance ceded in insurance business. It is expected to recover Q2FY22 onwards, with normalcy in economic activities and technological initiatives that augur well for the next stage of growth.

Recently, Bajaj Finserv got SEBI’s in-principle approval to sponsor a Mutual Fund (MF). This has got investors and fund managers excited about this stock.

PEL - Value unlocking on the cards with demerger

PEL (Piramal Enterprises) is a company with diverse interests including pharmaceuticals, housing finance and construction. In September 2021, PEL completed the acquisition of the bankrupt Dewan Housing Finance Corporation Ltd (DHFL) by making cash payment of ?14,700 crore to creditors as per the resolution plan.

Recently, PEL’s board approved the simplification of its corporate structure by creating two separate listed entities in Financial and Pharmaceutical Services, subject to shareholder, creditor and regulatory approvals. The demerger would optimize the capital structure for each business and enable both to independently pursue growth opportunities.

HDFC AMC is banking on Navneet Munot, who took on the reins this FY as Managing Director to drive it to a leadership position. In a recent call with investors, the MD said that they have launched a few products, and are planning to launch some more products over the next few quarters, which would capture investor attention and help the company gain market share.

Standard Life Investments, which held 21.2% of HDFC AMC stake, offloaded 5% of its stake in September 2021, leading to buying by fund managers.