Hero MotoCorp's (HMCL) stock price is down 6% in the past one year, while in the same period Bajaj Auto and TVS Motors’ shares gained 28% and 20%, respectively. Analysts expected Covid-19 driven-downtrading and strong presence in the entry motorcycle segment to spur Hero MotoCorp’s volumes. But the pandemic exposed Hero MotoCorp’s weak presence in key growth segments - premium motorcycles and exports.

Although Hero MotoCorp management is expecting a stable Q2FY22, July and August two-wheeler wholesale and retail volumes tell a different story. The company reported the slowest YoY two-wheeler retail volume growth among the top three manufacturers in July-August 2021. Investors are hoping for a strong festive season to boost two-wheeler volumes, but Hero MotoCorp will have to catch up with Bajaj Auto and TVS Motors. Apart from the highly competitive motorcycle market, the company also needs to shore up its defences in a highly dynamic and charged e-scooter market. 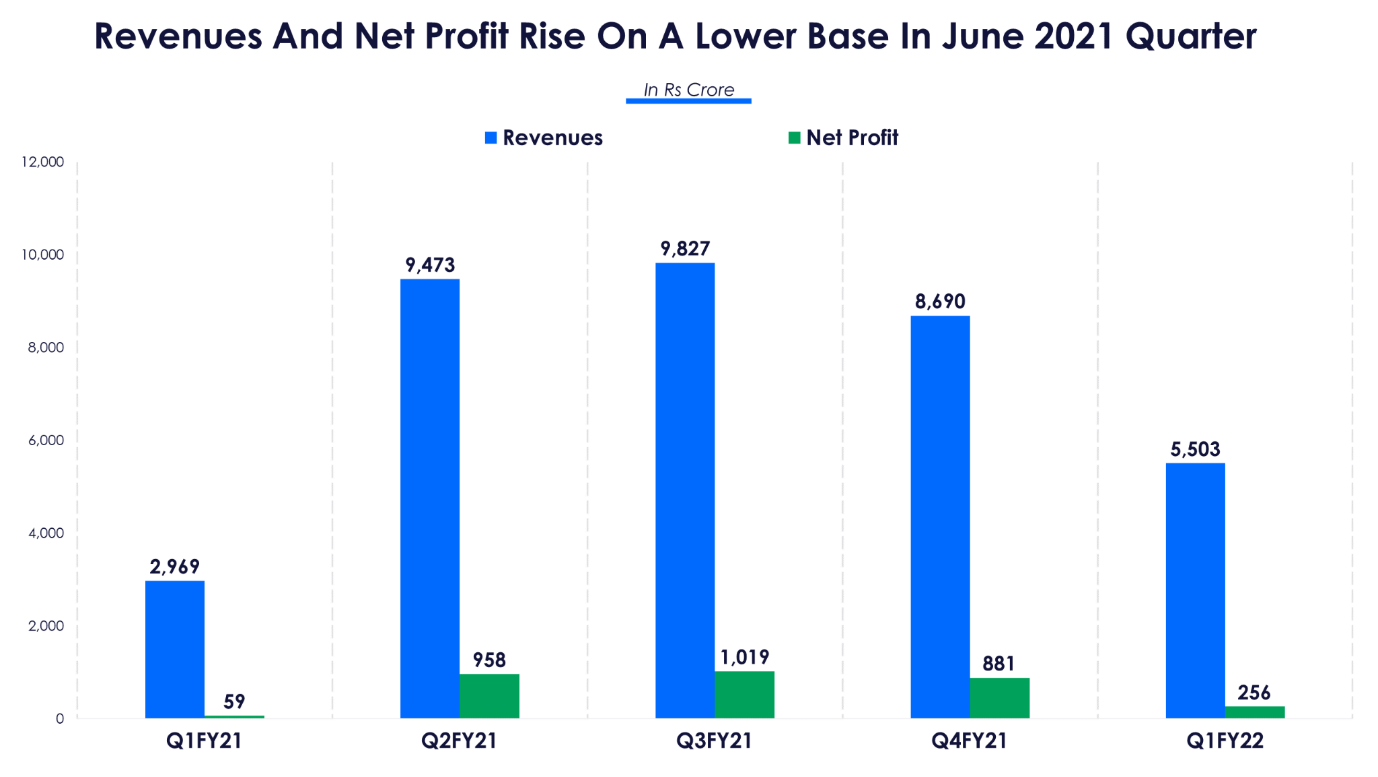 HMCL’s domestic motorcycle volumes were nearly double that of TVS Motors and 3x higher than Bajaj Auto (BAL) in the June 2021 quarter. But as YoY volume growth was lower compared to its close peers, Hero MotoCorp lagged on the revenue growth front. 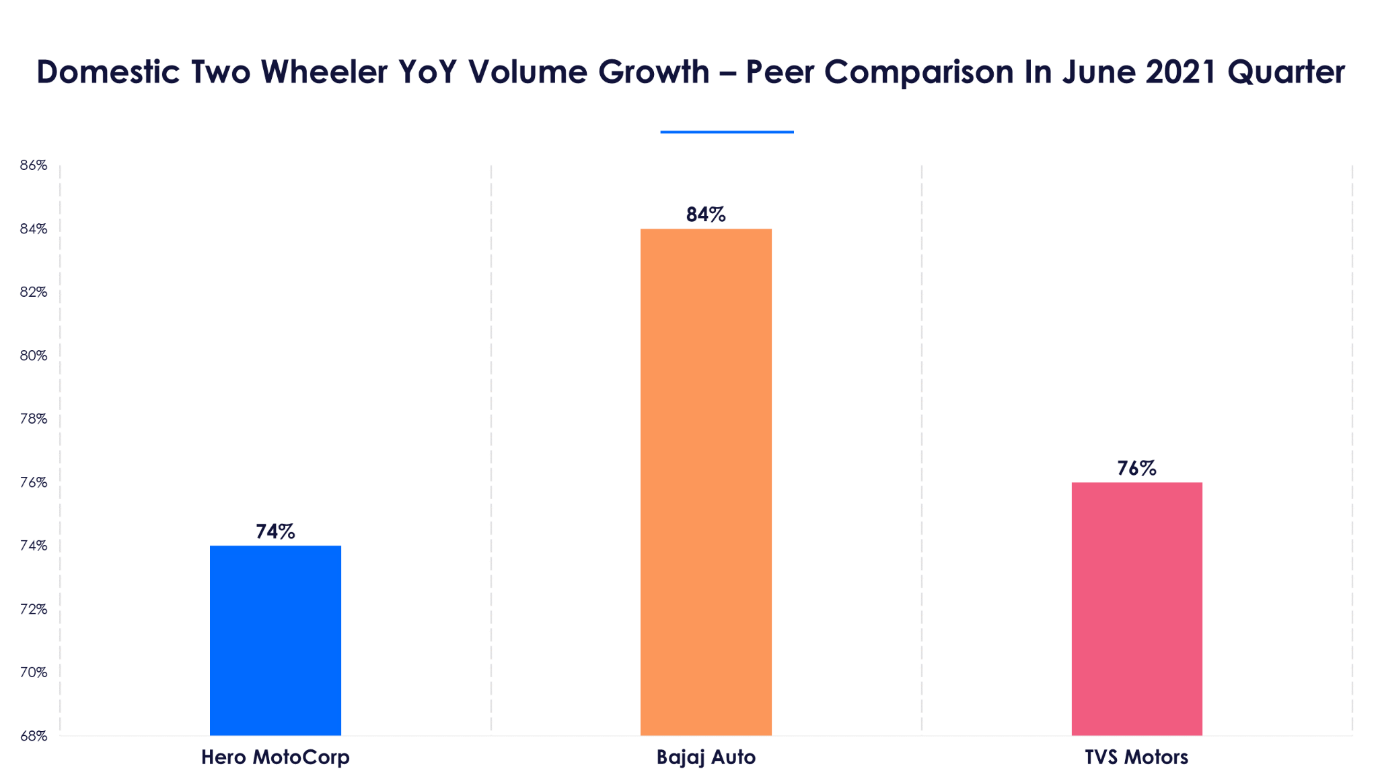 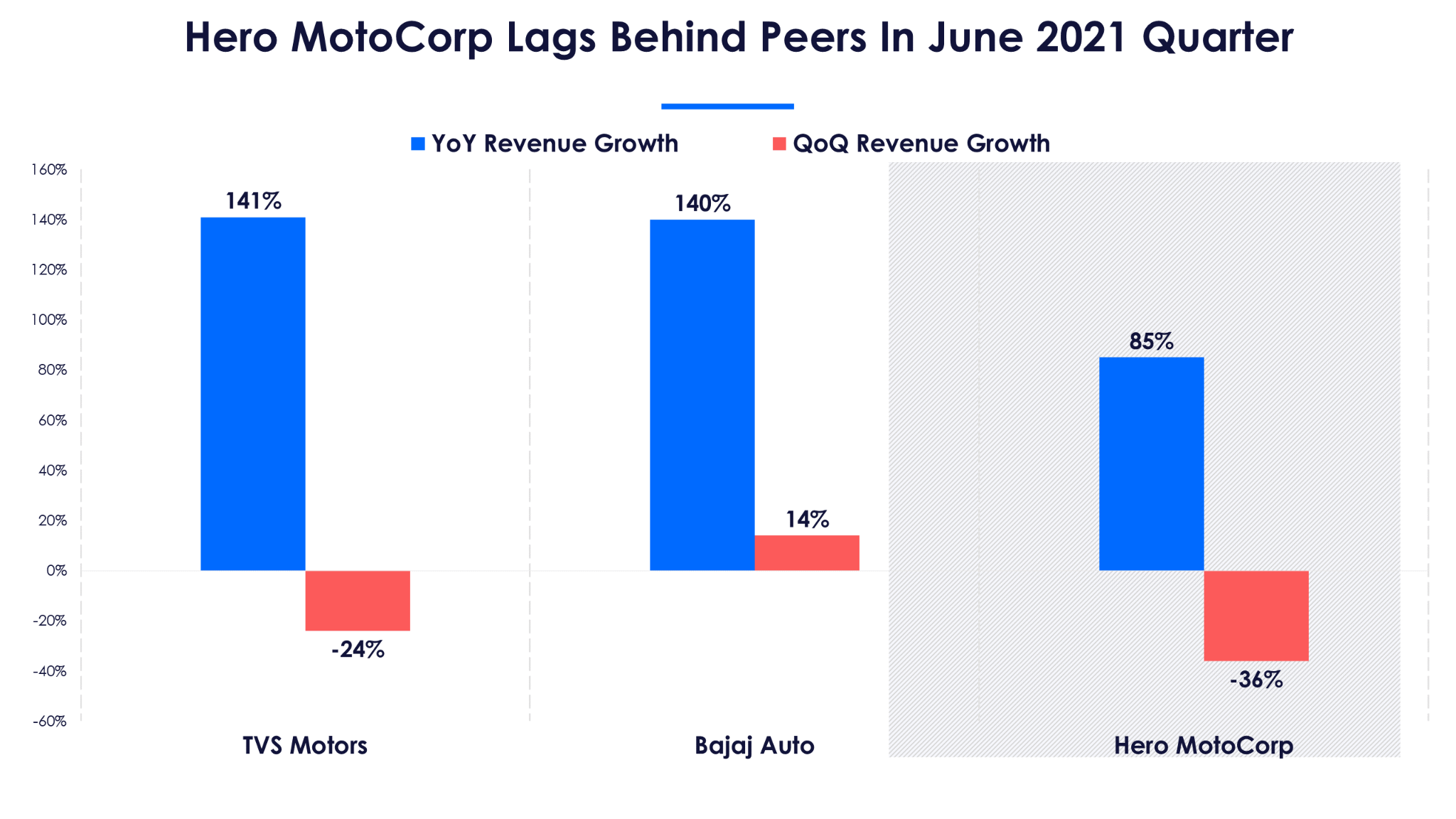 In Q1FY22, HMCL’s revenues were 34% lower than Bajaj Auto's (BAL). BAL is the market leader in the highly revenue accretive premium motorcycles (150 cc+) segment. Prices of some of the premium motorcycles are nearly double or even higher than that of commuter (entry-level) bikes. The Bajaj Pulsar currently holds 10% of the entire domestic motorcycle market. Hero MotoCorp’s market share in the premium segment is a mere 4%. 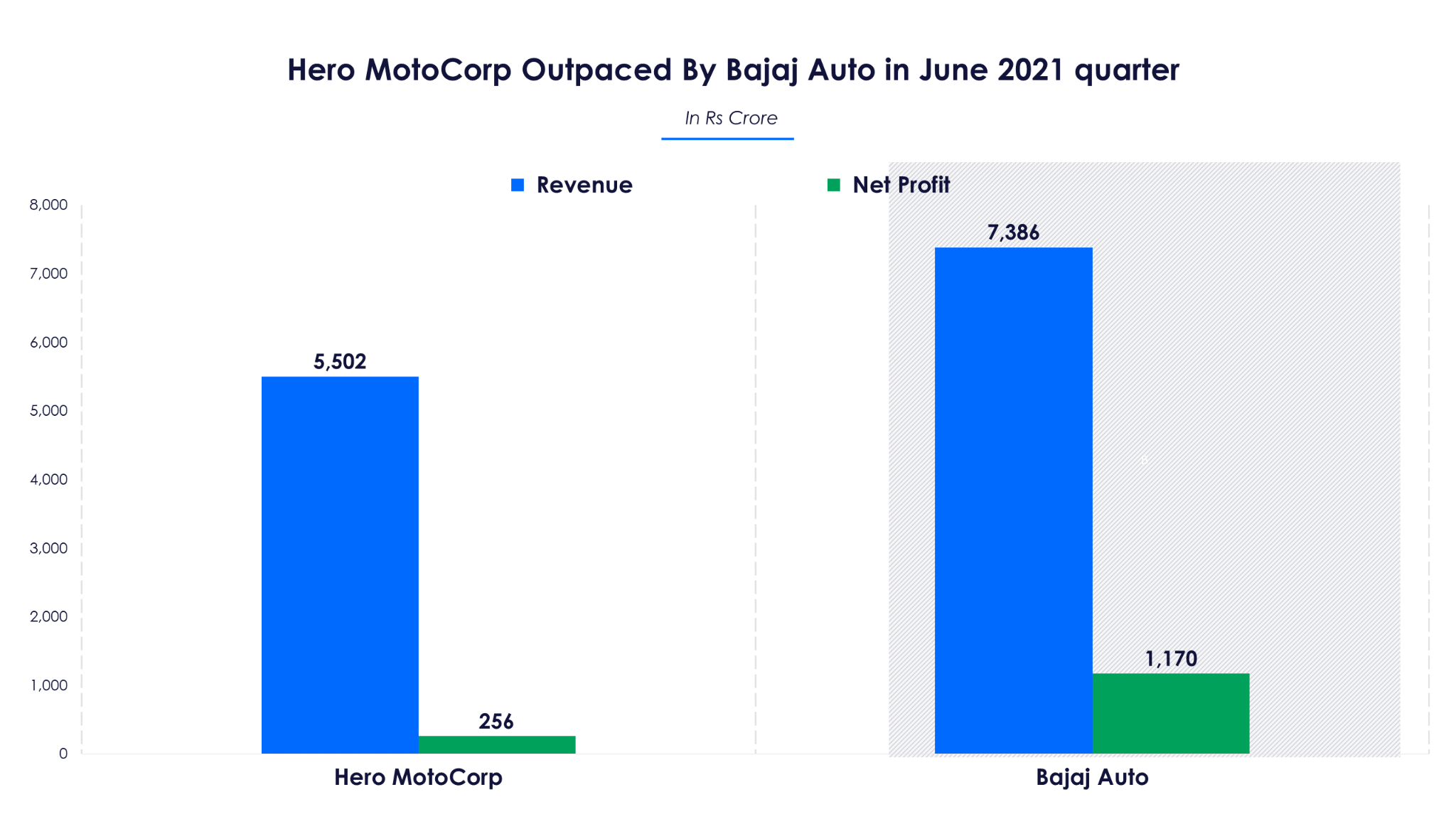 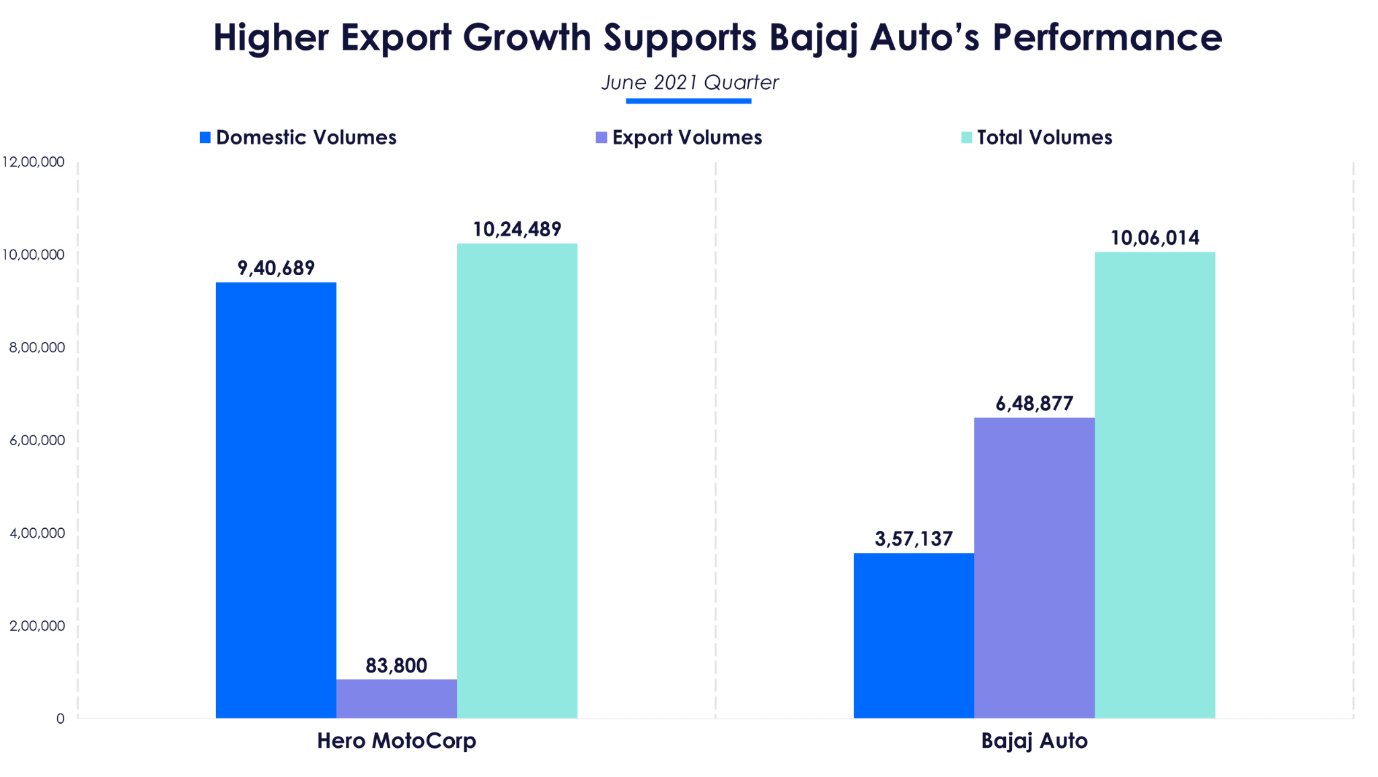 Hero MotoCorp is highly dependent on the domestic motorcycle market, accounting for about 90% of its total revenues. As the Covid-19 second wave filtered into Hero MotoCorp’s stronghold, the rural hinterland, the company was pushed to the back foot compared to its peers in the domestic two-wheeler market. Impacted by the Covid-19 second wave’s penetration into rural India, consumer sentiment is low and discretionary purchases are not at the top of the priority list for rural customers. 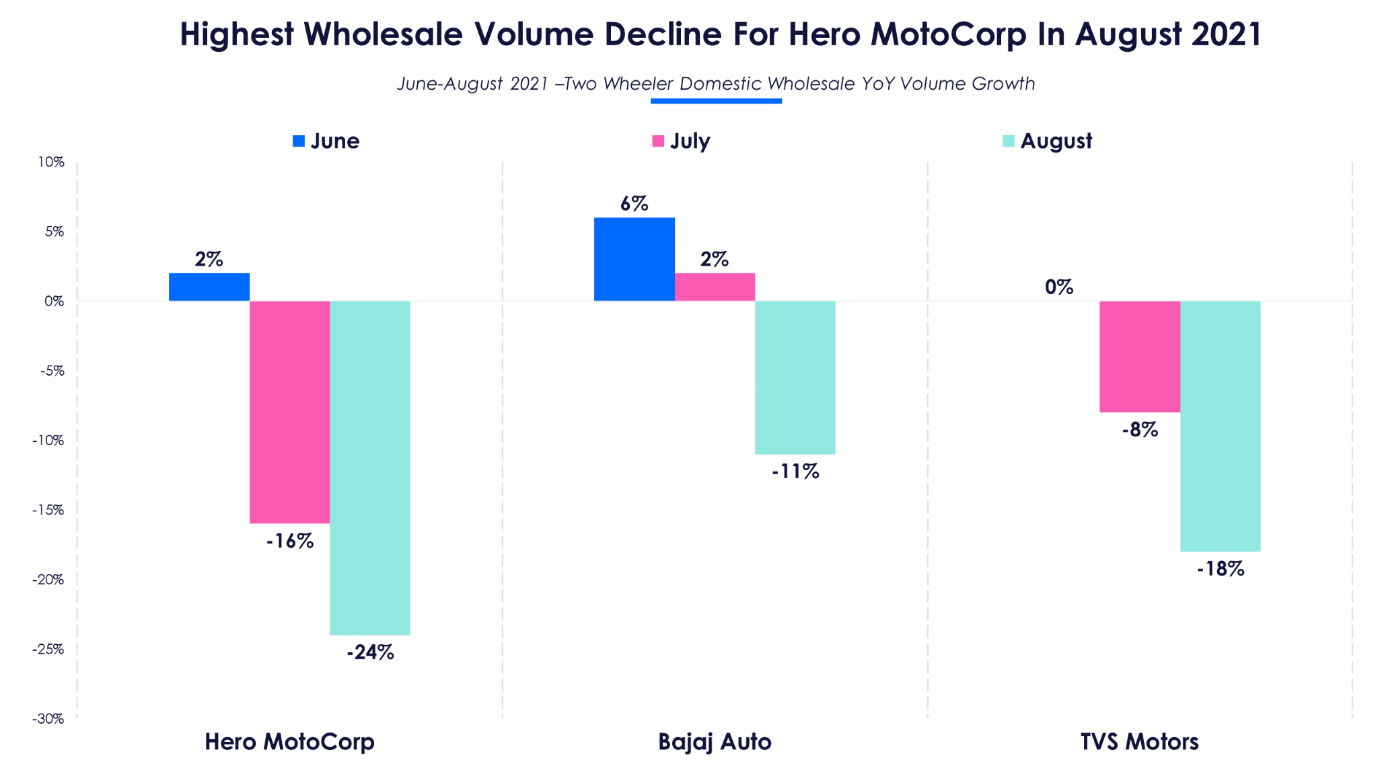 HMCL’s domestic wholesale volumes declined in double digits YoY in both July (down 16% YoY) and August 2021 (down 24% YoY). After pent-up demand fulfillment in June and July 2021 as various regions across India unlocked, two-wheeler retail sales also slowed in August 2021. 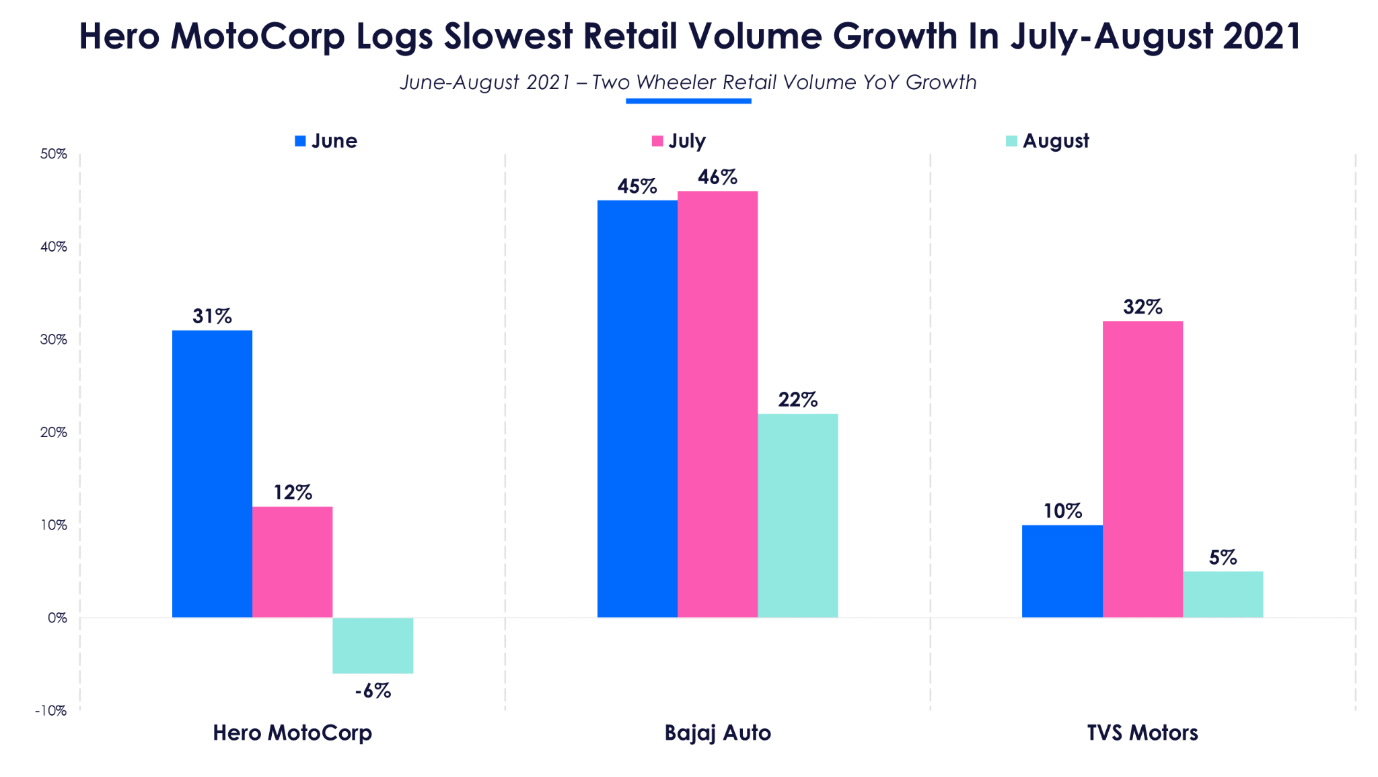 For Hero MotoCorp, lower volume growth was mainly due to higher dependence on rural sales, colleges, and educational institutions still not running at full capacity, and higher cost of ownership, especially for entry segment customers. The company’s 70% revenue mix is garnered from the entry segment (100-110cc) with Splendor, Passion, Glamour, and HF Deluxe as its major brands. HMCL has a 68% market share in the entry-level motorcycle segment in India. Price hikes in two-wheelers by 20-25% over the past two years impacted demand in the high price-sensitive entry level segment. Price hikes implemented by two-wheeler manufacturers post BSVI, rising commodity prices, and rise in fuel prices also impacted two-wheeler demand amid Covid-19 uncertainty.

Apart from higher dependence on the entry-level segment, lower exports composition (8% in Q1FY22) in the overall volume mix is also taking its toll on HMCL’s revenue growth. BAL overtook Hero MotoCorp in terms of worldwide motorcycle volumes in April and May 2021 backed by its robust export growth. Hero MotoCorp is striving hard to augment its export revenue base. Export volumes tripled YoY in July, and August volumes increased 44% YoY. But exports constituted just 5% of total volumes in July-August 2021. Exports were a significant growth booster for BAL (64% of volumes) and TVS motors (50% of volumes) in the June 2021 quarter and the trend continued in July and August 2021. 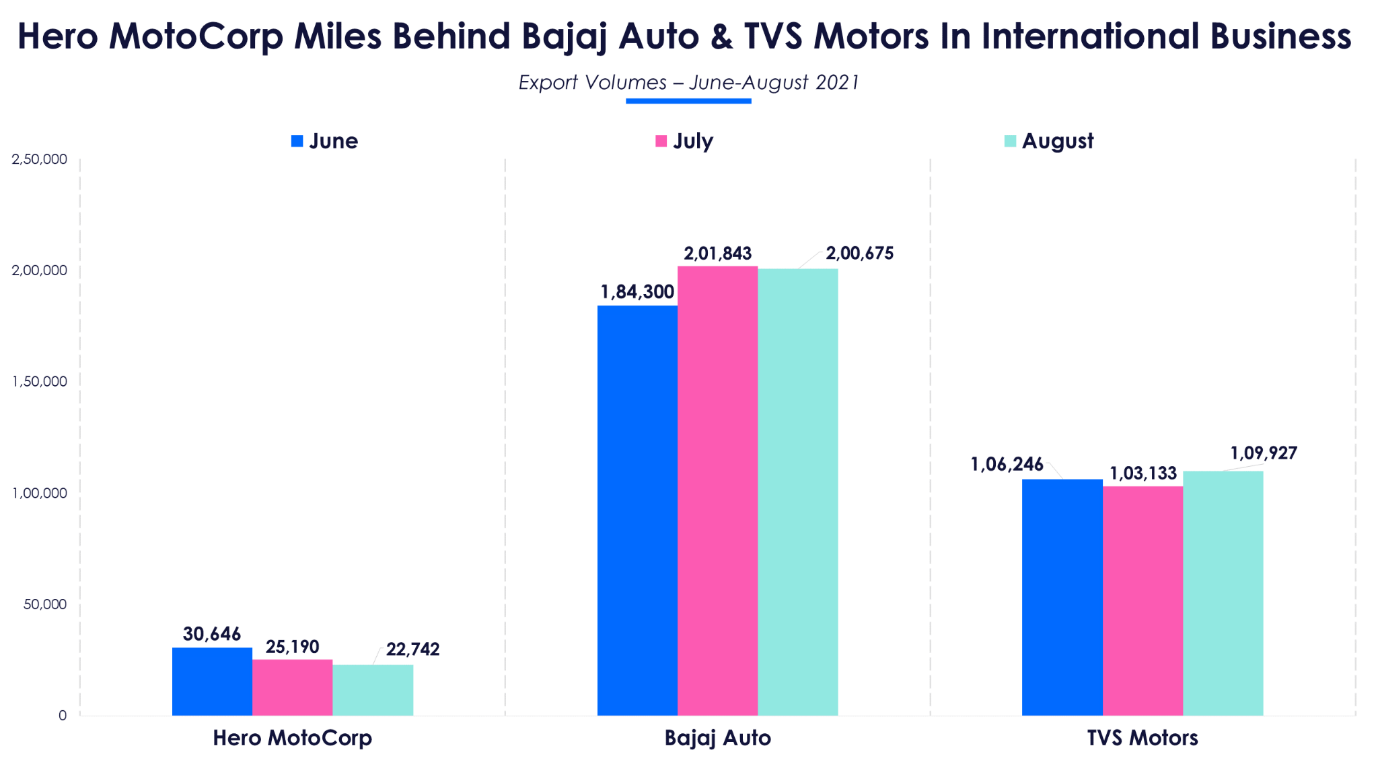 While peers BAL and TVS Motors were forging ahead on the global front, Hero MotoCorp reworked its global business strategy. The management laid down an ambitious target of achieving 15% of revenues from exports by 2025.

Moving on to the premium motorcycle segment, competitive intensity is on the rise with the recent new launches, Triumph Trident 660, Honda’s Africa Twin Adventure and CBR650R, Kawasaki Ninja ZX-10RR, and BMW S 1000 R. Hero MotoCorp’s premium line-up includes XPulse 200T, Xtreme 200S, and Xtreme 160R. The company entered into a licensing agreement with Harley Davidson last year to jointly develop bikes for the premium segment under the Hero-Harley brand. Investors are awaiting the launch of Harley Davidson-Hero motorcycles in the premium segment to battle these foreign heavyweights and homegrown competitors such as Bajaj’s Pulsar, Eicher’s Royal Enfield, and TVS Apache.

E-Scooter market – gearing up for a long drawn battle

To drive up EV adoption, the central government extended the Faster Adoption and Manufacturing of Electric Vehicles (FAME) scheme till 2024. Various state governments also exempted EVs from registration fees and road tax. And all top two-wheeler manufacturers, already on the electrification path, have further revved up their EV plans. Bajaj Auto launched its e-scooter Chetak in January 2021 and is setting up a separate wholly-owned electric vehicles subsidiary. TVS Motors increased its capex by more than 30% for EVs in FY22. Ola Electric launched its e-scooter in August 2021 and earmarked a capex plan of Rs 2,400 crore. The Indian e-scooter market has four major players and is currently dominated by Hero Electric (Vijay Munjal Group) with more than 35% market share. 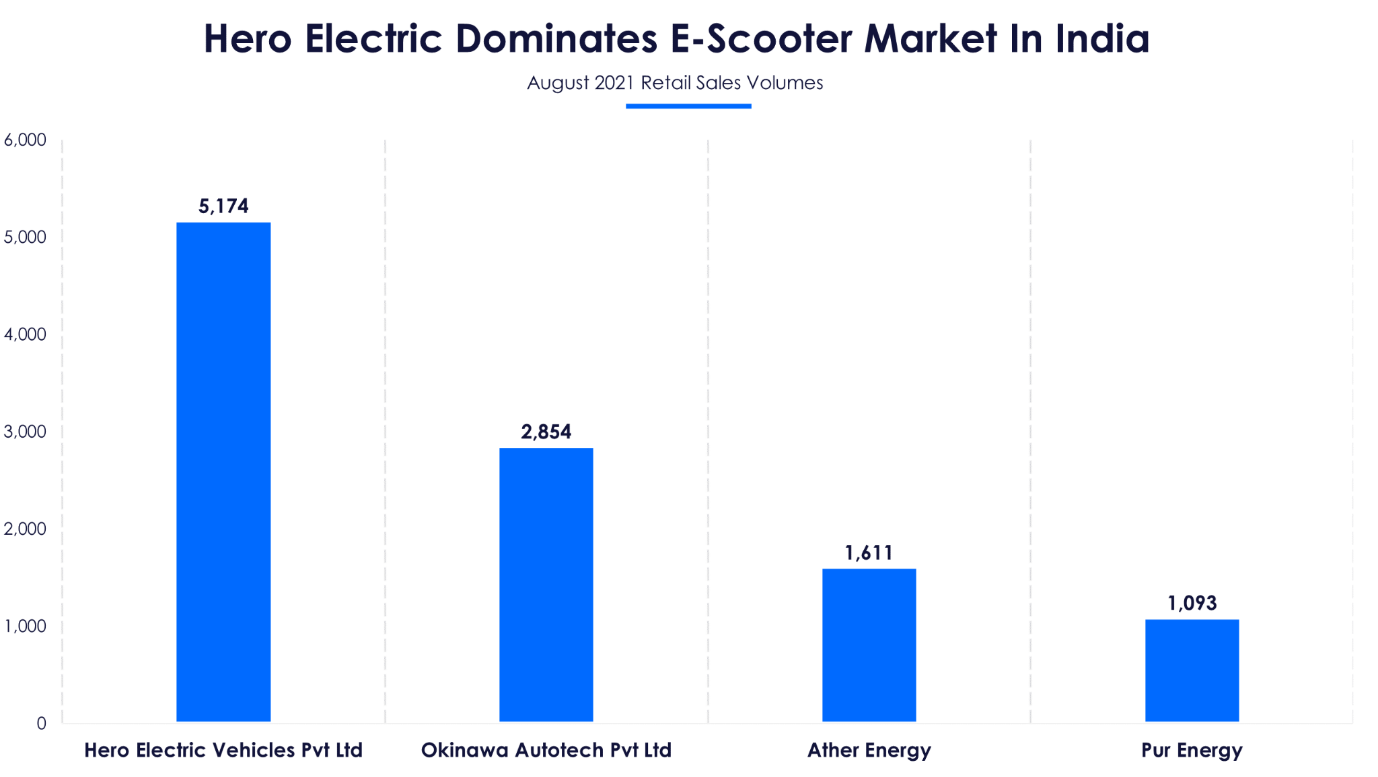 Hero MotoCorp is not too far behind, with plans to launch its first electric vehicle, an e-scooter in Q4FY22. The e-scooter, based on fixed charging technology is being developed by its Jaipur and Germany R&D centres. Speaking on the company’s future electric vehicle (EV) strategy, Pawan Munjal said that HMCL has a full pipeline of EV products under development. This includes an electric 3-wheeler and Hero-Gogoro JV product, another electric scooter based on a battery swapping platform.

Taiwan’s Gogoro manufactures electric scooters based on a swappable battery system. Munjal said that fixed charging and battery swappable stations will be created simultaneously along with the launch of their respective e-scooters. Munjal further added that charging stations will be developed by HMCL in partnership with Gogoro and Ather Energy. Hero MotoCorp is the largest shareholder in Ather Energy (an EV start-up) with a 38% stake. The company recently announced that 50% of its annual capex every year will be allocated to electric vehicle development. The capex for FY22 is expected to be in the range of Rs 750-1,000 crore. Speaking on the initial phase of vehicle electrification in India, Niranjan Gupta, CFO at Hero MotoCorp said that the company’s 10% market share in the scooter segment (6% of total volume mix in Q1FY22) will be further augmented as 'scooterization' of EVs takes a lead over motorcycles. HMCL’s scooter portfolio includes Destini 125, Pleasure+ 110, and Maestro Edge 125. 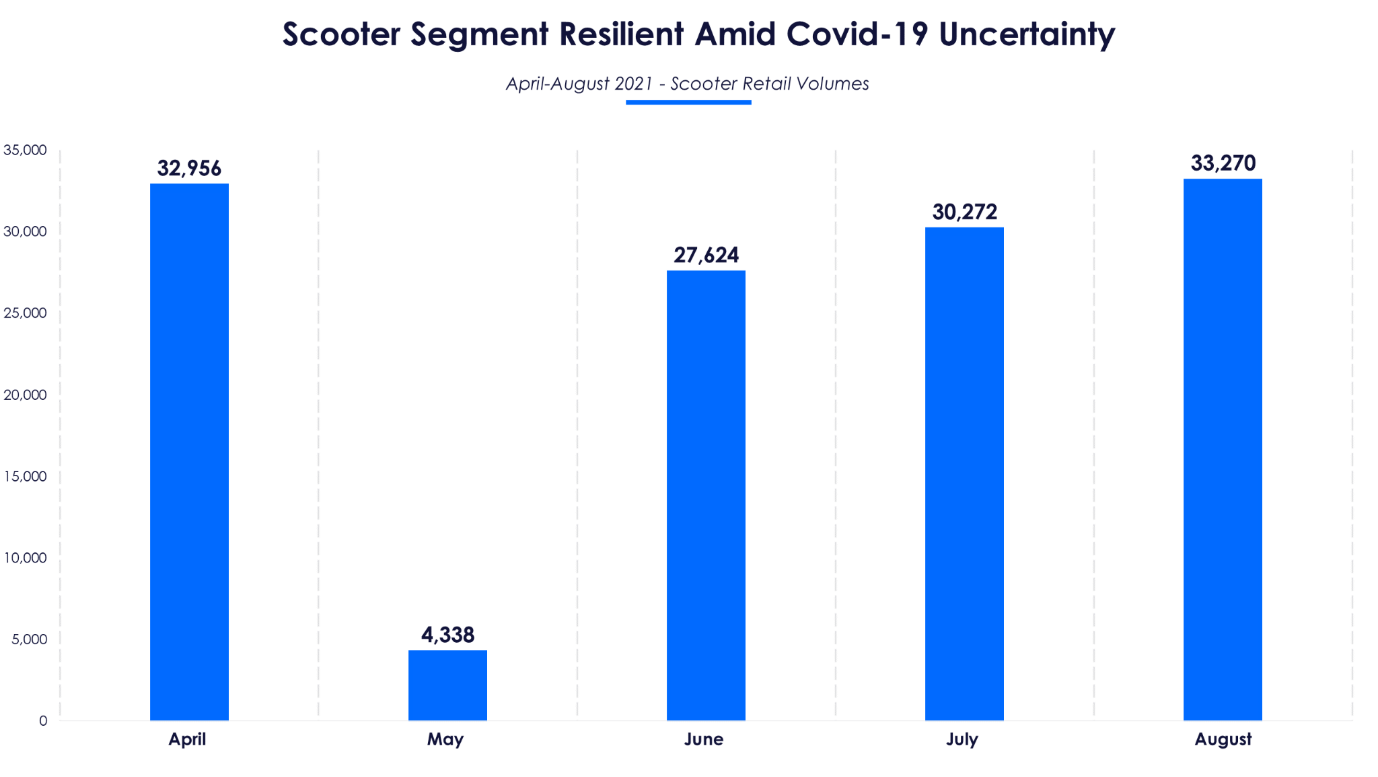 Apart from the EV growth agenda, Hero MotoCorp has set an ambitious target of achieving the next 100 million sales of motorcycles and scooters within this decade. The company achieved cumulative sales of 100 million motorcycles and scooters in FY21. And Hero MotoCorp’s 200 millionth vehicle may not be a two-wheeler!  Maybe the largest two-wheeler manufacturer in the world will unfold this new development in the next few quarters.