The old and the new drive RIL's recovery: O2C & digital businesses save Q1FY22

Over the past one month, Reliance Industries’ stock has been moving sideways. If we look at the past one year, the stock has been muted, staying just under 2,100 after it briefly rose above Rs 2,200 from September 2020 to October 2020. Ahead of the company’s annual general ...

Over the past one month, Reliance Industries’ stock has been moving sideways. If we look at the past one year, the stock has been muted, staying just under 2,100 after it briefly rose above Rs 2,200 from September 2020 to October 2020. Ahead of the company’s annual general meeting of shareholders in June 2021, Reliance Industries’ share price again flirted with Rs 2,200 levels. After that, investors’ focus shifted to the company’s Q1FY22 performance and the stock started trading below Rs 2,100 after the company announced its results on July 23, 2021.

In a quarter marred by multiple state-level lockdowns that  dented the performance of its retail business, Reliance Industries (RIL) showed a lot of resilience in Q1FY22. This came from the good performance of its O2C (oil-to-chemicals) division, which includes its refining and petrochemicals businesses. As demand for fuels and petrochemicals did not fall as much in Q1FY22 as compared to Q1FY21, and global demand supported prices and margins, the O2C segment continued to post decent quarterly results.

While unlike last year, the O2C segment’s performance wasn’t affected severely, the retail business was impacted. This led to a sequential decline in consolidated net profits in Q1FY22 and revenues, but profits were higher than Q1FY21 as lockdowns across states were not as severe. 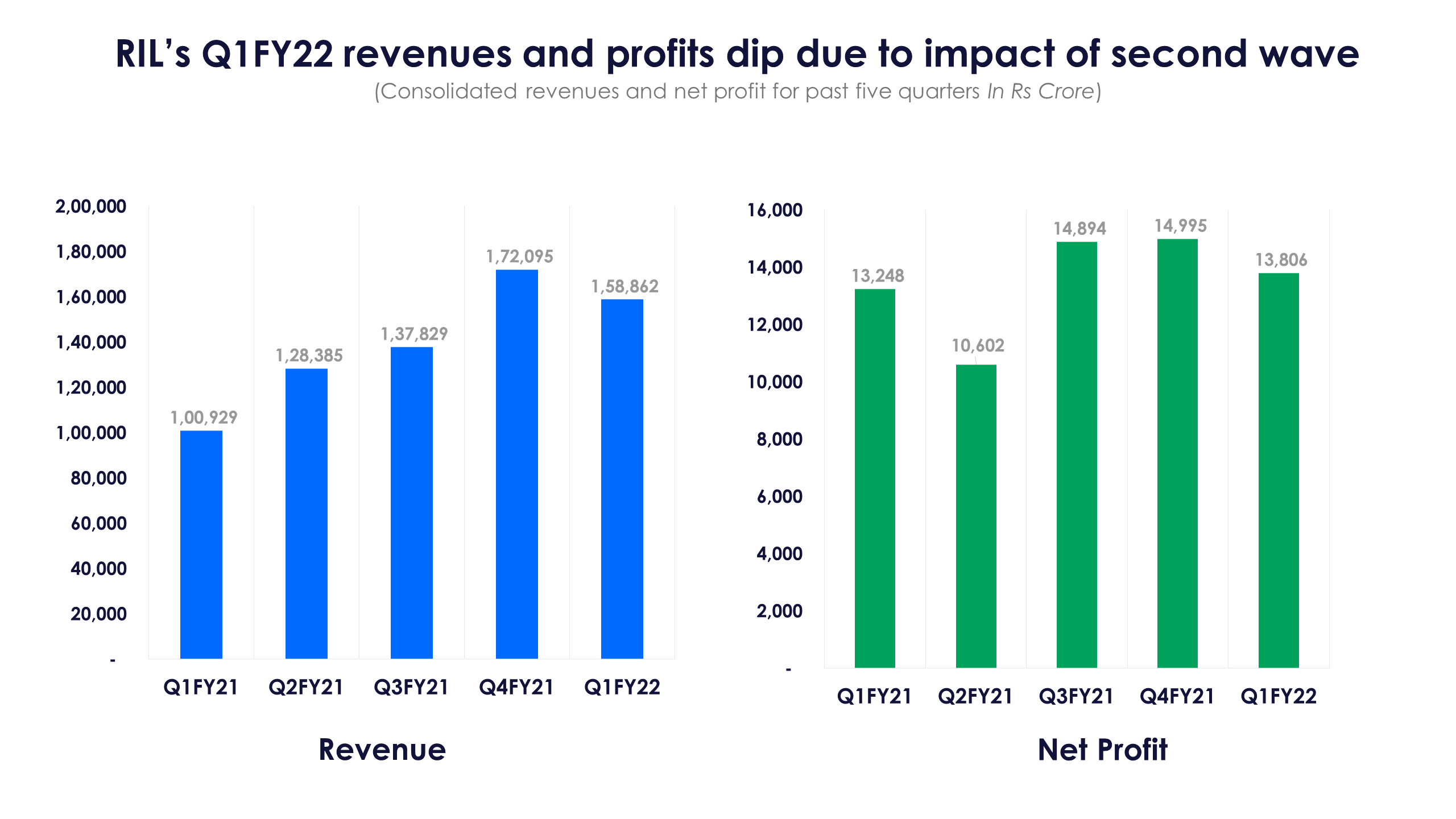 Although the company seems confident of navigating through this tough period, the movement in RIL’s stock price shows that investors are still waiting for some triggers like a pickup in its retail business, or clearer contours of how the renewable business will pan out, among others. But with the overwhelming reliance of RIL’s quarterly performance on its O2C business, the imminent duopoly in the mobile telephony industry, along with its retail business being impacted by intermittent lockdowns across states, can RIL’s shareholders find a narrative to hold on to for the future?

The rebound in economic activity helped the O2C segment’s revenues and margins rise over the past few quarters. This segment was also helped by a lower impact of the second wave of the pandemic in India. The company’s management expects demand will normalise over the next two quarters or so to sustain this recovery. 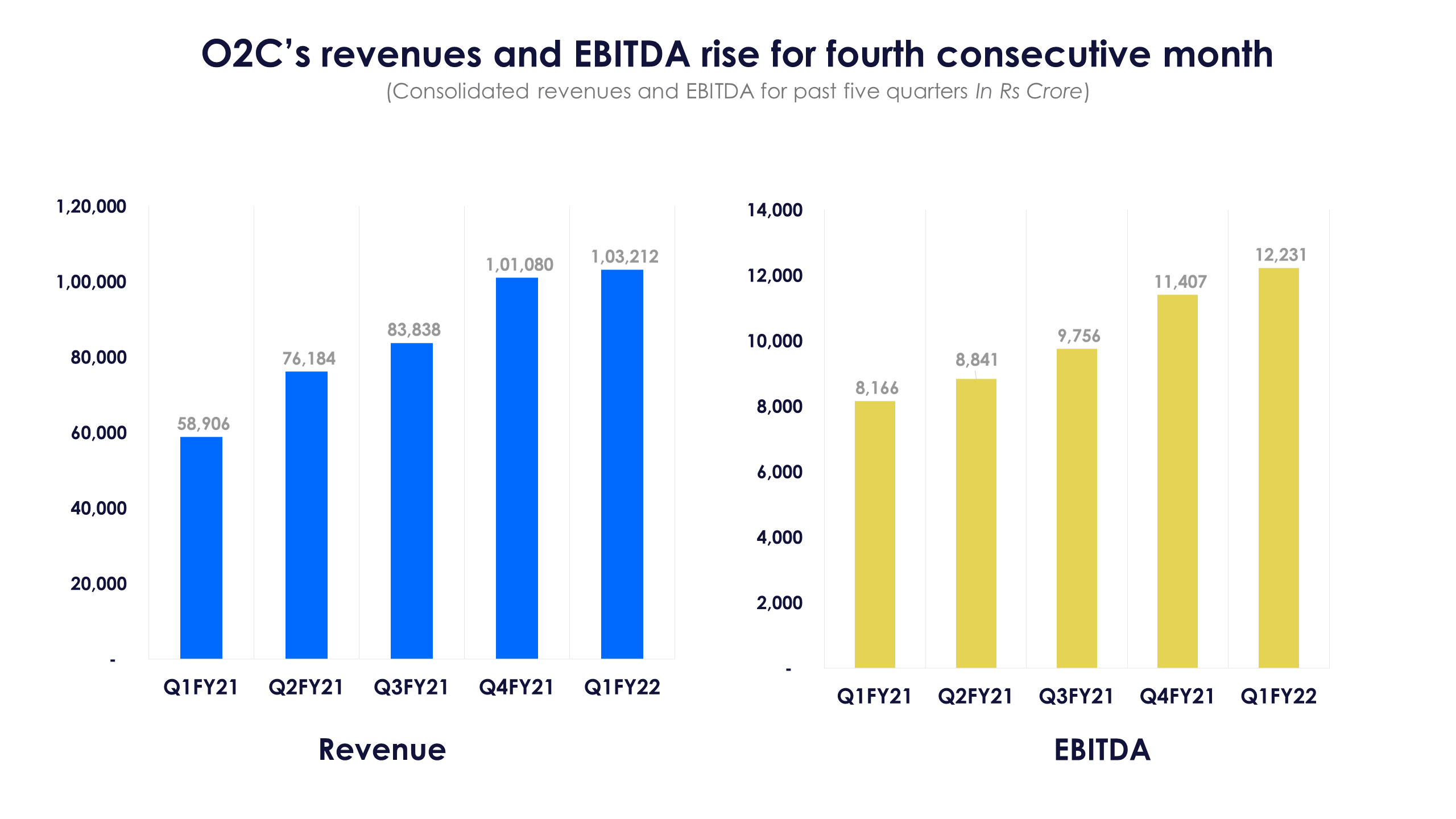 RIL reoriented the O2C business towards exports from domestic during Q1FY22 to adjust to the circumstances of the second wave. Demand for fuels dipped QoQ in Q1FY22, but it wasn’t as bad as Q1FY21, as the company says the impact was “muted”. The company is seeing strength in its downstream chemicals business.

Footfalls fell to nearly 46% during Q1FY22 compared to 88-90% in Q4FY21, just around the time when business started to normalise. However, with customers also adapting to restrictions, the grocery business was resilient, despite operating under severe restrictions. Fashion, lifestyle and electronics business also did well during the quarter. 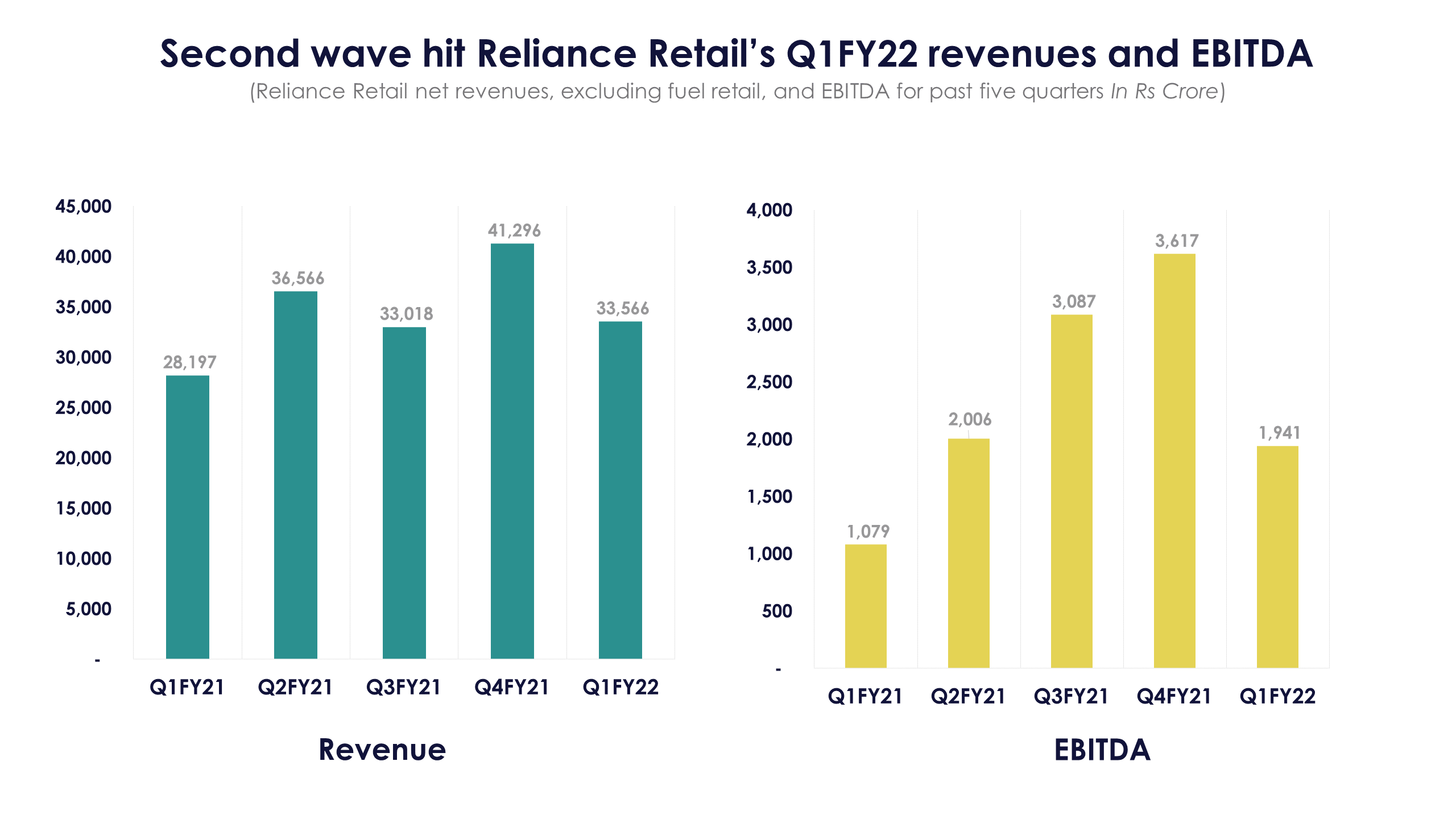 Reliance Retail’s e-commerce play helped the company post higher revenues than Q1FY21 during Q1FY22. This was helped with the ramp up of JioMart/ The fashion retail business got a boost from Reliance Trends stores being hooked up to AJIO (fashion e-commerce arm). The company said AJIO revenues in Q1FY22 was equal to the revenues it earned in the whole of FY21.

Reliance Jio added 14.3 million mobile subscribers during Q1FY22, which led to the company’s total subscribers to reach over 440 million. Average revenue per user, or ARPU came in at a stable Rs 138 on a QoQ basis. The rise in subscribers in Q1FY22 was partially due to the introduction of the new JioPhone with a bundled data and voice plan. 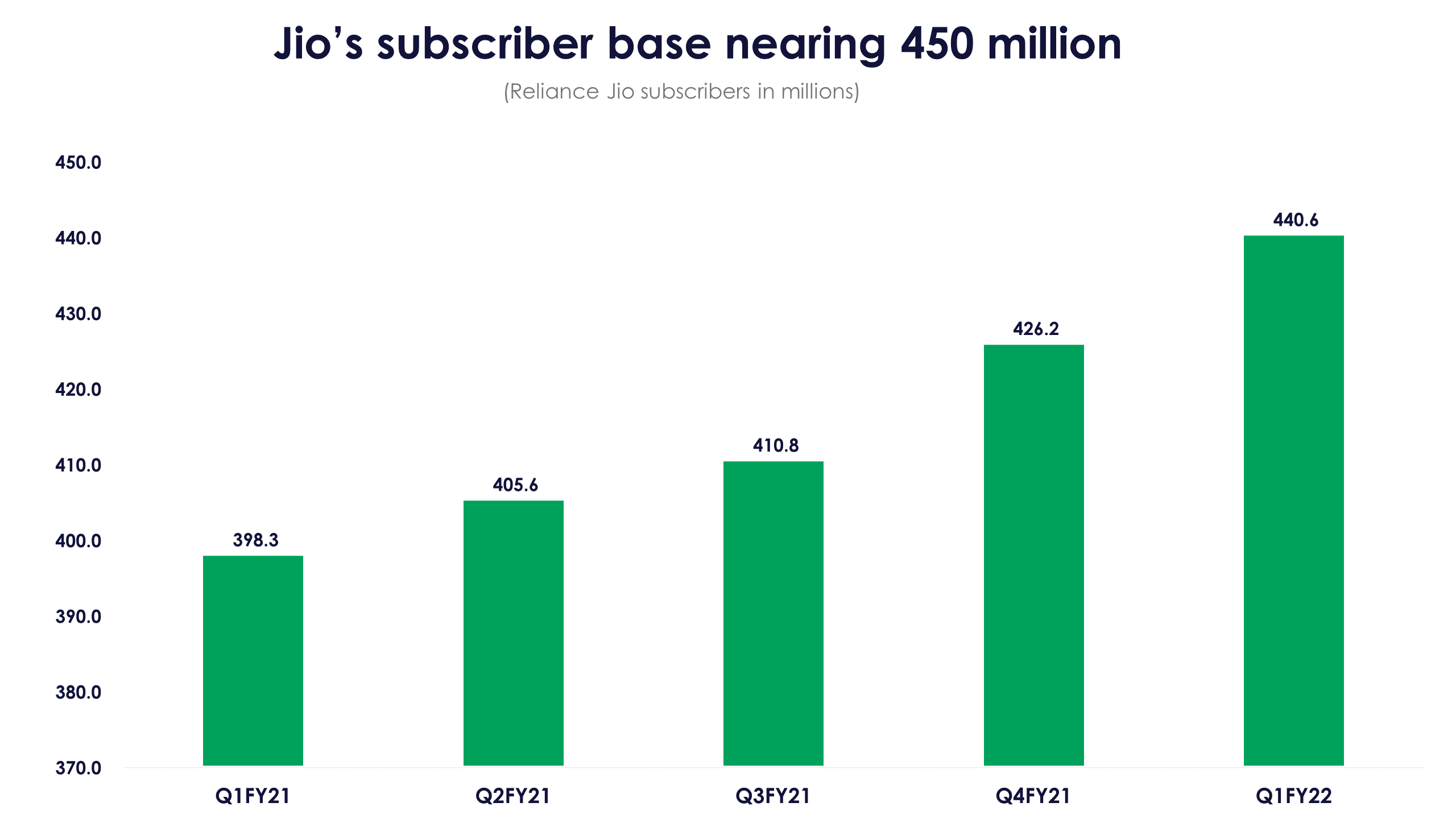 The company is also making strides in expanding JioFiber to more customers. JioFiber is currently in 3 million homes, and the company hopes to expand this base further as the second wave of the pandemic subsides. But with Covid-19 cases rising again at the end of July 2021, it will be interesting to watch this number over the next few quarters.

For now, the company has expanded JioFiber’s optical fibre cable’s reach to nearly 12 million premises. The company hopes that once the pandemic subsides, it will be able to expand and convert those in proximity of these premises into its customers. However, JioFiber’s expansion has been slow since its launch, and investors will be hoping the company is able to make some inroads in this space, especially as demand for high-speed internet connectivity is only rising.

With the impending launch of the smartphone version of JioPhone, Reliance Jio seems to be in pole position to take advantage of the weakness of one of the three remaining mobile telecoms in the market. 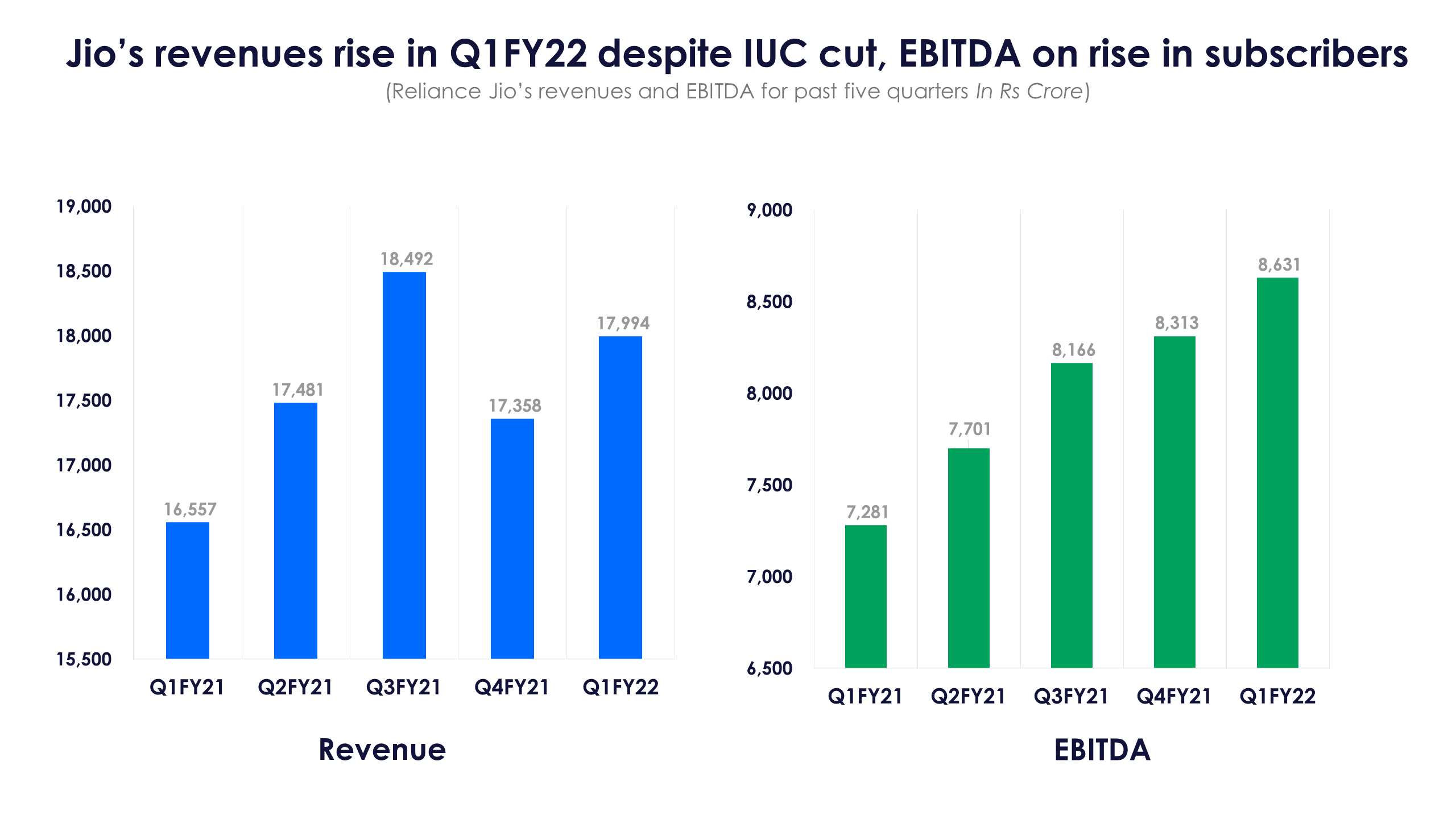 All levers in play for a flourish

Investors will be hoping that the rise in demand for fuels and petrochemicals persists, which as a result will drive profitability for the company. The overhand of lockdowns, despite RIL’s best attempts to drive its e-commerce penetration through omni-channel operations, will still impinge on the retail business. The low-margin nature of the retail business means volumes have to be higher for the company to generate higher profits. 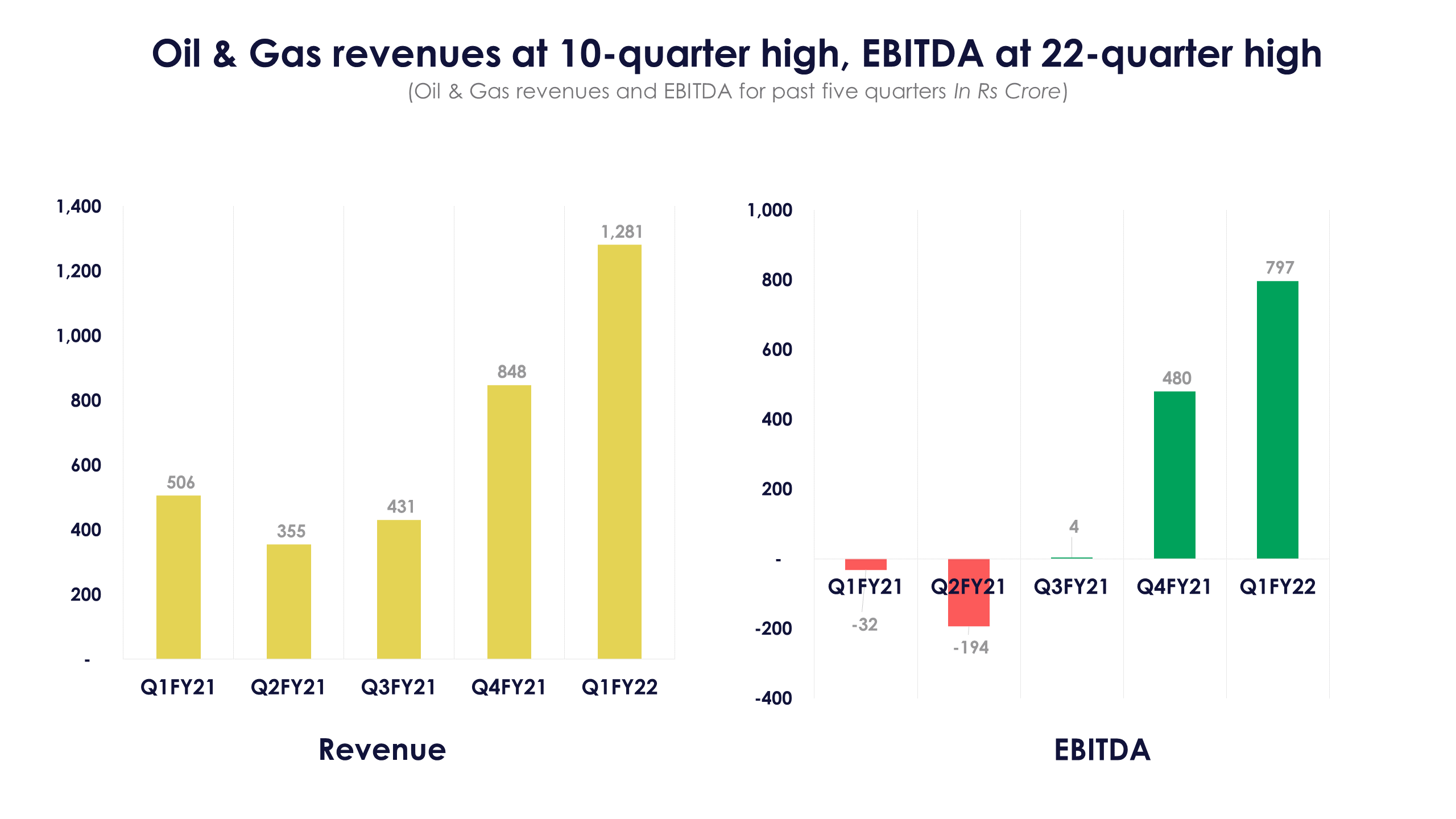 The rising production from the company’s gas fields right when the global natural gas market is seeing tight supply (and higher prices), bodes well for RIL’s oil and gas business. After floundering for a few years, it appears that this segment is poised to add to RIL’s bottom line.

RIL is adapting to circumstances to deliver a decent performance in an adverse economic environment. The hope for investors is that as the economic environment normalises, the RIL stock will shine as other businesses like retail flourish. But seeing how the pandemic is not going away any time soon, a ‘normal’ economic environment seems a mirage at this point in time. For now, investors will hope for clarity in RIL’s monetisation of its O2C and mobile telephony  business, and on the future roadmap for investment in the renewable energy space.