As the economy unlocks, questions arise as to which industries will rebound sharply with the economy recovering. But the real question should be - how much of this is already priced in? In this week’s Analyticks we discuss:

Is the recovery already priced into current valuations of restaurant operators?

An industry especially excited for the end of lockdowns is quick service restaurants (QSRs). At the end of Q4FY21, the revenues of listed QSR operators recovered past pre-Covid levels. This includes  Jubilant Foodworks, the franchise operator of Domino’s Pizza, Westlife Development, the franchise operator of McDonald’s in south and west India, Burger King India (Burger King), and Barbeque Nation Hospitality (Barbeque Nation).

The December quarter is a historically strong quarter due to the festive season, with families going out and ordering in more often. However, Q3FY21 had two unique catalysts driving demand higher - pent-up demand as the economy unlocked, with people leaving their homes after months, and the Indian Premier League (IPL) during which many QSR companies launched delivery offers.

With lower Covid-19 cases during much of Q4FY21, over 90% of listed restaurant operators’ outlets were operational compared to 80% in the previous quarter. This helped the sales momentum of Q3FY21 continue into Q4FY21. 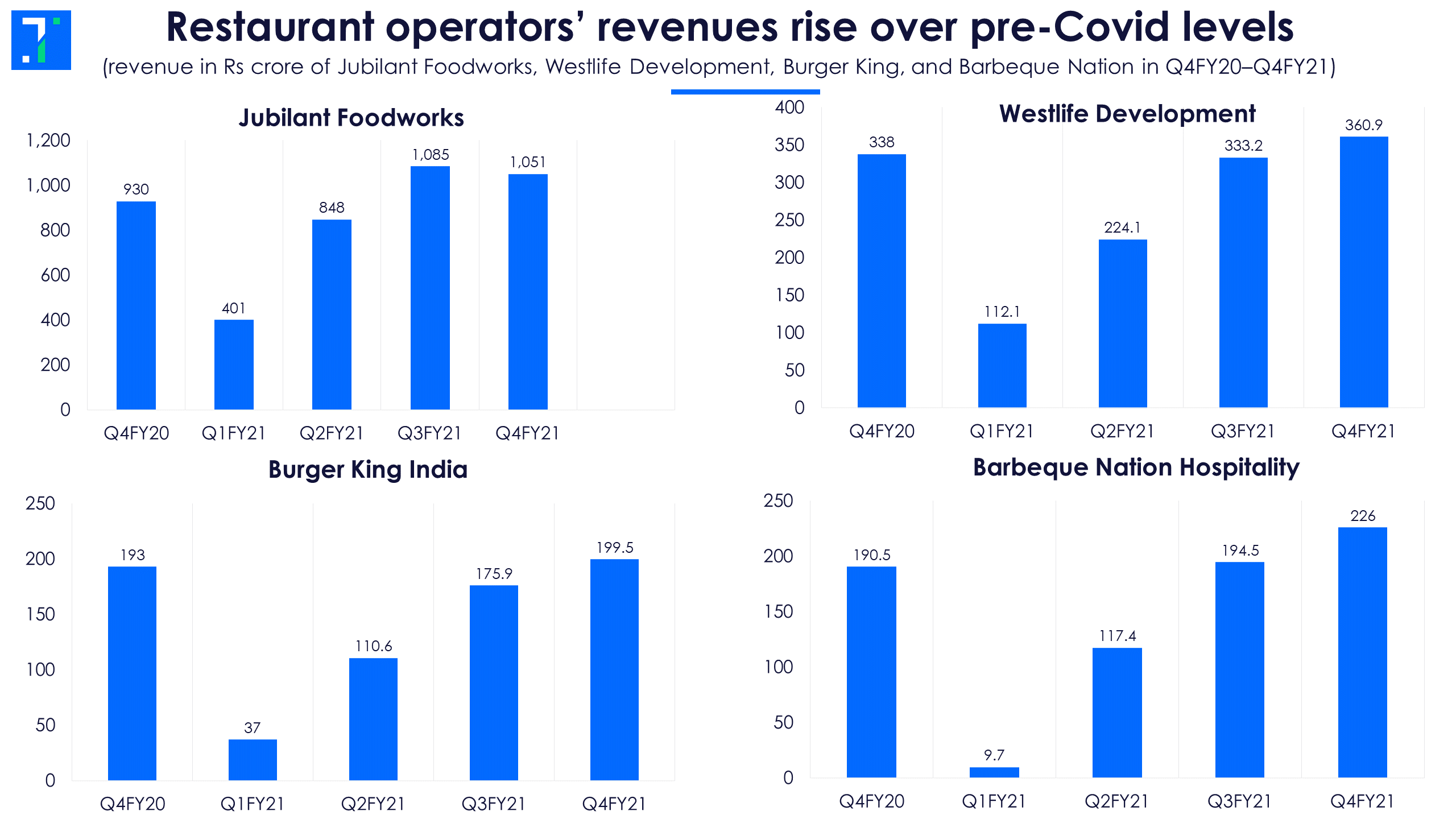 Jubilant Foodworks is the only QSR company that recorded positive earnings before interest, tax, depreciation, and amortization (EBITDA) margins in all quarters of FY21 due to higher revenues from Domino’s Pizza. Westlife Development, Burger King, and Barbeque Nation’s EBITDA margins were negative in Q1FY21 during the national lockdown, and then improved sequentially.

All four listed QSR companies’ margins declined sequentially in Q4FY21 due to rising input costs. As of May 2021, prices of raw materials like palm oil, rice bran, and liquid milk were up by 30-50% YoY, eating into margins. 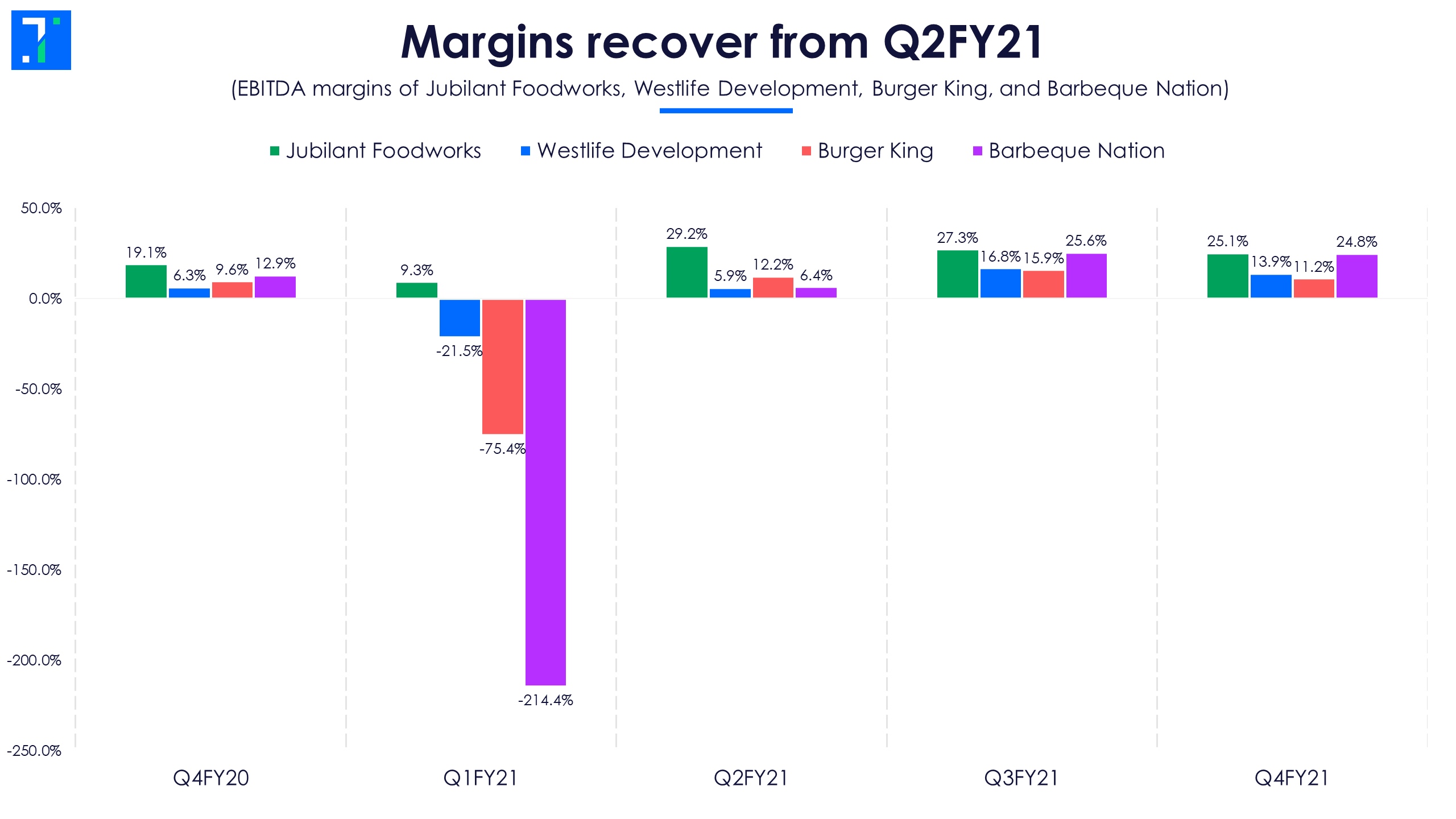 QSR companies switched distribution channels to deliveries and takeaways from dine-in during Q2FY21. Restaurants with established delivery verticals (Domino’s Pizza and McDonald’s) doubled their delivery revenues in FY21 compared to the previous year, while dine-in remained under pressure even in Q4FY21. Delivery will once again be relied on in Q1FY22 and Q2FY22 as dine-in sales will remain weak, brokerages expect.

The four quick-service restaurants look very different as far as delivery is concerned. In March 2021, when the second wave of the pandemic started, 57% of Burger King’s sales came from dine-in customers. This is because the company has a weaker delivery channel and relies on third-party delivery partners. Barbeque Nation’s delivery subsidiary UBQ is nascent, contributing less than 5% of annual revenues.

The steady growth in revenues from home deliveries of Jubilant Foodworks and Westlife Development helped its same-store sales growth (SSSG) turn positive in Q4FY21. SSSG is a key metric to track recurring revenue from restaurants. It refers to the growth in sales of a company’s restaurants which have been operational for over a year. 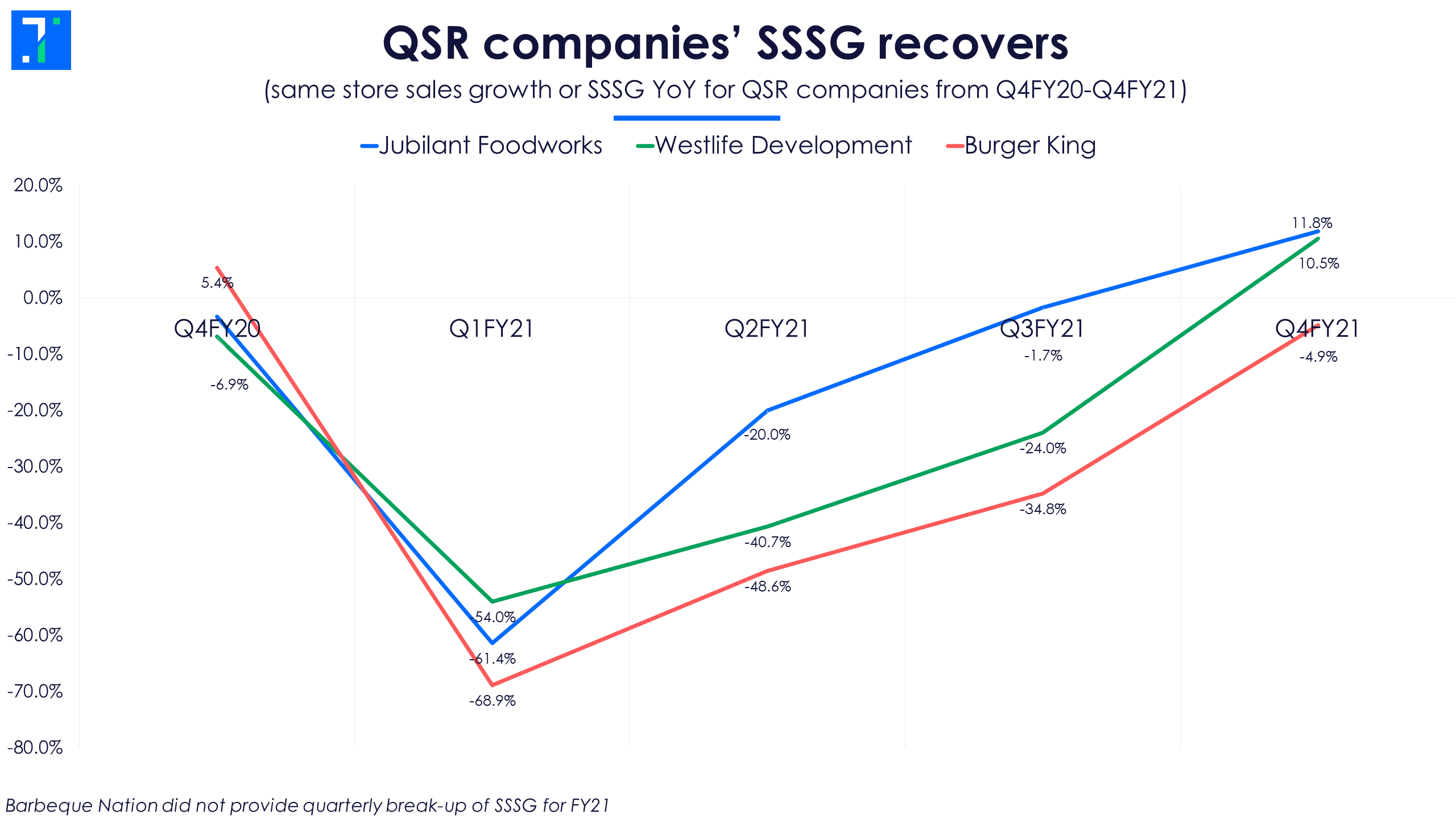 Sales at restaurants are expected to recover as the country unlocks. But with home delivery already functional amid lockdowns and dine-in still weak, it remains to be seen whether the unlocking of the economy will incrementally add to QSR companies’ revenues. That said, the market seems to be optimistic about the restaurant industry as a whole. So far in FY22, all four QSR companies have handsomely outperformed the Nifty50. Barbeque Nation, in particular, is up by 60% since it listed on April 7. With share prices soaring, none of the restaurant operators’ stocks are in the buy-zone. 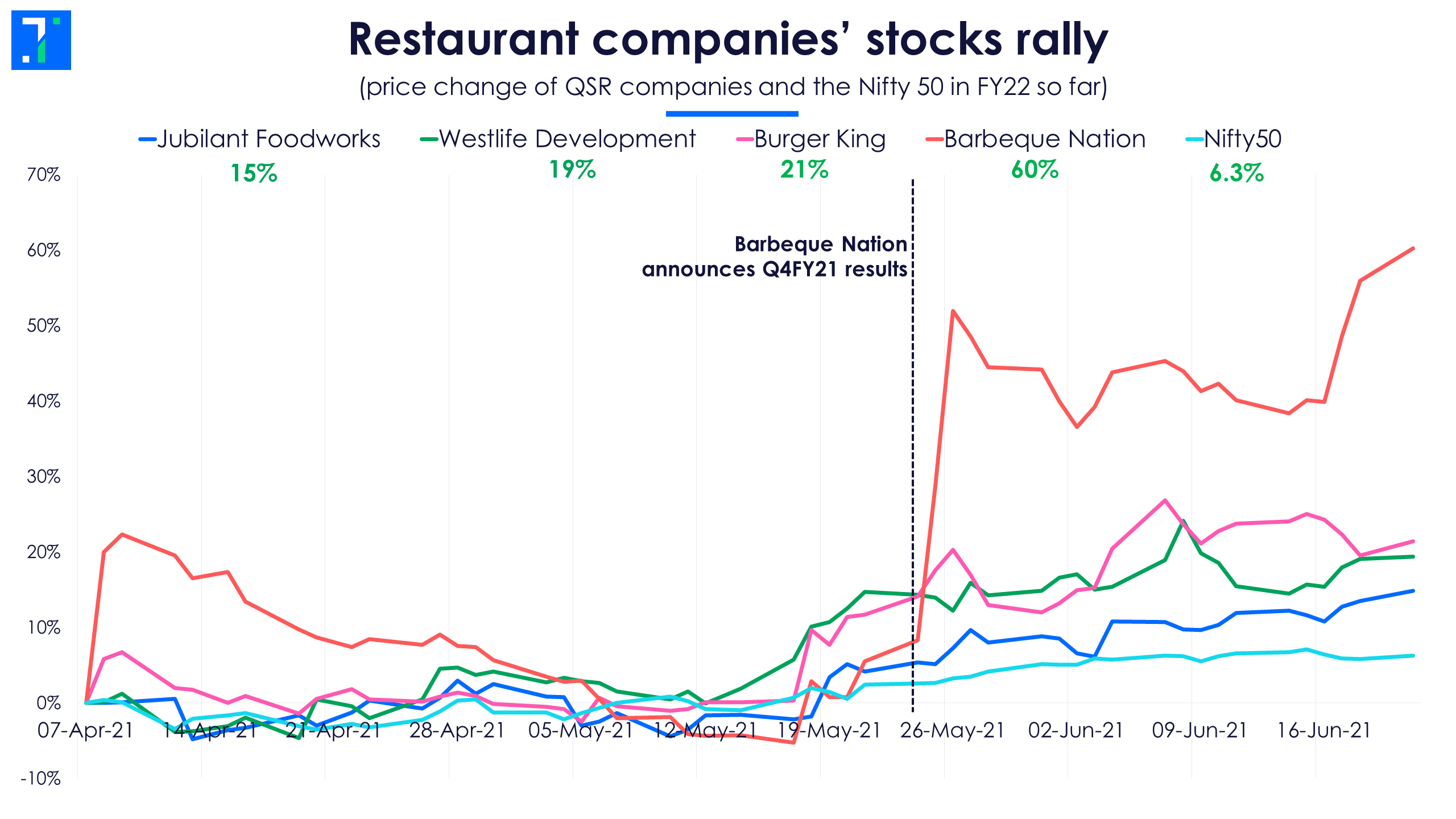 With the revival in construction activity in Q4FY21, cables and wire makers had a good quarter. One in particular is Polycab India (Polycab). The wire maker has set a bold target to triple annual revenues in five years by FY26, with the driving force behind this being not its core wire segment, but its fast-moving electrical goods segment (FMEG).

During Q4FY21, construction and infrastructure activities were in full swing, boosting Polycab’s cables and wire sales. This helped its Q4FY21 revenues jump 41% YoY to Rs 3,065 crore. Net profits rose by 32.4% to Rs 283 crore due to higher specialty cable sales. 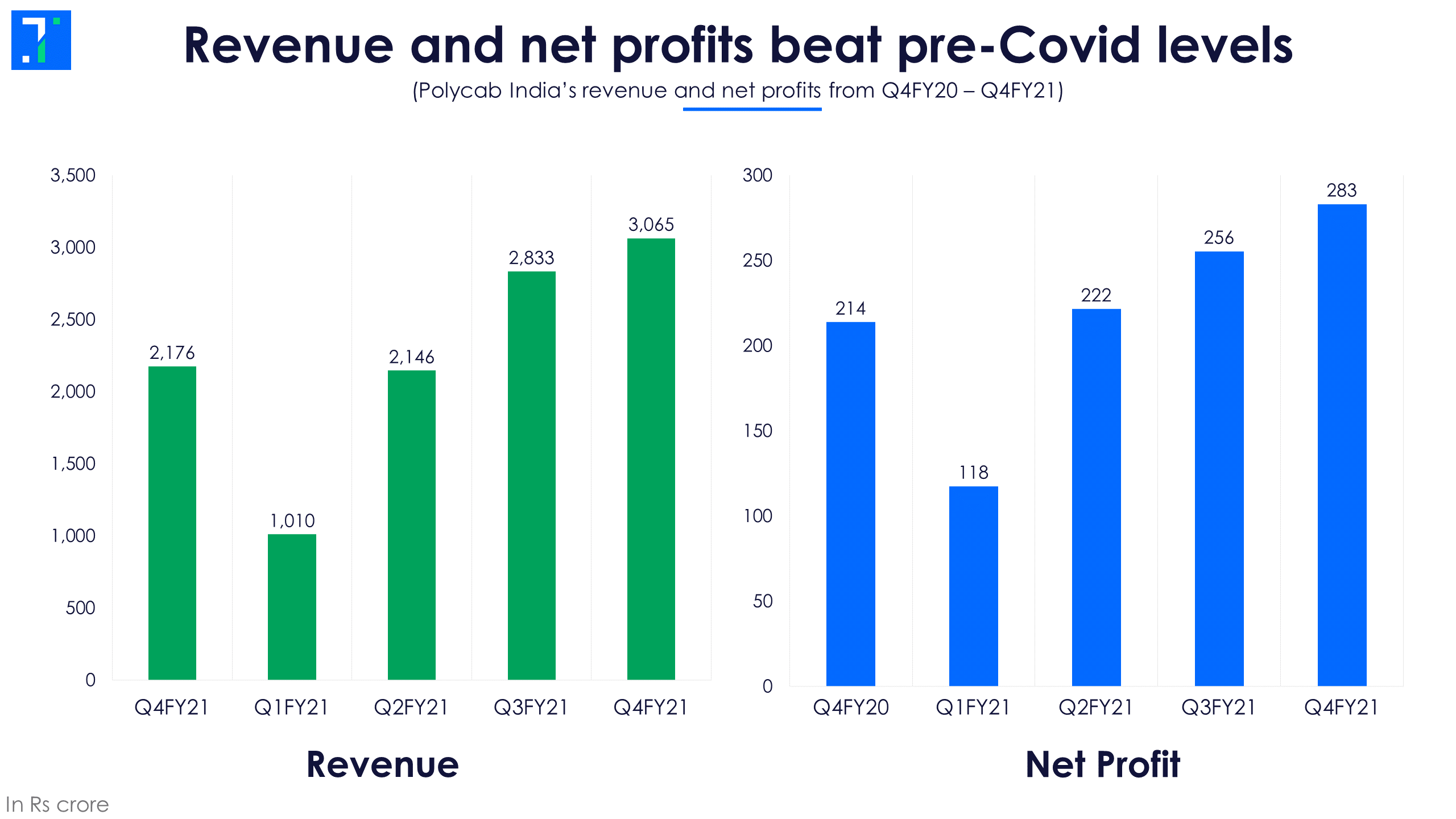 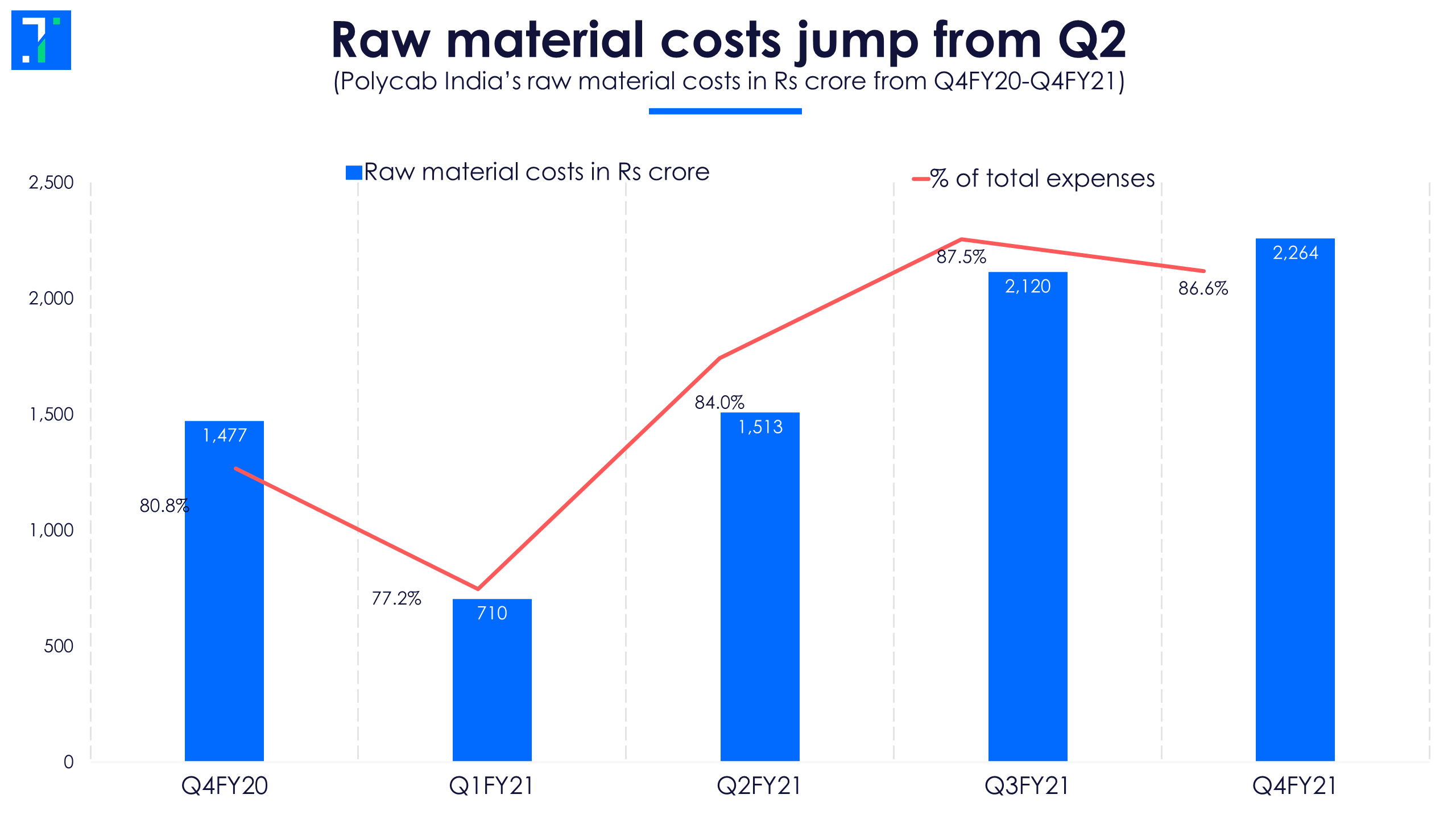 In the B2B market, Polycab makes cables and wires. These are used by the electric utility and telecommunication industries. As of March 2021, it held a 22% market share in the cables and wire market. The company also has an engineering, procurement, and construction (EPC) segment undertaking electrical wiring projects.

In 2015, Polycab diversified into B2C FMEGs like fans, lights, switchgear, etc. The FMEG segment grew at a compounded annual growth rate (CAGR) of 20.5% between FY18-21, compared to the cables and wires CAGR of 4% in the same period. 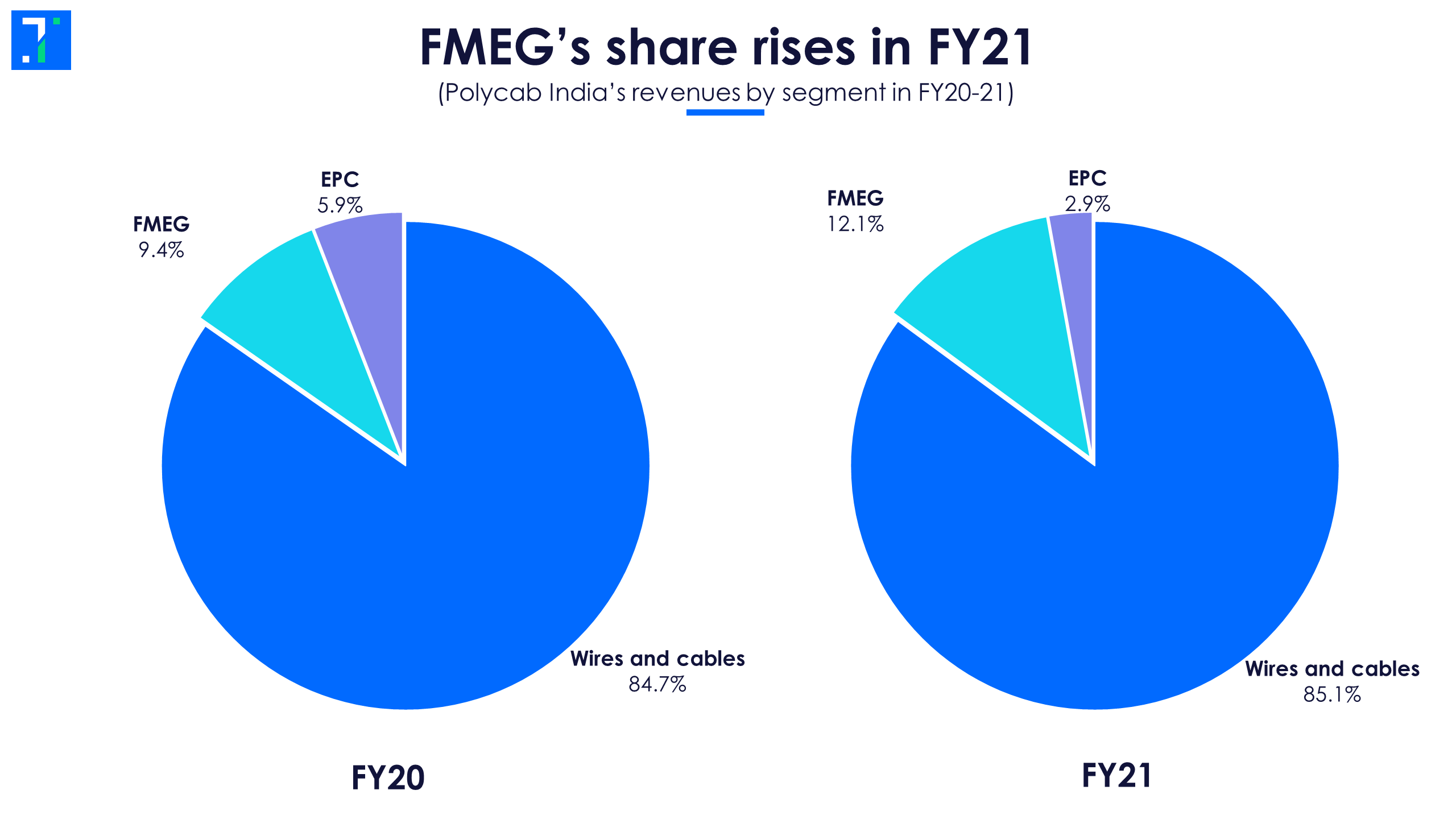 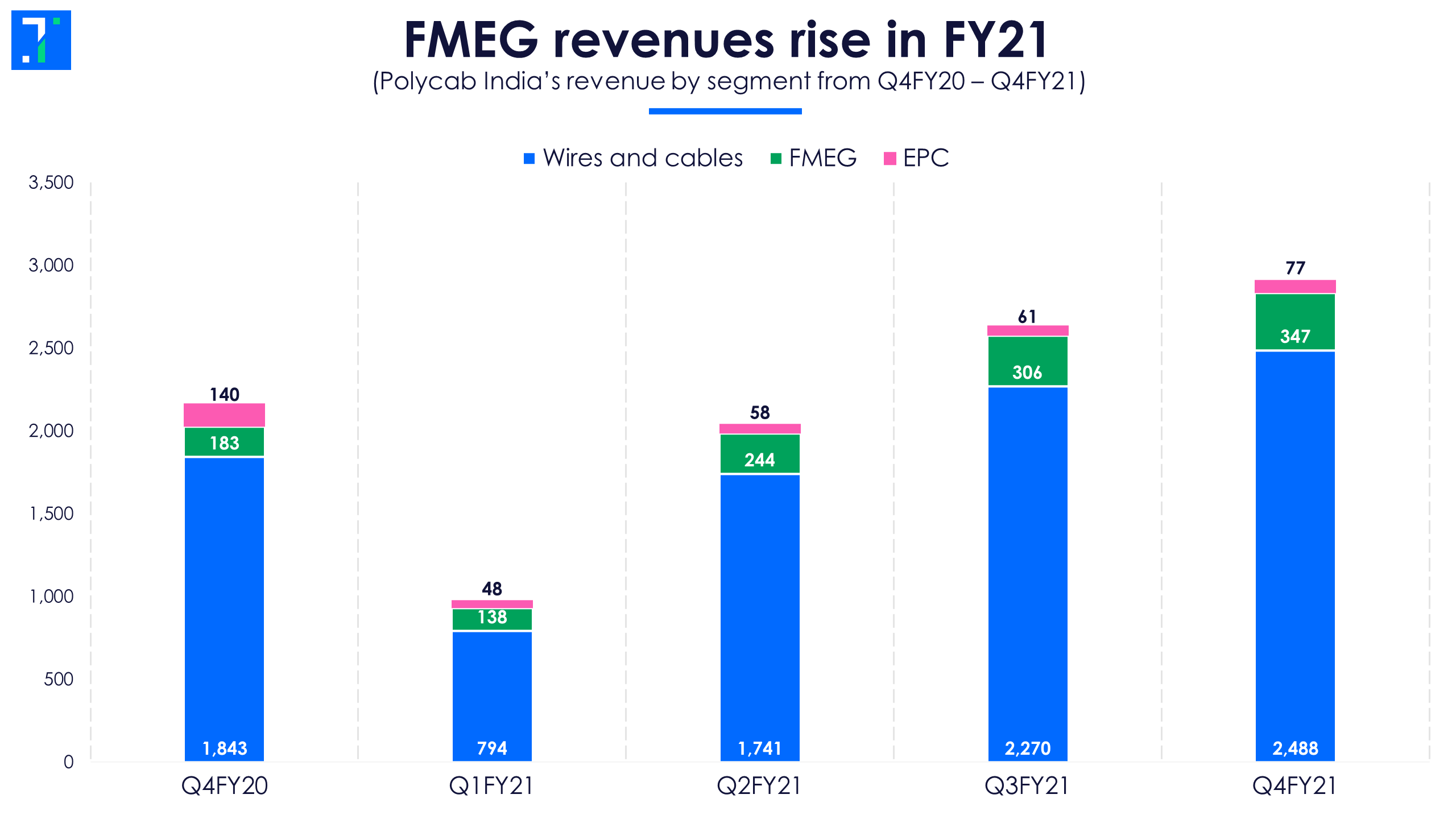 The company is hoping to achieve annual revenues of Rs 20,000 crore by FY26 (22% CAGR between FY22-26). Gandharv Tongia, the chief financial officer of Polycab said the domestic FMEG segment and exports of cables and wires will be the growth drivers to achieve this revenue target. However, with the electrical goods space occupied by Havells India, Crompton Greaves Consumer Electricals, and Bajaj Electricals, Polycab’s push into this market will be met with resistance.

On FMEGs, Polycab will focus on increasing sales of fans and lighting products. The company has outlined a capital expenditure (capex) of Rs 300 crore for FY22, a 57% increase YoY. From this capex allocation, 35% or Rs 105 crore will be spent on FMEG products, and the remaining will be spent on specialty cables, for exports. 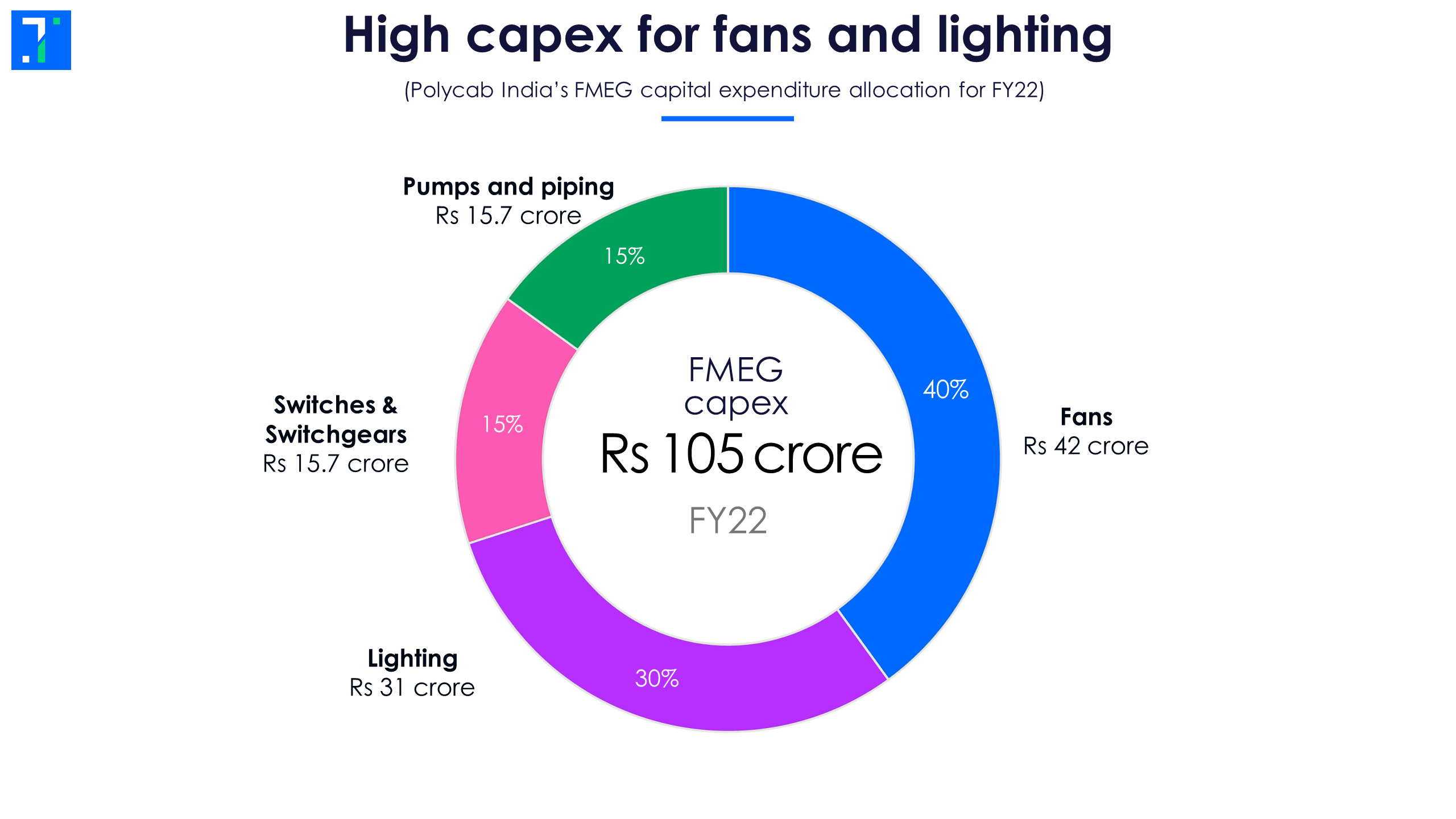 In less than six years, the FMEG segment has gone from 2% of revenue share to 12% at the end of FY21. Polycab has identified this as a key market opportunity and is looking to position itself as a consumer electronics company, according to analysts. This segment will remain under pressure during Q1FY22 due to lockdowns, but some of its retailers are delivering directly to consumers’ homes, which may soften the blow.

Beyond the second wave, the company expects a quick recovery by Q2FY22 driven by FMEG sales, which will be the key segment going forward. While the cables and wires segment is its biggest revenue generator, FMEG will drive future growth for Polycab.

With the Nifty50 turning volatile in the past few days, some stocks are losing momentum. This screener lists stocks trading with decreasing momentum. These stocks are trading above their long term 200-day and 100-day simple moving averages (SMAs), but below the short term 50-day and 30-day SMAs.

Out of the 17 companies in the shortlist, five are metal companies - Vedanta, Hindalco Industries, Hindustan Copper, JSW Steel, and Jindal Steel & Power. Due to the rapid rise in commodity prices in 2021, metal stocks have been touching new highs. However, these companies have corrected by 5-7% in the past month. 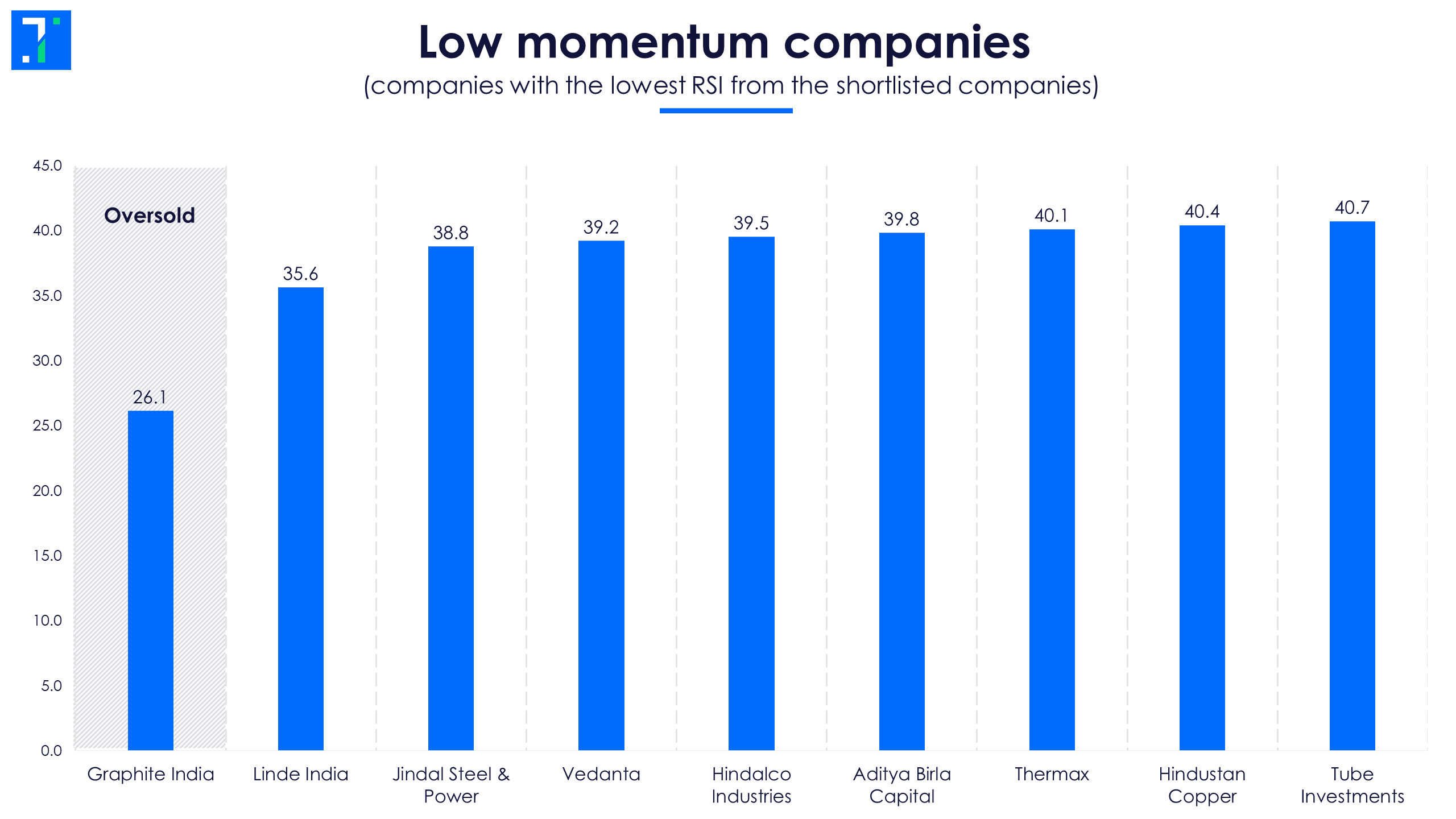 The falling momentum is pushing these stocks’ relative strength index (RSI) close to the oversold zone. From the screener’s shortlist, Graphite India, the carbon and graphite maker, had the lowest RSI at 26.1. An RSI below 30 indicates a stock is oversold, meaning these stocks have weak trading momentum and buying interest. A stock’s momentum based on technical indicators can be gleaned from the Trendlyne Momentum Score. These stocks have an average Trendlyne Momentum score of 55.

You can screen stocks based on the technical indicators here.

This content is part of Trendlyne's weekly Analyticks newsletters. To get them in your inbox, sign up here.

The Baseline | 23 Jul 2021What did Superstar Investors Jhunjhunwala, Pabrai, and Veliyath sell in Q1FY22?