Grasim Industries cuts debt, VSF and cement to steady the ship in FY22

The last financial year saw many winners and losers. On the one hand, companies in the pharmaceuticals, specialty chemicals, and packaged foods industries producing essential goods outperformed. On the other hand, cement producers, textile makers, and retail companies underperformed. A company that landed in the middle is Grasim Industries. 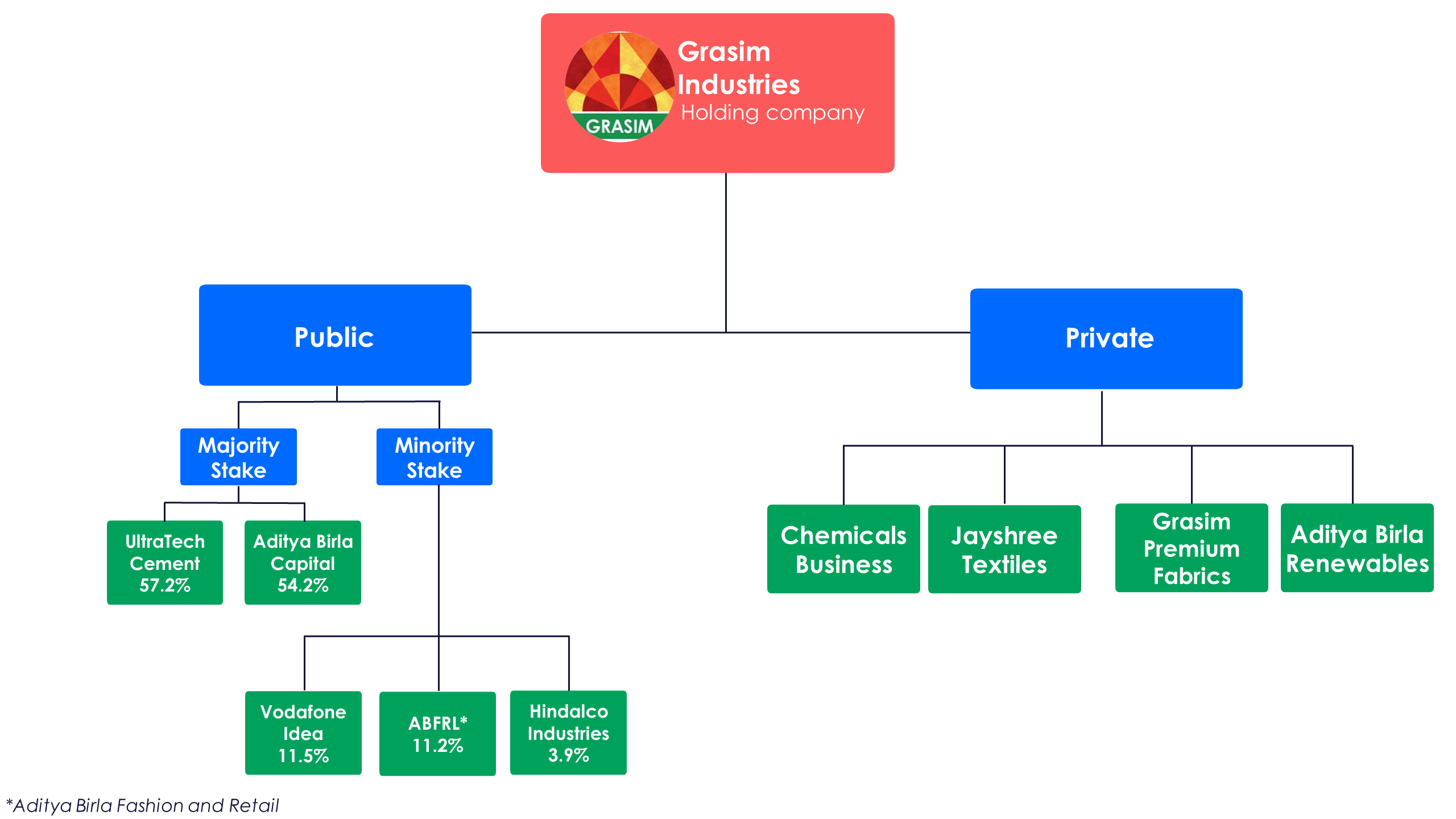 In FY21, Grasim Industries’ revenue was Rs 76,300 crore at a consolidated level. Cement and financial services, through UltraTech and Aditya Birla Capital respectively, made up 83% of annual revenue. 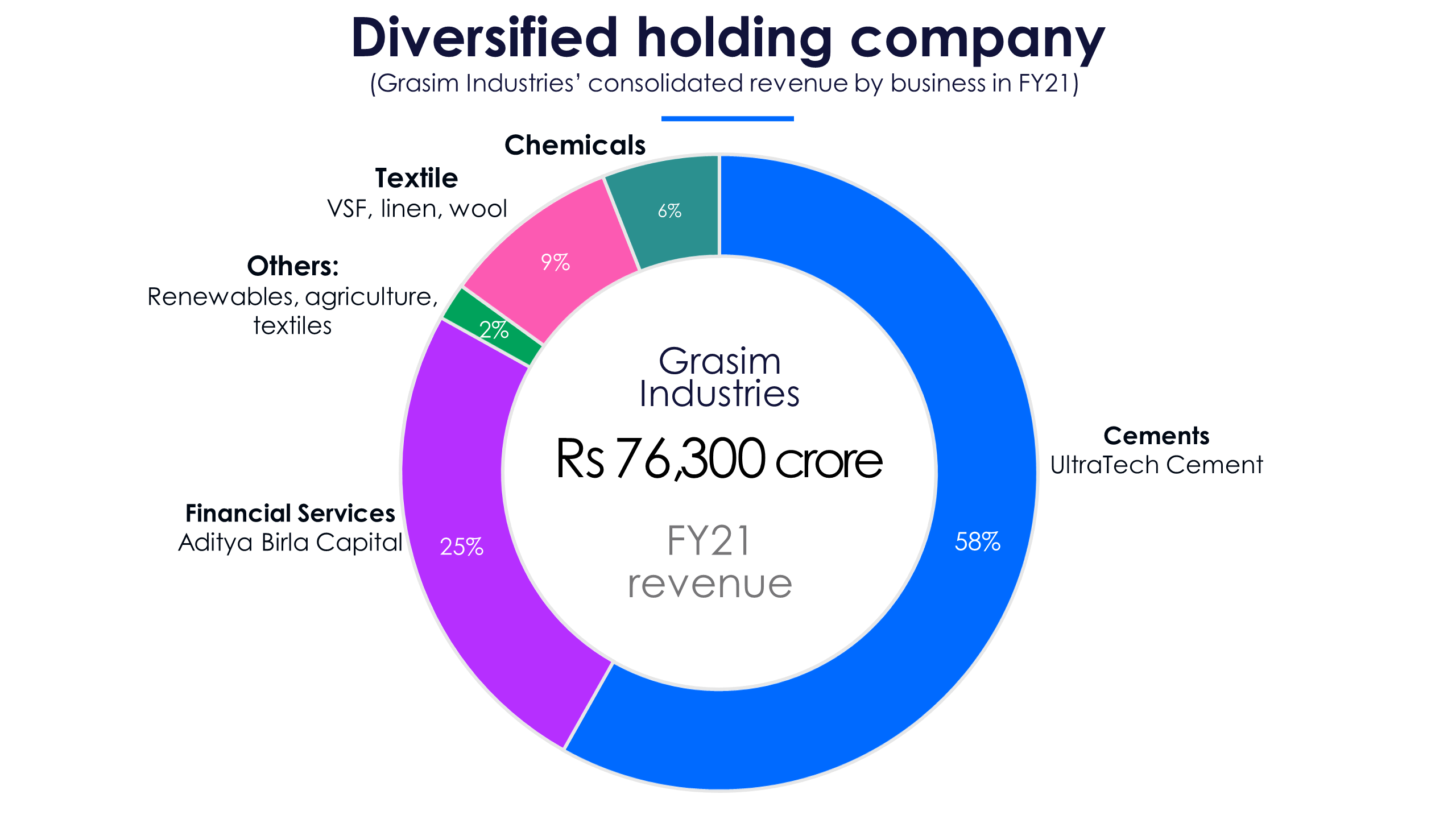 Led by a recovery in the production of VSF, Grasim’s standalone business recorded a 2% growth in revenues YoY to Rs 4,463 crore in Q4. Net profits were higher by 34% at Rs 480 crore, due to lower tax expenses in Q4FY21. 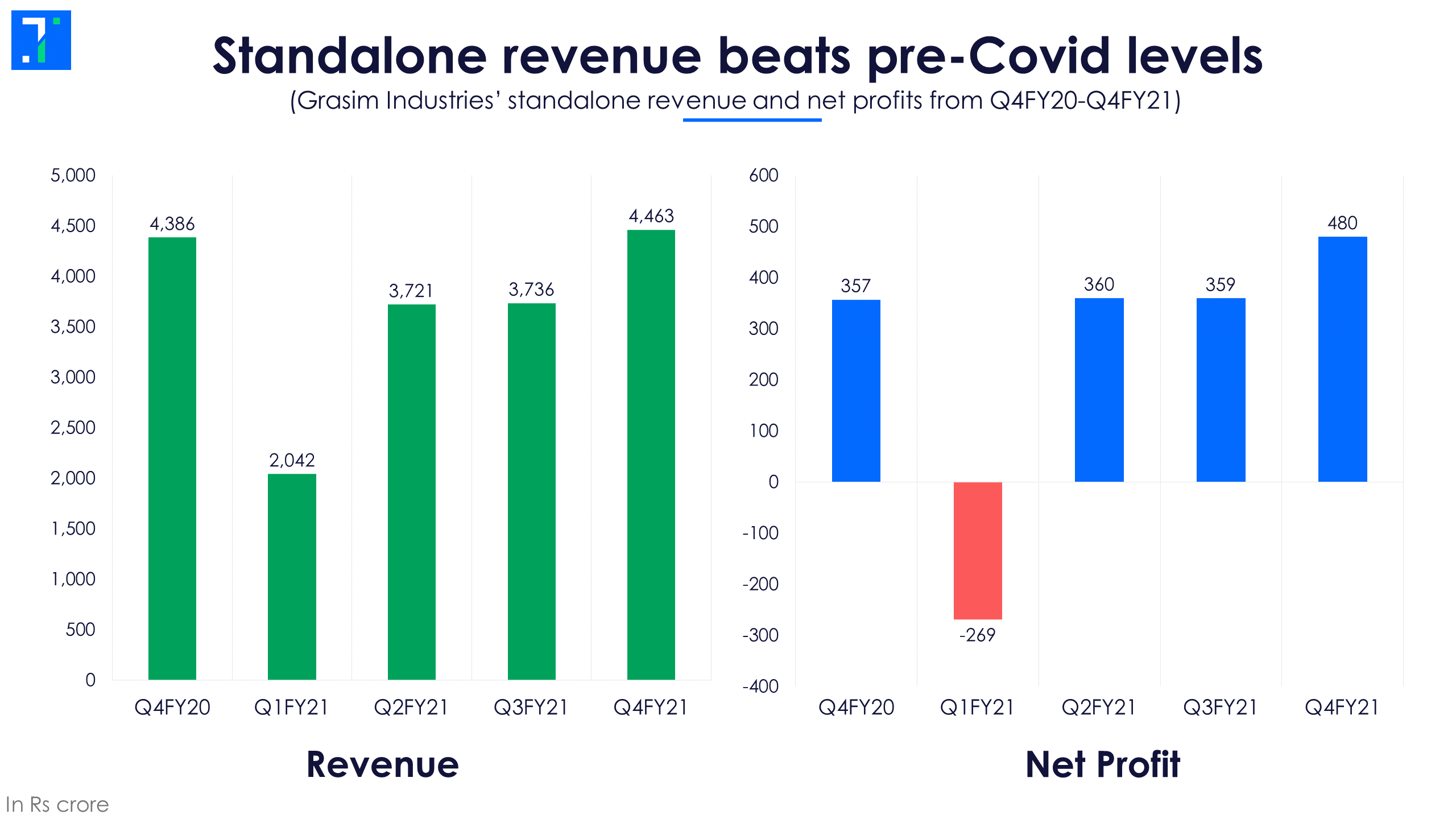 Domestic cement production recovered in October 2020 and since then it has been steadily rising. In Q4, UltraTech’s volumes grew by 30% YoY. This helped Grasim’s consolidated revenues to grow by 26% YoY to Rs 24,400 crore in Q4. Grasim’s consolidated net profits were higher by 13.3% at Rs 2,616 crore. 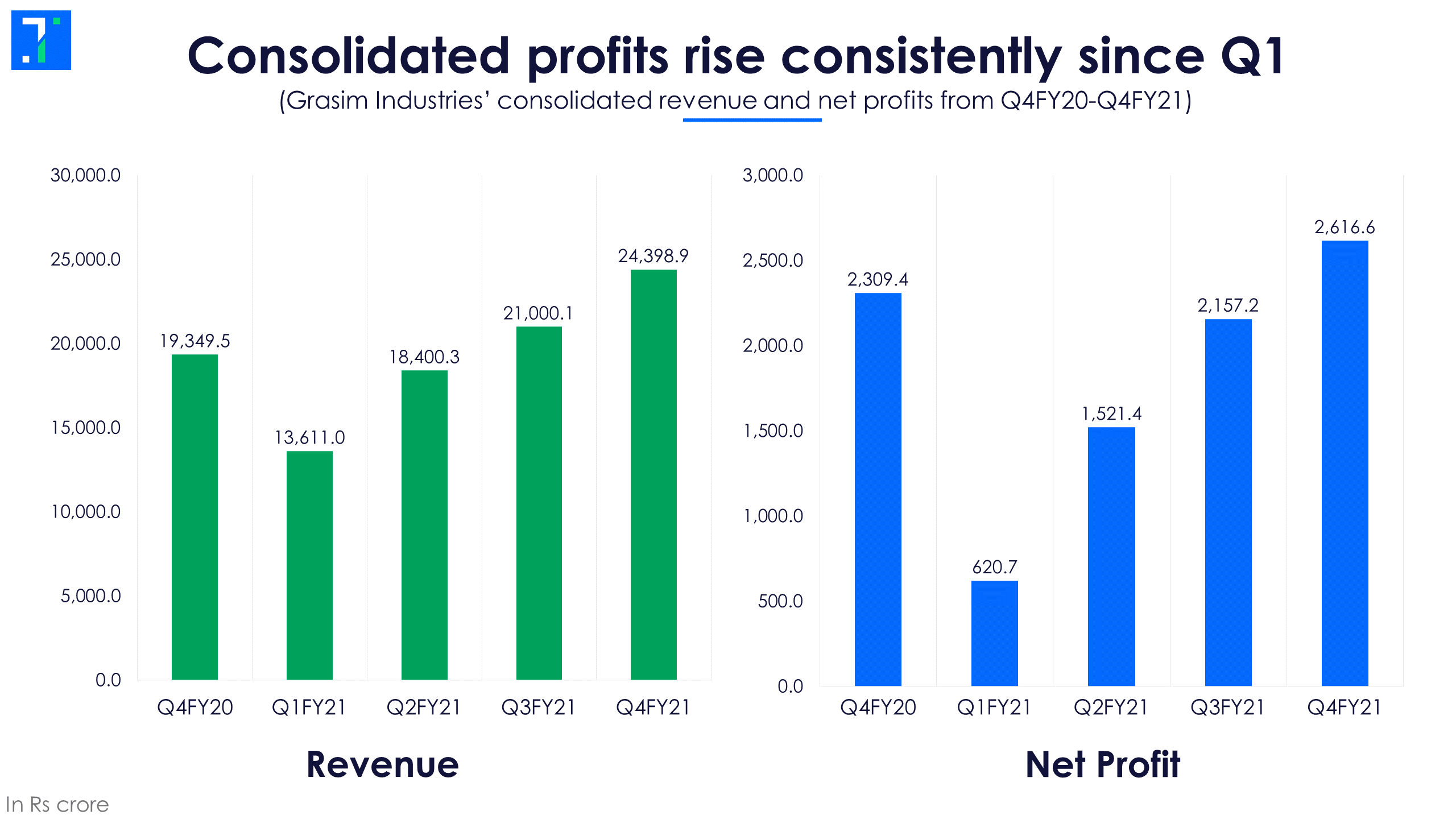 In Q1, Grasim recorded a Rs 145 crore operating loss on a standalone basis. This was because VSF, linen and wool mills and chemical factories were closed in April and May 2020. Since then revenues and net profits grew steadily sequentially. The standalone business’ EBITDA margins in Q4 were 19.6%, rising 8.8 percentage points YoY and the consolidated business’ margins in Q4 were 21.2%, an 11.2 percentage points rise. 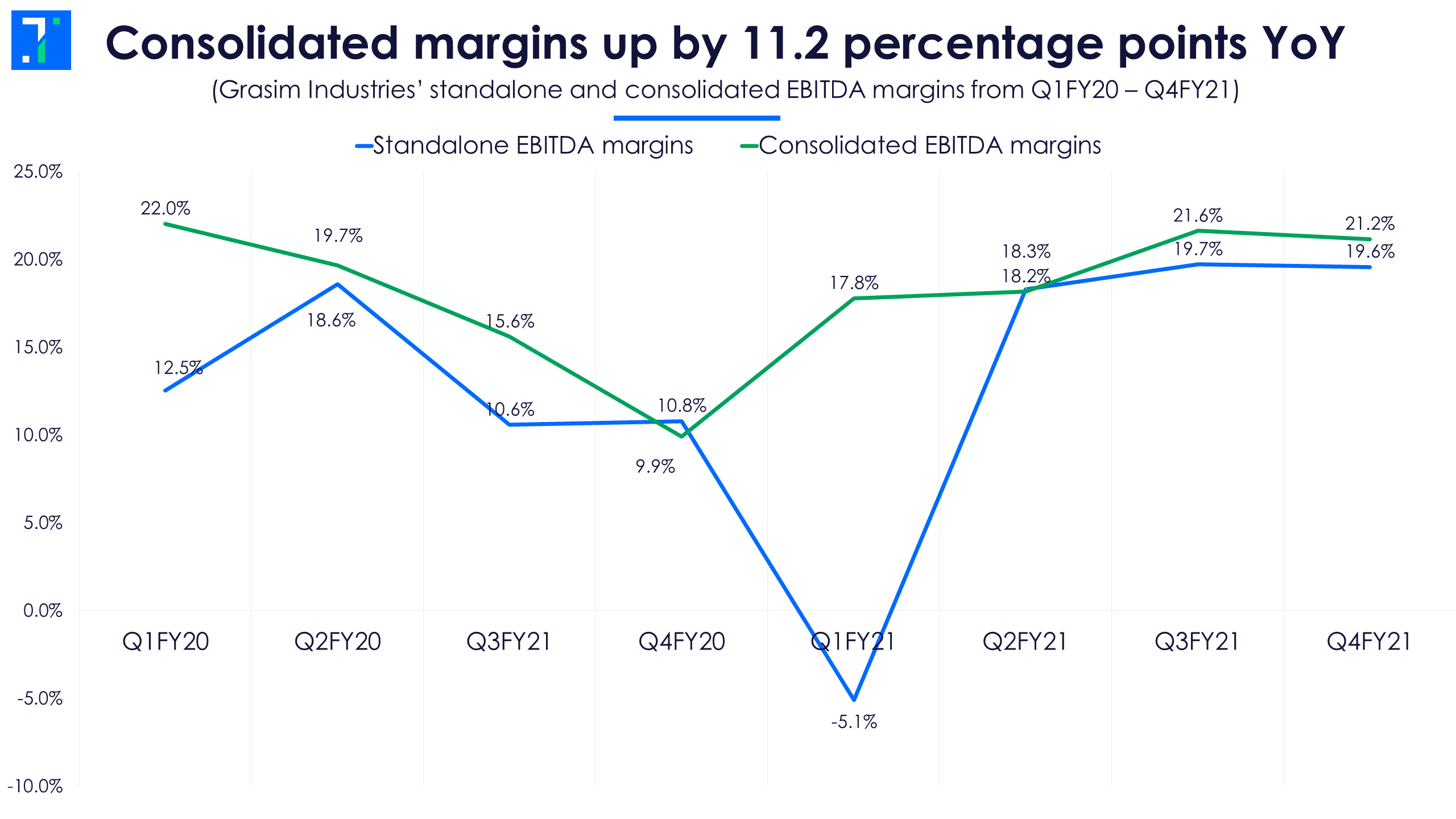 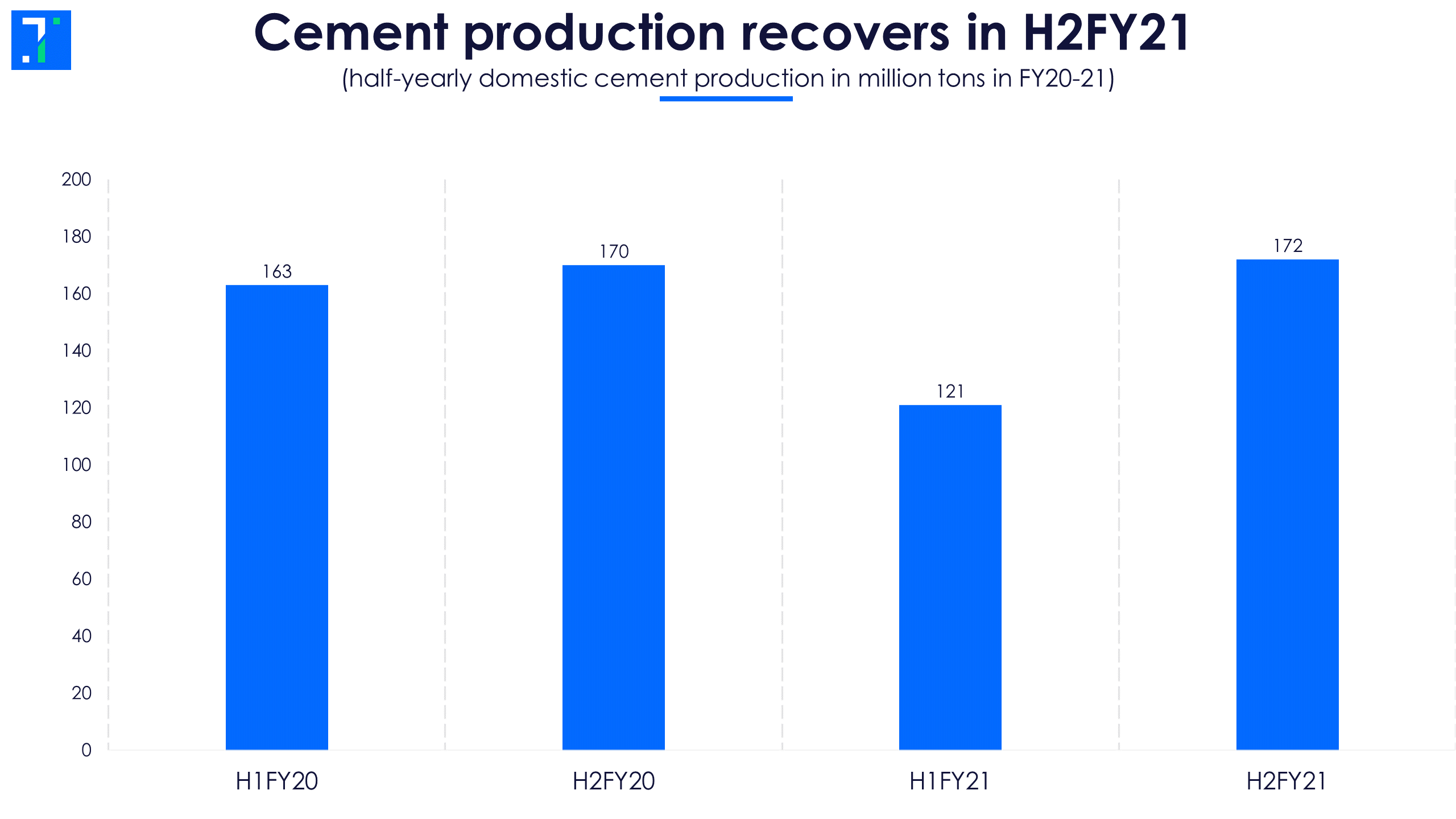 The growth in cement production across the industry, and with respect to UltraTech in H2FY21, was due to two reasons. First, the operating capacity of cement companies rose to 70-80% in Q3FY21. UltraTech maintained an operating capacity of 85% in December 2020. Second, the demand from the housing and infrastructure sector increased from Q3FY21. Housing demand improved due to the festive season in Q3FY21 and the reduction in stamp duties by the Maharashtra, Karnataka, and Uttar Pradesh governments.

In Q4FY21, UltraTech’s capacity utilisation remained at 80% in January and February but dropped in March as Covid-19 cases rose. However, in Q4, realizations grew by 15% sequentially to Rs 14,130 crore. The growth in realizations helped UltraTech and as a result, Grasim’s cement business posted a 33% YoY growth in revenue to Rs 14,405 crore in Q4FY21. 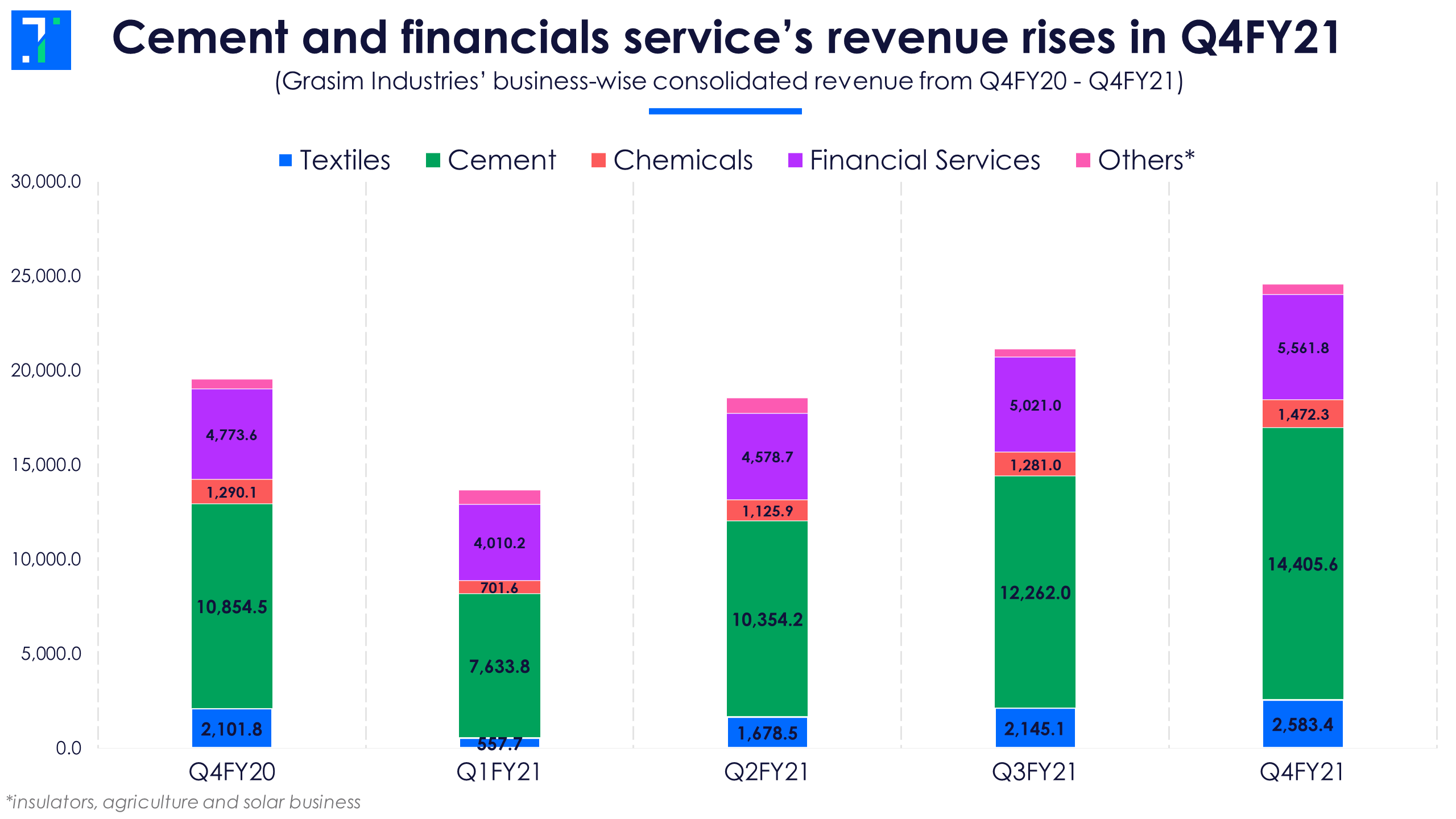 Aditya Birla Capital also reported a 17% YoY growth in revenues in Q4 to Rs 5,561 crore. This growth was led by its housing finance and insurance (life and health insurance) segments. Grasim’s consolidated revenues grew as a result by 26% YoY in Q4FY21.

In Q4FY21, on a standalone basis, the VSF business’ revenues grew by 23% YoY to Rs 2,583 crore. This was due to Grasim’s mills operating at 100% capacity in Q4. This was the second consecutive quarter with full capacity utilisation as no lockdown restrictions were present in the quarter for VSF production. 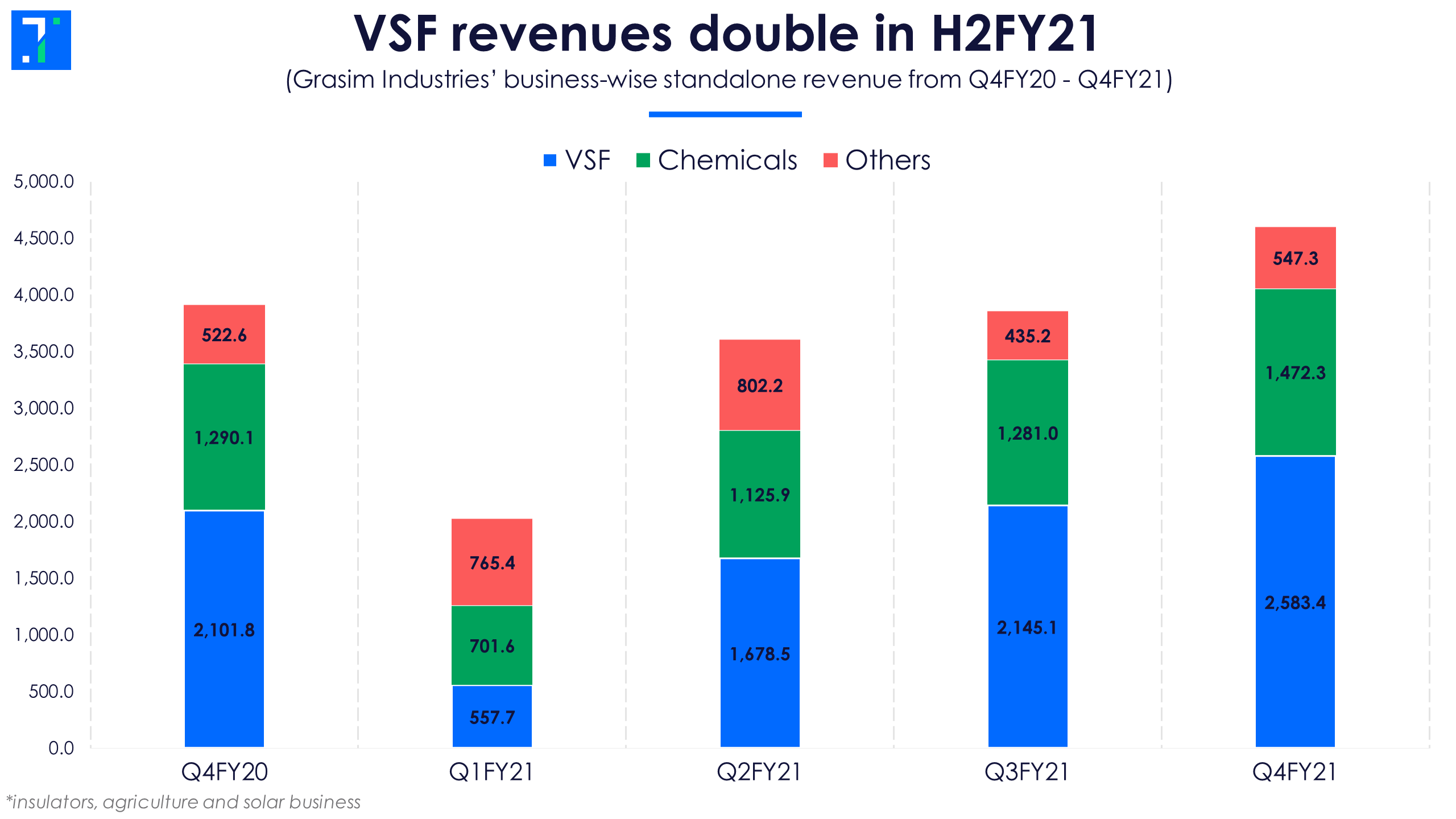 The textile industry was on course for a sharp recovery before the second wave began in April 2021. In Q1FY22, textile mills are operating at 30% capacity, with low manpower due to reverse migration of labourers and face reduced demand for textile products because of limited outdoor movement.

Grasim’s VSF volumes grew by 8% YoY even with lower operating capacity in March 2021. The market price of VSF also jumped by 16% YoY in Q4FY21. This was even higher in export markets (11% of revenue). Grasim’s VSF is in demand in China due to its cheaper price, compared to cotton. In March 2021, the price of VSF in the Chinese market was RMB 15,800 per ton (Rs 1.7 lakh), a 23% increase QoQ. The higher volume, increased prices, robust export demand, and high operating capacity resulted in a 12.9 percentage point expansion YoY in the EBITDA margins of the VSF business. 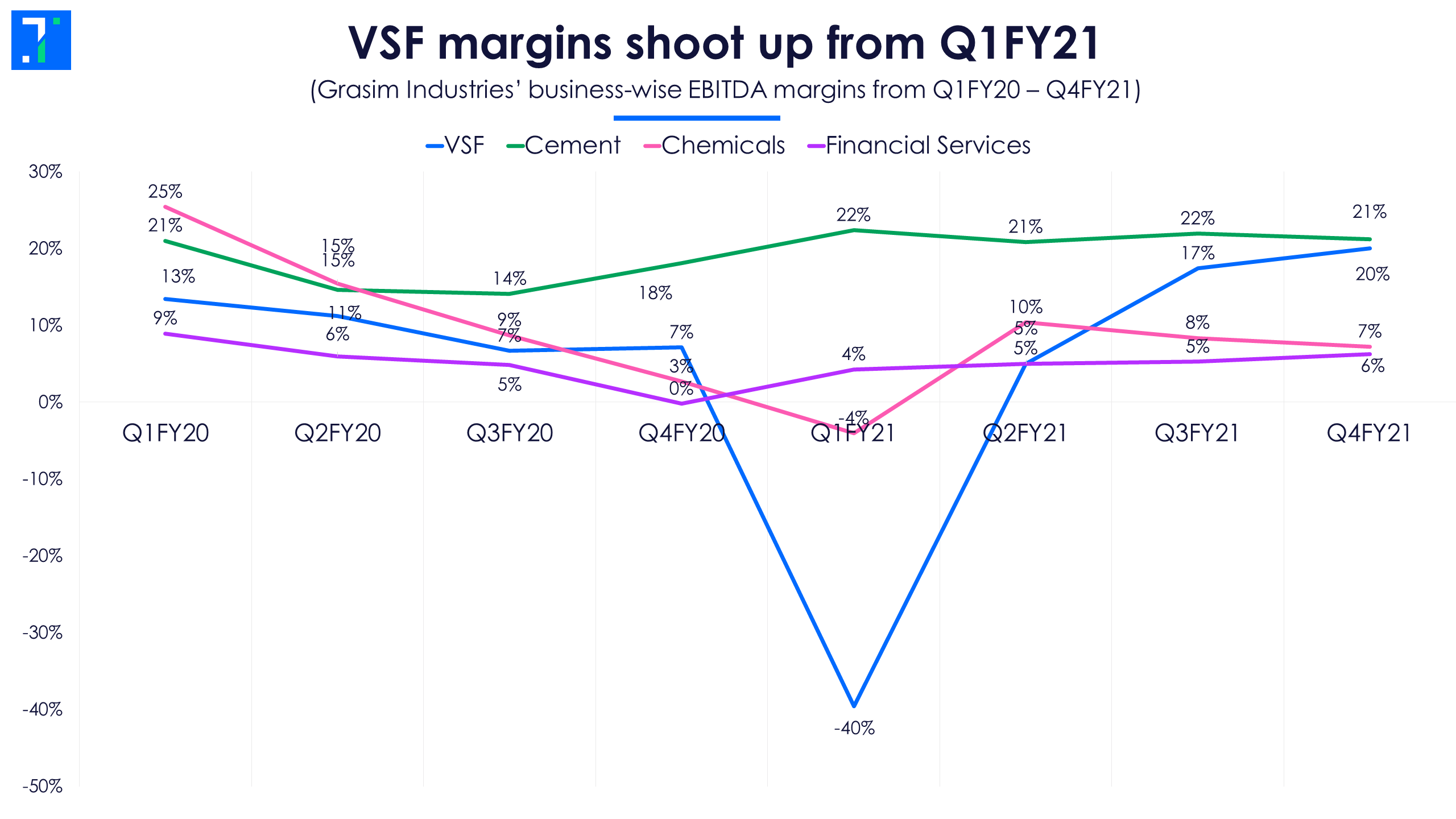 In the Q4 earnings call, the management said that this extraordinary situation for VSF will not sustain in FY22. One of the reasons for this is the increasing price of wood pulp (up by 20% in three months). However, since the company buys pulp two quarters in advance, analysts expect the high input costs to eat into Grasim’s VSF margins only from Q3FY22.

In FY22, Grasim will spend Rs 2,600 crore in capital expenditure (capex) to expand its VSF and chemicals production capacity by 38% and 33%, respectively. This is a 71% increase in annual capex from the previous year.

In January 2021, Grasim announced its intention to enter the paints business. The paints company will be housed under Grasim. The management initially outlined a capex of Rs 5,000 crore between FY22-24. However, in the Q4 earnings call, the management did not give any capex guidance for the paints foray. But the company’s increasing free cash will allow it to allocate any expected capex in paints, without taking on additional debt. 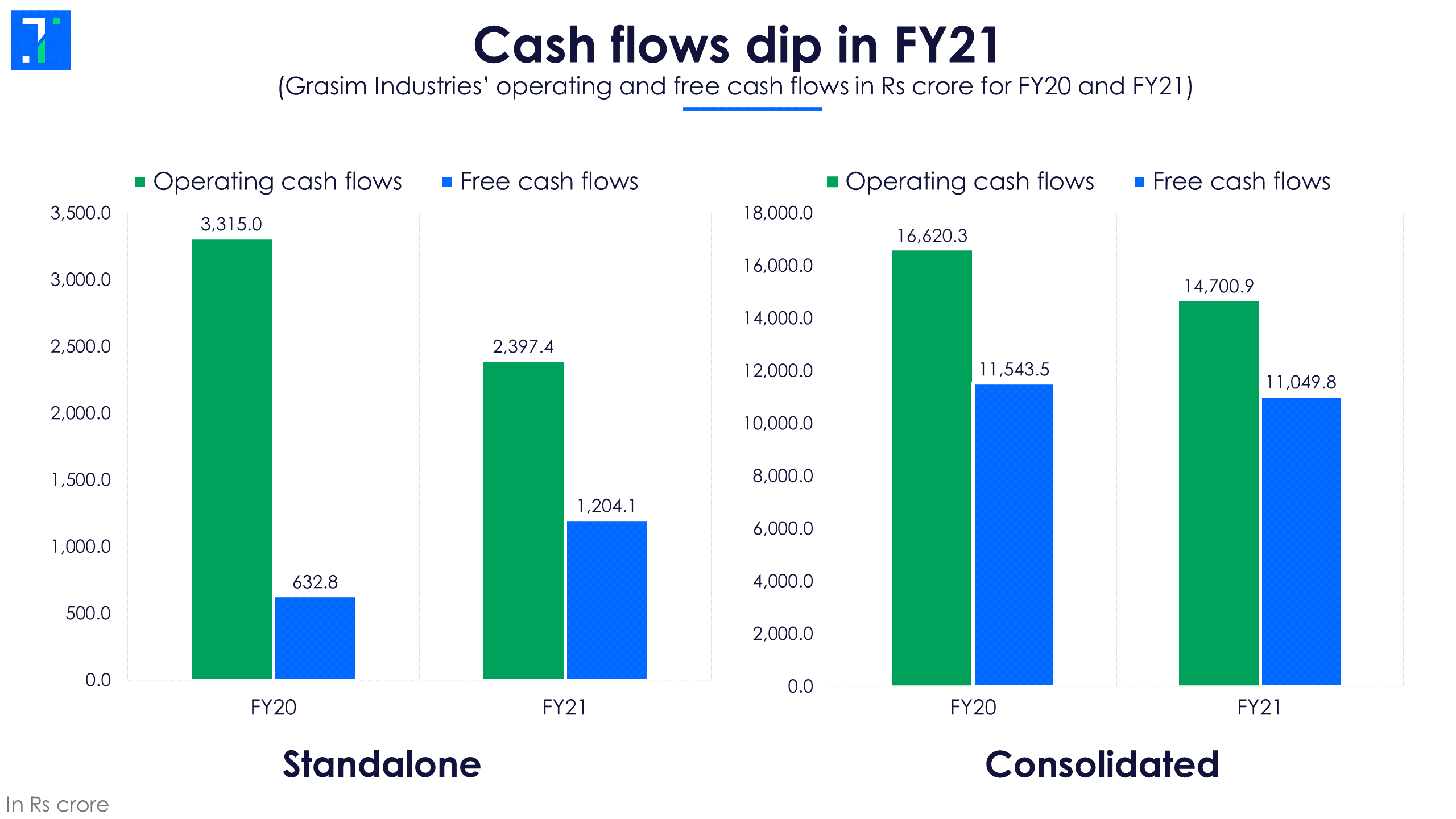 In November 2020, Grasim sold its entire stake in its subsidiary Indo Gulf Fertilizer to Indorama Group for Rs 2,650 crore. Due to the delay in regulatory approvals, the management expects the sale to be completed only by Q3FY22. At the end of FY21, Grasim’s free cash flows (on a standalone basis), despite not completing the fertilizer sale, rose two-fold YoY to Rs 1,200 crore.

In FY21, UltraTech’s capex was limited to Rs 1,200 crore for maintenance of factories. Due to declining production and demand in H1FY21, all planned capex was moved forward to FY22. In FY22, UltraTech will spend Rs 5,000 crore in capex. 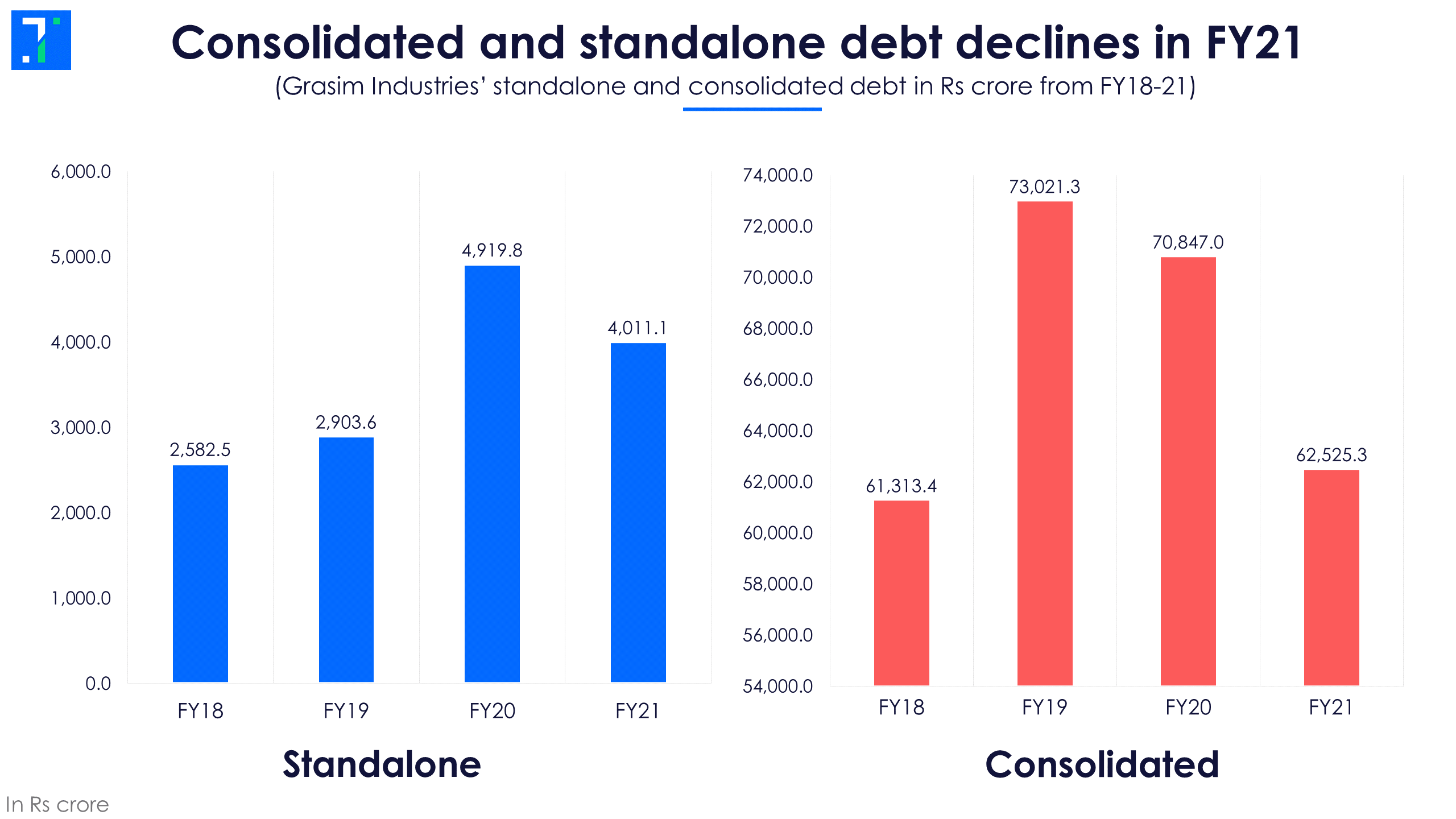 In January 2021, Grasim’s management said the paints foray will be funded through the sale of the fertilizer business, which is yet to be completed. The cement capex in FY22 is carried forward from the previous year. Standalone cash flows are also sufficient for the VSF and chemical capex plans. Once the fertilizer business’ sale is completed, analysts do not expectGrasim to take on any further debt in FY22.

Grasim’s VSF business has near-term positives. The price of VSF in the export market remains elevated, coupled with strong realizations. But the second wave will likely decrease the demand for fibers domestically, and the rising cost of pulp will contract its elevated margins. While H1FY22 might be favourable due to a low base and rising VSF prices, analysts expect the company’s revenues to decline in H2FY22.

In May 2021, UltraTech hiked prices by Rs 40 per cement bag to combat the rising input costs of pet coke, coal, diesel, and packaging materials. This price hike, in addition to high volumes, bodes well for the cement maker. This will also help Grasim’s consolidated business once the second wave subsides and cement production recovers. But that’s not what has got investors excited.

What’s got investors excited is the entry into the paints business. In FY21, Grasim reduced debt and shored up cash flows to make room for the expected paint investment. Investors expect the paints division to be the key focus in FY22 once the fertilizer business’ sale is completed.