Caplin Point Labs: Being different continues to make a difference

Caplin Point Laboratories is different from most Indian pharmaceutical companies  in its choice of a growth path of exports to lesser penetrated and relatively unregulated markets. This is a different strategy from its competitors, which has paid off in the long run.

The company is now a dominant player in the semi-regulated generic markets of Latin America (LatAm) and Africa. It forayed into these geographies in the early 2000s and established a strong and deep network, monetizing its early mover advantage in then untapped markets.

Caplin Point Labs has also worked to keep up with changing circumstances and environments, making strategic decisions that have ultimately added up to the bottomline. These include the conversion of fast selling generics into branded generics for higher profitability. Caplin Point Labs then entered the regulated markets of the US, which now form a small percentage of sales. There are plans afoot  to enter Canada, Australia, China and Brazil shortly. The company’s stock was up 7% on the day of  the results, showing that investors were reposing their faith in the company. 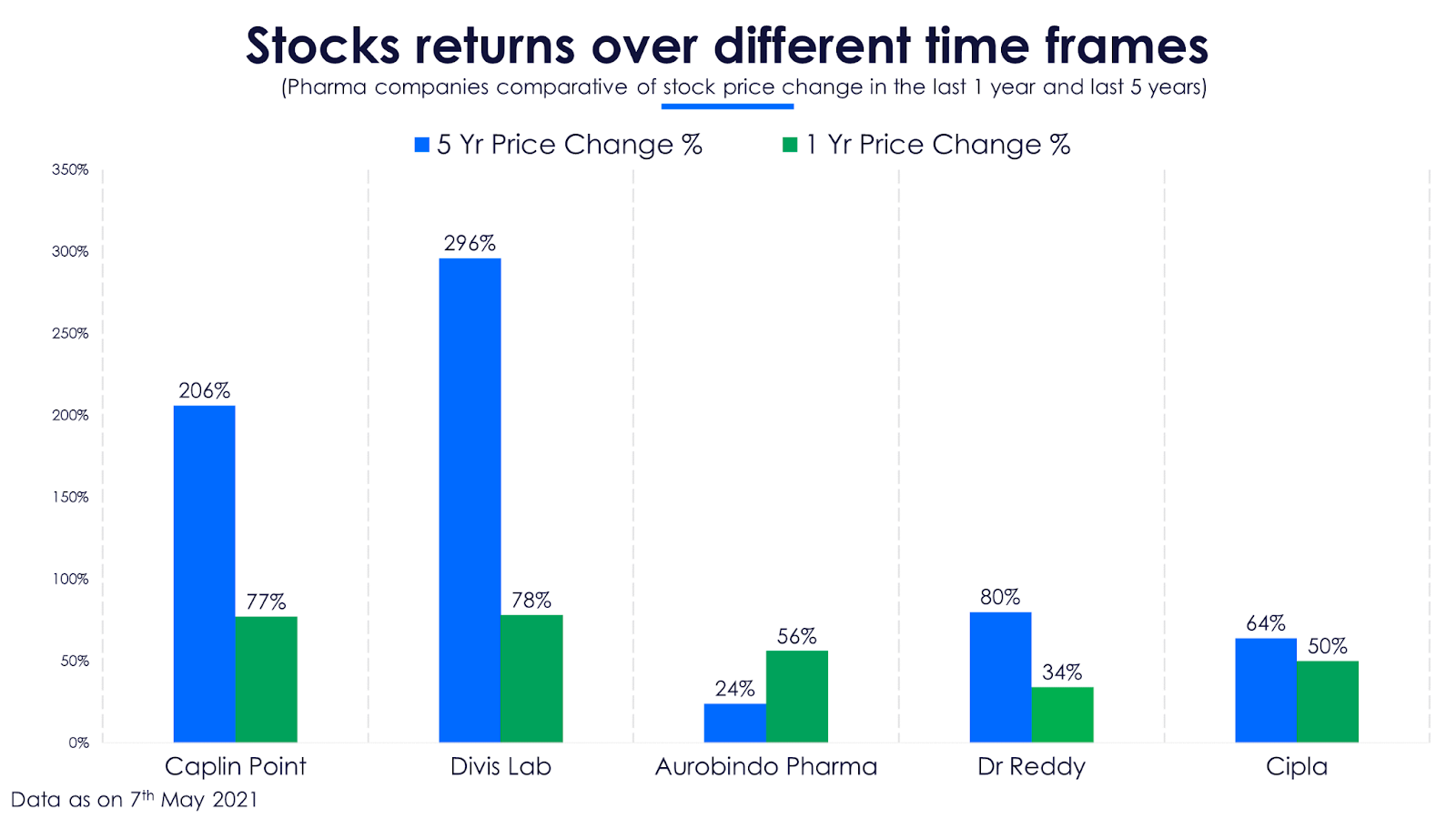 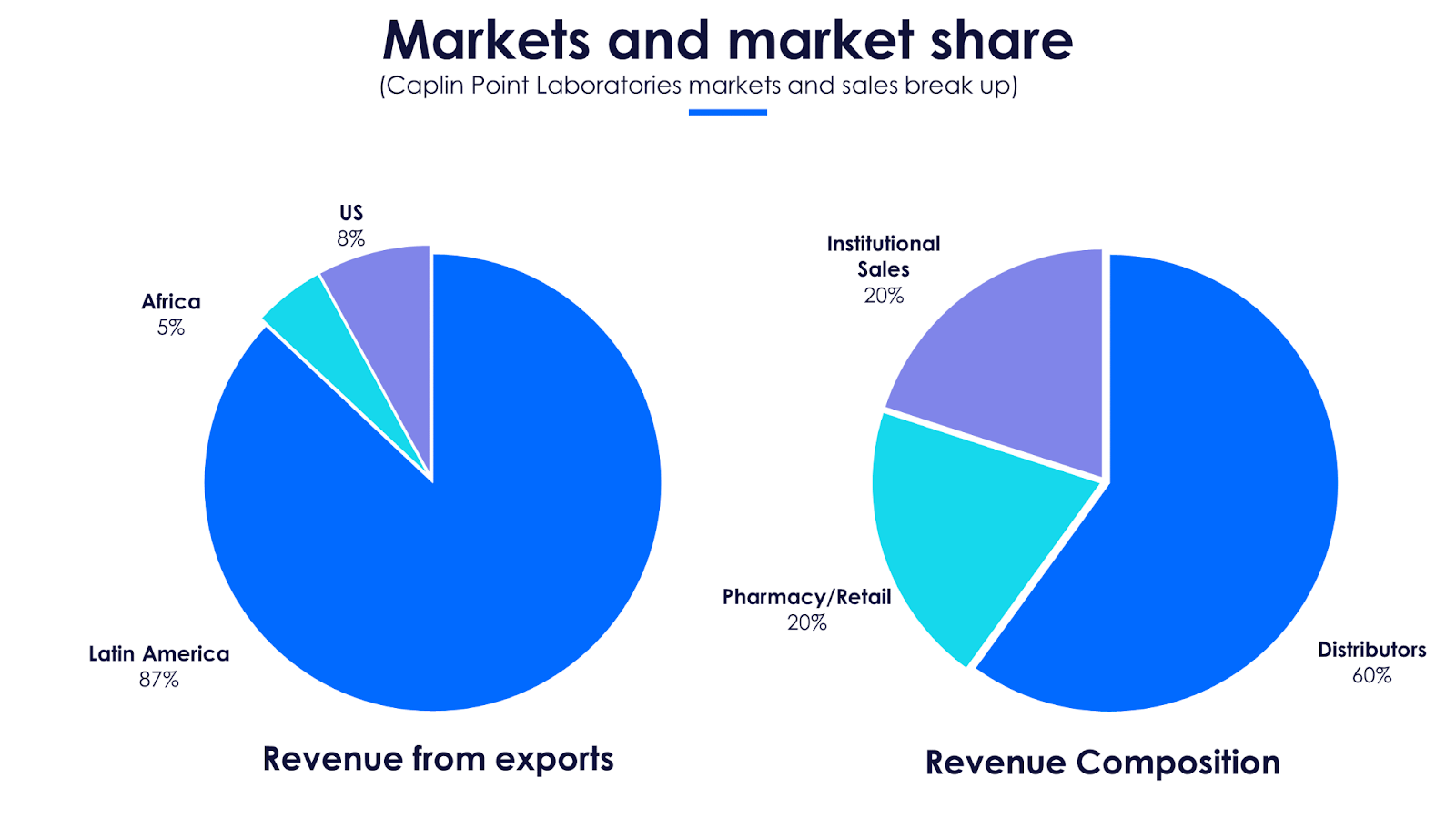 The Response to Covid - Converting a stumbling block into opportunities

As with all other industries, the pandemic situation in FY21 affected Caplin Point Labs too. However, the company moved swiftly to make changes in the inventory and supply via online models.

In the US markets, prescription drugs sales dropped, but was more than compensated by online sales and  pharmacy driven sales, where Caplin Point Labs had a strong presence. Secondly, the company rationalised a part of its inventory, and moved from non-critical to critical products, focused on the fastest moving products recommended by WHO and was able to ensure supply to customers.

The management evaluated an opportunity for contract manufacturing of Covid19 vaccine but is not keen on pursuing it. According to the management, vaccine manufacture comes under the spectrum of biologicals, while Caplin Point Labs is a pharmaceutical company. This would need remodelling of their plants, impairing production, and will consequently take time.  Management decided not to address this opportunity at this point of time and instead focus on the company’s existing plans. 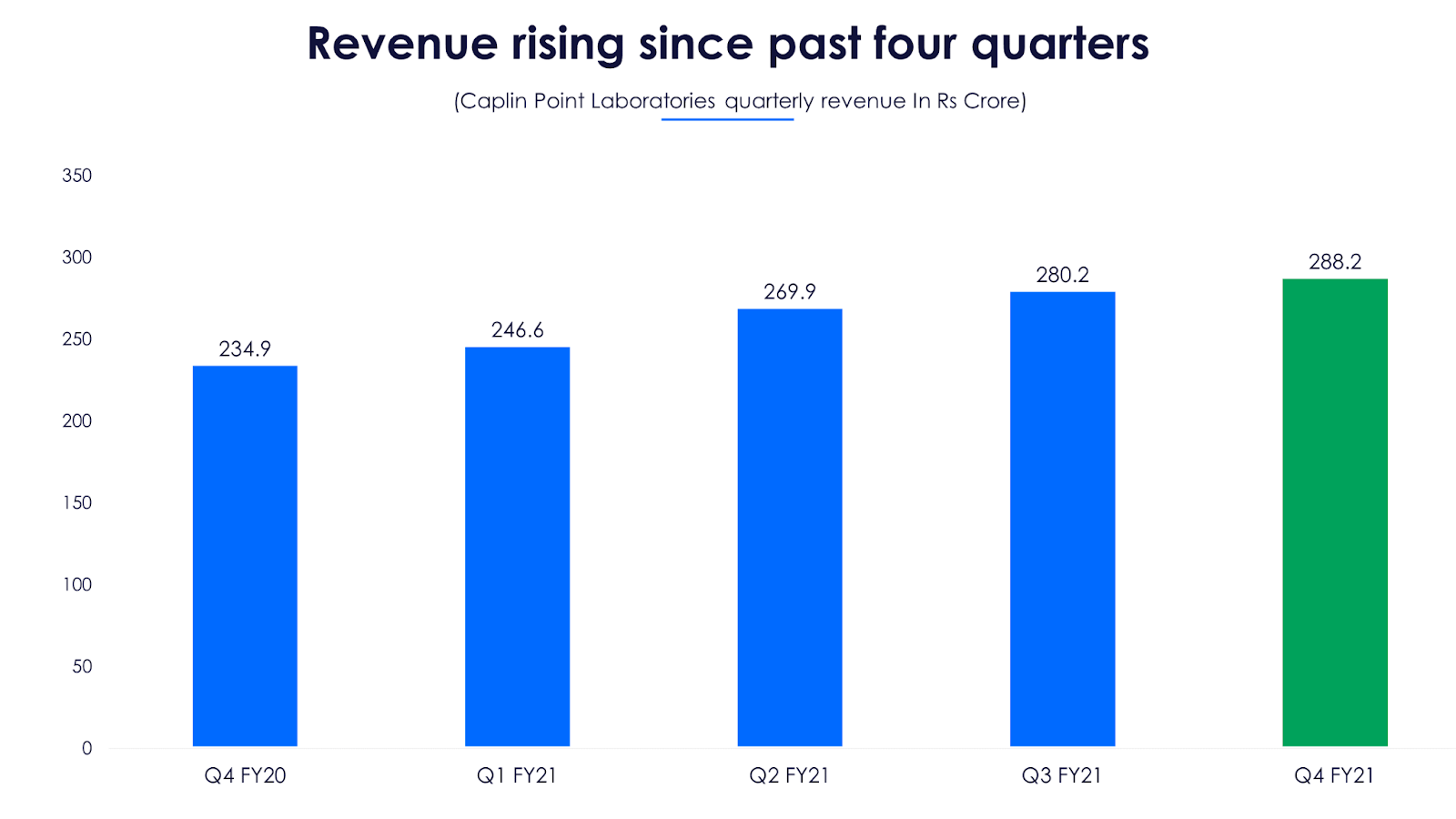 Despite being in a challenging year, the company was able to supply to Latin American markets from India or China, where it also has operations, depending on the availability and better pricing of the raw material. Online sales with Quentenx in US markets generated a sales of $9,85,000 in Q4 FY21. Emergency orders from Brazil and Mexico, where operations are yet to begin, helped generate revenue from newer markets in response to pandemic dependent emergency supplies. 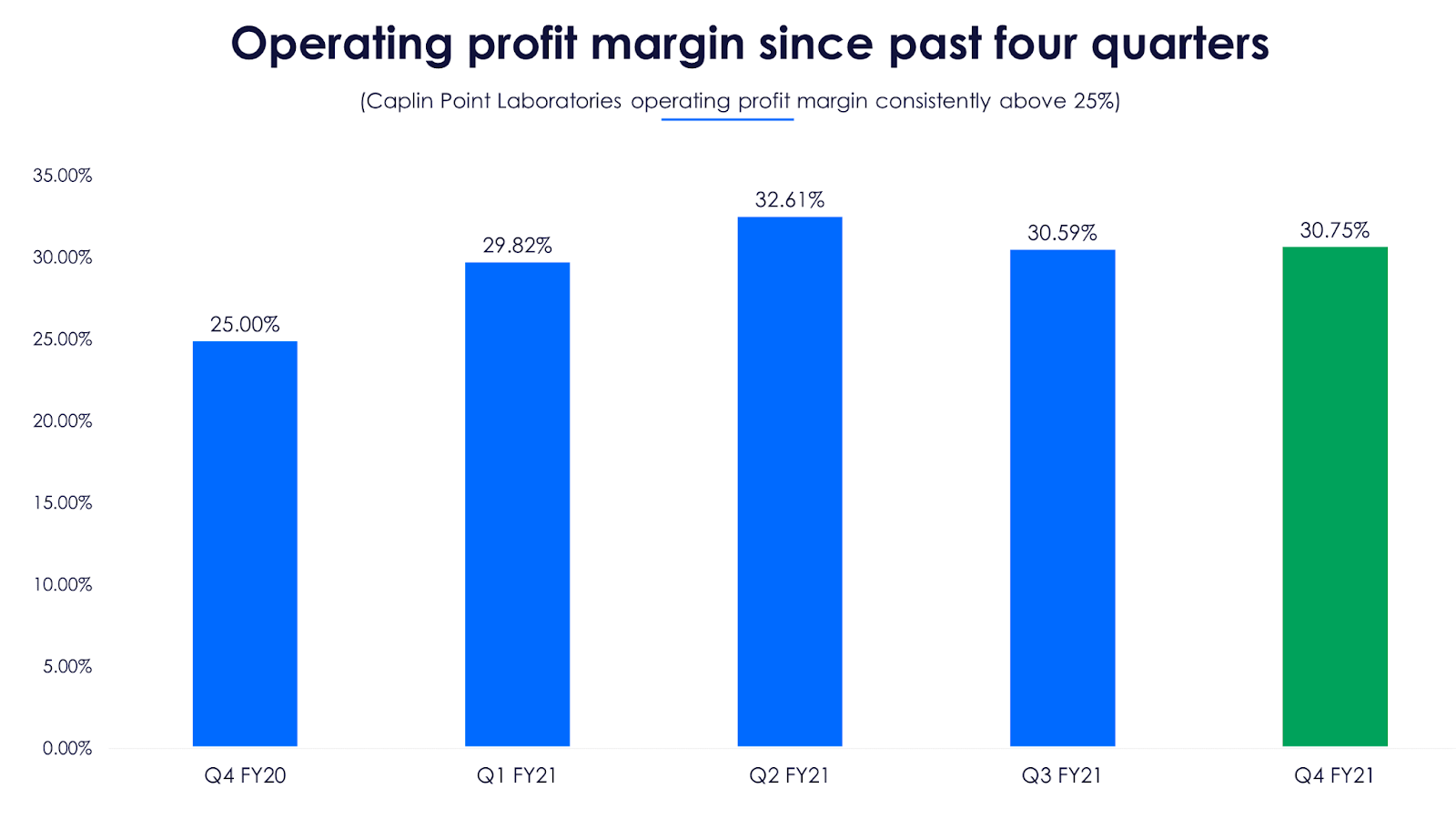 Newer markets and opportunities – Emergency approvals give a boost

Caplin Point Labs is planning to enter newer markets in LatAm, and is looking at Bolivia, Peru, Chile and Columbia. The company expects to replicate its business model based on its experience in other LatAm countries.

According to the management, the bigger opportunity in LatAm lies in Brazil and Mexico, where they have registered for business but currently are only supplying emergency orders. With this, the company will  move from smaller geographies  to larger ones in LatAm.

Major growth in LatAm is expected from Mexico. Apart from emergency supplies, further expansion plans  in these countries would be evaluated by the company as soon as  the Covid19 curve flattens. In Brazil, the company is pretty optimistic about the approval process coming down from four years initially, to much lower in the near future.

The other new markets that the company plans to enter are Canada and Australia. Partners for these countries have been finalised and revenue contribution from these geographies can be expected in the next 18-24 months.

The US opportunity is crucial in the next few years

According to the company’s estimates, the market size of products that are approved or under approval is $670 million, while they are looking at a market size of around $3 billion over the next 5 years, counting approved products and products in the pipeline. As on date, 20 ANDAs (Abbreviated New Drug Application) have been filed and 15 ANDAs have already been approved. In the next four years, there are around 40 more ANDAs in the pipeline that will come onstream.

The strategy for US business is to move from simple molecules to complex ones that would lead to high value products. The Research & Development team has expanded from 107 members in 2017 to more than 300 at present count.

However, there are a couple of challenges in the US business. The capacity utilisation of the US business at present stands at 40% to 45%. The company expects to ramp this up once approvals for ANDAs come through, and expects to utilise unused capacity to launch the products. Regulatory compliance also poses a big hurdle in the US.

Backward integration with an eye on US expansion

Current expansion plans include investments for API (Active Pharmaceutical Ingredient) plants. According to the management, this was a conscious decision based on a few factors. Firstly, there was a need to reduce the dependency on China for APIs and for ease of regulatory compliance.

For US business, approvals can sometimes be a challenge if raw material is outsourced. To mitigate this the company has chosen a backward integration approach where they would have control over the whole process of manufacturing, right from the raw material (APIs) to the finished product. 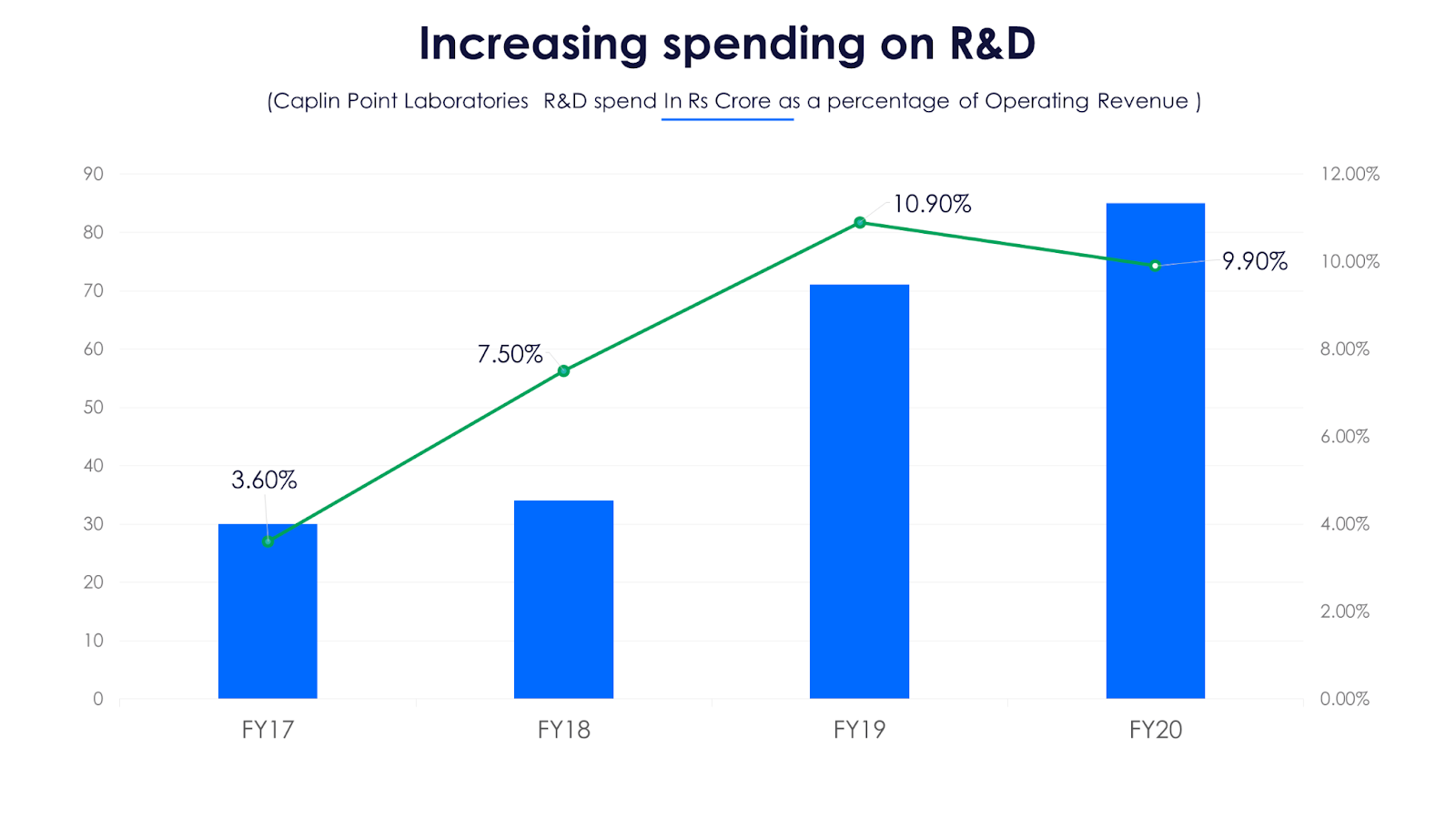 While the company has outlined a capex plan of 300 crore, this would take at least two years to fructify - being spent primarily on three projects.

Caplin Point’s CAGR for the last 10 years for Revenue, EBITDA, PBT and PAT is above 28%. This is a good number for any company, particularly in the pharma industry. If we take a look at the returns of the stock for the last 5 years, Caplin Point Labs has been a multibagger and fared better than most of the other stocks from this sector. The other stock that has outperformed the industry is Divis Laboratories.

With revenues crossing Rs 1,000 crore in FY21, the plans in place for expansion in new markets, growing market share in the US and the company delivering in FY21 despite challenges faced by the pandemic, FY22 will be interesting to see in terms of the growth trajectory.