Last year when Tata Consultancy Services reported its Q4FY20 results, the mood was sombre. The company had to scramble to adapt to employees working from home and there were delays in getting customer approvals for the move. This led to supply constraints impacting performance.

A year later, the picture looks completely different. TCS’ consolidated Q4FY21 net profit rose 6.26% QoQ to Rs 9,246 crore, and revenues rose 4.02% QoQ to Rs 43,705 crore. Its revenues in dollar terms rose 5.03% quarter-on-quarter (QoQ) to nearly $ 6 billion. Its order book of $9.2 billion at the end of the March 2021 quarter is the highest ever. And the company sees robust demand for IT services due to pandemic-era migration to the cloud by many businesses. 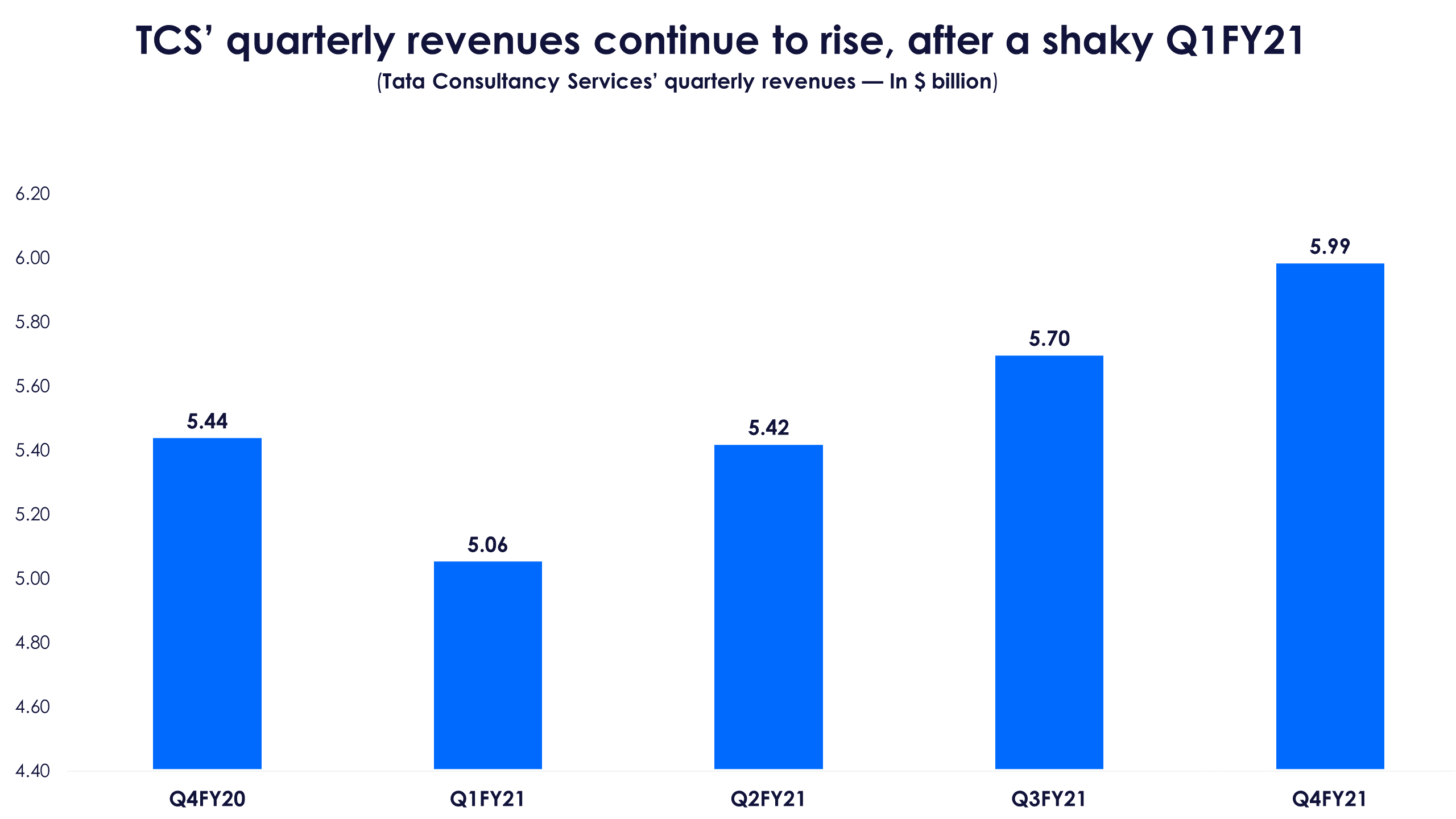 But the market does not seem to be enthused with these numbers, as TCS along with the other Nifty IT constituents are trading down in reaction to the company’s results. Today, TCS' stock ended down 4%, despite posting good Q4 numbers. We parse through TCS’ earnings to find out what gives.

All verticals in positive growth territory in Q4

The mainstay of most IT services companies including TCS is the BFSI (banking, financial services and insurance)  vertical. Revenues from BFSI, despite a dip in Q1FY21, were at their highest quarterly level ever ($ 1.93 billion) in Q4FY21, rising 8% QoQ in dollar terms.

What aided TCS’ sequential revenue performance in Q4FY21 was that apart from the communication and media vertical, all other verticals posted both QoQ and YoY growth in dollar terms. 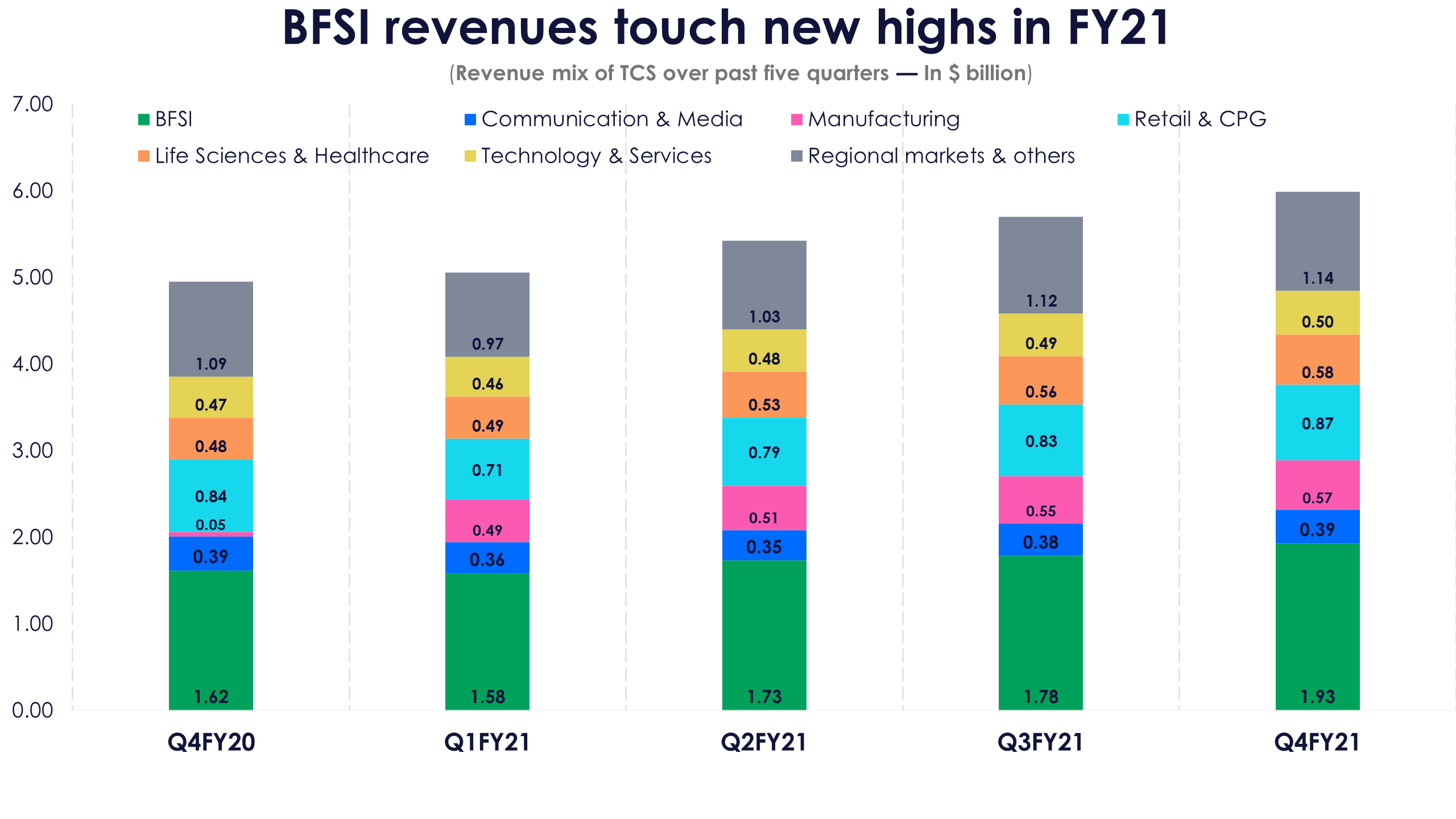 In the current environment where folks are working from home with minimal physical contact, TCS’ clients in the retail and consumer packaged goods (CPG) vertical have become agnostic to where and how customers buy their products.The increasing use of e-commerce has made cloud migration, and many other related technologies a must-have for almost all industries. This is true especially for the retail sector.

Although the pandemic increased revenue for the life sciences and healthcare vertical, it has seen sequential revenue growth for many years now. Now this vertical contributes 9.3% of TCS’ FY21 revenues, compared to 8.3% in FY20. In fact, this vertical is the only one that has posted double-digit revenue growth (18.3%) in dollar terms in FY21.

However, the company has entered FY22 with good revenue growth momentum, and a fairly large order book that will sustain growth over the next 12 months.

Margin back in ‘aspirational’ territory

Due to lower attrition at 7.2% in trailing twelve-month terms (excluding subsidiaries), the company has managed to bring its margin for Q4FY21 within its aspirational band of 26-28%. As TCS does not give any revenue or margin guidance, the company doesn’t target this level specifically. 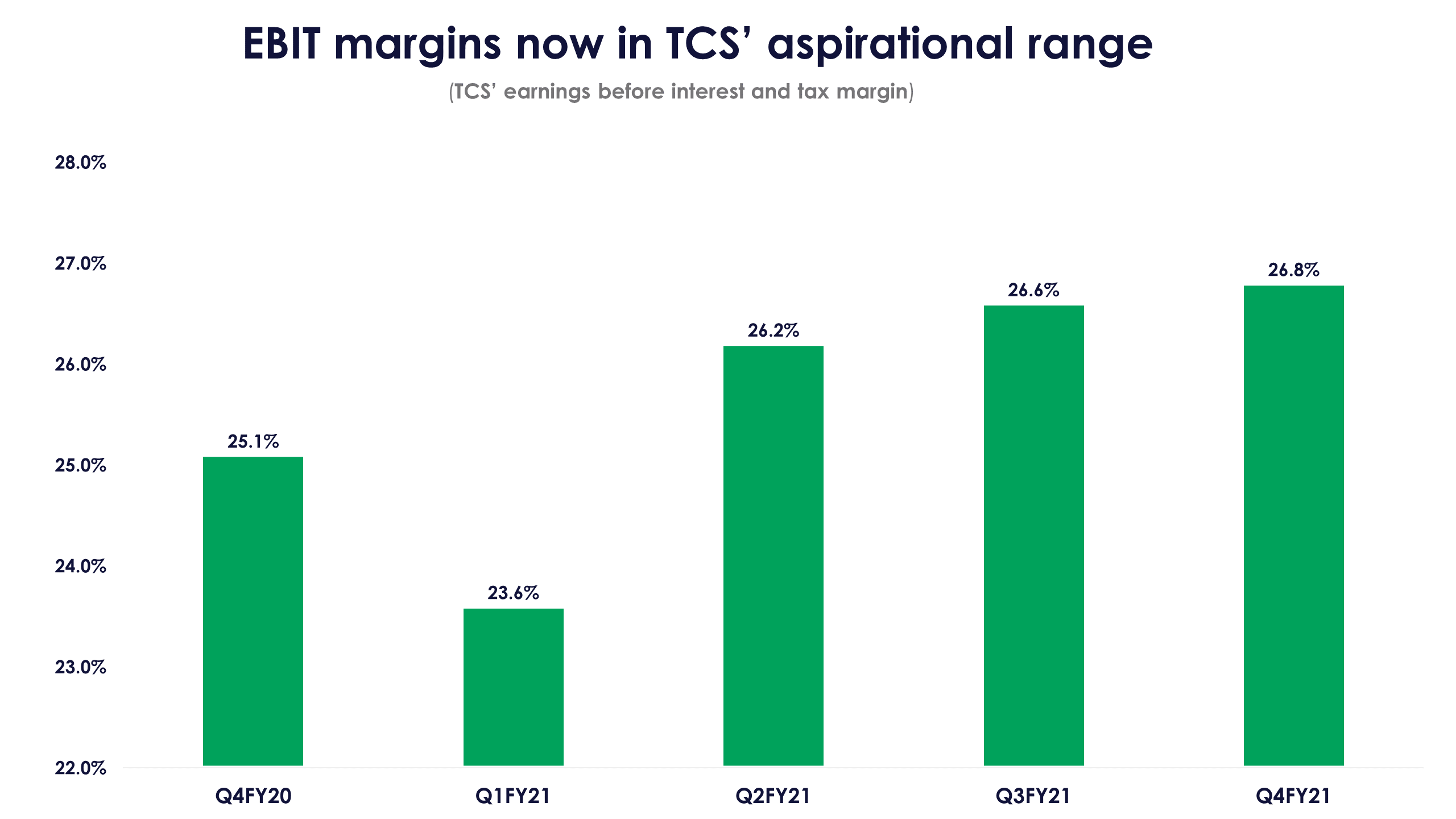 Due to consecutive quarters of sequential revenue growth, operating leverage came into play, resulting in the company converting its entire net profit of Rs 9,246 crore into operating cash flows. There is also a hiring pick-up as the company added 19,388 employees at a net level in Q4FY21.

What will be interesting to watch however is how salary hikes will play out in Q1FY22. Last year, the company delayed salary hikes to H2FY21. This along with strict cost controls resulted in a spike in margins for Q1FY21 and Q2FY21. But as H2FY21 revenues were higher than H2FY20, the margins also rose due to operating leverage.

Even though TCS has reported stellar numbers compared to Q4FY20 the stock responded negatively. The market is expecting most IT services companies to post double-digit revenue growth, and as cost controls ease up, TCS’ pathway to that mountain is not fully clear. That could be one of the reasons the stock is trading in the red a day after its results were announced, despite a Rs 15 per share final dividend being declared.