Indigo Paints is the last of the five biggest Indian paint makers to list on the exchanges. The Sequoia-backed company is worth just short of $1 billion. After its Rs 1,170 crore initial public offering, Indigo Paints will become the fifth-largest paint listed paint company in India, but also the most overvalued.

The Pune based company was started by Hemant Jalan in 2000. Since then it has established itself as a prominent paint company in rural and semi-urban areas, roping in a former Indian cricket captain as its brand ambassador. Despite the booming brand image, supported by higher than industry average advertising spend, Indigo Paints hasn’t been able to break into the urban market. With over 50% of the paint market cornered by the top two companies - Asian Paints and Berger Paints, Indigo Paints will find a tough time establishing itself beyond smaller cities.

For investors, who think the Rs 2.5 lakh crore market leader Asian Paints is an expensive buy, with a 112 trailing 12-month price to earnings ratio, wait till they get a look at the even more overvalued Indigo Paints. 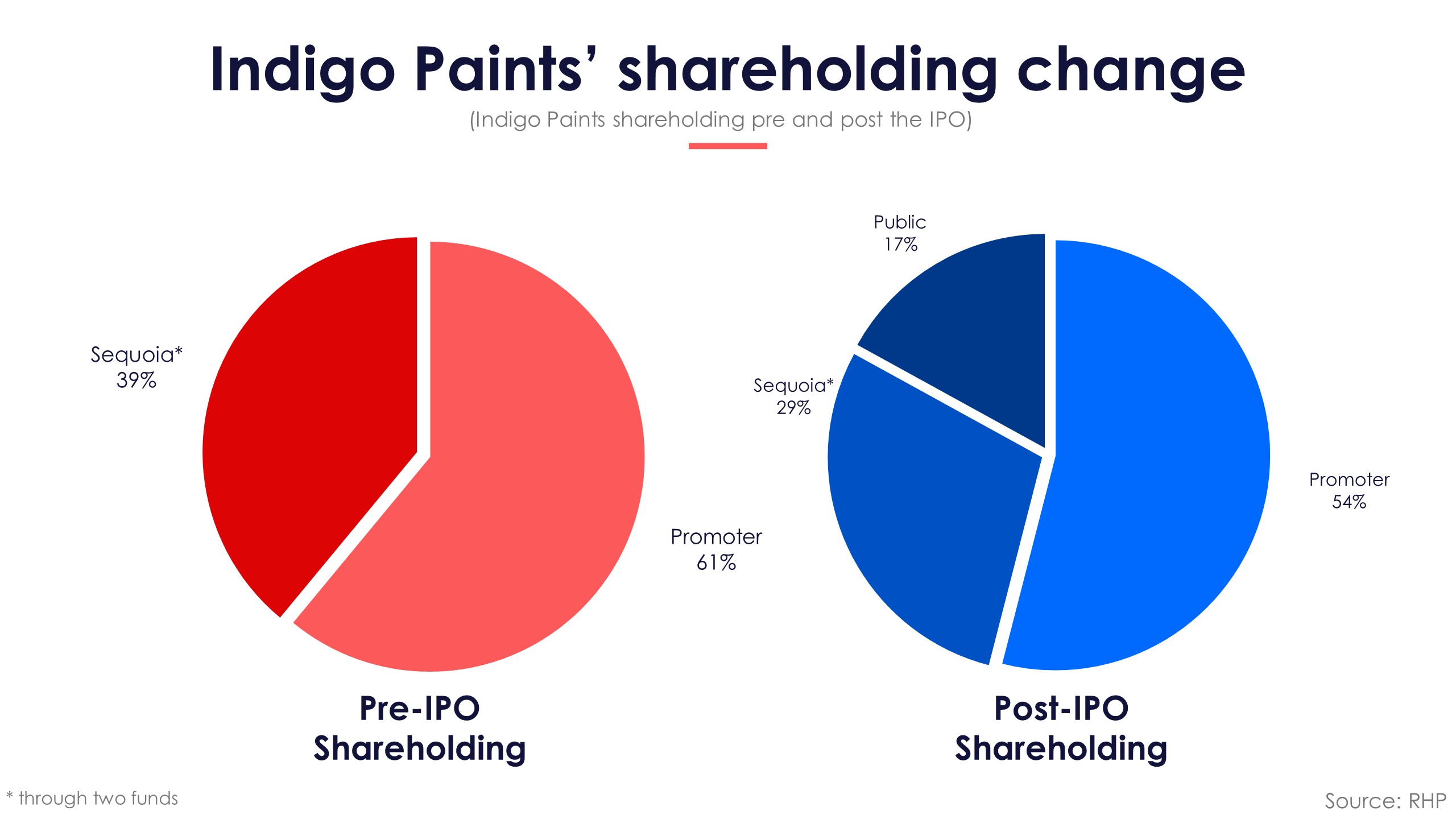 Indigo Paints will use the fresh issue for capital expenditure (capex) and pay off loans worth Rs 25 crore. Out of the Rs 300 crore fresh issue proceeds, Rs 150 crore will be used to expand its manufacturing facility in Pudukkottai, Tamil Nadu. This capex will expand its capacity to 63,600 kiloliters per annum (KLPA) from 13,660 KLPA, which is expected to be operational by 2023. The remaining capex corpus of Rs 50 crore will be used to purchase tinting machinery. Between FY18 to FY20, Indigo Paints installed 1,223 tinting machines every year. As of September 2020, it had 4,603 tinting machines across dealerships.

Overvalued in an expensive market

Indigo Paints’ earnings per share (EPS) for the year ended March 2020 was Rs 10.6 per share. Taking the upper price band of Rs 1,490 per share, and the EPS of FY20, Indigo Paints is valued at a price-to-earnings ratio of 140 times. Indigo Paints is overpriced compared to its peers, despite being in an industry with high valuations. 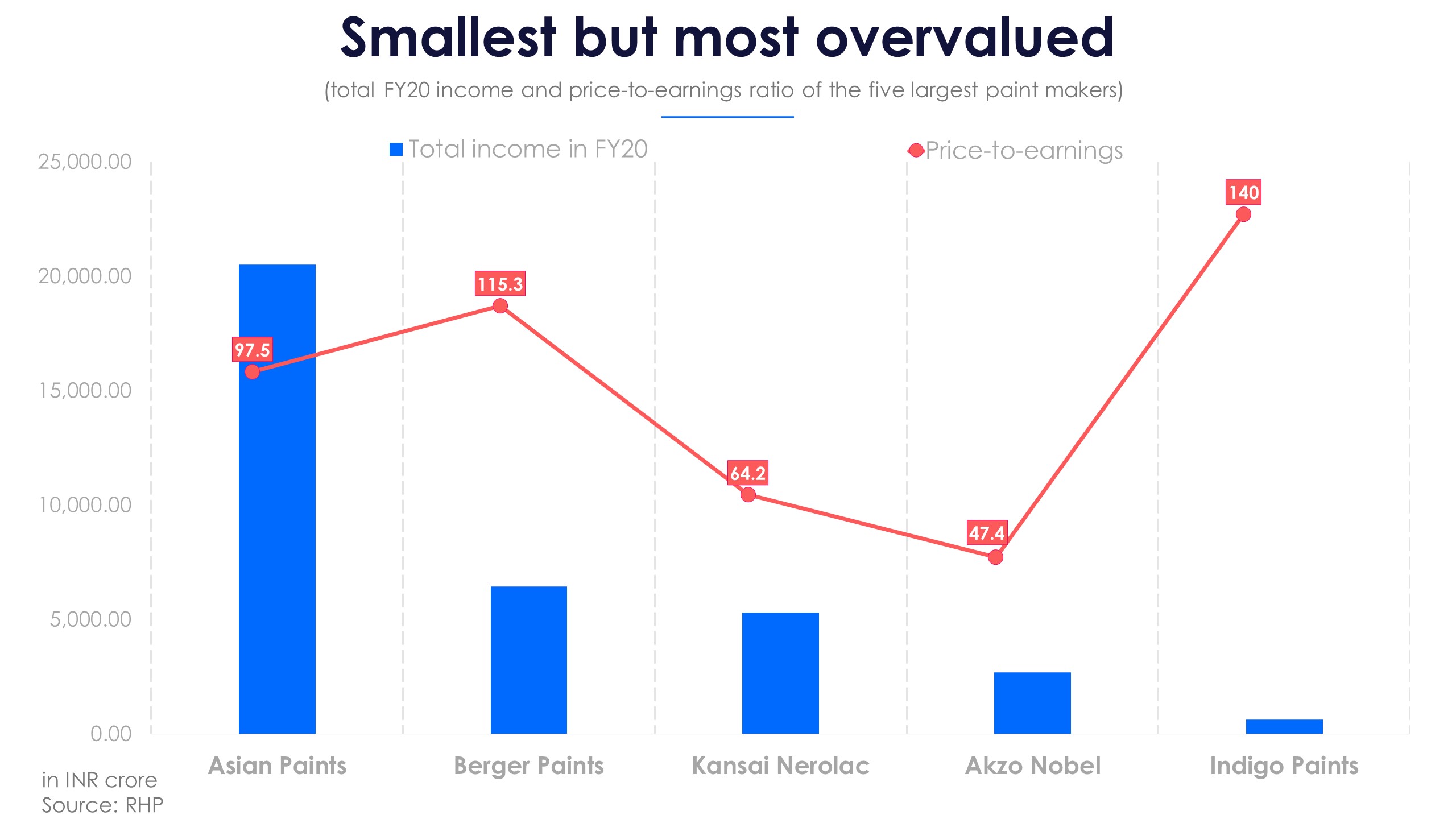 These products are manufactured in three facilities in Jodhpur, Kochi, and Pudukkottai. The cumulative capacity of the facilities is 101,903 KLPA for liquid paints and 93,118 KLPA for powder paints. Through the capex utilisation from the fresh issue, Indigo Paints’ total capacity will increase by 25% in 2023. 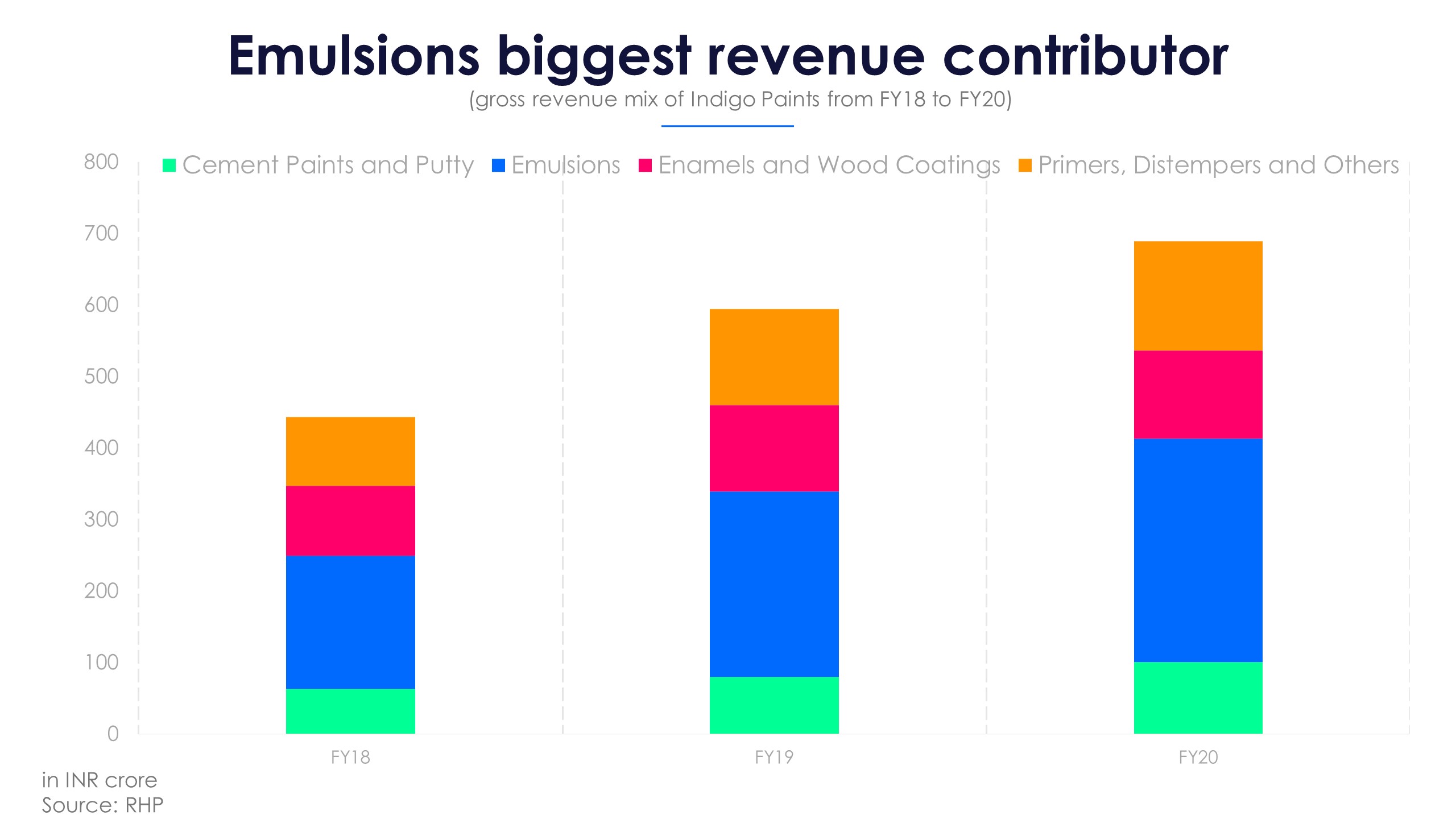 With big paint companies like Asian Paints, Berger Paints, and Kansai Nerolac Paints dominating metro and tier 1 cities Indigo Paints focused on smaller cities initially. Over 85% of Indigo Paints revenue comes from tier 2 to tier 4 cities. The company first set up its dealer network in these cities before venturing into the urban areas. To leverage its brand image, Indigo Paints brought in former Indian cricket captain Mahendra Singh Dhoni as a brand ambassador. As of FY20, it had 36 paint depots, an 8% rise YoY, and 11,230 active dealers, a 9.6% rise on a YoY basis.

Due to the pandemic, discretionary spending on consumer goods like decorative paints declined. Indigo Paints managed to withstand this due to its presence in rural areas, which fared better than urban areas. 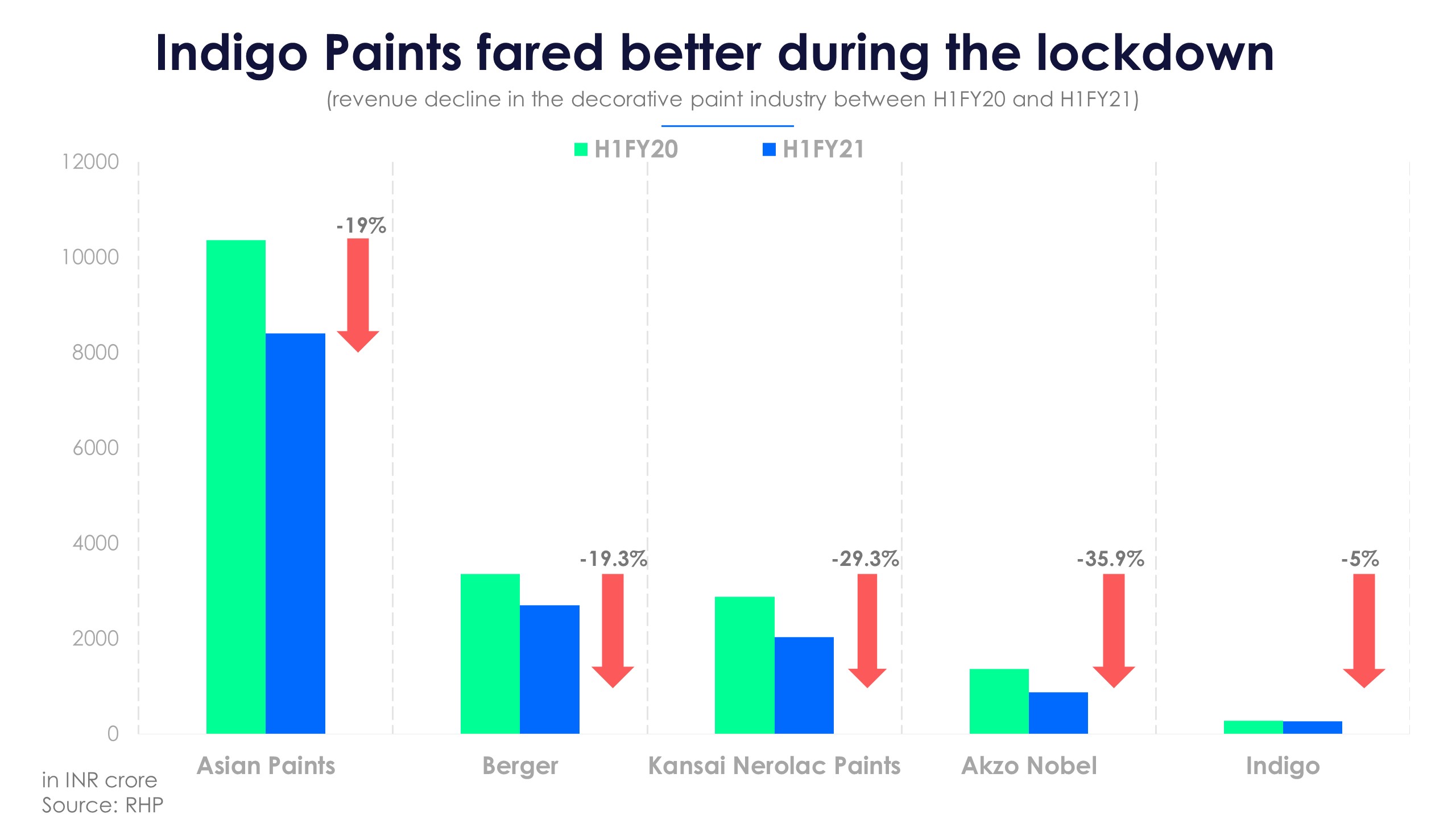 In FY20, Indigo Paints reported total revenue of Rs 624.8 crore, a 16.7% rise from the previous year. Its revenue has grown at a compound annual growth rate (CAGR) of 25% between FY18 to FY20. For the nine months ended September 2020, revenue was Rs 259.4 crore, a fall of 5% on a YoY basis. This was due to the pandemic and the resulting lockdown decreasing demand for decorative paints.

For the nine months ended September 2020, total expenses were Rs 225 crore, a fall of 14% on a YoY basis. The decrease in expenses was on account of lower advertising spend, which dropped by 60% in H1FY21 against the previous year. 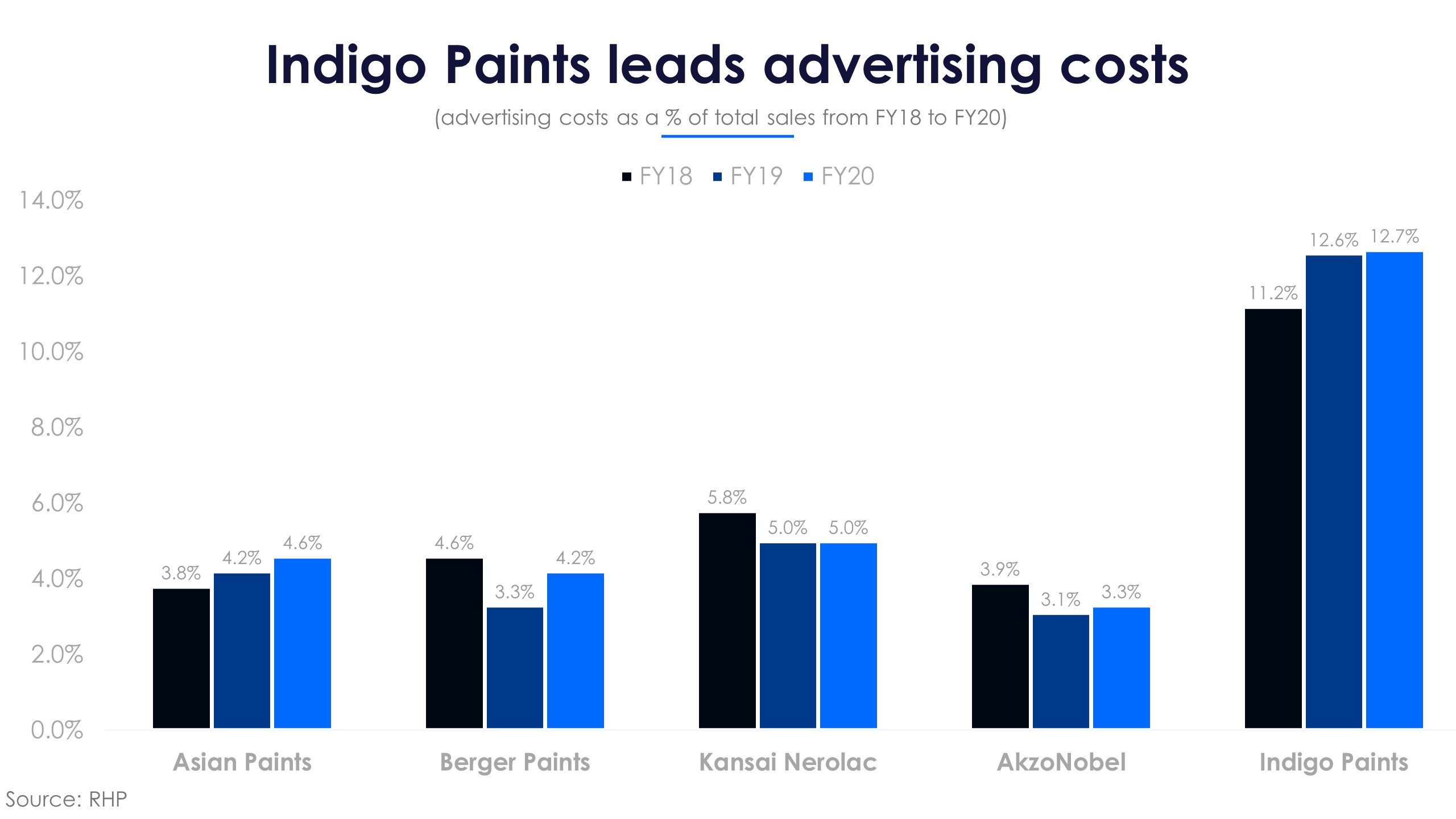 Earnings before interest, depreciation, and amortization (EBITDA) was Rs 91 crore in FY20, a 68% rise against the previous year, with the EBITDA margin at 14.5%. For the six months ended September 2020, EBITDA was Rs 48 crores, a two-fold increase YoY. 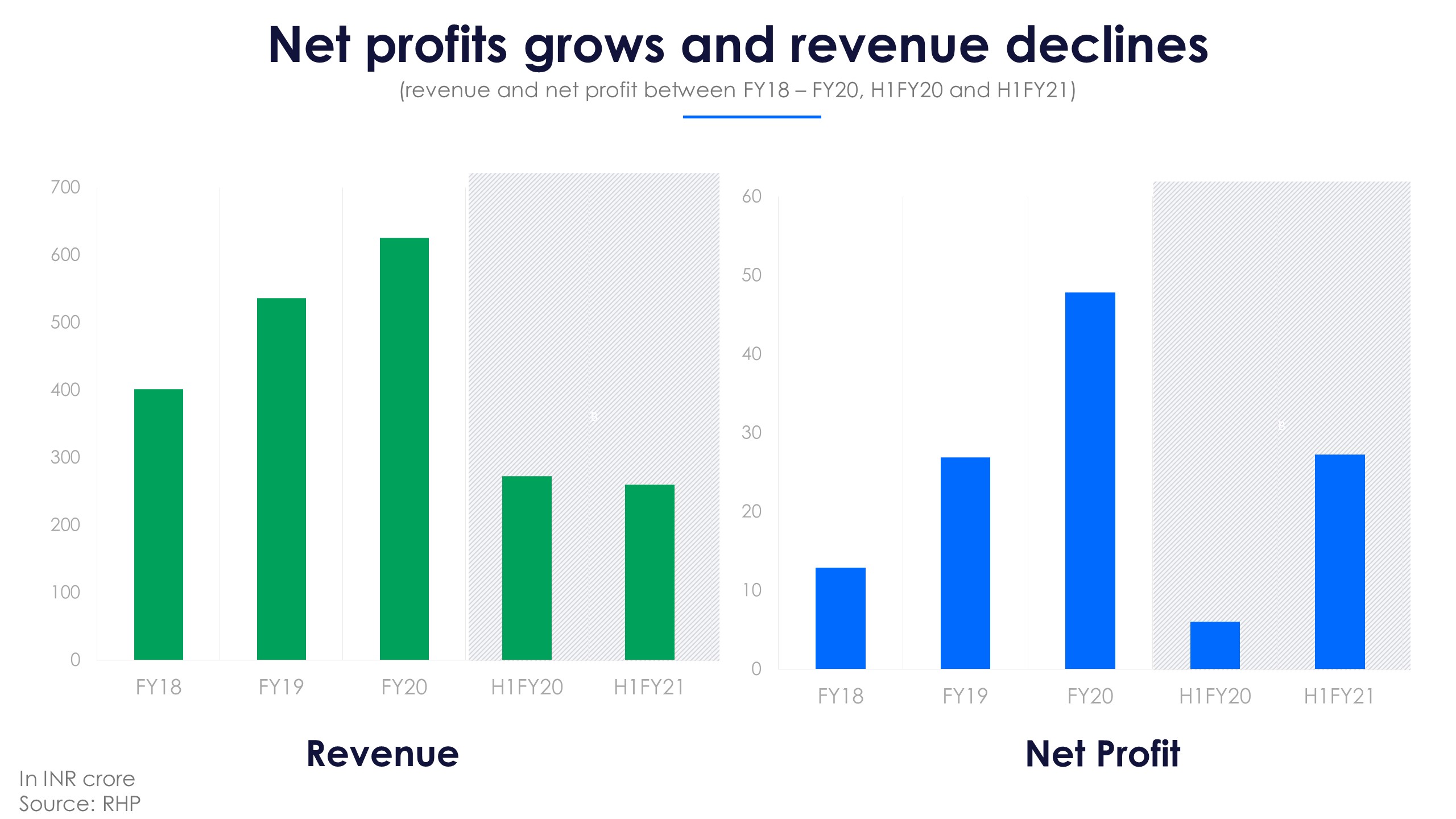 The decorative paints industry was valued at Rs 4 lakh crore in 2019. It is expected to grow at a CAGR of 13% to Rs 7.4 lakh crore by 2024. This growth will be driven by tier 2 - 4 cities, where Indigo Paints has a strong presence. The company expects the central government’s Pradhan Mantri Awas Yojana mission of affordable housing in rural and semi-urban areas to boost the demand for decorative paints.

Enamels, which contributes 45% of Indigo Paints’ gross revenue is expected to grow at a CAGR of 14.2%, the highest among paint categories. The enamels market is expected to reach Rs 3.1 lakh crore by FY24. 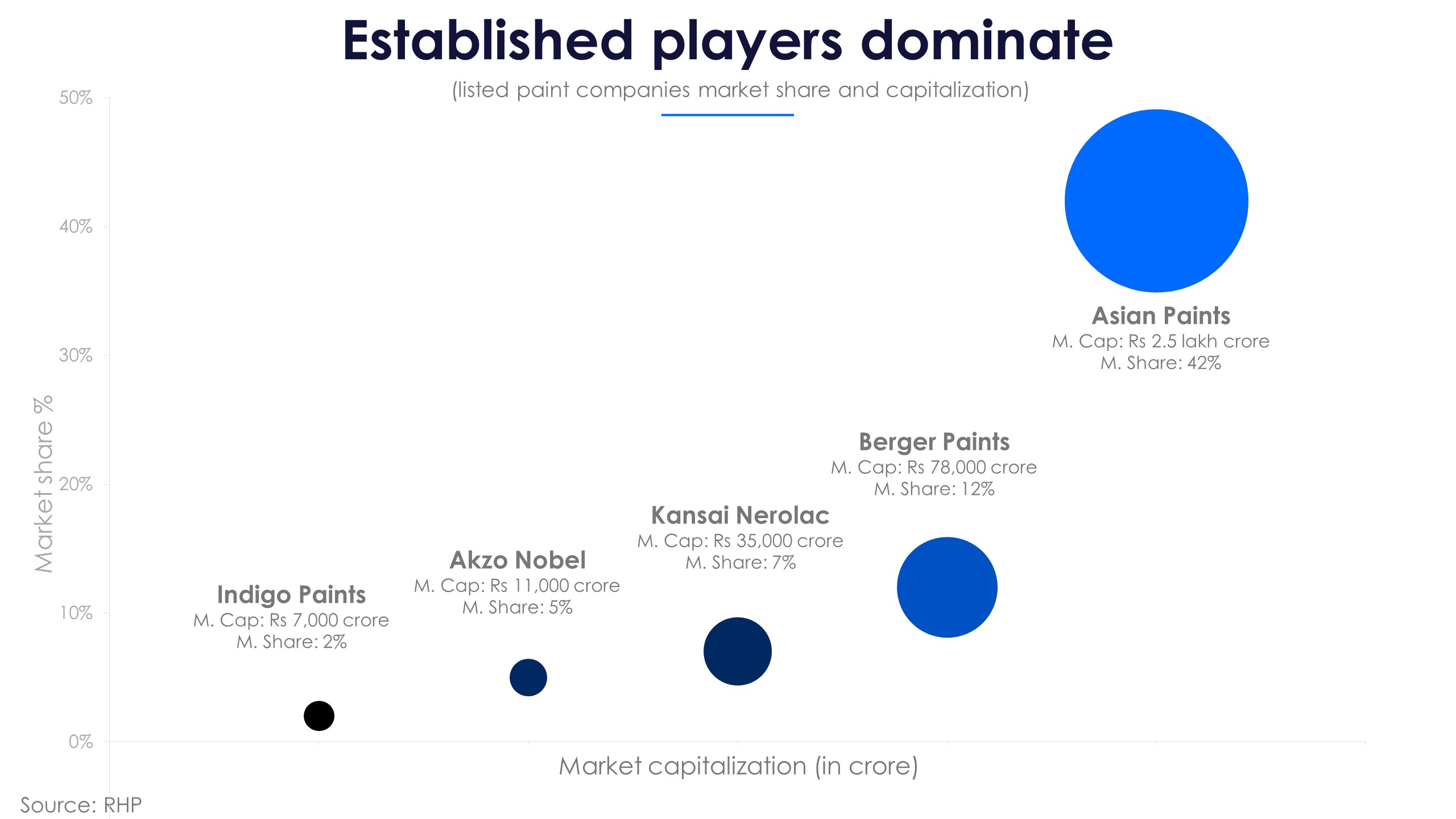 As of September 2020, four companies - Asian Paints, Berger Paints, Kansai Nerolac Paints, and Akzo Nobel held 67% of the market. Indigo Paints accounted for only 2% of the market. This is because the paint market has several entry barriers like the requirement of a large distribution network, dealer discounts, setting up tinting and blending machines, and marketing costs.