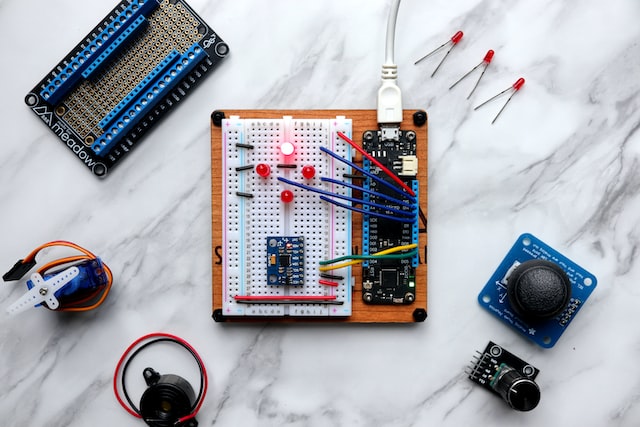 Syrma SGS Technology IPO leaves money on the table, but should investors bite?

After a brief lull, another initial public offering (IPO) will hit the primary markets - anchor investors are probably hoping that they can ride the wave of the recent recovery. Syrma SGS Technology’s IPO opens on August 12 for subscription and closes on August 18.

The company is an electronics manufacturing service provider for businesses like TVS Motor, …

After a brief lull, another initial public offering (IPO) will hit the primary markets - anchor investors are probably hoping that they can ride the wave of the recent recovery. Syrma SGS Technology’s IPO opens on August 12 for subscription and closes on August 18.

The IPO consists of a fresh issue of shares of up to Rs 766 crore and an offer for sale by promoter Veena Kumari Tandon of up to 33.7 lakh shares. The proceeds of the fresh issue will be used for capital expenditure and research and development (Rs 403 crore), working capital (Rs 131.6 crore), and the rest for general corporate purposes.

The price band is set at Rs 209-220, which values the company at 41.9 times its proforma FY22 diluted earnings per share. In comparison, Dixon Technologies and Amber Enterprises trade at a TTM PE of 106.4 and 54.9, respectively. Syrma’s return on equity is lower than Dixon’s but higher than Amber Enterprises. 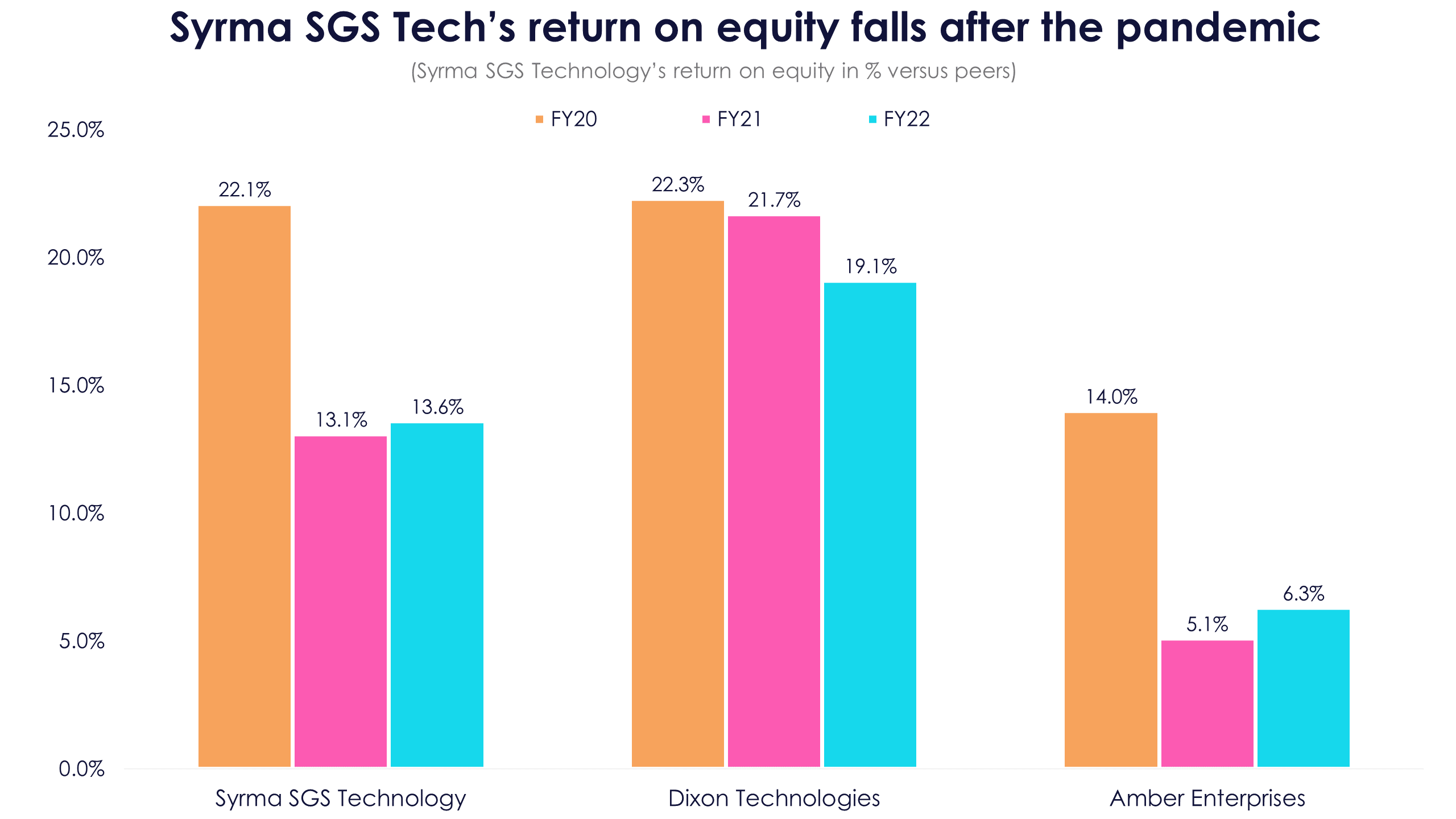 It appears the company is leaving enough money on the table for investors, considering the price band is set below the latest fundraise. But we need to look at the company’s financial performance to assess whether this is a good deal for prospective investors.

The majority of Syrma SGS Technology’s revenues came from the export market in both FY21 and FY22. But in FY22, this share came down to around 37% from over 50%. In comparison, Dixon Technologies and Amber Enterprises earn less than 1% of their revenue from exports.

Syrma SGS Technology’s 11 plants are strategically located to cater to customer demand locally. Its plants in Haryana, Karnataka, and Tamil Nadu are located near airports and ports to easily serve export customers’ needs. The company’s products are sold in 24 countries (besides India).

Although the company presented consolidated financial statements for FY21 and FY22 for ease of comparison, the proforma financials available in the red herring prospectus give a better perspective about the company’s business. The proforma combined profit dipped in FY21, while revenue was flat. Even though proforma revenue rose in FY22, profits did not rise commensurately because of higher raw material costs. 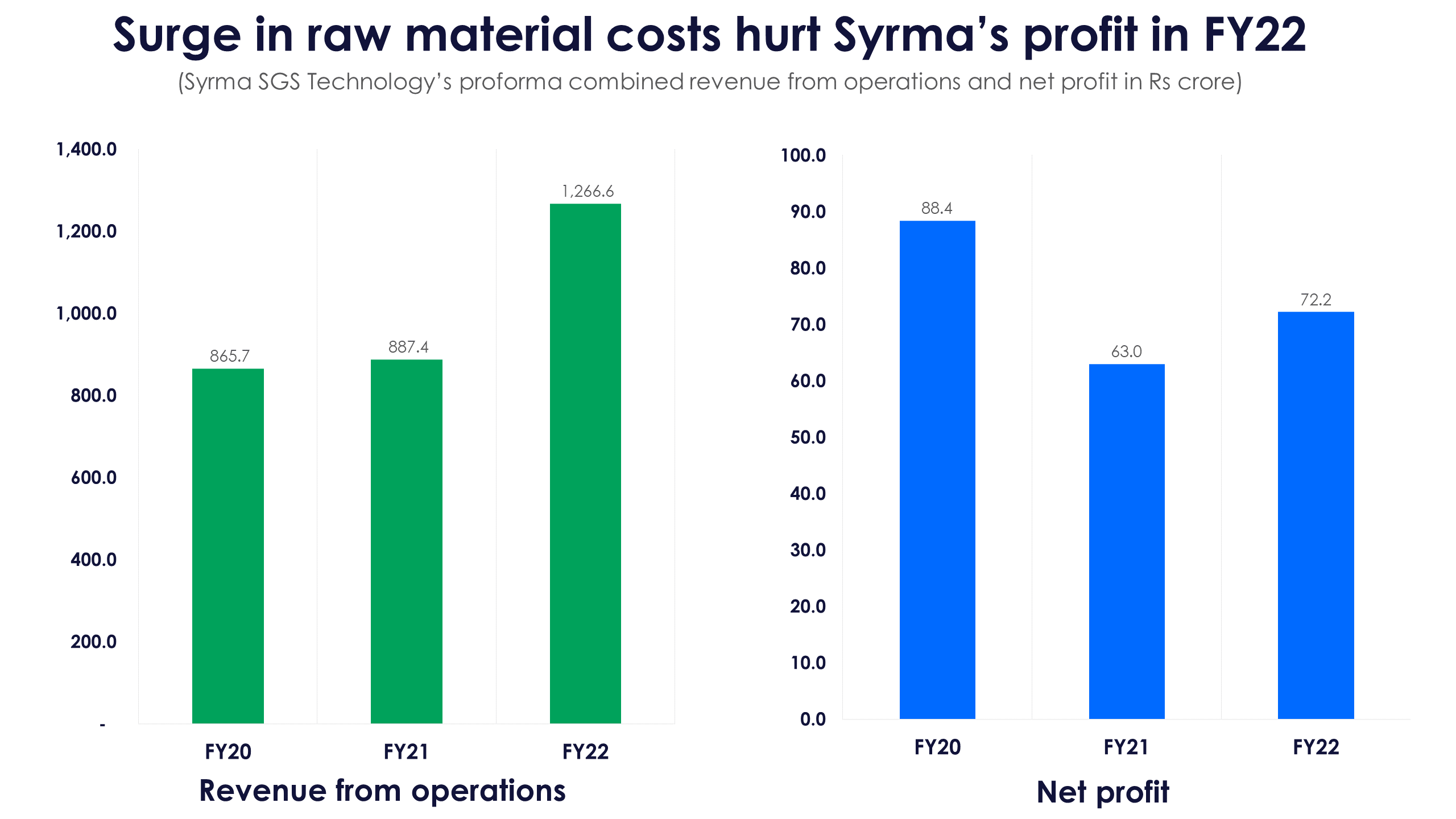 One of the companies that Syrma SGS Technology acquired in FY21 was SGS Tekniks Manufacturing. Investors should note that before Syrma SGS bought an 80% stake in SGS Tekniks, it was controlled by Syrma SGS’ promoter group. Syrma SGS paid around Rs 366 crore to buy out SGS Tekniks’ shareholders’ entire holding, including the promoters. This acquisition was essentially done to expand the geographical footprint of Syrma SGS and its customer base.

The company also acquired a 75% stake in Perfect ID India in FY21 for Rs 34.15 crore, and based on an investment agreement will in the future acquire the balance stake from Sakun Ahuja.

These acquisitions, apart from expanding its customer base, also give Syrma SGS Technology a footing in various other industries. This is visible from the company’s revenues by industry, as the contribution from the IT industry rose to 10.2% in FY22 compared to 0.2% in FY20. 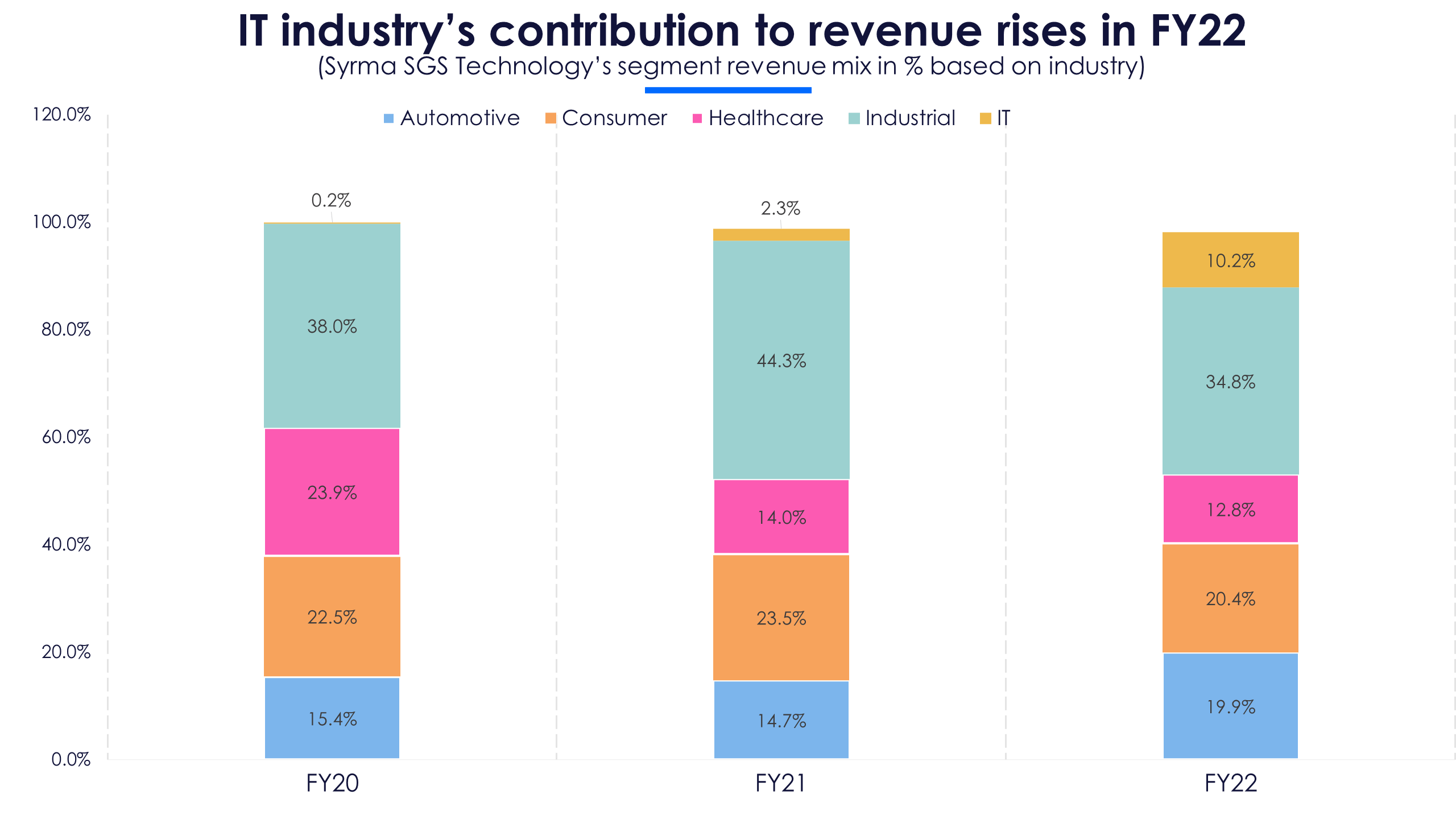 Despite the company’s net profit growing slowly in FY22, it boasts of higher margins than its listed peers like Dixon Technologies and Amber Enterprises. 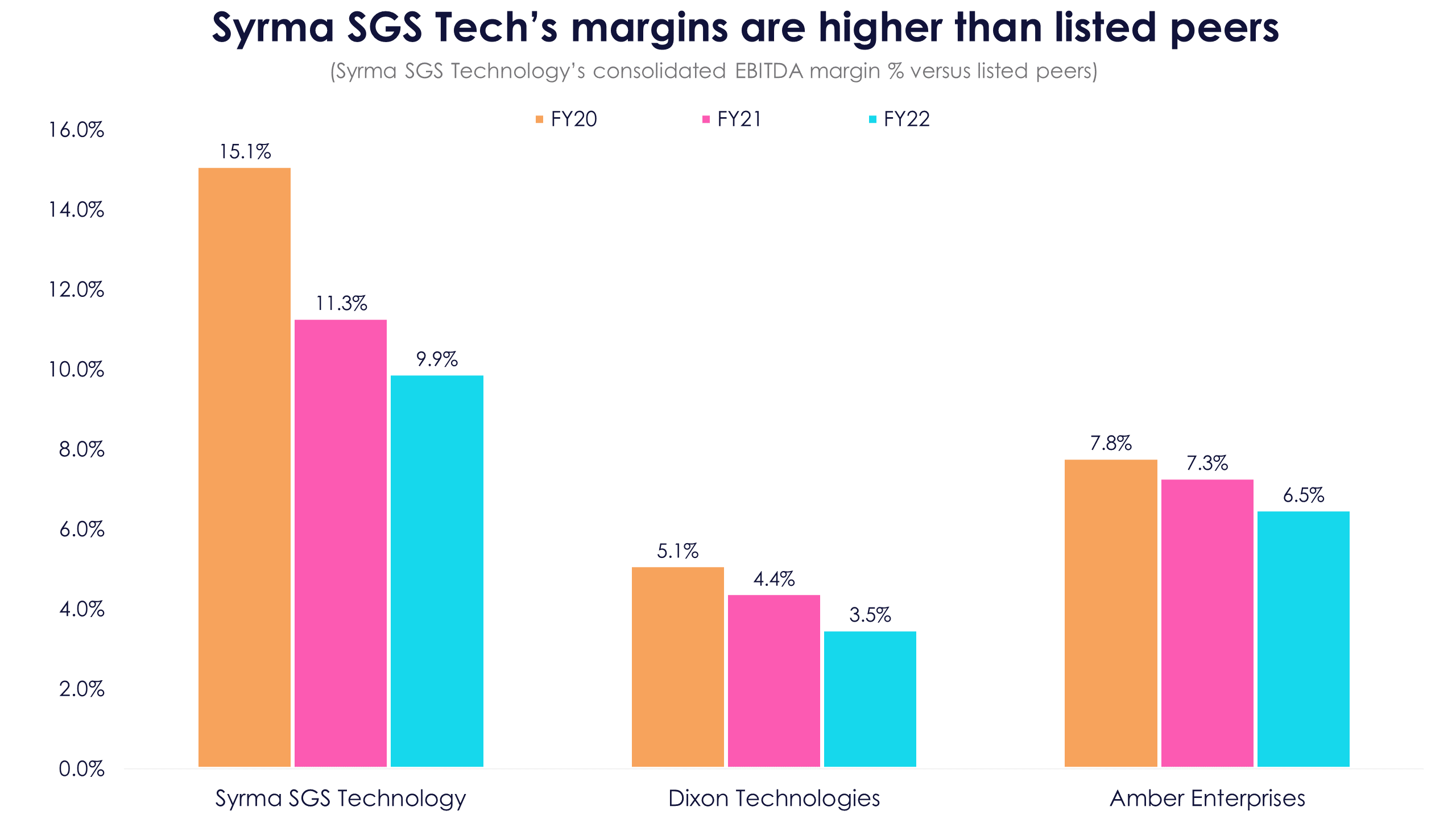 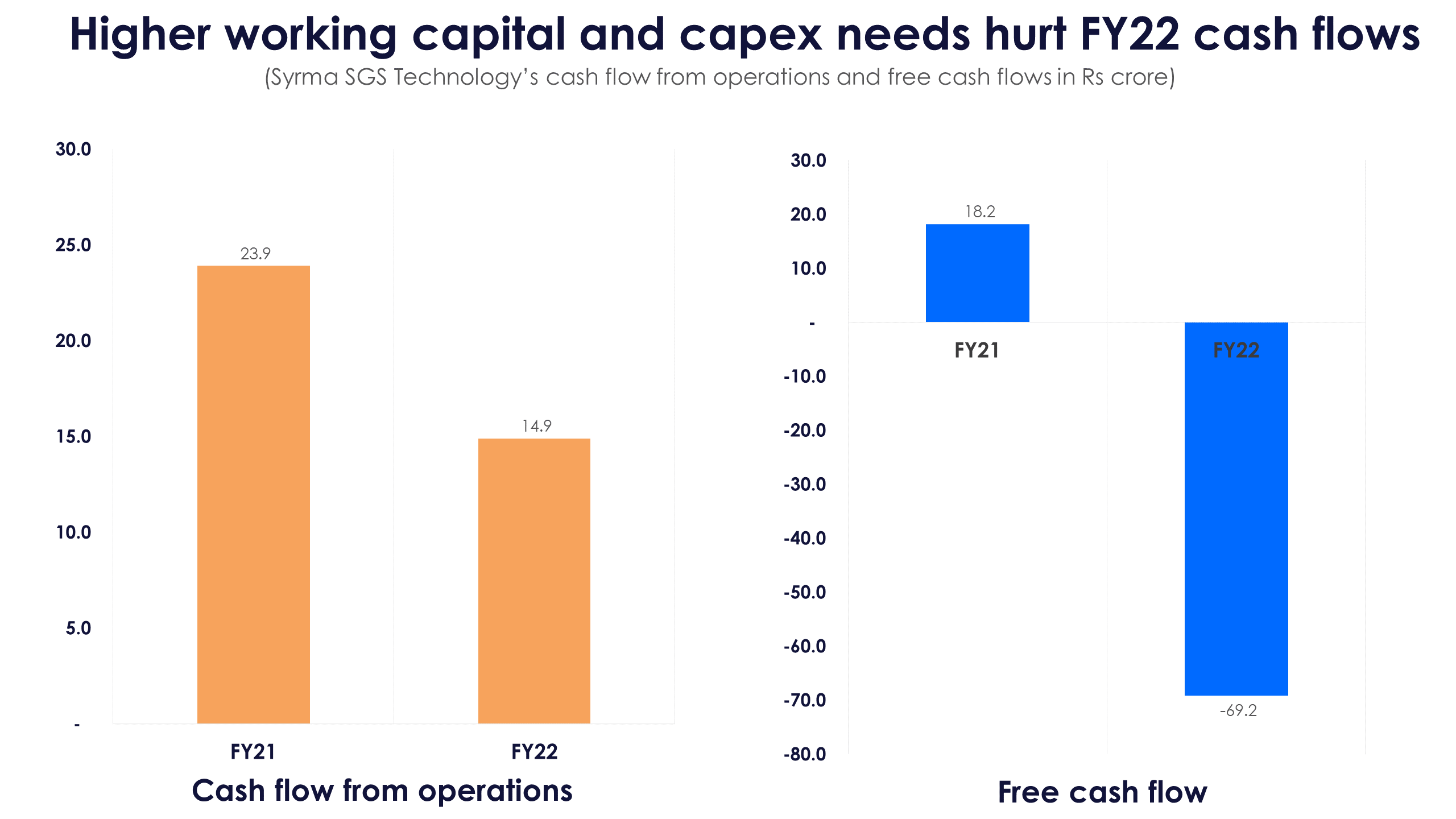 A play on domestic electronics manufacturing

Investors who might look at Syrma SGS Technology’s IPO should note that the company is a play on the growing electronics manufacturing industry in India. According to a Frost & Sullivan report commissioned by the company, electronics is the fastest growing industry in India. At the end of FY21, India’s total electronics market (including domestic manufacturing and imports) was worth $91 billion. This is expected to touch $282 billion by FY26, according to Frost & Sullivan’s report quoted in the red herring prospectus.

The company’s high-quality manufacturing, especially the fact that there was no recall of products by its customers in the past five years, holds it in good stead. Syrma plans to double down on investment in new products and research and development to remain relevant to customers, and expand into newer product categories.

Investors should note that the company will continue to invest in future growth, which means it will need more cash to fuel its expansion into new product categories. Free cash flow generation could consequently be under pressure. Still, there is enough money on the table for retail investors at the current IPO price.

This analysis by Trendlyne is meant for investor education - to help understand companies and make informed investment decisions on their own. It should not be considered an investment recommendation.