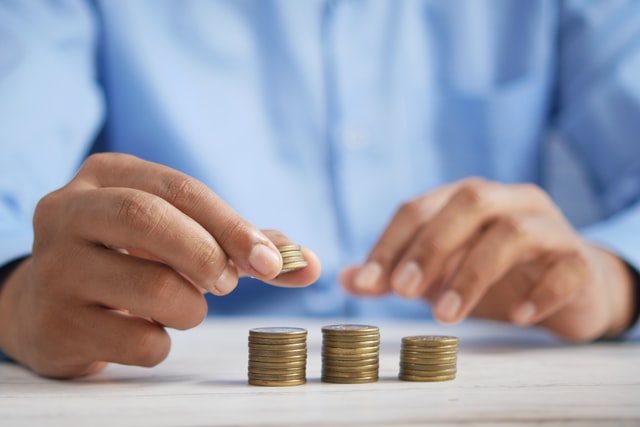 ICICI Lombard has a tepid third quarter but retains leadership

The general insurance industry is going through some tough times over the last few quarters and Q3FY22 was no different. Slowing down auto sales and travel restrictions were dampeners this quarter. The silver lining was the rising sale of health insurance policies as uncertainty of the impact of the third wave loomed large. This quarter also saw the addition of another player in the listed space with Star Health, specializing in health insurance making its debut in December 2021.

Last year the company acquired the general insurance business of Bharti Axa and ICICI Lombard's results for quarters of FY22 reflect post-acquisition numbers. However, since last year's financials were not adjusted, YoY data is not strictly comparable. The merger also added the crop insurance segment that has a high loss ratio, impacting profitability.

ICICI Lombard is the first among the general insurers to declare Q3FY22 results. Listed on the stock exchanges in September 2017, its stock price saw a fall since the Q3FY22 results were declared and the stock has given negative returns over the last year.

The results for Q3FY22 see a nominal decline YoY in revenues and a nominal rise YoY in the profits of the company. While revenues declined marginally YoY to Rs 438.1 crore from Rs 452.1 crore, profits rose YoY to Rs 317.5 from Rs 313.5 crore. The management said it faced challenges in the motor insurance segment with four-wheelers sales impacted by the shortage of semiconductor chips and lower demand for two-wheelers in the festive season. 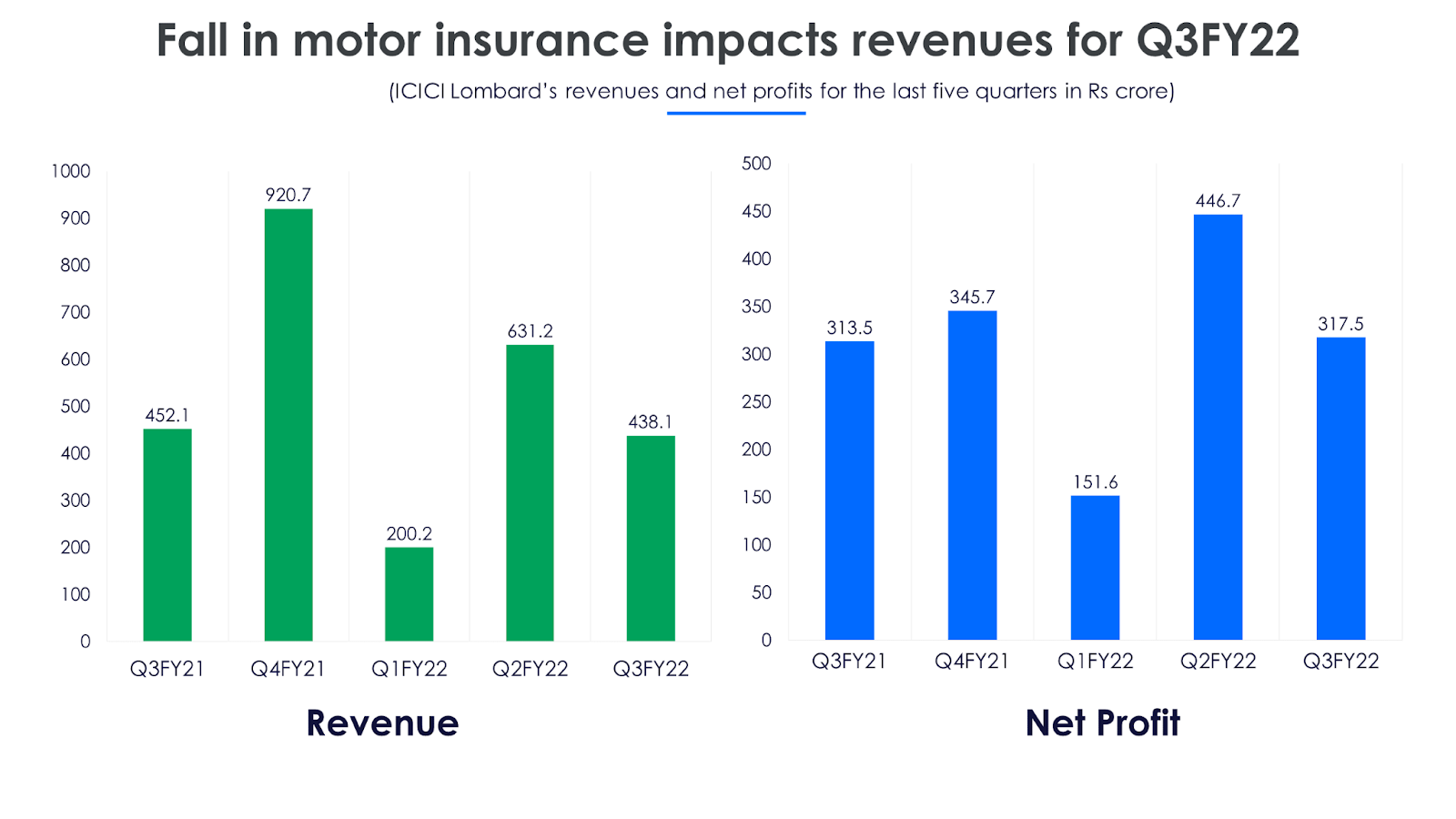 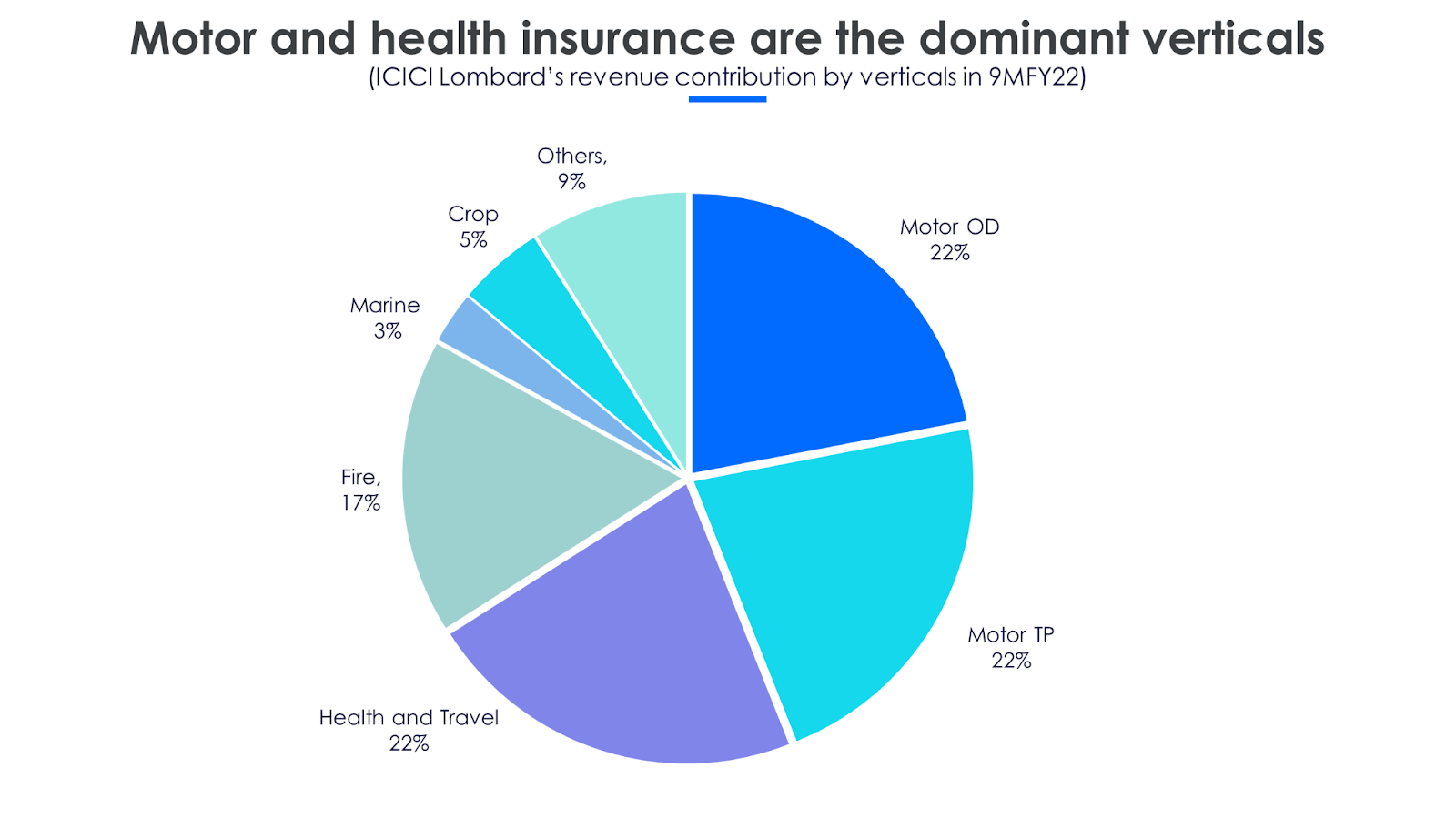 Marine and fire insurance have a smaller share in the overall pie but with a market share of 13% and 18% in their respective segments. Crop insurance was not part of ICICI Lombard’s portfolio, but post-Bharti Axa’s merger with the company, it now constitutes 5% of the product mix.

Going deeper into each vertical, motor insurance has its strength in private car insurance with about 55% of the revenues from this segment. While there is pricing competition on the OD insurance from other players, TP policies pricing is decided by the regulator. The management is hopeful of a price hike for motor TP from the regulator in the next financial year. It expects this segment to do better in the next few quarters as sales of four-wheelers will pick up when the semiconductor shortage is resolved. 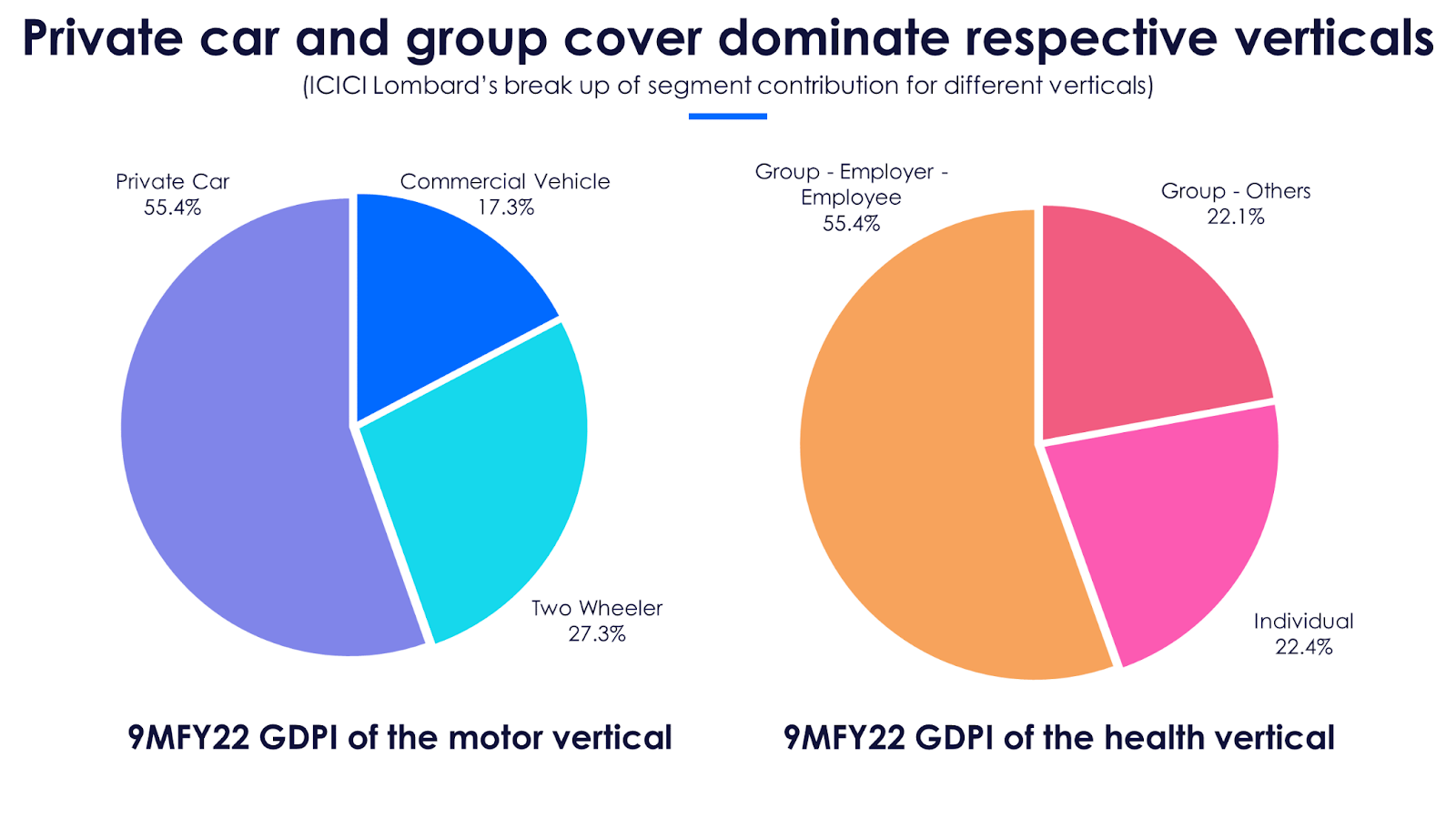 The industry trends point to a few encouraging signs for this sector. The GDPI for the majority of the insurers is rising for the 9MFY22 period as compared to 9MFY21. 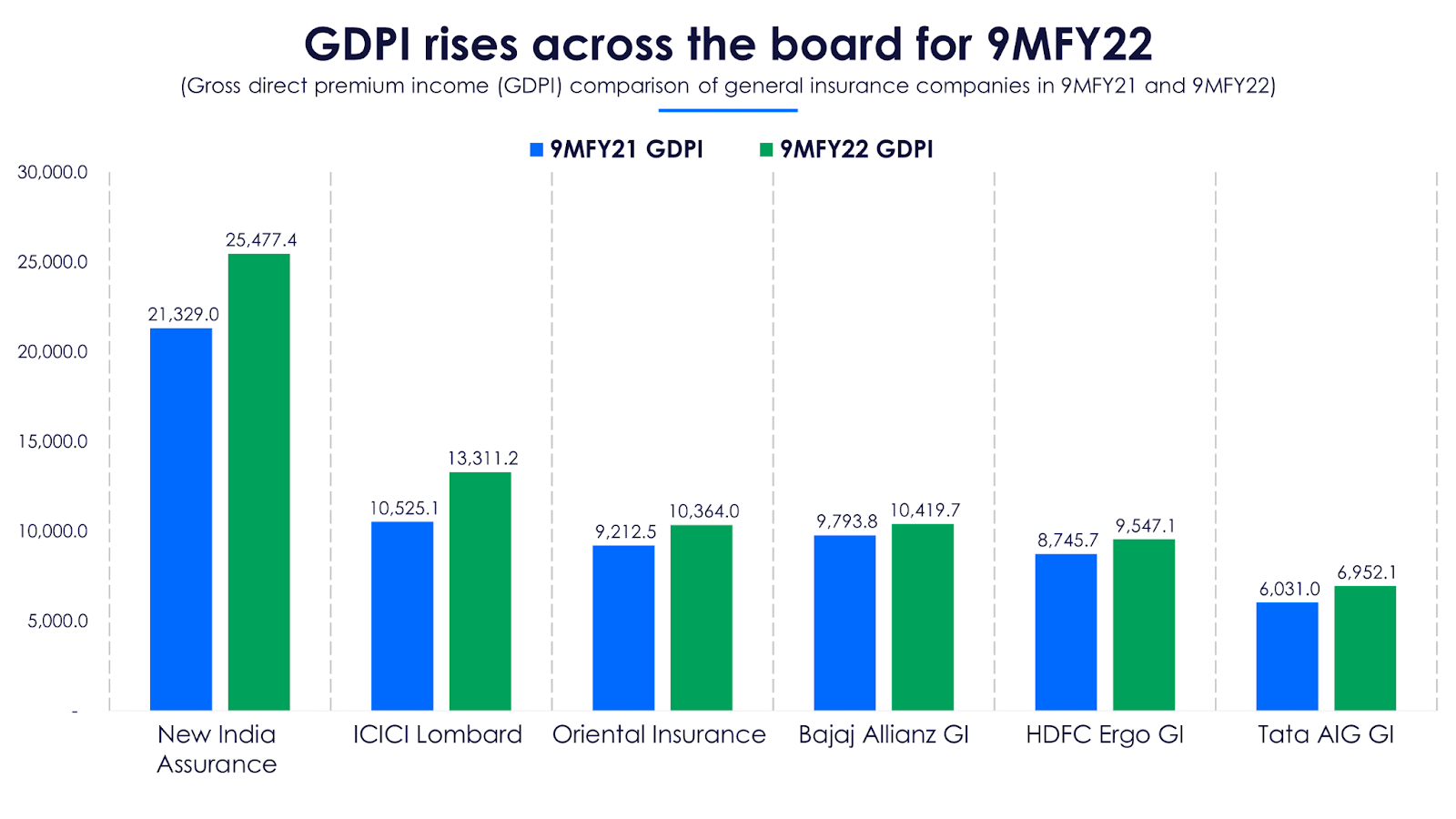 ICICI Lombard also retains the top spot among private insurance players with a 26% YoY growth in GDPI for 9MFY22. Competition from newer companies is perceptible, particularly with players like Acko and Digit who have grown YoY by 151.9% and 91.8% for the same period respectively. They are more technologically focused on business models that are different from traditional models. 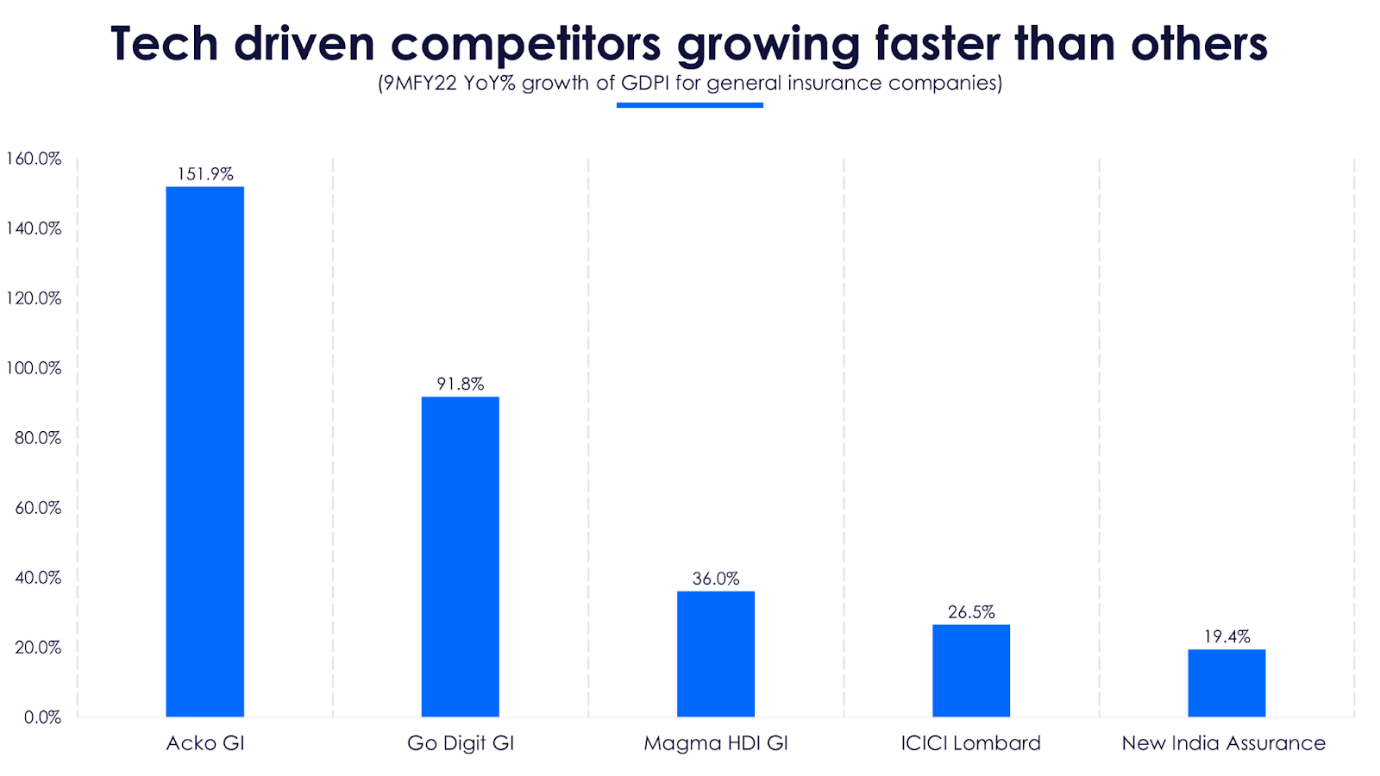 The management addressed this concern raised by an analyst about the age companies during the Q3FY22 earnings conference call. The management said they launched an app ‘IL Take Care’, an integrated digital platform, with a host of features so that customers can avail services digitally. These include booking teleconsultations with doctors, finding the nearest network hospital, renewal of motor and health policy directly via the app.

This app saw more than 11 lakh downloads till 9MFY22. The management is also working to make the customer experience better on this app. Another team is working parallelly to enhance the digital initiatives, including technology spends, to stay ahead of the competition. While new-age companies might be running into losses in a bid to capture market share, the management said ICICI Lombard is focused on profitability without losing market share.

Integration of Bharti Axa yet to play out

Post the merger of Bharti Axa with ICICI Lombard, it is still work-in-progress for seamless integration of both businesses. The process of integration of historical data is expected to be completed over the next two quarters, according to management. Once completed, the integrated data will be able to offer insights that can be leveraged and the benefits would play out from Q2FY23 onwards.

In the current quarter and through 9MFY22, ICICI Lombard has retained its leadership among private insurers. A number of factors that will play out over the next quarter will define its ability to lead the industry. Favourable among them include the resolution of semiconductor shortages and the third wave not being as harsh as the previous two. Travel is also expected to pick up in the coming quarters, which would drive demand for travel insurance. While it appears to be well prepared to take on new-age competitors, the next few quarters will be defining for its leadership position and market share.