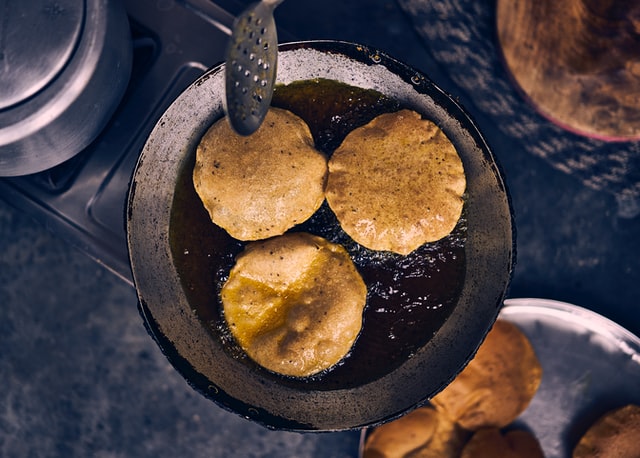 Adani Wilmar IPO: Wafer-thin margins, but focus on food & FMCG could change that

The stock markets are turbulent, and in the midst of this, Adani Wilmar's initial public offering is opening today. The Rs 3,600-crore fresh issue of shares will entail a stake sale …

The stock markets are turbulent, and in the midst of this, Adani Wilmar's initial public offering is opening today. The Rs 3,600-crore fresh issue of shares will entail a stake sale of about 12% by Adani Wilmar's owners. The company plans to use Rs 1,900 crore of the proceeds for capital expenditure or capex, Rs 1,059 crore for repaying or prepaying loans, and Rs 450 crore for strategic acquisitions and investments. The rest will be used for general corporate purposes.

This company sells, among other products, edible oils under the brand name Fortune, King’s, Bullet, Aadhar, and Raag. These include soybean oil, palm oil, sunflower oil, rice bran oil, mustard oil, groundnut oil, and cottonseed oil among others. It also sells pulses, basmati rice, wheat flour, gram flour, and soya chunks under the Fortune brand. It sells soap and hand sanitizers under the Alife. The company also makes oleochemicals and at the end of FY20, it was one of the five largest basic manufacturers of oleochemicals in India. It was also the largest exporter of castor oil and among the top three exporters of oleochemicals.

Adani Wilmar is a joint venture between Gautam Adani’s Adani Group and Wilmar International. The company raised Rs 940 crore from anchor investors on Tuesday ahead of its IPO at Rs 230 per share. This is at the upper end of the IPO price band of Rs 218-230.

At the upper end of the band, the company’s post listing valuation is at around Rs 30,000 crore. This is at around 36.1 times the company’s FY21 earnings. If we annualise the company’s H1FY22 earnings, Adani Willmar’s IPO is valued at 36.9 times. This is far lower than listed FMCG peers like Hindustan Unilever (62.4 TTM PE), Dabur India (53 TTM PE), Britannia Industries (53.5 TTM PE). But when we compare Adani Wilmar’s valuation to edible oil makers like Ruchi Soya Industries (28.4 TTM PE), Adani Wilmar’s IPO seems a little expensive.

Does the underlying business make sense for investors to look at this company’s IPO?

A business with wafer-thin margins

The one thing that investors should know about Adani Wilmar is that its business has extremely thin margins. Here are a few numbers—in FY21, Adani Wilmar earned revenues of Rs 37,090.4 crore. But its net profits were Rs 727.6 crore. That’s a net profit margin of 2%. If we add other income into the mix, there won’t be much of an improvement, hence let us keep that aside. 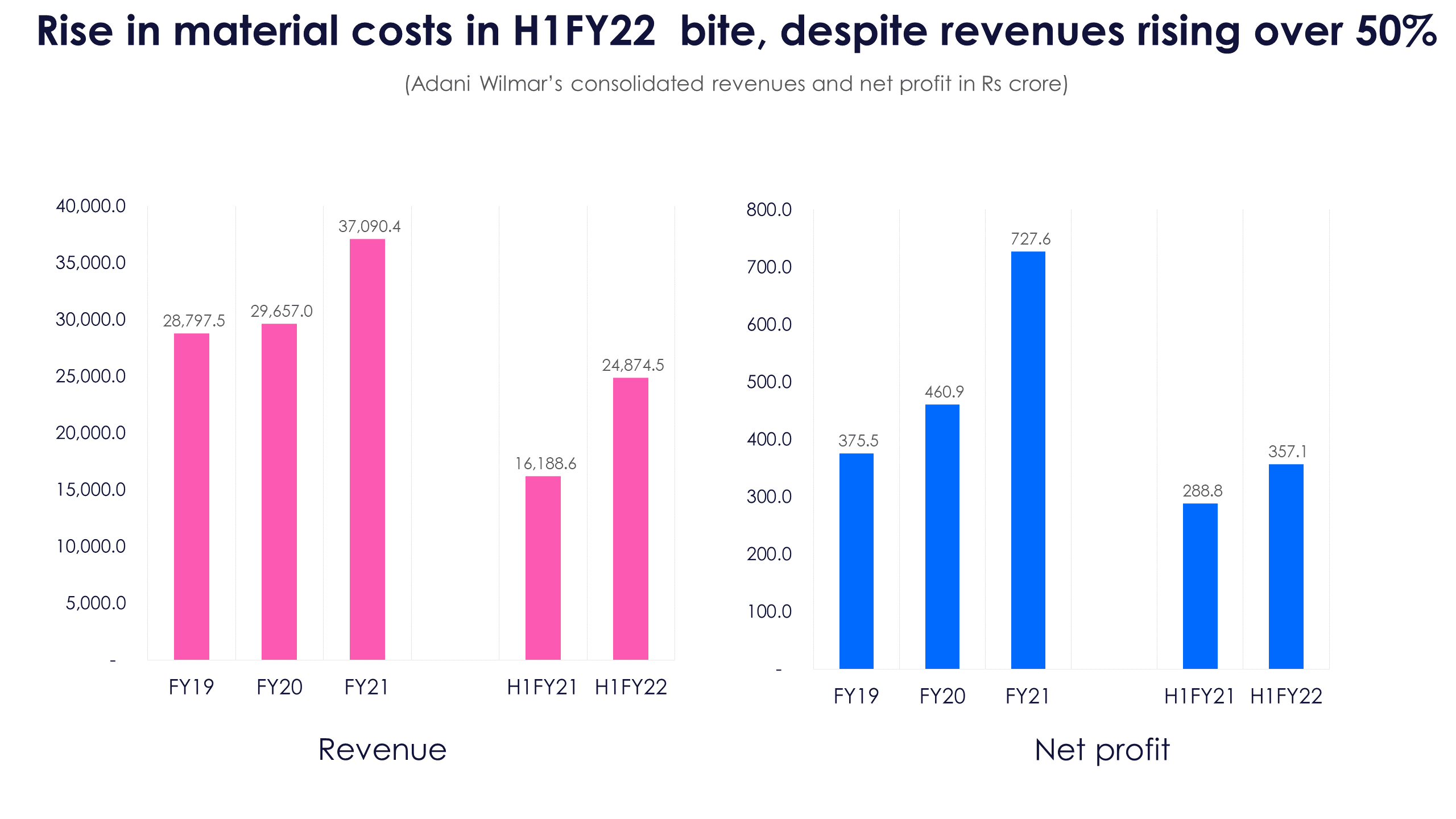 Even though the company’s revenues for H1FY22 were higher on a YoY basis (and so was its net profit), the net profit margin actually fell 40 bps to 1.4%. If you are wondering why we are labouring over net margins instead of EBITDA margins, well, this is what that metric shows— 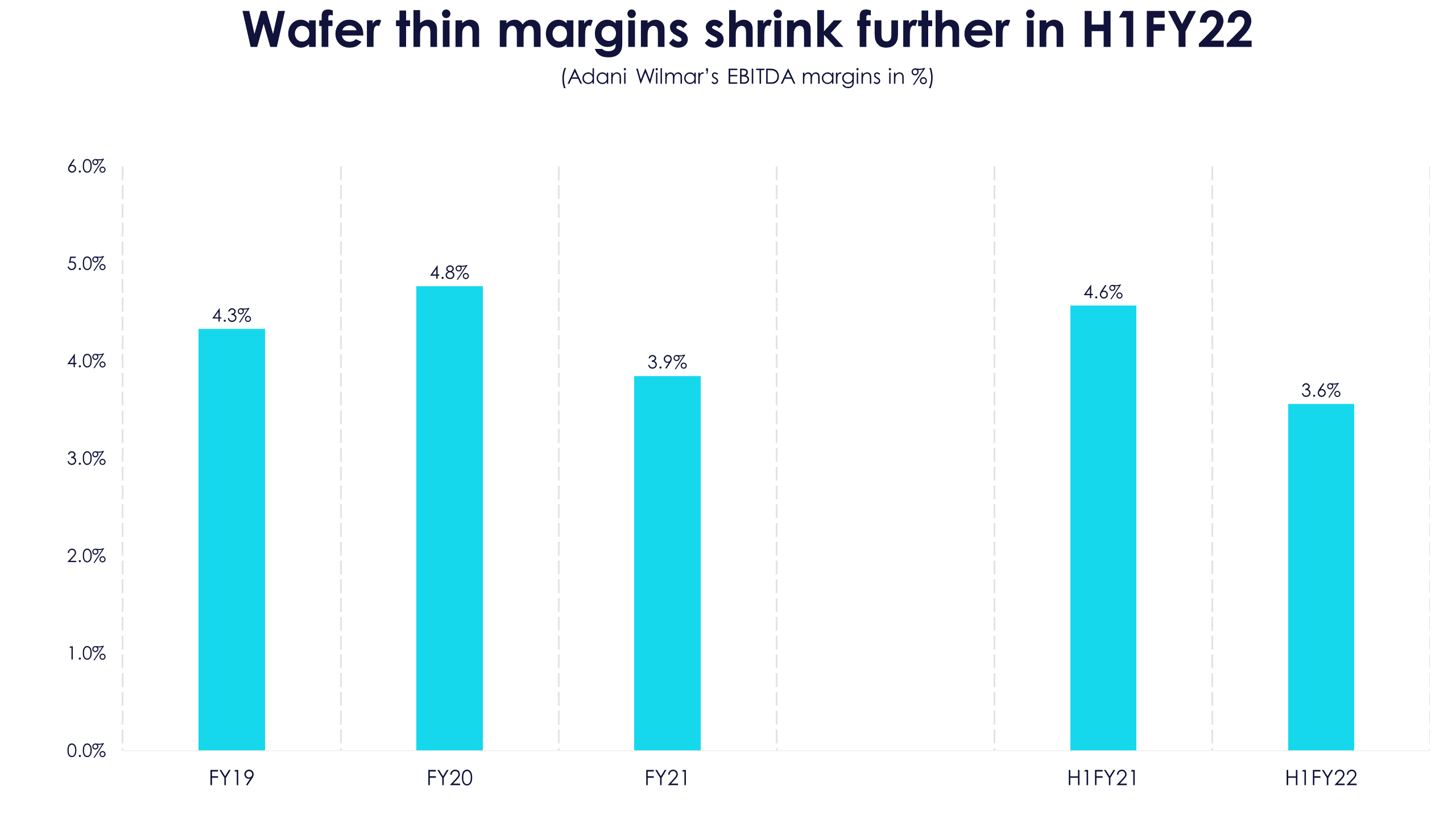 Still wafer-thin right? This is because while the company’s revenues rose 53.6% YoY during H1FY22, its raw material costs rose nearly 62% in the same period. There has been a spike in edible oil prices which has pinched Indian pockets over the past couple of years. This is probably reflected in the higher rise of raw material costs compared to revenues.

The company’s cash flows, despite all this, sustained at the same level in H1FY22 compared to a year ago. 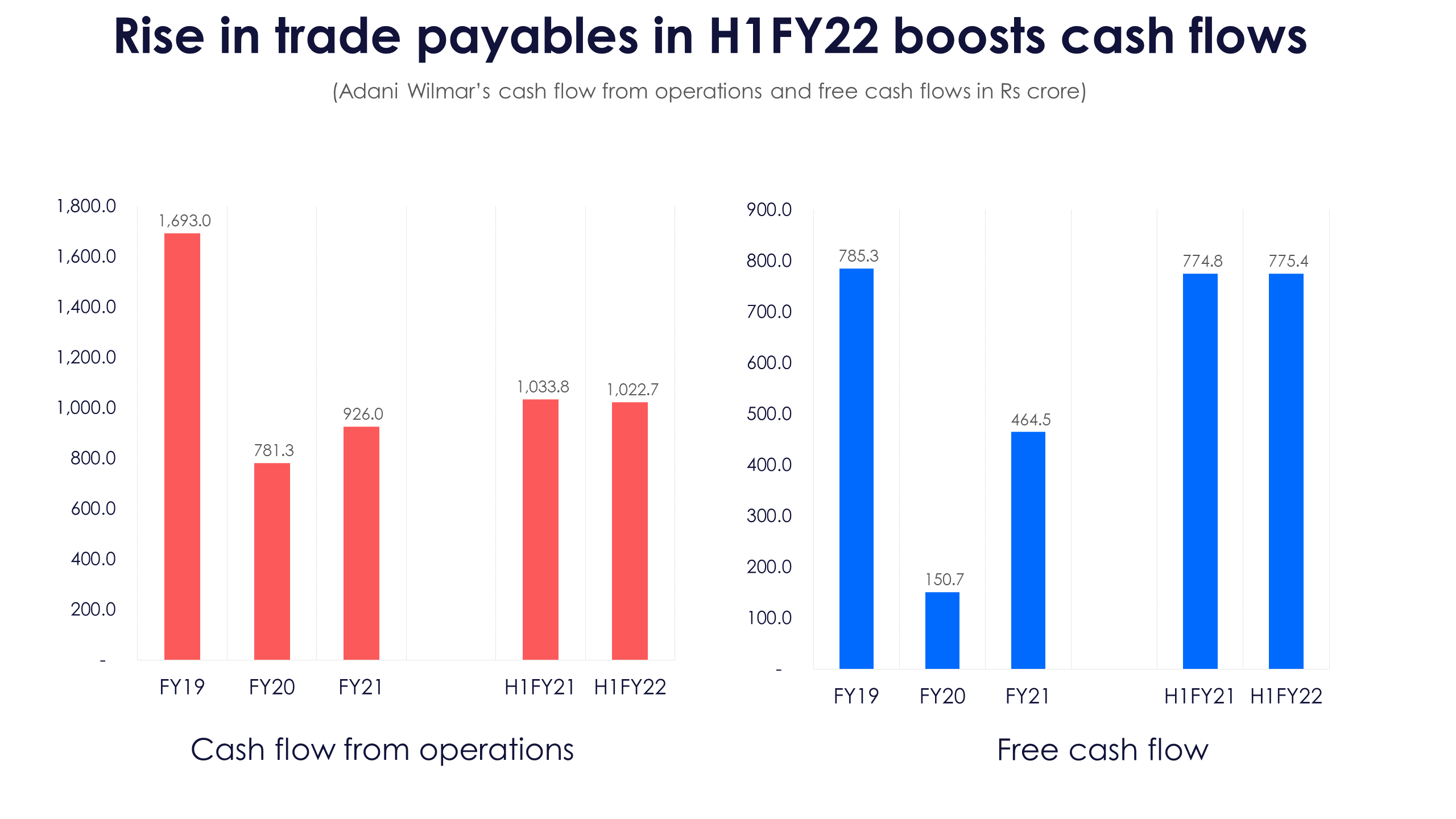 Adani Wilmar’s Fortune edible oil range is the market leader in the branded edible oils space (market share of 18.3% at the end of FY21, according to Nielsen). But India’s over-reliance on imports to meet its edible oil needs means the company’s business will be impacted by global commodity price changes. And this dependence will continue for some time. 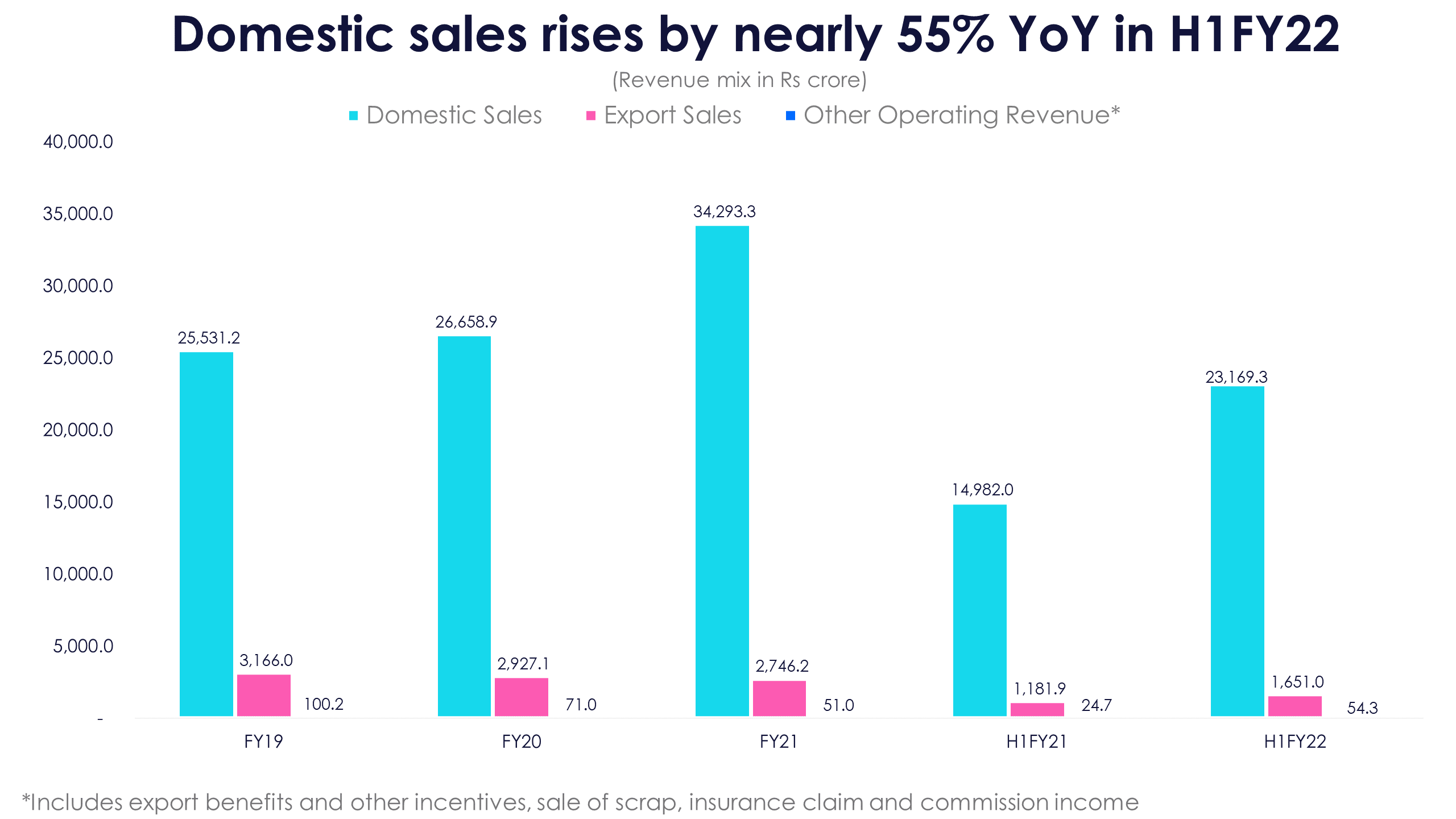 What works for the company is that it is part of the Adani Group. This means its 22 plants are strategically located across 10 Indian states. It operates 10 crushing units and 19 refineries at these plants. Out of the 19 refineries, ten are based out of ports which helps the company use the imported edible oils there itself for refining, rather than spend money on transportation. The remaining refineries are located in the hinterland close to where the raw materials are produced to help reduce storage costs. The company’s refinery at Mundra is the largest at a single location, according to Technopak.

The company plans to set up more integrated manufacturing facilities where it will set up more food processing units in the same location as its crushing units or refineries. The company is planning to also build refineries, dal plants, and extraction plants, among others through the funds raised from the IPO.

It also plans to acquire businesses in the edible oil and food industry to expand its presence in South India, where regional companies are stronger. Its strategy includes the acquisition of brands in the food and FMCG space to expand its portfolio, and increase its manufacturing capacity and distribution access. Additionally, it also plans to expand into the ready-to-eat and ready-to-cook space through acquisitions. This is where the Rs 450 crore earmarked for the acquisition will probably be deployed.

If investors like a business that is growing at a fair clip, but with concerningly small margins then Adani Wilmar might interest them. Changes in commodity prices up or down will significantly impact financials.  They should also keep in mind that the company operates in a competitive space. The future prospects of the company are contingent on its expansion into multiple product categories to help transform Adani Wilmar into a full-fledged FMCG company. For context, at the end of FY21, nearly 65% of the company’s sales volumes came from edible oils and 11% from food and FMCG. Till this transformation pays off, the company’s margins will be slim pickings