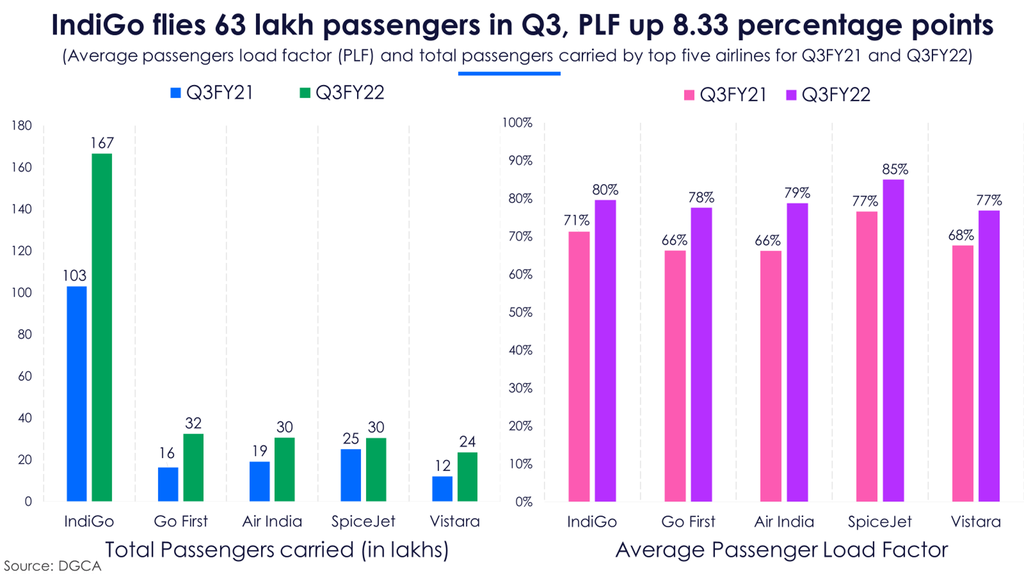 Although passenger traffic is up 33% YoY and airlines carried nearly 8.35 crore passengers in 2021, the 2019 level of 14.4 crore passengers is so far, out of reach. This was especially due to weak demand from the corporate traveler segment. Domestic air passenger traffic rose over 2X on a YoY basis in Q3FY22 to 3.03 crore, thanks to low Covid 19 infections and holiday travel. The festival rush made headlines - the media   reported serpentine airport queues, missed flights, and arguments over people trying to skip the line.

The rise in passenger traffic by 1.08 crore in Q3FY22 had a positive impact on the passenger load factor (PLF) of major airlines. PLF measures the capacity utilization of an airline. The average PLF for the top five airlines rose to 79.5% for Q3FY22, up 10 percentage points from 69.6% in Q3FY21. Market leader InterGlobe Aviation (Indigo) flew 63 lakh more passengers in Q3FY22 and improved its PLF by 8.3 percentage points. Surprisingly, Air India’s average PLF in Q3FY22 jumped 12.5 percentage points YoY, the highest amongst the other top airlines.

Go First not only improved its average PLF by 11.2 percentage points in Q3FY22, but also captured higher market share, flying past Air India and SpiceJet, as the new number 2. This development comes ahead of the company’s planned  Rs 3,600-crore IPO. Recent reports suggest that the IPO might be postponed.

While the airlines witnessed meaningful recovery in Q3, their happiness is likely to be short-lived owing to the third wave of the pandemic in India. With the fall in leisure as well as business travel, air passenger numbers fell to around 2.4 lakh on January 9, down from 3.85 lakh recorded on December 26. Anticipating a weak Q4, airlines like Indigo have already withdrawn 20% of their capacity in January 2022.

The rating agency ICRA released another grim statistic for the airline industry recently. The industry is staring at a loss of Rs 25,000-26,000 crore in FY22. Not surprisingly, the CEO of Indigo called the sector “chronically ill” and sought immediate relief from the government. Yet another disappointing quarter lies ahead for investors.