Solar Industries – An explosion of opportunities in the defence sector

On hearing the name Solar Industries, one expects a company that is active in the clean energy space and represents increasing adoption of solar energy.

Switch to an annual plan at a reduced price

On hearing the name Solar Industries, one expects a company that is active in the clean energy space and represents increasing adoption of solar energy.

But this is the largest manufacturer of industrial explosives and explosive initiating systems in India and owns the world’s biggest manufacturing facility for packaged explosives. It is emerging as one of the biggest private-sector defence suppliers and is the first private sector company to supply grenades to the Indian armed forces.

Solar Industries has a licensed explosives capacity of about 290,000 MT (metric tonnes) per year, with a 28% market share in India. It also leads exports from India in industrial explosives and initiating systems, with around 70% market share of exports from India. In recent years, Solar Industries expanded its manufacturing base to Nigeria, Zambia, South Africa, Turkey, Ghana, and Australia. It also has stakes in coal mines (in Chhattisgarh) through two JVs (joint venture).

First mover among the private sector to secure defence orders

Over the past five years, the company’s annual revenues grew at 7% CAGR and the profits grew at 7.5% CAGR. One of the prime factors behind this growth is the opening up of defence production to private companies. Till 2015, defence production was exclusively the domain of government-owned companies. Solar Industries is one of the first private sector companies to get orders to supply grenades to the armed forces. All defence related orders are executed via Economic Explosives Limited, a wholly-owned subsidiary of Solar Industries. 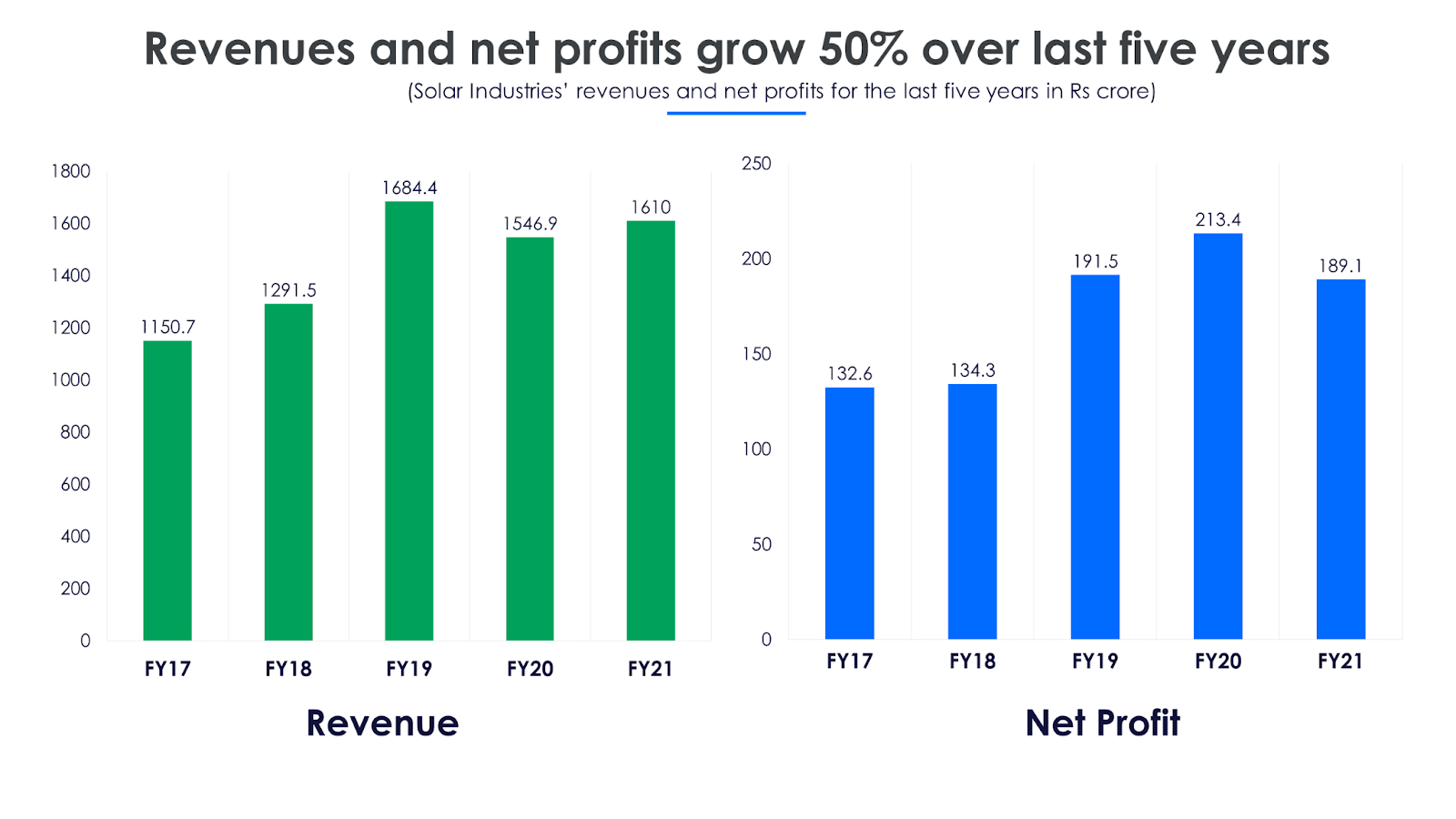 Solar Industries is also the beneficiary of the ToT (transfer of technology) from DRDO (Defence Research and Development Organisation) for mass production of a crucial solid propellant booster of missiles. This is part of the government initiatives for self-sufficiency in defence. The propulsion system for the Brahmos missile currently imported from Russia is being replaced with an indigenous one. 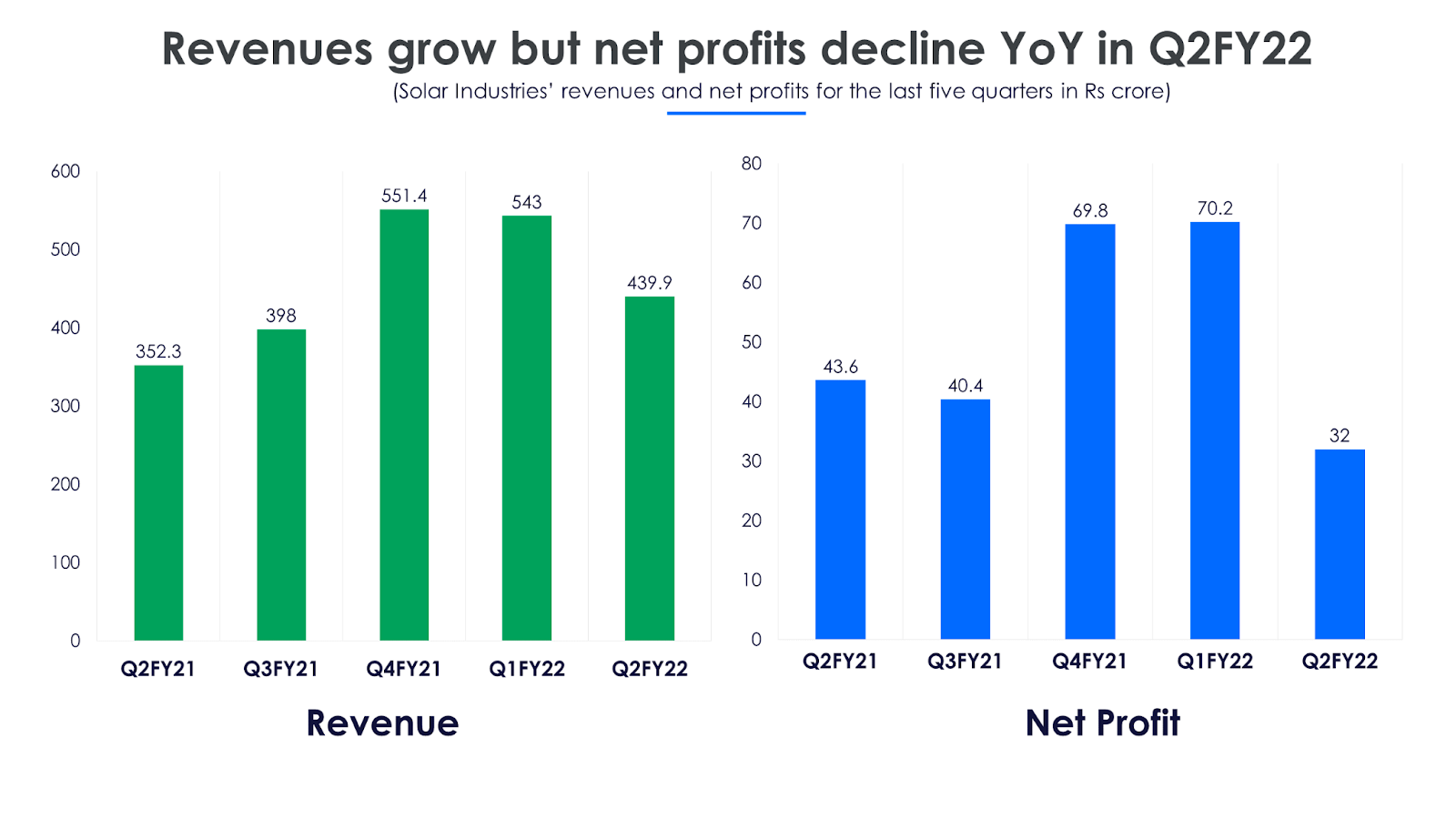 The company generated revenues of Rs 1,613 crore in H1FY22, its highest for the first half of any financial year. The management revised its guidance for revenue growth from 25-40%, and for volume growth in the region of 20-25% in FY22.

Government policies related to housing and infrastructure, private coal mining and push for ‘Make in India’ defence products are triggers that the company is banking on for better performance in coming quarters. Coal mining requires a continuous supply of explosives in mines, and new private coal mines present an opportunity for the company. Explosives find application in housing construction for breaking hard rock for foundations and basement excavations in hard terrains. Similarly in infrastructure projects, explosives are extensively used for making tunnels and road construction in hilly areas. 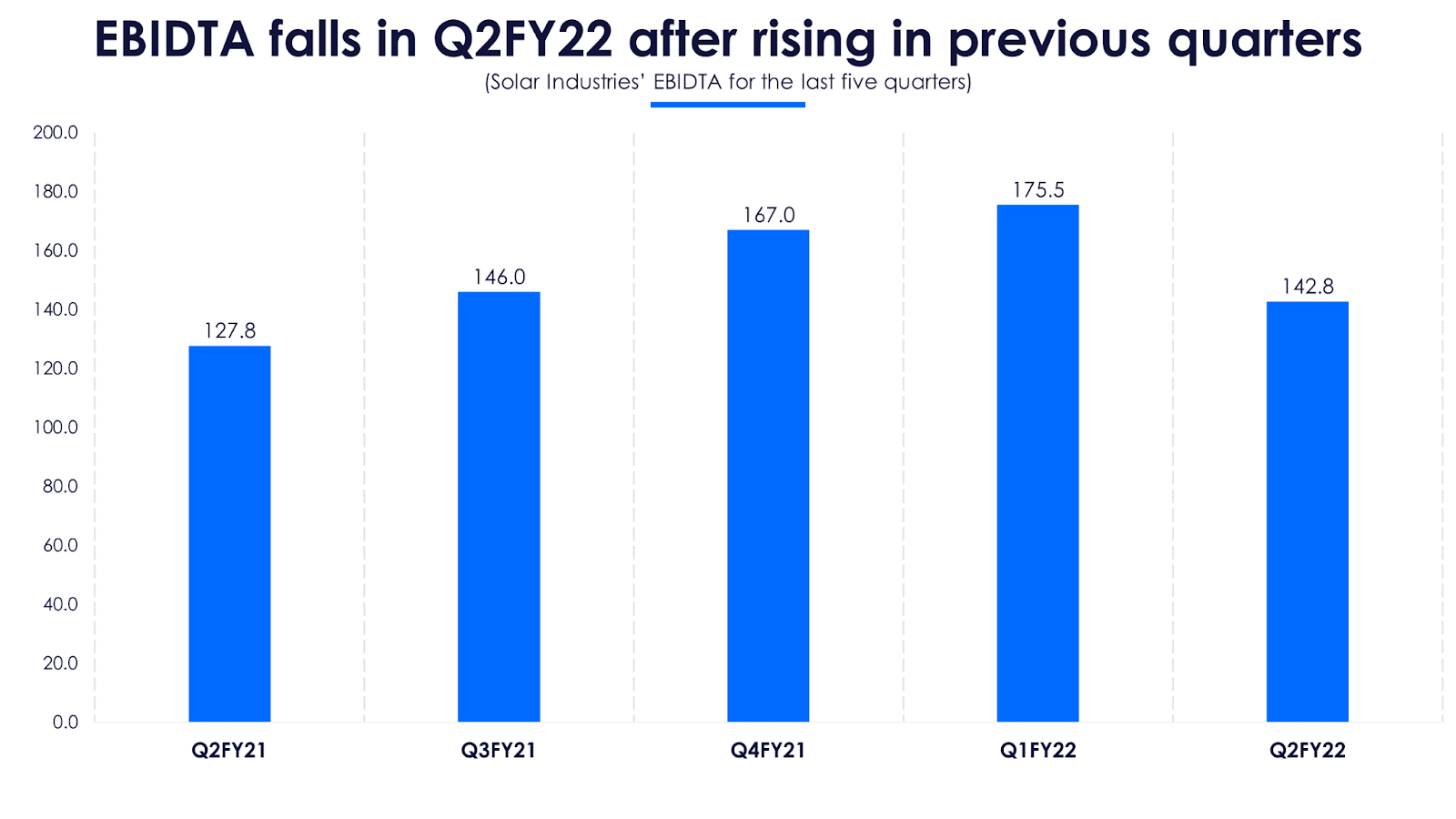 Though revenues grew YoY in Q2FY22, profits were impacted due to high commodity prices, disruption in supply chains, foreign currency exchange prices and fear of the third wave of Covid-19. The management in a conference call with analysts said that it was not possible to fully pass on the price rise to its customers. However, going forward, the company will pass on some part of the price rise to customers with a lag of one to three months.

The revenues are fairly diversified with exports contributing to almost half of the revenues. Among the others, Coal India as a customer contributed 15%, for the supply of bulk explosives.

The current order book for FY22 stands at Rs 2,842 crore with Coal India contributing Rs 1,471 crore and defence segment orders worth Rs 576 crore due to the recent order of multi-mode hand grenades. 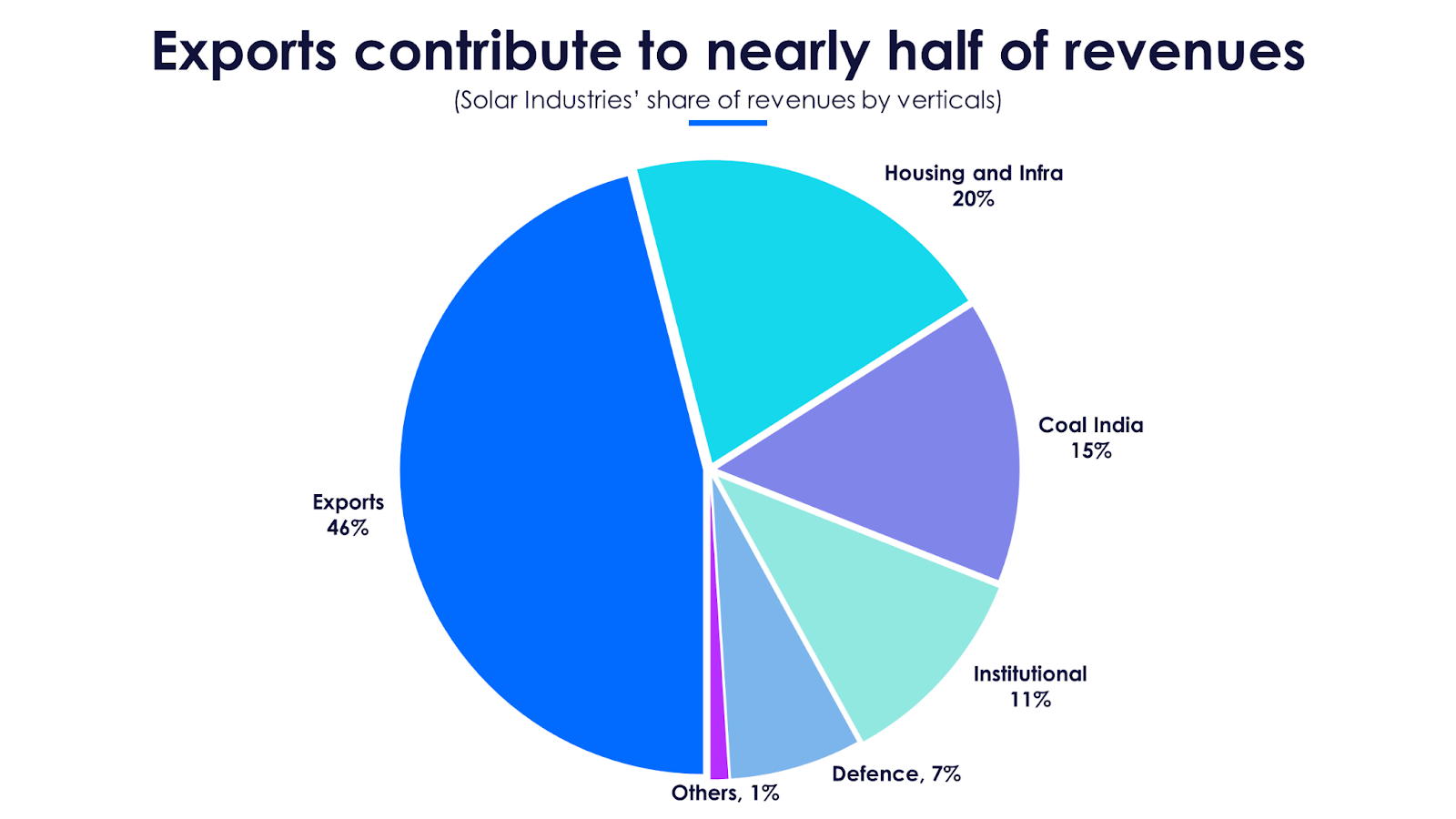 The order book from the defence segment is expected to grow due to orders for rocket launchers. Solar Industries is expanding its capacity, product mix and presence both domestically and internationally. The company is planning to set up two new plants in India. Out of the planned capex of Rs 315 crore in FY22, Rs 137 crore has been utilized in H1FY22.

International operations in Turkey are normal, while Africa is facing logistics disruption and raw material price hikes. In Tanzania, the new project is almost complete and production is expected to commence from November 2021. The Australian project is running late due to the pandemic and heavy monsoons, but it is expected to be completed in FY22 with production starting from Q1FY23.

The Gati Shakti Master plan announced by the government of India is expected to expedite projects across the country. Under this project, the government has got sixteen ministries like roads, railways, power, gas, shipping, etc. on one platform for coordination of various projects between ministries as well as the central and state governments. Solar industries is expected to benefit from many infrastructure projects under this plan for the explosives vertical.

In August 2021, Solar Industries handed over the first batch of one lakh indigenously designed and manufactured modern hand grenades to the Indian Army. The first consignment of 40,000 multi-mode hand grenades (MMHG) will replace the British era design of hand grenades being used by the country’s Army to date. Armed Forces in many Commonwealth Nations, including India, are still using the vintage hand grenades designed by the British way back in 1915. This is the first instance of ammunition being manufactured by the private industry in India.

Apart from current orders, Solar Industries is also making inroads in space technology with rockets. The company has successfully developed prototypes for armed drones for the Indian Army.

While the developments in the last few years are positive for the company, there are several risks associated with the business. With products such as explosives and ammunition, a lot of information is not available in the public domain due to confidentiality agreements. With arms and explosives being a sensitive products, even one incident of misuse can blow up the company’s reputation. These risks should be considered before investment.

With current orders across different verticals, potential orders from defence, expanding international operations and exports, Solar Industries is on the verge of being one of the leading private sector arms suppliers to the armed forces and one stock that might interest investors looking for a unique theme.