It might be fortuitous that Krsnaa Diagnostics’ initial public offering (IPO) comes a few weeks after Thyrocare Technologies’ promoters cashed out by selling to PharmEasy. But the diagnostic space is now in the spotlight, with at least one more IPO lined up over the next several ...

It might be fortuitous that Krsnaa Diagnostics’ initial public offering (IPO) comes a few weeks after Thyrocare Technologies’ promoters cashed out by selling to PharmEasy. But the diagnostic space is now in the spotlight, with at least one more IPO  lined up over the next several weeks. Krsnaa Diagnostics’ IPO opens on August 4, the same day as Devyani International, Exxaro Tiles, and Windlas Biotech.

The Pune-based diagnostic services provider primarily operates through a public-private partnership model in 14 states across the country. It provides several specialised diagnostic services like pathology and radiology. But concerns about its debt levels, historic negative net worth, and dependence on government tenders remain. How do these issues weigh while evaluating Krsnaa Diagnostics to its other listed peers in the diagnostics space?

Public will hold 64% of Krsnaa Diagnostics

Krsnaa Diagnostics is a family business whose promoter is Rajendra Mutha. The promoter group consists of members of Mutha’s immediate family and Krsna Diagnostics (Mumbai), an entity controlled by the Mutha family.

Krsnaa Diagnostics is valued at 77.9 times its FY21 earnings, which is higher than listed diagnostic chains like Thyrocare Technologies and Dr. Lal Pathlabs. However, its valuation remains below healthcare services providers like Metropolis Healthcare and Artemis Medicare. 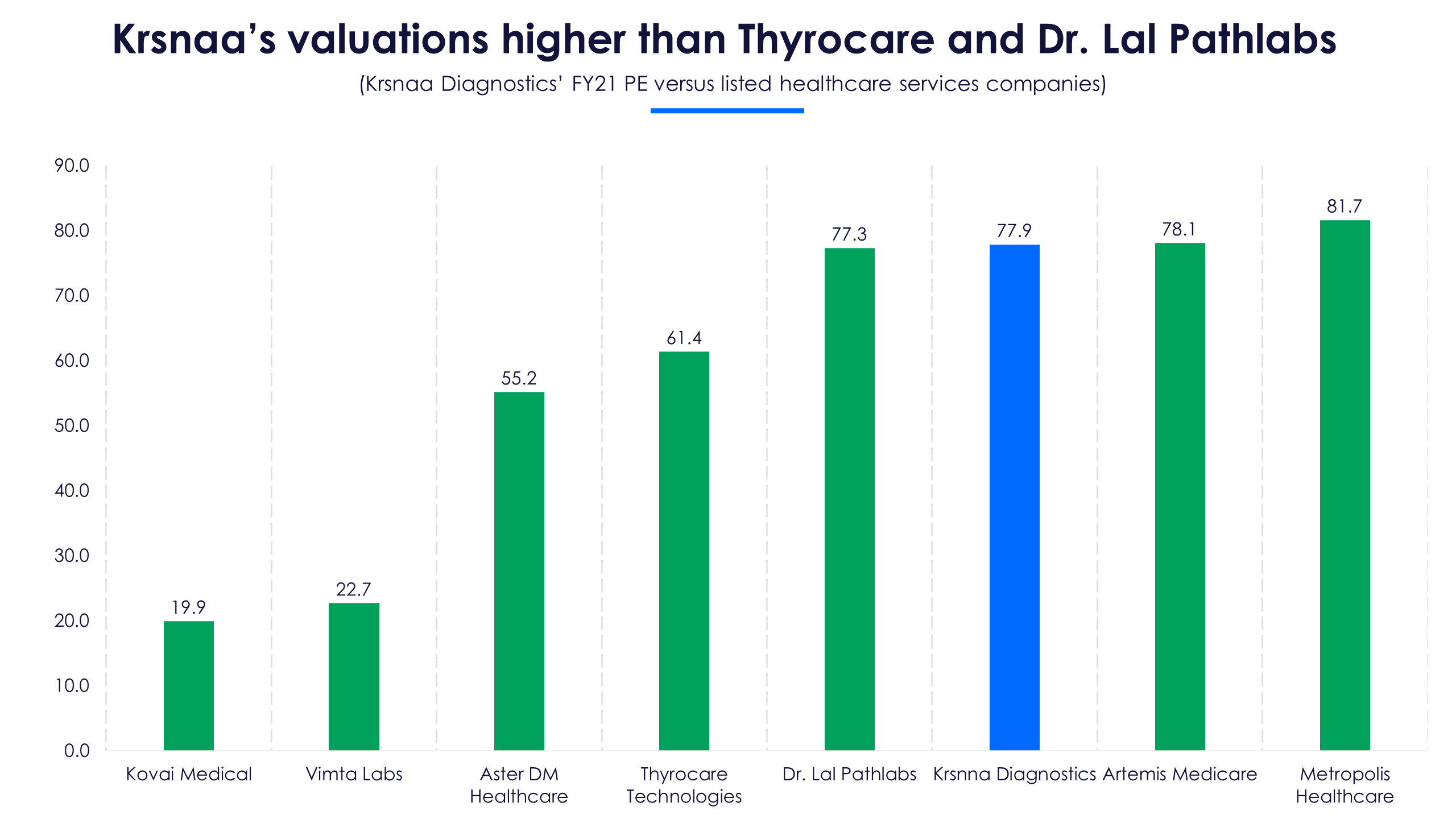 From the Rs 400 crore proceeds of the fresh issue, the company will use 38% (Rs 150 crore) to establish diagnostic centers in Punjab, Karnataka, Himachal Pradesh, and Maharashtra. Another Rs 146 crore (36% of the proceeds) will be used to reduce debt. 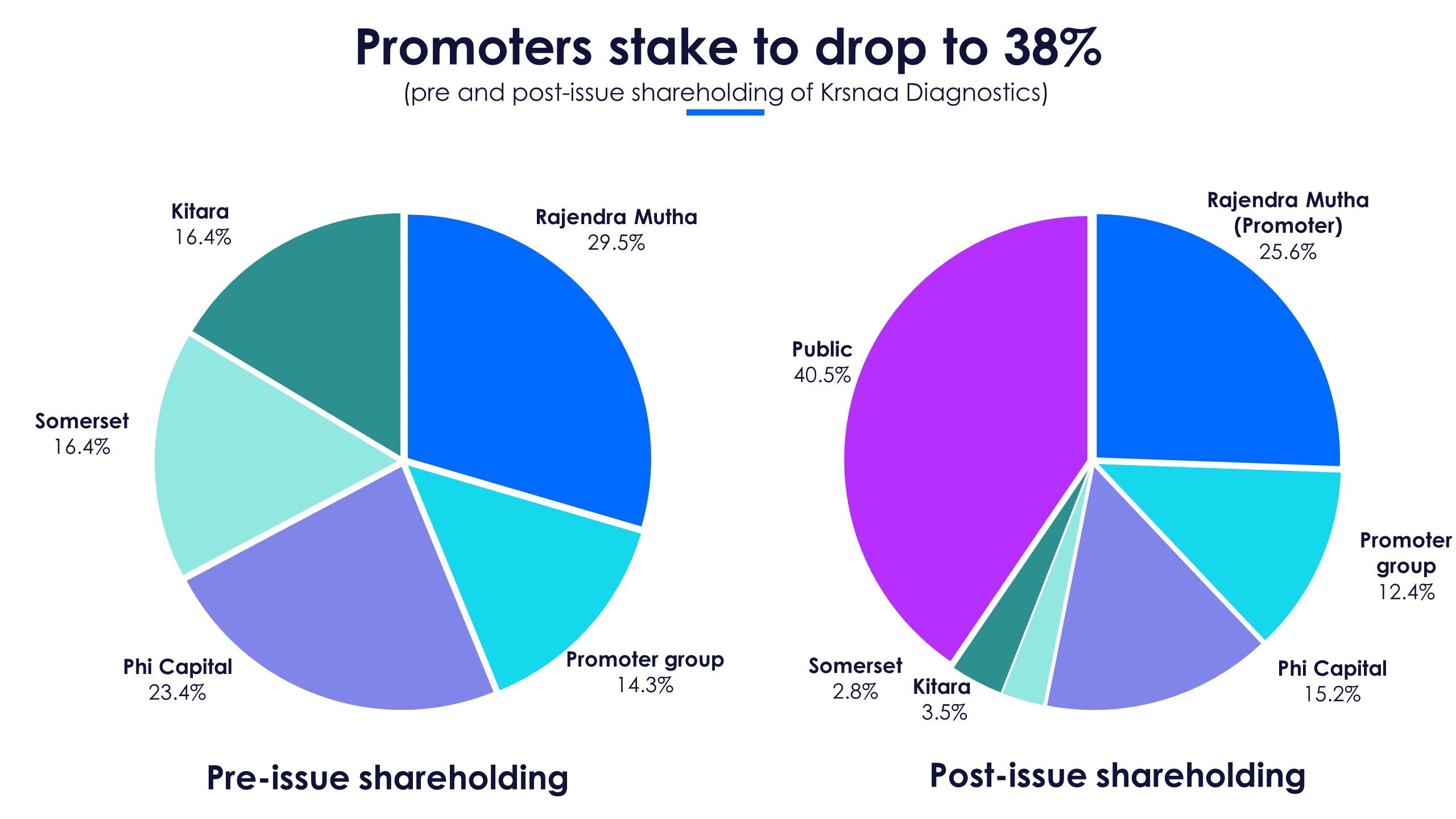 In FY21, Krsnaa Diagnostics’ board approved a 1:2 stock split which came into effect on April 25, 2021. Interestingly, on July 23, 2021, Phi Capital converted 6.07 lakh preference shares into equity shares at an average price of Rs 125 per share or 86% below the upper price band.

Somerset Indus, Kitara Capital, and Somerset India’s founder Mayur Sirdesai converted 81.2 lakh preference shares to equity shares, which were acquired at an average price of Rs 61.5, or 91% below the upper price band.

During the pre-IPO discussion call with analysts, Yash Muthu, Krsnaa Diagnostics’ whole time director said the preference share gains were a one-time adjustment. He said the compulsory convertible preference shares (CCPS) issued to institutional investors (Phi Capital, Kitara Capital, and Somerset Indus) had a derivative component which meant it could not be converted into equity shares on a 1:1 basis.

This resulted in preference share liabilities leading to expenses (in FY19 and FY20) in the company’s profit and loss statement. As the company crossed the Rs 250 crore revenue threshold in FY21, as per the Indian Account Standard (IndAS) these charges were waived off. This led to the company recognizing a gain of Rs 252.2 crore in FY21. Muthu said the adjustments of CCPS into equity shares are completed and will not take place in future.

Krsnaa Diagnostics provides diagnostic services in a range of fields including pathology, and medical imaging through radiology. It provides radiology services like X-rays, computerized tomography (CT) scans, and magnetic resonance imaging (MRI) scans through its 1,823 diagnostic centers in 14 states.

In FY21, 41% of its annual revenues came from radiology services at Rs 161.8 crore, down by 3% YoY. Pathology revenues during the year rose by 2.5X to Rs 234 crore in FY21 due to higher Covid-19 tests conducted. The pathology vertical contributed nearly 60% of revenues in FY21 (from 35% of revenues in FY20). The growth in pathology revenues was despite the company conducting 63 lakh tests, 12% lower than the previous year. 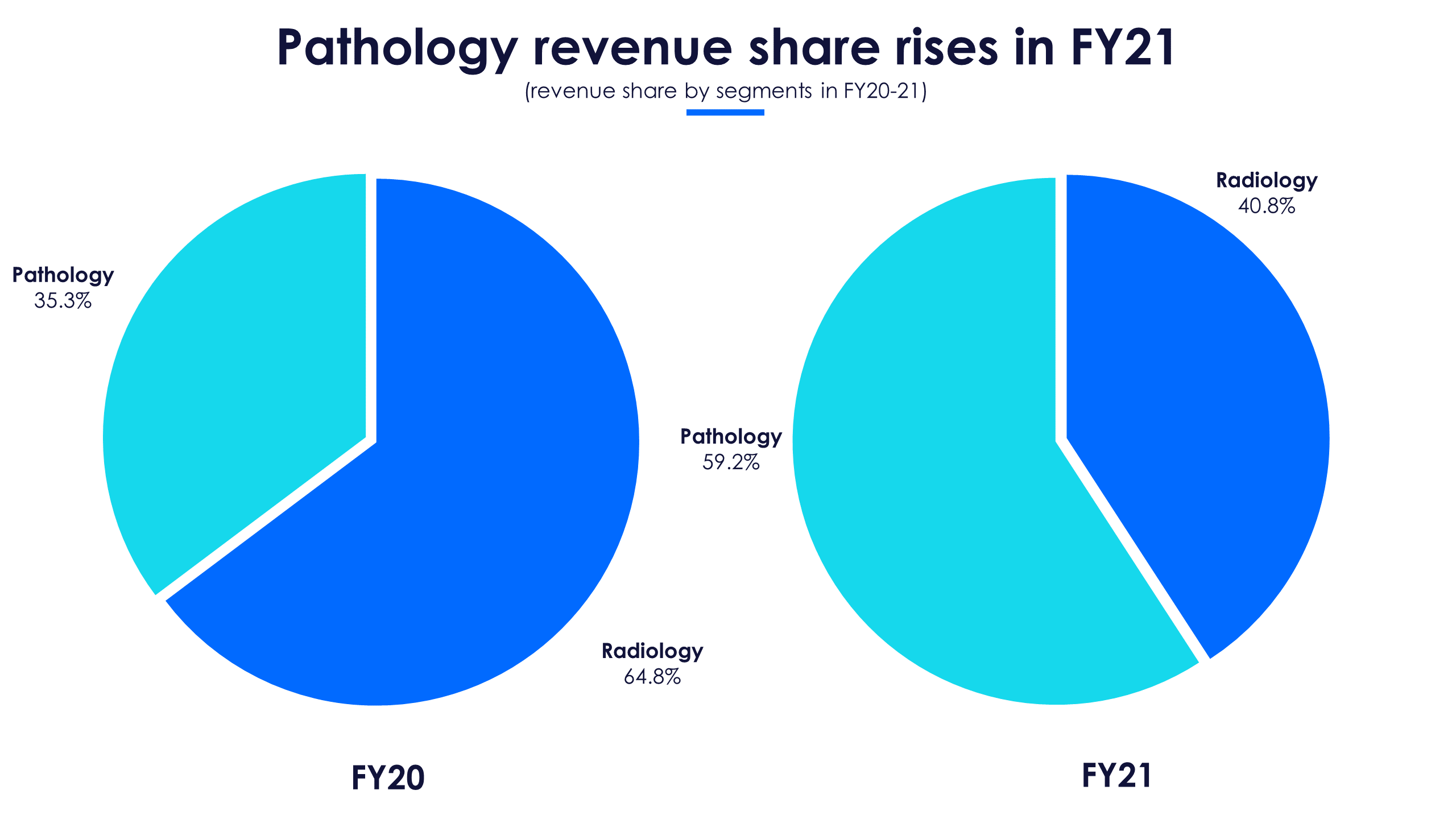 In FY21, the company won eight tenders to establish diagnostic centers in Assam, Jammu, and Kashmir, Maharashtra, Punjab, and Madhya Pradesh. This led to a 42% increase in its revenue from contracts with public health agencies in FY21 to Rs 267 crore. Between FY18 to FY21, the company’s revenues grew at a compound annual growth rate (CAGR) of 67%. Krsnaa Diagnostics started collaborating with private healthcare providers in FY19, setting up 14 diagnostic centers. This increased to 26 centers by March 2021. In FY21, Krsnaa Diagnostics’ revenues from contracts with private healthcare providers were Rs 129 crore, an 84% growth YoY. 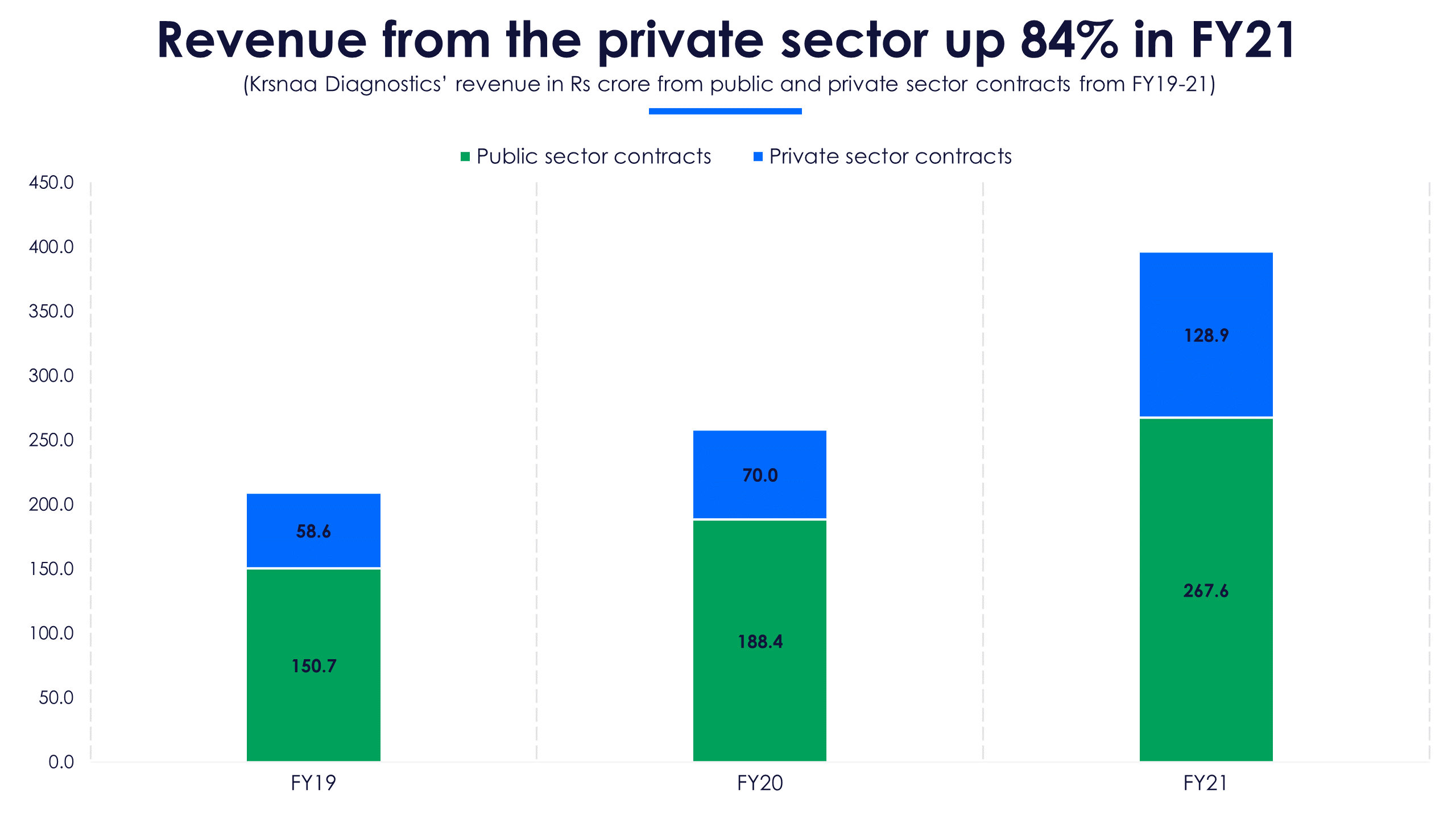 The company turned a profit in FY21 after two consecutive years of losses because it recognized a Rs 252.2 crore gain on the issue of preference shares which comprised 38% of total income. In FY20 and FY19, the company recorded losses on the issue of preference shares of Rs 177 crore and Rs 95.5 crore respectively. These amounts were treated as expenses in the company’s profit and loss statement. 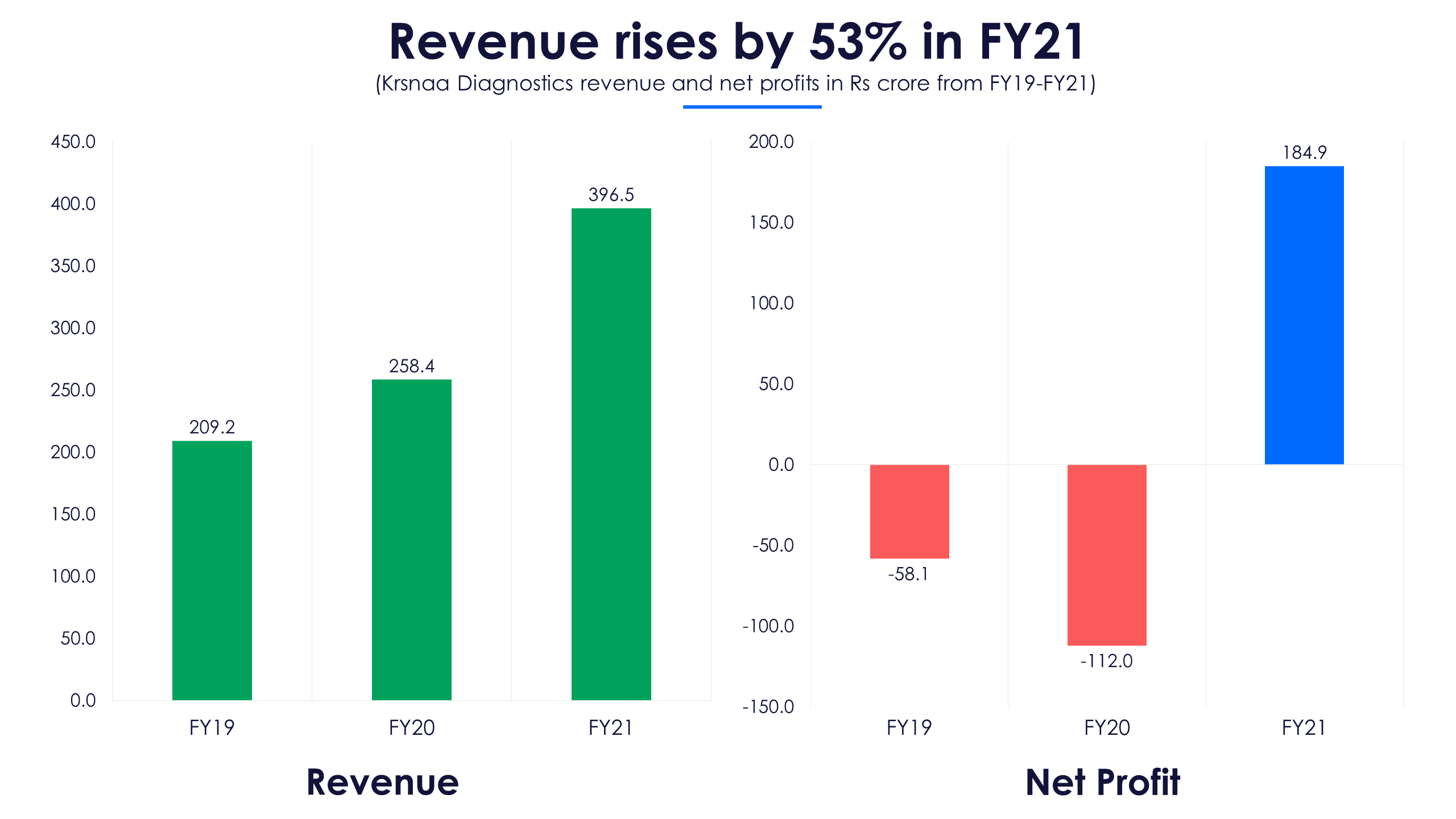 As Krsnaa Diagnostics recorded gain on the issue of preference shares of Rs 252 crore, its return-on-equity (ROE) in FY21 was 79.8%. Krsnaa Diagnostics’ ROE is erratic compared to its peers in the listed healthcare services space. 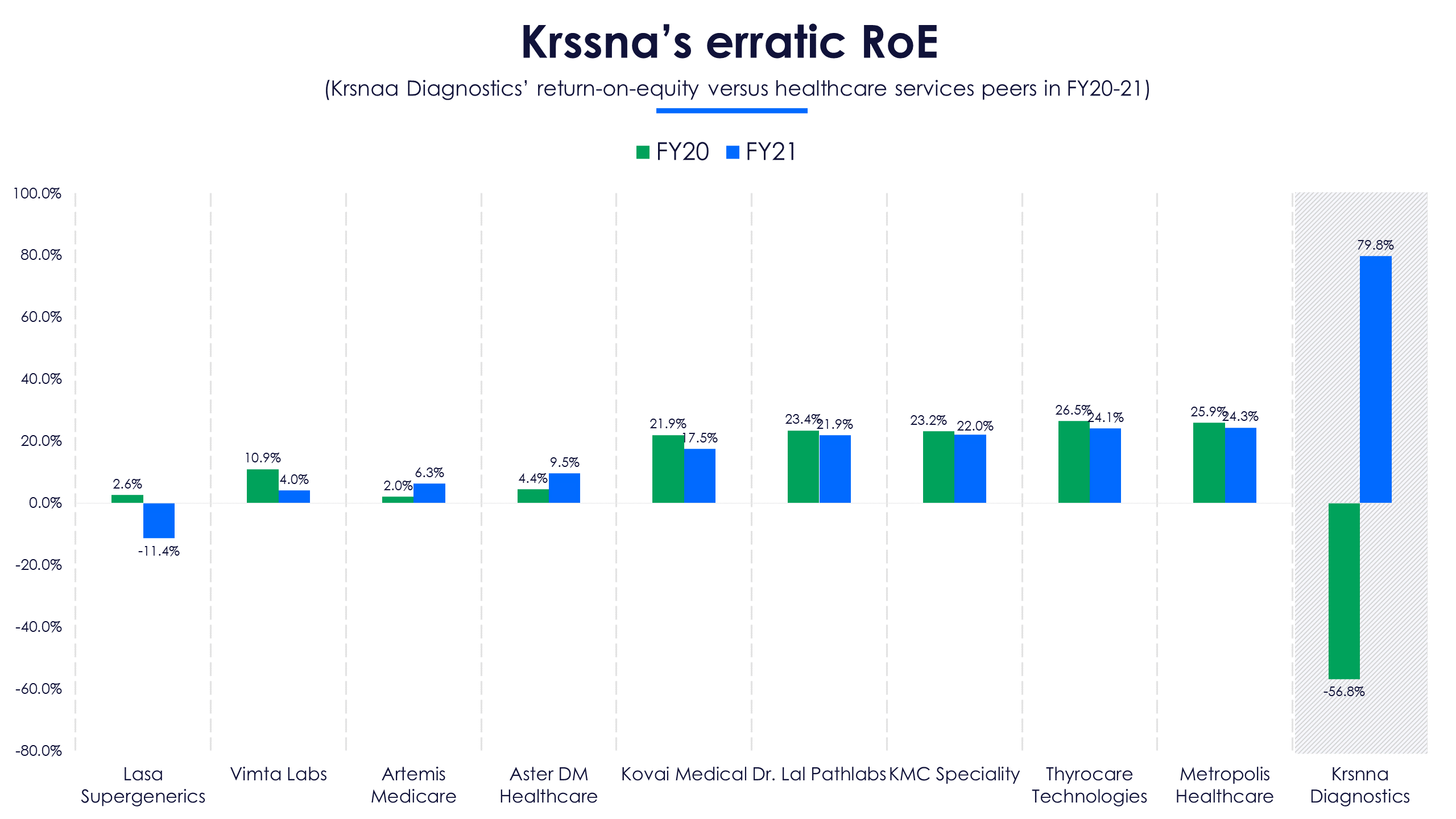 In FY21, Krsnaa Diagnostics’ total debt remained flat at Rs 232 crore. In the past two years, the company’s debt levels rose by 37% primarily due to the company’s expansion in Punjab. Its debt-to-equity ratio was 0.85 in FY21. The company’s interest expenses in FY21 rose by 5.7% to Rs 24.6 crore as the company increased long term debt by 40% to set up Covid-19 testing centers.

In FY20 and FY19, the company had a negative net worth of Rs 197 crore and Rs 85 crore, respectively, as its total liabilities exceeded its total assets. 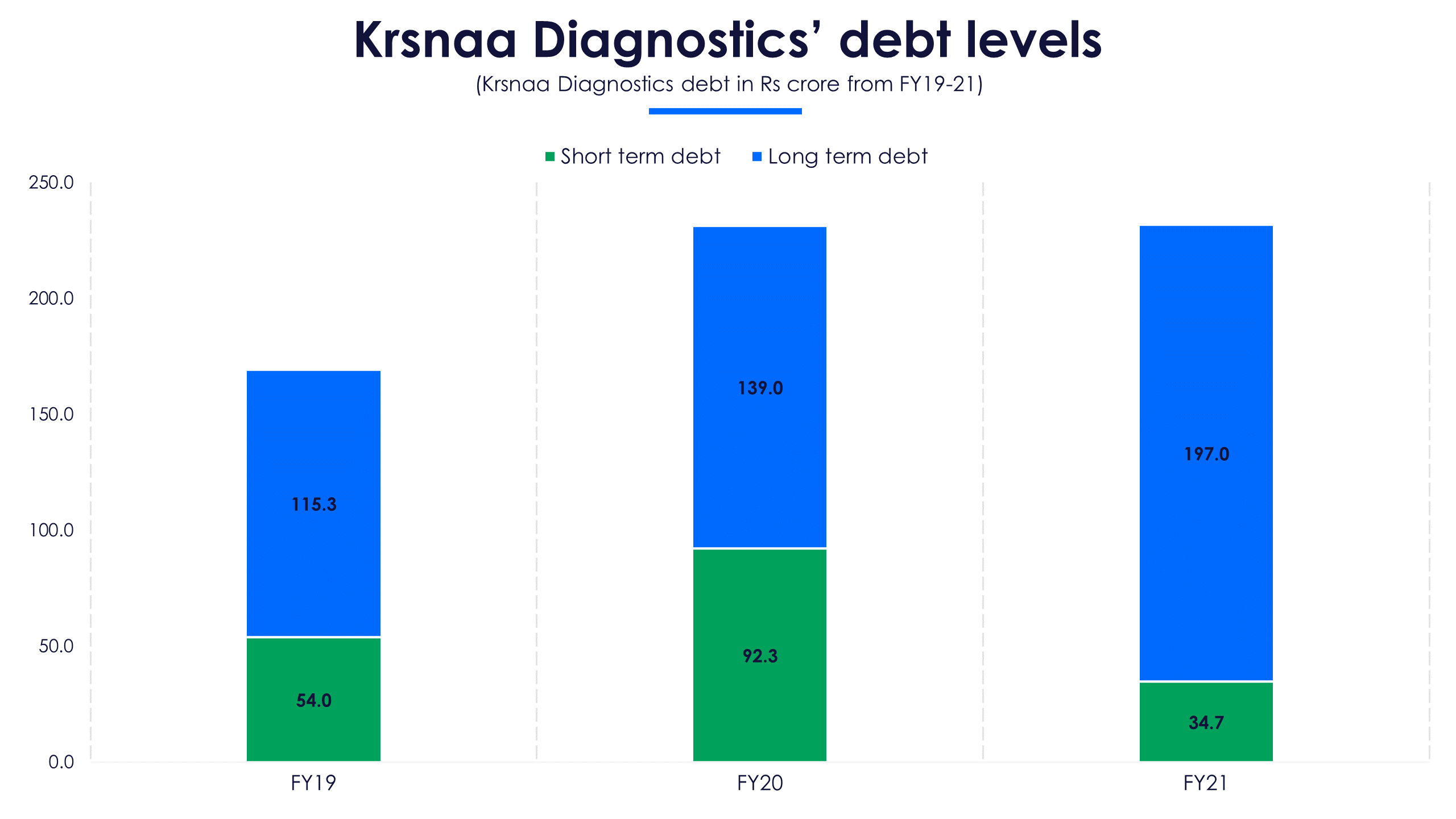 In FY21, Krsnaa Diagnostics’s operating cash flows were Rs 102 crore, a 2.7X growth YoY. Capex during the year doubled to Rs 103 crore because it set up Covid-19 testing centers. The company’s free cash flows in FY21 were Rs 35.7 crore. 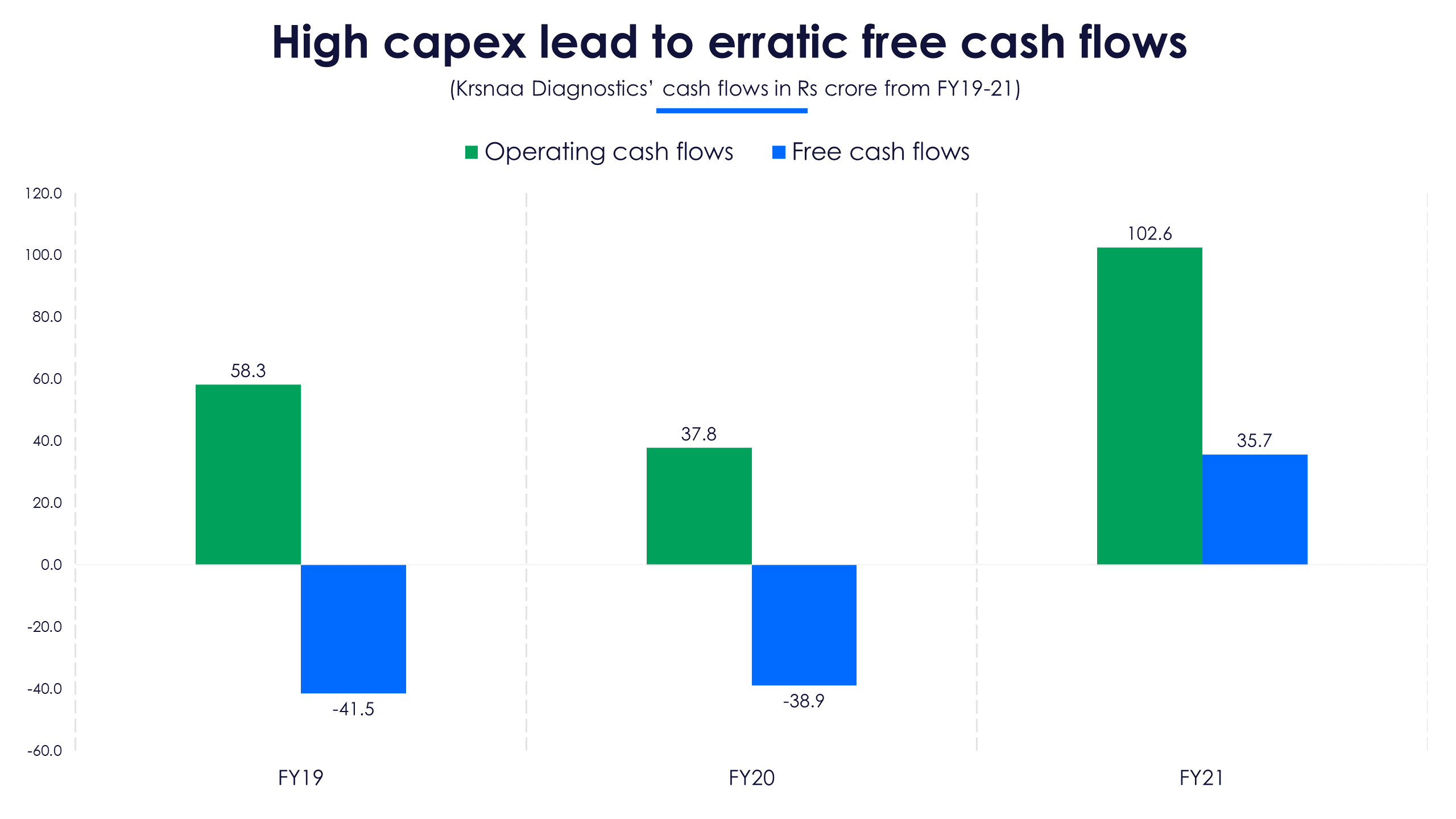 In FY21, the Indian diagnostic services market was worth Rs 73,000 crore. Due to higher expenditure on healthcare infrastructure (particularly in rural areas), rising income levels, and government programs (like the Ayushman Bharat Pradhan Mantri Jan Arogya Yojana) the market is expected to grow at a CAGR of 15% to reach Rs 98,000 crore by FY23, according to a report by Crisil Ratings. Krsnaa Diagnostics with its unique PPP model is trying to get the most out of the government’s increased spends on healthcare infrastructure, especially in tier 2 and tier 3 cities.

Covid-19 boosted the prospects of PPP diagnostic chains in FY21. State governments of Karnataka and Maharashtra, which had high cases during the first wave, established Covid-19 and RT-PCR testing centers under the PPP model. Prior to Covid-19, states like Uttrakhand, Punjab, Uttar Pradesh, and Jharkhand set up diagnostic facilities with private companies under the PPP model. Using the IPO proceeds, Krsnaa Diagnostics aims to tie up with more state government agencies to set up diagnostic centers under this model.

Investors will have to look at Krsnaa Diagnostics in a different light than its listed healthcare services peers. The company is present in 14 states, primarily in tier 2 and tier cities under a PPP model, while other diagnostic companies are present mainly in metro and tier 1 cities under a private model. Krsnaa Diagnostics’ revenues are split between radiology (41%) and pathology (59%), while peers’ revenue primarily (close to 80%) comes from pathology services.

The main risk with Krsnaa Diagnostics is its reliance on government tenders as nearly 70% of revenues come from the PPP business. That said, the higher than industry peers’ valuations, and institutional investors reducing their stake via the IPO also raise minor red flags. Investors will have to weigh its possible growth prospects with these drawbacks before making an investment decision.