Deepak Nitrite: Will phenolics continue to drive its phenomenal growth?

The Covid-19 pandemic turned up an opportunity for Deepak Nitrite. As the demand for non-Chinese pharmaceuticals and chemicals grew and industrial and retail packaging became a priority, Deepak Nitrite quickly altered its production line. From a pure commodity chemicals company, it prioritized phenolics products used primarily in FMCG and industrial packaging. This is now the company’s main segment and the reason for its massive growth.

At the start of 2021, Deepak Nitrite’s growth momentum was cooling off. The foreign demand for chemicals which was moving away from China, was plugged by domestic and international companies and capacity utilization at its phenolics plant reached 100%.

In Q4, not only did the phenolics division continue to generate higher revenues than the previous quarter (25% growth), but its margins improved. This was helped by returning demand for base chemicals like sodium nitrite and nitro toluene from the automobile sector. These sectors were recovering before the second wave of Covid-19 disrupted automobile production. With some demand drivers absent, is Deepak Nitrite’s growth story finished, or can it pick up where it left off?

In Q1FY21, Deepak Nitirite’s revenues dropped by 36% QoQ to Rs 681 crore, the lowest since Q2FY19. This was because the demand for its then main vertical base chemicals was declining. Base chemicals are used by the auto-components industry in the manufacturing of tyres and other rubber products.

During Q1 and Q2, the company’s wholly-owned phenolics subsidiary, Deepak Phenolics saw sustained demand for phenol and acetone from the FMCG and packaging industries. This allowed the company to post strong top and bottom-line growth in these quarters. Heading into Q4, the momentum continued as demand for base chemicals, fine and specialty chemicals, and performance products recovered. 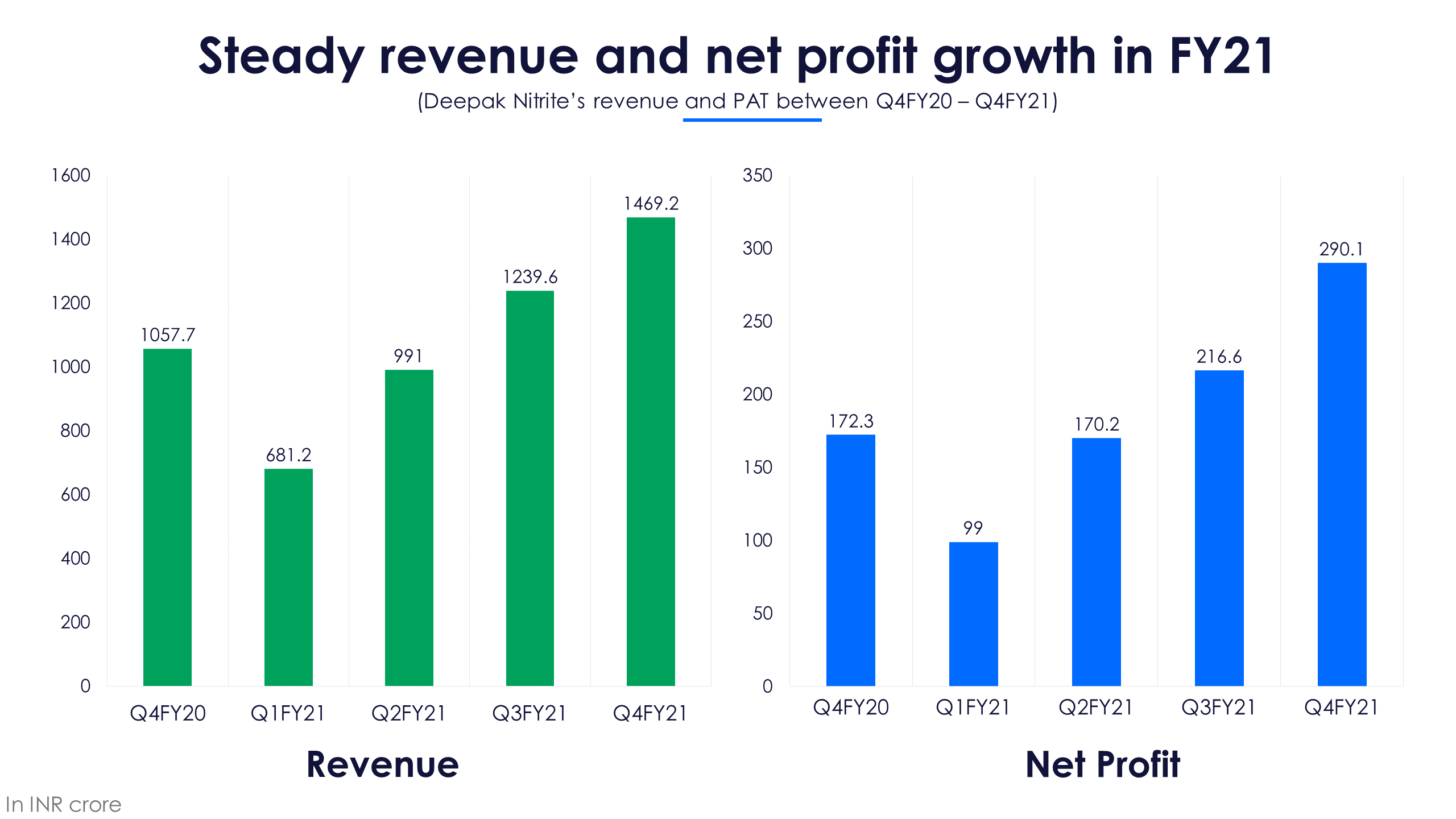 In Q4, even as operating expenses grew by 12% QoQ to Rs 1,008 crore, operating profits were higher by 36% QoQ as base chemicals demand from tyre manufacturers increased. Earnings before interest and tax (EBIT) was Rs 460 crore, a rise of 35.5% QoQ. EBIT margins were 31.4%, in Q4, a growth of 390 basis points over the previous quarter. This was because of the company’s increased plant productivity and operational leverage indicated the management. Both EBIT and profit margins have been consistently increasing in FY21. 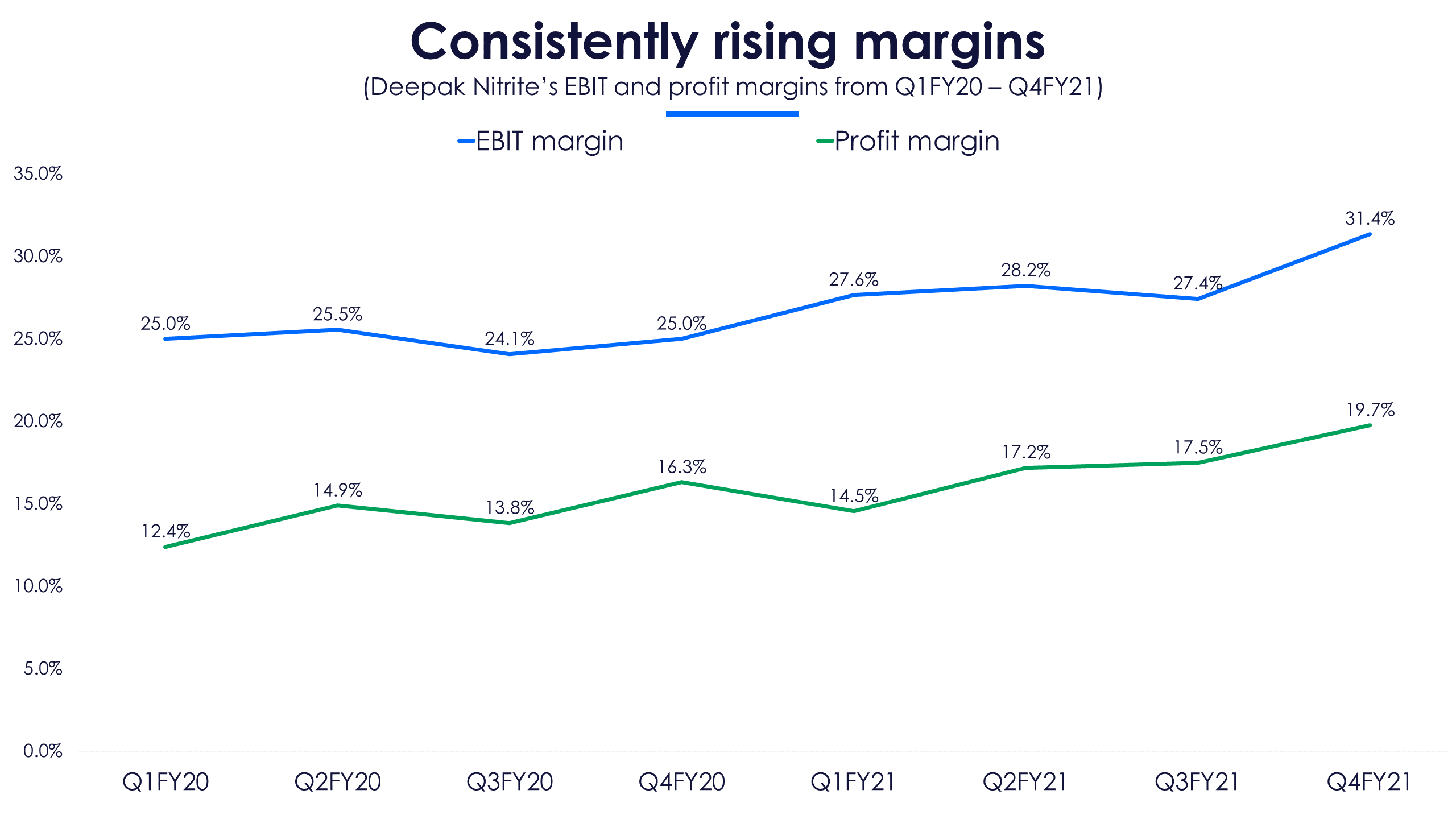 In 2018, India imported nearly 80% of phenol and acetone from China and other Southeast Asian countries. Between 2017-2019 China closed many chemical plants due to rising pollution. This gave a boost to domestic chemical companies like Deepak Nitrite.

In FY21, its phenolics division was performing well. As the country went into lockdown, the demand for packaging products (FMCG and industrial packaging) increased. Deepak Nitrite is the largest producer of phenol and acetone in the country. This was when its base and specialty chemicals and performance products demand was muted. Due to this, the phenolics division’s revenue share rose in each quarter of FY21. 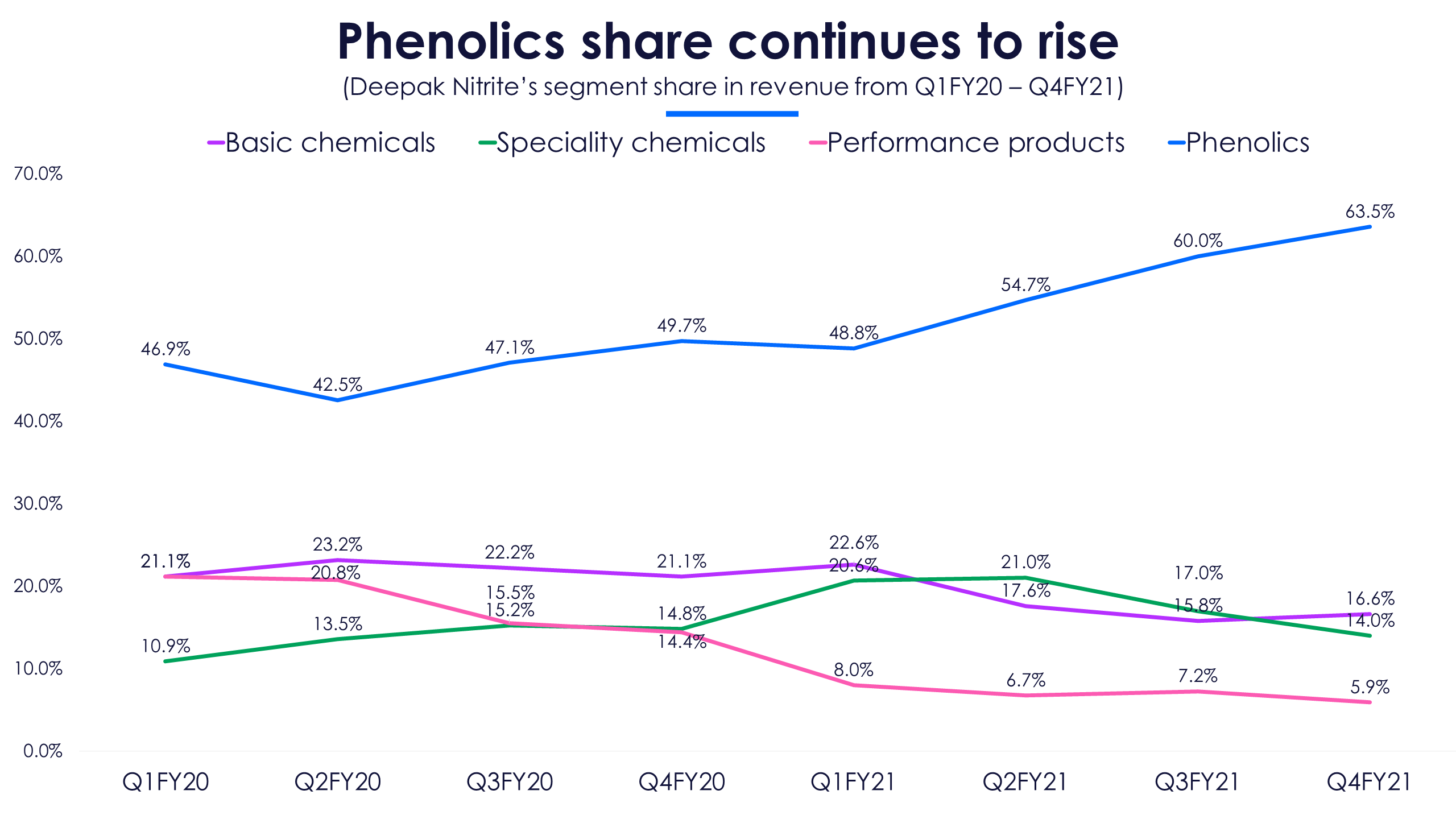 In addition to these demand drivers, Deepak Phenolics’ gross margins are improving. In Q4, gross margins were 40.5%, against margins of 27.4% in the year-ago period. However, the margins have dropped by 400 basis points from Q3. This was because the phenolics plant was operating at 115% capacity in Q3. Due to rising Covid-19 cases at the end of Q4, phenolics production lagged, and gross margins declined. However, during the Q4 earnings call, Maulik Mehta, the CEO of Deepak Nitrite said all plants are operating at “elevated productivity levels,” expecting 100% plus capacity utilisation to sustain. 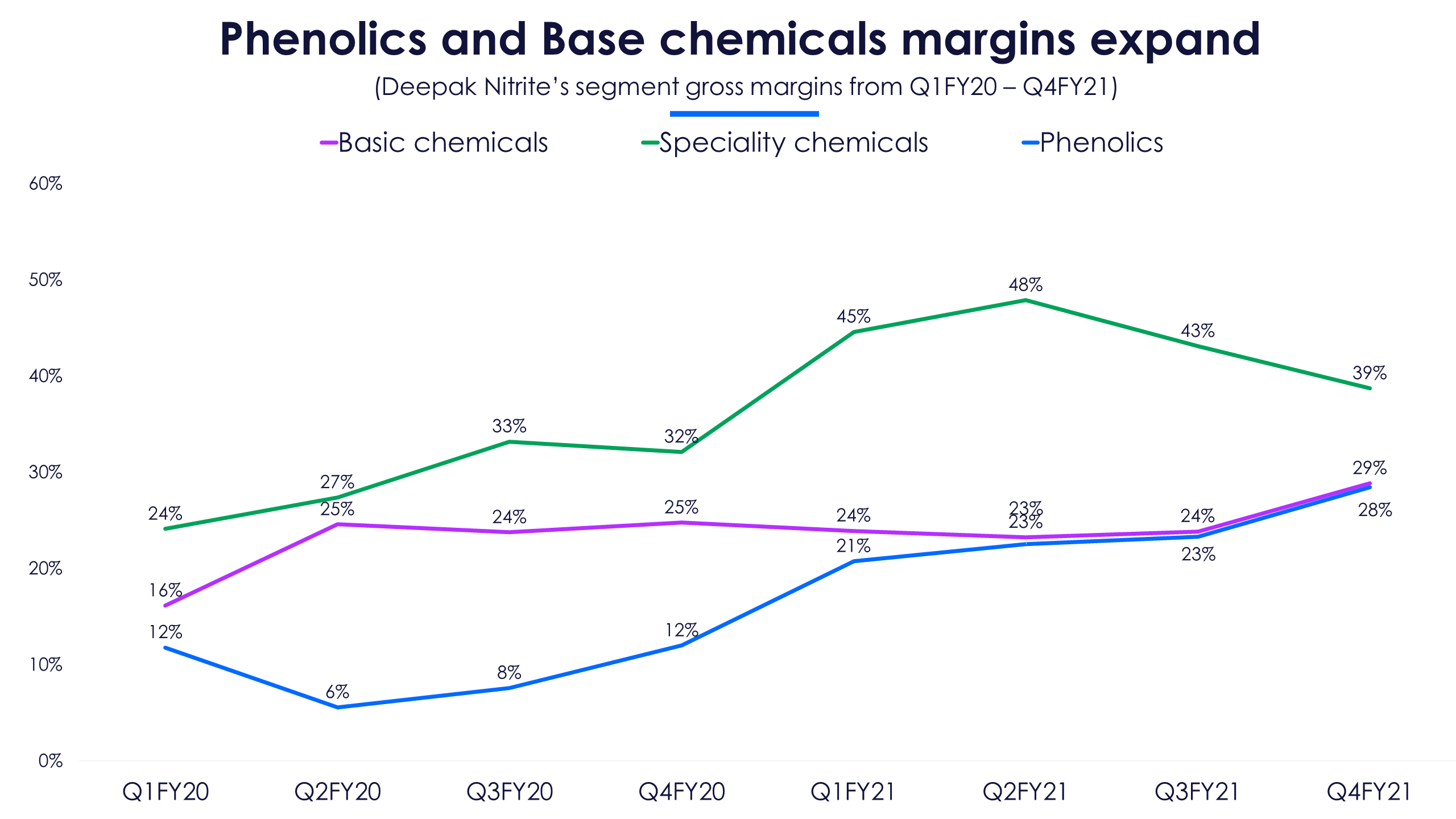 At the start of FY21, Deepak Nitrite had a debt of Rs 1,200 crore (85% from the phenolics division). The company utilised cash flow from operations for capital expenditure (capex) since it did not want to pile additional debt.

In Q1FY21, Deepak Nitrite set up a plant to manufacture isopropyl alcohol (IPA), a chemical intermediate required to produce sanitizers. This was done to meet the increased demand from FMCG companies who were prioritizing their hygiene verticals. In order to set up the plant, the company incurred a capex of Rs 200 crore. At the end of FY20, the company had Rs 245 crore in free cash which was used to finance the IPA plant.

In the Q3 earnings call, Maulik Mehta said that the company will undertake a brownfield expansion of the IPA plant in April 2021 to increase capacity. This is in addition to the Rs 700 crore capex guidance for FY22. Deepak Nitrite on a standalone basis will use Rs 400 crore to expand its base chemicals plant in Nandesari while Deepak Phenolics will use Rs 200-300 crore to increase phenol production.

In the Q4 earnings, Mehta said that the capex and expansions will remain despite the second wave as he expects “continued strong demand from our market end segments.” 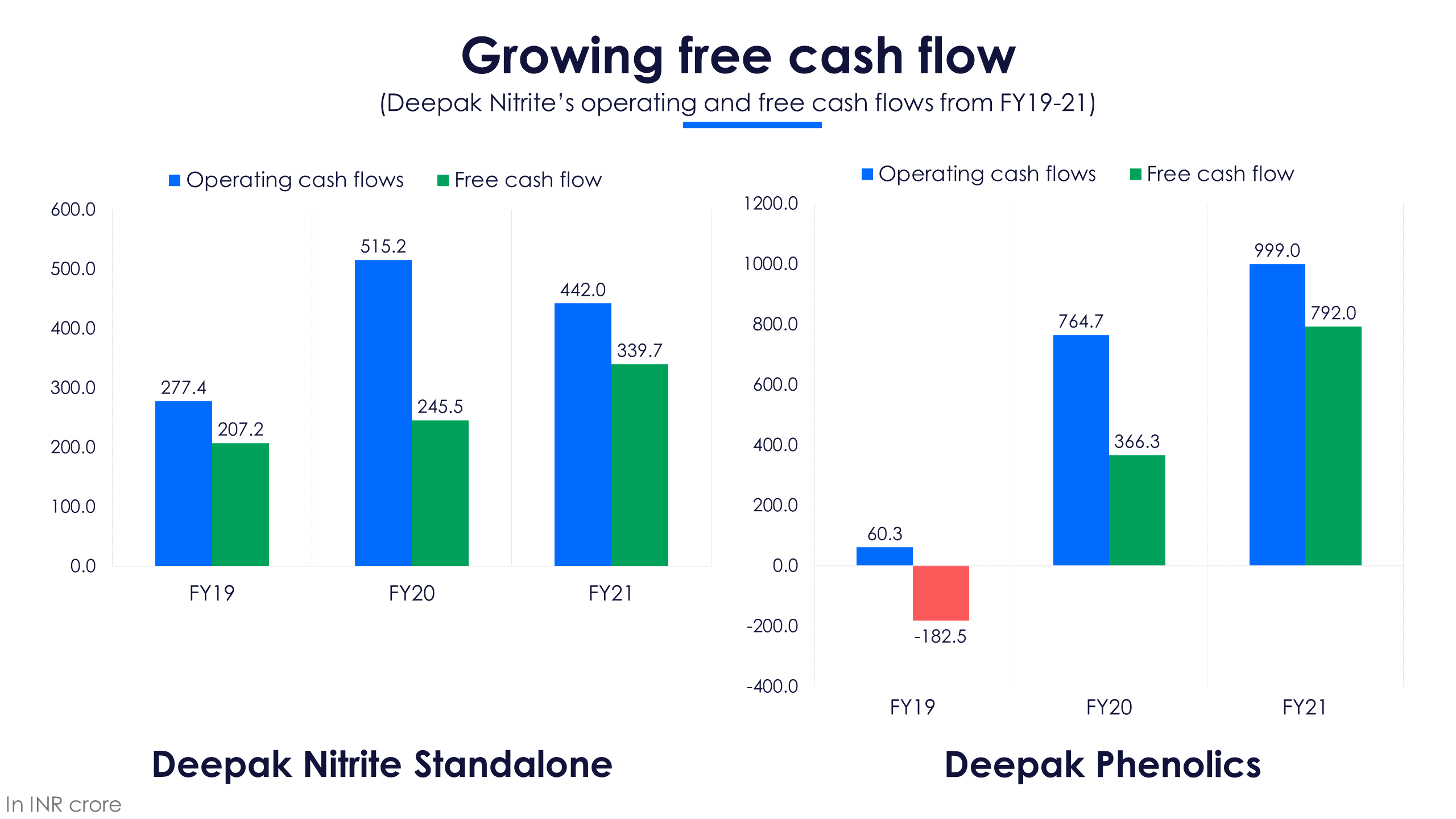 Entering FY21, the company had high debt worth Rs 2,600 crore taken up between 2014-2016 to set up Deepak Phenolics. The debt burden grew as more borrowed capital was pumped into the phenolics division. Between FY16 to FY19, total debt increased by 163% to Rs 1,124 crore at the consolidated level. However, the company was steadily reducing its standalone debt, which fell by 32% in the same period.

As the phenolics plant started generating steady and increasing revenue from FY19, Deepak Nitrite reduced debt. At the end of FY21, consolidated debt was Rs 527 crore, a decline of 56% against the previous year. 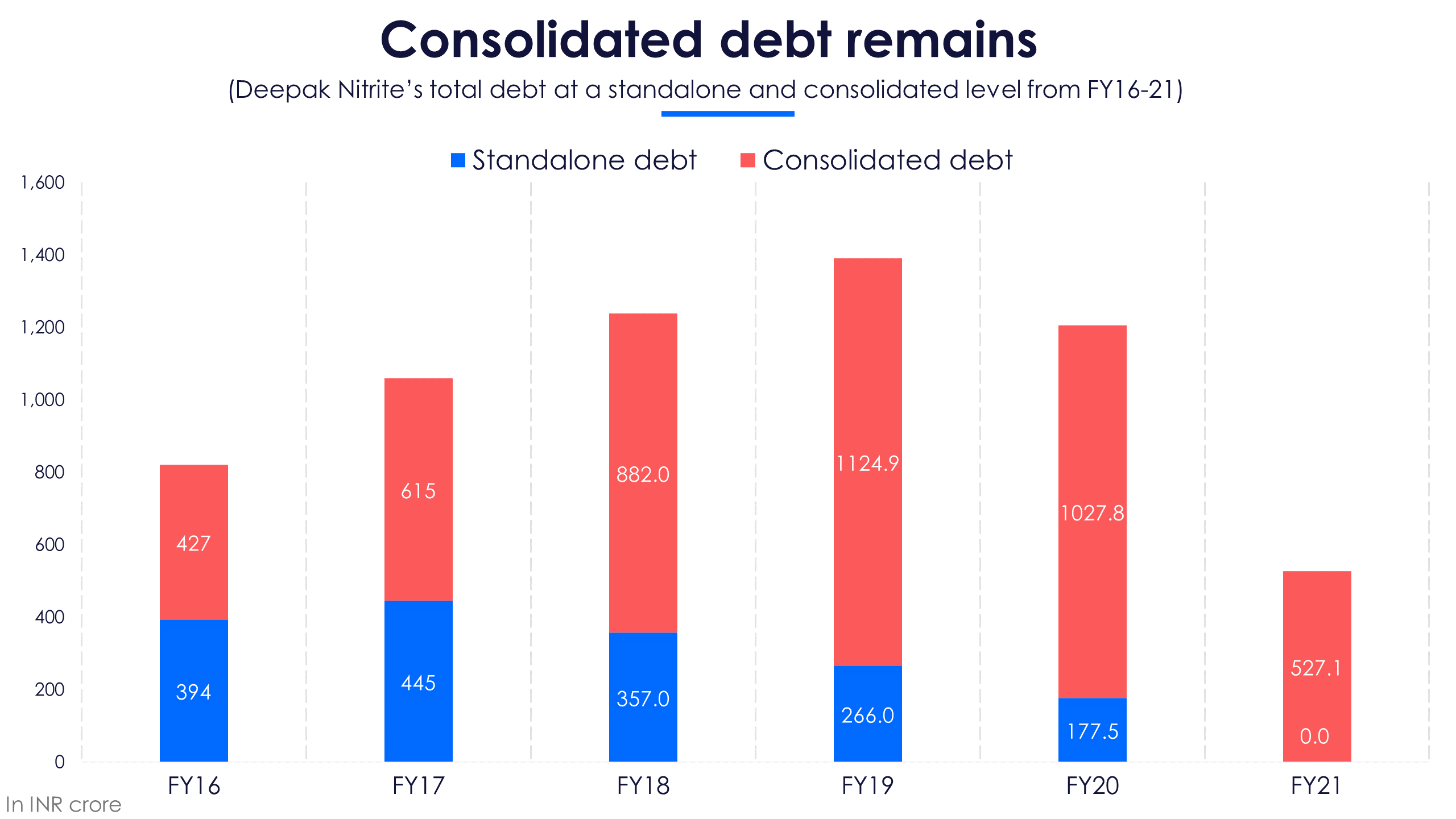 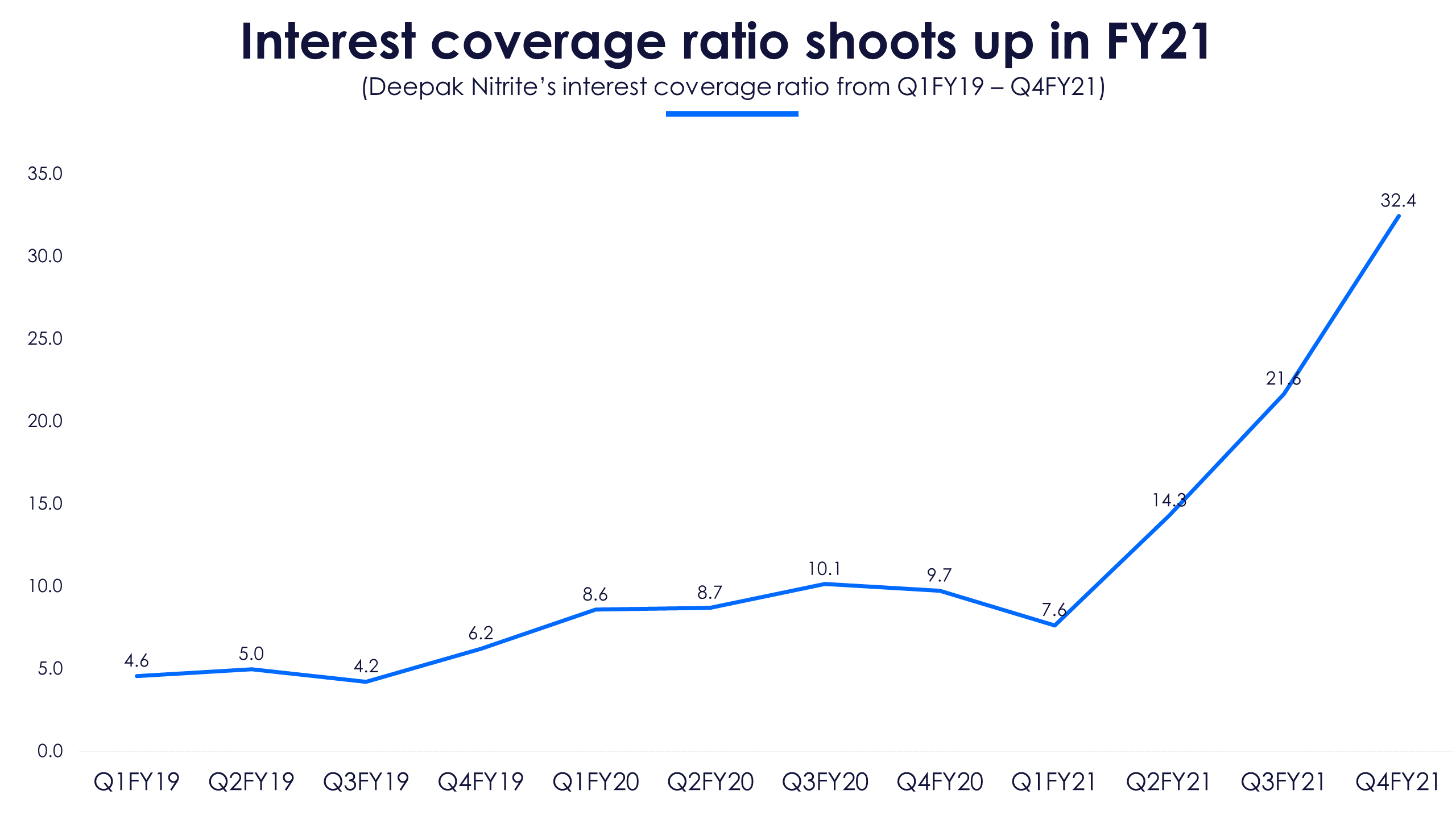 Phenolics the driver, while base and specialty chemicals still dormant

Deepak Nitrite had a dream run in FY21. This was because of rising demand for phenolics products, and the company’s fortuitous position to be the leading manufacturer. However, in order to become the leading domestic manufacturer, the company took on high debt. In FY21, it managed to pay off nearly 50% of outstanding consolidated debt. On a standalone basis, it is debt-free.

Deepak Phenolics now accounts for nearly two-thirds of consolidated revenues. Its margins are expanding, but operational capacity is now capped. With the second wave of Covid-19 hitting the country, phenol will still be in demand from the industrial packaging and FMCG industries. The key for Deepak Nitrite will be increasing phenolics production to cater to this demand. For this, it has lined up a sizeable capex (Rs 400 crore) funded through free cash flows.

Beyond the phenolics division, the base and specialty chemicals division (35% of FY21 revenue) are dormant, as demand for these products is still muted. If the second wave subsides soon, these divisions can also add to revenue growth.

Deepak Nitrite’s share price rose by 300% in FY21. This was because of an unexpected demand boost turning its balance sheet into a sea of green. These drivers are still in play, and the company is looking for continued gains from this. What’s different is that it now operates with lower leverage, higher cash flows, and a phenolics approach.