Adani Ports: Has its end-to-end logistics play paid off?

The bleak economic situation and its poor quarterly results didn’t stop Adani Ports’ expansion. The port operator began taking on debt and went on an acquisition spree, buying its way into dominance. Between August 2020 to April 2021, it acquired two of the largest commercial ports in the country (Gangavaram Port and Krishnapatnam Port). This increased Adani Ports’ market share in cargo movement across all ports in the country to 25% in March 2021, from 18% a year earlier.

After restricted movement in Q1 pulled down the firm’s revenues by 21% QoQ, Adani Ports bounced back in Q2 as commercial activity resumed. This momentum continued in Q3 pushing up revenues and net profits. In Q4, the momentum stopped as both revenues and net profits declined. But the rally in Adani Ports stock has continued - in Q4FY21, the stock jumped 53%. With revenues declining in Q4, we look at whether the market euphoria is justified.

Q4 revenue and net profits rise on a low base 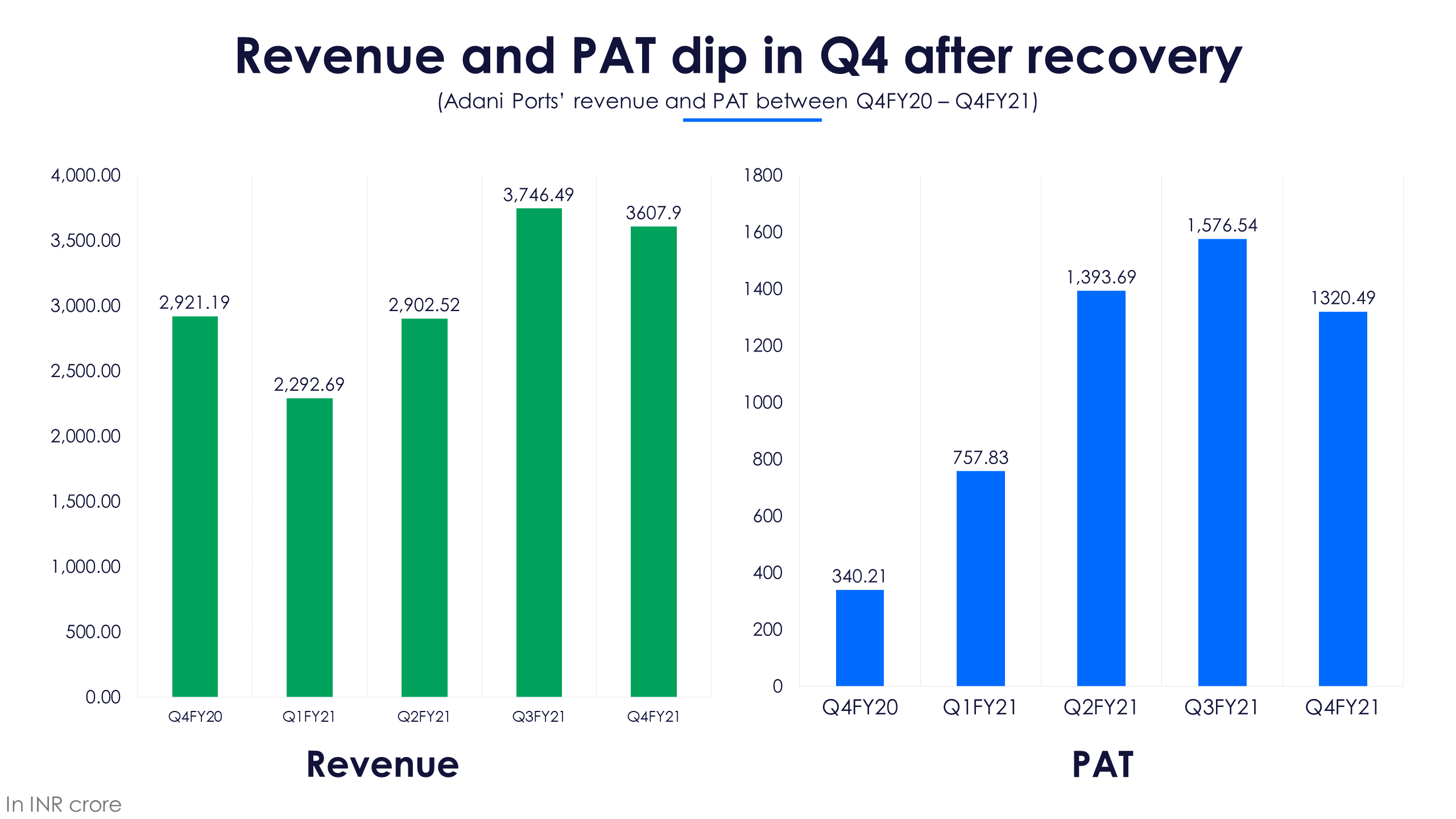 Due to its acquisition spree, Adani Ports’ earnings before interest and tax (EBIT) margins have been declining since Q2. EBIT includes professional and legal fees for the acquisition. In Q4, EBIT came in at Rs 2,172 crore, a decline of 17% QoQ, with margins of 60%. The ports business posted a higher EBIT margin of 70%. 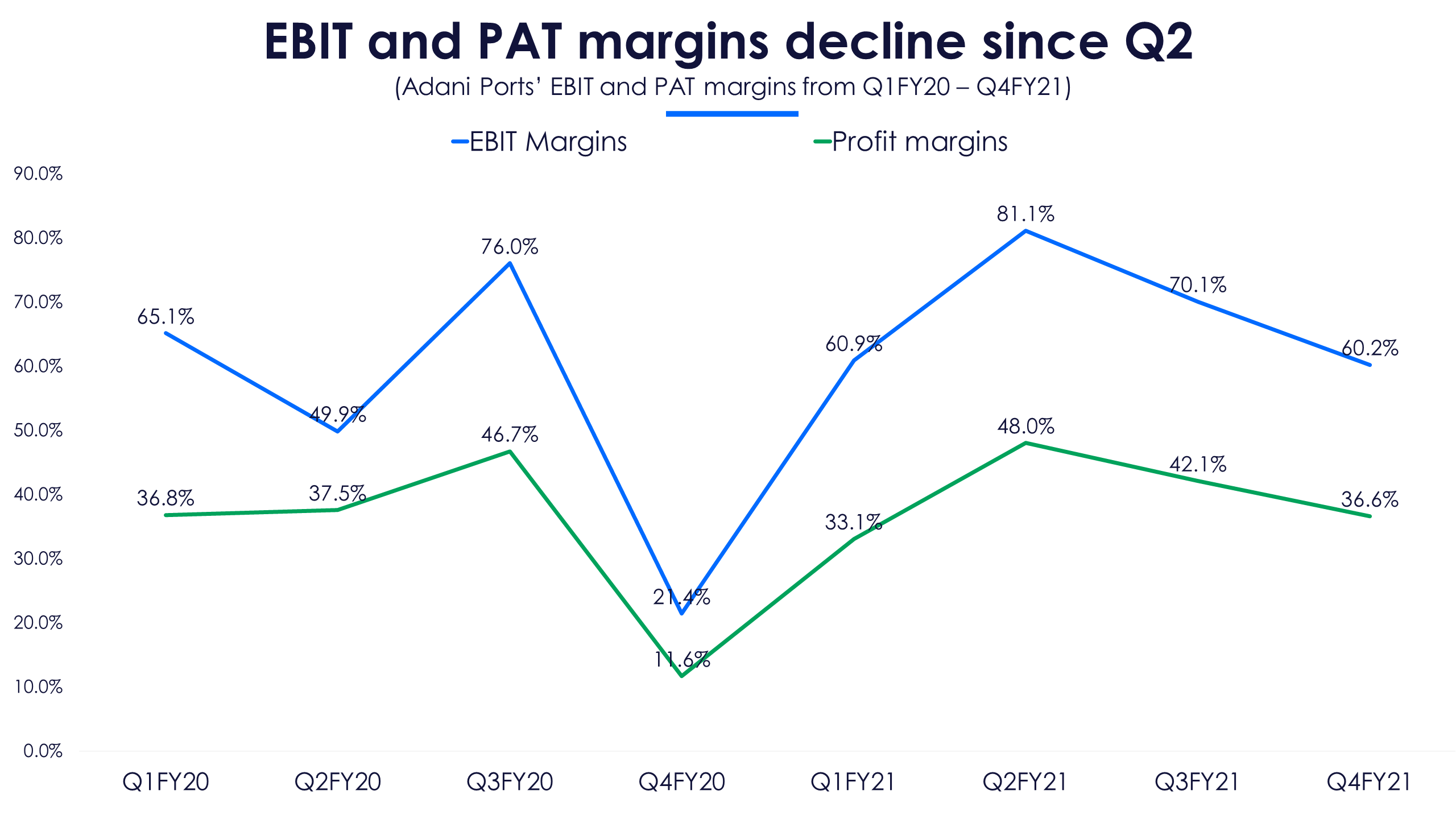 In FY21, Adani Ports made three big acquisitions for a combined price of Rs 15,000 crore. In October 2020, it acquired a 75% stake in Krishnapatnam Port (KPCL) in Andhra Pradesh for an enterprise value of Rs 12,000 crore. In February 2021, it acquired Dighi Port (DPL) in Maharashtra for 705 crore. In March, it acquired an 89.6% stake in Gangavaram Port (GPL) from private equity firm Warburg Pincus and GPL’s promoter, the DVS Raju family, for a total of Rs 5,558 crore.

This slew of acquisitions within a span of six months pushed up its operating expenses. Deepak Maheshwari, Adani Ports’ former Chief Financial Officer (who resigned on May 4 citing personal reasons) said operating expenses were higher in Q3 due to “legal and professional expenses” related to the KPCL acquisition in October 2020. These expenses amounted to $3 million (Rs 22 crore) in Q3.

In Q4, expenses related to the two acquisitions (DPL and GPL), pushed the operating expenses up by 8% QoQ to Rs 985 crore. Consequently, the bottom line and margins sharply dropped in Q4. 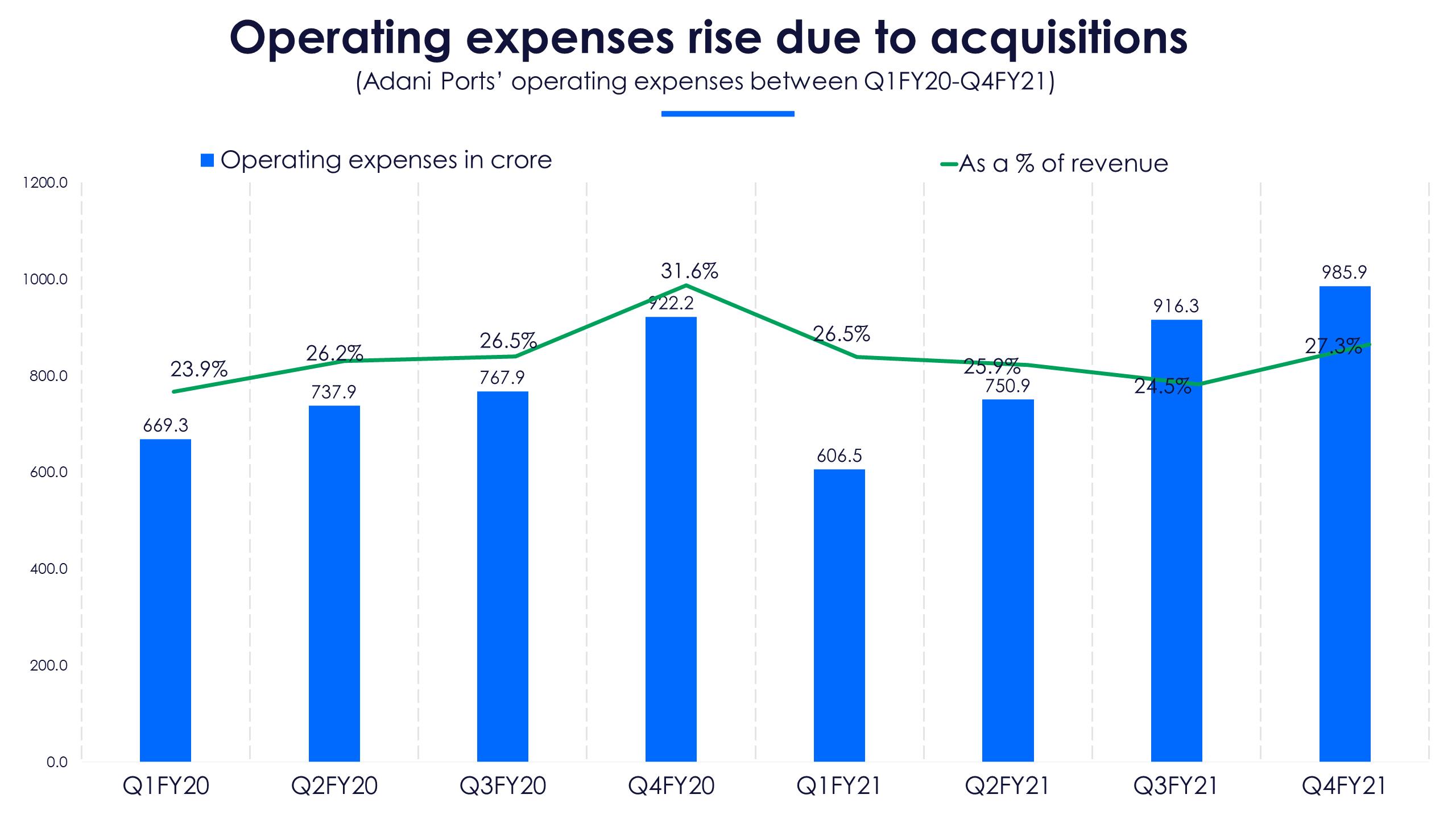 An ongoing concern for Adani Ports is the soaring debt levels leading to consistently higher finance costs. In Q4, finance costs were Rs 643 crore, a rise of 12% against the previous quarter.

At the end of FY21, Adani Ports’ gross debt was Rs 32,900 crore, a 25% jump YoY. The Rs 6,754-crore additional debt of the company accumulated in the financial year was piled on in the first half. Between April-September 2020, the company raised nearly Rs 5,000 crore through non-convertible debentures (NCDs) issued in four tranches. 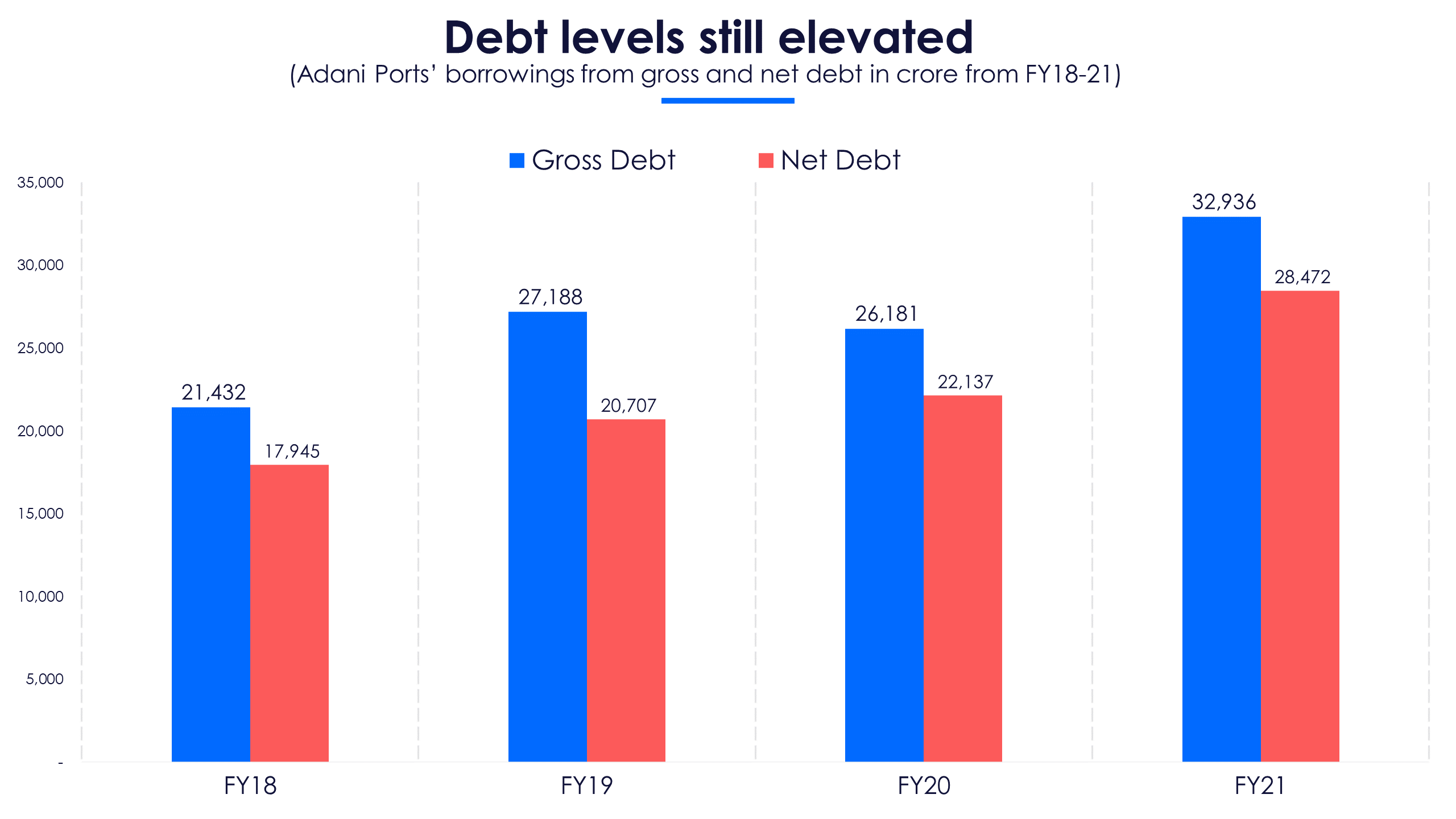 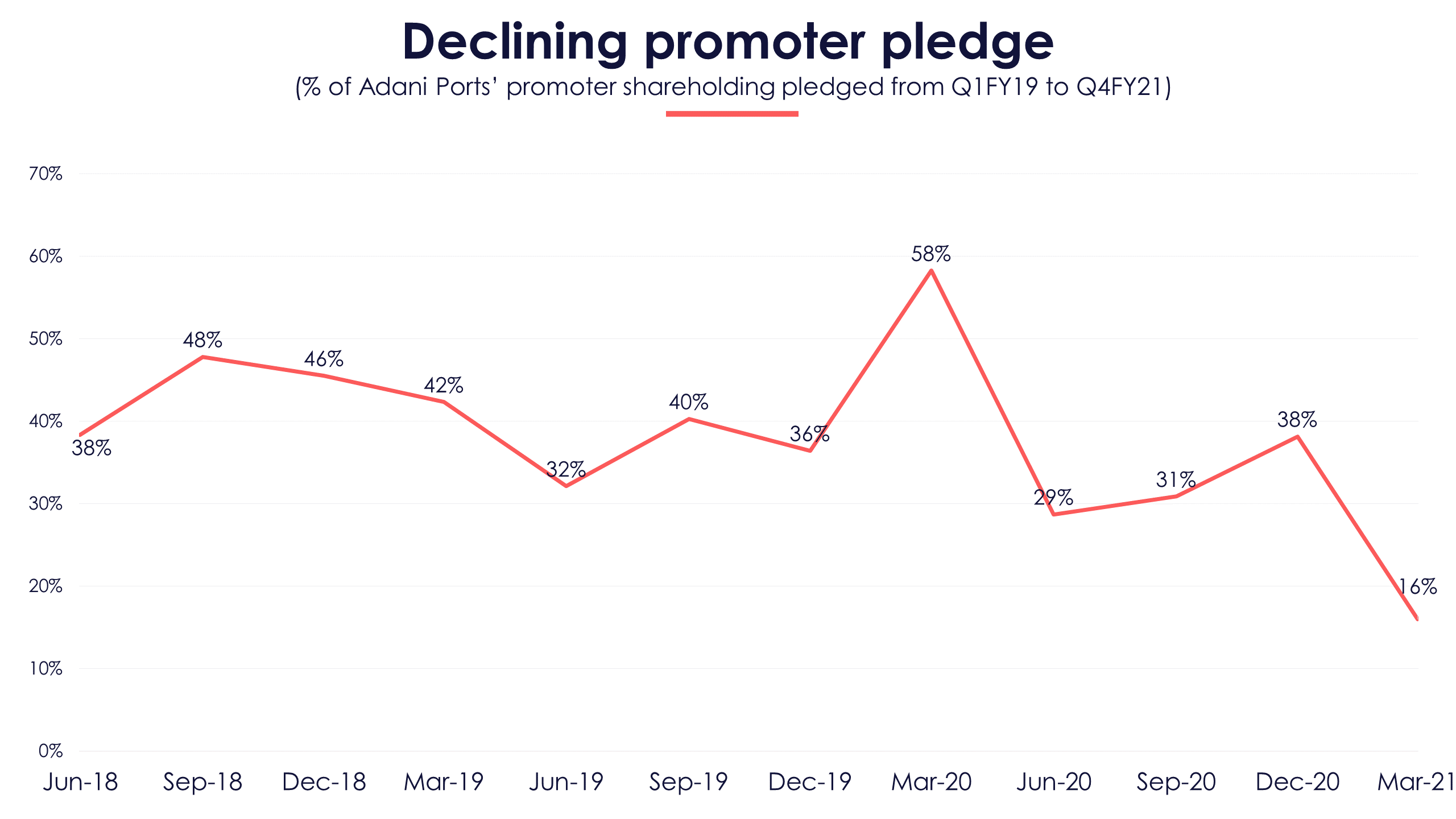 Brokerages have consistently cited high promoter pledge levels as a red flag for the company, especially when looked at in light of its rising borrowings. That said, the decreasing promoter pledge has assuaged a few brokers’ concerns. 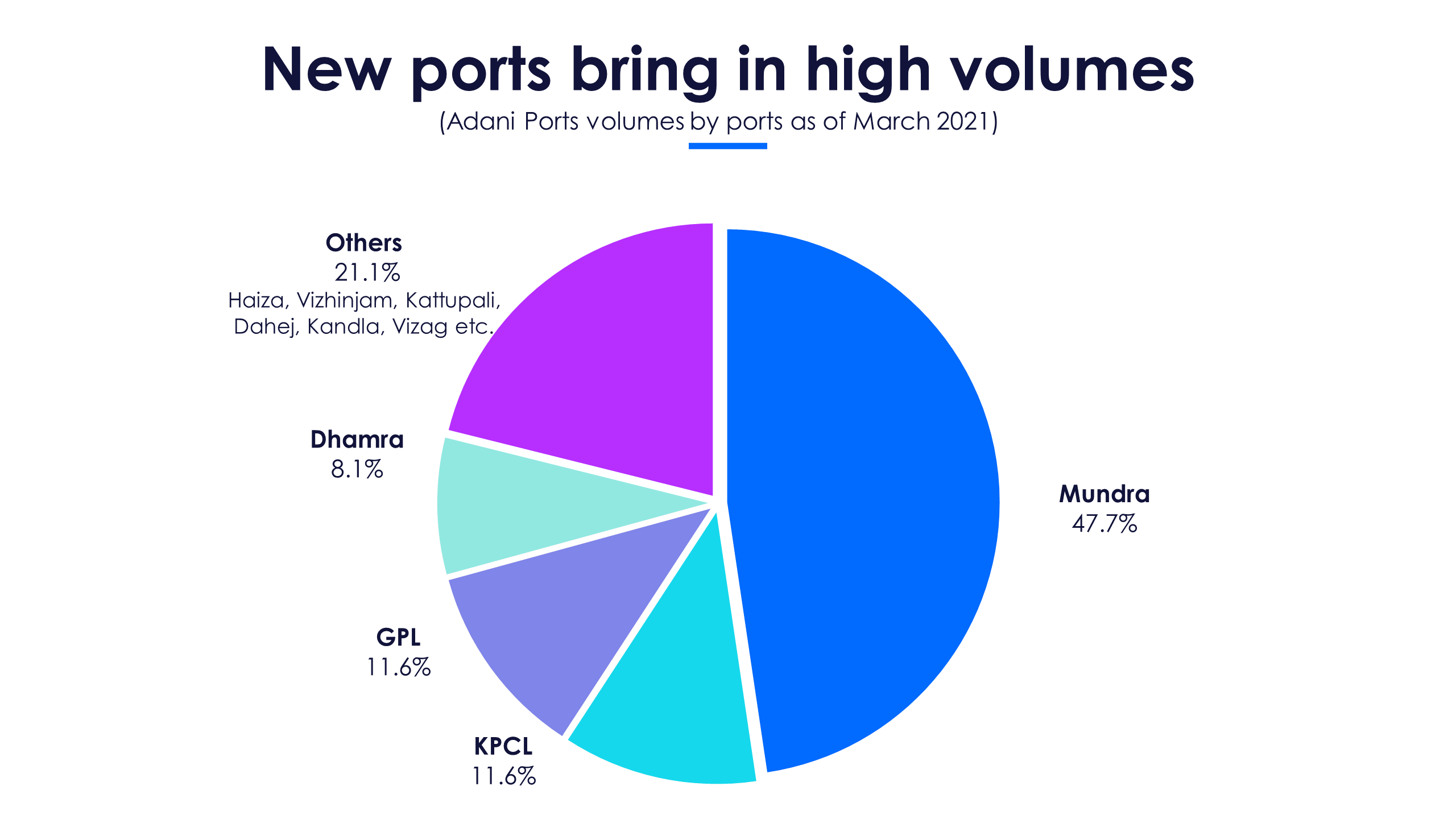 The acquisitions have allowed Adani Ports to increase its market share in the overall cargo transported in India’s ports to 25% in Q4 from 18% at the start of FY21. The management expects to increase this share to 32% by FY25.

Out of the annual capital expenditure of Rs 2,000 crore allocated for FY21, Adani Logistics used Rs 500 crore to expand its logistics network. This capex was used to set up warehousing facilities in its Mundra and Nagpur logistics parks.

Heading into FY22, the outlook for Adani Ports is weak. The management expects cargo volumes of 310-320 mmt. This is a 24% increase against FY21. Considering that H1FY21 was a washout for the transportation sector, analysts aren’t excited about the guidance.

Adani Ports’ total cargo volume from its 12 operational ports is 554 mmt. The guidance represents 57% utilization. This will be reduced as the management said it could abandon its Yangon Port in Myanmar due to ongoing military tensions. The Yangon Port represents 1-2% of its asset book.

The KPCL and GPL acquisitions have clearly boosted Adani Ports’ presence, especially on the country’s east coast. S&P Global Ratings said the company’s growth via acquisitions financed through debt will deteriorate its credit profile. The rating agency has given the ports’ operator a BBB negative rating for its long-term foreign currency loans. The promoter’s pledged shares still remain a worry for brokerages and gives the business less breathing room.

Investors holding Adani Ports’ stock for a while have already seen returns. The stock rose by nearly 200% in FY21. This is because of the company’s ambitions to build a complete logistics gamut from sea to rail to road and even warehousing. However, given the tepid outlook of the economy in the coming quarters and its leveraged position, similar growth in FY22 looks priced in.