Bright sparks in the Covid19 economy

The financial year is finally coming to an end. This FY has been 12 months of us living with the unwanted guest that is Covid19 - we are exactly one year into the pandemic, amid concerns about a second wave. The agricultural sector has been a rare bright spark in the otherwise muted economy, and many businesses in this ecosystem are doing pretty well.

This week in Analyticks, we look at

Agrochemicals: The grass is greener

With an uptick in agricultural activity and a likely bumper rabi harvest, many businesses linked to this sector have come into focus. One such theme is the agrochemicals space. According to Care Ratings, there has been a 12% rise in production of agrochemicals in the nine months ended December 2020 to 163,000 tonnes. Exports during the same period rose 16.1% to 384,000 tonnes during the same period.

The growth in production and sales of agrochemicals is despite the impact of the pandemic in the domestic market. Good monsoons in India have also resulted in a higher kharif sowing season. Exports were supported by benign weather patterns in Brazil, US, part of EU, among other regions. 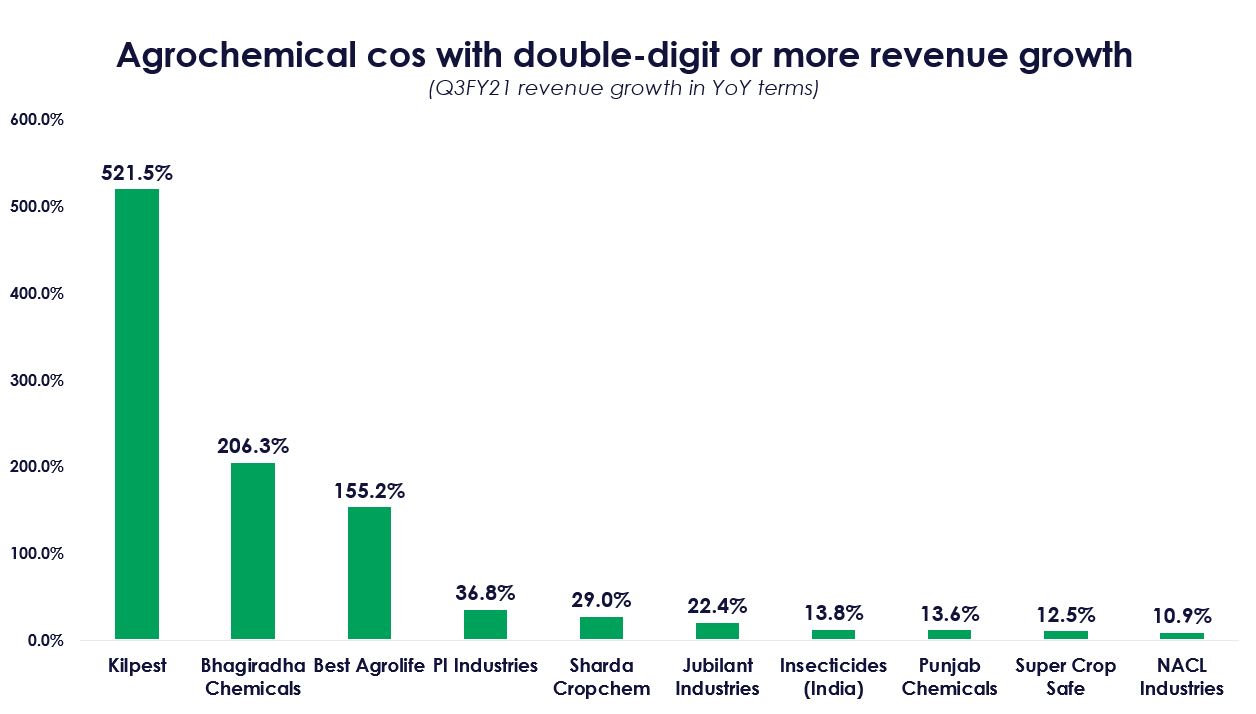 Net profits of 12 out of the 22 listed agrochemicals companies rose by more than 40% on a YoY basis in the quarter ended December 2020. 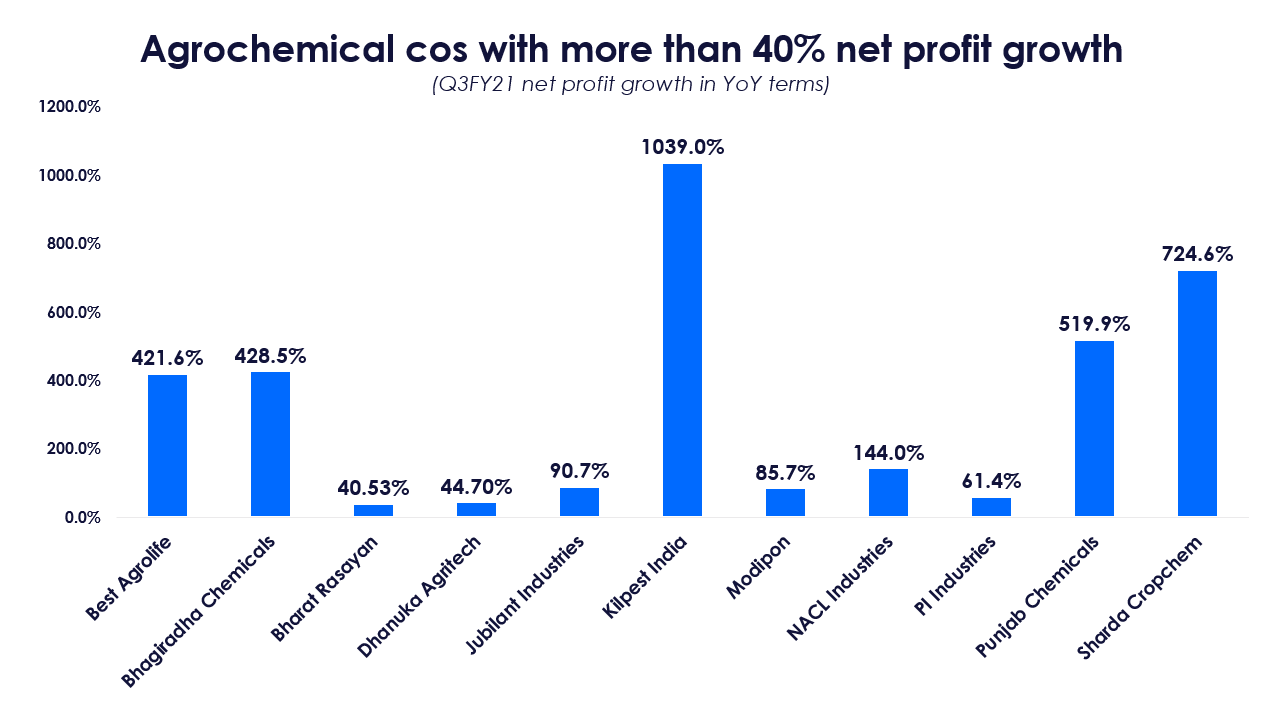 Although there was an uptick in revenues of listed agrochemicals players, October and November saw some hiccups due to prolonged rainfall, and two cyclones in Southern India. This led to lower consumption of agrochemicals in South India, according to CARE Ratings.

But December saved the day, and the ratings agency expects demand in Q4 FY21 to remain sanguine. The increase in the credit allocation to the agricultural sector to Rs 16.5 lakh crore from Rs 15 lakh crore, bodes well for the agricultural sector as a whole. The benefits of a higher credit allocation will also trickle down to agrochemicals players over the next sowing seasons.

After a tumultuous 12 months since its listing, SBI Cards and Payments Services (or SBI Cards) is currently trading at 16.8 times its book value. When the company’s IPO opened a little over a year ago under the cloud of the pandemic, it was valued at over 40 times its then annualized FY20 earnings.

The stock is currently trading at a trailing twelve-month earnings (TTM PE) multiple of nearly 111, while its parent State Bank of India trails at a TTM PE of 14 times. Even the trailblazing Bajaj Finance trades at a TTM PE of around 81. What makes SBI Cards the apple of many investors’ eyes?

Revenues dented by pandemic, but rebound after Q1FY21

In April 2020, SBI Cards stock price fell below Rs 500 as it became clear that credit card users will be offered a moratorium on their repayments that was allowed by the Reserve Bank of India.

The company’s non-performing assets that it reported in Q1, Q2 and Q3 or FY21 were 0.43%, 1.52% and 0.56%, respectively. If we add the accounts that were not declared NPA after August 31 due to a Supreme Court order (final order passed on March 23), then the NPA numbers rise to 1.35%, 4.29% and 1.61%. There is a tapering off of NPAs caused due to the economic impact of the pandemic leading to borrowers not paying on time. But it will be interesting to see whether SBI Cards’ NPA numbers end up in Q4FY21.

The company’s revenues and net profits did take a hit in FY21 due to the moratoriums and higher NPAs in its portfolio. But the quick recovery in its performance has left many surprised. The fact that the pandemic has pushed many people to digital payments has worked in favour of credit card companies like SBI Cards. 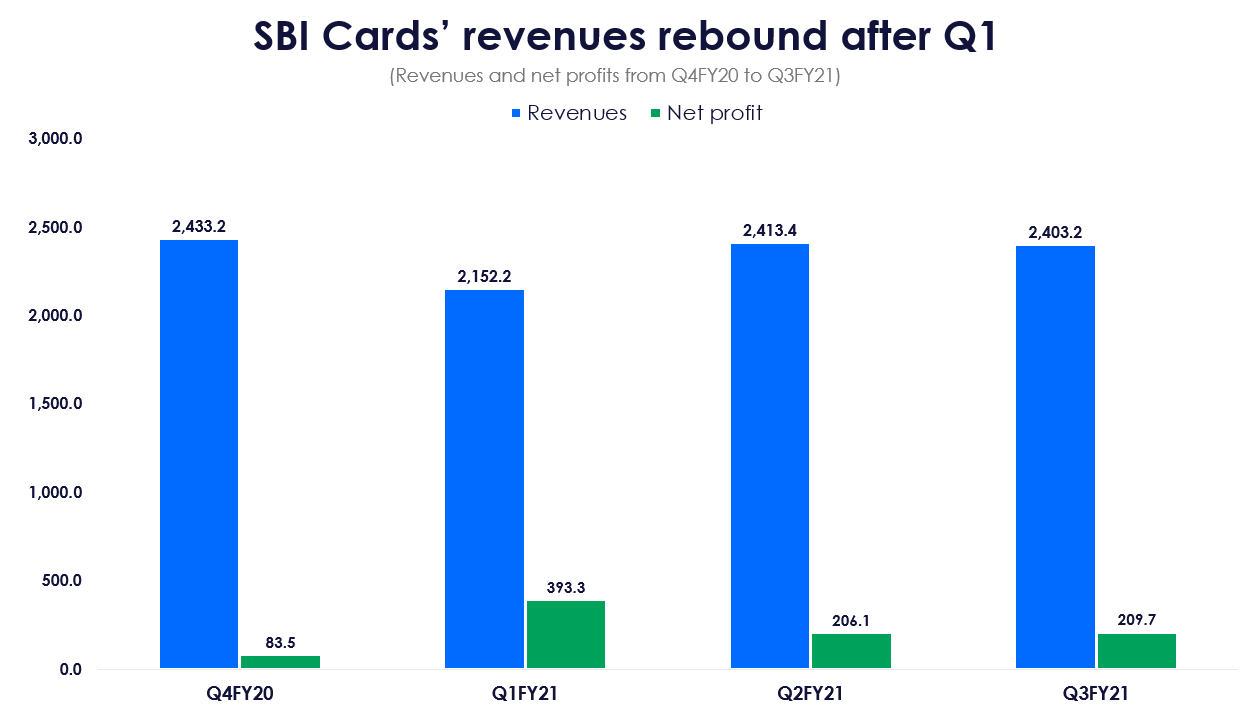 What stands out for SBI Cards is its return on assets (RoA) and return on equity (RoE). Its return ratios are higher than full-fledged banks like HDFC Bank, Kotak Mahindra Bank, even its parent State Bank of India, and even NBFCs like Bajaj Finance andCholamandalam Investment & Finance. 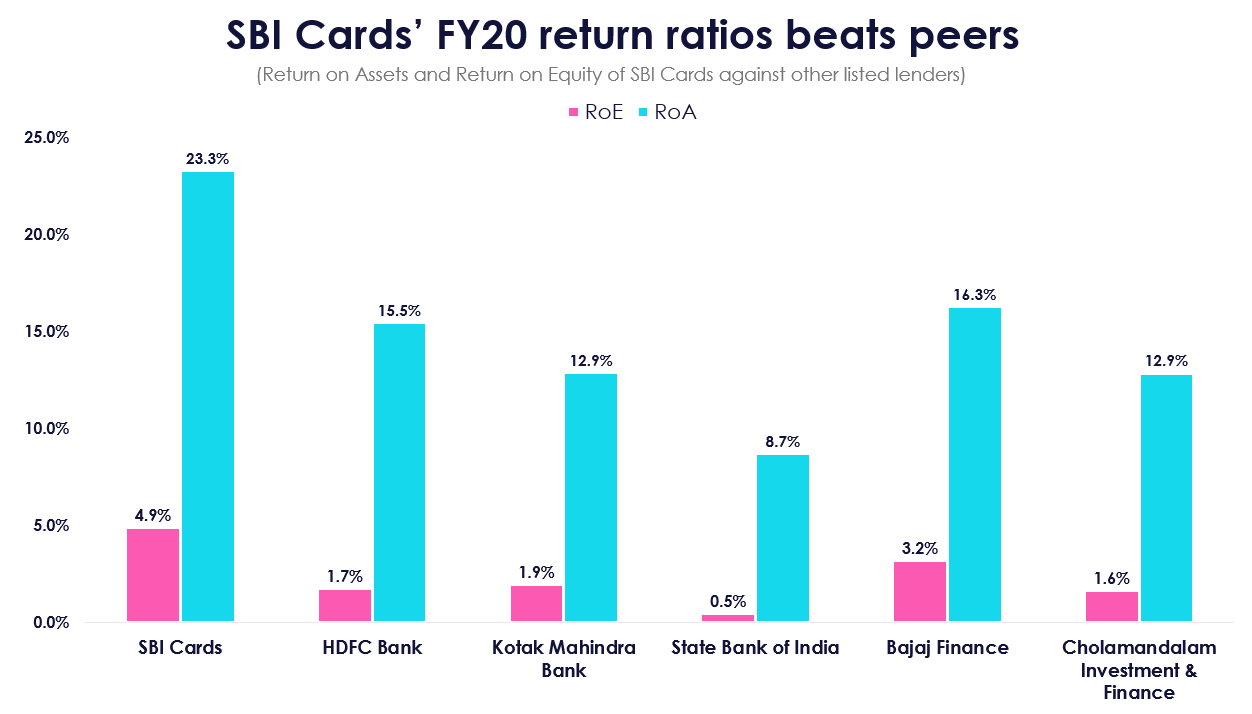 The company’s RoA has been rising steadily over the past four years, while the RoE has been moderating a tad. Even then, the return ratios are so high, it helps the company use internal accruals for its capital requirements. 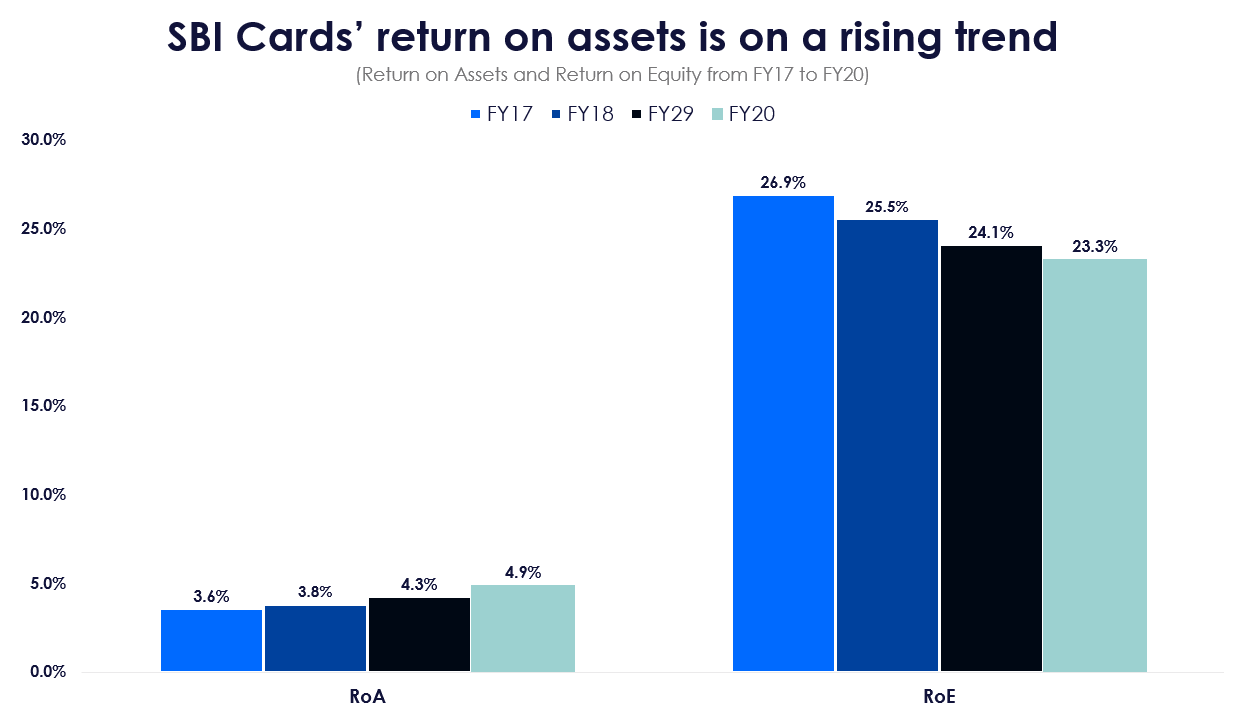 What makes SBI Cards such an interesting company is that the company is  a pure credit cards player. This unsecured credit business earns it a higher return on asset and return on equity compared to other full-fledged lenders, including non-banking finance companies. The company is the second largest credit card player in India with a 18% market share in the number of credit cards issued, and 20% in terms of transactions.

But there are still some risks lurking in the background. There are many fintech players that are wooing the younger population to their platforms through innovative unsecured credit products. The immediate risk though, is the economic impact of a prolonged pandemic. With vaccinations in India slowing, and the second wave of infections rising, there is no clarity on how this will impact various businesses, including SBI Cards. But the street seems to be pricing in the future growth potential fully.

The nature of stock markets over the past year has made many bad stocks look good, but there are some stocks that have good return ratios, but are still trading at low TTM PE ratios.

This screener shows that there are nearly 180 or so profit-making companies from the Nifty 500 that have a high three-year average return on capital employed (RoCE), with a low TTM PE. Out of these, there are four large cap companies - Aurobindo Pharma, NMDC,Hindustan Petroleum and Petronet LNG. Except for Hindustan Petroleum (an average 3-year RoCE of 16%), the other three have a high 3-year average RoCE of 24%.

Among the midcap stocks, there are again just four companies that are currently trading at low TTM PE, despite having a high 3-year average RoCE. These are ICICI Securities, Muthoot Finance and Hindustan Aeronautics and Sun TV Network with an average 3-year RoCE of 35.4%, 35%, 25.8% and 16.7%, respectively.

You can make your own screeners here.

This is part of Trendlyne's Analyticks newsletter, which is delivered directly to the inbox for signed up users. Sign up for free here.