A rising tide lifts all boats goes the saying. That is what the initial public offering (IPO) market for shares currently looks like. Most companies that have raised funds through primary issues, or offer for sale of shares to the public, are seeing record subscription numbers. And retail investors have been participating in droves in recent IPOs over the past couple of months.

In the midst of a volatile market that has been testing new highs but giving them up as quickly, another IPO has hit the streets. Stove Kraft, backed by American venture capital (VC) firm Sequoia Capital, is now in the third day of its IPO, and by the looks of it, retail and other non-institutional investors have lapped up this share sale.

This is despite one of the kitchen appliance maker’s prime differentiator—its trademark Pigeon—being under dispute with a company controlled by its promoter. This report hints that it is the result of a tussle between the VC backers and the promoters. The company also sells products under its Gilma brand, and has entered into a contract to manufacture Black & Decker’s kitchen appliances in India. It also entered into the LED bulb business a few years ago to take advantage of the government’s push to increase penetration of LED bulbs. However, large and small cooking appliances make up a big chunk of its business.

But is the business of the company or the kitchen appliances industry a compelling story that retail investors have been lapping up the shares of Stove Kraft? Let’s find out.

The kitchen appliances and consumer electronics industry was worth Rs 2.1 lakh crore in 2017, according to Frost & Sullivan. The urban markets account for nearly 65% of this pie, and is expected to grow to Rs 3.2 lakh crore by 2022. Out of these, large and small cooking appliances are estimated to be about Rs 14,850 crore, and are set to reach Rs 23,800 crore by 2022.

Stove Kraft’s initial public offer consists of an offer for sale of up to 82.5 lakh shares and a fresh issue of shares of Rs 95 crore. At the upper of the price band of Rs 384-385, the offer for sale will mop up around Rs 317.6 crore for the selling shareholders. The fresh issue will be used to pay off debt of Rs 76 crore, and the rest for general corporate purposes.

Venture capital firm Sequoia and promoters Rajendra Gandhi and Sunita Gandhi are selling their stakes in the offer for sale. The promoters’ stake will go down to 54.36% post the IPO.

At the upper end of its price band, Stove Kraft is valued at 395.3 times (post issue) its 2019-20 (FY20) earnings. If we consider the compulsorily convertible debentures worth Rs 184.7 crore on the company’s books, this comes down to 367 times its FY20 earnings.

This is high compared to the industry - Stove Kraft’s listed peers like TTK Prestige, Hawkins Cookers and Butterfly Gandhimathi Appliances are valued at around 59 times, 47 times, and 449 times, respectively, of their trailing twelve-month earnings. On the basis of FY20 earnings, TTK Prestige, Hawkins and Butterfly are valued at nearly 45 times, 42.3 times, and 284.3 times, respectively.

Considering only 10% of the total issue is reserved for retail investors, they have already placed bids worth 13 times their available quota of 10.7 lakh shares. The company has already raised Rs 185 crore from anchor investors.

The company’s financial performance in the first half of FY21 ending September 2020 makes it appear that business is looking up. However, if we scratch the surface, the 6-fold year-on-year rise in net profit for the six months ended September 2020 (to Rs 28.8 crore) throws up more questions than answers. 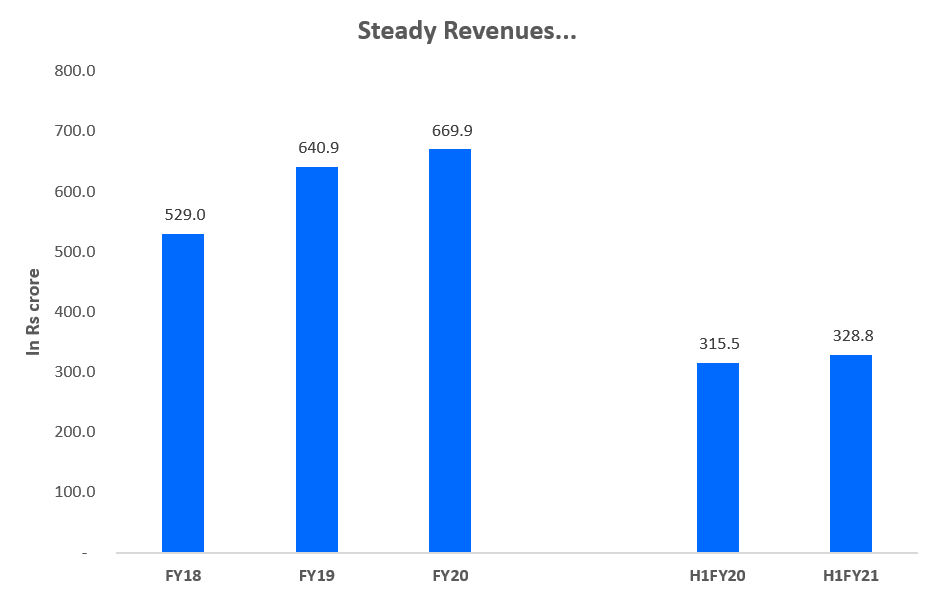 Firstly, the spike in profits was more because of lower costs in the six months ending September 2020 than the business growing. The company’s business was impacted severely because of the COVID19 pandemic as its plants in Bengaluru and Baddi (in Himachal Pradesh) were shut for around one-and-a-half months. 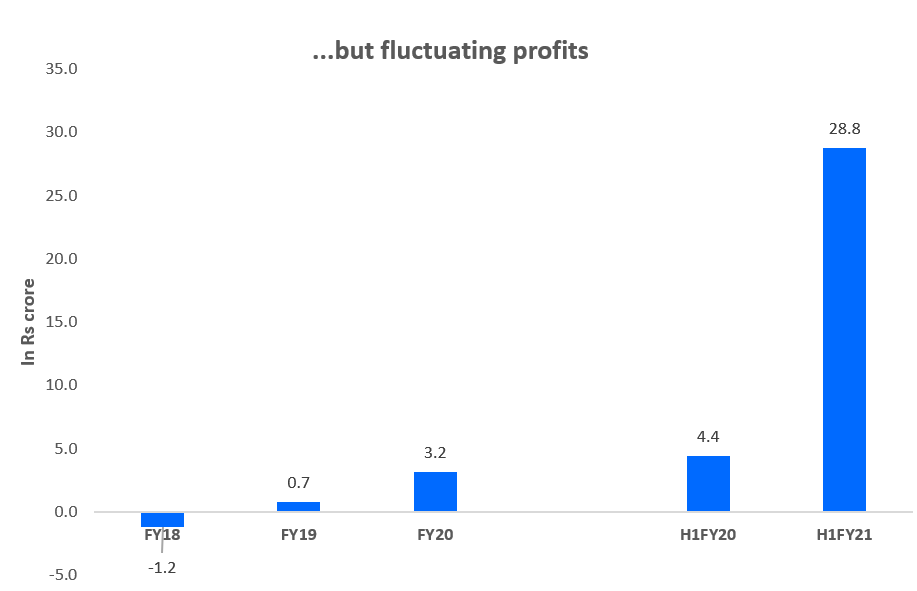 The lockdowns in early 2020 also impacted its supply chains as the imported products the company sells did not arrive in time. As a result, between March 25, 2020 and May 3, 2020 the company could only import traded goods and raw material worth Rs 1.5 crore compared to the typical average monthly import of approximately Rs 15 crore. This impacted revenues from sale of traded products. As a result, revenues generated from the sale of traded products reduced to Rs 62.65 crore for the 6 months ended September 30, 2020, compared to Rs 93.60 crore in the same period a year ago. 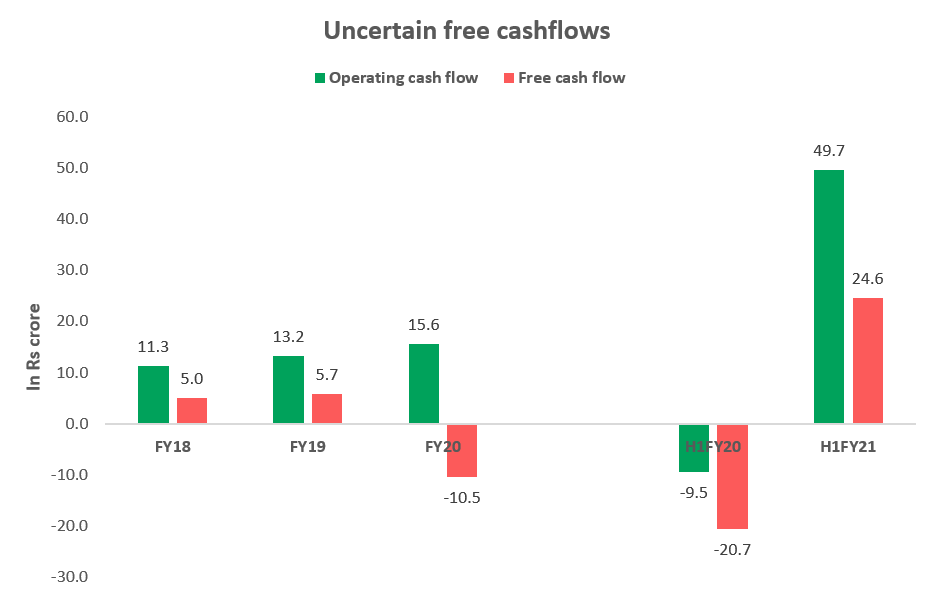 Other expenses during the same period fell by 27% YoY to Rs 38 crore led by a near 60 % fall in advertisement expenses to around Rs 5 crore. These are temporary blips, and once business picks up, the company will most likely not be able to sustain the 8.8% net profit margin that it achieved during the six months ended September 2020.

Even though Stove Kraft’s IPO might sail through, investors should be wary of Stove Kraft’s business model. Retail investors and non-institutional investors have already ensured that the issue is subscribed nearly 3 times the shares on offer at the end of the second day of the IPO.

The various litigation that the company finds itself in, including the one related to its Pigeon trademark being used by a promoter-controlled associate company beyond the legally allowed terms, hangs over its future. Considering the Pigeon brand name is what is being touted as its differentiating factor, the outcome of this case can have an impact on its revenues.

Additionally, the company’s financial strength is shaky and nothing to write home about, despite it generating free cash flows of Rs 24.6 crore in the six months ended September 30, 2020. For investors who are looking at a play on the long-term prospects of the kitchen appliances industry, there are many other better listed companies available.