In an era of low interest rates investors are yield shopping. Safer investment options like government bonds are at decade lows. And with there being a flood of liquidity through actions of global central banks, a lot of money is looking for a higher return.

This has put the focus on InvITs in India. Many high-net worth investors in India have joined institutional players to look at Infrastructure Investment Trusts, or InvITs, as an investment option.

India Grid Trust (IndiGrid) is one such InvIT that houses power transmission assets. IndiGrid has recently acquired some solar power generating assets as well. It is the only listed InvIT in India which was initially backed by Sterlite Power, but now PE firm KKR is its co-sponsor, and owns 60% of the InvIT’s investment manager IndiGrid Investment Managers. The security currently trades at Rs 126 and will earn investors a dividend yield of 12%

With infrastructure financing in focus, and some InvITs providing a steady stream of income for investors, what is making IndiGrid a favourite of some investors?

Constant payouts in face of the pandemic

Since its listing, IndiGrid has paid out a total dividend of Rs 39.56 per unit to investors over 14 quarters. This averages to around Rs 3 per unit per quarter. The fact that InvITs have to distribute a minimum 90% of its net distributable cash flow makes the dividend payouts more predictable. 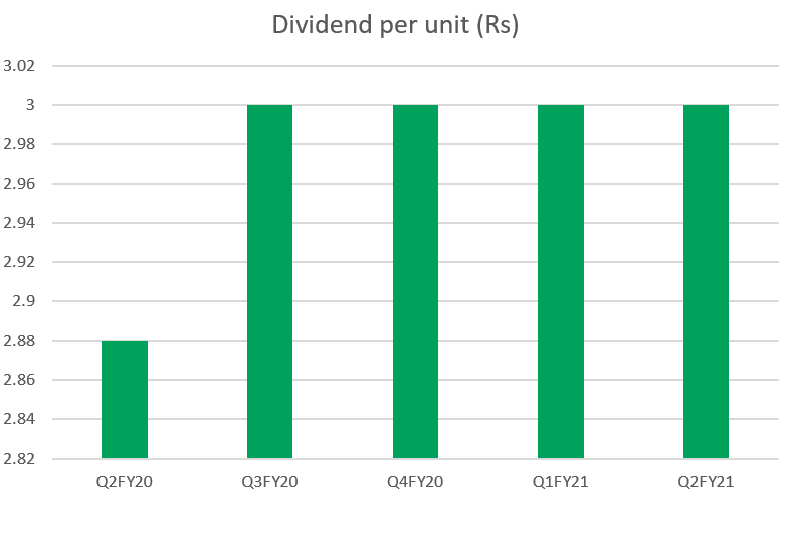 IndiGrid even managed to pay its investors the average dividend per quarter under the cloud of the pandemic. In April 2020, the power sector was hit with a crisis of payments. Many state governments had allowed state power distribution companies (discoms) to delay their customers’ bill payments.

There was already a mounting pile of overdue receivables from discoms to power generators. This extended even to transmission companies, and as an extension, to IndiGrid’s transmission assets. The receivable days rose to 101 days in the quarter ended June 2020. At the end of the September 2020 quarter, it improved to 83 days.

IndiGrid’s transmission assets get money from the centrally pooled billings based on availability of its assets, so as long as its assets are available to transport power, IndiGrid’s SPVs can raise invoices. The central pool then allocates the collections made from discoms and power generating companies to the transmission line owner.

This has helped IndiGrid weather some of the pandemic storm that affected the rest of the power sector.

Large asset base with long lifespan

IndiGrid has a total of Rs 13,900 crore assets under management spread across 14 Indian states and one union territory. It has a total of 11 special purpose vehicles under which it houses these assets.

The average residual life of assets are 32 years. This the management claims gives investors a long predictable return period. But some of these contracts give a higher return in the initial period and lower in the later periods. As a result of which, IndiGrid will have to continue acquiring assets that allows it to stabilise its quarterly dividend payout.

When it listed, IndiGrid had only three transmission assets that it had taken over from Sterlite Power. The trust and Sterlite Power have a framework agreement for another Rs 6,500 crore worth of assets. IndiGrid has an aspiration of reaching Rs 30,000 crore AUM by the end of FY 2022. This would mean it will double its current AUM in 15 months.

With an aspiration of Rs 30,000 core by the end of the next financial year, some of the expansion in AUM is funded by debt. At present, IndiGrid’s is at 54% of its AUM. SEBI regulations allow for it to borrow up to 70% of AUM.  Only once that regulatory cap is near will the management look at more equity infusion. The company is looking to bring down its average interest cost of 8.5% to further boost its dividend distribution to investors.

After the trust consummates its November 2020 deal to acquire PKTCL transmission assets from Reliance Infrastructure, and the takeover of FRV Solar’s two projects, the debt-to-AUM will rise to 58%. The acquisitions are expected to be completed by the quarter ended March 2020 and add Rs 225 crore to its annual EBITDA in FY20 of Rs 1,150 crore.

There are nearly Rs 40,000 crore worth of assets in the solar energy and power transmission space that will come to the market in the next five years. IndiGrid is looking to bid for some of these assets over the next few years to build up its AUM.

With investors starving for predictable returns on traditional debt assets, IndiGrid is trying to position itself as a stable yield vehicle for investors.