After falling off a cliff in early 2020-21, India’s economy is expected to limp back to some semblance of normalcy. According to advance estimates by the Central Statistics Office India’s FY 21 GDP is expected to contract by 7.7% In the first quarter of the year, GDP contracted by 23%, and by 7.5% in the quarter ended in September 2020. The central body expects the October-December quarter to show marginal positive growth as commercial activity returns to normal.

One of the key beneficiaries of commercial activity resumption will be the cement industry. As housing demand picks up and infrastructure projects resume, cement production has recovered from the lows seen in April-June 2020. In the face of this rising demand for cement in Q4 and beyond, many cement companies have not only restarted but also increased their capital expenditure (capex) allocation. This is because many cement firms may have to contend with demand outpacing supply.

Rising capacity and production heading into Q4 will be accompanied by a revival in capex allocation by major cement companies. In the first two quarters of FY21, with little demand and the need to conserve capital, cement companies decreased or deferred capex for the year. Now, as demand comes back, so is capex.

Ultratech Cement announced a capex of Rs 5,470 crore to increase capacity by 12.8 metric tonnes (MT). Earlier this month it raised Rs 1,000 crore by issuing non-convertible debentures. ACC allocated Rs 3,000 crore capex funded through internal accruals, which is expected to come on stream in 2022. In January 2020, it commissioned a new production facility at its Sindri grinding unit increasing capacity by 1.4 metric tonnes per annum (MTPA).

Shree Cement announced a capex of Rs 1,000 crore expecting to double its current capacity of 35 MTPA in the next 7 years. JK Cement’s capex stands at Rs 1,577 crore in this fiscal year, commissioning 4.2 MT of capacity. JK Lakshmi Cement, under the same parent organization as JK Cement, added a capacity of 2.5 MT at its Udaipur plant for a capex of Rs 1,400.

Some cement companies are instead using funds to reward shareholders and reduce debt. Ambuja Cements did not allocate capex funds for FY21 and paid out a dividend of Rs 17 per share in October 2020, higher than the Rs 3 per share dividend it usually gives out. Heidelberg Cement, reduced net debt to Rs 71,000 crore in September, from Rs 82,000 crore in March.

In the quarter ended June 2020, the cement industry’s capacity utilization was 52%. It rose to 70% by the end of September 2020 and  80% in November 2020. This shows a gradual return to pre-COVID levels of activity. However, capacity utilization rising on a monthly basis was still disrupted by an insufficient labour force and staggered shift operations. 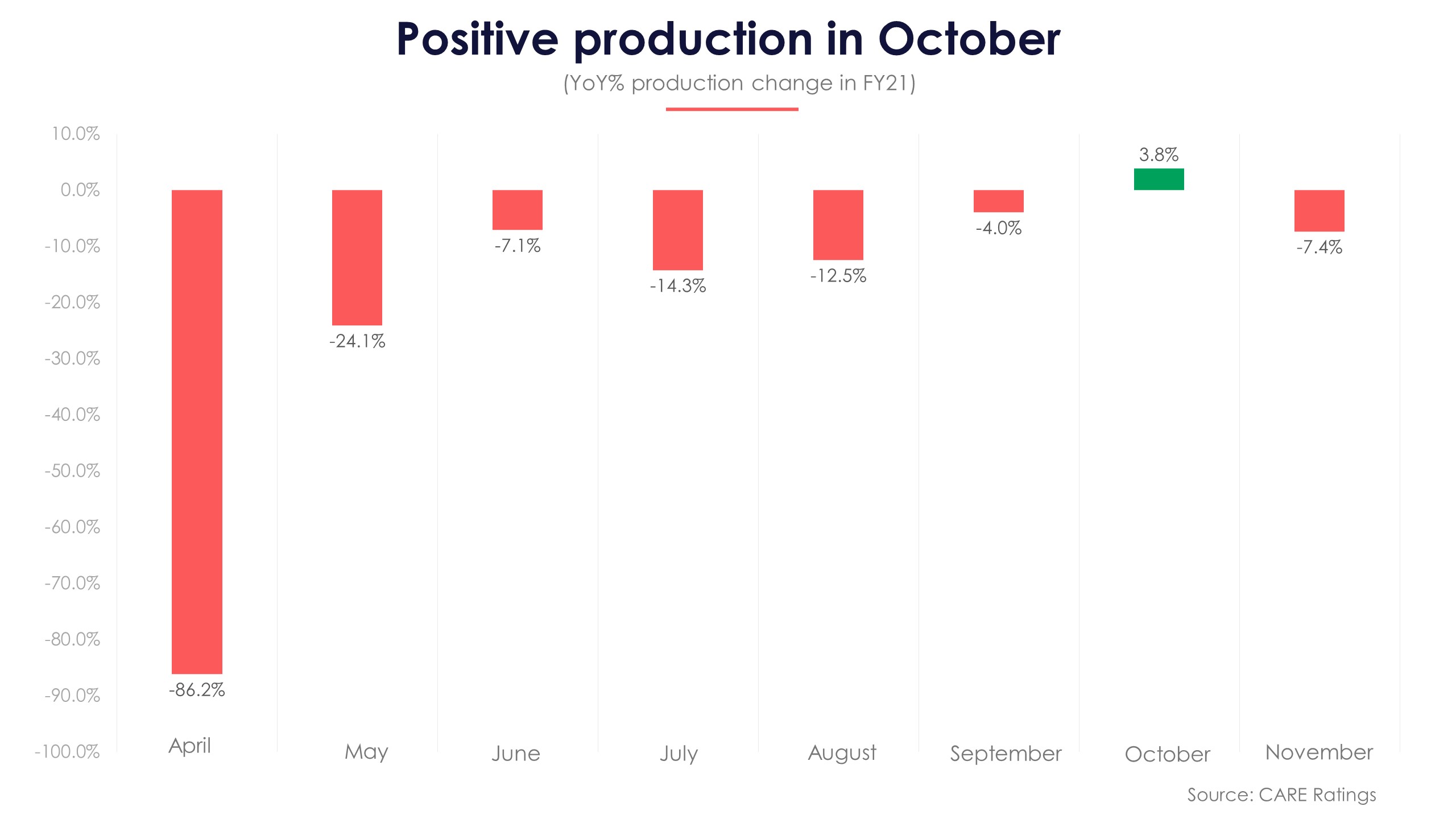 For the first eight months of FY21 (April 2020 to November) production dropped by 19.5% YoY. The severity of the drop was due to the massive production drop in April and May 2020 (86% and 24%) during the lockdown. In March 2020, construction activity was at its peak.

With capex resumption, utilization, and production increasing month-on-month, the total capacity addition is expected to grow at a CAGR of 4.2% between FY21-23, according to ICICI Securities. However, this is lower than the rate of demand stemming from the revival in the housing and infrastructure sector.

At the end of the September quarter, cement companies saw revenues move up marginally by 3.4% and net profits increase by 62% on a YoY basis. The growth was led by India Cements, Sagar Cements, Orient Cement, and Dalmia Bharat, with net profits increasing in triple digits annually.

In the Q2 earnings call, the management of cement makers said the rise in demand for cement came from rural and semi-urban housing and infrastructure, which contribute over 75% of total industry demand. 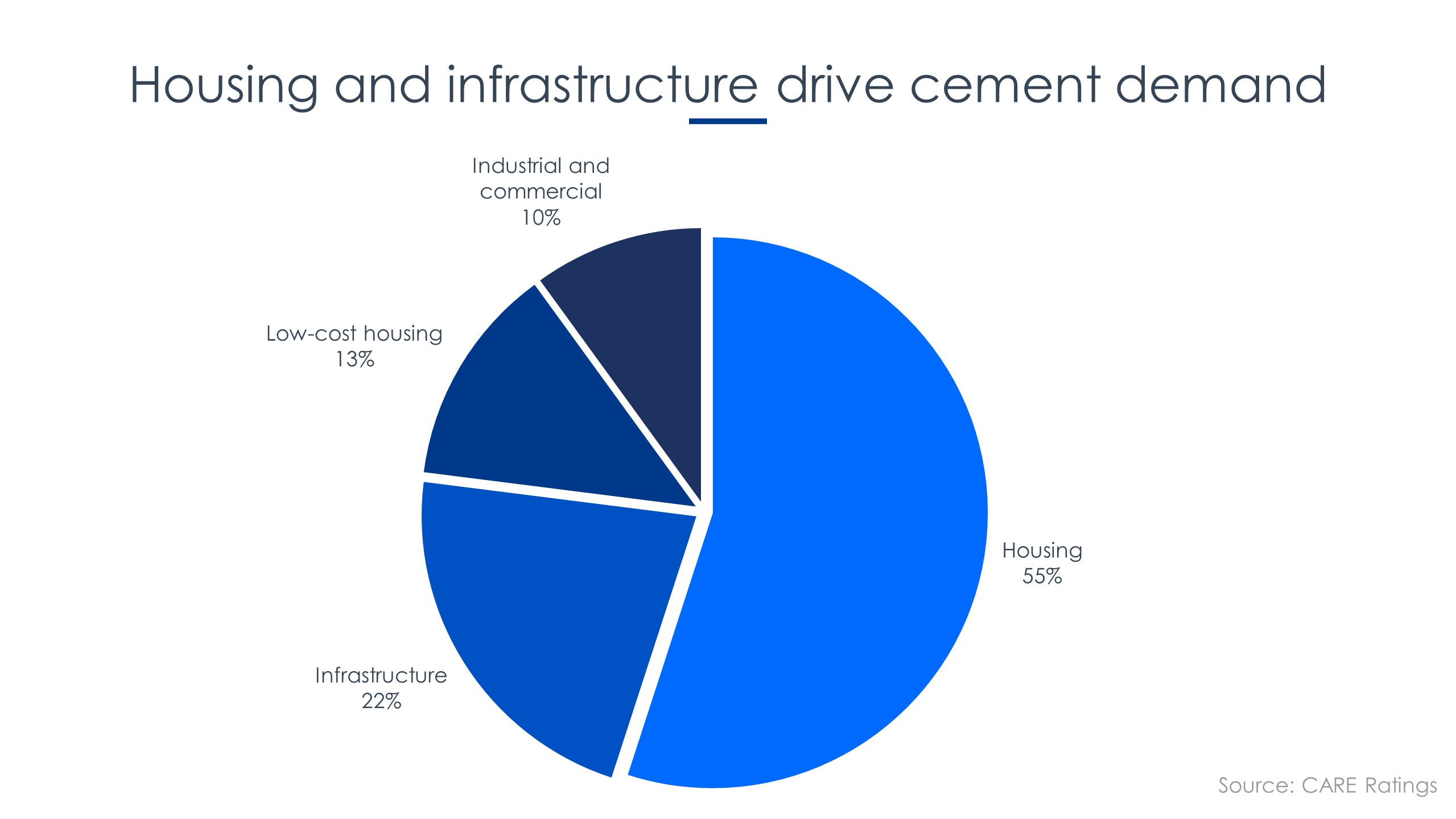 The central government’s Rs 18,000 crore urban housing scheme under Atmanirbhar Bharat boosted individual real estate projects in rural areas and affordable housing in semi-urban areas. ICICI Securities said companies like Ultratech Cement and Orient Cement which have a larger presence in rural areas will continue to benefit from this demand.

For cement companies catering to urban housing markets, demand may be boosted by state governments decreasing stamp duty. Stamp duty is levied when purchasing a property in order to legalize ownership. A decrease in stamp duty makes buying a new property cheaper. This was done to boost demand for homes.

In August, the Maharashtra government decreased stamp duty to 2% from 5% until December 2020. This had an immediate effect. In Q3, property sale registrations in Mumbai was over 36,000 units, a two-fold jump on a quarterly basis. However, sales will first increase for piled-up properties that will not contribute to cement demand. This might later trickle down to greater real estate demand for new projects due to lower acquisition costs.

The Maharashtra government provided another impetus to the real estate market by slashing all premiums by 50% till December 2021. Real estate companies pay several premiums to state governments which amounts to 25% above the project’s cost.

In November, the Karnataka government reduced stamp duty to 3% from 5% for apartments less than Rs 20 lakh. Other states like Tamil Nadu and Uttar Pradesh are considering reducing stamp duty to help real estate sales. This can provide a fillip to cement demand.

The affordability of these housing and infrastructure projects will be helped by low-interest rates said ICICI Securities. With these two sources feeding demand, analysts expect cement demand to increase at a CAGR of 6.3% between FY 21-23. This explains why Ultratech Cement, The Ramco Cements, and JK Cement hit a lifetime high, and Shree Cements, Ambuja Cements, ACC, and Dalmia Bharat hit a 52-week high last month.