A stock that many market participants love to deride is ITC. With the company’s shares declining in the past few years compared to the broader market, it is not hard to imagine why. In the past three years, ITC’s stock price has nearly halved from a high of Rs 331 while the Nifty 50 has risen nearly 30% in the same period.

Over the past decade, the company’s management has been using its cash cow cigarettes business to seed and grow other businesses and revenue streams like FMCG, hotels, agriculture, and paperboards, paper & packaging. Investors had hoped that ITC’s decision to scale up these businesses using the cash flows of its mainstay cigarettes business would lead to increased profits.

Q2 Results Hint That ITC’s Bets Might Pay Off

The company’s consolidated net profit fell 18.1% YoY to Rs 3,419 crore. Helped by the opening up of the economy during the quarter, the company posted a 33% sequential rise in net profits helped in large part by rising margins in its ‘FMCG-Others’ segment. This segment consists of branded packaged goods, personal care products, education and stationery products, incense sticks and safety matches. 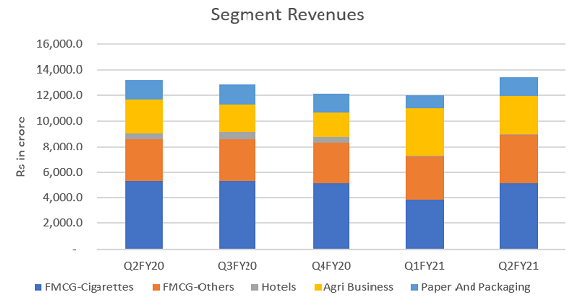 The FMCG-Others segment saw revenues rise by 15.4% year-on-year to Rs 3,795 crore. This was the highest quarterly revenue recorded by the segment. On a comparable basis, excluding education and stationery products and lifestyle retailing business which is under restructuring, the revenues rose 18.4% YoY. The segment’s EBIT margins also rose 300 basis points (bps) YoY to 6.7% during the quarter.

Revenues in the FMCG-Others segment were helped by new product launches by ITC during the lockdown period, and also movement to newer channels like e-commerce and tie-ups with companies like Swiggy, Dunzo and Domino’s to deliver staples to customers. Revenues from e-commerce have doubled and now make up 5% of revenues of the segment at the end of September 2020.

Local lockdowns in various states continued to impact the FMCG-Others segment, and the growth in sales has come from staples and hygiene products. In May 2020, ITC had acquired Sunrise Foods--a spice maker--for Rs 2,150 crore. The company plans to use its supply chain prowess to scale up its acquisition of Sunrise Foods to drive profitable growth.

The Agriculture segment saw revenues rise 12.8% YoY to Rs 2,985 crore. On a sequential basis, revenues were down 20.3%, but this was due to seasonality in the business. EBIT margins came in at 8.6% compared to 9.4% a year ago. This segment is expected to benefit from recent reforms undertaken in the farm sector by the Central Government.

The mainstay Cigarettes showed recovery in Q2FY21 as the segment’s revenues grew on a sequential basis by 33% to Rs 5,121 crore. However, when seen on a year-on-year basis, the revenues are down 3.9%. There is still some way for this business to recover. Its EBIT margins rose 30 bps on a sequential basis to 63.4%,  but fell nearly 900 bps on a YoY basis. Like the FMCG-Others segment, this segment also continued to be impacted by localised lockdowns across states.

The hotels segment continues to reel under the aftermath of the pandemic led lockdowns. Travel remains restricted and will take time to pick up to normal levels. Revenues were at Rs 82 crore and it posted an operating loss (negative EBIT of Rs 185 crore) for a third consecutive quarter.

There are multiple factors weighing on ITC’s stock. FIIs have been exiting the stock steadily over the past two years. FII holding in ITC was 13% at the end of September 2020 compared to 17.3% two years ago. In the same period, domestic mutual funds have raised their holding in the stock by only 210 bps to 9.9%. This has coincided with ITC’s underperformance vis-a-vis the Nifty 50.

This gradual reduction in FII holding has been attributed to ESG related issues by market participants. However, the company points out that it has been ranked as the top among its peers having market capitalisation of $38 billion to $51 billion, according to ESG rating agency Sustainanalytics. It also states that in the foods products business it has been rated in the top three companies by the agency.

Then there is the always possible stake sale by the Central Government of the 7.9% stake held by Specified Undertaking of The Unit Trust of India. This hangs like a sword of damocles over the company’s valuation.

The original sin of being a cigarette company has also impacted ITC. The high tax incidence on cigarettes has led to slowing revenue growth -  rising taxes on ‘sin goods’ like cigarettes, especially in an environment where the government is falling short of revenues, leads to a rise in sale of illicit cigarettes. This hurts companies like ITC which is the sector leader.

Last, but definitely not the least, many investors are still not convinced that ITC can deliver on the promises of building a highly profitable FMCG business. This contention does divide the market though. While FIIs and other market participants fret over future returns from the FMCG portfolio, there are some domestic mutual funds like Parag Parikh, ICICI Prudential, Sundaram, among others that have been snapping up ITC shares over the past few months.

This is symptomatic of how the market views ITC as a conglomerate. The company has stated that it has completed its capex cycle to scale up its various businesses. Its capital allocation policy of returning 80%-85% of its profit after tax as dividends should ideally cheer investors. However, the stock price continues to languish below Rs 200 at the moment.

Is ITC’s night darkest before a new dawn? Only time will tell. Till then, its high dividend yield of over 5% should offer some succour to investors