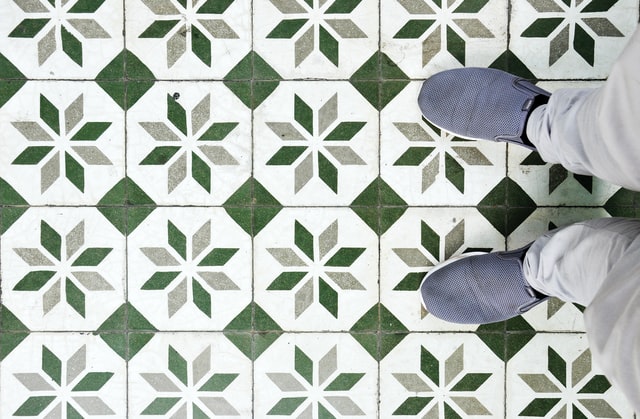 Building materials is a big space, and tiles and sanitaryware take up a good chunk of this industry, being among the most widely used items in …

Building materials is a big space, and tiles and sanitaryware take up a good chunk of this industry, being among the most widely used items in the construction of homes and buildings. The key raw material for both is essentially the same i.e. clay, which along with other components are fired in an oven to produce the finished product.

The story of the tiles and sanitaryware industry centers around India’s “ceramic city”, the town of Morbi in Gujarat. It is the hub of India’s ceramic manufacturing, and accounts for nearly 80% of the country’s production. Morbi is the second largest tile manufacturing cluster in the world after Foshan in China. It houses more than 800 units. While most of the manufacturers are unorganised, small and medium-scale units, a few have formed joint ventures with branded players. Very few have been successful in creating their own brand. The market leader Kajaria Ceramics also commissioned a plant here in April 2022. Orient Bell and Asian Tiles have their manufacturing entirely based out of Morbi.

In FY22, tile and sanitaryware manufacturers based out of Morbi, as well others with a national presence like Somany Ceramics and Cera Sanitaryware, delivered their highest ever annual revenues on the back of rising exports as well as a boom in real estate. This growth is additionally impressive since it came in an environment with steeply rising gas prices and a shortage of shipping containers.

The pandemic prompted tile and sanitaryware makers to look for opportunities beyond a domestic market, which saw declining demand. Compared to FY20, these companies (pre-Covid19) were able to improve their performance YoY in FY22 and reached their all-time highest revenues and profits. 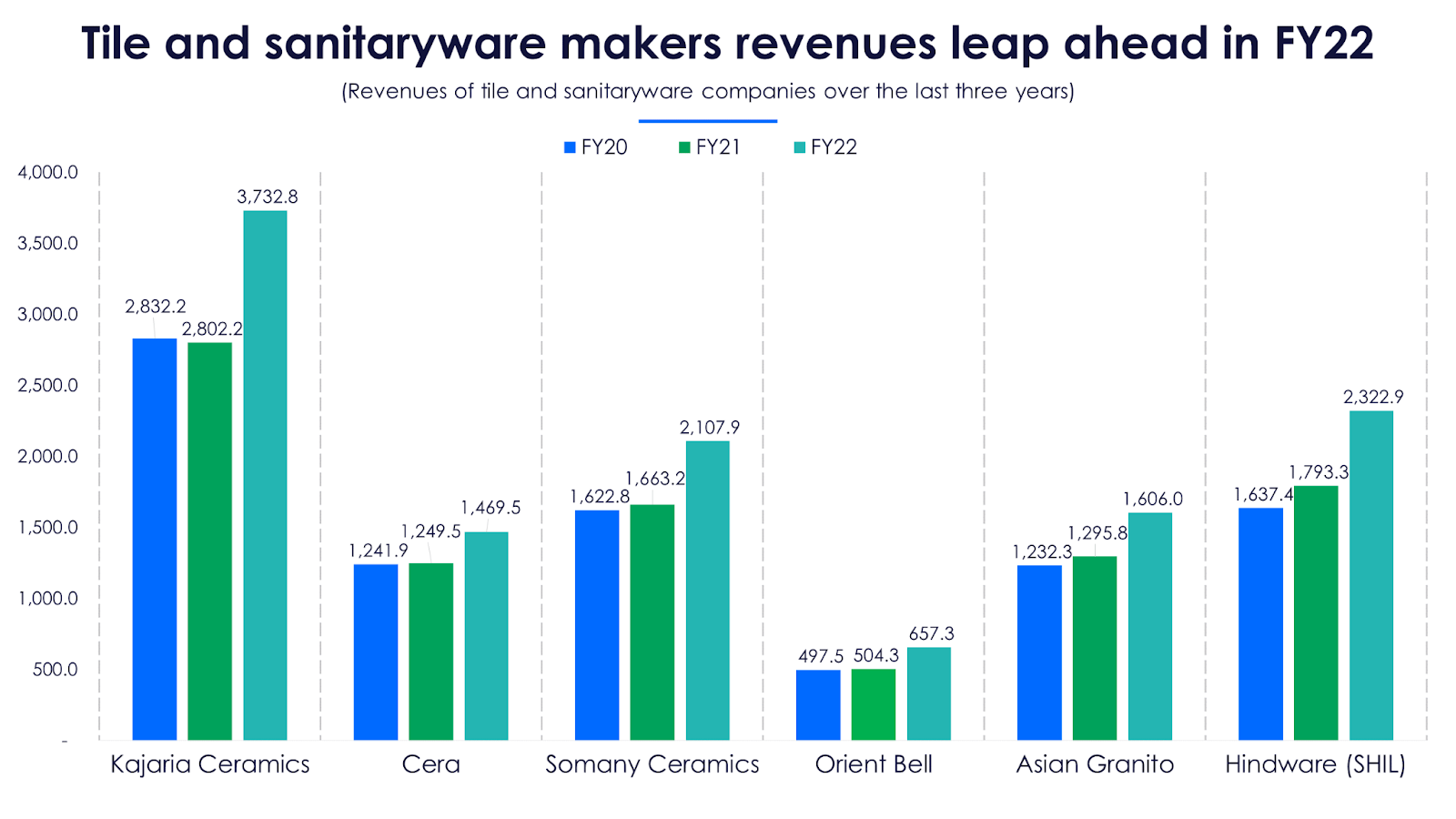 Revenues for market leader Kajaria Ceramics grew the highest, rising by 32% YoY in FY22 at Rs 3,732.8 crore, while revenues for smaller players like Orient Bell’s grew by 30% YoY to Rs 657.3 crore in FY22. Hindware was formerly known as SHIL (Somany Home Innovation Limited), The company changed its name to Hindware Home Innovation in May 2022. Its revenues grew 29.5% YoY in FY22 to Rs 2,322.9 crore.

The outbreak of Covid-19 turned out to be an opportunity for tile exporters. The outbreak in China created a vacuum in the tiles export market, which was very quickly filled up by Morbi-based tile manufacturers. Export demand came at a fortunate moment for these Indian players, who were dealing with stagnating demand and weakening prices in the domestic market.

Earlier, the GCC (Gulf Cooperation Council) proposed an anti-dumping duty on Indian tiles in June 2020. It deferred its decision partly due to the Centre’s efforts, and partly due to the pandemic outbreak. While certain players faced order delays due to a shortage of shipping containers, most of them were able to make profits on export orders. 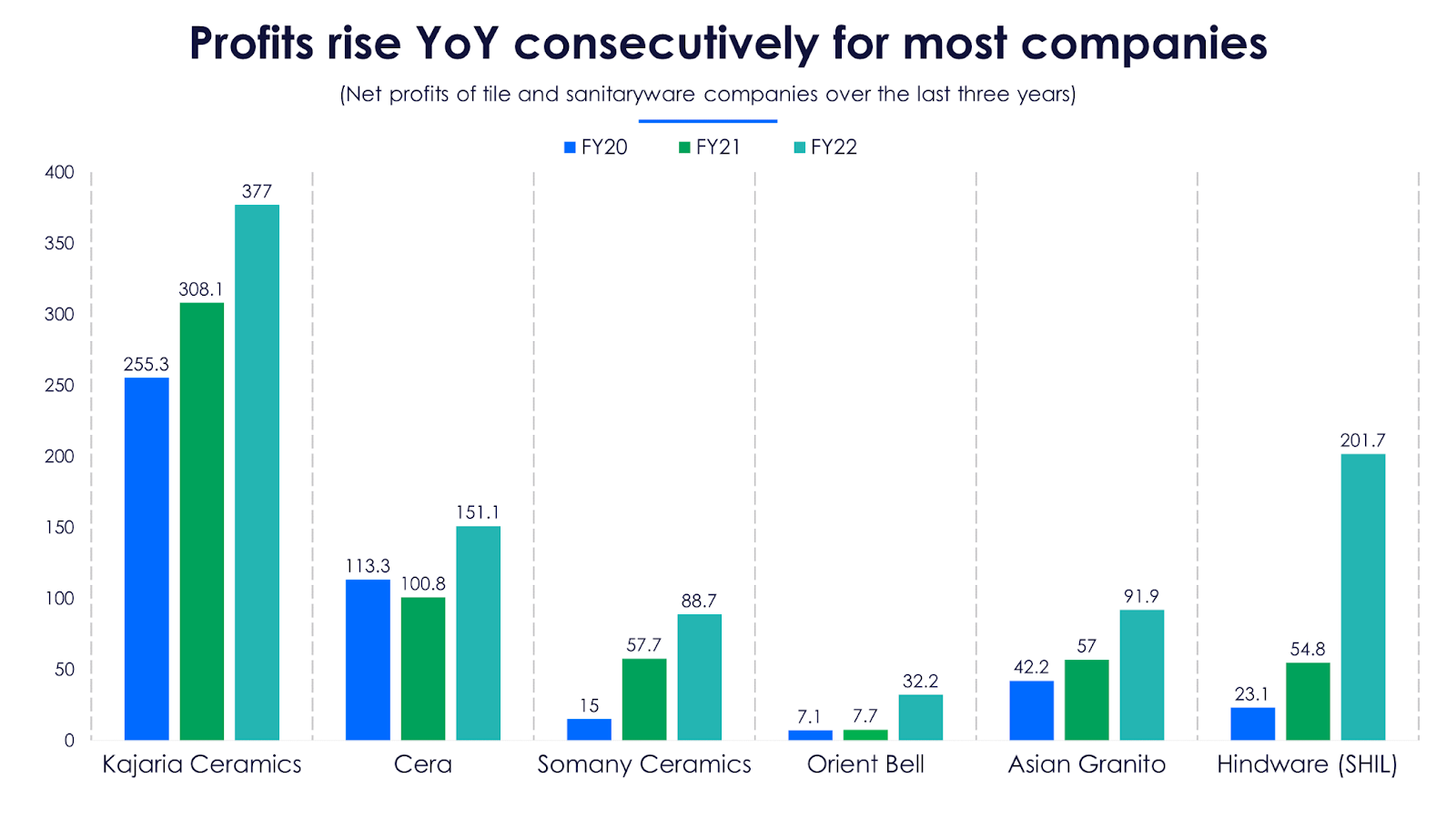 The growth story of the industry can be attributed to government schemes including the Pradhan Mantri Awas Yojana (PMAY), both in rural as well as urban areas. With the subsidy available for houses upto a certain price limit, making many properties eligible for the scheme, lower to middle-income groups availed of the facility and gained ownership of properties.

With work from home being the norm during the pandemic, empty premises of many buildings including schools, offices, and factories were available for renovation work. This was also a major contributor to growth.

Kajaria Ceramics is expanding its operations, set up a new facility in Morbi, and commenced commercial production in April 2022. Capacity expansions at Gailpur and Srikalahasti were commissioned in May 2022. The board of directors withdrew the proposed investment in slab manufacturing capacity in Gujarat (capex of Rs 210 crore) as the project became less viable due to a steep rise in gas prices, and inconsistency in gas supply at Morbi. 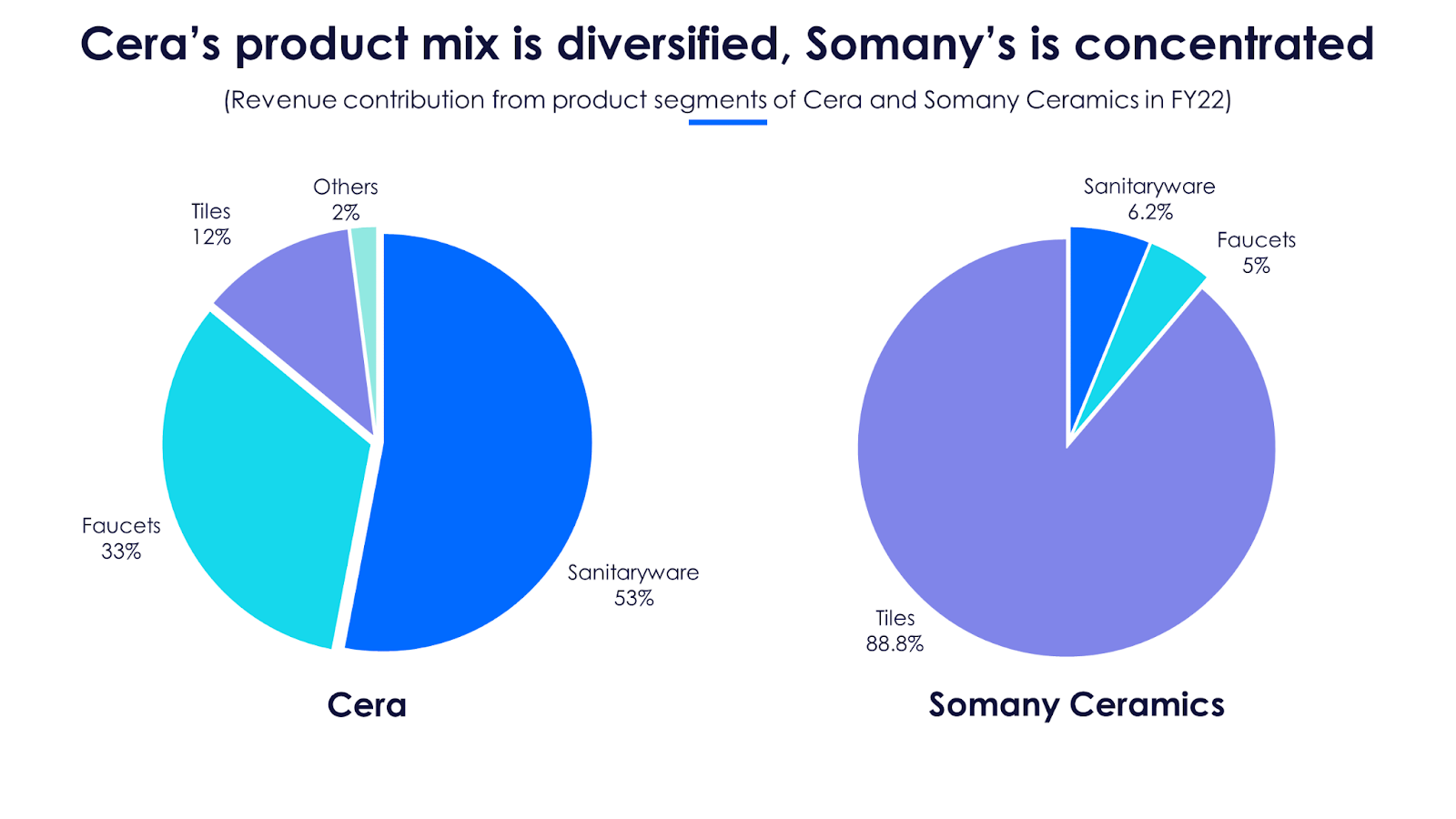 Most companies in this space are diversified offering a wide range of ceramic products including, tiles, sanitaryware, bath fittings, marble, and even home decor.

Orient Bell is the only company that is purely a tile manufacturer. Sanitaryware manufacturer Cera Sanitaryware for example has over time, diversified its product mix. In FY22, sanitaryware contributed about 55% of its revenues, while the rest was split between tiles and faucets. Somany Ceramics’ product mix, on the other hand, is concentrated with tiles contributing 88%.

Cera’s management expects a revenue CAGR of 15% in the sanitaryware segment over the next two years. The greenfield sanitaryware facility is expected to commission production in 24-30 months at a capex of Rs 128 crores. In the faucet segment, the company is expected to commence production in Q1FY24, with an enhanced capacity of 1.2 million pieces to reach a total capacity of 3mn pcs. The total capex planned for the brownfield expansion of its faucet facility is Rs 69 crore.

Somany Ceramics was able to deliver a good set of numbers in FY22 despite volumes being impacted. Its volumes were affected by a production line at its Kadi plant shutting down in January 2022 due to the expansion of existing lines, and a one-off disturbance in the existing capacity of its Kassar plant due to the modernisation and expansion of a production line. New capacity of 11 million square metres (MSM) will be operational in Q1FY23.

Additionally, a greenfield manufacturing facility of slab tile of around 4 MSM/annum in Gujarat is expected to commence production during Q1FY24 with a  capex of around Rs 170 crore. 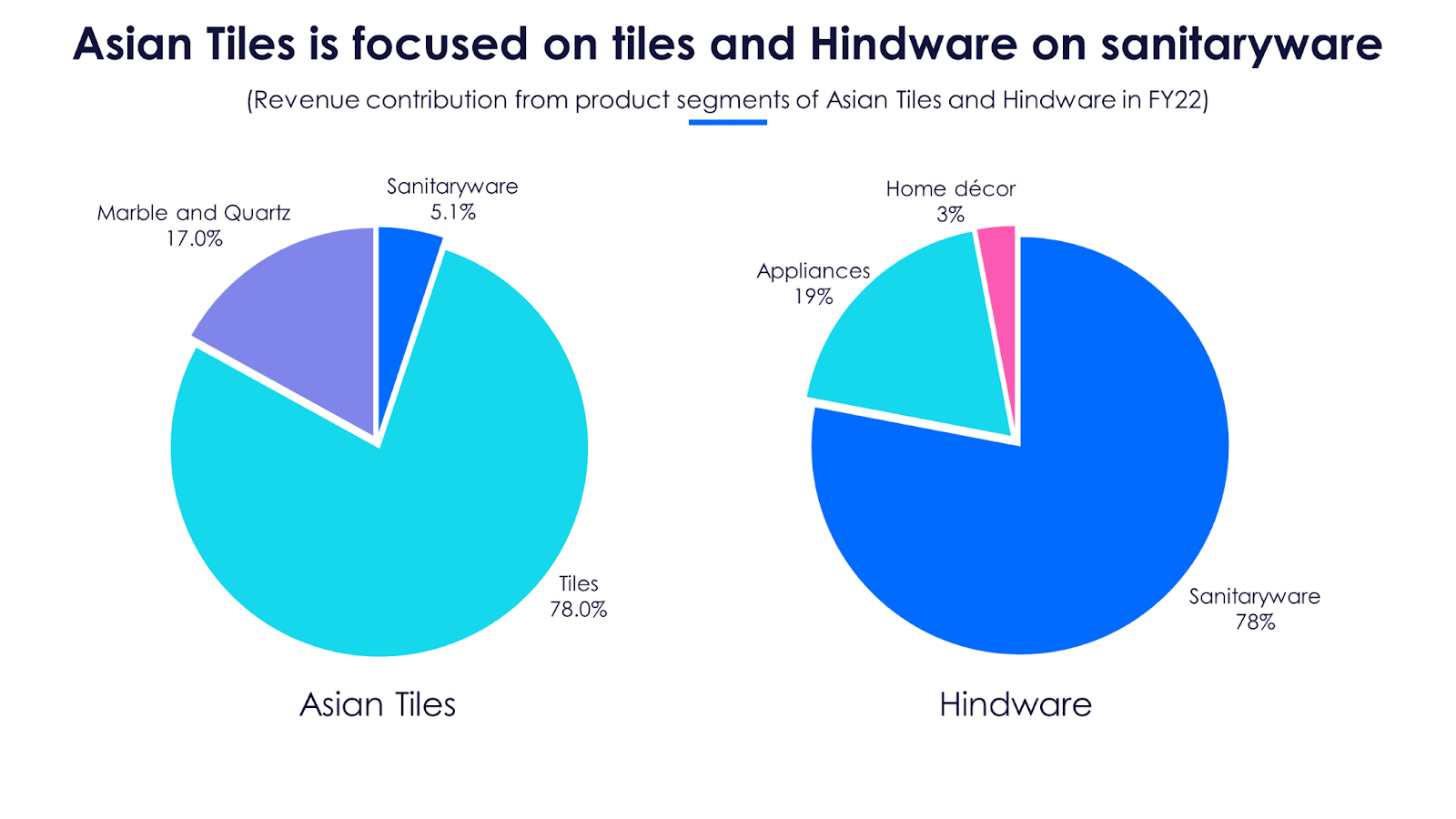 Asian Tiles derives 78% of its revenues from tiles and 17% from marble and quartz. Hindware, one of the oldest sanitaryware brands, generates 78% of its revenues from sanitaryware and has forayed into the home appliances segment which contributes 19% of revenues. It also made an unsuccessful diversification of its business into home decor, which is loss-making since its inception in 2012. Whether the company continues operation in this segment in the future remains to be seen. 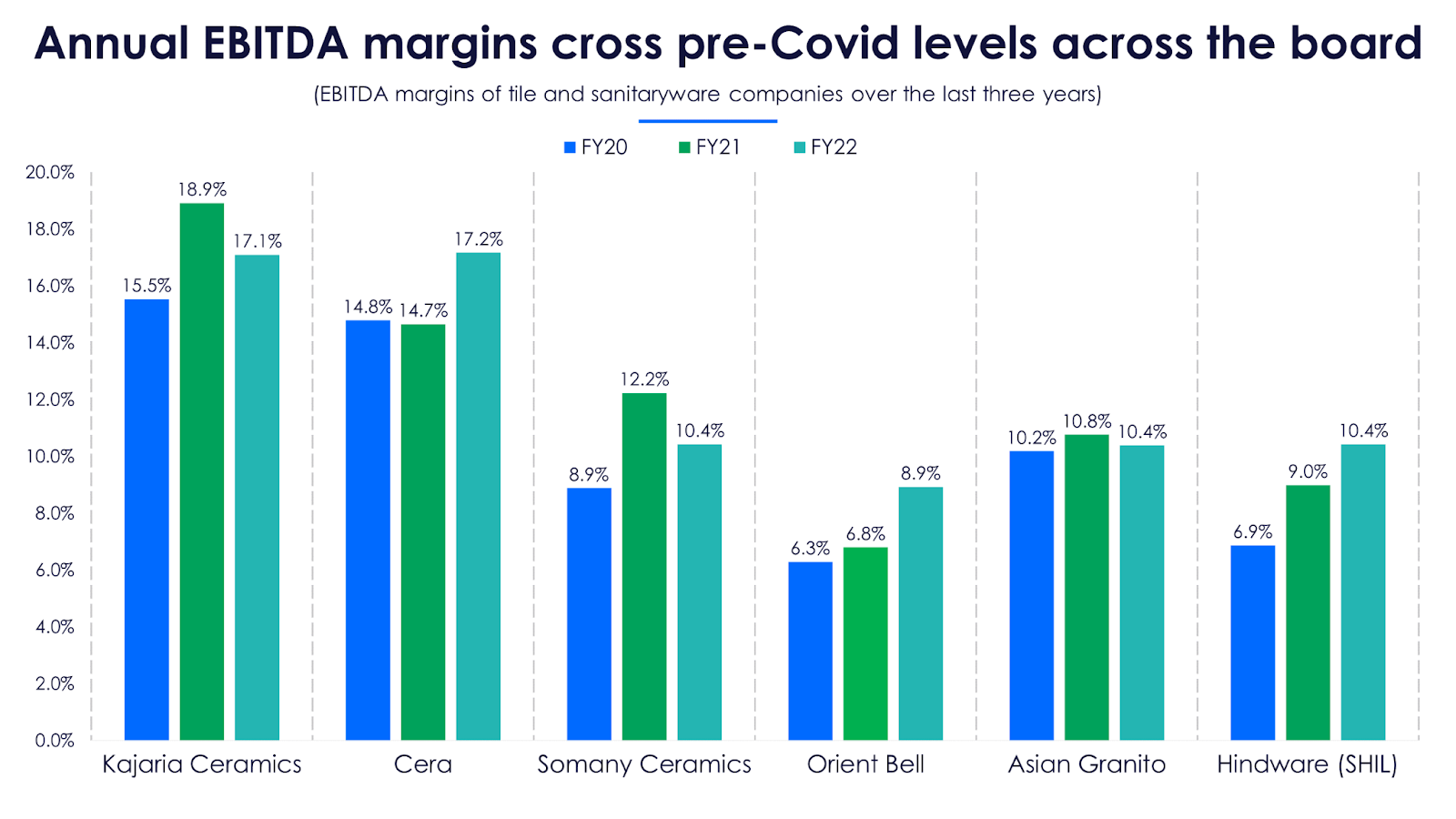 Industry growth is not without its challenges

This didn’t last long as prices started rising during the second half of FY21. Gujarat Gas provides gas to ceramic industry players in the Morbi district. In October 2021, Gujarat Gas announced an increase of Rs 9.5/scm in industrial gas price (up 24%) which resulted in an increase of Rs 47 per scm cost to the tile manufacturers. The manufacturers were able to pass on the increase in gas prices to customers and sustain their margins. However, the high gas prices are still a matter of concern.

In the short term, non-Morbi manufacturers like Kajaria and Somany are likely to be more competitive as RasGas used by these manufacturers in some of their manufacturing facilities is slightly more economical. However, despite these challenges, players have found ways to improve their revenues as well as protect margins. Most players are planning to expand their production facilities over the next few years.

The outlook for FY23 looks promising though a few factors may play spoilsport. The elevated gas prices are still a matter of concern for all the Morbi-based manufacturers. Astral declared its intent to enter the sanitaryware segment, and some SMEs in Morbi may build brands that eat into the market share of the established players. With the recovery in the real estate industry and rapid growth in hotels and commercial spaces, the demand for tiles and sanitaryware is bound to keep rising. Whether the leader maintains its position or the entry of new players eats into market share,, this industry is a must-watch for investors.