The IPO season is chugging along, and we have another initial public offering on our plate in Star Health and Allied Insurance Co, backed by Superstar investor Rakesh Jhunjhunwala. The company is a retail-focused health insurance company and the largest private-sector pure-play health insurance firm in …

Switch to an annual plan at a reduced price

The IPO season is chugging along, and we have another initial public offering on our plate in Star Health and Allied Insurance Co, backed by Superstar investor Rakesh Jhunjhunwala. The company is a retail-focused health insurance company and the largest private-sector pure-play health insurance firm in India (out of five) based on gross written premium. 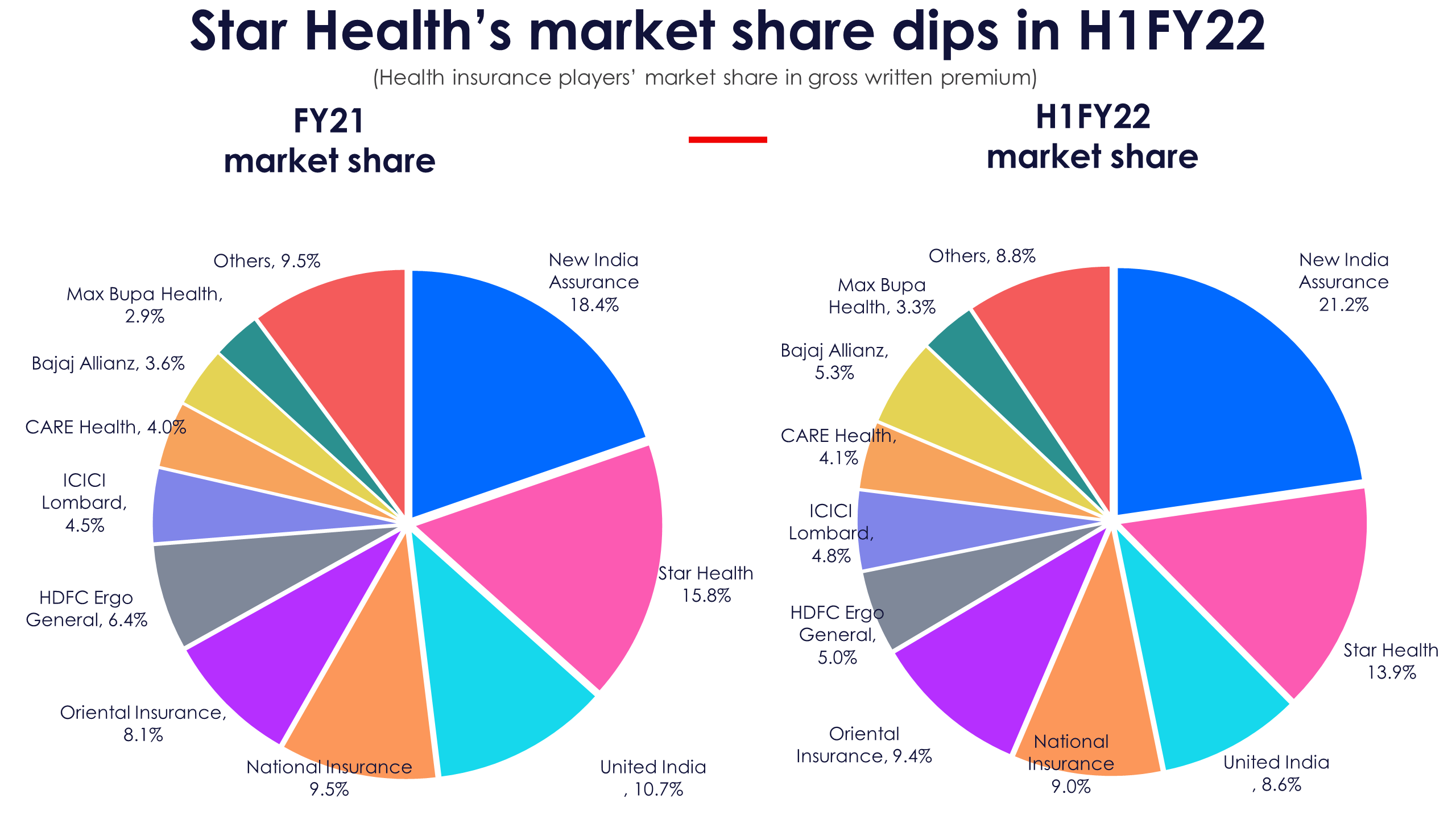 The issue size is up to Rs 7,250 crore, consisting of a fresh issue of shares of up to Rs 2,000 crore. Jhunjhunwala isn’t selling any of his shares, while other promoters and shareholders will sell some shares. After the IPO, the promoter holding in the company will fall to 55.10% from 62.75%.

The price band for the issue is set at Rs 870-900. The proceeds of the fresh issue will be used to augment its capital base and its solvency levels.

Forget whether this IPO is expensive or not. Considering it is backed by Jhunjhunwala, there is certainly going to be some appetite for it when it opens today. But at these prices, is this IPO worth your while?

One factor that works in favour of Star Health is its large agent and branch network. The company got nearly 79% of its gross written premium from individual agents in FY21. It also has one of the largest health insurance hospital networks in India of 11,778 as of September 30, 2021. It has pre-agreed arrangements with nearly 66% of these hospitals in this network. Its branches stretch through 25 states and five union territories.

As the pandemic unfolded, the importance of health insurance became clear to many people. This also meant that there were many claims filed over the past 18 months due to Covid-19. The company spent nearly Rs 1,814.5 crore in claims due to Covid-19 in FY21 and this has already touched around Rs 1,639 crore in H1FY22. The claims ratio (net incurred claims divided by net earned premium) gives a better picture of how the business changed over the past 18-21 months. 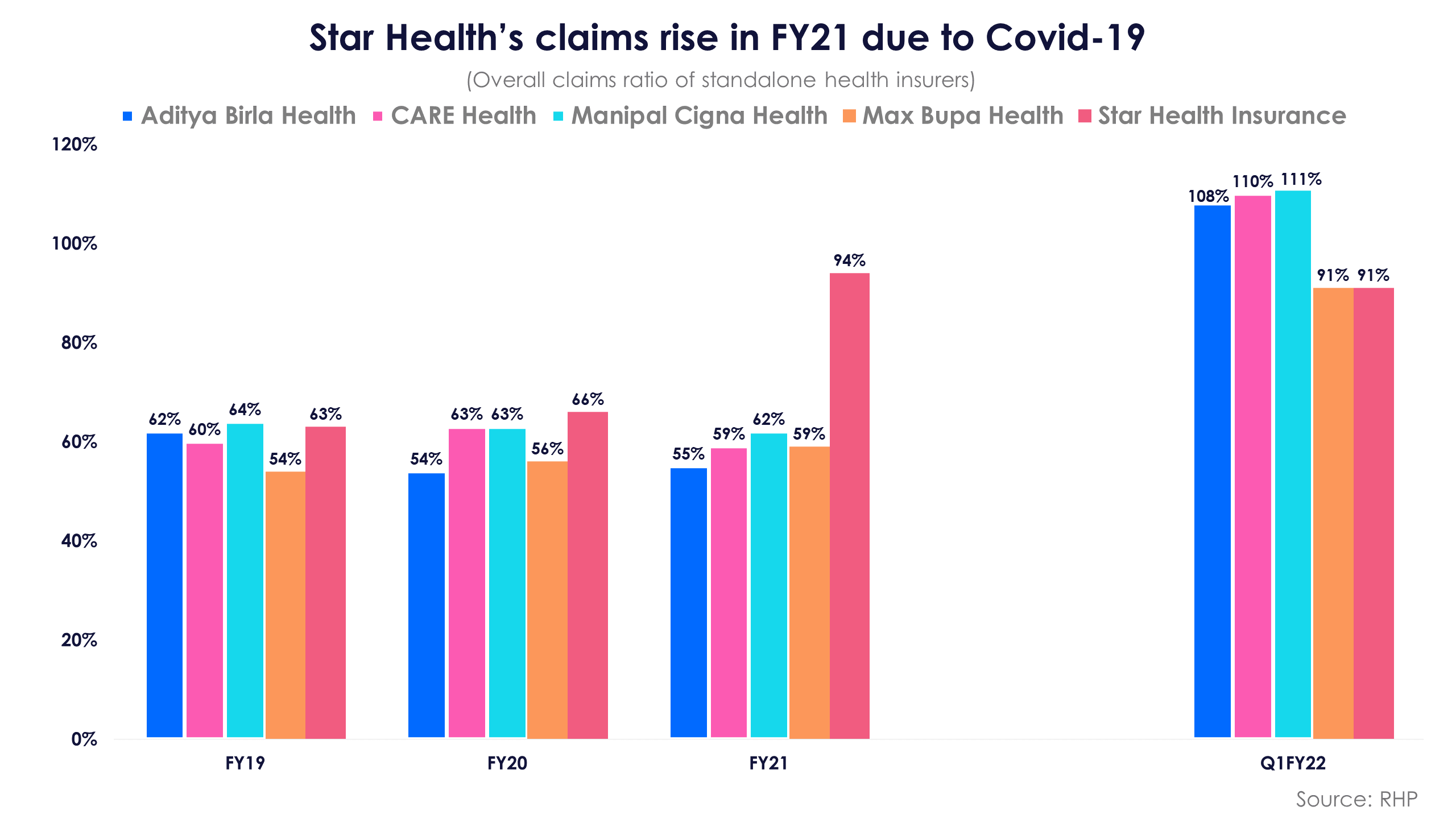 The retail focus of the company probably led to this huge spike in claims in FY21. Some of its pure-play health insurance peers also saw their claims ratio rise beyond 100% in Q1FY22, which doesn’t bode well, but Star Health’s claim ratio was below 100%.

In FY21, due to lockdowns and the Covid-19 scare across India, many people didn’t go for hospitalisation or elective procedures that were non-Covid-19 related. This meant that the company posted a net profit in H1FY21 compared to a loss in H1FY22 when the spike in Covid-19 cases during the second wave saw a huge rise in claims paid out. 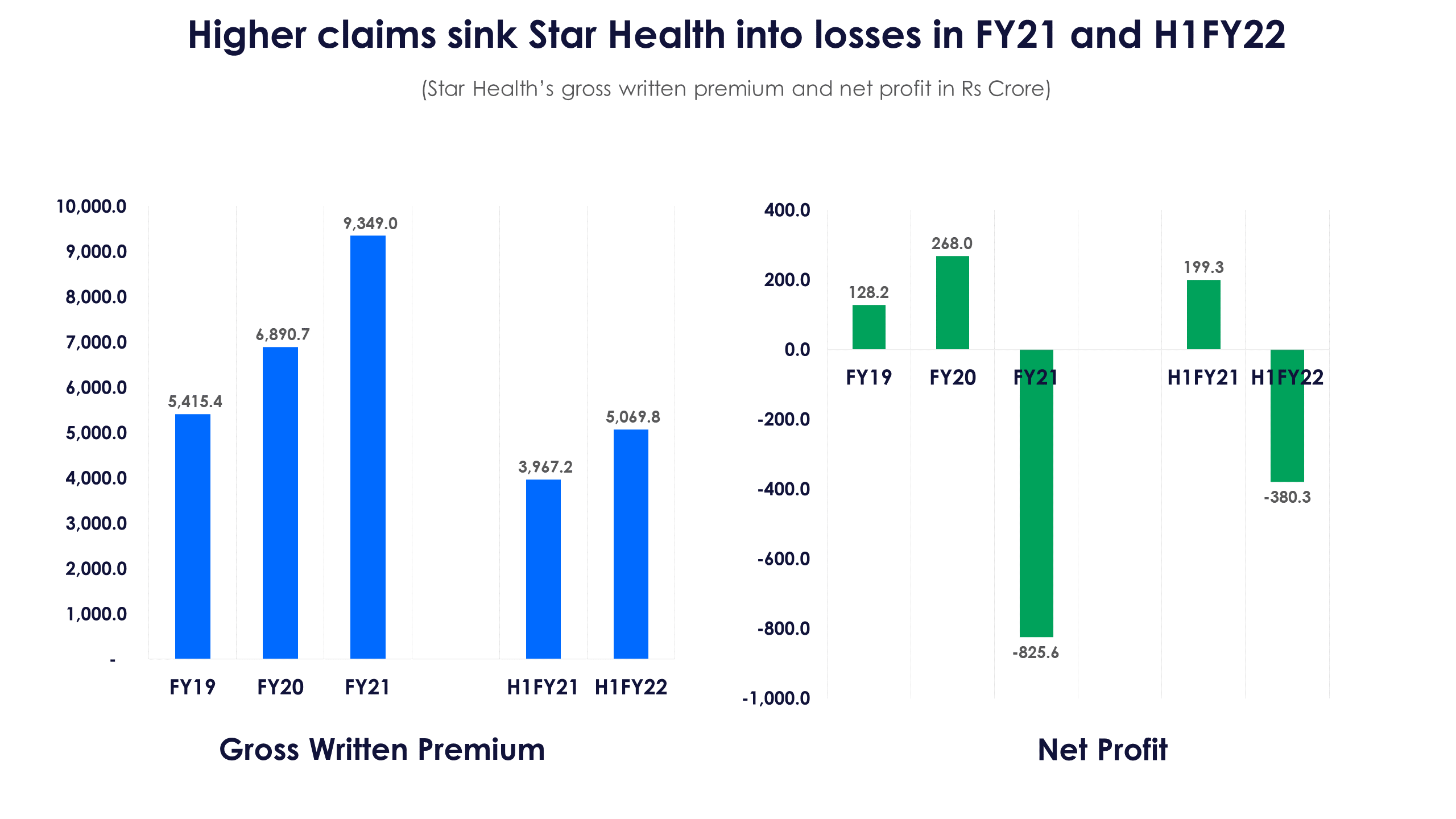 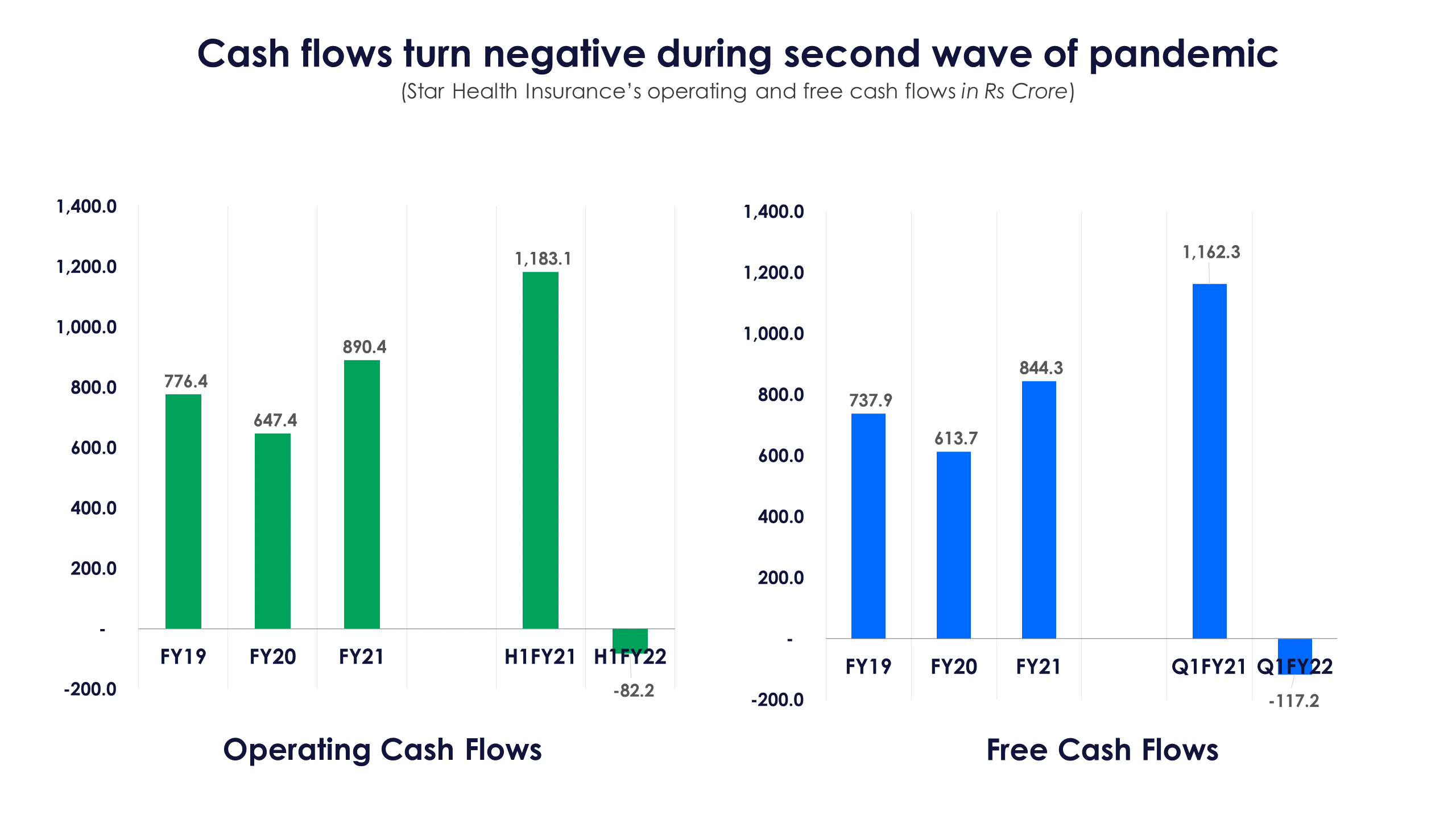 The higher claims also hit the company’s efficiency in underwriting claims, with its combined ratio (claims incurred + expenses as a proportion of premiums received) being higher than 100%. This means that the company was paying out more than what it is getting into the business.

This means that the company wasn’t making an underwriting profit during this period. 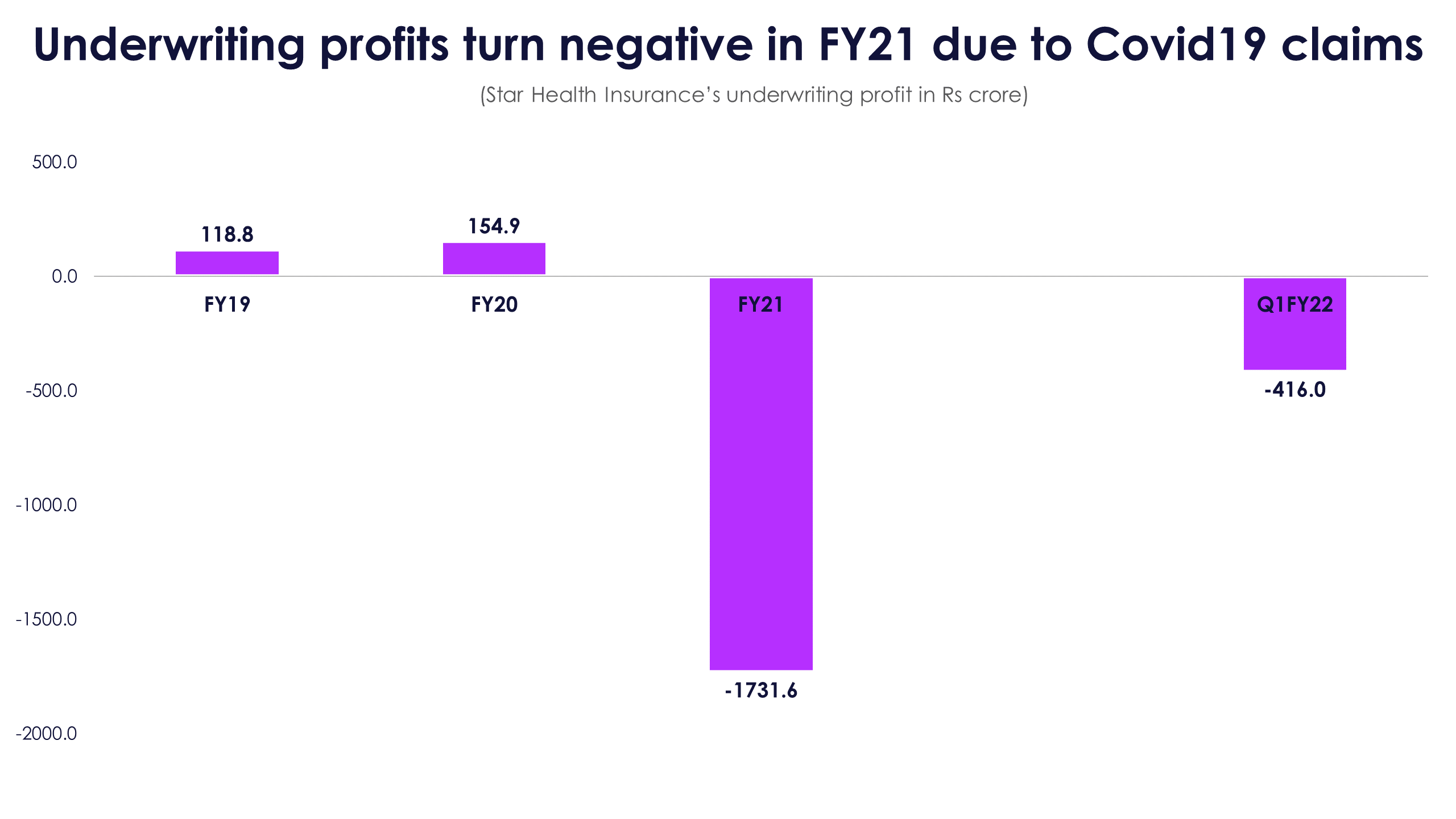 Higher claims paid also hit the company’s solvency ratio. Solvency ratios show whether the company has enough funds to pay its liabilities. The company will use the proceeds of the fresh issue from the IPO to shore up its capital base. Regulations need the company to maintain a solvency ratio of at least 1.5 times. 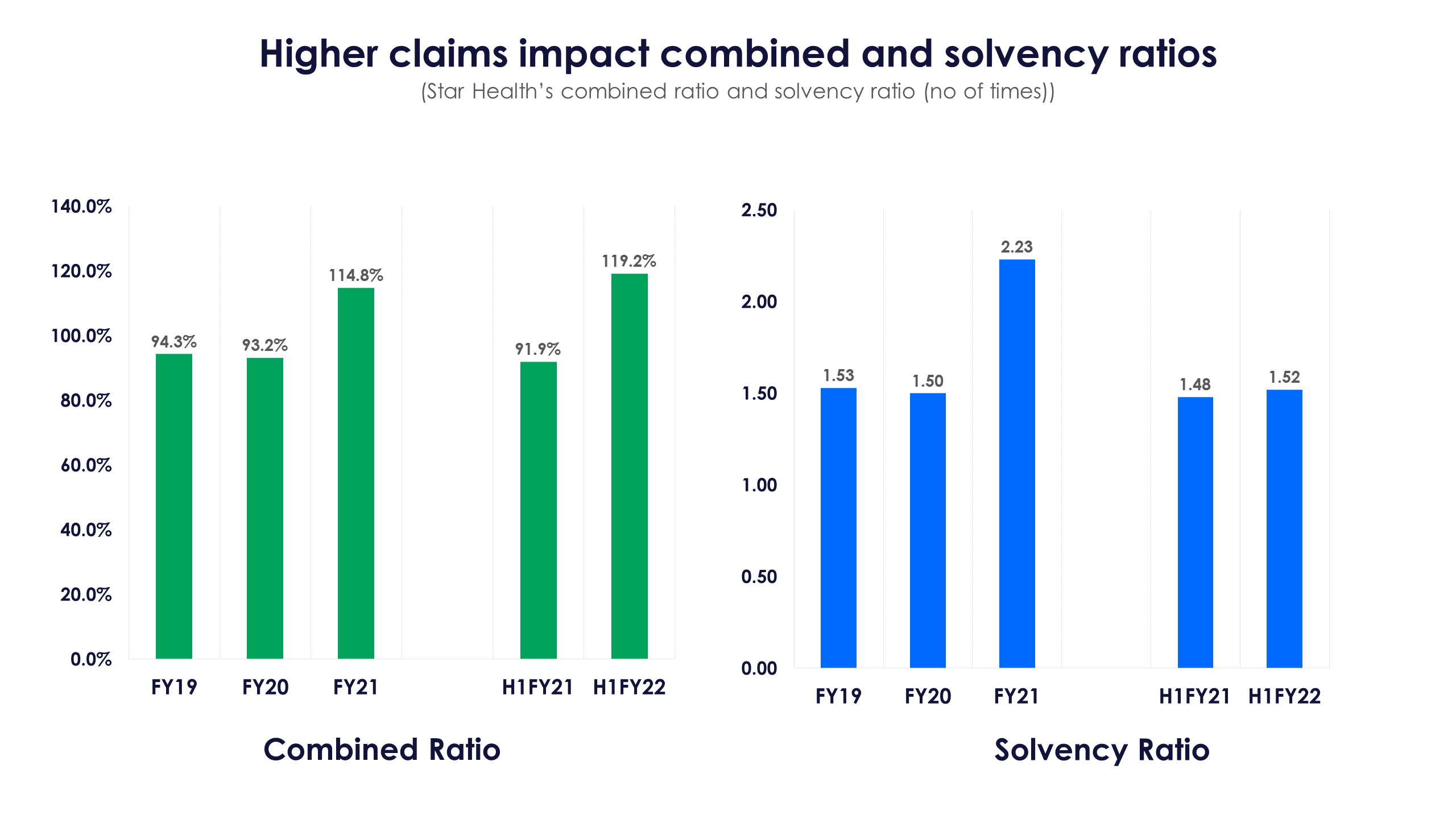 Based on previous large deals in the pure-play health insurance space, this company is definitely richly valued but has a significant market share in its space. This high market share will probably pique some investor interest in this IPO. The fact that the company doesn't have any listed peer might just work in its favour in terms of valuation.