The volatile markets are set to welcome another company launching its initial public offering (IPO). Heranba Industries is the eighth company to enter the public markets in 2021.

Heranba Industries, a Gujarat-based agrochemical family business, is opening its doors to outside investment for the first time. The company makes crop-protection chemicals which it sells in India and over 60 countries.

With low market valuations compared to peers, an export focus, and a market leader position within an agrochemical niche, Heranba Industries is positioned as a strong bet in a growing industry.

This is Heranba Industries’ second attempt to go public. The agrochemical company first filed for an IPO in September 2019 and received approval from SEBI in February 2019. Due to unfavorable market conditions following the 2019 national elections, it delayed its public listing. In October 2020, right when the market began its rally and foreign institutional money began flowing in, several companies filed IPO papers. Heranba Industries was among them.

Heranba Industries’ promoters are the Shetty brothers - Sadashiv Shetty and Raghuram Shetty, who started the company in 1994 and directly hold 68% of the company. The rest of the stake is held by the promoters’ immediate family members and SAMS Industries, a group company. Heranba Industries does not have any other investors.

The issue comprises an offer for sale (OFS) of 90 lakh shares by the promoters and a fresh issue of 9.6 lakh shares. At the upper end of the Rs 625-627 price band, the OFS will fetch Rs 565 crore to the selling shareholders, and Rs 60 crore from the fresh issue.

Post the IPO, the Shetty Brothers will decrease their stake to 48% from 68%. The promoter group will collectively hold just over 75% of the company and the public will hold 24.9%. This is in line with SEBI minimum public shareholding norms (MPS), which states that promoters cannot hold more than 75% stake in the company.

Heranba Industries’ earnings per share (EPS) for FY20 was Rs 25. Taking the upper price band of Rs 627 per share, and the EPS of FY20, it is valued at a price-to-earnings ratio of 27 times. This is relatively cheaper than its peers in the agrochemical industry. 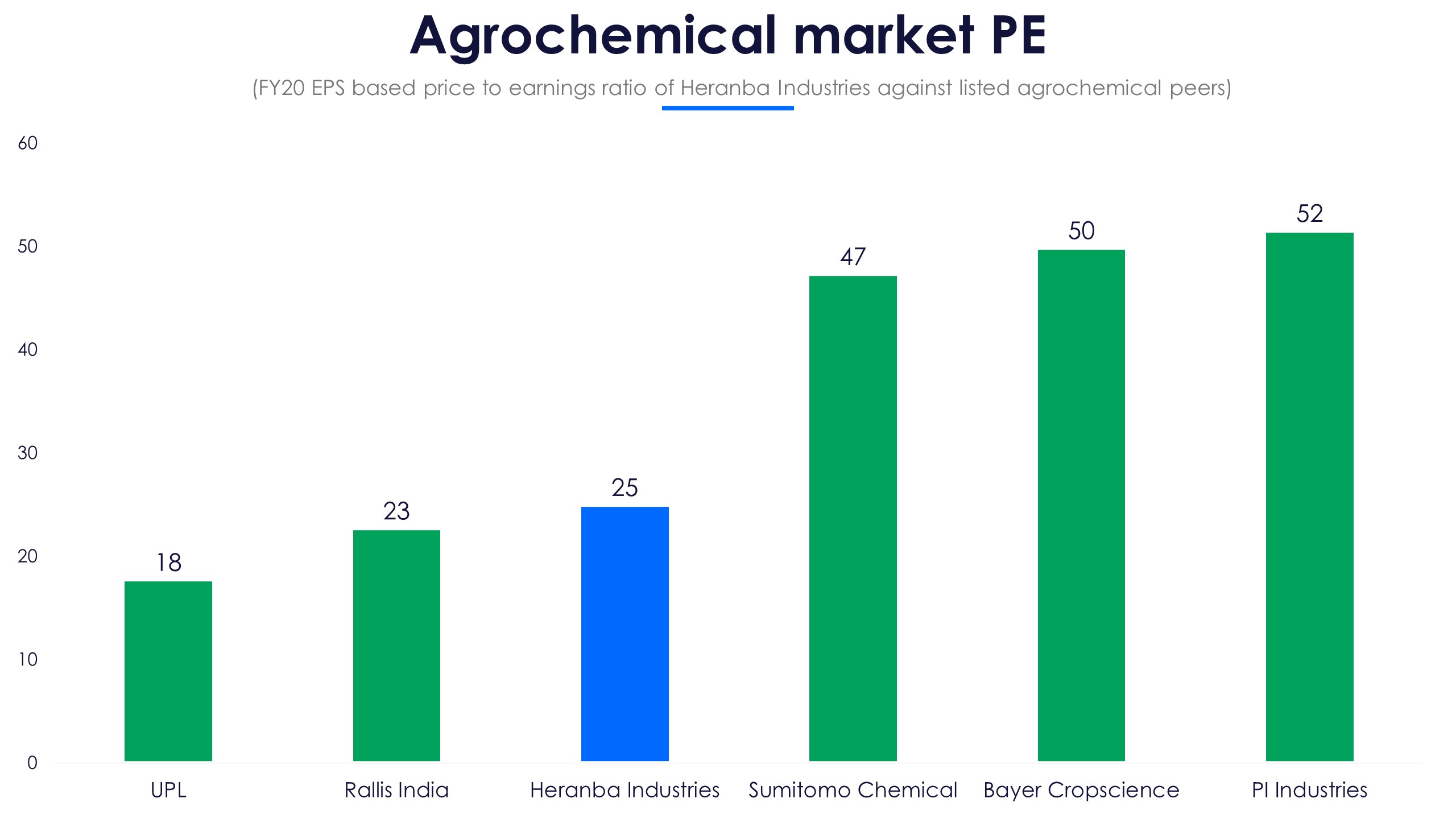 Heranba Industries manufactures crop protection products through the base agrochemical organic compound, pyrethroids. Its crop protection products come under technicals, intermediates, and formulations. Technicals are direct chemical compounds, whereas formulations are a combination of chemical compounds sold directly to farmers as pesticides, herbicides, and fungicides. Some of these formulations are marketed under the Heranba brand name. Under the branded formulations, the company also sells public health products like rat and mosquito kill in the domestic markets. 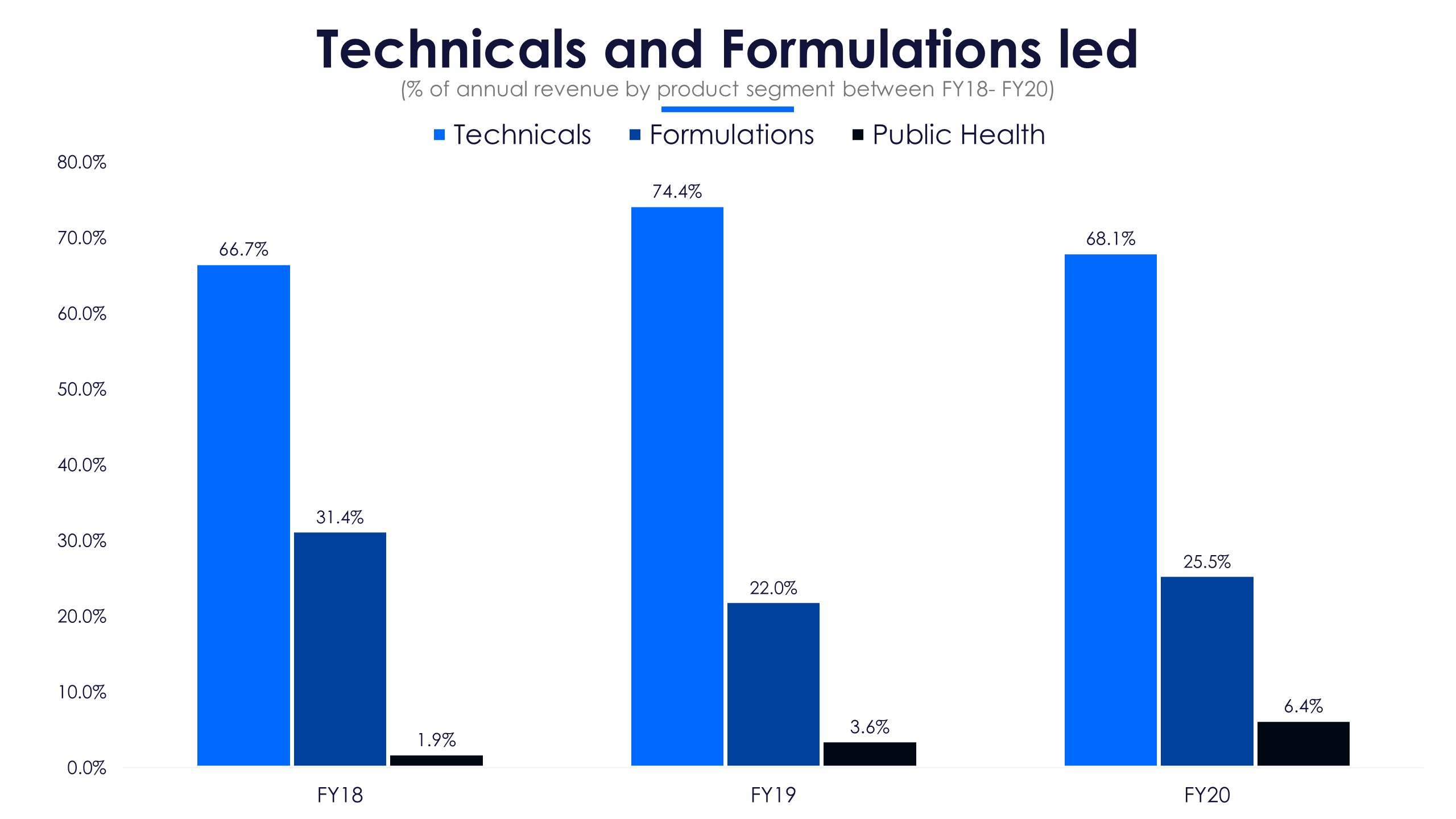 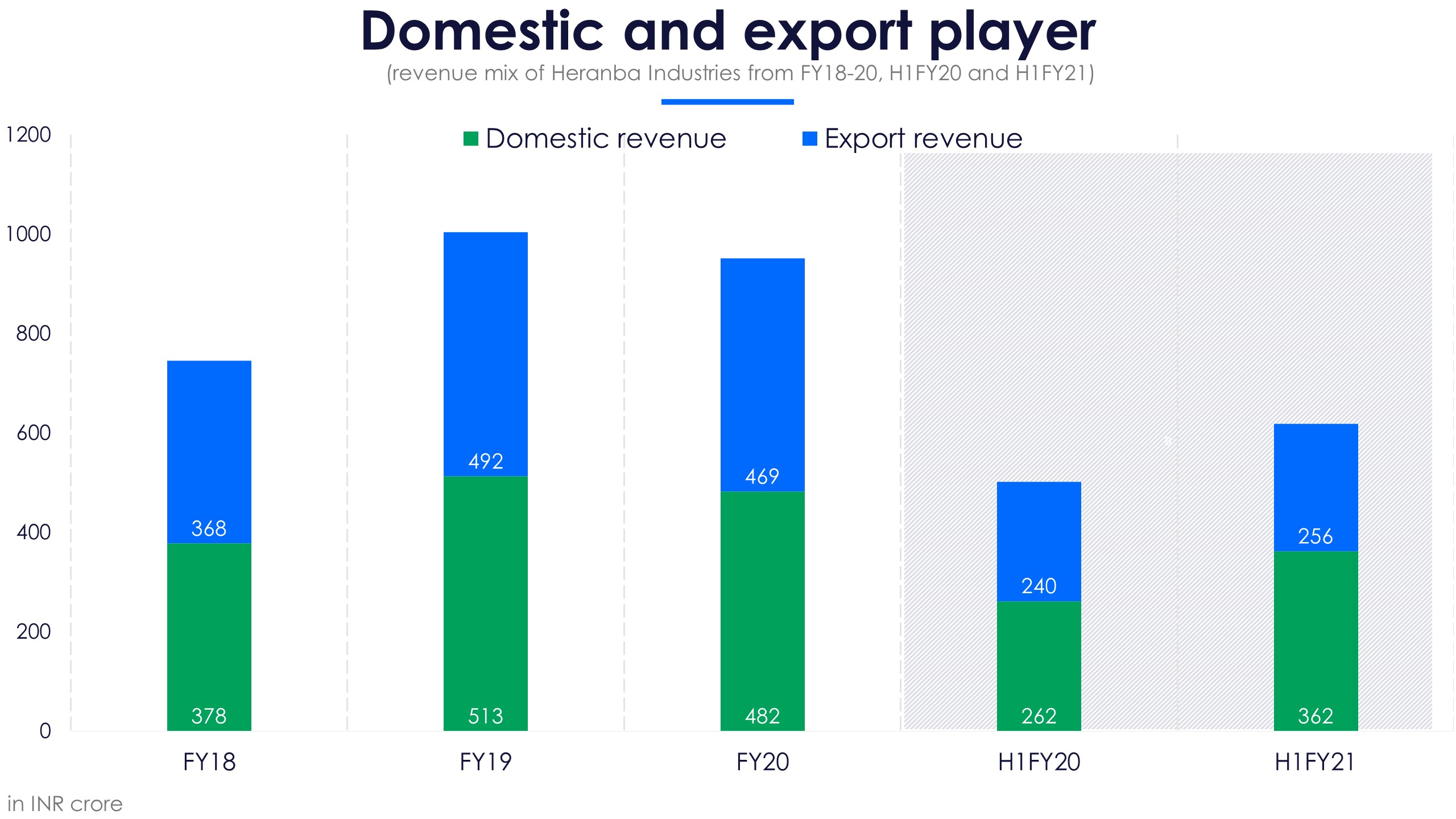 Heranba Industries' export dependence, especially to China, was emphasized in its FY20 revenue drop. While India enforced the lockdown in the last week of FY20, China, where the Covid-19 outbreak began, went into lockdown in January 2020. 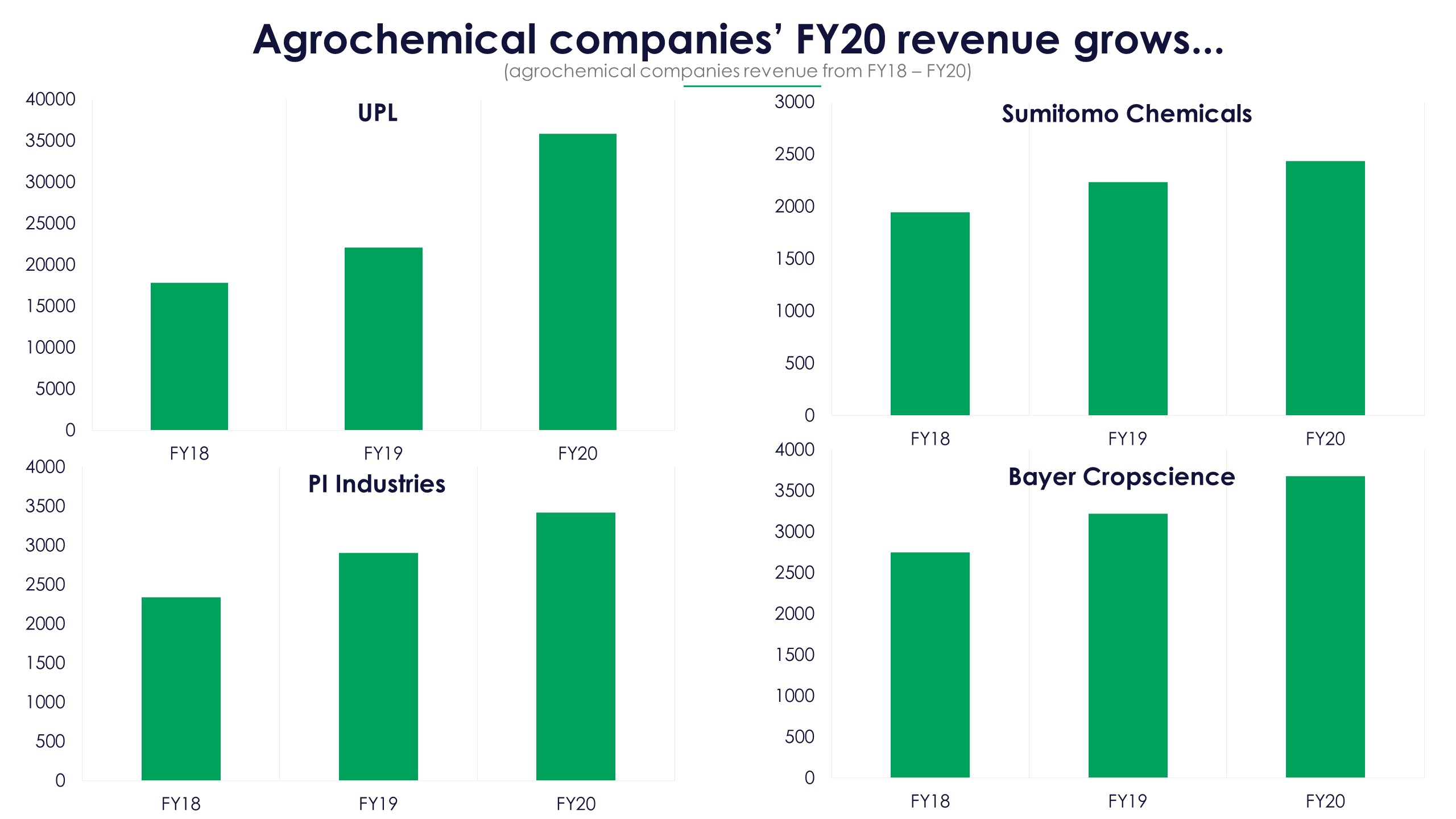 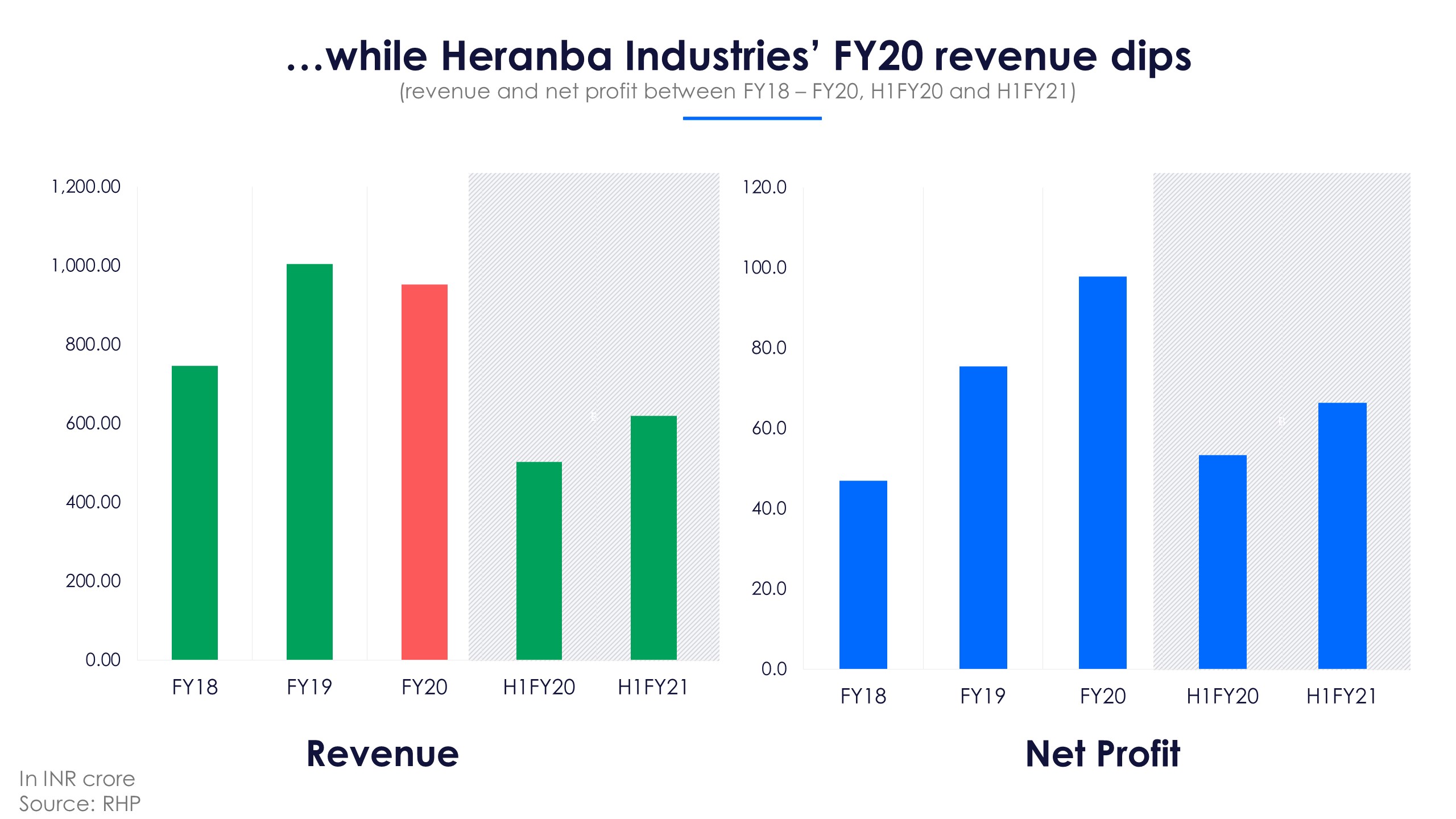 For the six months ended September 2020, Heranba Industries’ revenue was Rs 618 crore, a rise of 23% YoY. The management expects the FY21 revenue to reach Rs 1,200 crore (a 26% YoY increase) due to resurgent economic activity.

Here’s how Heranba Industries’ return on equity (RoE) measures up to the listed agrochemical space: 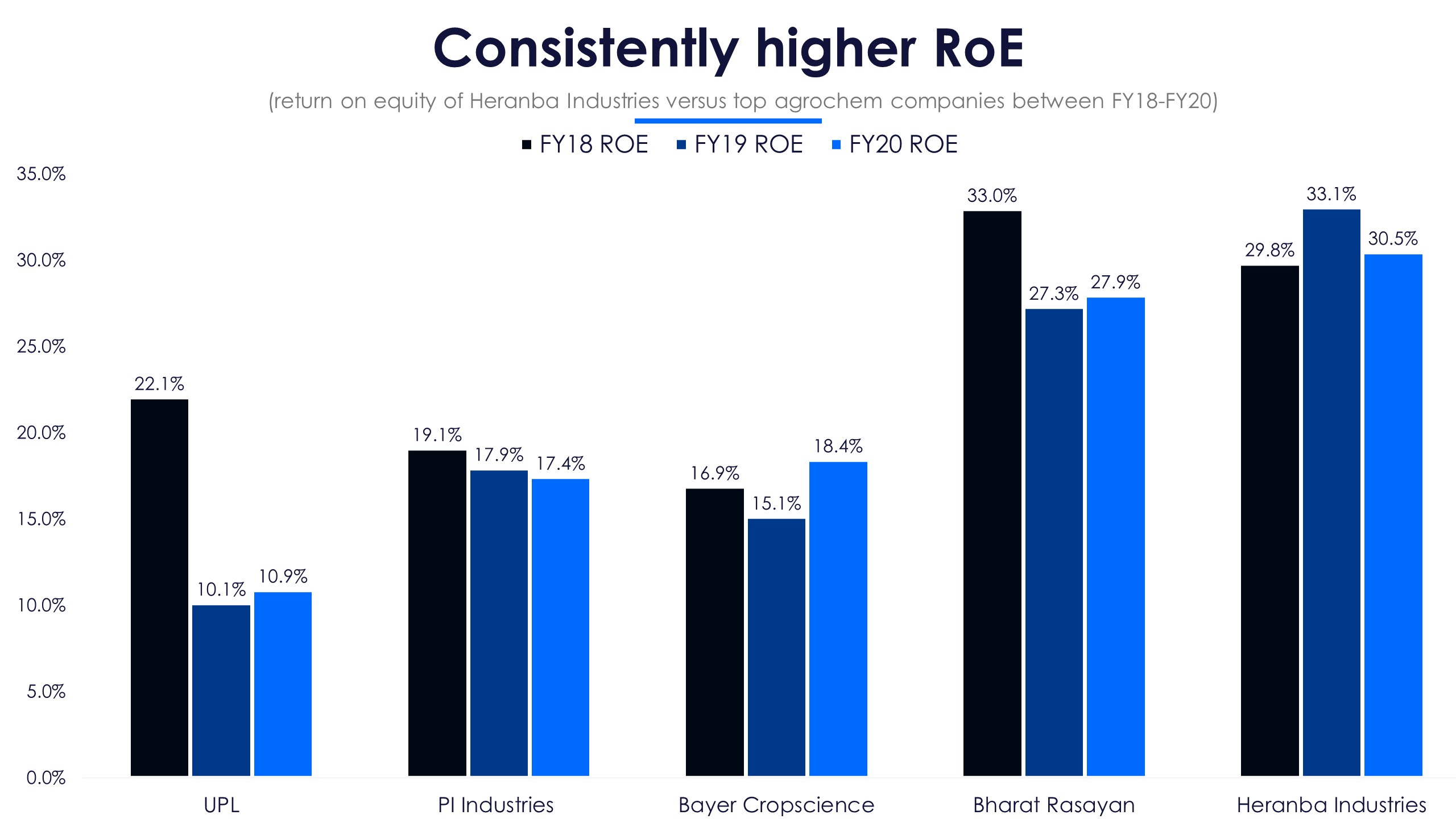 At the end of FY20, inventories were Rs 145 crore (30% of current assets, and 23% of total assets). This was a 27% increase on a YoY basis. This lowered the cash flow from operations for FY20 to Rs 54.2 crore, a 30% YoY decline. However, free cash flow for the year remained positive at Rs 14.4 crore. But this was its lowest free cash flows in the last three years. 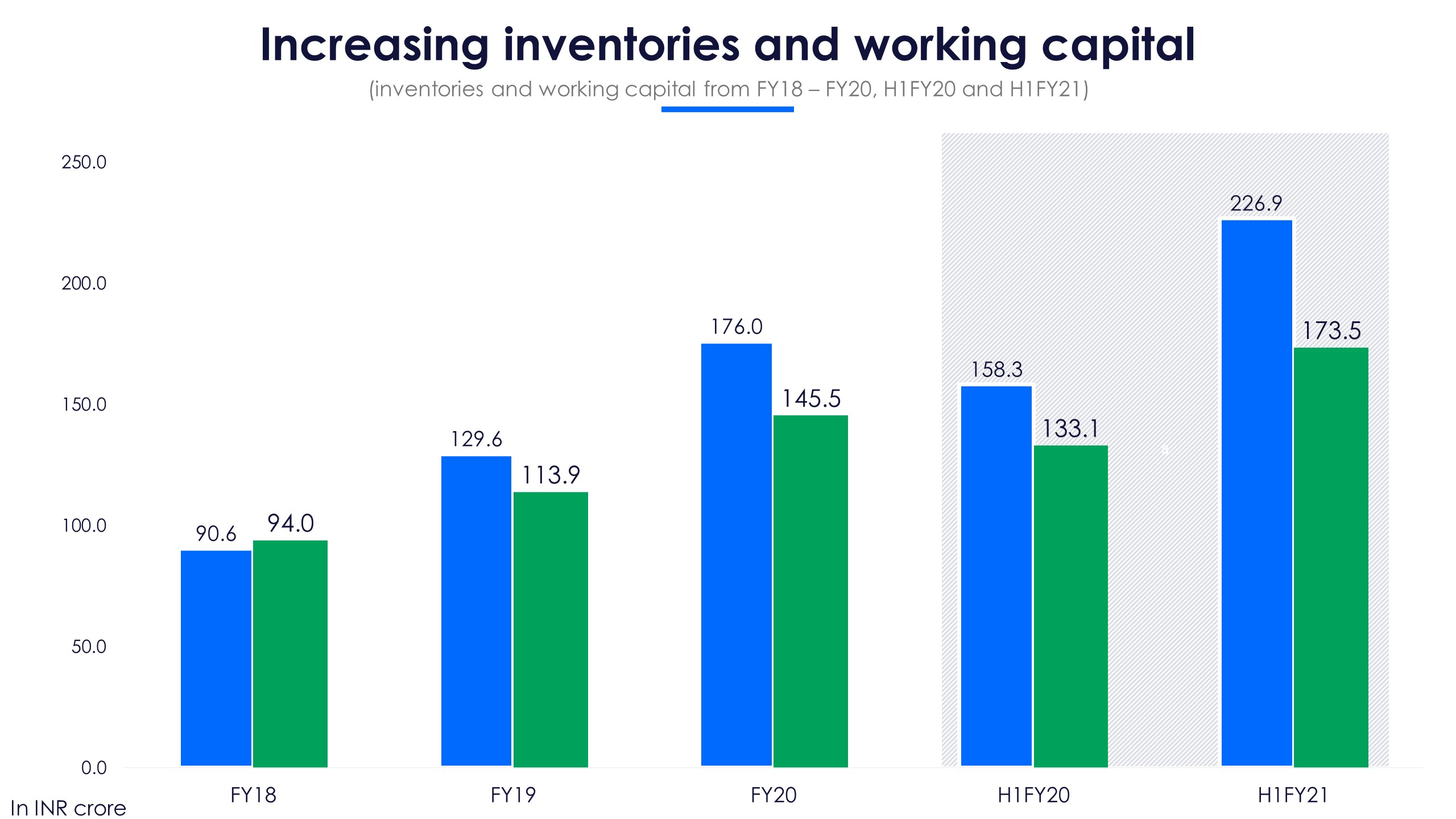 For the six months ended September 2019, Heranba Industries had a negative free cash flow. This was because it spent Rs 16.8 crore in capex. In H1FY21, Heranba Industries lowered the capex to Rs 7.3 crore. In addition to this, the management is looking to spend Rs 50-60 crore to expand its Sarigam facility in FY21. This is in line with the guidance of a Rs 150 crore capex for the next 2-3 years. This will be funded through internal accruals and not through the proceeds of the fresh issue. 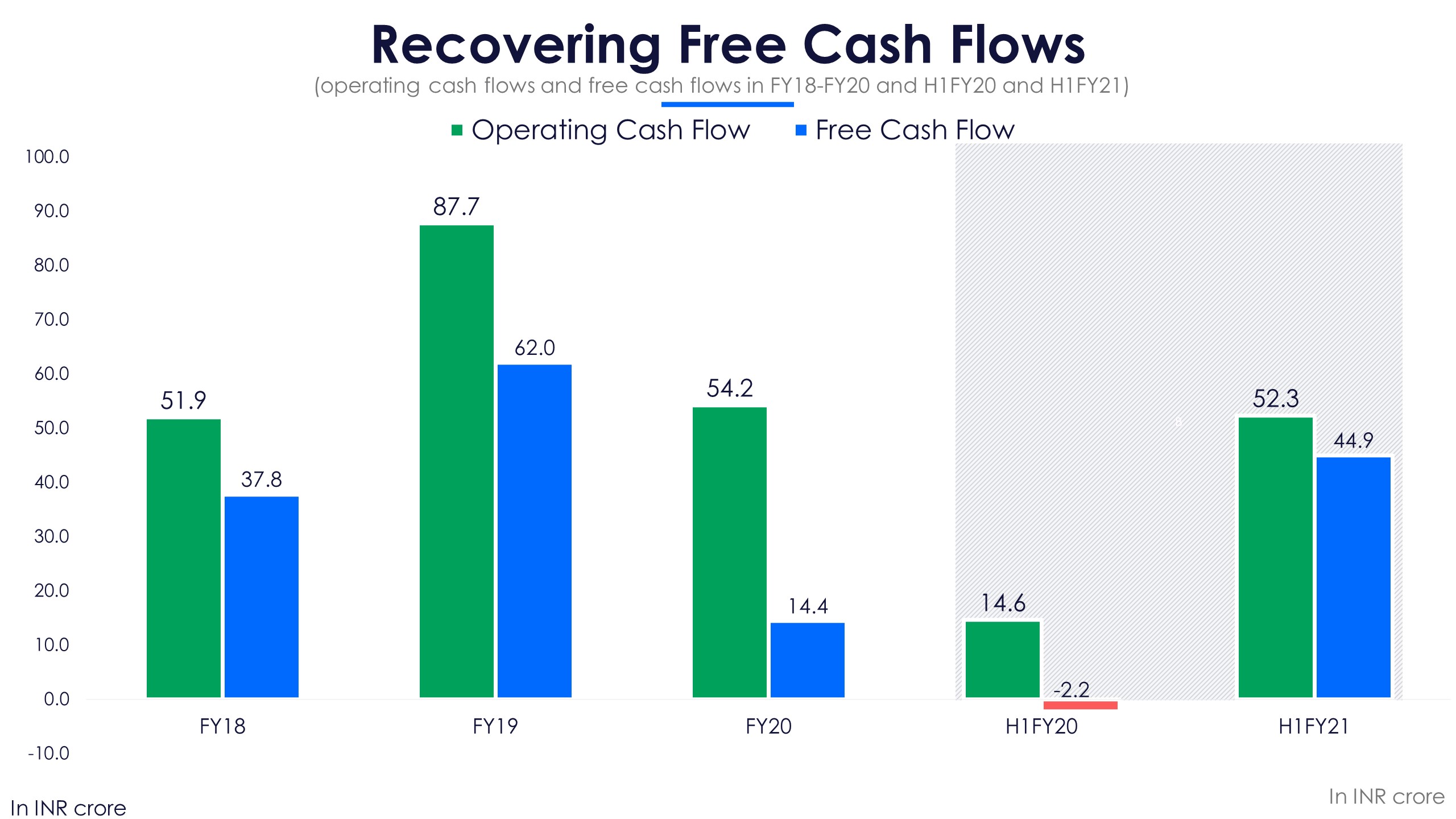 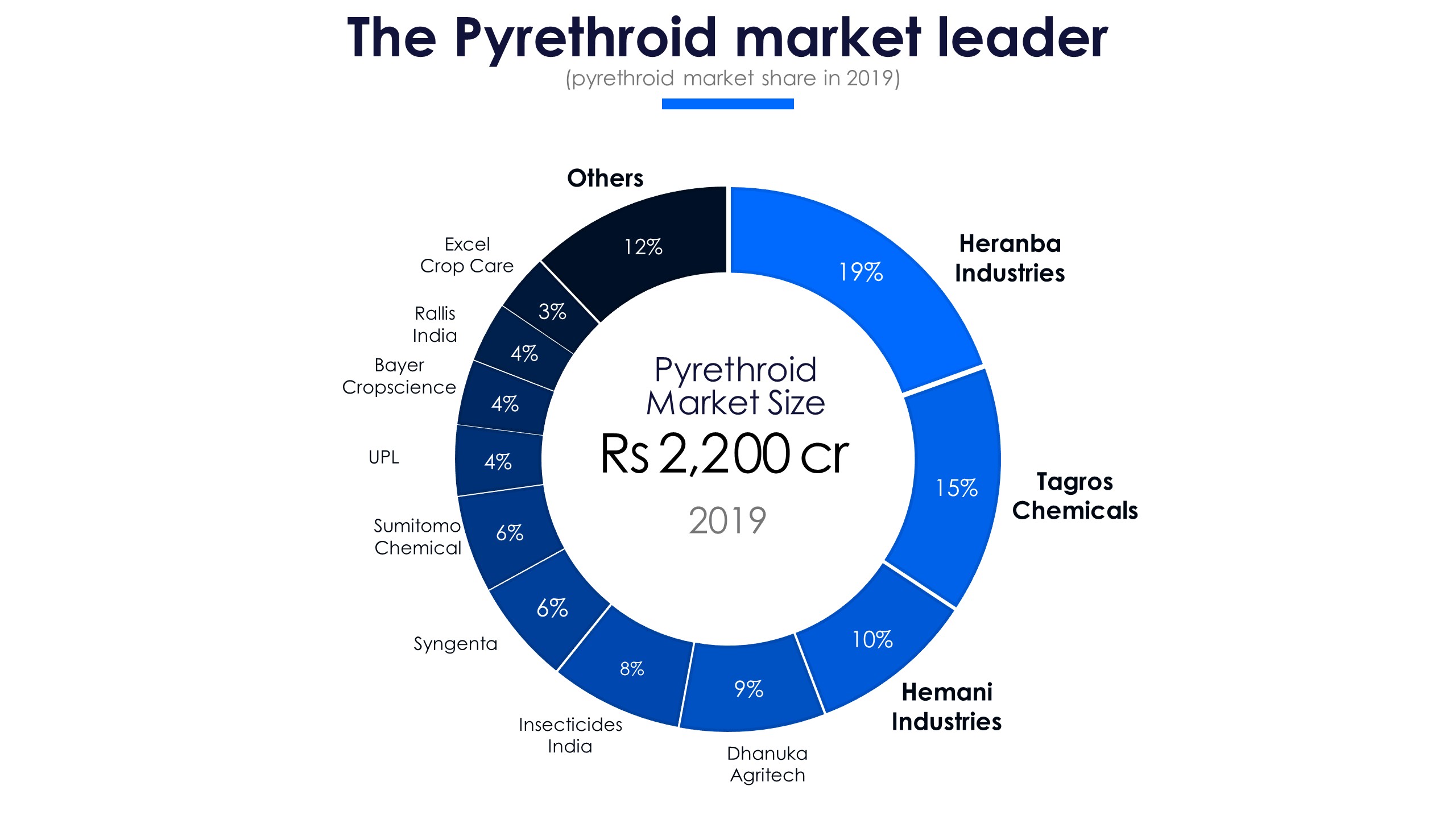 The domestic agrochemical space is promising, and Heranba Industries aptly poised. In 2020, the central government allocated Rs 2 lakh crore to 10 sectors as part of the production-linked incentive (PLI) scheme. This gave a boost to the domestic production of automobiles, pharmaceuticals, and textiles. Agrochemicals could be next in line.

This possible PLI boost could be a big catalyst for Heranba Industries considering its export focus. However, given how the export dependence hurt its FY20 revenue, it could be a double-edged sword for the company. China accounted for 14% of revenue, and 13% of raw materials import in FY20. If any further border tensions with China arise, Heranba Industries’ topline could suffer.

Even with the export dependency, its numbers look strong. Its cheap valuation relative to the industry, high return on equity, resilient cash flows, and pyrethroid market leadership make Heranba Industries a good choice for investors looking for a long-term play in the agrochemicals space.

Comment
2 Comments ,  2 Likes
pradeepb In comparison to UPL , it still looks costly. Do you still feel to subscribe and recommend this stock for long term.
22 Feb 2021  Like