This is the first initial public offering (IPO) of 2021. IRFC is a dedicated lender to the Indian Railways. The PSU under the MoR is registered as a non-banking financial company (NBFC). More specifically it is an infrastructure finance company under the Reserve Bank of India’s regulations. This makes IRFC the first government-owned NBFC to attempt an IPO.

IRFC is an NBFC like no other. It has only one customer - the Indian Railways.  As of FY20, over 76% of all rolling stock of the Indian Railways was financed by IRFC. But this dependency also makes it susceptible to many risks. Any changes in the debt structuring or lease agreements by the MoR can cause a shift in its business model (lease and loans collectively contribute over 95% of revenue). However, since it is operating in a restricted market, with a  low-risk business model, and posting strong financials, IRFC can be considered a safe bet.

The IPO will fuel additional lending

After the IPO, IRFC’s public shareholding will be 13.7%, and the MoR will hold 86.3%. On January 15, IRFC’s offering opened to anchor investors. It raised Rs 1,389 crore from 31 institutional investors. 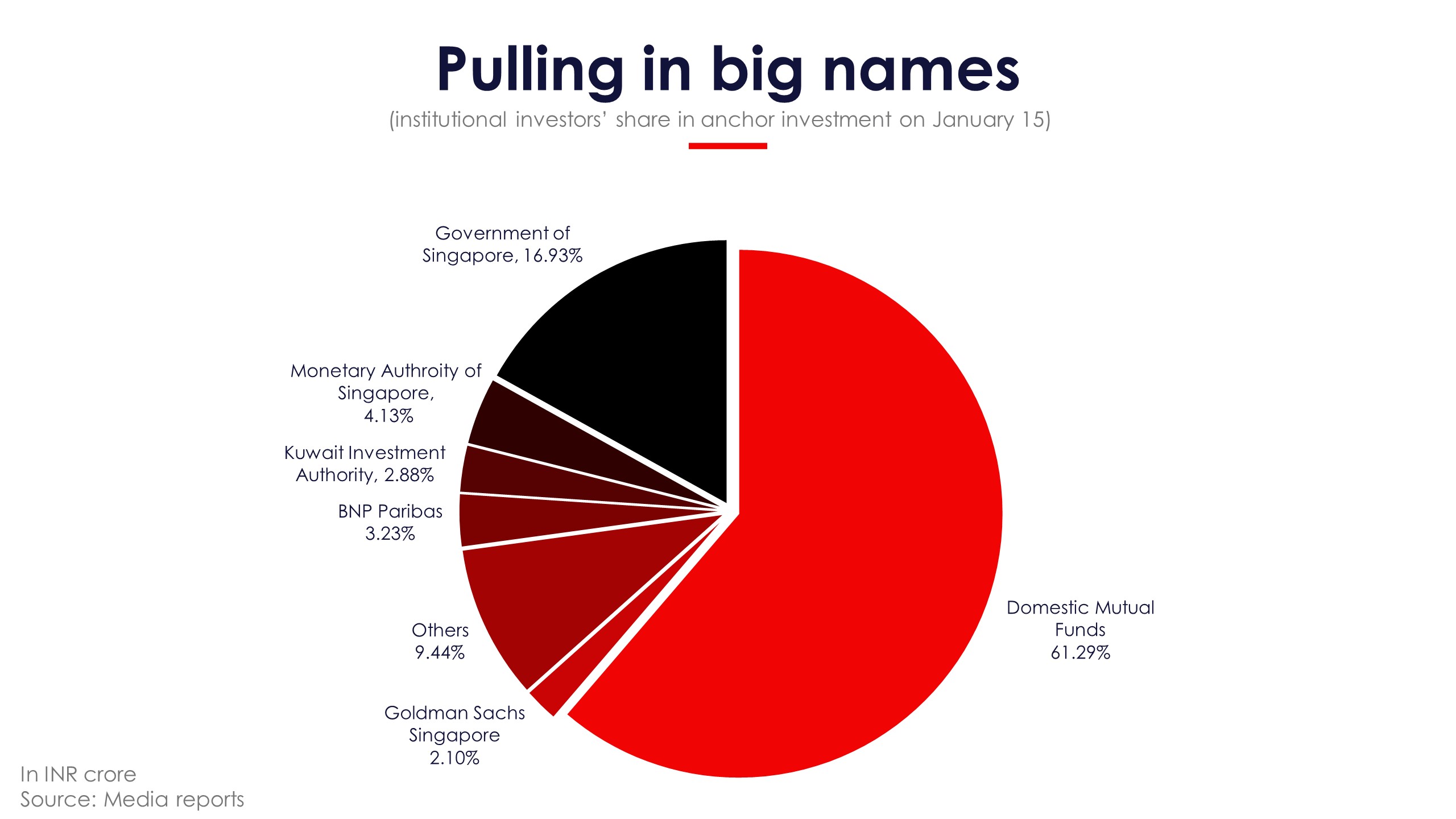 IRFC will use the proceeds from the fresh issue to provide increased liquidity to its equity capital base. This will be done to support future borrowing requirements as it expects the business to grow in the future. For the six months ended September 2020, it had issued loans worth Rs 6,240 crore, a 10.5% increase on a YoY basis. Between FY19 and FY20, its loan book increased by 9% to Rs 6,420 crore.

IRFC’s revenues come from two sources - leasing rolling stock to companies under the MoR and receiving interest on loans to these companies. Rolling stock refers to locomotives, wagons, coaches, cranes, and track machines. These are used in passenger and freight trains. In FY20, 76% of the Indian Railway’s rolling stock was financed by IRFC. However, this is down from 84% seen in FY19, and 93% in FY18.

In FY20, IRFC’s total assets under management (AUM) was Rs 2.6 lakh crore, a rise of 32.4% over the previous year. For the six months ended September 2020, AUM was Rs 2.7 lakh crore, a 25% rise on a YoY basis. IRFC’s AUM is divided between - leasing rolling stock, advancing loans to companies under the MoR, and advancing loans to other central PSUs under the Ministry of Railway like RailTel Corporation, the Container Corporation of India, etc. 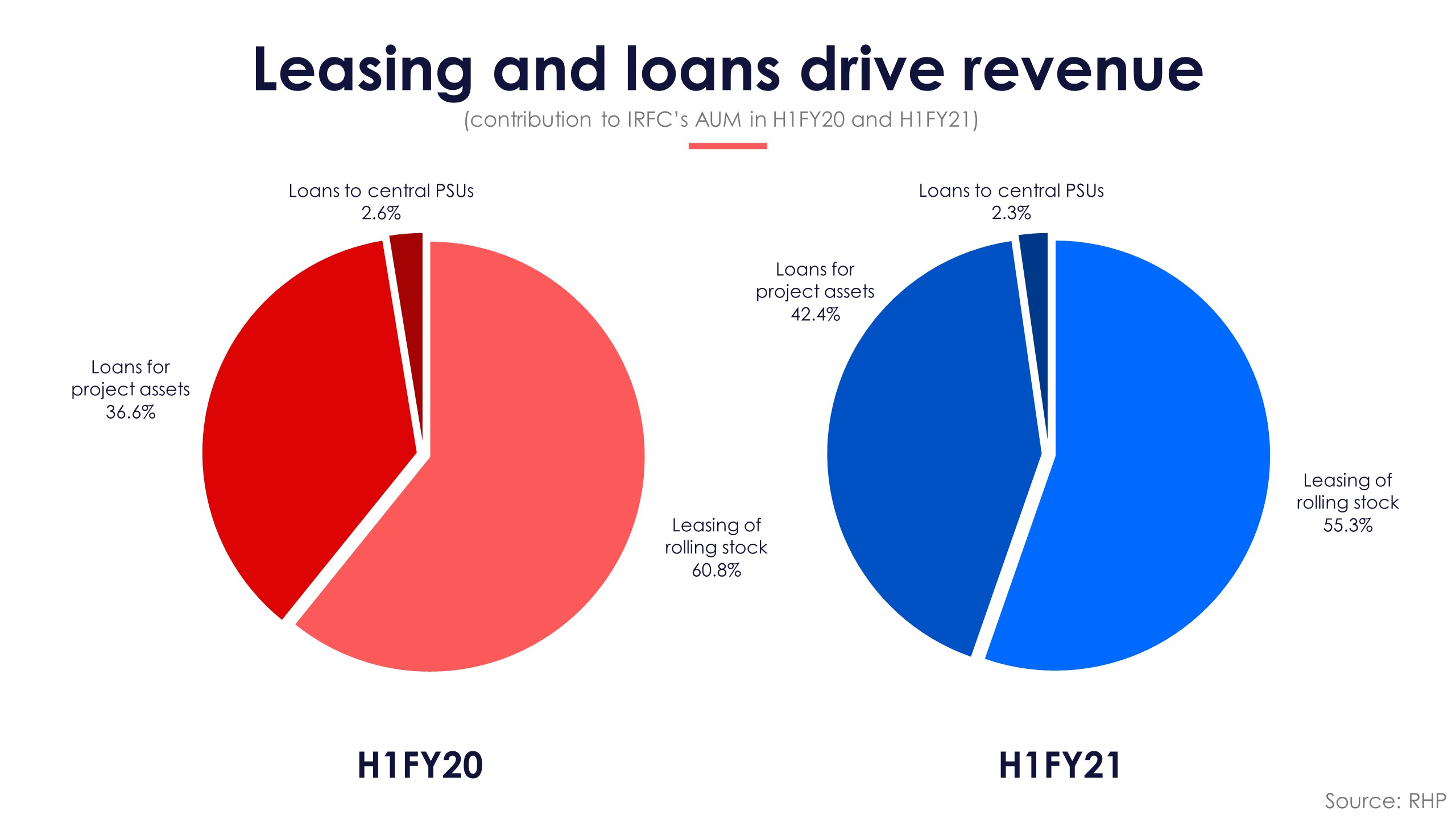 IRFC  gave out loans worth Rs 71,390 crore in FY20, up by 36% against the previous year. However, for the six months ended September 2020, less than Rs 20,000 crore in loans were disbursed, a 22% decline YoY. This was because the Indian Railways canceled passenger trains from March to June 30, decreasing its revenues, and was unable to finance interest payments to the lender.

Net interest income (NII), a key monitorable for banks and NBFCs, representing the difference between interest received and interest paid, was Rs 3,224 crore in FY20, a 16% rise on a YoY basis. For the six months ended September 2020, NII was Rs 1,932 crore, a 20% increase against the same period last year.

IRFC’s total borrowings as of March 2020 was Rs 2.2 lakh crores. Over 60% of this is from bonds issued in the Indian market, and 20% is from term loans from domestic banks. 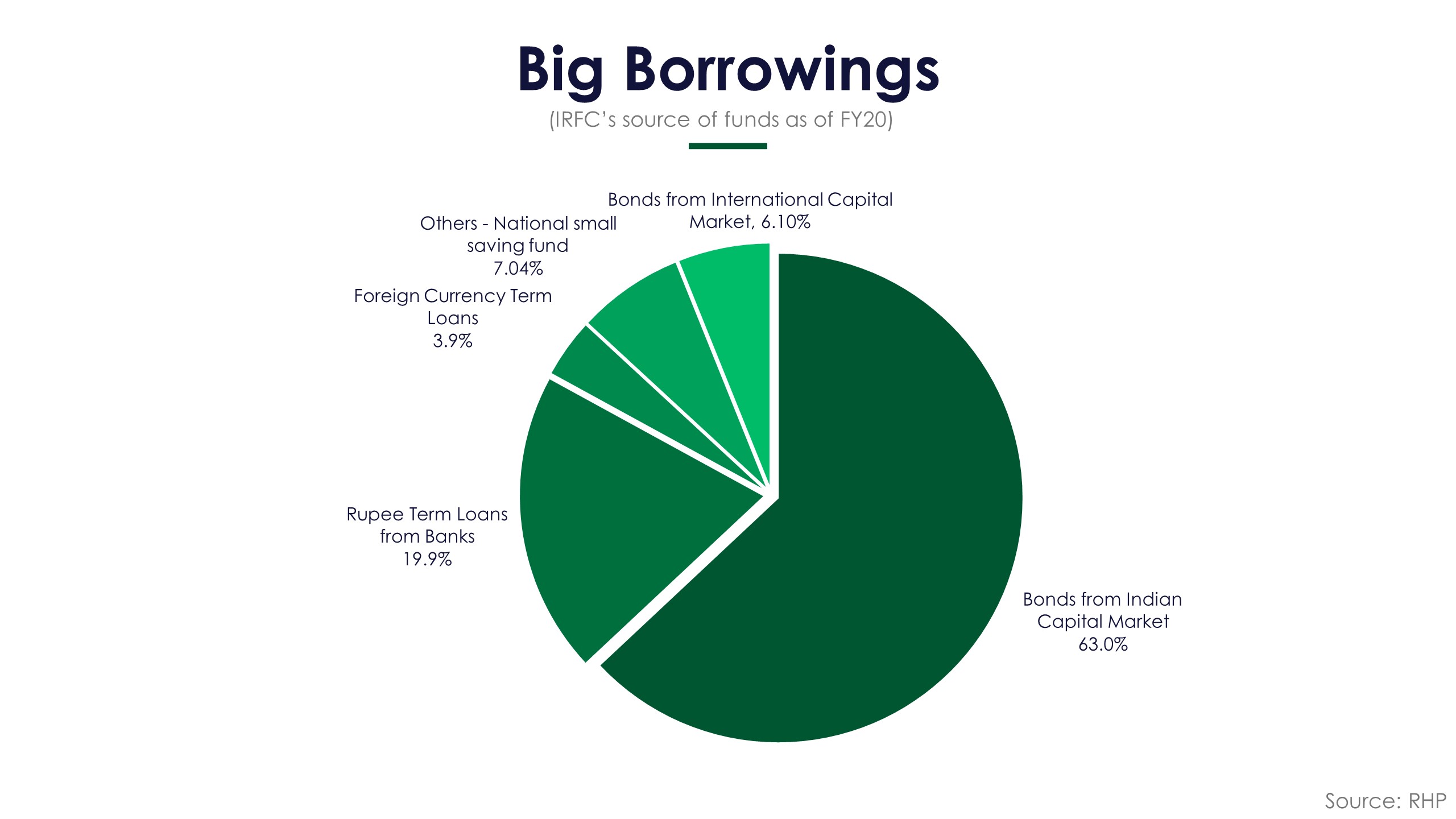 For the six months ended September 2020, total borrowings were Rs 2.4 lakh crore, an increase of 36% on a YoY basis. Its cost of borrowing on loans and bonds was an average of 7.2% at the end of March 2020. IRFC has received the highest possible rating by CRISIL of AAA rating on its long-term borrowing, and an A1+ on its short term borrowings. 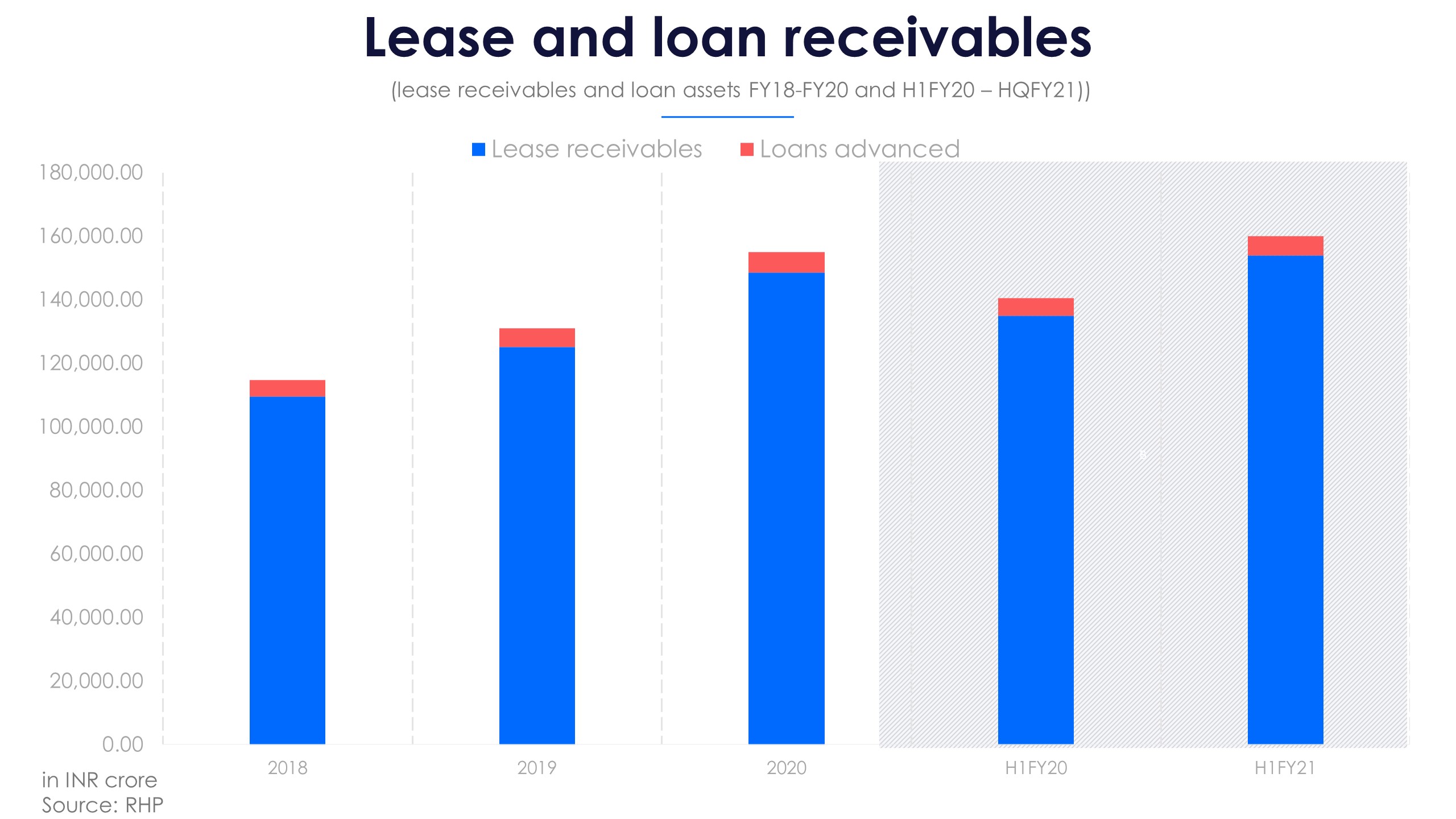 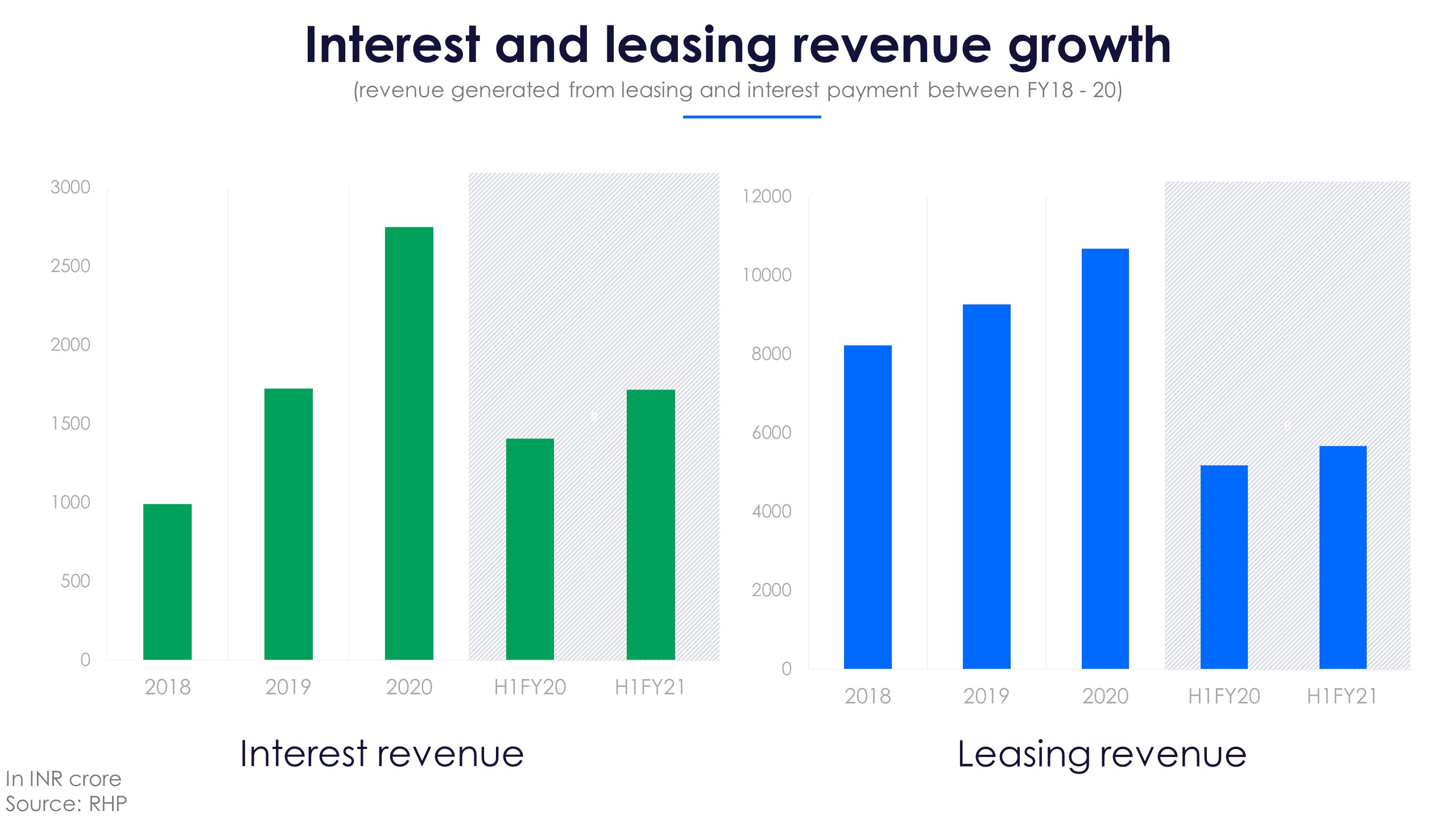 IRFC operates under the Indian Railways, Asia’s largest rail network. Its business is dependent on the railway network of the country which is expansive and largely uninterrupted.  Around 2.3 crore Indians were ferried via 13,500 passenger trains, and over 33 lakh tonnes were transported every day in FY19.

Indian Railways recorded Rs 1.9 lakh crore in revenue for FY19, a 6.2% rise against the previous year. Over 70% of the revenue came from freight traffic, and 30% from passengers ferried. IRFC leases out rolling stock for passenger and freight trains.

The capital expenditure (capex) for the Indian Railways between FY16 to FY20 was Rs 5.8 lakh crore, 46% lower than the estimate of Rs 8.5 lakh crore. Over 45%of this expenditure was dedicated to decongest and expand the railway network, and 12% was to add rolling stock, which is financed by IRFC.

In April 2020, the Indian Railways and Rail Vikas Nigam (RVNL) said it would borrow Rs 58,000 crore from IRFC in FY21. As of September 2020, various bodies under the MoR have borrowed Rs 3.5 lakh crore from IRFC, cumulatively, a rise of 6% since April 2020. Earlier this month the MoR stated that it would increase the borrowing amount for FY21 to Rs 62,500 crore.

With borrowings necessary to finance an expansive industry like the railways, and IRFC being the prime lender to the Indian Railways, the PSU can be considered a safe bet in the NBFC space.