Going public is seen as a desirable milestone for businesses, but for some, the lure of private profitability outweighs that of public funds and the scrutiny that comes with it. Some companies may go to any length to keep profits private. A case in point is Vedanta.

The mining giant, owned by mining baron Anil Agarwal, was looking to reverse its decision of going public and reacquire its public shareholding. However, the process to delist from exchanges turned out to be not as straightforward as it hoped, even if it had done so once before in 2018. With a low-ball offer from its minority shareholder, suppressed earnings, and a corporate simplification process gone wrong, it all came crashing down for Vedanta on October 12.

A delisting effort announced in May

Vedanta is a Rs. 36,000 crore mining company primarily in the extraction of zinc, iron ore, and aluminum. The company’s main shareholder is Indian billionaire Anil Agarwal, the chairman of Vedanta Resources (VRL), the London-based holding company which owns the main promoters of Vedanta. 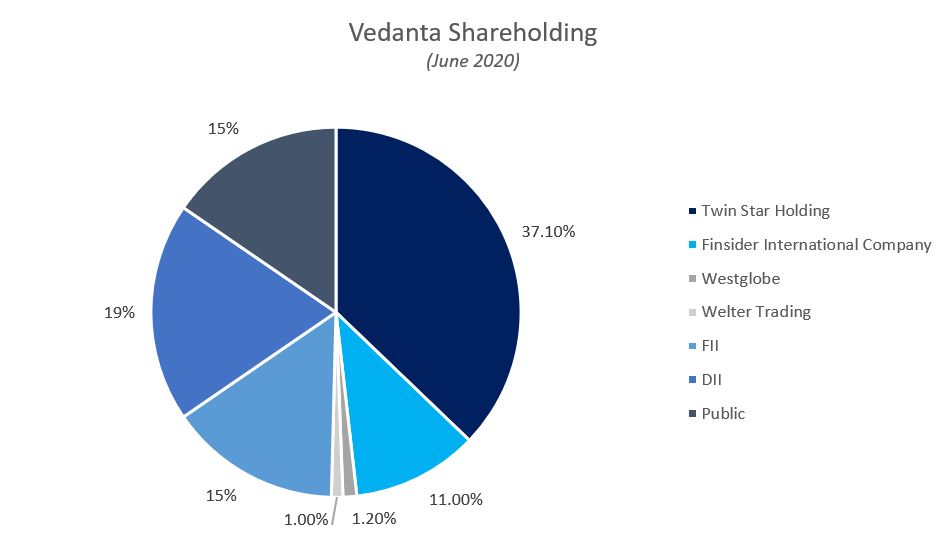 On May 12, Vedanta notified exchanges that it had received a letter from the main promoter Vedanta Resources stating that the latter wants to “either individually or along with one or more subsidiaries, acquire all fully paid-up equity shares of the Company.” This would result in Vedanta Resources increasing its stake in the company from 50.3% to 100%, and subsequently delisting from the NSE and the BSE. The notice added that if the Indian delisting is successful, the company would also seek to withdraw its public shareholding from the New York Stock Exchange (NYSE).

The letter stated that the offer price, at which VRL would accept the public’s equity shares, would be Rs. 87.5 per equity share, which at the time of the notice was a premium of 10% against a trading price of Rs. 79.6.

Competing narratives around the delisting

‘Corporate simplification’ was the primary reason given by Vedanta to delist from Indian bourses. As an example of this simplification process, the company pointed to the merger which eventually formed Vedanta. In 2012, VRL’s Indian firms, Sterlite Industries, and Sesa Goa merged into a single entity, Sesa Sterlite, which was subsequently renamed Vedanta limited. This merger allowed VRL to offload $9 billion of its debt to the new entity.

Delisting, the company stated, is the “next logical step” to the simplification process. Vedanta’s notice to the exchanges read,

“[The delisting] will provide the Group with enhanced operational and financial flexibility in a capital intensive business. Vedanta Group maintains its strategic priority of attaining leadership in diversified natural resources, underpinned by growth, while maintaining a flexible capital structure.”

The public shareholders, who at the time of the delisting process held 15.4% of the stake, the company said, would see “an opportunity to realize immediate and certain value for their shares at a time of elevated market volatility.”

Lastly, from a financial perspective, the delisting would align the group’s capital and operational structures, streamline financial obligations, and improve credit metrics.

However, despite the positive earnings for Q4FY20, given the state of the mineral market, the following quarter disappointed, and the looming debt burden, and inter-company loans to finance the delisting, didn’t help the company’s aforementioned delisting goal.

Interestingly, another key reason for delisting, specified by the company, was that it would support an “accelerated debt reduction program in the medium term,” according to its notice to the exchanges.

Financials in a muck

Since the delisting was made public in May, the mining company’s quarterly results turned weak.

In Q4FY20, Vedanta reported a net loss of Rs. 12,521 crores against a net profit of Rs. 2,665 crores in the previous quarter. This was the company’s first quarterly loss in nearly five years. Revenue for the final quarter of the previous financial year was Rs. 19,514 crore, lower by 9% on a quarterly basis, owing to the dipping price of commodities due to COVID-19, and lower volume in the aluminum, zinc, and the oil & gas verticals. EBITDA was lower by 23% on a yearly basis, and 26% on a quarterly basis.

Sunil Duggal, the then interim CEO of the company said during the quarterly earnings call that the outlook for FY21 was “volatile” adding that the company’s consumers were either reducing or closing down production across geographies.

Vedanta delisting is familiar because its ultimate parent company VRL delisted from the London Stock Exchange (LSE) two years ago. In July 2018, the Anil Agarwal owned Volcan Investments which held a 67% stake in VRL, had decided to take the company private by acquiring the additional 33% public stake.Similar reasons were given to VRL’s delisting, with Agarwal stating the reverse IPO is a “natural progression” for the company to simplify the group structure.

However, at the time of VRL’s delisting, the company was facing severe public backlash. In May 2018, protests erupted at VRL’s subsidiary Sterlite Corporation’s copper plant in Tuticorin, Tamil Nadu. Villagers in the vicinity of the plant complained of suffocation due to the release of toxic gas and were protesting the expansion of the plant. Eventually, the protestors and the police clashed, resulting in the death of 13 people. Incidents similar to the one in Tuticorin were occuring in other VRL owned plants across the world.

One of the reasons cited by those in the know for the company’s delisting from the LSE was Agarwal’s alleged desire to avoid public scrutiny that comes with being publicly listed. Richard Harkinson, research associate for the London Mining Network wrote at the time of its LSE delisting,

“It is delisting essentially because its major shareholder and chair/actual CEO Anil Agarwal wants to avoid any more public interest litigation in the UK by those suffering from the impacts of Vedanta’s projects, such as that by farming communities in Zambia where Vedanta operates copper mines and a smelter.”

Regardless of the reasons for its delisting, VRL successfully delisted from the London Stock Exchange on October 1, 2018. Agarwal’s Volcan Investments announced the successful buyout of VRL’s public shares as another protest erupted outside the company’s annual general meeting in London.

As mentioned above, in the company’s letter to exchanges, the promoters mentioned an offer price of Rs. 87.5. According to brokerages, this offer price was at a discount of 21% against the current market price (CMP) at the close of the June quarter, and a 41% discount to the FY20 book value per share, thus the forward price discovery for a new offer price would likely take place at a higher valuation. Estimates from Motilal Oswal suggested that the SOTP-based target price should be Rs. 114 per share, a 30.2% premium from the offer price.

Stakeholders Empowerment Services (SES), a corporate governance advisory company, in their report on Vedanta’s delisting fiasco, stated that the “offer price given by the promoters [of Vedanta], was unfair and opportunistic. Investors must ignore the same.” The advisory company alleged that the promoters have “tried many tricks to keep expectation of public shareholders muted,” in turn depressing the offer price because the shareholders “believe in the future of the company.”

The “tricks” employed by Vedanta Resources, the main promoter of the mining company, were mainly according to this report, to write-off Rs. 17,400 crores in impairment of assets in oil & gas, copper, and iron ore businesses, putting the consolidated book value at Rs. 89.3 per share.

SES added that each Vedanta share represents 0.74 shares of Hindustan Zinc, a subsidiary of VRL, which is valued at over Rs. 145, stating that “the minimum price is Rs. 145 if one takes all other Vedanta assets at ZERO, which is not the case.”

All these factors suggest that the offer price isn’t merely undervalued as part of the delisting, but it’s intentionally lowered to make the reacquisition cheaper for the promoters. The report concluded,

“SES is of the view that promoters are trying to take advantage of the present crisis, depressed prices and testing wisdom of the harried investor who is wounded badly and nursing his losses of all asset classes.”

In fact, SES puts the average price per share of Vedanta at more than three times the offer price, at Rs. 310 per share based on the company’s book value per share and EPS, and the industry’s P/BV and P/E multiple.

With Vedanta’s promoter’s offering a price significantly lower than valuations, it’s no wonder that there was a huge gap in shares tendered by the public. The shares offered to the promoters ranged between the offer price of Rs. 87.5 to as high as Rs. 999 per share, a 103% premium against the company’s lifetime high. 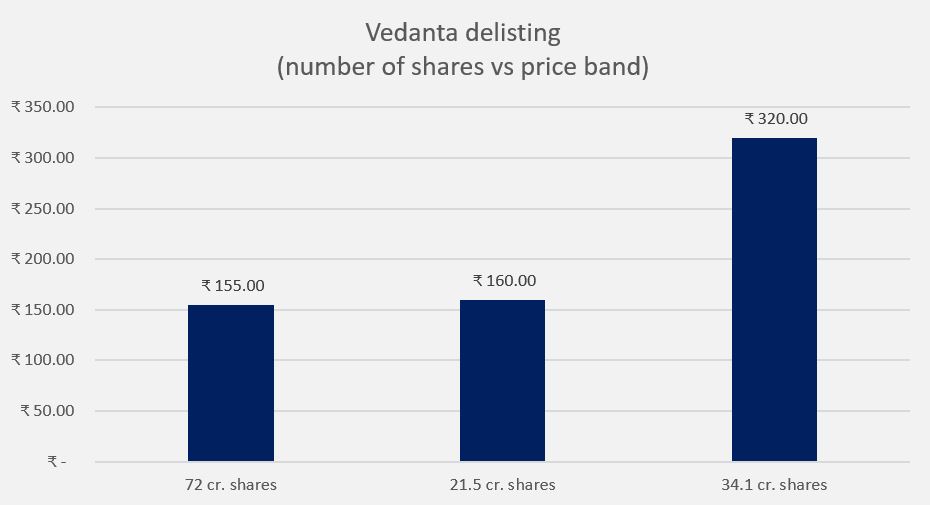 Following the close of trading and an extension given to the mining company on October 9, the final day of bidding, Vedanta’s delisting fell short.

The reacquisition cut-off not met at the end of the bidding window, Vedanta’s delisting was off the table, and on October 12, its share price tanked by 20%.

Walking back the debt

While the delisting was shelved, the debt burden remained. It was revealed via the company’s filings that three months prior to the delisting offer being made public, Vedanta agreed to provide loans and guarantees of Rs. 7,900 crores to its parent company Vedanta Resources. Of this Rs. 2,311 crores had been from Cairn India Holdings, a subsidiary of Vedanta, to VRL.

Emkay Global, referring to Vedanta’s treatment of this provision as cash in its books stated, “we believe [this] is not the best way of accounting loans given to parent.”

Besides the debt, there’s the question of cash. Hindustan Zinc, another subsidiary of Vedanta is awash with cash surplus of over Rs. 15,500 crores, but this cannot be accessed directly, at least not with its parent company traded publicly. Speaking to ET Prime, an anonymous Vedanta group watcher said,

“The main issue of delisting was to access the cash of Cairn and Hindustan Zinc to pay off lenders at holding company and listed entities. But post-delisting, Agarwal can mobilise funds and deleverage by dividend pay outs or loans, or asset sales. Dividends now will have significant leakage since half of Vedanta’s equity is held by public shareholders as it also tax inefficient.”

Vedanta’s delisting ordeal may have revealed a lot more than the company wanted. From its true per share valuation and debt burden to its promoter’s desire to privatize profitability and move around numbers in the financial statements to reflect just that. For now, however, it seems VEDL will continue to trade on exchanges, but with its heavyweight promoter’s desire to exit the public eye, and having done so once before in the UK, and aiming to do the same in the US, this won’t be Vedanta’s last effort to delist from Indian exchanges.