The Baseline Hi, alerts will be available as mobile notifications soon. We are also making them available on browser. SMS: not in plan
09 May 2021  Like
manubhai_353
06 May 2021
Your are not replying to our email. I have emailed you more than 5 times in last 5 months but not single reply came.
Share
Share on Maruti Suzuki wades into an uncertain FY22, learning from the early FY21 washout

The beginning of FY21 was unusual for Maruti Suzuki. Its plants were shut down for many weeks into the June 2020 quarter, wholesales went kaput, and the company then started operating its plants post unlocking of the economy at a meagre scale. This was because there was uncertainty about the resurgence of demand for cars.

Then in the run up to the festive season, the dispatches of cars to dealers rose, which allowed the company to slowly ramp up its capacity. By the end of FY21, Maruti Suzuki had order backlogs of 2 lakh units, and channel inventory was around 90,000 units. This is significantly lower than the over 3 lakh units the company usually has in its channel inventory.

Add to this the advancement of the maintenance shutdown of its plants in Haryana, including Suzuki Motor Gujarat’s plant for nine days. The management still has hopes for a rural demand-led surge in dispatches, because lockdowns in nine states contributing around 35% of its revenues will make a huge dent in demand from urban areas.

We try to look at the company’s FY21 performance to read the tea leaves of what could happen in FY22, considering we are entering the new financial year under a similar cloud of lockdowns.

The financial year 2020-21 had all the complications that most businesses can’t handle. For a company that sells cars, it is all about customer sentiment, especially because the product is a discretionary purchase.

With the revival in demand after the first 6-8 weeks of the lockdown in FY21, Maruti Suzuki saw a surge in wholesales due to pent-up buying for customers, especially in the personal mobility space. In many cities, cab aggregators were operating on curtailed capacity, and public transport was still not up and running due to fears of aggravating the spread of the pandemic. 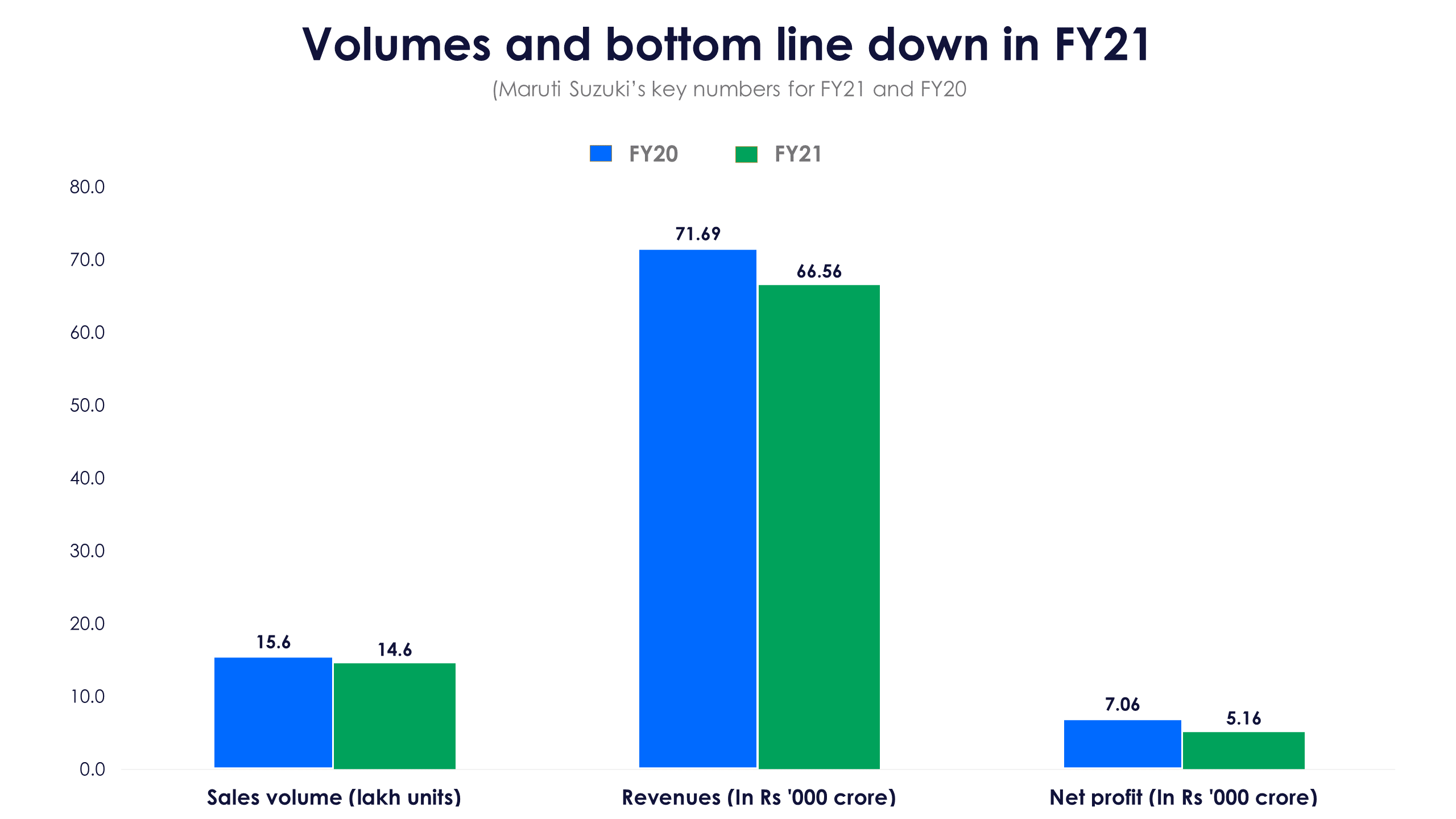 As soon as purchasing power returned to customers, retail sales picked up as well, but as the pent-up demand outstripped supply, there were looking at waiting periods for cars post the festive period.

To get a sense of the recovery, despite selling cars only for 10.5 months, Maruti Suzuki clocked wholesales equivalent to FY16. Keeping this in mind, the fall in net profit and revenues look less concerning. If the new lockdown doesn’t have a severe impact on people’s spending habits and incomes, there could be a resurgent demand in cars once states unlock. 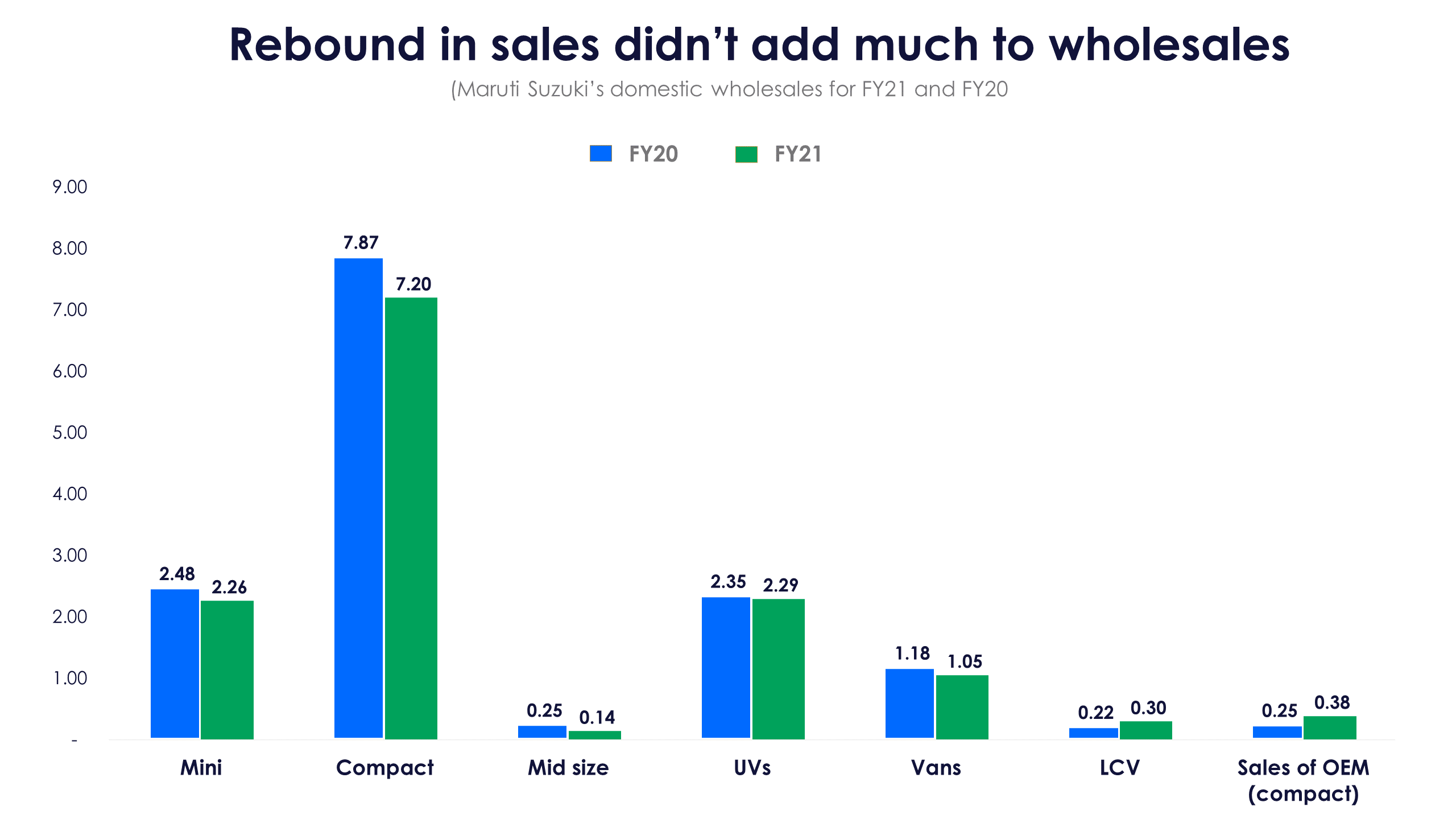 The demand for cars from first time buyers in FY21 is what bodes well for car makers like Maruti. Over the past year, the share of first-time buyers rose to 3.5% of its total cars sold in India. This made up for a fall in replacement demand by 7%, with help from additional car buying rising to 33% (vs 31% in FY20).

What this means is that those who already have cars are buying new cars for another member of the household, and first-time owners are making the switch to cars due to the need for work travel. If incomes don’t fall considerably over FY22, some of these trends may persist.

Uncertain FY22 ahead with lockdowns in play

There has been the niggling issue of shortage of semiconductors across the world, which has led to an increase in raw material prices. Add to this the rise in metal prices, and the company had to take two price hikes from the beginning of the year 2021 (January 2021 and April 1, 2021). The fall in EBIT margins in FY21 was solely down to the rise in raw material prices.

Fortunately discounting is down, and the company has enough orders to fulfill over the next month or so. It will be difficult for investors to judge whether sales of cars will return to the high growth seen nearly five years ago. Ironically, Maruti Suzuki’s yearly sales at the end of FY21 are at the same level as that five years ago.

At the time, the Indian economy was booming at around 8% real GDP growth, and there was a spike in personal and shared mobility needs of various customers who are riders of cab aggregators. Right now, with high fuel prices, the only silver lining is the over 50% growth in the CNG versions of its existing models.

The company has promised to add more models to the CNG bandwagon. But the base is too low, and the outlook for the rest of the product stable is hazy. Investors will have to buckle up for the bumpy ride ahead.