BSE India
We enclose a certificate from the Practicing Company Secretary under Regulation 40 (9 & 10) of the Listing Regulation, 2015 for the period from 1st July, 2020 to 30th September, 2020.
Share
Share on

BSE India
Certificate under Regulation 74(5) of SEBI (Depositories and Participants) Regulations 2018 for the period from 1st July, 2020 to 30th September, 2020
Share
Share on

Business Line
The stock of Cholamandalam Investment and Finance Company advanced 3.4 per cent on Thursday, breaking above a key short-term resistance at 250 level.
Share
Share on

BSE India
We also wish to inform you that the 'Trading window' of the Company is closed for 'Designated Persons' of the Company from 1st October, 2020 till 31st October 2020 (both days inclusive) in connection with the above impending publication of unaudited financial results. We request you to kindly take the above on record.
Share
Share on

Cholamandalam Investment and Finance Company Ltd - 511243 - Board Meeting Intimation for Intimation Of Board ...

BSE India
Cholamandalam Investment And Finance Company Ltdhas informed BSE that the meeting of the Board of Directors of the Company is scheduled on 29/10/2020 ,inter alia, to consider and approve We wish to inform you that a meeting of the Board of Directors of the Company is scheduled to be held on Thursday, the 29th October 2020 to inter alia consider and approve the unaudited financial results of the Company for the quarter and half-year ended 30th September 2020. The Company will publish and submit the unaudited financial results as required under Reg.33 of the Regulations. Further, please note that pursuant to Reg.47 (1)(a) of the Regulations, we are taking steps to issue a public notice in English and in regional language. We also wish to inform you that the 'Trading window' of the Company is closed for 'Designated Persons' of the Company from 1st October, 2020 till 31st October 2020 (both days inclusive) in connection with the above impending publication of unaudited financial results. We request you to kindly take the above on record.
Share
Share on Murugappa Group, a stalwart family-owned business dynasty is caught up in a rather typical Indian drama. At the center of this controversy is a Rs. 380 billion 120-year old business empire, the eldest daughter of the former chairman, and a board that she alleges does not want her to fulfill her late father’s wishes.

In an astonishing turn of events, the family denied inducting her on the board of her father’s company. Arunachalam claims this is a case of long-instilled sexism, which is preventing the first female member from stepping onto the board of a historically male-dominated family business.

Since her father’s death in 2017, Arunachalam has been waging a battle against the branches of the Murugappa family for a seat on the board of the holding company or a potential buy-out of her ownership. In the two years since MV Murugappan’s passing, his daughter has been looking to sell her family’s stake in the group but has been told that the board does not have the money, and instead, she should keep the shares and collect the dividends.

Following no end to this settlement, in August 2019, Arunachalam asked the company for board representation, which was denied. She has also claimed that her family and the senior management of the Murugappa Group has not had any discussions to sell the former’s stake to a potential third party. Arunachalam, along with her mother and sister, holds an 8.1% stake in Ambadi Investments.

The family feud between Arunachalam and the Murugappa Board heated up when she publicly stated her apprehensions about remaining invested in the family. In response, the chairman of the Murugappa Group, MM Murgappan called the situation ‘unfortunate’ and said that it will be dealt “with standards of good governance.”

India's Supreme Court gives daughters the same rights, but the Murugappa board disagrees

After last month’s Supreme Court decision to amend the Hindu Succession Act of 1956 giving daughters the same rights as sons in the inheritance of ancestral property, Arunachalam was hopeful of the decision being a sign of things to come for her own ordeal. On September 11, Arunachalam confirmed that the decision to appoint her as a director was on the agenda for the Annual General Meeting (AGM) later in the month.

However, during Ambadi Investments’ AGM on September 21, the board shelved plans of appointing the first female member by an overwhelming majority of 91.3%, constituting all the family board members, opposing the move.

In a statement following the decision, Arunachalam said that she was “shocked” at how the family had “conducted itself.” She added that multiple attempts were made to purchase her stake in Ambadi Investments as per her father’s wishes, but the family refused to settle the matter.

“For more than a year now, I have been asking for a board seat pending the settlement, to make sure our rights are preserved as a promoter and major shareholder. Now, yet again they have made clear their intent of continuing the oppressive and vexatious conduct against us.”

The family feud could escalate from the boardroom to the courtroom very soon. Arunachalam said that she would “definitely pursue justice” taking the legal route if required. She wanted this controversy to be “settled at the family level” but claims that the family is “more concerned about protecting its draconian perspectives and practices.” With the family forcing her hand, she won’t “shy away” taking the matter to the courts.

Arunachalam stated that the family’s opposition to her appointment is because she is a woman arguing that the male-dominated family company cannot understand “what contributions women can make.” She added, “It is [a] clear indication that gender bias exists at the highest levels of the Murugappa group.”

According to the Hindu Succession (Amendment) Act of 2005, the eldest female daughter can take the place of ‘karta’ of the Hindu Undivided Family (HUF) business, and female members can be considered as coparceners or members of the business. Legally, Arunachalam is the ‘karta’ of the family being the oldest child of the late patriarch chairman MV Murugappan.

Her statement also questions why a female successor with a doctorate degree and 24 years of work experience cannot be inducted into the board, but a 23-year old male heir with a master’s degree and no job-experience can. The latter part of her comparison was directed at the current executive chairman of the Murugappa Group, MM Murugappan who she claimed was inducted into the board of Ambadi Investments when he was 23, three months after his father passed away. During an interview with Bloomberg Quint discussing the issue earlier in the year, she said,

On the issue of gender bias in board positions in Indian family-owned companies, D. Varadarajan, an advocate at the Supreme Court specializing in company laws told IANS, “There cannot be any gender discrimination for [a] board berth. Similarly, there cannot be written or any unwritten rules whereby daughters, daughters-in-law, and sons-in-law can be denied board berth, and board membership is reserved only for the male heirs.”

While the controversy around the Murugappa Group does highlight the issue of gender bias in Indian family-owned businesses, data suggests there has been significant improvement in recent times. According to a report by the Thomas Schmidheiny Center for Family Enterprise at the Indian School of Business (ISB) shared with ET, the number of female directors in standalone family firms (SFFs) rose from 5.6% to 15.2% between 2013 to 2017, and their proportion in family business group affiliated firms (FBGFs), of which the Murugappa Group is an example, rose from 4.6% to 13.7% in the same time. This is a small improvement, but in the right direction. 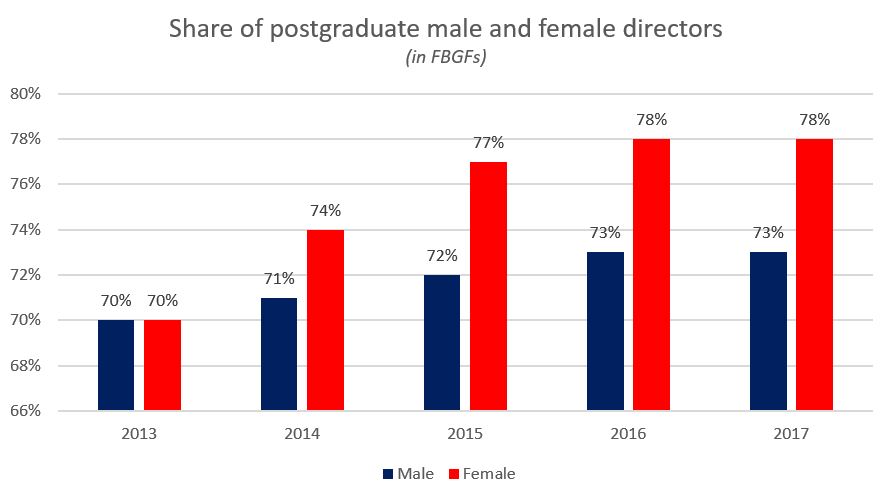 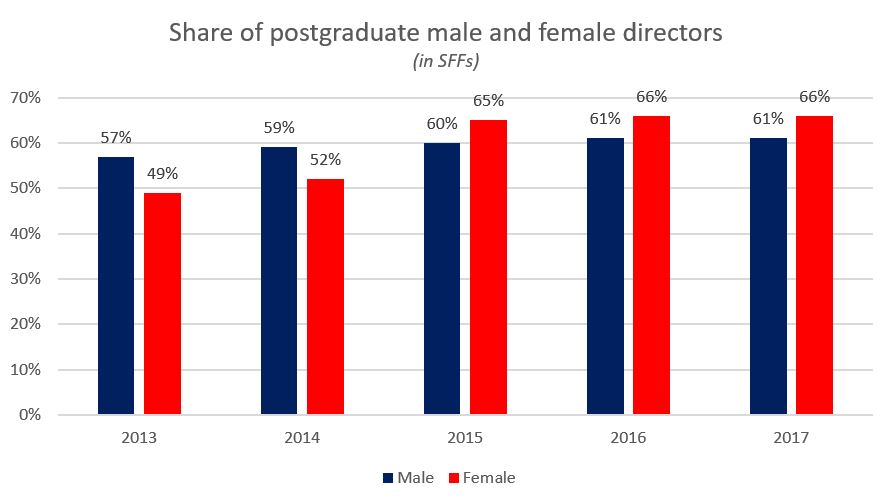 However, while the proportion increased, the education of women directors coming from within the family has stagnated. The report pointed out that between 2013 to 2017, women directors from the family with a postgraduate degree remained at 42% for SFFs and dropped from 58% to 49% for FBGFs. When considering women directors from within and outside the family, they are not just equalling their male counterparts but exceeding them as well. The report found that between 2013 to 2017 for SFFs and FBGFs, the proportion of female postgraduate directors in family firms overtook the male number. In 2013, SFFs had 57% male and 49% female postgraduate directors, and in 2017 that number increased to 61% male and 66% female. For FBGFs, the number increased from 70% for both sexes in 2013, to 73% male and 78% female in 2017.

Gender equality is certainly moving forward in the Indian family-owned business landscape with increasing female representation. However, the ongoing Murugappa Group controversy seems to paint over this progress with the case of Arunachalam and the 120-year old empire. With the board outrightly denying her a place and providing no recourse for selling her stake or representation in Ambati Investments, is this family feud heading for a legal finale?

BSE India
We wish to inform you that the Nomination and Remuneration Committee of the Company has approved allotment of 9,200 equity shares of Rs.2/- each to an employee who has exercised his options under the employee stock option scheme. The Company will be applying for the final listing of the above shares on NSE and BSE to complete the rest of the issue formalities. Kindly take the above on record
Share
Share on